Baden-Powell, Chief Scout of the World

A colourful career with the Army, followed by the founding of the Scouting movement...

The 1911 census for the Isle of Man has now been added to the Diamond subscription on TheGenealogist, and includes Robert Baden-Powell, the founder of the Scout movement, staying at the home of the Lieutenant Governor George Fitzroy Henry Love Ragdan.

Robert Stephenson Smyth Powell was born on 22nd February 1857 in Paddington to the Reverend Baden Powell, Professor of Geometry at Oxford University, and his wife Henrietta Grace Smyth. He was named after his god-father, Robert Stephenson, a civil engineer and son of the famous railway engineer George Stephenson, whose face appeared on the £5 bank notes from 1990 to 2003.

Reverend Powell died when Robert was three years old, leaving Henrietta to raise their seven children alone. As a tribute to their father she changed the family name to Baden-Powell.

Robert attended Rose Hill School in Tunbridge Wells and was awarded a scholarship to the Charterhouse Public School in Surrey. He began developing early scouting skills in Surrey whilst hiding from teachers in the woods, and was also involved in many other activities such as acting, playing the piano and violin. He was a keen artist and also spent many holidays canoeing with his brothers. Records of students who attended the Charterhouse School can be found on TheGenealogist, providing year of birth and death with details of occupations and notable achievements. 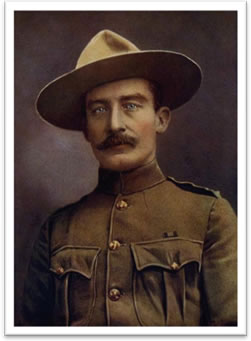 Baden-Powell 'Celebrities of the Army' 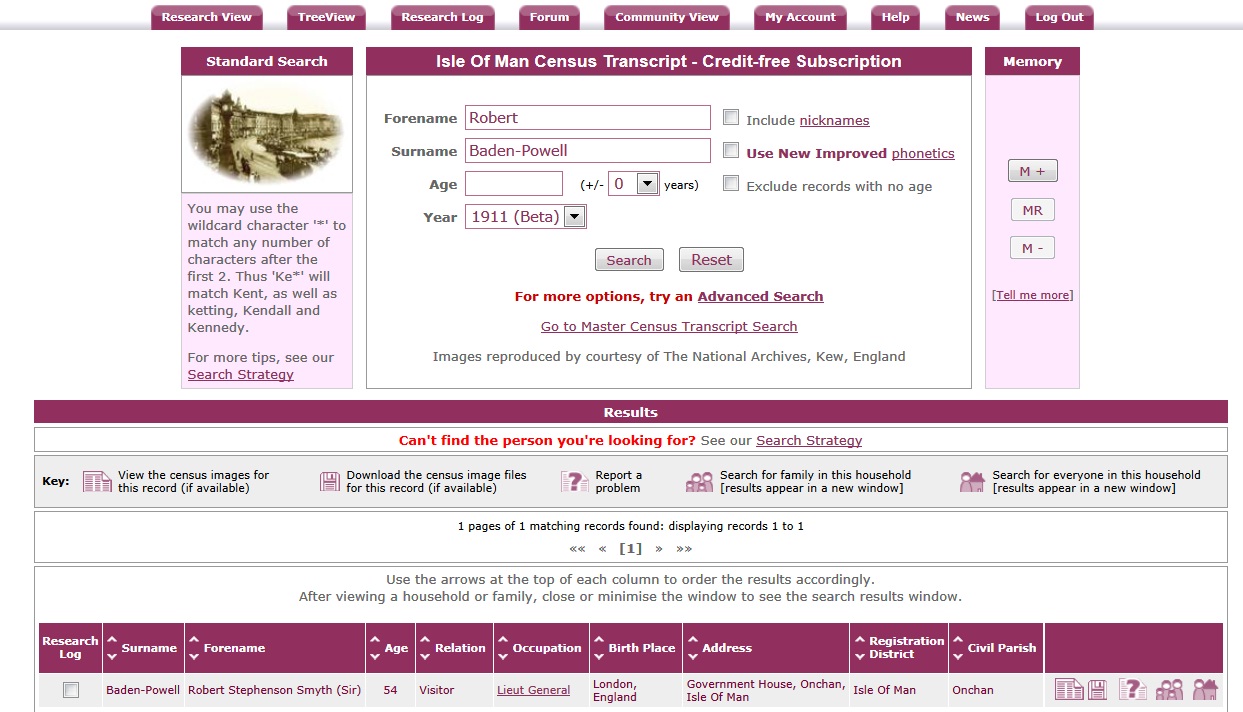 In 1876, he joined the 13th Hussars of India as a Lieutenant and his regiment was sent to the Natal Province in South Africa, where he was able to develop his scouting skills in campaigns against the Zulu's. He was promoted to Military Secretary and Senior aide-de-camp to his uncle, General Sir Henry Augustus Smyth, the Commander-in-Chief and Governor of Malta, and was posted to Malta for three years. 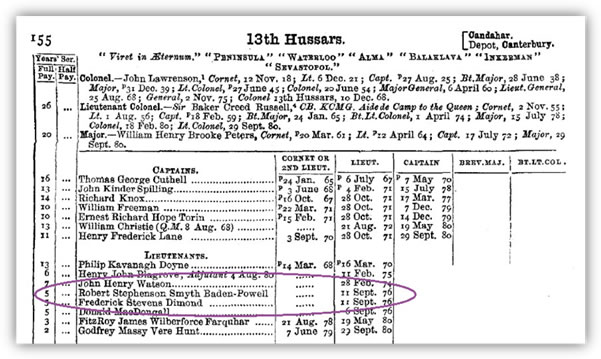 He also carried out Intelligence work and posed as a butterfly collector with plans of military areas hidden in his sketches of butterfly wings.

Baden-Powell's sketches of a moth head, and the military areas hidden within the picture. From the book My Adventures as a Spy by Sir Robert Baden-Powell, published 1915.

Baden-Powell's sketches of a butterfly, and the hidden areas in the sketch

This sketch of a butterfly contains the outline of a fortress, and -marks both the position and power of the guns. The marks on the wings between the lines mean nothing, but those on the lines show the nature and size of the guns, according to the keys below.

Baden-Powell returned to Africa in 1896, as the British South Africa Company was under siege during the Second Matabele War, and it was here that many of his ideas for the Boy Scouts were born.

Scouting is another term for reconnaissance, which involves going into enemy territory to gather information about the enemy forces and the surrounding environment. Whilst leading reconnaissance missions he met American scout, Frederick Russell Burnham. Burnham taught him about the American Old West and he began wearing the iconic Stetson campaign hat and kerchief.

After the campaign in Rhodesia, he was sent to West Africa where the Fourth Ashanti War was underway, and in 1897, at the age of 40, he was promoted to lead the 5th Dragoon Guards in India. He then decided to write his 'Aids to Scouting' manual, which was a summary of the lectures he used to train recruits, which taught them to use their initiative, think independently and survive in the outdoors. He received a further promotion, making him the youngest Colonel in the British Army, and returned to South Africa for the Second Boer War. 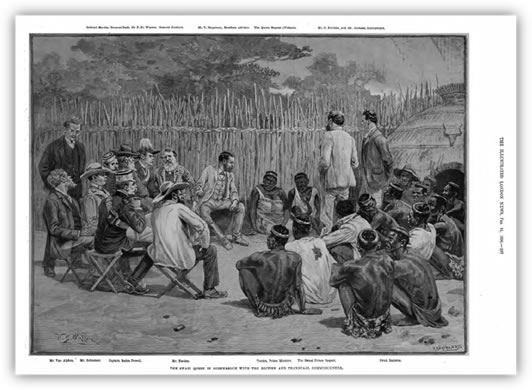 During the War, Robert was involved in the Siege of Mafeking where the British forces had been surrounded by up to 8,000 Boers. The Siege held up for 217 days and is the most celebrated operation in Baden-Powell's military career, as the success was largely down to his deception tactics. He arranged for fake minefields to be planted, and ordered soldiers to act as if they were avoiding barbed wire when moving around the trenches. He also sent vehicles down the rail track into the centre of Boer camps, loaded with skilled shooters.

During the siege there were also groups of young cadets who were used to fill minor positions such as standing guard and sending messages to allow the adult men to participate in more important roles. Baden-Powell used the young boys as the subject of the first chapter in 'Scouting for Boys' as an example of bravery and courage.

The siege was lifted in May 1900 and Baden-Powell became a national hero with a further promotion to Major-General. 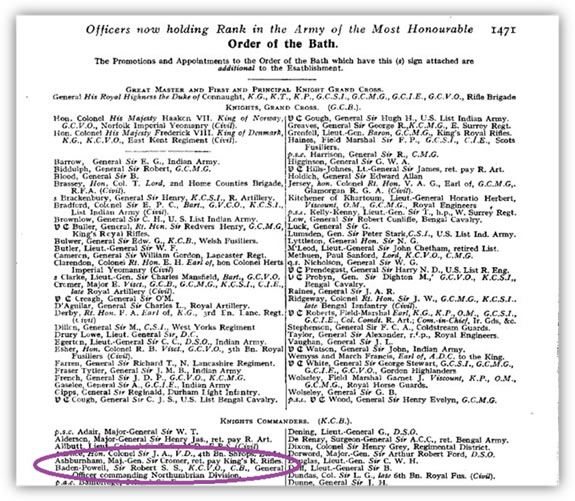 Baden-Powell returned home in 1903 and retired from the army in 1910 on the advice of King Edward VII who believed he should focus all his energies on the Scouting movement. His book 'Aid to Scouting' had become a national best-seller, used by teachers and youth groups around the country. Baden-Powell decided he would re-write the book making it suitable for younger readers, which became the famous 'Scouting for Boys'. Originally published in 1908, this became the fourth best-selling book of the Twentieth Century, selling over 150 million copies.

In August 1907, Baden-Powell held a camp on Brownsea Island, for his friends' sons and members of local groups, to test out his scouting ideas. The camp was influenced by the Woodcraft Indians, an America youth program founded by Ernest Thompson Seton. Various Scout groups then began to emerge around the country and it became a national and international movement. A London rally was held in Crystal Palace in 1909, where Baden-Powell also discovered the first Girl Scout group. He appointed his sister Agnes to lead a scouting movement for girls, which became the Girl Guides and sent his friend Juliette Gordon Low to American where she established the Girl Scouts of the USA. The first World Scout Jamboree was held in 1920 in Olympia and Baden-Powell was named as Chief Scout of the World.

In 1921 Baden-Powell was made a Baronet, and became the 1st Baron Baden-Powell. He is recorded in various books in the Peerage and Heritage collection on TheGenealogist, as well as Military records, such as 'Armorial Families'. Peerage records often contain short biographies and can provide useful information for family history researchers.

Family life was also important to Baden-Powell, and he met his wife Olave St Clair Soames in January 1912 onboard the Arcadian, whilst travelling to New York for a scouting world tour. At 23 years old, she was 32 years younger than Baden-Powell and they were engaged in September of the same year.

As a result of his worldwide fame, they married in secret on 31st October 1912 in Parkstone, Poole. The couple had three children; Arthur, Heather and Betty, and from 1919 to 1939 they lived at Pax Hill in Hampshire, in a house which was a gift from her father. Olave's sister also died in 1919, so they adopted her three children and raised them as their own.

They moved to Kenya in 1939, and Baden-Powell died here in January 1941. His grave in Nyer is a national monument, and when Olave died her ashes were sent to Nyer and placed beside her husband.

Baden-Powell had a massive influence on youth education and by 1922 there were over a million scouts across 32 counties. By 1939 this had risen to over 3.3 million. He received many awards during his lifetime both British and International, and was nominated frequently for the Nobel Peace Prize.

In Nepal, they renamed the Urkema Peak to Baden-Powell Peak to celebrate the 2007 Scouting Centenary, and in California, Major Frederick Burnham dedicated Mount Baden-Powell in 1931 to his scouting friend. The adjoining peak was later named Mount Burnham to honour the friendship between the two men. 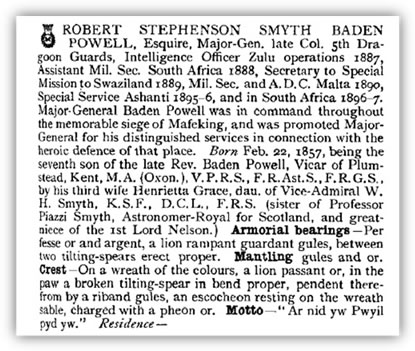 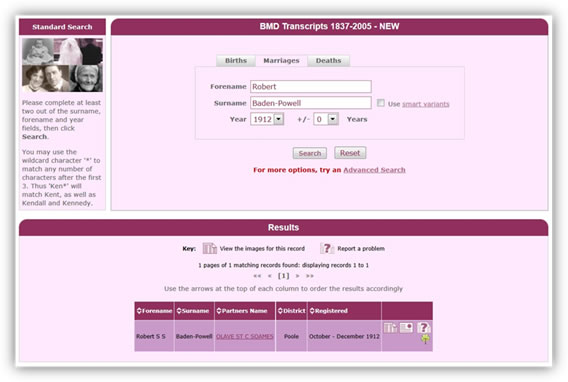