BBC launching new series of Who Do You Think You Are?

The latest series of BBC's 'Who Do You Think You Are?' begins on 10th August with more famous faces exploring their ancestry. Past episodes have been emotional, heart warming and at times shocking, and it looks as though the new series will be just as gripping.

This year's line up includes:

The series begins with JK Rowling, whose mother Anne Volant, born in 1945, was the grand-daughter of French born Louis Volant. Census records are a great way to trace ancestors who were born overseas and emigrated to the UK, with Louis and his Suffolk born wife Eliza Smith seen below on the London 1901 census.

TheGenealogist.co.uk provides access to census transcripts with unique search tools and original images, from 1841 to 1901 with 1911 being added throughout 2011.

Census records are also useful for tracing people in the workhouse, which is where Len Goodman sadly finds many of his ancestors. Len's ancestors also include a grocer, fruit and vegetable seller and bricklayer. With the Keyword Master Search on TheGenealogist, you can search for any details that you know about your ancestors, so you could enter "bricklayer London", and view records of all individuals that match your search. 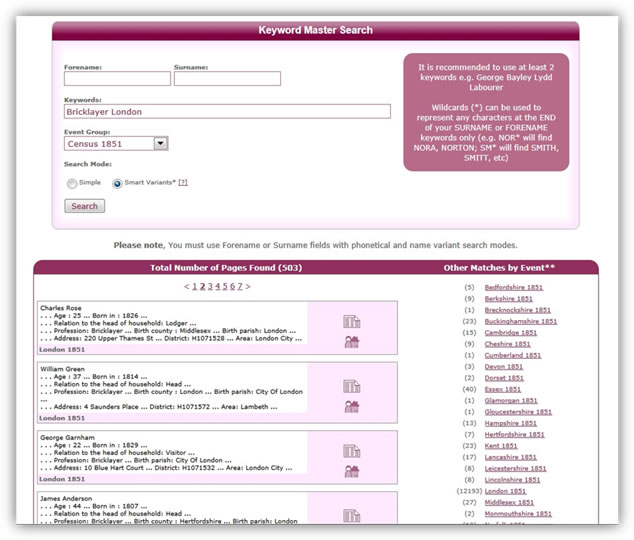 Searching for a bricklayer in London

Emilia Fox discovers that acting is rooted firmly in her blood, with several generations of her family tree involved in the theatre and music halls. The occupational records available on TheGenealogist are very valuable resources for tracing ancestors linked to specific trades. For those with links to acting and the theatre, the 'Biographia Dramatica' provides biographic records of actors, playwrights and their works from the 1500s to 1811. Information includes background history and a record of their individual works with dates. Also available is 'Who's Who in the Theatre 1922', where Emilia's great grandmother Hilda Hanbury and great-aunt Lily Hanbury are recorded (below).

Bee Gee Robin Gibb, who was born on the Isle of Man will be investigating the role his ancestor played in the 19th Century War in Afghanistan, so may prove a useful episode for people researching military ancestors. TheGenealogist has a large collection of Army and Navy Lists ranging from 1661 to 1944, overseas military BMDs, Militia Lists, Rolls of Honour and Regimental records.

The series also provides some intriguing stories with Alan Carr looking into why his maternal great-grandfather had to change his name, and Larry Lamb finds out for the first time who his mother's biological family are, as his mother Jessie White was given up for adoption. An adoption search service is currently available to subscribers on TheGenealogist, which allows you to locate entries on the Adopted Children Index. The Adoption index was created in 1927 and provides the reference number needed to order an Adoption certificate

Over the next few weeks we'll be adding the trees of the celebs to TreeView, our free online family tree building program, so you can explore their ancestry. We'll also be providing our own look into the lives of the celebs each week, with details of records found online and through TheGenealogist.

Click here for a preview of J K Rowling's tree