He was known by many for his womanising, similar to his fictional character James Bond...

The Oxfordshire 1911 census is now available on TheGenealogist and includes James Bond author, Ian Fleming. As the focus around the country turns to our brave ancestors who fought in the First World War and we pay our respects to those who sacrificed everything, they are never far from a family historian's mind, as discovering the role our ancestors played in key events of the past is always an important part of our research. Ian Fleming's father Valentine died in France in 1917 and his younger brother Michael died in World War Two, so he was all too familiar with the cost of war, but he played a vital role of his own, as part of the Naval Intelligence for the Allied Forces in World War Two. 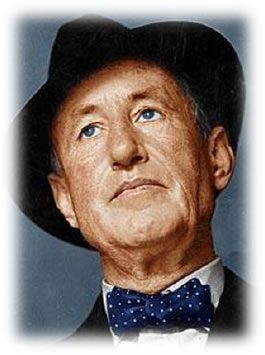 Ian Fleming was born on 28th May 1908 to barrister Valentine Fleming and his wife Evelyn Rose. He had three brothers Peter, Michael and Richard, and after the death of his father in the First World War, a half sister Amaryllis. His father Valentine was the son of Scottish merchant banker Robert Fleming, founder of JP Morgan Chase, and his uncle Philip Fleming won a Gold medal in rowing at the 1912 Stockholm Olympics.

His education started at the Durnford School on the Isle of Purbeck in Dorset, which was located near the estate of the Bond family. It is believed that Fleming's inspiration came from a member of this family, John Bond, who acted as a spy for Elizabeth I. The family's motto is 'Non Sufficit Orbis' which translates as 'The World Is Not Enough'.

Ian Fleming with his family on Oxfordshire 1911 Census

After Durnford, Fleming attended Sunningdale School in Berkshire, then Eton College. After leaving Eton he enrolled at the Royal Military Academy, Sandhurst, but found military life difficult so his mother instead sent him to learnt language skills. He first went to Austria, where he learnt German, then to the University of Geneva to learn French. After completing his studies he initially tried to join the Foreign Office but his application was turned down, so he started his career in journalism and joined the Reuters News Agency in 1929. Reuters sent Fleming to Moscow, a city filled with spies and secret police, which may have inspired the future Bond story 'From Russia with Love', and in 1933, he covered a trial of six British engineers accused of spying. Reuters tried to transfer Fleming to the Far East, but he needed a more profitable income so instead went to work in London as a stock broker for Rowe and Pitman.

When war broke in 1939, he was head-hunted by the Naval Intelligence Department due to his skills and knowledge in both language and finance. He initially travelled with the Director of Naval Intelligence, Admiral John Godfrey, as his assistant and was given the codename 17F. Godfrey was most probably the inspiration behind the character of 'M' in the Bond novels, and Fleming learnt a great deal during their time together. Much of their work was classified information, helping assault groups to obtain enemy codes and secret equipment. Fleming's energy, organisational skills and creativity made him invaluable to Naval Intelligence and he was promoted to Lieutenant, Lieutenant Commander and later Commander. He had a useful network of contacts drawn from his previous experiences as a journalist at Reuters, as a stockbroker in the City, from the world of Intelligence and his communications with the Foreign Office. Godfrey wanted Fleming to share this private cell with the Intelligence department, but Fleming would never reveal the identity of his sources.

Fleming was responsible for planning many important operations during the Second World War including 'Operation Goldeneye', which involved monitoring Spanish activity in the Mediterranean and maintaining communications with Gibraltar, in case Spain decided to join the Nazi forces and launch an invasion against Gibraltar.

'Operation Mincemeat' was another important contribution, deceiving the Germans into believing that they had intercepted top-secret information and the Allies were about to invade Greece and Sardinia, which helped to disguise the real invasion of Sicily in 1943.

After the Second World War, he was offered the position of foreign manager by his friend Lord Kemsley, who owned The Times and Sunday Times, and he was able to take eight weeks off each year to spend at his house in Jamaica. Fleming had fallen in love with Jamaica after attending a U Boat conference there in 1942. The estate was named 'Goldeneye', and it was here that all the Bond novels were written.

He wrote his first novel 'Casino Royale' in the run up to his wedding in 1952, and has always joked that it was a necessary distraction from his forthcoming marriage commitment.

Fleming met his wife Anne Charteris when he was in his twenties, and she was then married to Irish Peer Shane O'Neill. He was known by many for his womanising, similar to his fictional character James Bond, but Ann was beautiful and intelligent and Fleming was instantly drawn to her. Ann's husband was killed in the Second World War, and she then married the press baron Lord Rothermere.

After falling pregnant with Fleming's child, she divorced Rothermere and finally married Fleming in Jamaica in 1952, which was witnessed by their close friend Noel Coward. They had one son together, Caspar, also born in 1952. 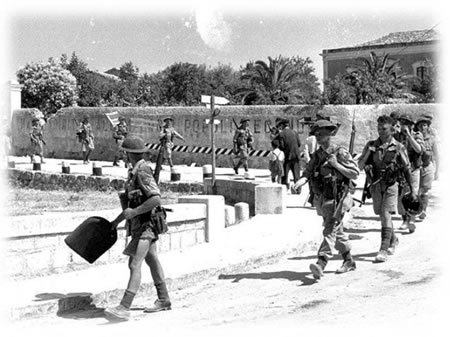 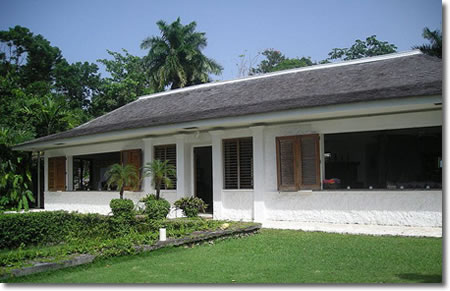 At the age of 53, Fleming had a heart attack and was told to stop working and rest. During this time he decided to write a story for his young son about a magical car called 'Chitty Chitty Bang Bang', which became another of Fleming's legacies. He suffered a further heart attack in 1964 and died on 12th August. He is buried in Sevenhampton near Swindon in Wiltshire.

Fleming's father Valentine was from Fife and became a Conservative MP for Henley in 1910. In 1914 he joined the Queen's Own Oxfordshire Hussars to fight in the First World War, but was killed by German bombing in May 1917 at the Guillemont Farm area of Picardy, and posthumously awarded the Distinguished Service Order. TheGenealogist.co.uk has an extensive collection of Roll of Honour Records to help you trace ancestors that served in the First and Second World Wars.

Valentine Fleming can be seen in the World War One Death Index, Oxford University Roll of Service and also in The Victoria Cross and Distinguished Service Order records. 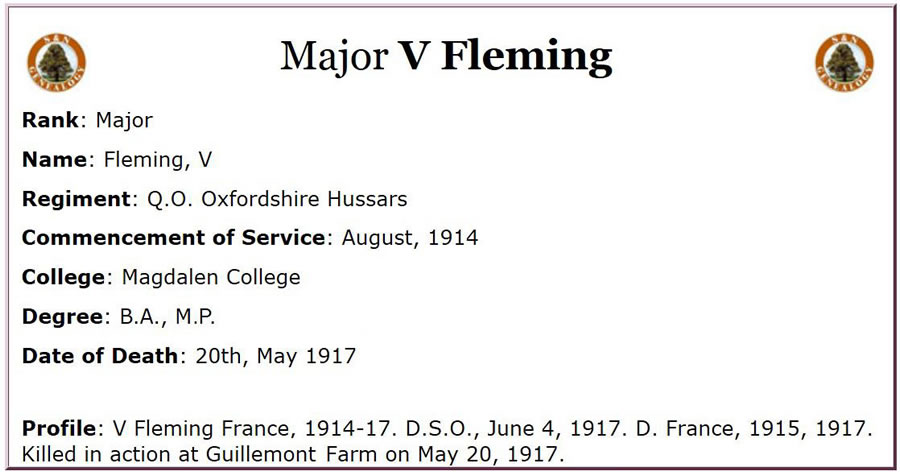 Valentine Fleming in the Oxford University Roll of Service

Included in our collection of Newspapers and Magazines are the 'War Illustrated', a British War Magazine with reports and pictures of events, soldiers and battles during the First World War from 1914 to 1919, and 'The Great War - History of the World-Wide Conflict', which contains 272 issues, full of illustrations and information gathered by a team of war correspondents at the time. Filled with pictures, maps and background detail, each issue has been scanned in full colour. It provides a valuable insight to how the First World War was fought. View our Research Guide for more information on the extensive collection of military records available on TheGenealogist.

As we remember the 15 million people who gave their lives for us in the First World War, remember also the soldiers still alive in the UK today who have fought for us and who still continue to fight for us. The Royal British Legion provides financial, social and emotional support to millions who have served or are currently serving in the Armed Forces, and their dependants. Please make a donation to their cause at www.poppy.org.uk and wear your poppy with pride.