Isambard Kingdom Brunel was born on 9th April 1806 in Portsmouth, to Sir Marc Brunel and his wife Sophia Kingdom. Marc Brunel was a well respected French engineer, who left his home country during the French Revolution to settle in England, and was knighted at Buckingham Palace in March 1841. Marc Brunel provided his son with an extensive education, teaching him basic drawing techniques from the age of 4, enrolling him at the College of Caen in Normandy and later at the Lycée Henri-Quatre in Paris. In 1822, after completing an apprenticeship under a prominent French clock maker, Isambard returned to England and began working at his father's office in London.

One of Brunel's most significant projects with his father's company was assisting in the construction of the Thames Tunnel at Rotherhithe, at the age of 20. The Thames Tunnel was the first tunnel to be successfully built below a river, and later became part of the London Underground network. In 1829, Brunel won a competition to design the Clifton Suspension Bridge in Bristol, and joined the Great Western Railway Company in 1833. He was involved in numerous railway projects during his life, engineering over 1,200 miles of railway, including the main line between Bristol and London, which included viaducts, bridges and tunnels. 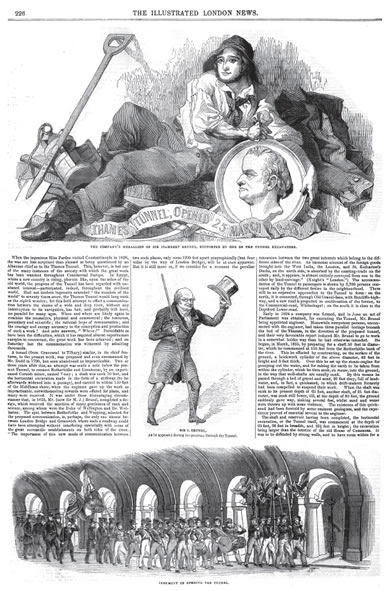 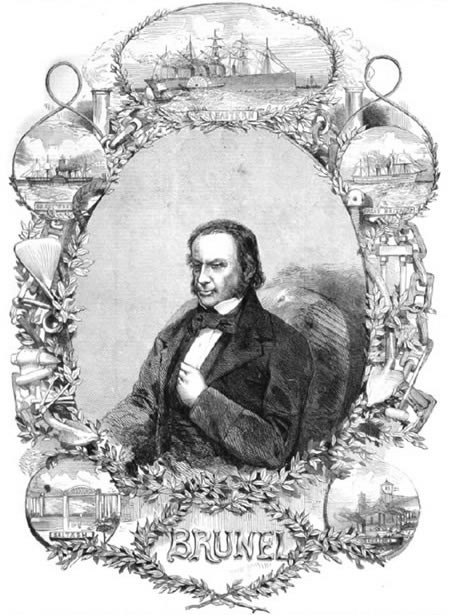 Brunel was also involved in the re-design and construction of several major docks such as Bristol and Cardiff, and became involved in three major ship-building projects with the Great Western Steamship Company, all of which provided a significant development in naval architecture. The first was a wooden ship, the 'Great Western', which was a steam boat that sailed from Bristol to New York and launched in 1838.

The second was an iron ship the 'Great Britain' built in 1843 and was the largest ship in the world at almost 100 metres. It was the first iron screw-propelled ocean steam ship, and was designed as a Trans-Atlantic passenger ship with a capacity of 252 passengers and 130 crew. Its original purpose proved to be unprofitable, and the ship was sold to Gibbs Bright & Co in 1846. There had been an increase in emigration to Australia, fuelled by a new Gold rush, and the SS Great Britain was re-fitted with a new upper deck, increasing its capacity to 750 passengers. Over the next 24 years, the ship carried over 16,000 emigrants to Australia.

The SS Great Britain launched its own weekly newspaper for passengers in 1865, and TheGenealogist has digitised issues of the newspaper, which are now available for all Diamond subscribers. These include interesting details about the ship and its progress, as well as incidents onboard and events such as birth and deaths. The last issue of the journey also provides a passenger list with names of those in intermediate, second cabin and saloon.

The third ship Brunel designed was the 'Great Eastern', and was one of the toughest projects he faced due to the vast size of the ship. It was designed to carry 4,000 passengers without needing to refuel, and once completed took the title of the largest ship in the world. Brunel's health deteriorated during the building of the Great Eastern and he suffered a stroke during the trials prior to the maiden voyage. He died ten days later in September 1859, and is buried in Kensal Green Cemetery in London with his father. 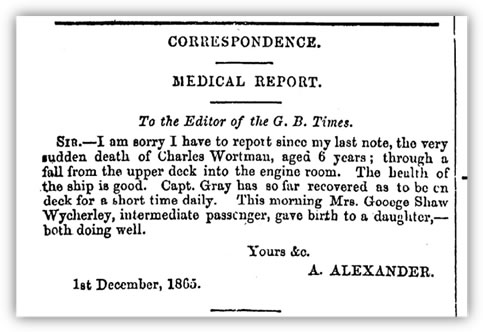 Both Isambard and Sir Marc Brunel are recorded in the Dictionary of National Biography, which reflects their contributions to Great Britain and to the Industrial Revolution. The Dictionary of National Biography, published in 1930, is now available on TheGenealogist as part of the new Biography Records collection. It provides an extensive collection of biographies with details of men and women who influenced the history of the British Isles and around the world. Information recorded can include births, baptisms, marriages and burials, education, details of siblings and other family members. Some entries also give details of parents with important dates in their lives and their occupation.

As well as his engineering achievements, Brunel was also a family man and married Mary Elizabeth Horsley in July 1836. They had three children Isambard Brunel, Henry Marc and Florence Mary. Henry Marc followed in his father's footsteps and also became a civil engineer. The family can be seen on census records on TheGenealogist in 1841 and 1851 at their London home on Duke Street.

Brunel's obituary is recorded in an 1859 issue of the Illustrated London News, which will shortly be added to the expanding collection of Newspapers available to Diamond subscribers on TheGenealogist. The obituary honours the work of Brunel stating that "under his direction all the tunnels, bridges and other works were constructed on that line and its branches and connections... noticeable among the bridges on these lines are that across the Thames to Maidenhead, for the largest and flattest of brick arches; that at Chepstow, for the greatest difficulties overcome in crossing the Wye; and the bridge of the Cornwall Railway over the Tamar, which is, as near as may be, from coincidence of natural causes, of the same span and height as the Britannia Bridge and has a central pier, rising from a depth of 80 foot of water, the deepest yet encountered in railway engineering."

The Illustrated London News also refers to the floating and raising of the Conway and Britannia tubular bridges "operations not less remarkable for their novelty and magnitude than for the friendly co-operation of engineers by whom they were successfully accomplished".

Brunel's funeral was attended by other prominent scientists and engineers, and shopkeepers in and around Duke Street closed their shops and windows as a token of respect for the loss of one of Britain's greatest engineers.