The Story of Bram Stoker and his 'Count Dracula'

Introducing vampires to the Victorian community, that has turned into an obsession a century later... 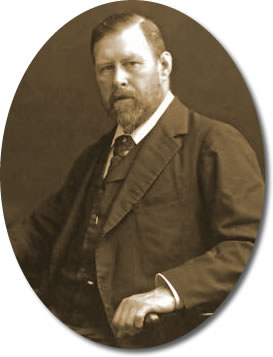 With Halloween upon us again, and the next instalment of the Vampire themed Twilight saga due to be released in November, we're looking at the family history of an iconic figure, Bram Stoker, creator of the infamous Count Dracula. Bram Stoker introduced Victorian society to a world of vampires and started an obsession with the undead that would continue for nearly two hundred years.

Abraham 'Bram' Stoker was born in Clontarf, Dublin on 8th November 1847 to civil servant Abraham Stoker and his wife Charlotte Thornley, a writer and charity worker. He was the third of seven children and suffered frequently from poor health until the age of 7, confined to his bed for long periods of time. His mother often told him horror stories, which may have initiated Stoker's interest in the supernatural.

The family lived at Marino Crescent in Dublin, and Bram's father can be found in the Dublin 1846 Almanach under residential listings and also as an assistant clerk in the Chief Secretary's Office. Almanachs are annual publications containing data and statistics for the area, but many of these also include residential and business listings, similar to those found in directories.

As well as Almanchs, Irish records available on TheGenealogist with a Diamond subscription include wills, directories, army/navy lists, landowner and heraldry/pedigree records.

Bram overcame his childhood health problems and was able to study at Trinity College in Dublin from 1864, and later trained as a civil servant with his father's encouragement. However, Stoker's real passion was writing and he also worked as a freelance journalist. His work included theatre reviews for the Dublin Evening Mail, and it was his review of Hamlet, starring Henry Irving, that led to a firm friendship which changed the course of Stoker's life.

Abraham Stoker in the Dublin Almanach 1846

Abraham Stoker in the Dublin Almanach 1846

In 1878, Irving offered Stoker the position of manager at his Lyceum Theatre in London, where Stoker worked for 30 years and met many influential authors such as Arthur Conan Doyle, Oscar Wilde and William Yeats. His first book was published in 1882, and he wrote 18 books in total, including the famous and iconic 'Dracula', published in 1897.

Shortly after meeting Henry Irving, Bram Stoker met an aspiring actress Florence Balcombe, daughter of Irish Lieutenant-Colonel James Balcombe. She had previously attracted the attention of Oscar Wilde but instead fell for Stoker and the couple were married on 4th December 1878. They moved to London five days later, following Irving's offer to manage his theatre, and had a son one year later on 31st December 1879, named Irving Noel Thornley Stoker.

"His review of Hamlet changed his life..."

Bram Stoker, Florence, and Irving living in London in 1881

Florence's father James can be found in numerous Army Lists available on TheGenealogist, which include regiments from all countries within the UK.

Bram's father Abraham did not approve of his son's theatrical life and was living in Italy at the time of his death in 1876. The death can be found in the Non-Conformist and Non-Parochial Records collection on TheGenealogist, available to all Gold and Diamond subscribers, which includes many notifications of births, marriages and deaths abroad. 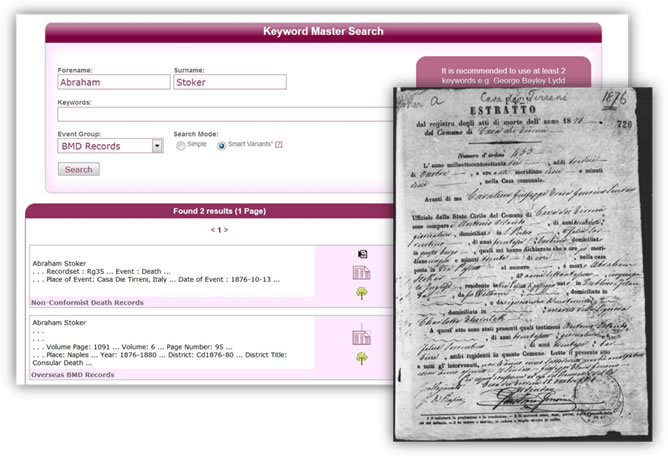 Abraham Stoker's death record in the Non-Conformist Registers at TheGenealogist.co.uk 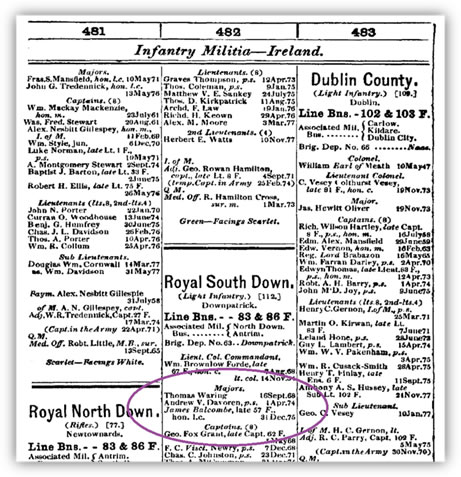 "Bram's father did not approve of his son's theatrical life..." 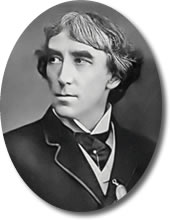 The true inspiration behind Bram Stoker's most famous story 'Dracula' is not clear and is still frequently debated. Parts of the story are based around the fishing village of Whitby, Yorkshire, where he spent a summer holiday in 1890. The most well known and accepted theory is that Dracula was based upon the Fifteenth Century Romanian Prince, Vlad Dracula III, also known as 'Vlad the Impaler'. However, Stoker spent several years prior to writing Dracula researching Eastern European folklore and stories of Vampires. Although Stoker created the famous Count Dracula, he wasn't the first author to write about Vampires, and Stoker could well have been influenced by earlier books such as 'The Vampyre' by Jon Polidori and 'Carmilla' by J Sheridan Le Fanu. The term 'Dracula' is also a variation of the Irish word 'Droch Ola' which means 'bad blood', and the horror stories Stoker was told by his mother as a child included people being buried alive during a Cholera epidemic. It was also believed in Irish folklore at this time, that if you committed suicide you would become a vampire unless staked through the heart, and there was incidentally a suicide burial plot in the graveyard at Clontarf, Dublin where Stoker grew up.

The image and distinctive character traits of Count Dracula bear a striking similarity to Bram Stoker's close friend Henry Irving, who became the first actor to receive a Knighthood in 1895, and who Stoker also named his only son after. Stoker suffered several strokes after Irving's death in 1905, but continued to write and published three more novels before his death on 20th April 1912 at St George's Square, London.