J.K. Rowling - Who Do You Think You Are?

Ancestors of all trades, French lineage, and untimely deaths... 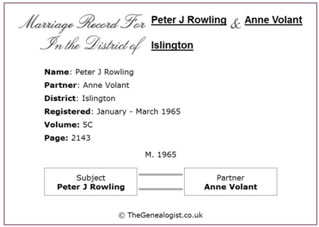 Harry Potter author J K Rowling was born on 31st July 1965, in Yate Gloucestershire, to Peter James Rowling and his wife Anne Volant. Her full name is Joanne Rowling and she actually has no middle name, but when she began writing the Harry Potter series, publishers were concerned that boys wouldn't want to read books written by a woman, so changed her pen name to show only her first initials. She chose 'K' as the middle initial in memory of her paternal grandmother Kathleen Burgen, who died in 1972.

Joanne's mother Anne, who passed away in 1990, was the grand-daughter of Louis Volant, born in France in 1878. The 'Who Do you Think You Are?' episode will be looking in depth at Rowling's French ancestry. Louis and his English wife Eliza Smith married in Gorleston, Norfolk in 1900, and the couple are recorded on the 1901 census in London where Louis worked as restaurant waiter.

On Anne Volant's maternal side, her ancestry is uncertain as her mother Louisa was the daughter of a Mary Smith, who is believed to have had an affair with a Dr Campbell resulting in pregnancy, and she disappeared shortly after Louisa's birth in 1916. Louisa was raised by the midwife who delivered her, Louisa Watts, and was referred to as Freda Watts. No father was recorded on the birth certificate, but Freda was told by her adopted parents that her father was a Dr Campbell.

Louis Volant in the London 1901 Census

Joanne has a very broad and varied ancestry which includes Henry Smith, father of Great Grandmother Eliza Smith and father in law to Louis Volant, shown on census records as a Suffolk Time Keeper and on later records as a Coast Guard. Paternal Great Great Grandfather William Richard Rowling from London, was a Blacksmith and had 15 children with his wife Francis. Francis can be found in the 1906 Kelly's Directory for Essex at their home in 252 Boundary Road, under 'Confectioners and Pastry Cooks'. Directories are a valuable resource in tracing ancestors, particularly if they had a distinctive trade. They can be used as a census substitute for years prior to 1841 or after 1911, and to provide information on their whereabouts between census years.

Sophie Blay in the London 1861 Census

Other occupations found include an iron worker, under-taker, publican, carpenter, and a foreman at the Lambeth Water Works. Full details of JK Rowling's ancestors can be explored here on our free online tree building program TreeView.