Richard Madeley - Who Do You Think You Are?

His grandfather was traded for tickets at the age of 10...

Part of the Who Do You Think You Are 2011 series features Richard Madeley who we all know as one half of Richard & Judy who once presented This Morning and more recently their own weekly chat show. Judy is Richard's second wife who he married in 1986 and they have two children together.

Richard was born in Romford Essex on the 13th May 1956, only two years after his parents and sister Elizabeth returned from Canada. His father was Christopher Madeley and his mother Mary C MacEwan who was born in Canada.

Richard attended Coopers Company School but rather than go to university Richard began his career in media through local newspapers. At the age of 19 he moved to BBC radio, before moving into television. During his time at Granada he met Judy.

Sadly Richard has stated in various interviews that his relationship with his father was sometimes violent. Maybe there is an explanation for this in their family history, which earned his fathers forgiveness? Looking at the life of Richards paternal grandfather the explanation could lie here, through his own life of abandonment and hurt.

Aged just 10 his grandfather Geoffrey was traded as a farm worker to his uncle in Shropshire by his father in exchange for tickets to Canada for the rest of the family. It was 1907 when Richard's great grandfather Henry wanted to make a fresh start with his family overseas. After losing his job, he did not have the money to buy the tickets so struck a deal with his brother William to leave Geoffrey behind to work the farm. The arrangement was only explained to 10 year old Geoffrey after the rest of the family had left for Canada and he was informed that he could not visit them until he was 21. Why him? Did his father not love him like his other children?

As he got older and the years passed Geoffrey was longing for the time to come to visit his family, however this was set back after the start of WW1. He went down to Shrewsbury where he enlisted and was put on a train bound for the trenches. On route they stopped along side a train full of Canadian soldiers. Was it fate? Geoffrey didn't miss the opportunity to check, he knew his brothers signed up from Toronto so went onto the train yelling the names of Douglas and John and there they were. Despite 10 years apart he recognised the faces of his brothers. Sadly this would be the last time Geoffrey saw Douglas, his oldest brother, as he was killed during the assault on Vimy Ridge in France 1917.

You can follow the events of WW1 through The War Illustrated magazines available as part of Diamond subscriptions available on TheGenealogist.co.uk.

The War Illustrated available on TheGenealogist.co.uk

After the war Geoffrey made it to Canada and was reunited with his mother. It was here he fell in love, but it didn't last, his uncle wanted him back on the farm in Shropshire and his girlfriend did not want to leave Canada. Once again Geoffrey was torn from those he loved most.

Here in Shropshire he worked the farm for many years and met Kate Edwards (Kitty) with whom he had three sons; James, John and Christopher. 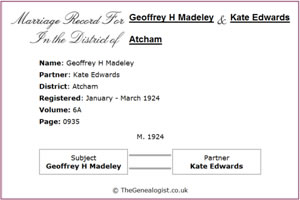 Life was to deal Geoffrey another blow when his son John died of pneumonia aged just 4. Perhaps the only way to protect himself from hurt in the future was not to become too attached and would therefore appear emotionless to those around him. Geoffrey and Kitty could not bring themselves to talk about the death of John.

Geoffrey had turned the Shropshire farm into profitable business and thought that in return for his dedication to his uncle and the farm that William would leave the business to him. Not so, the farm was divided between Geoffrey's siblings, who later sold their shares to Geoffrey.

You can access a huge collection of the PCC Wills and Will Indexes via TheGenealogist.co.uk with access to the original images. Wills are a valuable source of genealogical information as they can give details of family members, places of residence and burial, as well as revealing details about their possessions.

The basic TreeView facility is free to all registered users of TheGenealogist.co.uk and we have recently added the hour glass and custom full tree facilities.

Richard's episode is due to be shown on BBC 1, 9pm - Wednesday 28th September.