From South Africa to the West Midlands via Middle Earth - the life of J.R.R. Tolkien

Take a look into the history and family of a very famous author.

The power and speed of The Genealogist website allows us to take a look into the history and family of a very famous author. As we say goodbye to the London Olympics, we're now looking forward to the West Midlands Family History Show this weekend, and looking at the story of a local boy who went on to create another famous set of rings...

John Ronald Reuel Tolkien, more famously known as J R R Tolkien, was born on the 3rd January 1892 in Bloemfontein, Orange Free State, to Baptist parents Arthur Reuel Tolkien and his wife Mabel. His father was an English bank manager who was transferred to Bloemfontein to head the bank's office in the country we now know as South Africa. John had one younger brother who was also born in the Orange Free State in 1894.

Mabel Tolkien took the boys on a visit back to England in 1895 but whilst they were away, their father died of Rheumatic fever, leaving Mabel with two children and no source of income.

She returned to her parents' house in King's Heath, Birmingham before settling in Sarehole in Worcestershire. The village of Sarehole gave John much inspiration for his future work as he spent many hours exploring the Malvern Hills, Moseley bog, Sarehole Mill and his Aunt Jane's farm 'Bag End'. Mabel educated her sons at home and John could read by the age of four, and write fluently soon after. The boys attended King Edward's School in Birmingham and later St Philip's School.

In 1900, Mabel converted to Catholicism and was subsequently shunned by her Baptist family. Four years later when John was 12, she died from diabetes at the age of 34. Sadly it was still two decades before the discovery of insulin. Before her death, Mabel had appointed a Catholic guardian to take care of the boys should anything happen to her. The boys then went to live with their new guardian Fr. Francis Xavier Morgan at the Birmingham Oratory.

John and his brother Hilary grew up in the Edgbaston area of Birmingham in the shadow of Perrott's Folly and the tower of the Edgbaston Waterworks. A 1911 summer holiday, hiking through the Swiss mountains also provided a backdrop for his future stories and in particular Bilbo's journey through the Misty Mountains. 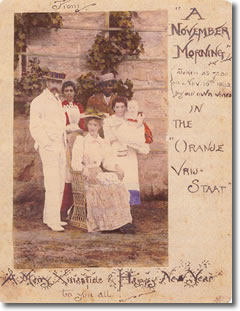 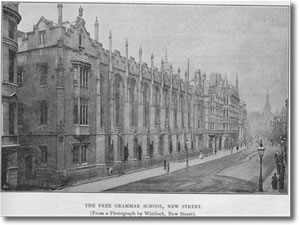 Tolkien family on 1901 census recorded by enumerator as 'Tonkien'

In October 1911, John enrolled at Exeter College, Oxford to study Classics, but changed two years later to English Language and Literature graduating in 1915 with a First Class degree.

With the start of the First World War in 1914, John delayed enlisting until he had completed his course but was then commissioned as a 2nd Lieutenant in the Lancashire Fusiliers. He served as a signals officer at the Somme and caught Trench Fever in October 1916. He was deemed unsuitable for service and spent the remainder of the war back home in England. It was during his period of recovery at a cottage in Little Haywood, Staffordshire that he began writing. 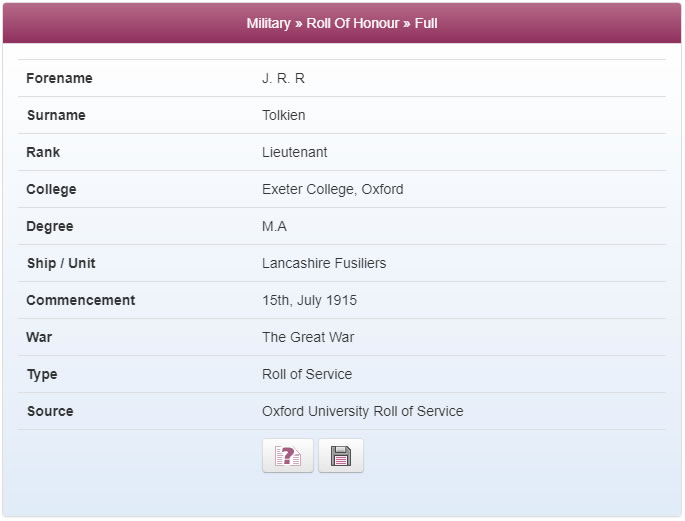 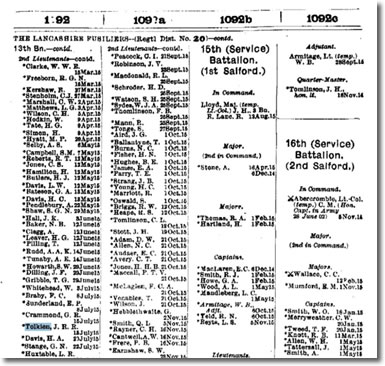 After the War he took up his first job working at Oxford English Dictionary, then in 1920 went to the University of Leeds as a Reader in English Language, becoming the youngest professor there. He returned to Oxford five years later as a Professor of Anglo-Saxon at Pembroke College, where he began his most famous stories 'The Hobbit' and 'The Lord of the Rings'. However, it was another twenty years before all three volumes of 'The Lord of the Rings' were completed in 1948. 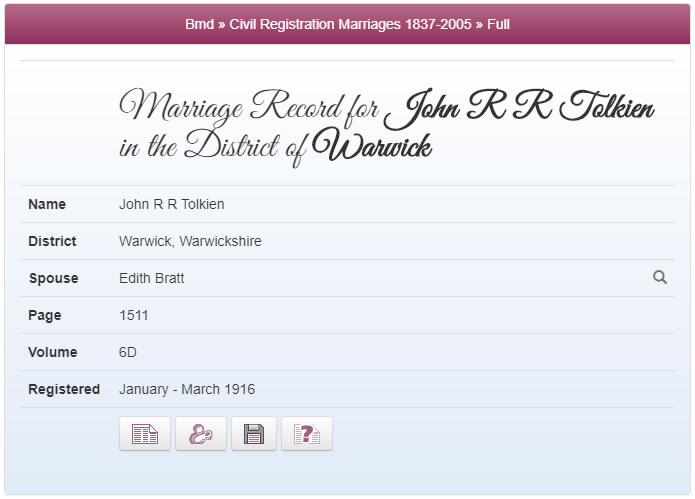 John's personal life could well have been lifted from the pages of a novel, as he met the love of his life Edith Bratt when he was just 16 years old. She was three years older than him and was already living at the lodging house when John and his brother moved in. They spent much time together and quickly developed a strong friendship, but she was a Protestant causing concern to his Catholic guardian Francis Morgan. Morgan forbid John from all contact with Edith until he had completed his studies, and threatened to remove him from his education if he did not comply.

John obeyed his guardian and cut off ties with her until the day before his 21st birthday when he wrote declaring his love and asking her to marry him. However, it appeared that John was too late, as Edith revealed she had believed John had forgotten her and was instead engaged to someone else. They arranged to meet beneath a railway viaduct and finally claimed their love for one another. Edith broke off her engagement and after Tolkien's insistence she converted to Roman Catholicism. They were married at St Mary Immaculate Roman Catholic Church on the 22 May 1916.

The couple had four children between 1917 and 1929, John, Michael, Christopher and Priscilla. He was a devoted father sending his children illustrated letters from Father Christmas each year. He continued to work as a Professor at Oxford whilst also writing until his retirement in 1959. It was not until after he retired that his books 'The Hobbit' and 'The Lord of the Rings' began to grow in popularity, and his number of followers became so immense that he had to remove their telephone number from the directory and the couple re-located to Bournemouth.

Edith died in Bournemouth on the 29th of November 1971, aged 82, only a few months before John was appointed as Commander of the Order of the British Empire (CBE) in the Queen's 1972 New Year Honours List. He died the following year on the 2nd of September 1973, age 81 and is buried with Edith at Wolvercote Cemetery in Oxford.

As you can see, the powerful search capabilities of The Genealogist allow you to quickly and easily search through the records of your ancestors. For the first time you can enter an ancestor's name along with an approximate year of birth and the option of keywords to trace an ancestors life through the records, from birth to census, marriage and more. The simple interface allows you to easily search millions of records from our impressive collection, including Non-Conformist Records, Parish Records, Wills, Electoral Registers, Newspapers and much more. Searches can be refined by year and/or a keyword such as occupation.

Researchers will get a much deeper insight into their ancestors in a fraction of the time. They'll be able to find everything we know about someone almost instantly with a single linked master search.

Not currently taking advantage of this excellent search tool? Go to www.thegenealogist.co.uk to find out more.