Let the Flavour Flood Out

Two brothers from Yorkshire establish one of the largest tea distribution companies in the world...

Having a cup of tea is an essential part of the day for most of us, and in the year to celebrate all things British, we take a look at how two brothers from Yorkshire established one of the largest tea distribution companies in the world.

Joseph and Edward Tetley were born 200 years ago in the early 1800s in Bradford, Yorkshire to comb-maker Samuel and his wife Martha. In 1822 they set up business together selling salt from a pack-horse. They later decided to expand into other commodities and added tea to their supplies, which was considered a luxury around this time. They wisely invested their profits in the railway, which was rapidly expanding and provided good returns, enabling the brothers to establish their company 'Joseph Tetley & Co' in 1837.

Joseph and Edward Tetley on 1841 Census, with Edward's wife Sarah and daughter Louisa

It was clear to the brothers that tea was the way forward as prices were beginning to fall and demand amongst the general population was increasing, so they decided to focus all their efforts on the tea market. At this time London was the centre of the world's tea trade, with tea clippers arriving at the docks with chests full of tea from India. The brothers decided to use their profits from Yorkshire and relocate to the capital to give their business the best chance of success. They set up business on Cullum Street, only yards away from the tea auction rooms on Mincing Lane.

"Tea was considered a luxury"

In 1865, Edward made the decision to leave the company and concentrate instead on developing his own brewery business, leaving Joseph to carry on alone. To mark this change, Joseph renamed the company 'Joseph Tetley & Company, Wholesale Tea Dealers'.

In August 1842, Joseph had married Jane Whitaker, a hatter's daughter from Keighley in Yorkshire. Her sister Sarah was also married to Joseph's brother Edward. They had three children, Edward born in 1846 who died in infancy, a daughter Sarah Jane in 1847 and a second son Joseph in 1850.

Joseph and Jane Tetley on 1861 Census

Joseph introduced his son Joseph Tetley Junior to the business in 1871, and working together as partners they expanded into the blending and packing of tea. The company grew considerably over the next twenty years after a deal was established in 1888 with distribution company Wright & Graham, based in New York. Wright & Graham mostly imported cotton but had decided to expand into tea with Tetley. The company was founded by Scottish born David Wright and his cousin, and they mostly sold products to department stores such as R H Macy.

Joseph Tetley on the 1901 Sussex census with his nephew William Tetley-Jones, employed as a 'Tea Taster' whilst learning the ropes of the business

Joseph Tetley passed away on the 27th December 1889 at Framlingham Suffolk, at the age of 88, leaving his son Joseph in full control of the business. Under Joseph Junior's leadership Tetley saw the first launch of the tea bag, which was invented accidently in 1908 by New York tea merchant Thomas Sullivan. Samples of tea were traditionally sent in tins, but Sullivan sent his samples in silk bags to reduce costs. Although he intended for the tea to be removed from the bags, many customers assumed that the tea was meant to be brewed in the bags and often found it easier. The practise became more and more common across America and Tetley decided to follow the trend and develop their own bags, launched initially in the United States only.

In 1913, Joseph purchased Wright & Graham and bought new premises for manufacturing on Greenwich Street, Manhattan. Tea sales in the UK had fallen and the company was increasingly reliant on profits from the American tea market and their growing demand for tea bags.

When Joseph died in 1936, his nephew William Tetley-Jones took control, but his leadership was short lived as he died in Jamaica only one year later. 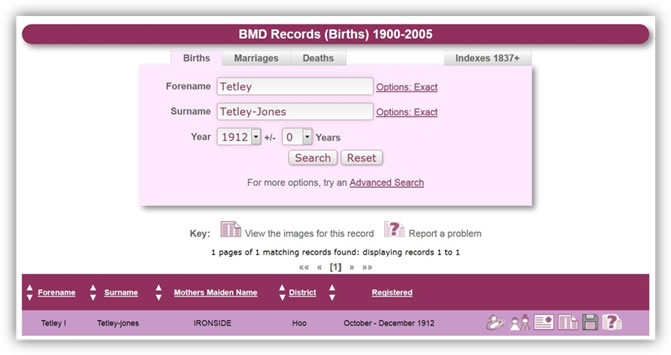 Birth Index entry on TheGenealogist.co.uk for Tetley Ironside Tetley-Jones in 1912 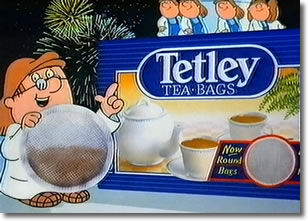 Tetley invented the round tea bag in 1989

His son, Tetley Ironside Tetley-Jones inherited the company at the age of 25, and looked for a way of boosting the company's sales in the UK. Despite strong opposition from his board, Tetley believed that the company's future lay in the production of tea bags rather than tea dealing, and purchased machinery from New York to begin manufacturing tea bags in the UK. His big launch had to be put on hold in 1939 with the outbreak of the Second World War, and he had to wait until 1951 before he could put his plans into action. He then faced tough import restrictions from the post-war government which created problems in obtaining the necessary equipment. Tetley persevered and finally introduced tea bags to the UK market in 1953. Although not an immediate success, the British population slowly began to love the tea bag and they are now the company's greatest seller.

Tetley continues to lead the market in new designs with the invention of the round tea bag in 1989, and the drawstring bag in 1994. Tetley now buys around one million kilos of tea every week.