Were any of your ancestors ghost hunters?

TheGenealogist looks into the spooky past...

As we approach the time of year for Halloween when the annual activities of carving pumpkins, apple bobbing, visiting haunted attractions, playing pranks, telling scary stories, and watching horror films is commonplace, TheGenealogist takes a look back at our ancestors' views on the subject of the paranormal.

It was a hotly debated subject of the time and people had wildly different views. So much so that a number of leading academics at the time came together to form the 'Ghost Club'.

Charles Dickens was at the forefront of this with a number of other Cambridge academics. He was soon joined by a number of other famous personalities at the time including Sir Arthur Conan Doyle of Sherlock Holmes fame and the leading chemist and physicist, Sir William Crookes OBE.

It's still an area that fascinates many people and the club is still open to members in 2012. The Times mocked the Ghost Club in an 1862 article, but it has stood the test of time.

We can use TheGenealogist to trace the main protagonists behind the Ghost Club. The excellent 'All-in-one' search feature allows us to find information on a targeted person quickly and easily. We can look into the life of Sir William Crookes OBE by a basic search on his name and approximate year of birth. 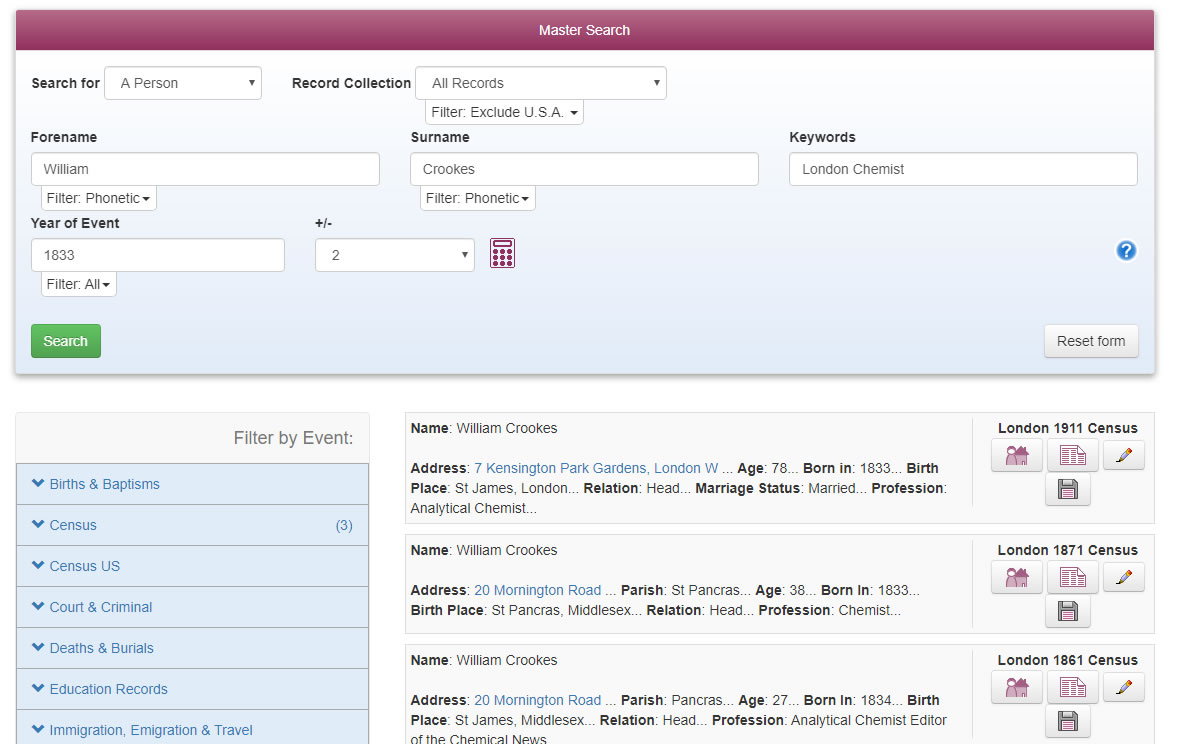 Looking into the life of Sir William Crookes OBE on TheGenealogist

From our previous research we know he was born around 1832 in London. With just the basic details we can bring together a number of records of the life of this eminent scientist.

With the All in one search, we can map out William's life and where he lived from 1841 to 1911 via the census records. We can see how he rises to become a prominent chemist. In 1851, he was to be found living with his parents, Joseph and Mary, in Hammersmith whilst studying at the Royal College of Chemistry.

Sir William Crookes in the 1851 Census on TheGenealogist

Crookes was knighted in 1897, and in 1910 received the Order of Merit. His list of achievements include discovering the element 'thallium', identifying the first sample of helium and the inventor of the Crookes Radiometer.

Despite his scientific achievements, he felt he had a duty to study the paranormal associated with spiritualism, possibly influenced by the early death of his brother aged just 21 in 1867. In the company of other leading academics and scientists, he became a long standing member of the Ghost Club and was the President from 1907-1912. In the final year of his presidency, we can see he still lived in Kensington with his wife, Ellen.

Sir William Crookes in the 1911 Census on TheGenealogist

The Ghost Club identified haunted houses, interviewed mediums and then produced reports and papers to identify this. Sir William's final report on spiritualism so enraged the majority of the scientific community who were convinced spiritualism was fraudulent that there was talk of him being deprived of his Fellowship of the Royal Society.

Other members of the Ghost Club can be found on TheGenealogist. The birth record details of the famous war poet from the Great War, Siegfried Sassoon are found from 1886.

The famous actor, Peter Cushing was also a member and he's also found on TheGenealogist. Born in Surrey in 1913, he would later become a ghost hunter along with Donald Campbell and other well known personalities. The star of 'The Curse of Frankenstein ' and 'Dracula' and other horror films also had a significant interest in the spirit world.

He can also be found on TheGenealogist with both his birth record, and his marriage record to his wife Helen in 1943:

Birth and Marriage record for Peter Cushing on TheGenealogist

The Ghost Club has continued to look into the world of the paranormal and as it celebrates its 150th anniversary, the group can still be found visiting houses to check out reports of hauntings or sightings of ghosts still using all the scientific techniques at their disposal to trace any unexplained activity. Their work continues and their predecessors may well be watching over them...