Gary Lineker - Who Do You Think You Are?

Not the only 'poacher' in the family...

Gary Lineker OBE holds the record as England's top goal scorer in the FIFA World Cup Finals with 10 goals. He is England's second highest goal scorer of all time and was a renowned 'goal-poacher'. He is now a well- known TV personality working with the BBC and other media organisations.

Gary Winston Lineker was born in Leicester in 1960 and his middle name comes from Winston Churchill, with whom he shares a birthday. He has one younger brother, Wayne, who is two years younger.

Gary's father, Barry, was a greengrocer who ran the Lineker market stall in Leicester for many years, following in his own father's footsteps. Barry married Margaret Abbs in 1959 in Leicester. We can see a copy of their marriage record on TheGenealogist.

Barry would receive help on the market stall from both his sons. This continued even when Gary became a professional footballer, when he would assist the family on the stall in the summer break!

The Lineker family had developed a tradition of working in the fruit and vegetable business in the Leicester area for many years. Barry was born just before the outbreak of World War Two in Leicester in the summer of 1939. A copy of his birth record can be seen on TheGenealogist.

Barry's parents were William Lineker and Alice Hoare who married in 1933, in Leicester. A copy of their marriage record is also available at TheGenealogist.

William also plied his trade in the fruit and vegetable business, a tradition he inherited from his father, George.

Here we see William and his family in the 1911 Census, when he was a small baby. His father George Albert is listed as a 'fruiterer', living with his wife Emily in Northampton Street, Leicester. 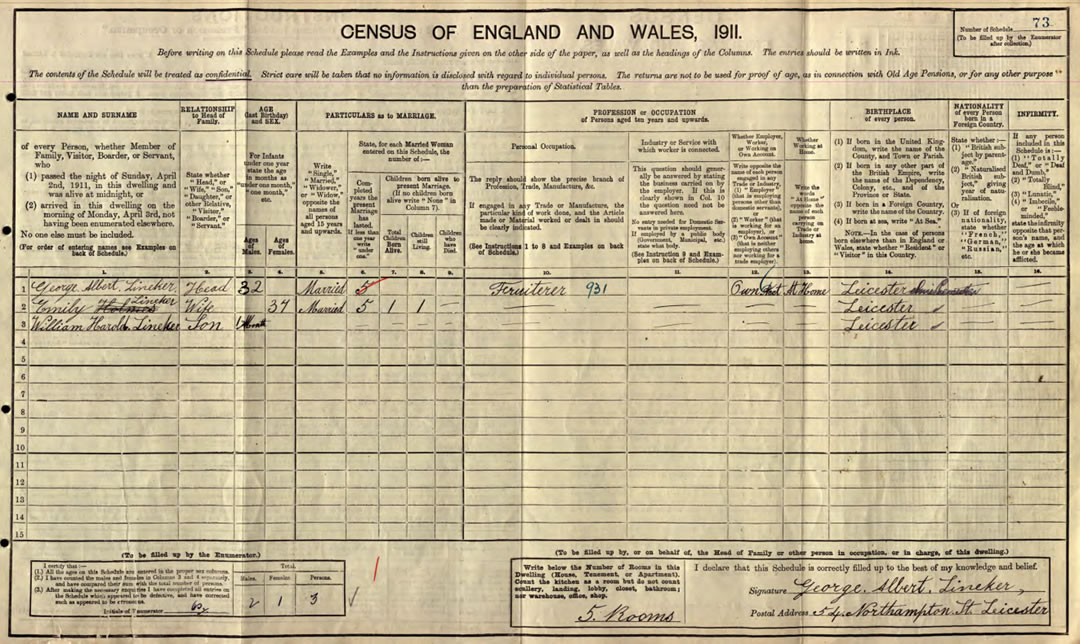 George and Emily in the 1911 Census

George is listed in the 1912 Kelly's Directory with his greengrocer business in North Avenue, Leicester.

George in the 1912 Kelly's Directory

In the 1901 census, William is living in Leicester with his wife Lavinia, their eight daughters, and their son Albert, who started the family tradition in the 'fruit business'. 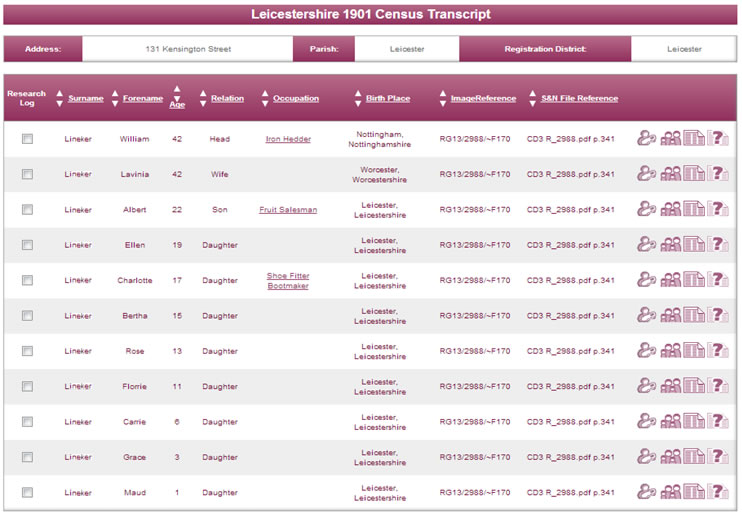 William and family in the 1901 Census

Here is a copy of the birth record for George Albert Lineker, born in 1878.

In 1891, George Albert can be seen in the Census as living with his family in Syston Street, Leicester. His father, William, is an 'Iron Moulder', and his mother is a shoe machinist. 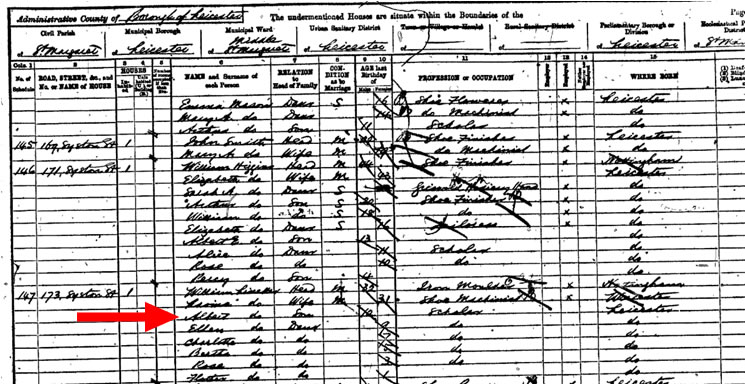 George and family in the 1891 Census

Delving further back into the family history of Gary Lineker, there are interesting stories of the ups and downs of life in the 1800s.

James Pratt, the 3rd x Great Grandfather of Gary Lineker was a stocking maker by trade in Hinckley, Leicester. He was born in 1820 in Leicestershire and married Maria Leeson in 1843. Here is the family in the 1851 Census:

James and family in the 1851 Census

Both James and Maria and their eldest son William are classed as 'Stocking Makers', living in Bond Street, Hinckley.

By 1871, James and Maria are living at Hamson Yard, near Bond Street and are still classed as 'Cotton Stocking Makers'. Hinckley was renowned for its hosiery and knitwear trade so James and Maria would have been working in a profession popular to the area. Hinckley also had its fair share of slum housing, with many 'Yards' the address for numerous families. 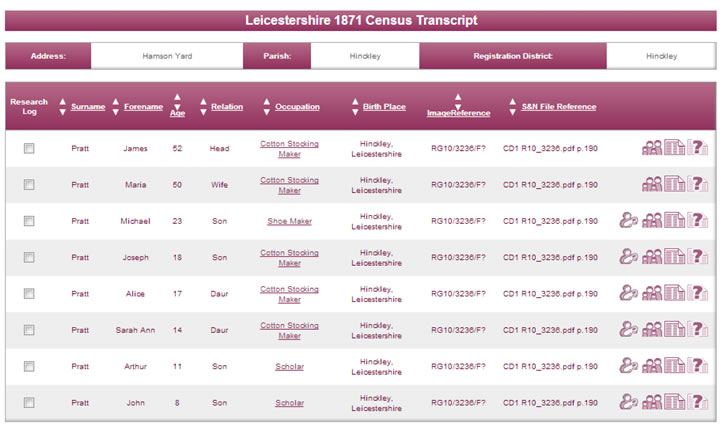 James and family in the 1871 Census

The growing family of James and the low wages of his profession would have meant providing for his family was difficult. Also if work wasn't available, life would have become desperate. Hence, it is no surprise that James is found getting into trouble with the law in trying to make ends meet. He is listed in the Leicester Mercury of Saturday March 11 1848, receiving six months hard labour for stealing six tame fowls.

A more successful story concerns Gary's 4x Great grandfather, Thomas Billington. Thomas, born in London in 1791, was the son of an illiterate gardener who worked for a wealthy landowner. The landowner paid for Thomas to be educated and he takes full advantage of this 'lucky break'.

After receiving an education, Thomas becomes a legal clerk and then by the time of the 1841 census, his occupation is classed as 'Stationer'. He seems to be supporting his family and does not have to resort to desperate measures unlike the more unfortunate James Pratt.

Thomas and family in the 1841 Census

Thomas sadly died in 1849 at the age of 60. Here is a copy of his death record on TheGenealogist.

However, his youngest son, Charles, carried on the tradition as seen here in the 1871 census. He is also now listed as a 'stationer' by occupation.

Charles and family in the 1871 Census

Charles died aged 52 but his family carried on in their skilled professions. Ellen was a cabinet upholsterer, their daughter (also Ellen) was a dressmaker and their son Arthur was an apprentice compositor, following on the stationery/printing tradition.

Ellen and family in the 1891 Census 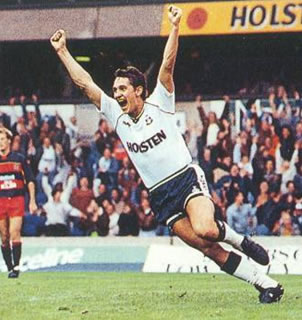 Gary Lineker left school with four O Levels. One of his teachers wrote on his report card that he "concentrates too much on football" and that he would "never make a living at that". He then joined the youth academy at Leicester City in 1976.

As with his relative, Thomas Billingham, Gary was very fortunate to get his 'lucky break' but his determination to succeed and make the most of that 'lucky break' maybe stems from the Billingham side of his family! 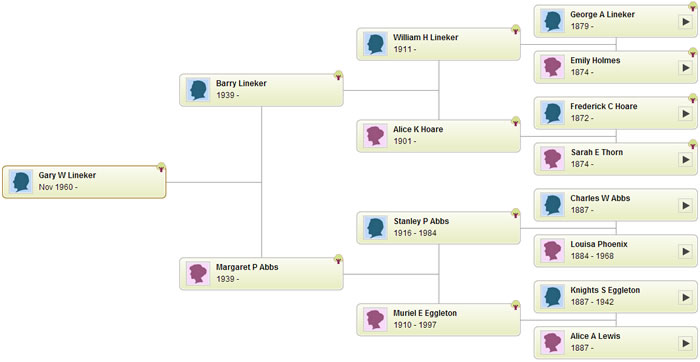