Casualty Lists reveal if your ancestor was Injured, Killed or Missing in Action

Researching a soldier from among the Killed in Action records of World War I, we can find the famous war poet Wilfred Owen (Second Lt. W.E.S. Owen of the Manchester Regiment) who was shot and killed in November 1918, the news of his tragic death reaching his parents as the Armistice bells were ringing.

Scrolling to Military Records on TheGenealogist site, we select "Casualty Lists" from the drop down menu. Under status we then choose "Killed" and enter the name of our ancestor, such as W.E.S. Owen in this example, and the results will appear for us to choose from. 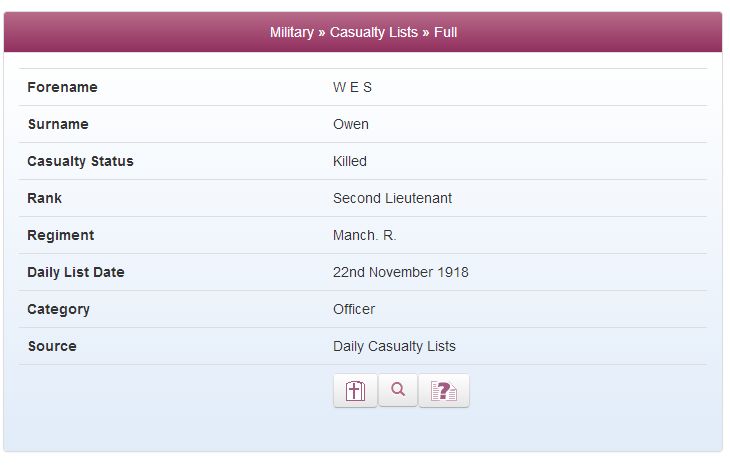 The second class of newly released records on TheGenealogist is for those for Missing in Action. This was the status given to soldiers such as John Kipling, the son of the famous writer Rudyard Kipling.

Killed at the battle of Loos, John Kipling's body was not found until 1992, although some historians now dispute that the identification of his body had been done satisfactorily and that a different officer is buried in the grave now attributed to him. If this is so,then John Kipling is still Missing in Action.

Kipling had written to his father before the battle asking for an aluminium identification disc, "with a string through it". Officially issued British identity tags of the time were made of fibre and so didn't always survive well in battle.

The third set of data in this release are those created when the authorities changed the status of the record for men who were presumed to be Prisoners of War, or wounded, but were later discovered to be dead. These "Other" records from the drop down menu in Casualty Lists, would also include people who died on ships that left port and were then sunk and so the deaths were not originally listed as casualties.

Some people initially reported to be dead may appear in the Casualty Lists as "Previously Erroneously Reported Killed". When it is shown that a soldier lived, this can reopen a closed off branch of a family tree, the correction now opening up that person's line for research again.

A good example of this is a soldier from the South Lancashire Regiment, Private E.E. Bennett.

The local newspaper, in Warrington, had reported at the time that the grieving parents of Private E. E. Bennett had been left in a state of shock when they received a letter from their son, who the army had pronounced dead two weeks before.

We can see the change in his status in the Casualty Lists as available on TheGenealogist when the War Office changed his status on finding he was still alive. 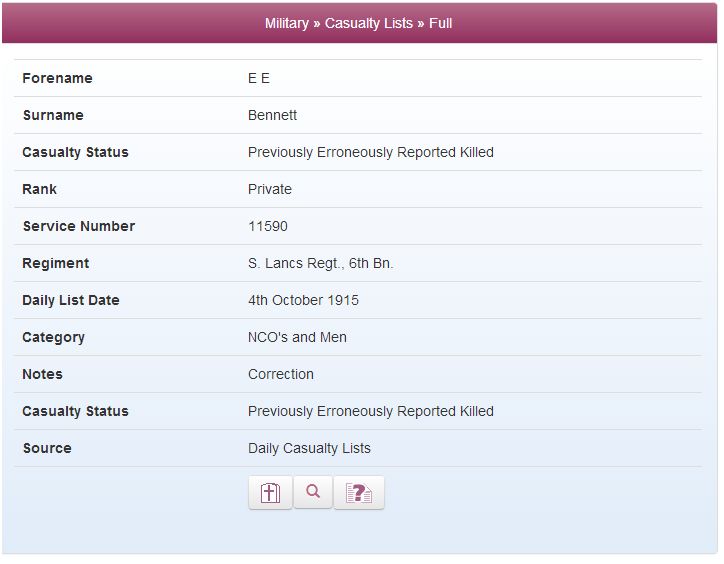 A complete opposite illustration, on many levels, is that of the 5th Earl of Longford.

Within the Daily Casualty List, on TheGenealogist for the 6th September 1915, we can find Lord Longford who had previously been reported as "Wounded".

During the First World War, Brigadier-General Lord Longford was in command of a division sent from their base in Egypt, to Suvla on the Gallipoli peninsula as reinforcements during the Battle of Sari Bair.

The initial attack by other Divisions on Scimitar Hill had failed. With his men waiting in reserve, the 5th Earl and his troops were then ordered to advance in the open across a dry salt lake. Under fire, most of the brigades had taken shelter, but Lord Longford led his men in a charge to capture the summit of Scimitar Hill. Unfortunately, during the advance, he was killed.

Earl Longford's body was never recovered and so, in the confusion of war, he was first recorded as Wounded, and then Wounded and Missing. Eventually, in 1916, he would be assumed to be dead. Posterity tells us that the peer's last words were recorded as "Don't bother ducking, the men don't like it and it doesn't do any good".