Twiggy - Who Do You Think You Are?

Was Twiggy's ancestor a victim of fashion?

Lesley Lawson (formerly Lesley Hornby), more widely known by her nickname 'Twiggy', is a fashion icon and model from the 1960s. She was named "The Face of 1966" by The Daily Express and voted British Woman of the Year. By 1967, Twiggy was known worldwide and had modelled in France, Japan and the U.S. and was on the cover of Vogue and Tatler. She then forged a career as a fashion designer and still promotes clothing ranges.

She was born on the 19 September 1949 in Neasden, North West London, the third daughter of carpenter William Norman Hornby and Nellie Lydia Reeman. Twiggy's sisters were seven and fifteen years older than her, Shirley was born in 1934 and Vivien in 1942. Twiggy's parents, William and Nellie married in Willesden, North London in 1933.

Although coming from a close-knit family, Twiggy's parents had said very little about her roots before they passed away. Her mother, it seems, had never liked talking about the past and Twiggy had only a vague memory of her maternal grandfather, who had died when Twiggy was about four.

As for her grandmother, on her mum's side, Twiggy knew nothing about this lady. She didn't even have a name to go on. However, using TheGenealogist we discover more details from the birth record of Twiggy's mother. Nellie Lydia Reeman was born in 1909 in Greenwich.

One mouse click on TheGenealogist takes us to Nellie's parent's marriage and here we find Alfred Reeman and Alice Meadows. They married in 1899, and we can see that Alice's maiden name is Alice Meadows. 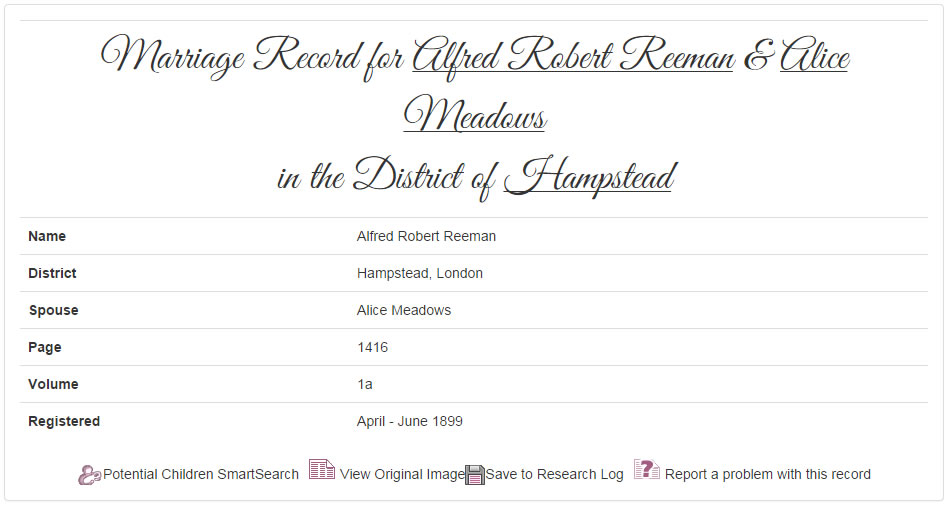 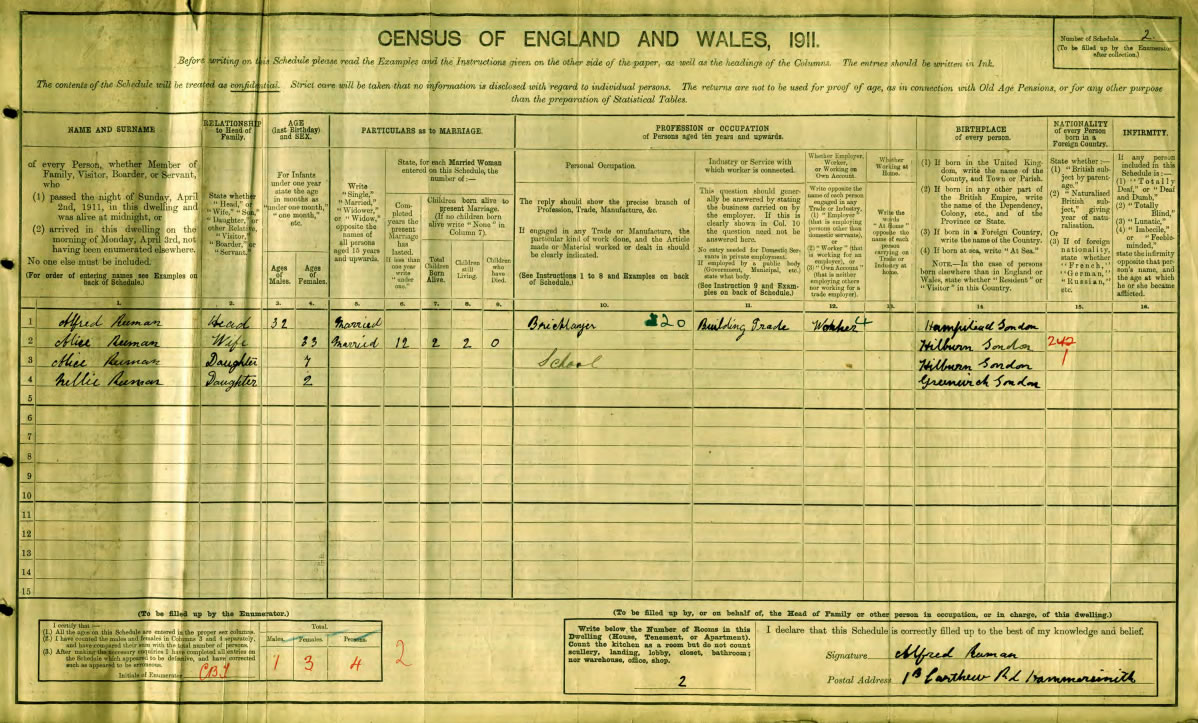 The family are found in the 1911 Census, living in Carthew Road in Hammersmith.

Using the 1891 census and the unique 'Family Forename' on TheGenealogist, we are able to discover that  Twiggy's grandmother, Alice Meadows, was one of seven children and that the family had lived in just two rooms. We find the name recorded as Meadow in the census which is, perhaps, simply an enumerator's error.

Here we use the Family Forename search looking for the 'Meadow' family. One result appears in the Middlesex Census for 1891, and one mouse click takes us to a transcript of the family in the census.

Family Forename Search for the 'Meadow' family at TheGenealogist

One result appears for the 'Meadow' family

The family are found in the 1891 Middlesex Census

Alice Meadows was born in 1878 in Willesden, North London. The parents of Alice Meadows were William and Elizabeth Meadows. Here we find young Alice aged 3 and her family, correctly named by the enumerator this time as 'Meadows' in the 1881 census on TheGenealogist.

The Meadows family in the London 1881 Census

With further research Twiggy uncovers the sad truth that her ancestor's family were torn apart by illness, poverty and crime. Her search takes her into the Victorian's bleakest institutions, the workhouse and the prison, and this is the most likely reason why she had never heard anything about them. As is often the case in family history research, the perceived shame of forebears that endured these places would mean that the next generation would never talk about them.

It turns out that her great-great-grandmother, Grace Meadows, was sent to a "house of correction" for the crime of counterfeiting coins and theft.

Grace and her daughter Lucy were found to have stolen from Charles Pragnell in 1874. Charles lived nearby with his wife Emma as can be found in the census records on TheGenealogist.

Charles and Emma Pragnell in the 1871 Census

Lucy Meadows was only 13 at the time when she helped her mother with the crime. Here is the family in the 1861 census, when Lucy was just 8 months old. 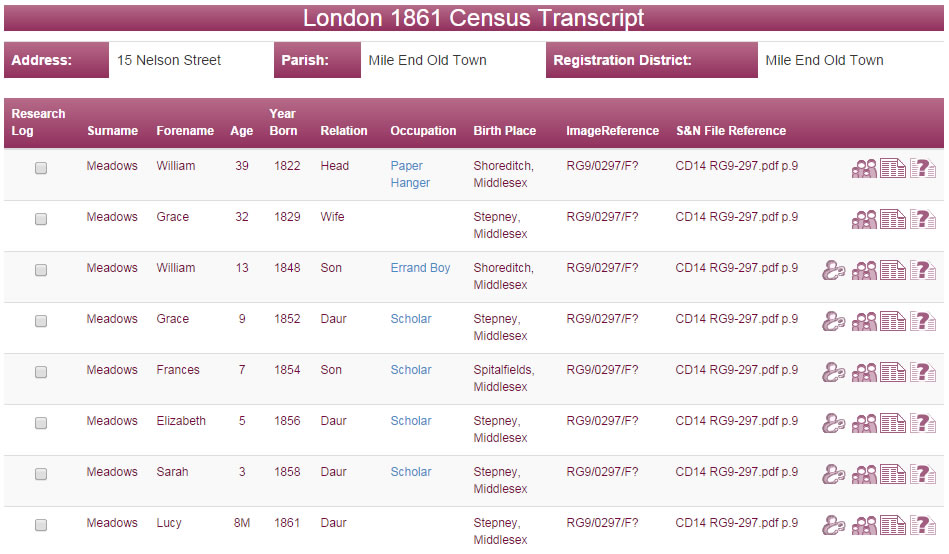 The Meadows family on the 1861 Census

On being released Grace "went straight", keeping out of trouble and reverting to her maiden name of Gillies. Then, as a respectable landlady, she ended her life in a tragic way, shopping for clothes and being killed in a "bargain sale" stampede.

The shop where Grace died is now a supermarket, but was once the shop of Messrs McIlroys at 333-339 Mare Street, Hackney. Messrs McIlroys was a thriving department store in Mare Street and newspaper reports of the time tell a tale of a stampede and rush as excitable customers rushed to get their hands on the bargains in the sale. Grace was caught up in this, the excitement and stress no doubt bringing on her heart attack.

The unfortunate events that occurred to the family can be further seen in that Grace's son William, can be found in the 1901 Census on TheGenealogist, serving time at Holloway Prison in London after falling foul of the Law.

William Meadows in Holloway Prison on the 1901 Census

Searching for the rest of the Meadows in the 1901 census, we discover that the family are now living apart and so it seems likely that there had been some sort of a dispute to split them up.

For example one of Alice's sisters, Lucy, is living with Alice and her husband at 38 Palmerston Road, Hampstead.

Lucy Meadows on the 1901 Census

As Twiggy's Who Do You Think You Are? research has revealed she has a family history story filled with colourful characters, leading lives as eventful as her own has been!

See the connections between her ancestors and the names behind the stories on TreeView, the online tree builder. Click here to view the Twiggy tree.