Discover the last wishes of one of this country's greatest heroes... 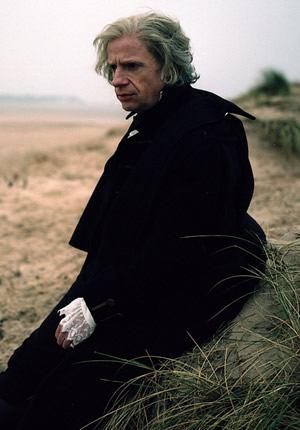 'Nelson In His Own Words', BBC TV

The BBC2 TV programme on Horatio Nelson (Friday 6th March 2015) centres on what the famous Admiral wrote in his letters to reveal a more complex man than the hero created after his death. It is not just his correspondence, however, that can be used to understand the great man further as we can also discover a great deal more about him from the words that he included in his will and codicils by using the resources of TheGenelaogist to find his last will and testament.

Wills are a valuable source of genealogical information for many of us researching our ancestors as they can give us details of family members, places of residence and burial, as well as revealing details about their possessions. You may be surprised to find that all levels of society left wills and not just the wealthy.

Before 1858, England and Wales were divided into two provinces. The largest and most influential was Canterbury, which covered the South of England up to the Midlands and also Wales. The other was York, which covered Durham, Yorkshire, Northumberland, Westmorland, Cumberland, Lancashire, Cheshire, Nottinghamshire, and the Isle of Man. The two provinces of Canterbury and York had their own Archbishop, and were divided into several dioceses. Each diocese had a minimum of two bishops, and these dioceses were again divided into archdeaconries.

Until 12 January 1858 all wills had to be proven in a church court to ensure their legality. There were over 250 church courts across the country, and the records from these are mostly stored in local record offices. 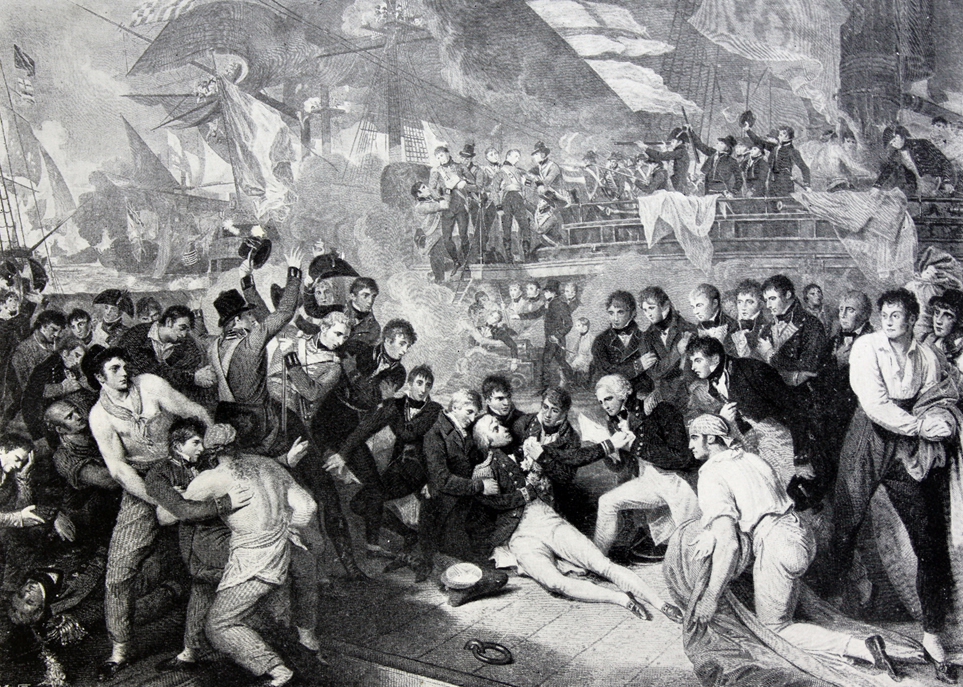 The Death of Nelson

On the 21st October 1805 Admiral Lord Nelson was killed on board his flagship the Victory.

We can easily look for Nelson's will within the Prerogative Court of Canterbury wills on TheGenealogist. At the time that Nelson's will was written, on the 10th May 1803, he was already a national hero and his various titles are identified in the preamble to the document.

Using the Master Search on TheGenealogist we enter the Forename 'Horatio' and Surname 'Nelson', and then select Wills from the dropdown menu. 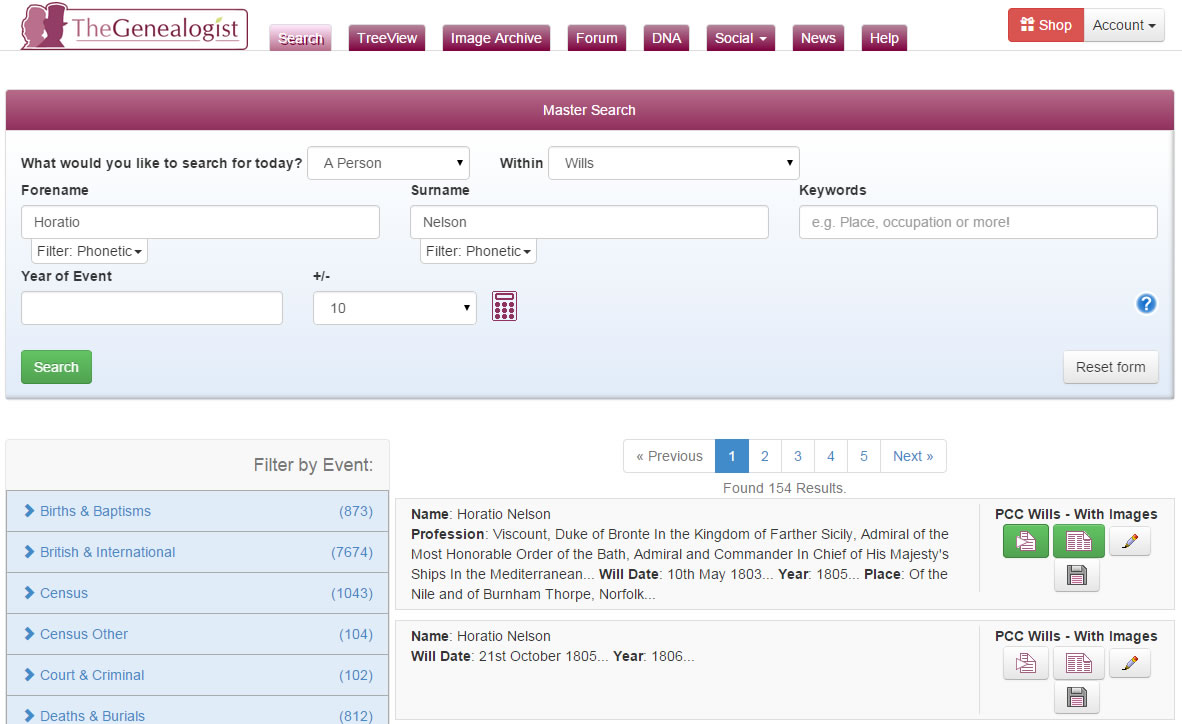 Searching for Nelson's will at TheGenealogist

With one click we can see an image of the original will. 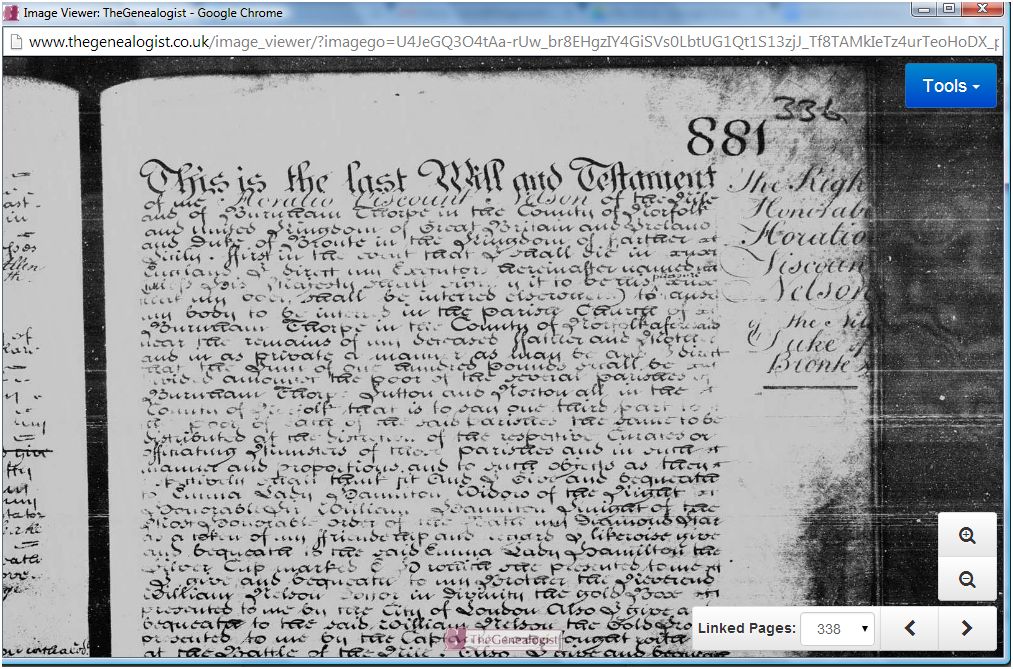 The last Will and Testament can reveal to you what an ancestor considered important to them by what they distribute to family and friends, the charities that they may have supported and perhaps, as in Nelson's case, other people that they cared enough for to have mentioned.

In Viscount Nelson's will we can decipher that the poor of three parishes were left a charitable donation. His mistress, Lady Hamilton, is first in line with the gift of his Diamond Star and a silver cup. The next beneficiary was his brother, the Rev. William Nelson D.D., who got the gold box that had been presented by the City of London to the admiral, and the gold sword presented by the Captains who had fought alongside Nelson at the Nile. His two sisters are left a sword and a silver cup each, and to his "worthy friend Captain Hardy", Nelson left his telescopes, sea glasses and £100.

Codicils can reveal changes of mind by our ancestors, or simply an update of the testators last wishes. In Nelson's case he was aware that he was going into battle and may not survive the day.

On the 21st October 1805 Nelson was on board his flagship, near Cadiz, off Cape Trafalgar. He wrote a final codicil "in sight of the combined fleets of France and Spain". A click on the record and, with a bit of practice to decipher the handwriting, we can make out the words of praise that he heaps on Lady Hamilton for the help she has given to her country. It would seem that the Admiral believed she had been overlooked for a reward for her diplomacy on behalf of Britain. 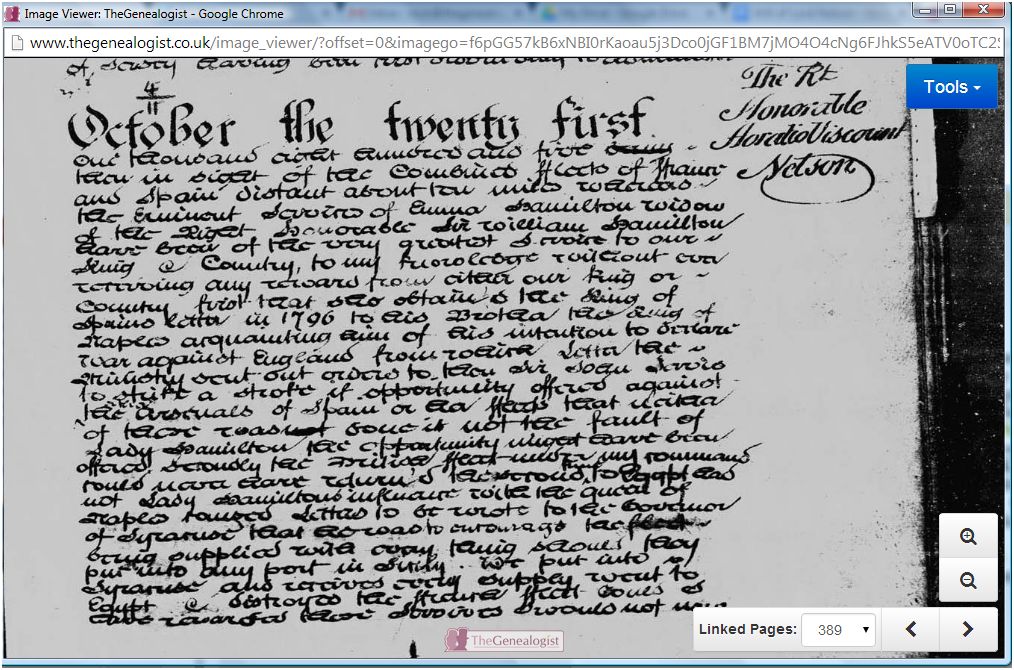 In his final codicil to his will Nelson was appealing to the King and Country that, in the event of his death, they should give his mistress "ample provision to maintain her rank in life". It would seem providing for Lady Emma Hamilton and, by inference, his illegitimate daughter Horatia lay heavy with Nelson as he saw the enemy fleets on the horizon.

On that very afternoon the Admiral was fatally wounded by a single musket ball and died.

With the victory at the Battle of Trafalgar the nation gave Nelson a state funeral and his body was then buried in the crypt of St Paul's Cathedral. You can find a picture of Nelson's Tomb by searching the Image Archive on TheGenealogist. 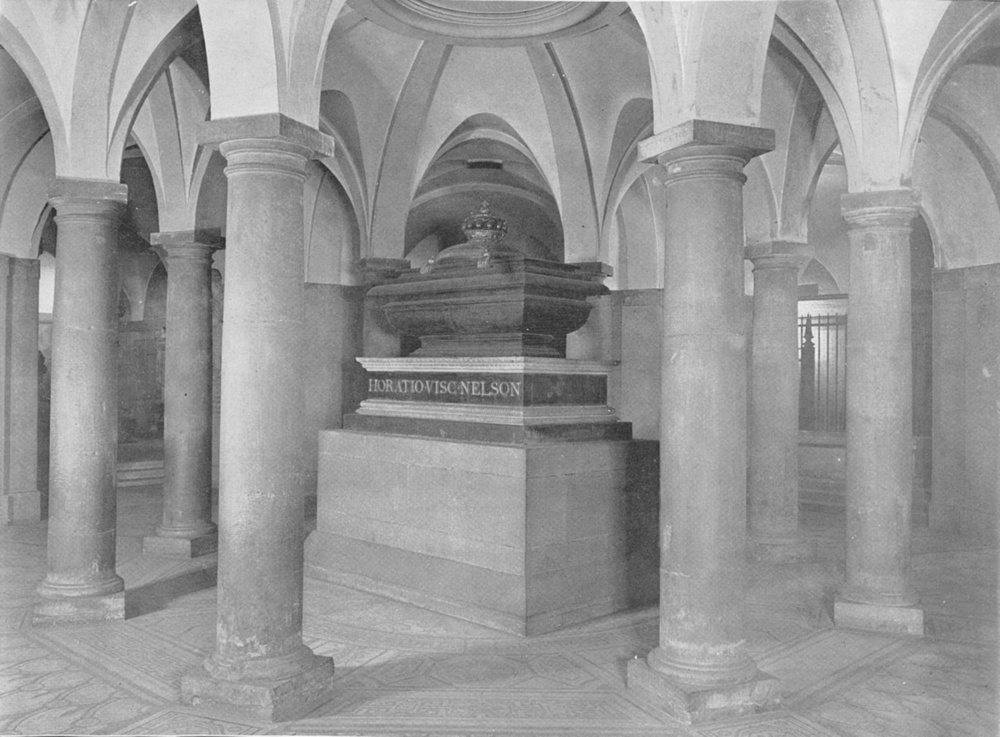 Despite his last wishes, the government awarded various moneys to Nelson's family instead and ignored Lady Hamilton and Horatia. The former was to end up in debt, being imprisoned in the King's Bench Debtors Prison and then running away from her creditors by going to live in Calais. When Lady Hamilton died in 1815 Horatia went to live with one of Nelson's sisters and eventually she married a clergyman to live quietly with a large family of ten children as a vicar's wife. 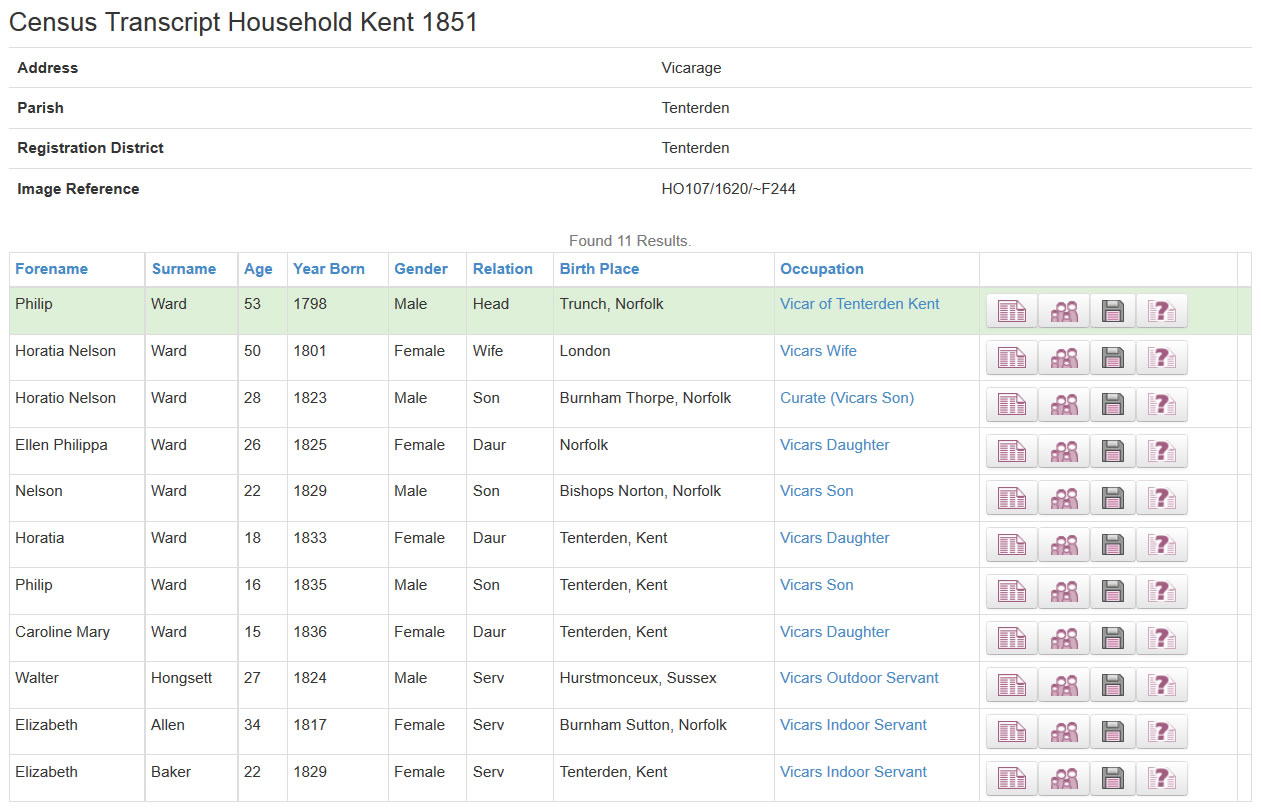 Horatia in the Kent 1851 Census at TheGenealogist

With the resources available on TheGenealogist website we have been able to understand more about the last wishes of one of this country's greatest heroes. If you find an ancestor's will within the records on TheGenealogist, you can discover so much more about who and what was important to them and add some valuable information to your family story.