Who Do You Think You Are? Series 12 Announced

The BBC has announced the lineup for the 12th series of Who Do You Think You Are?

Celebrities from film, TV, theatre, modelling, music, cookery and news feature in the upcoming 12th series of Who Do You Think You Are? The genealogy show, that first introduced many a budding family historian to the fascinating subject of family tree research, will be back later in the summer.

In a series that crosses four continents and covers a period of history stretching back nearly a thousand years, the 12th series allows us to witness the ten stars as they delve back into their family history. Moving from the Tower of London to the Highlands of Scotland, from Tunisia to Tasmania, from the Punjab in India to the Wild West of America, this year's collection of famous personalities set out to dig deep into their family history and share their discoveries with us. On the way they will be uncovering a host of hidden pasts and shocking revelations that should entertain viewers.

According to the producers we can expect to see moments of heartbreak, laughter, intrigue and surprise, as each episode captures every step of this series celebrity's journey back through their family tree. It promises to reveal stories of new-born babies spirited away under cover of darkness to convicts transported to the other side of the world; from sisters separated by the Holocaust to the battlefields of North Africa; from laudanum-addicted socialites to paying the ultimate price for treason in Tudor England; from music halls to tales of vampires, the latest series of Who Do You Think You Are? reveals the rich and extraordinary stories of the celebrities' families and their history.

In the 12th series we can look forward to seeing the model and actress Jerry Hall, Sir Mick Jagger's ex-wife, trace her ancestry from the cotton mills of Oldham to the plains of Texas as she discovers more about her family's pioneering past as they blazed a trail west across the American continent.
Sir Derek Jacobi's story is one of equal contrasts. His humble roots, in Walthamstow in the east-end of London, can be found by using TheGenealogist.

We can see his birth in the index records for the District of Essex South Western, which covered Walthamstow at that time. By using the one click link for 'Parent's Potential Marriage' from TheGenealogist's transcription we are able to see that his parents had married two years earlier in 1936 and that they were named Alfred G. Jacobi and Daisy G. Masters. 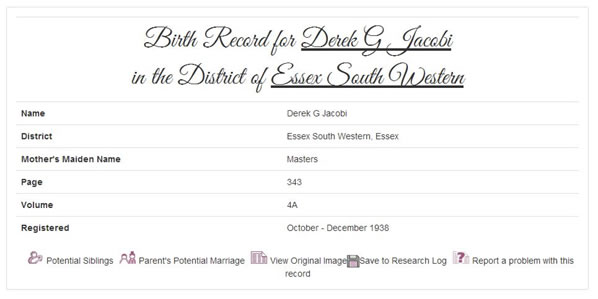 TheGenealogist provides easy access to census transcripts with its unique search tools and original images, from 1841 to 1911. With this resource we are able to find that Sir Derek's grandparents lived at 21 Populars Road, Leyton where his grandfather, Henry William Jacobi, carried on the trade of Boot Maker.

In contrast to this modest background researchers, for the television programme, have found that his ancestors have a connection to the court of Louis XIV of France. His family tree hides a dangerous secret where his ancestor was discovered to be leading a double life before fleeing to England. On top of all this Sir Derek has another surprise, to be revealed in his particular episode – an unlikely connection to royalty on this side of the Channel. 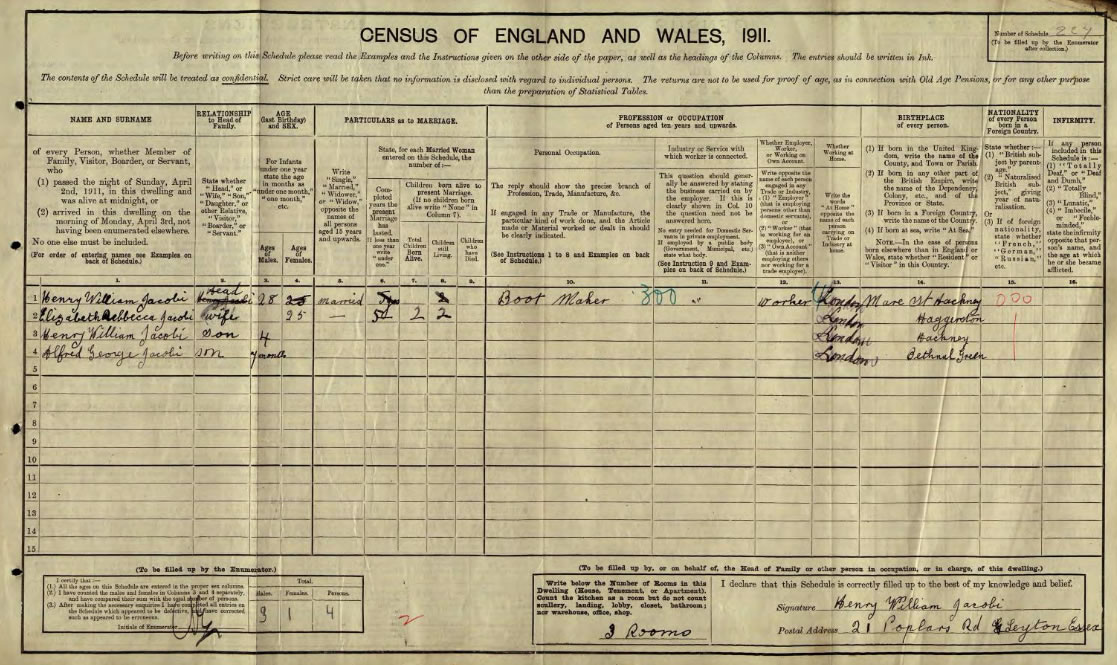 Henry William Jacobi in the 1911 Census

Executive Producer for Wall to Wall, Colette Flight, says: "Who Do You Think You Are? is back with another fantastic line-up of much-loved faces, uncovering hidden history by bringing our celebrities' ancestors to life. Following our best-known stars on their personal journey into their family trees reveals extraordinary stories, sometimes tragic, sometimes funny, but always compelling."