Frances De La Tour - Who Do You Think You Are?

Society scandals, an illegitimate child, and a landmark divorce...

Frances de la Tour is an actress who is known for her many appearances on TV, in Film and on the stage. Born on the 30th July 1944 in Bovingdon, Hertfordshire with the slightly different surname from what she is known as today. Frances De Lautour is the daughter of Charles De Lautour and Moyra Fessas.

Looking for her parents marriage in the BMD indexes on TheGenealogist we can locate the wedding as having taken place in 1944 in Marylebone, London.

Using the link from the transcript to see the actual pages of the index provides an interesting entry where there appears to be two surnames given for Charles' spouse. Frances' mother's last name is noted to be "Bishop or Fessas". 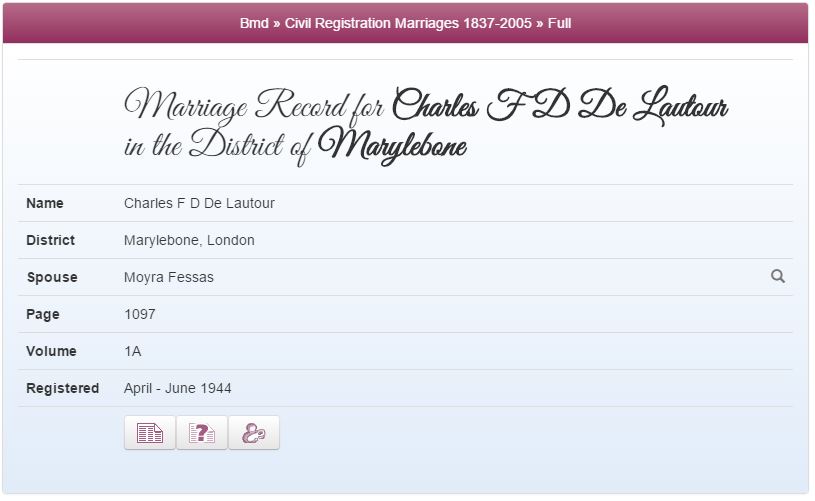 The explanation for this type of entry is that the surname Bishop is from her previous marriage to Harry M. Bishop, while Fessas had been her maiden name. Searching the records of marriage we are able to discover that this previous wedding took place in the Kensington district of London during 1936. 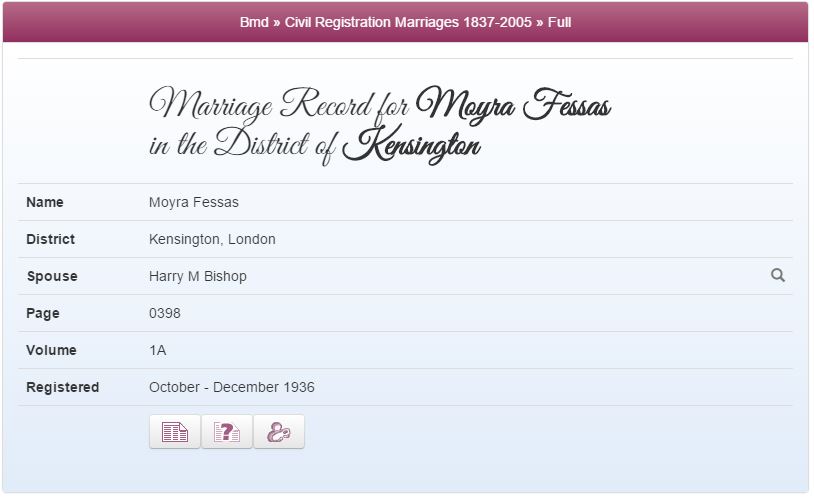 With the name of Frances' mother having been revealed from the marriage details as Moyra Fessas, we are now able to discover her in the birth records for Hampstead in 1919. These reveal that Frances' maternal grandmother's surname was O'Neill. 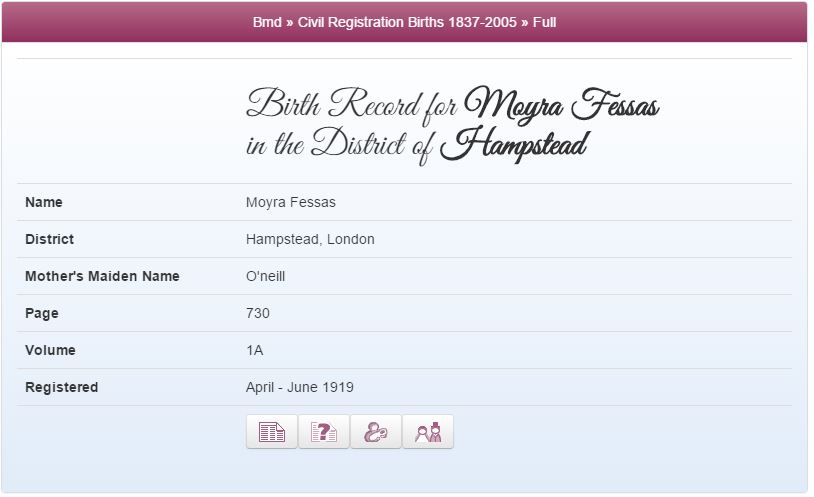 We have found the Fessas family in the 1911 census of Marylebone. Here the head and his eldest son were born in Macedonia and worked in the family tobacconist business. This would seem to be Frances' grandfather and great-grandfather. It can be seen from the census that Ida Fessas, wife of George and mother of Constantine, was born in Brockenhurst in Hampshire and that their two youngest children were born in London. The eldest child, Constantine, however, was born in Macedonia, like his father. Their nationality is recorded as Greek. 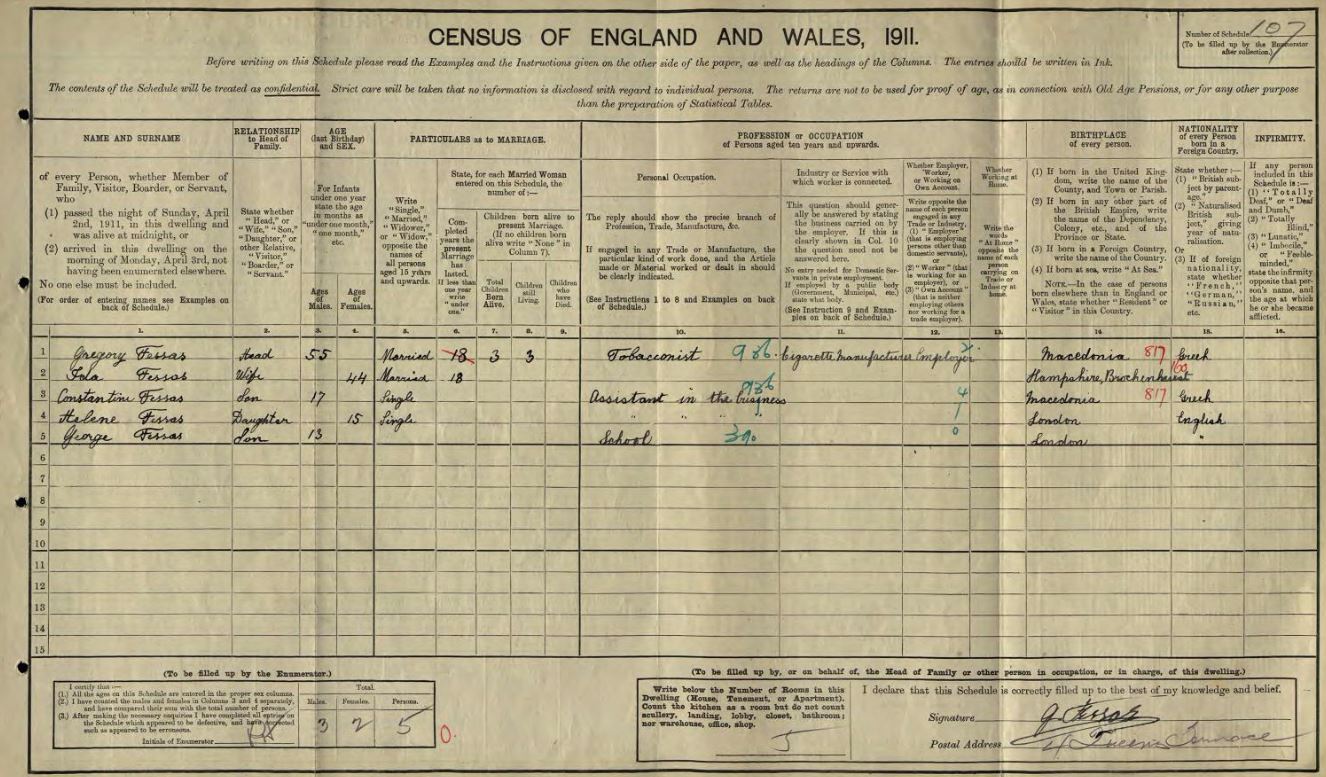 Frances' father, film producer Charles Percival de Lautour, was born on the 27th September 1909 in Vancouver, Canada, the son of Percival de Lautour, an engineer born in Australia, but of French nationality and working in Canada. It is his mother Edith Jadis (Frances' 2 x great grandmother) whose line provides a great deal of colour to the family story.

Our researchers have discovered that she was the daughter of the Reverend John Jadis (1807 - 1863) Vicar of Humbleton, Yorkshire, by entering her name in the Master Search and selecting the 1851 census.

It appears that the good Reverend's father, Henry Jadis, may have ignored one of the Ten Commandments in his early liaison with the vicar's mother and carried on an adulterous affair before she was divorced and able to marry him. From written accounts Henry Jadis married Maria Elizabeth Adderley in 1805, but this union only occurred after she had been divorced by her previous husband after the birth of the clergyman's elder brother, Henry Fenton Jadis.

In an 1824 case of Adulterine Bastardy, brought before the House of Lords, the facts came out in the claim to the Barony of Gardner. This occurred after the death of the second Lord Gardner, Alan Hyde Gardner, in 1815 and Henry Fenton then achieving the age of majority. The Lord had left his son by his second marriage, Alan Legge Gardner, as his heir to the Barony and now Henry Fenton Jadis, having taken to using the surname Gardner, was in contention for the Barony.

The Honorable Alan Hyde Gardner had been a Captain in the Royal Navy before he himself had inherited the title as the second Lord Gardner. His first marriage had been to Maria Elizabeth Adderley and in 1802 she had given birth to her first son, Henry. The child, however, was thought not to be the Captain's, though at first she tried to pass the boy off as her husband's son.This was to prove difficult because of the timing of the birth. Captain Gardner, commanding the Resolution, had sailed into Portsmouth at the beginning of 1802 and was joined by his wife at that time. Maria stayed with him three weeks before she departed for London on the 30th January. On the 7th February the Captain and his ship sailed for duty in the West Indies and did not return to the shores of Britain until the 11th July.

It was on the 8th day of December 1802, however, that Mrs Gardner gave birth to a son. For him to be legitimate, he must either have been born as early as five months into the pregnancy, or have been as late a birth as ten and a half months after conception. There were many reports on the case including one in The Lancet, because of its interest in the medical evidence offered to the House of Lords on the normal term of gestation in humans.

From the background details given in this piece we learn that the Gardner's had married in 1796 at Fort George in the West Indies. In the Court of King's Bench an action was brought by the Hon Alan Hyde Gardner against Henry Jadis Esq for Trespass, assault and criminal conversation with Maria Elizabeth Adderley and the plaintiff (Capt. Gardner) won one thousand pounds damages, plus the cost of bringing the case. Then in the Consistory Court of the Bishop of London, Capt. Gardner obtained a divorce in June 1804 with the Royal Assent coming through in July 1805. This allowed his former wife and Henry Jadis to marry in that same year.

However this is not the end of scandal to be found in Frances's family as we move back up the family tree. The next to be unearthed involved Henry Jadis' father John Maximilian Jadis and his marriage into the Delaval family of Doddington Hall in Lincolnshire. Researchers have discovered that in the parish registers for that parish a little piece of fiction was introduced to cover the family's embarrassment in 1778.

The birth of Henry was recorded first as the son of Henry Devereux Esq. of Burdeux in France by Sophia (Delaval erased) Devereux, daughter of Sir John Hussey Delaval, Bart. of Doddington Pygot. The story was that she had married Devereux without her parent's consent and become pregnant. Sophia and her married sister travelled to Flanders where her father paid her an allowance to support her and her child, plus her servants. By 1770, however, Sophia turned up in London with the child claiming that she had, in the name of Devereux married John Maximilian Jadis in a Roman Catholic church in Brussels. He was four years younger than his bride and had claimed to be a young gentleman on his travels in Europe. In fact he was a poor junior officer of the 59th Foot who was on the run from his creditors and the army.

Sophia's father, Sir John, had a lawyer look into the young man but not getting to the truth he insisted on regularising the marriage. It was agreed that the two should marry again in London, as the marriage abroad was considered to be invalid. Introduced into the family John Jadis caused trouble by challenging his brother-in-law to a duel. It ended with him being asked to leave by Lord Delval, as Sophia's father had by now become on inheriting the title. Six years into the marriage the couple were no longer together and Lord Delval paid off his erstwhile son-in-law to stay out of London.

In the programme Frances was able to use the parish records found on TheGenealogist to see that her 4x great grandmother, The Honorable Sophia, died and was buried in the Parish of Doddington-Pigot on the 2nd August 1793. 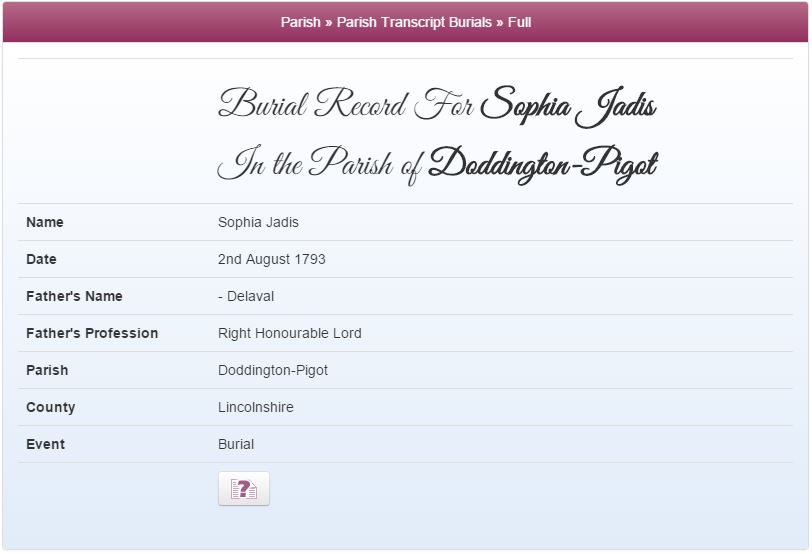 Frances's family takes us back to her 5x great grandfather, Lord Delval who was forced to support his daughter Sophia, and her son Henry who had been born out of wedlock. The child's original baptism under the name Devereux, the subsequent Catholic marriage in Brussels of his parents and then again in a Church of England church in London certainly marks this story as being out of the ordinary. The eldest child of Sophia and John Jadis grew into a man and then brings more scandal into the family with his extramarital affair and the fathering of his own illegitimate child with the wife of Captain Gardner, heir to the Barony of Gardner, and causing a scandalous court case followed by a milestone divorce.