Mark Gatiss - Who Do You Think You Are?

A passion for the ghoulish in his genes...

Mark Gatiss is someone who has always enjoyed storytelling with a particular passion for the ghoulish and so it comes as no surprise that it is in his genes. Researching his family history back five generations in Northern Ireland he found a tale of rags to riches for one member of his family and that he is descended from storytellers who just may have possibly been vampire slayers! 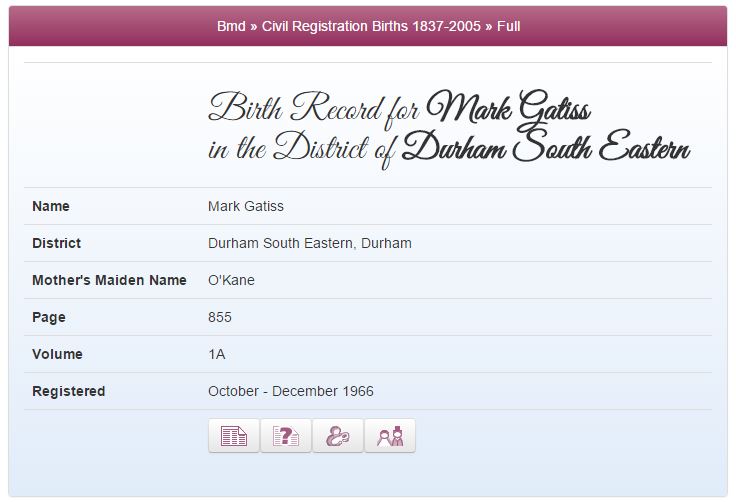 In the Nineties Mark published several Doctor Who novels, which in time helped to bring him to the attention of Russell T Davies, the producer of the Doctor Who TV series when they were relaunched in 2005. Mark has both written episodes for and acted in the TV series and also in Sherlock, while being the co-creator of the latter. He is also known as a member of the comedy team The League of Gentlemen. It was while he was at Bretton Hall drama college in West Yorkshire that he met the other three members of The League of Gentlemen. This was in 1997, just two years after their stage debut when they won the Perrier Award at Edinburgh.

His father's line, from his grandfather backwards for several generations are coal miners from Auckland while his mother's family are from Ireland.

In 1901 we find Mark's grandfather in his father's householder. Mark's great-grandfather is a Coke Drawer, which means he drew the coke up the mineshaft.

Mark's parent's Maurice and Winnie married in 1957, as we have discovered using the Marriages records on TheGenealogist. 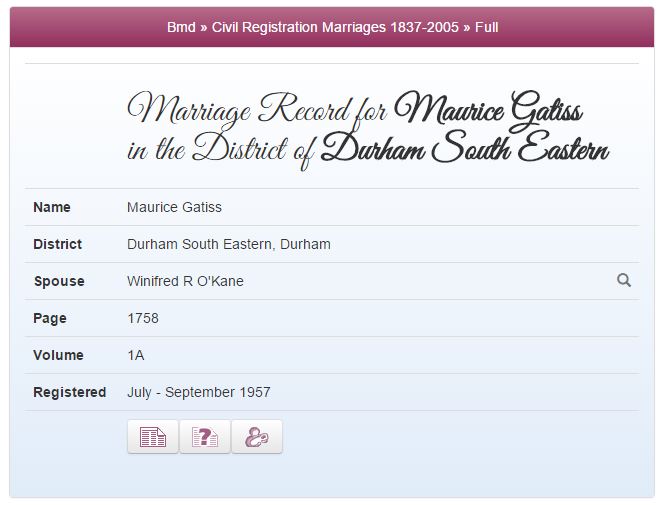 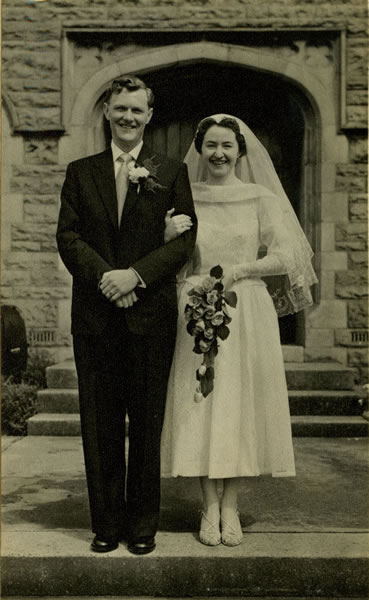 Mark's mother was an O'Kane and her family came from Londonderry/Derry in Northern Ireland. Research in the city's Guildhall has discovered that Mark's great, great grandfather owned a lot of land in Co Derry.

As part of the research on the O'Kane clan we have found that there is a link to a famous Co Derry vampire legend ­- something that the writer with his love of horror and ghost stories finds is right up his street. Mark has always wondered whether his love of the ghoulish came from his mother's side. Derry's connection with the traditional vampire story centres around the legend of Abhartach, a magical dwarf from south of the county, who rose from the dead, demanding blood from terrified villagers.

Abhartach was a tyrant who terrorised the people of south Derry until he was killed by a local chieftain, possibly named Cathrain. This name is thought to be a corruption of O Cathain, or O'Kane, which was Mark Gatiss' maternal line's surname.

During research, Mark we discover has a connection with the name O'Mullen/O'Mullan through the association between the O'Kanes and O'Mullens. For someone who is celebrated for his writing skills, Mark is fascinated by his O'Mullen connection and particularly that of George O'Mullen. "George O'Mullan was a brilliant storyteller," he says. "I don't want to over romanticise it, but it sort of feels like, maybe, that's where I get it from. Somehow there's a little slant towards all that which comes from being of this stock going way, way, way back."

Mark's great-great-great-grandfather, George O'Mullan, was a land steward in the 1820s. He faced danger from the neighbouring tenants when they protested against their absentee British landlords. But a change in fortune for George's son Jeremiah puts a big smile on Mark's face and he's even happier when he visits the old family Townland, Ashlamaduff.

Within the Griffiths Valuation of Ireland on TheGenealogist, printed in August 1858, we have found George O'Mullen and several others as the occupiers of house, offices and land in Ashlamduff. While over the page is a mountain! 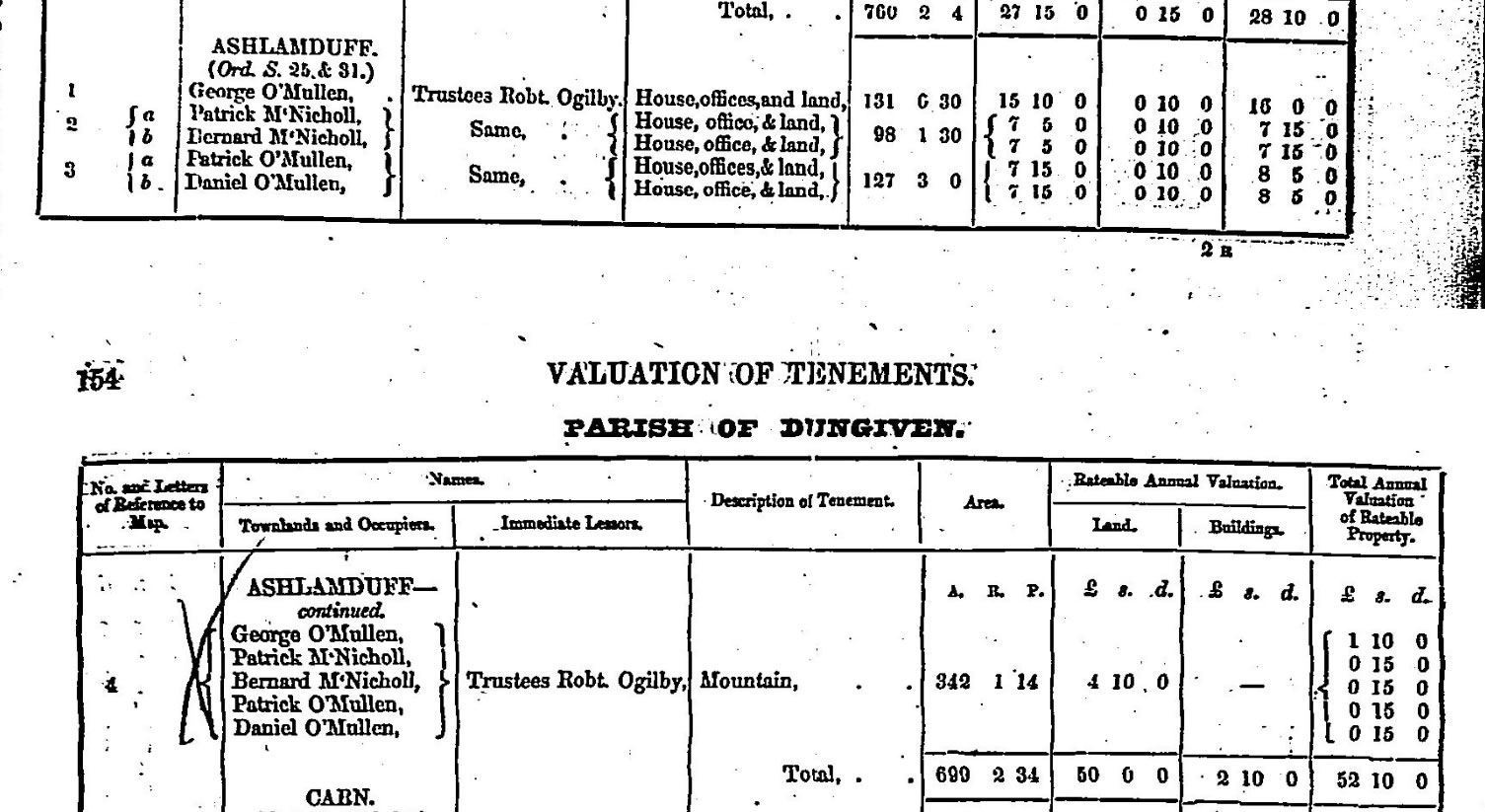 Griffiths Valuation of Ireland on TheGenealogist

Mark Gattis, the actor and writer is a mixture of English and Irish. Descended from miners in Durham and a Land Steward, whose son made it good and became a landowner in Northern Ireland. Mark's obsession with horror films and ghost stories seems to be passed down to him from his Irish O'Mullen ancestry on his mother's side.