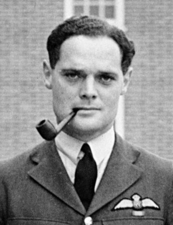 Douglas Bader originally joined the RAF in 1928 and was commissioned into the service on the 26 July 1930. He became a pilot officer in No. 23 Squadron RAF based at Kenley, Surrey where he flew Gloster Gamecocks and soon after the Bristol Bulldog. Bader was a confident pilot and became a daredevil while training there. He often flew dangerous stunts that were against the strict RAF orders that forbid unauthorised aerobatics below 2,000 feet, however Bader considered this an unnecessary safety rule rather than an actual order to be obeyed.

After one training flight at the gunnery range, Bader, having only achieved a 38 percent hit rate on a target, was on the receiving end of jibes from pilots from a rival squadron. Riled by the barbs, he took off to perform aerobatics and show off his pilot skills. Being against regulations, the CO of the other squadron remarked that he would have had Bader court-martialed if he had been one of his pilots. Bader's own unit gave their pilots more latitude, although encouraged them to recognise their own limits.

In December 1931, while on a visit to the Reading Aero Club and apparently on a dare, Bader attempted some low-flying aerobatics at Woodley Airfield in a Bulldog of 23 Squadron. His luck ran out and his aircraft crashed when the tip of the left wing touched the ground. Bader was rushed to the Royal Berkshire Hospital, where the prominent surgeon J. Leonard Joyce was forced to amputate both legs of the pilot - one above and one below the knee. Bader made the following laconic entry in his logbook after the crash:

Determined to recover after his recuperation, Bader went back and retook his flight training, passed his check flights and then requested reactivation as a pilot. Although there were no regulations applicable to his situation, he was retired against his will on medical grounds and left the RAF to work for an oil company that became known as SHELL.

After the outbreak of the Second World War in 1939, however, Bader returned to the RAF and was accepted as a pilot. He scored his first victories over Dunkirk during the Battle of France in 1940. He then took part in the Battle of Britain and became a friend and supporter of Air Vice-Marshal Trafford Leigh-Mallory and his "Big Wing" experiments, a tactic that involved meeting incoming Luftwaffe bombing raids in strength with a wing-sized formation of three to five squadrons.

From the RAF Officers listed in the recently released Second World War Prisoner of War lists on TheGenealogist, we can find Acting Wing Commander Douglas Bader, whose story was immortalized in the book and film Reach for the Sky.

On 9th August 1941, Bader, a formidable air ace, was flying a Spitfire on patrol over France when he was forced to bail out over German-occupied territory. He had jettisoned the spitfire's cockpit canopy, released his harness pin, and the air rushing past the open cockpit started to suck him out. Unfortunately for Bader, his prosthetic leg was trapped in the plane and he was part way out of the cockpit but still attached to his aircraft. Bader and his aircraft fell for some time before he released his parachute, at which point the leg's retaining strap snapped under the strain and so he managed to get free of the plane. Captured, the Germans treated him with respect and even gave the British free passage to drop off a replacement leg for Bader over a German occupied French airfield.

Bader didn't appreciate being a prisoner of war and made a number of escape attempts. Because he was considered likely to break out again by his captors, he was eventually sent to the infamous Colditz Castle - as we can see from the record on TheGenealogist, it shows he was incarcerated in Camp No: O4C which relates to Oflag 4C Saalhaus Colditz. It was here that Douglas Bader remained for the rest of the war until April 1945 when the camp was eventually liberated by the United States Army. 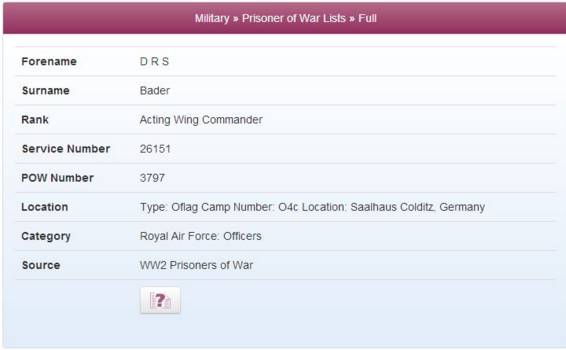 Douglas Bader in the WW2 PoW Records at TheGenealogist

His name can be seen on the Battle of Britain War Memorial on the Victoria Embankment. A record, plus an image of this memorial, can be found on TheGenealogist amongst other military records that also include mentions of Douglas Bader in the various Air Lists. 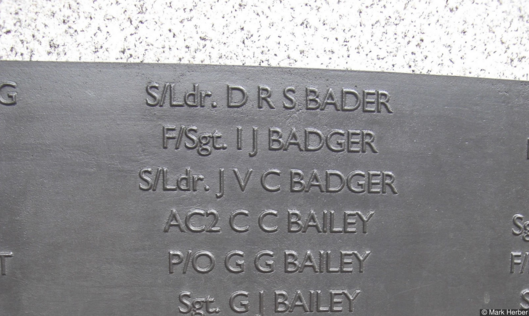 Douglas Bader in the War Memorials at TheGenealogist