The Battle of the Somme began on the 1st July 1916 and was to last until the 18th November. The statistics for this bloody conflict are staggering: 141 days of battle; 1,700,000 shells fired on to the German lines; 57,470 British casualties for the first day alone, of which 19,240 British soldiers had been killed. In total the Battle of the Somme would claim 419,654 British; 204,253 French and 500,000 Germans. In amongst these facts and figures was another - the oldest soldier to lose his life at the Somme was 67 year old Lieutenant Henry Webber.

TheGenealogist's Casualty Lists in the military records collection allows us to quickly find Lt. Webber reported as Died of Wounds in The Times of the 15th August 1916. 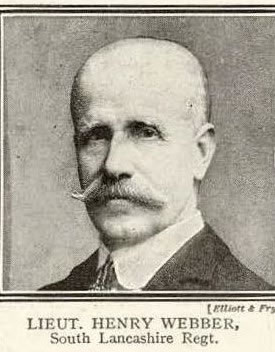 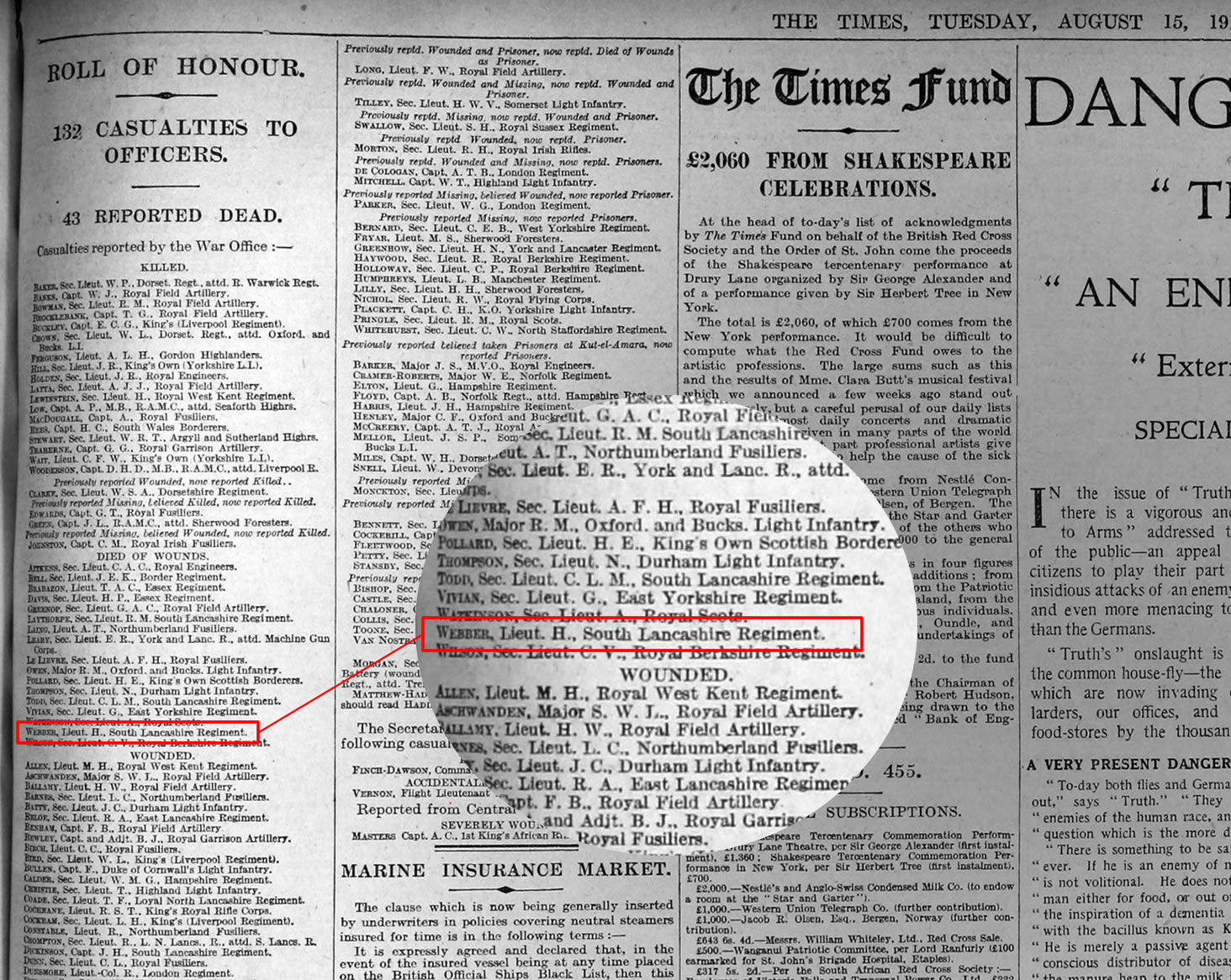 Casualty Lists as found on TheGenealogist

This highlights to the researcher that there can be a delay before the announcement of a death was made in the official casualty lists in the newspapers. In this case we know that more than three weeks passed after his actual death on the 21st July 1916 - as seen on the date noted under "Remarks" on his campaign medals record card on TheGenealogist.

We can also find Henry in the 'Mentioned in Dispatches' records on TheGenealogist. In Henry's case these reveal that he was gazetted on the 4th January 1917, nearly six months after he had died of his wounds in France. 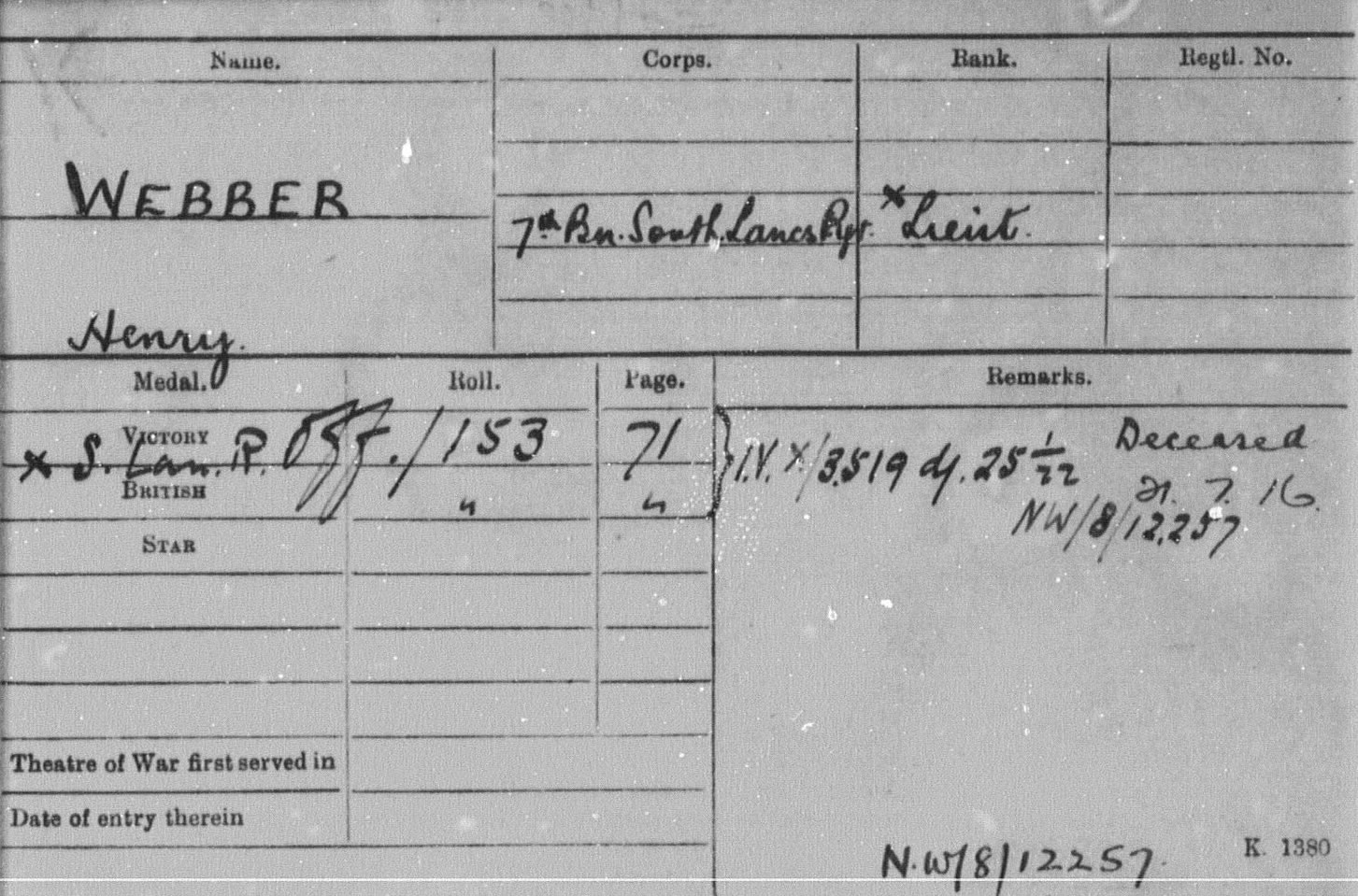 The Roll of Honour records on TheGenealogist will often enable us to find out a lot of useful background information on a Great War soldier, as is the case with Henry Webber. There are two Rolls of Honours we can consult for this officer. The Oxford University Roll of Service provides us with some details, such as his date of death in France, but the Roll of Honour for Tonbridge school is a goldmine with a very full account. 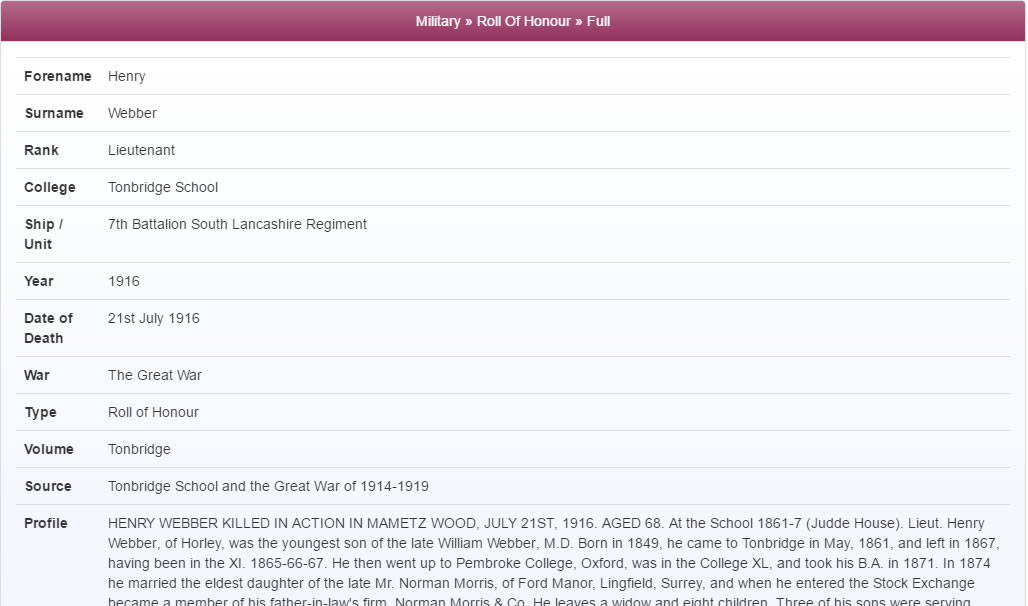 Rolls of Honour at TheGenealogist

From the Profile section we can discover that Henry was killed in action in Mametz Wood on July 21st, 1916. It reveals that he was from Horley and the dates when he was at Tonbridge school. Also detailed is that he was the youngest son of a Doctor, the late William Webber M.D. having been born in 1849. After his time at the school he then went up to Pembroke College, Oxford and took his B.A. in 1871. In 1874 he married the eldest daughter of the late Mr. Norman Morris, of Ford Manor, Lingfield, Surrey, and when he entered the Stock Exchange he became a member of his father-in-law's firm, Norman Morris & Co.

The 1911 census records his occupation as a Member of the London Stock Exchange and we are able to note that his home was large enough, with 25 rooms, to have several live in domestic servants. 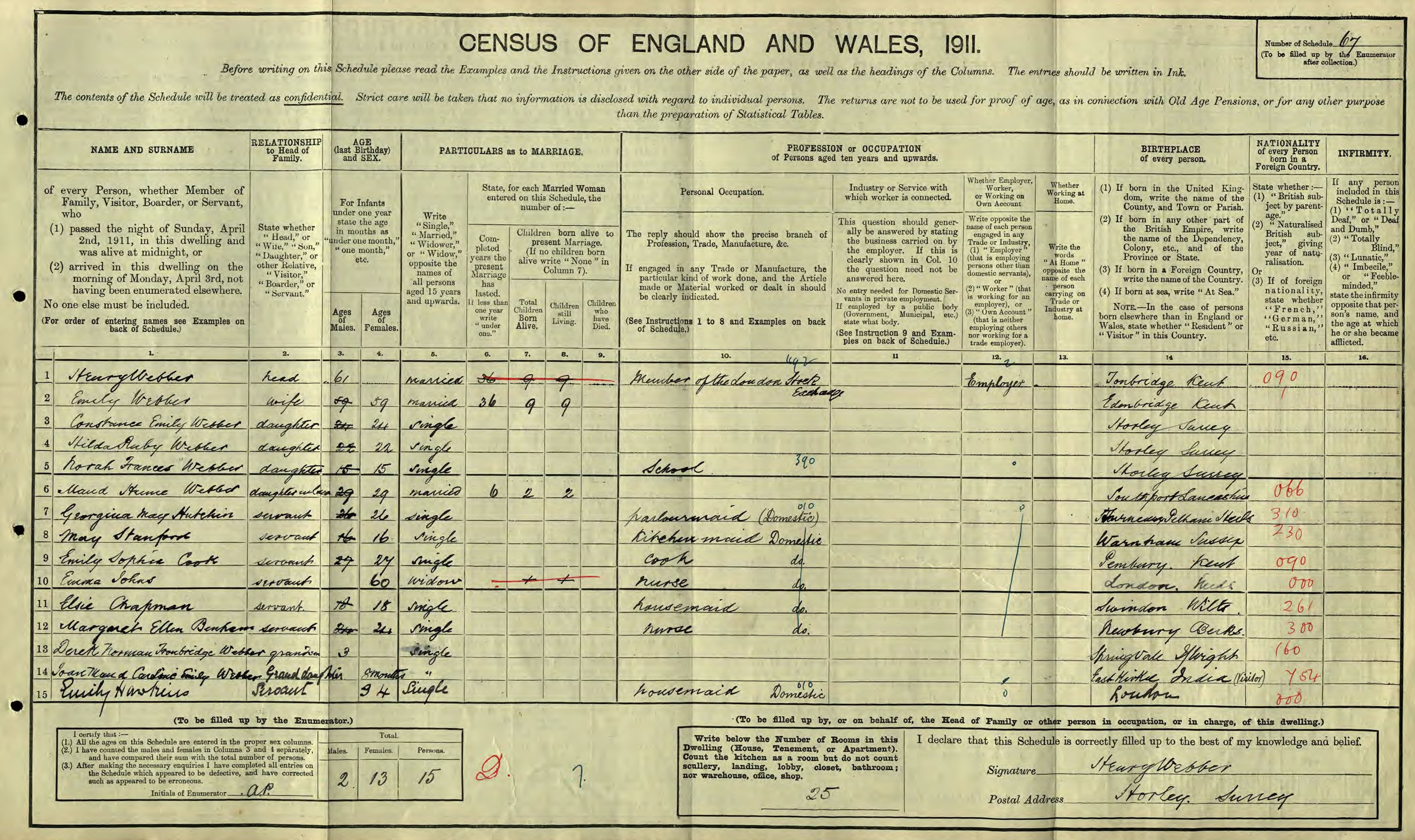 Henry Webber had been a keen sportsman throughout his life and could be relied on to support all types of sport in East Surrey. He was a respected cricketer and when over 55 years of age he played an innings of over 200 for his cricket club at Horley. A good shot, he also enjoyed hunting and had been a leading member of the Surrey Stag Hunt. The profile goes on to explain that "many stories had been told of his vigour and activity, showing that no exercise, even at his mature age, was too much for him." Henry Webber threw himself into many aspects of public life within the Horley district where he lived. He was a Justice of the Peace for Surrey, an original member of the Surrey County Council and for many years churchwarden of the parish church plus the honorary treasurer of the Cottage Hospital. When the war came, Henry took a prominent part in the recruiting campaign in his area. He publicly declared that he had offered his rough-rider horsemanship skills to the War Office, or to serve his country in any other capacity that they required. In spite of his 66 years he set his sights on obtaining a commission in the army, though the military were not that sure that they required his services. After somewhat of a struggle to be accepted, but on account of his knowledge of horses, he was gazetted to the South Lancashire Regiment as a Temporary Lieutenant on 1st May 1916, and then was appointed to the horse transport for the Battalion.

At the time of his death the Roll of Honour tells us that Henry Webber left a widow and eight children. Three of these offspring were sons who were serving in the British Army and, to his amusement, all three of them outranked him. Henry went out to France in May and on July 17th he wrote a letter to a friend from which the following extract was quoted in the July school magazine of that year:

"Fifty-one years ago I got my colours in the XL, and last week 51 years I was bowling. the Old Boys and looking upon some of them as sitters' and in the ' sere and yellow leaf,' and here I am a Lieut, in H.M. Army, having to salute three sons if I meet them out here a Colonel and two Majors. I am 1st Line Transport Officer to this Battalion, and we have been plumb in the centre of the picture during the last ten days and gained no end of kudos and also a very severe mauling. We have been resting for a week and refitting, and are at them again to-morrow. I am so far extraordinarily fit and well, though, when I tell you that for four consecutive days I was either on my feet or in the saddle for twenty-one hours out of the twenty-four, you will see that there is a bit of work attached to the job. There was an obstinate obstacle that resisted three efforts by others, and our boys eventually took it. They were simply splendid, and now after a rest they are as keen as well, as a schoolboy to be put on to bowl."

Before this letter was received by his friend, Henry Webber had already lost his life. On the afternoon of July 21st he had taken up the rations for the Battalion and was having a conversation with his Commanding Officer in Mametz Wood at about 6 p.m. A shell exploded behind them and a fragment struck Lieutenant Webber in the head. He was rushed to the advanced dressing station to receive medical attention to the wound. Then, still unconscious, he was transferred to the nearest field hospital where he died soon after his arrival. Henry Webber laid down his life for his country, having fought hard to be able to serve in a war zone in spite of his advancing years. With his death he inadvertently became another sad statistic of the Battle of the Somme: the oldest British soldier to die.