From petty thieves to the man who murdered the Prime Minister...

Family tree research is made much more interesting when an ancestor's story reveals a captivating character. One of the record sets that can add a fascinating nuance to a family tree are Criminal Records, should you find an ancestor's name within them. To discover that someone from your past family came up against the law and to learn if they were found blameworthy or not is exciting. Take the example of William Warren in 1829 who was charged with 'Stealing a pint of peas'. He was one of the lucky ones in that he was found by the court to be 'Not Guilty' and so could get on with his life.

Some of those who were convicted received punishments that would today bring a lump to the throat, such as the case of 63 year old Joseph Powell in 1814. Not only had he been incarcerated but he had also suffered physical punishment as well for his previous offence. Having been adjudged in 1808 to be 'an incorrigible Rogue', under a law made in King George II's reign, his crime was that he had been telling the future. His astrology skills saw him punished by a term of one year inside prison and was also 'openly whipped at a cart's tail'! Unfortunately for the authorities Joseph was not deterred or rehabilitated by his sentence, as we can read from the image attached to these records that he 'Did afterwards feloniously offend again in like manner'.

Some convicts, who would once have lost their lives if found guilty of a number of crimes, were in later years sentenced to transportation. This meant that they had to be imprisoned somewhere before sailing for the penal colonies in Australia. The newly released records on TheGenelaogist include those from ADM 6 which lists the names of those who were locked up onboard a number of prison hulks awaiting transportation. As an example we have the Highway Robber, James Smith. On the 6th July 1826 he was convicted at Bedford and we can catch up with him as being one of the inmates of Bedford Gaol transferred to the Hulk Dolphin twenty days later. Clicking through to the image of the register there is more information to be had. In this case we can see that the gaoler's report notes that the prisoner had been 'indifferent before and after his trial' and that he had been 'several times in custody'. In some cases we can also see, from the image of the record, the date of discharge from the prison hulk and also which ship the convict was then dispatched on to Australia. Our Highway robber, James Smith, was transported for life on the 17th September 1826 onboard the ship Albion - having been locked up until then on the prison hulk since the 26th July of that year.

With the increase in transportation instead of death, an imbalance occured between supply and demand of executed criminals and this had an effect on the training of surgeons. The bodies of hanged criminals were the only legal cadavers that could be dissected - but now they had a problem and criminals stepped in to fill this gap. By searching these newly released records on TheGenealogist we can find an entry for Richard Curle. He was tried in May 1841 for 'unlawfully opening a Grave for the Purpose of Taking Up A Dead Body, And Breaking Open The Coffin'. The penalty handed out to him was one year in the County Gaol.

Using these new records finds us the case in May 1812 of the notorious John Bellingham who murdered the Prime Minister of the United Kingdom, The Right Hon Spencer Perceval. His sentence would see him hanged in public and then turned over to the surgeons. 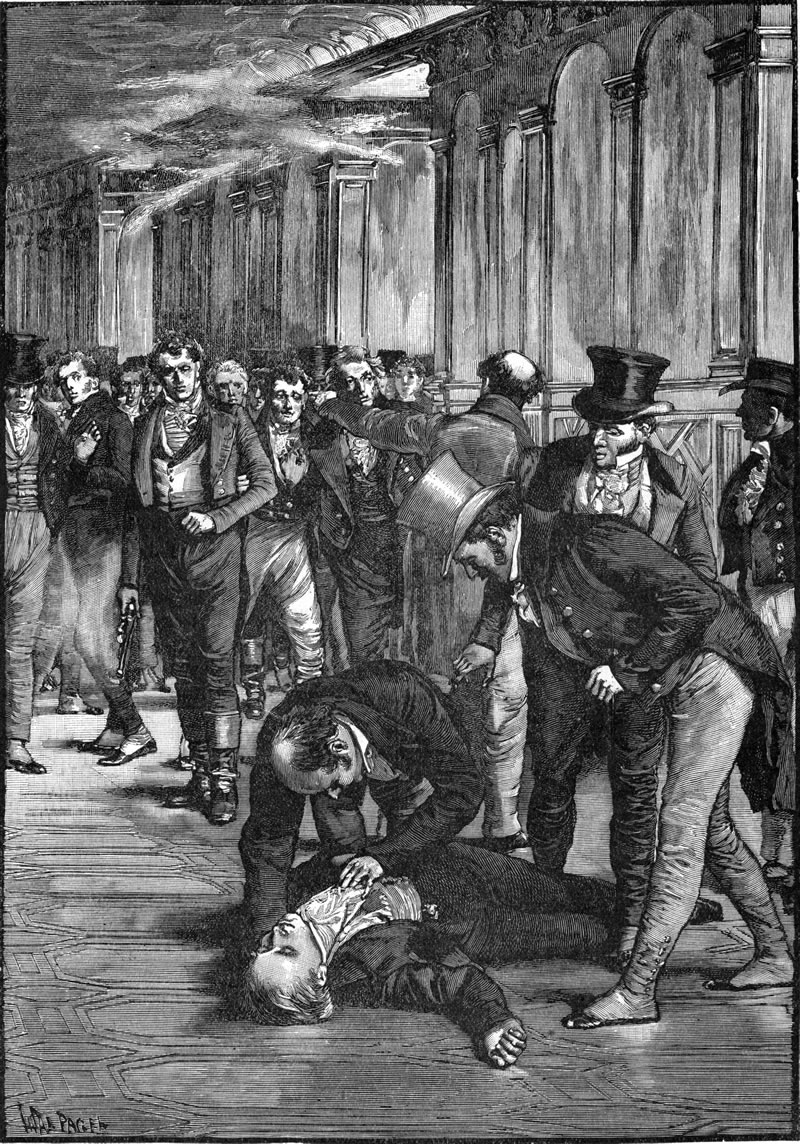 The murder of the Rt Hon Spencer Perceval 1812

A search for Bellingham in the records on TheGenealogist finds his start in working life as a 14 year old apprentice to James Love, a Citizen and Haberdasher in 1783. In the early 1800s as a middle aged man he then travelled to Arkhangelsk in Russia as an export representative.

The seeds of his untimely demise at the end of the hangman's noose stretches back to the loss of a Russian ship that had been insured at Lloyd's of London. An anonymous letter was sent to Lloyd's that claimed that the ship had been sabotaged - which the ship owners thought that Bellingham had written. They retaliated by accusing him of an unpaid debt and so caused his travel pass to be withdrawn and the local Governor-General to imprison Bellingham in a Russian jail. After serving his one year sentence inside, Bellingham was released and he made his way to St Petersburg where he endeavoured to have the Governor-General impeached. The Russian authorities, not being impressed with this slur, charged Bellingham with leaving Arkhangelsk in a clandestine manner and so he was imprisoned once more. At the end of his second term of imprisonment in Russia he was released in October 1808 - but still without permission to leave. In some desperation, he petitioned the Tsar and was finally allowed out of Russia in 1809 to go home to England.

John Bellingham was an unhappy man when he got home and soon turned to the British government asking for compensation. Because the United Kingdom had broken off diplomatic relations with Russia in 1808, however, this recompense was refused him. Years of trying to gain satisfaction saw him as a regular visitor to the Houses of Parliament and so it was that on the 11th May 1812 Bellingham visited the Palace of Westminster as usual, but this time armed with two pistols. In the lobby of the Commons he took out his gun and assassinated the P.M. - then he sat down and waited for his own arrest.

Justice was swift as can be gleaned from the records on TheGenealogist. His trial took place on on the 15th May before Sir James Mansfield, whose surname is entered in the right margin of the page. We can also note that the prisoner John Bellingham was aged 42 at the time.

John Bellingham's murder trial on the 15th May 1812

The next document, returned in our search for Bellingham, is also from the HO 77 records. This lists the judgements handed out in Middlesex in May 1812 and shows that Bellingham had been executed just three days after his trial and only seven days since he committed the crime. 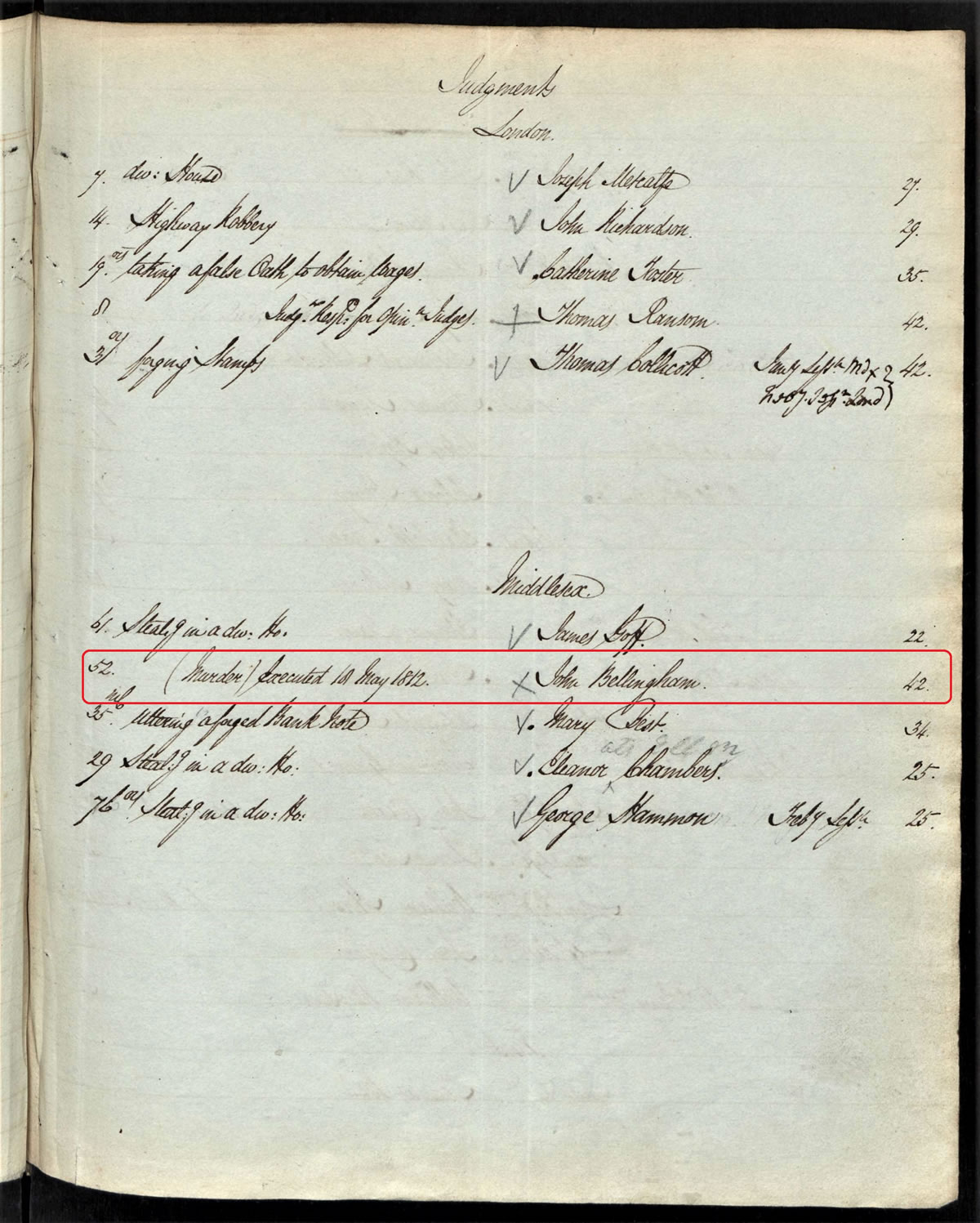 A third return, from our search on TheGenealogist, links to an image of a printed entry in the Newgate Calendar, also in HO 77. This reveals a number of prisoners that had been executed in that month, but Bellingham has the distinction of being given an extra punishment post-mortem. The records divulge that he was 'hanged by the neck until he be dead, and his body delivered over to the Surgeons to be dissected and anatomized, pursuant to the statute etc.' 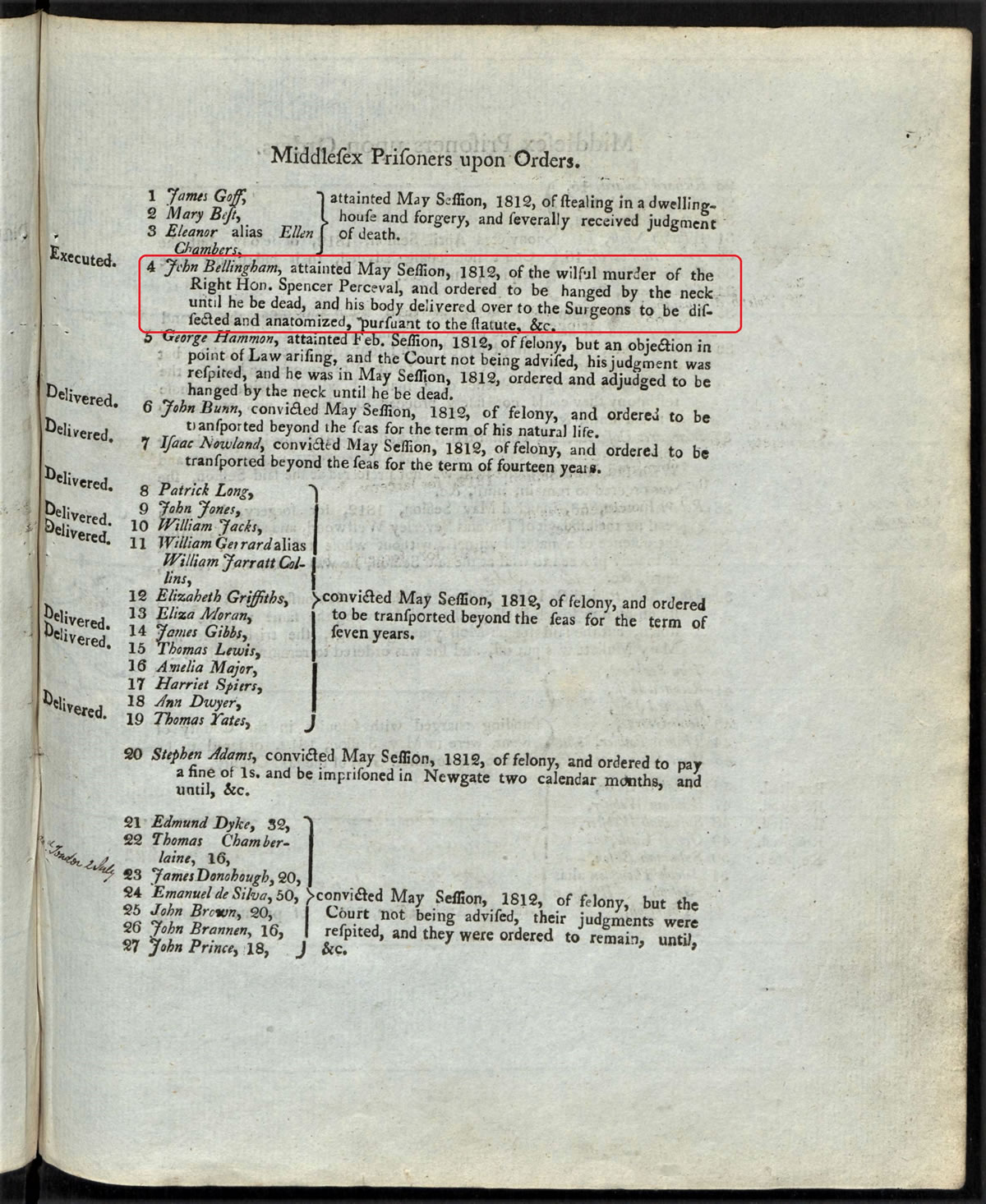 Sentences for 1812 in HO 77 records on TheGenealogist

In conjunction with those Criminal and Court records that were already available on TheGenealogist, this is a fascinating set of records to look for miscreant ancestors and discover more about what happened to those that came up against the law in times past, whether they were a victim, convicted of a crime or found not guilty.