The 1920s decade of Outbound Passenger Lists reveal our ancestors' travels, as well as those of many famous individuals

Records that chart our ancestors' international journeys can be really useful for building the stories of their lives. The documents can help explain where an ancestor has gone when we can't find them in the records at home, and it is certainly not just the top echelons of society that appear in passenger lists. In the past all sorts of people booked passages on ships for a variety of reasons. Perhaps they were emigrating for a better life or travelling abroad on business? For this reason we can find the voyages of our ancestors ranging from Labourers to Lords and Artisans to Authors.

TheGenealogist has just added another decade of the always intriguing BT27 records to its growing number of Passenger Lists. These fully searchable records were originally kept by the Board of Trade and listed the details of outbound passengers from U.K. ports. With this release we can now find voyages going across the Atlantic to North America and to the countries of the Empire and beyond. A search of these records can reveal our forebears departing from this country and in amongst their numbers are also included a large number of famous names from the past.

This new release has the likes of Master Douglas Fairbanks Jr, aged 13, who became a famous film star, returning to the United States from a visit to England and travelling on the White Star Line's ship the Celtic. He is travelling with James and Betty Sally Evans. This appears to be a misrecording of his mother's name, Anna Beth Sully Evans and James is his stepfather. They were on a 21 day passage to New York departing from Liverpool on the 11th June 1921. We can glean from the passenger lists the ages of passengers, who they were travelling with, and the country of their intended permanent residence - all of which can be useful to our family history research when we find an ancestor in the results.

Researching in the passenger lists of this 1920s period of sea travel throws up many other famous names of the times. The 25 year old Harry G. Selfridge Jr, son of the founder of the London department store Selfridges, is one. We can also find the war poet Siegfried L. Sassoon and from the top ranks of the British Army there is Field Marshal Haig and Lt General Robert Baden-Powell, founder of the Boy Scouts. Turning to the world of politics we come across David Lloyd George, the Liberal politician who became the wartime Prime Minister. Here he is travelling with his wife, Dame Margaret and their daughter Megan who would herself go on to become the first female M.P. for a Welsh constituency. By using TheGenealogist's unique SmartSearch feature we can identify the family members travelling together on a voyage by clicking on the family icon.

On a voyage to Gibraltar in April 1927 we can find the 63 year old widow, Mrs Emmeline Pankhurst, the one time leader of the Suffragette movement. Without Mrs Pankhurst and her fellow suffragettes campaigning for the right for women to have the vote, then Megan Lloyd George would not have even been able to cast her ballot, let alone have had the right to stand for election to the House of Commons. 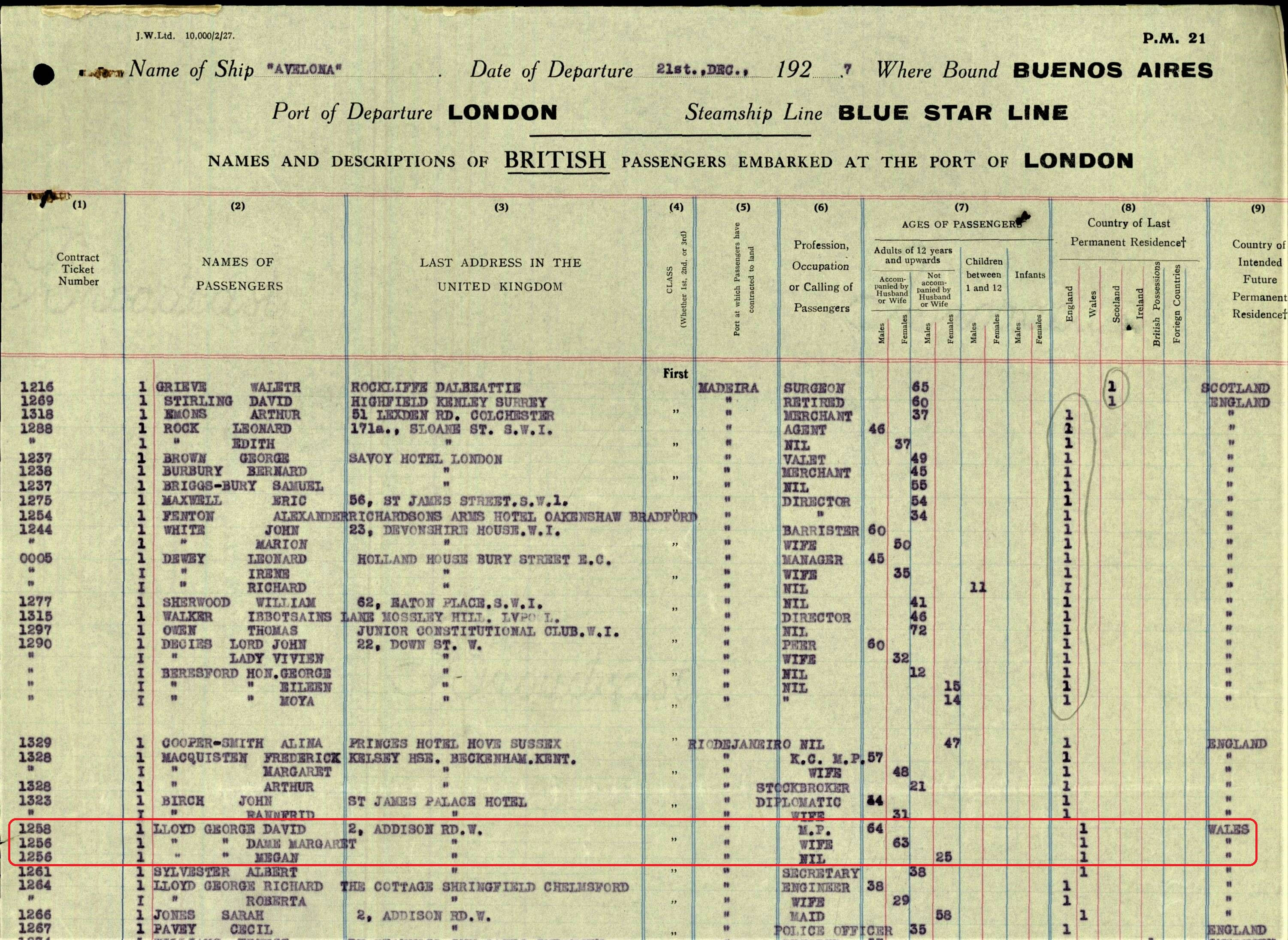 There are numerous authors to be found in these records. In February 1926 Hilaire Belloc, who was one of the most prolific writers in England during the early twentieth century, made the short hop across the channel from Southampton to Cherbourg. The 55 year old was onboard the Orduna, a vessel of The Royal Mail Steam Packet company on its way to New York. Belloc gave his address as The Reform Club SW1, but for others the passenger lists can reveal the details of an ancestor's home address before they travelled - information which can be very useful when there is no census to consult for the time period in question. For example, the entry for the 21 year old Noel Coward, travelling on the Southampton to New York run of Cunard's Aquitania that left on the 4th June 1921 - Coward gave his address as 111 Ebury Street London. This was the premises that his parents ran as a lodging house and it was where he kept a room while he travelled abroad. It was also the address where he wrote The Vortex, his first notable successful play. His occupation on the passenger list for June 1921 was that of an Actor. In later transatlantic crossings, however, he is sometimes recorded as a Dramatist, an Author and as a Playwright.

Searching for Sir Arthur Conan Doyle's sea voyages in this decade of BT27 Passenger Lists released by TheGenealogist, we see that the creator of Sherlock Holmes gives his address as 15 Buckingham Palace Mansions. This was actually the flat that the famous author and his second wife kept opposite the entrance to Victoria Station, although their main home was in Sussex and in other trips that address is recorded in the passenger lists.

Browsing the names of his fellow first class passengers, we can see that the Literary agent Eric Seabrooke Pinker was also onboard and we can wonder if the two men mixed on the voyage. The arts were well represented on this trip as also travelling on the same ship was the artist Augustus John. John was a Welsh painter, draughtsman and etcher who had been an important exponent of Post-Impressionism in the United Kingdom for a short time around 1910 and by the 1920s Augustus John was Britain's leading portrait painter. 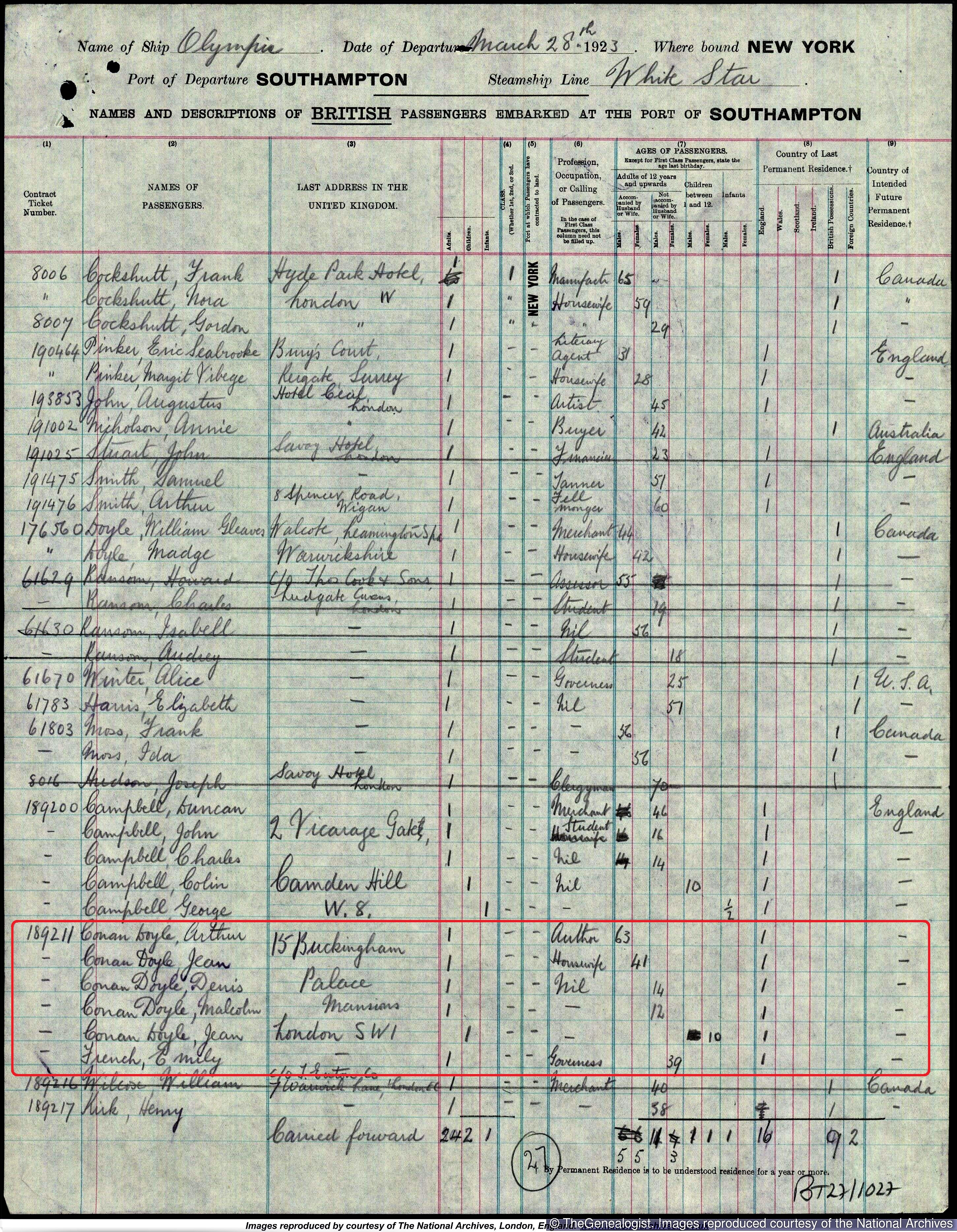 Passenger lists are certainly fascinating documents that can reveal our ancestors' overseas voyages and so help add detail to the stories of their lives. They can also be used to clarify where people have gone when we can't find them in the records at home, as it is all levels of society that can be found in these records. This particular decade seems also to be very rich in the names of the famous as they departed from U.K. ports on their overseas travels.