Flamboyant Businessman, friend of Royalty and an American President

With the latest release of IR 121 records from TheGenealogist, family historians now have an enthralling batch of Valuation Office survey records and maps to use in their research. Ranging from 1910 to 1915, this new release includes for the first time the detailed Field Books which include often fulsome descriptions of the actual properties in that period. Barnet is the latest area to join the already released City of London and Paddington records, and like those areas this release can pinpoint the exact property on a large scale map that is contemporary to the period, as well as supply information about the house. Known as the Lloyd George's Domesday survey to many researchers, these Valuation Office records were created to aid the government raise income from rates and was one part of Lloyd George's famous 'People's Budget' of 1909.

This resource can be really useful for the family historian searching for their ancestors' homes. This will especially be the case if the property has since been demolished, the road remodeled in some later redevelopment, or a major new route has been cut through the area since the survey was done. A modern map will not, in this case, identify where your ancestor lived and so these valuation records and maps from the period may be the answer for you to take your research forward.

The area of Barnet has a mixture of properties ranging from terraced houses to mansions and from farms to factories. This was a time before the M1 motorway had been built, but the Barnet by-pass was planned to cut through the area in the years just after the survey and so it can be witnessed by neat pencil tracks marked on some of the maps that make up this resource.

One of the residents of this area discovered in the new record set is the grocery and tea baron, Sir Thomas Johnstone Lipton. He was a Scotsman of Irish parentage, who was a self-made man, and as a child he had experienced living at the bottom of the scale in a tenement in Glasgow. The large mansion that we find him leasing in Barnet is far from his beginnings as by this time he was at the head of a successful business. His chain of grocery stores and his brand of Lipton teas was very well known internationally. He is reported to have put his success down to selling the best goods at the cheapest prices, the power of his advertising, and always being optimistic. 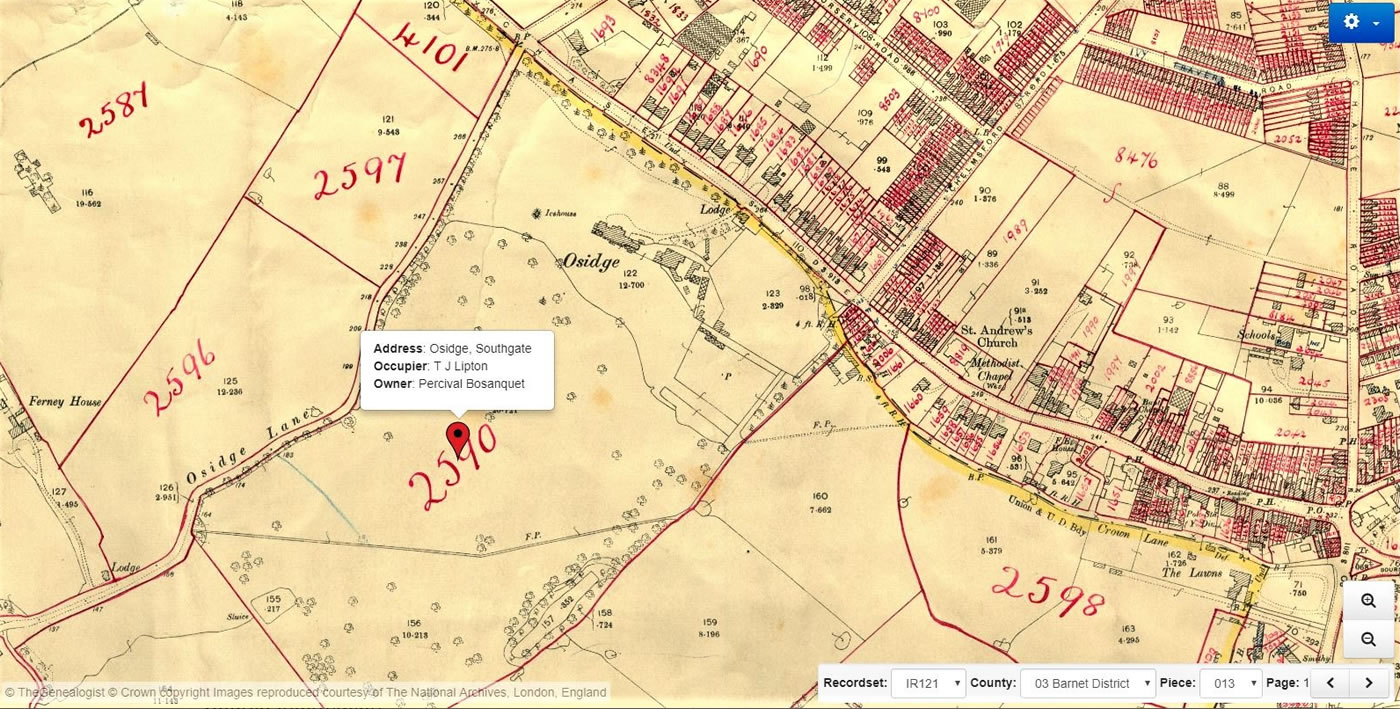 While living in a large mansion and enjoying considerable wealth, he was still known for his compassion for the poor and unemployed, carrying out charitable works and making donations. Lipton also used his money to pursue his love of sailing and was one of the most tenacious challengers in the history of the America's Cup, the competition challenge for sailing yachts. He also owned a 1,240 ton steam yacht named the Erin on which he lavishly entertained many prominent and distinguished people from both sides of the Atlantic, including President Roosevelt. During the First World War he fitted the boat out as a Red Cross Hospital for the war effort. Meanwhile in business we can see a ruthlessness in his company's attack on his competitors, Lyons. Research has found a High Court libel action during WW1 relating to Lipton's company asserting that the Lyon's directors were German and that buying Lyons' products was akin to assisting the enemy. The court injunction prevented his company from continuing with this declaration. 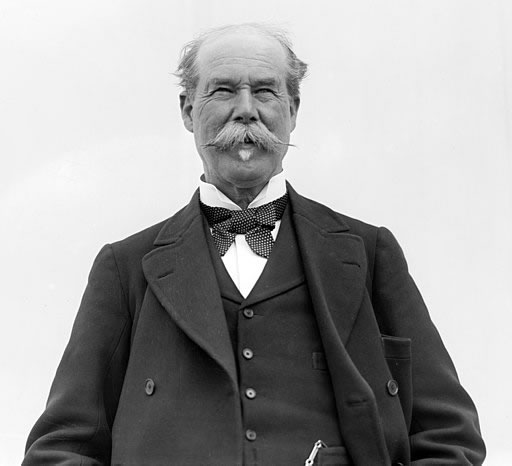 If we now use TheGenealogist to search in the new records for Sir Thomas Lipton's home we select Landowner records. From here we choose the 1910 Lloyd George Domesday. The results return links to images of both the field books, which can reveal some very interesting details of the properties, and also to the valuation maps with pins that precisely locate the house in question. Thomas Lipton is identified in these records as at Osidge, Southgate in the Parish of Barnet. T J Lipton is the occupier while the owner is listed as Percival Bosanquet. By clicking through to the image of the field book, however, we can see that the property is co-owned by Percival along with his elder brother the Rev. G Bosanquet, plus David Agustus Bevan and Roland Yorke Bevan which points to it being a family bequest. The Bosanquets and Bevans can be found in the Peerage, Gentry and Royalty records on TheGenealogist and we see that the Bosanquets were related to the Bevans via their mother Louisa Priscilla Bosanquet, neé Bevan. She was the elder sister of Robert Cooper Lee Bevan and Richard Lee Bevan, the respective fathers of the cousins, David and Roland Bevan.

The four pages of the relevant field book reveals an ample description of the property down to the Billiards room, the library, bakehouse and the servants hall. There is also a five bedroom cottage, a stable, greenhouses and an icehouse that was not used anymore and can be identified on the map some way to the side of the house. 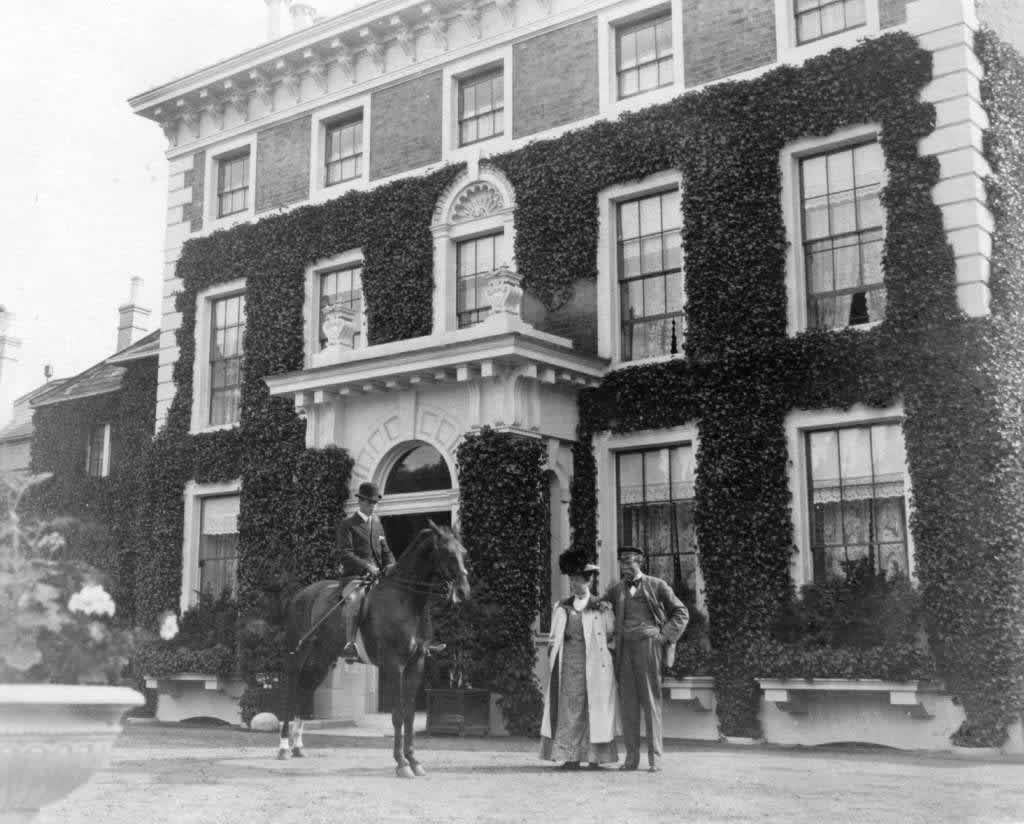 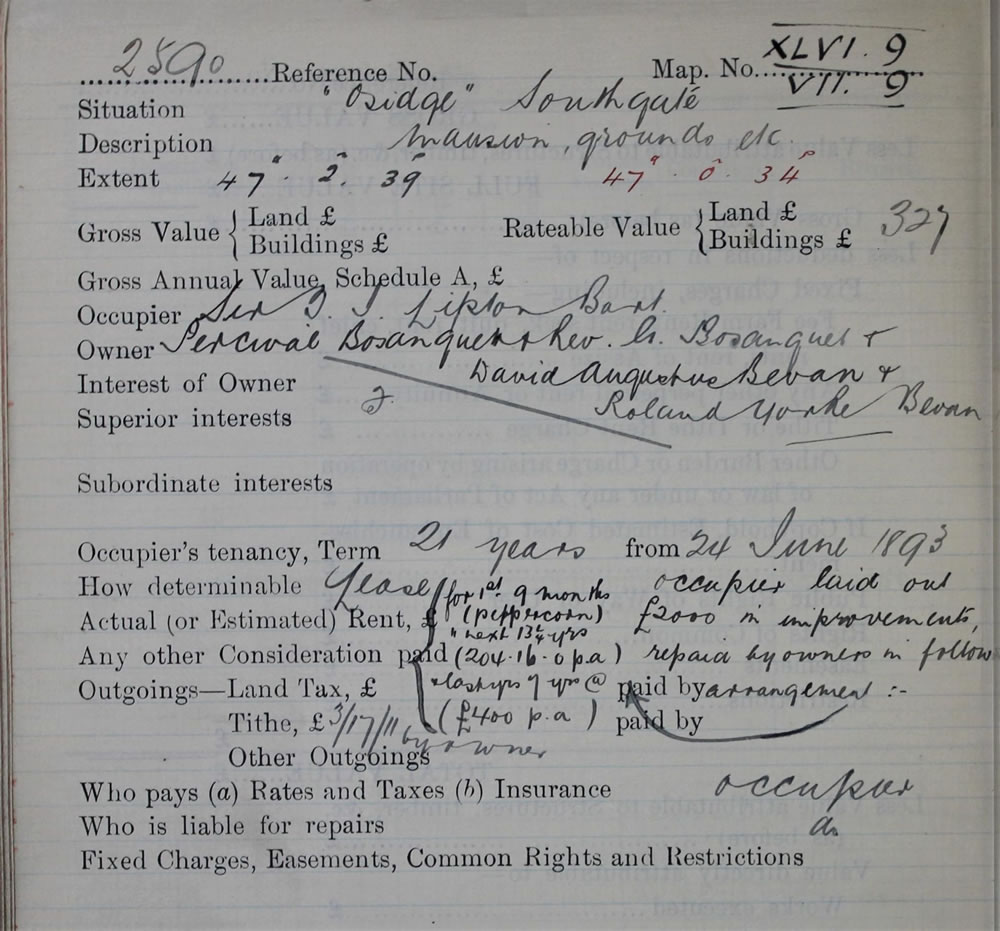 Field book revealing owners and the occupier of the property

Examining the map we can zoom in and out and note the contrast between Lipton's house and the properties on the other side of the street. But even these are palatial in comparison to the tightly packed terraced houses shown on Chelmsford Road. 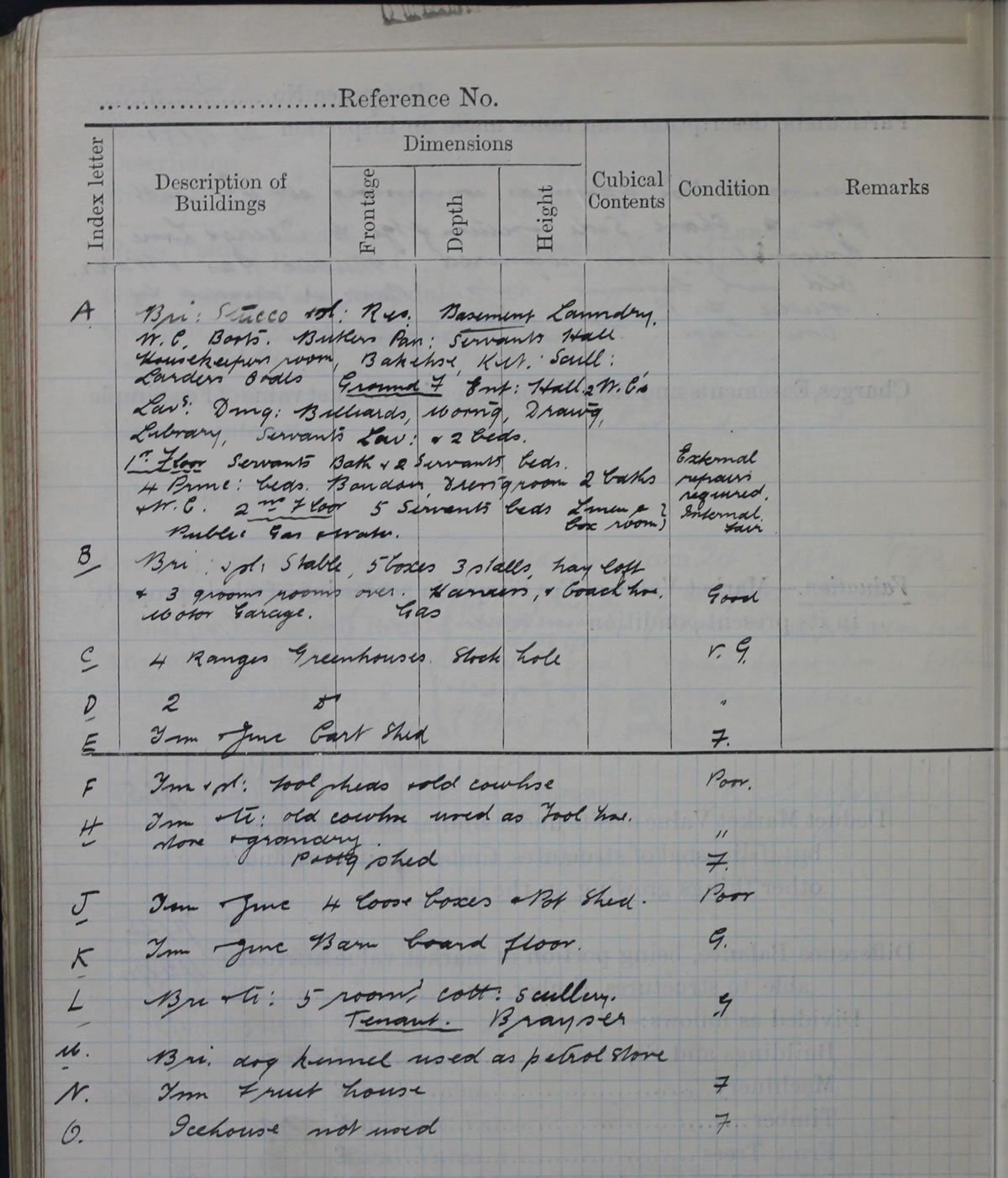 Field book revealing details of the property and its conditions

These fascinating Lloyd George Domesday records can be of great help to identify more about the area in which our ancestors lived and which may have changed significantly since their time. In some places streets may have disappeared completely from our modern maps, or new routes may have been cut through the urbanscape. London is a city where all sorts of change has taken place over the years whether from the German bombing in the Blitz, or property development in the years since the survey. To be able to find where our forebears lived in the 1910 decade this major new resource will be of value to the family history researcher. 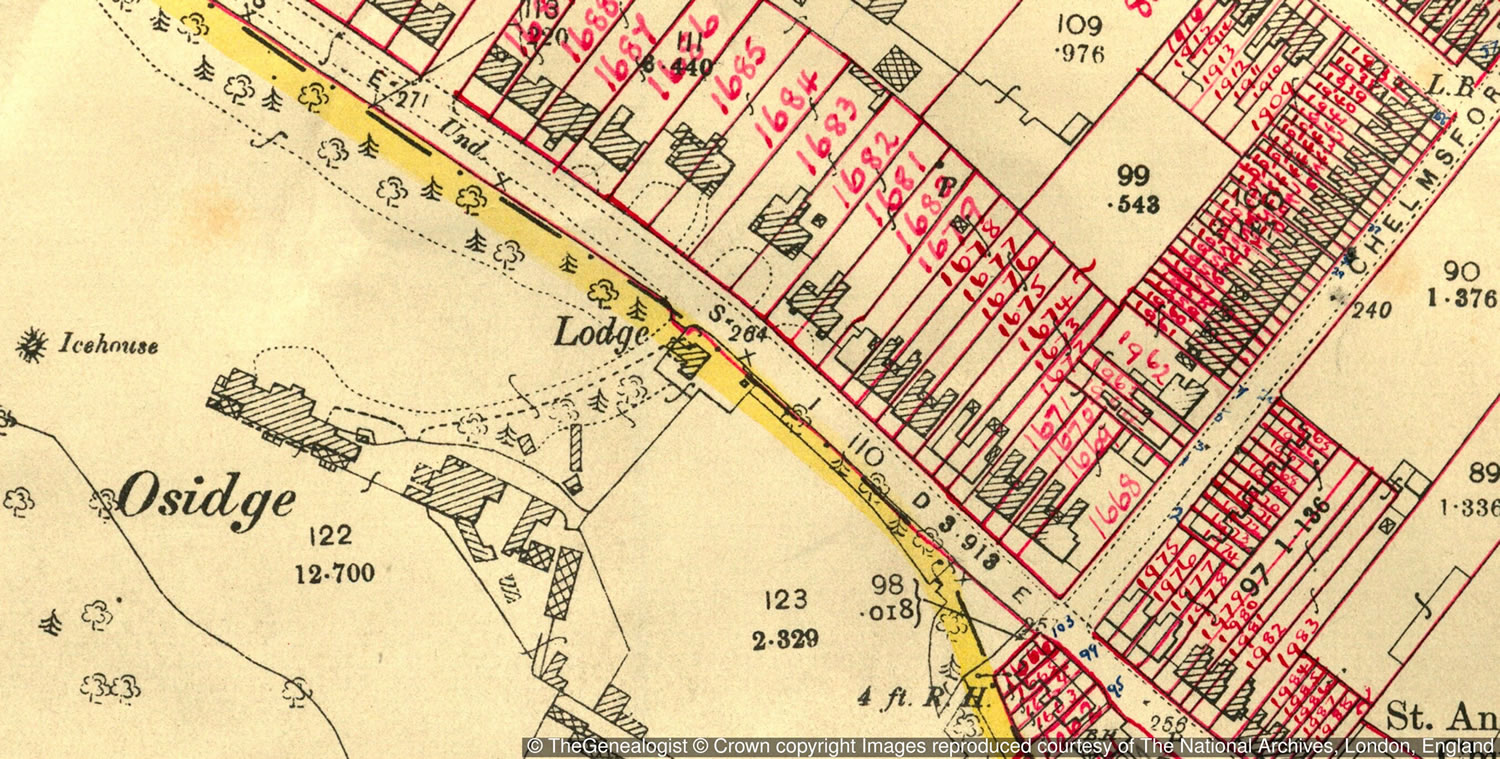