Exploring the Island at Twickenham

One of the best ways to get a feel for where an ancestor lived is to use old maps to see how their city, town or village looked or the land around them was used in their time. The problem comes when the area has changed and relating it to the modern topography becomes impossible.

Now TheGenealogist has added yet more functionality to their Map Explorer™ with the inclusion of its collection of digitised colour tithe maps for a large part of the country. This will allow us to explore the area from early Victorian times at the time when the Second Industrial Revolution was in full swing with the Tithe Maps, using the Ordnance Survey Maps from 1892-1900s, and then up to the present day with the modern maps.

This past summer I was in Surrey in order to attend the successful Discover Your Ancestors Family History Show – London taking place nearby. Before heading to the venue I had a chance to explore the surrounding area and as it was hot that summer day, a walk down by the River Thames on the bank opposite Twickenham was top of my list. As I strolled along the path, through the trees the fascinating Eel Pie Island came into view. This small islet was where once stood the hotel that had been the home of the Eel Pie Island Jazz Club. In recent history this had been the venue where just about everyone who was anyone in the British 1960s rock music field - from The Rolling Stones to Rod Stewart, Eric Clapton to Pete Townshend - played to audiences before their careers took off and they became stars. In the 1950s it had been jazz music that had attracted the audiences with the likes of George Melly, Kenny Ball and Acker Bilk. Before that in the 1920s and 1930s the venue had hosted tea dances in its ball room. 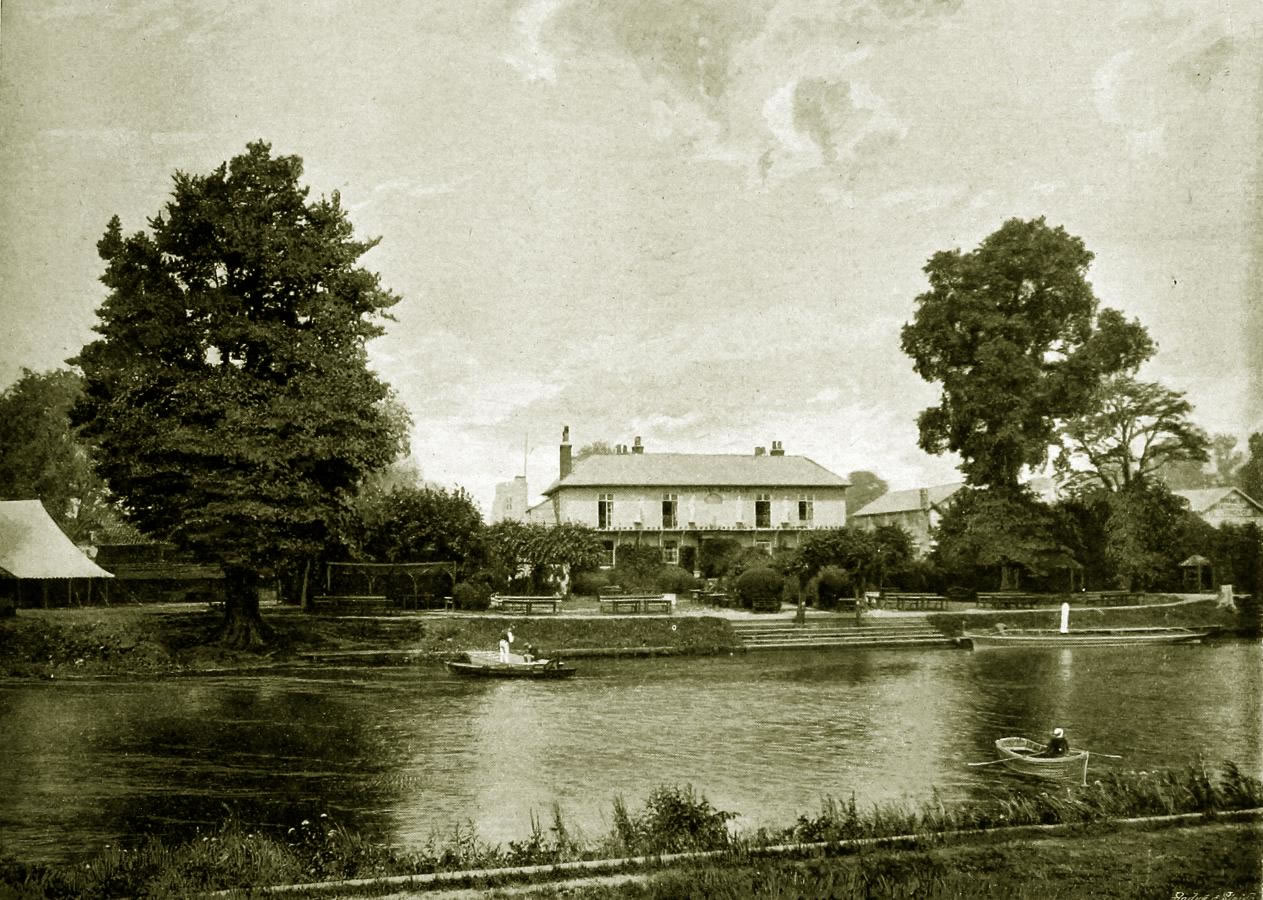 The renowned Eel Pie Hotel itself can be traced back to the 19th century in its previous incarnation as an Inn, variously called The Ship in the Ait and then The White Cross. Reputedly, Charles Dickens had patronised the inn and he also used the ait's location in his book Nicholas Nickleby (1838-9) when his character the young Miss Morleena Kenwiggs visited Eel Pie Island for a picnic.

In modern times the small islet has been home to various famous residents including the first Dr Who, William Hartnell, and the inventor Trevor Baylis, best known for his wind-up-radio from the early 1990s. I have my own memories from the end of the 1970s of visiting successful friends of my parents who lived on the island and commuted to their office in the West End of London. Their riverside home was one of the white 70s houses in the Aquarius development that sits today on the site of what had been the famous former island hotel. This year, as I peered through the trees from the track on the other bank of the river, memories came back to me of their motor launch moored at the bottom of their garden.

A few days later I found myself visiting Twickenham, on the other side of the river, when I found a parking space on the riverside at the Embankment. Suddenly I had memories of my parents leaving their car there and then having to walk over the pedestrian bridge to visit their friends on the island as it was, and still is, only accessible by foot. Fascinated, I decided to research the history of the island and soon discovered that the bridge was only put in place in 1957 to link the island with Twickenham, as before its construction the tiny island could only be reached by ferry. The island itself had once been called the Twickenham Ait, or Eyot, until it became better known in the 1830s as Eel Pie Island. Its new name was acquired as a tribute to the food that the well-to-do day-trippers on the river boats were able to eat at the hostelry flourishing on its shores. 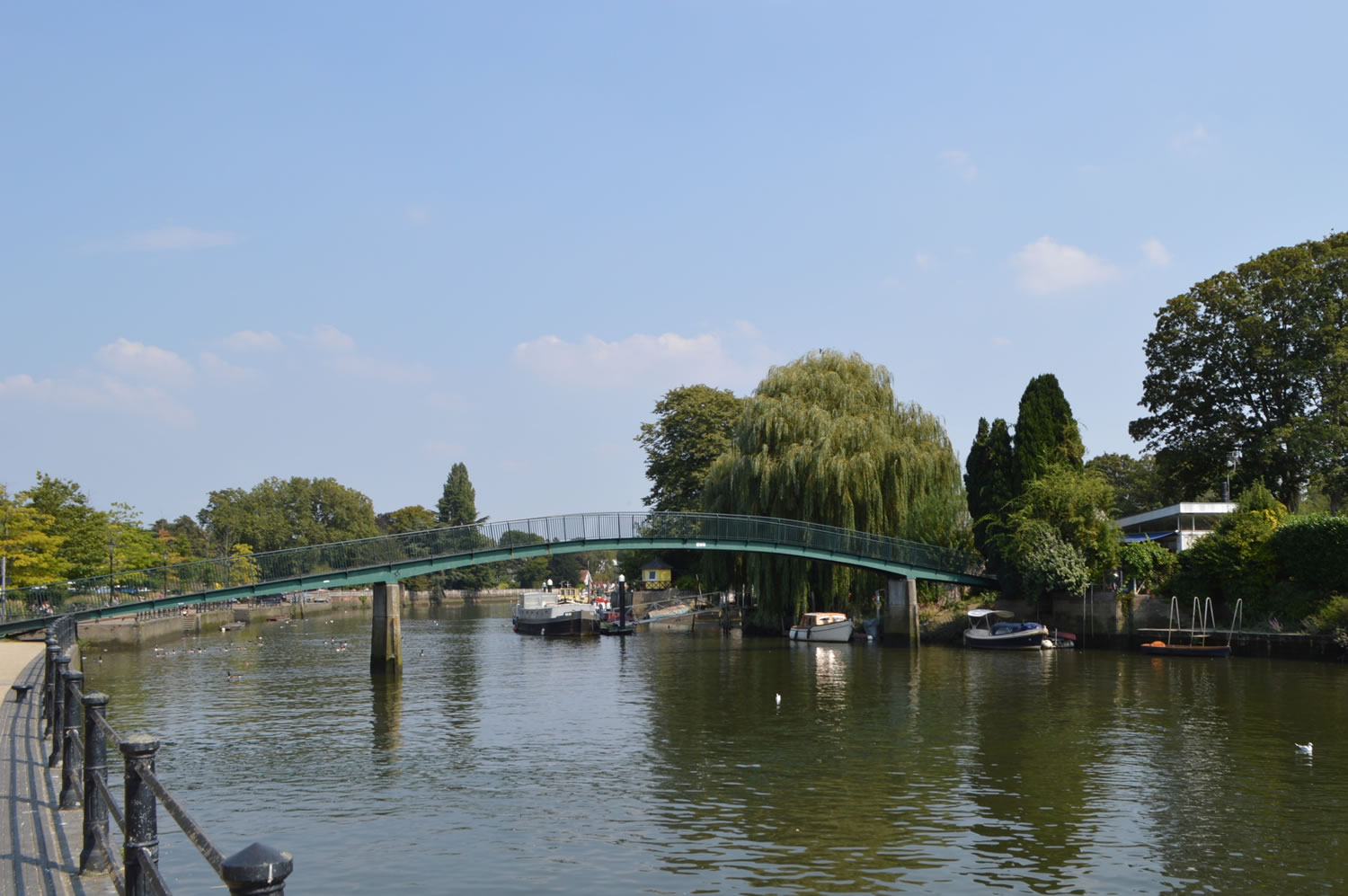 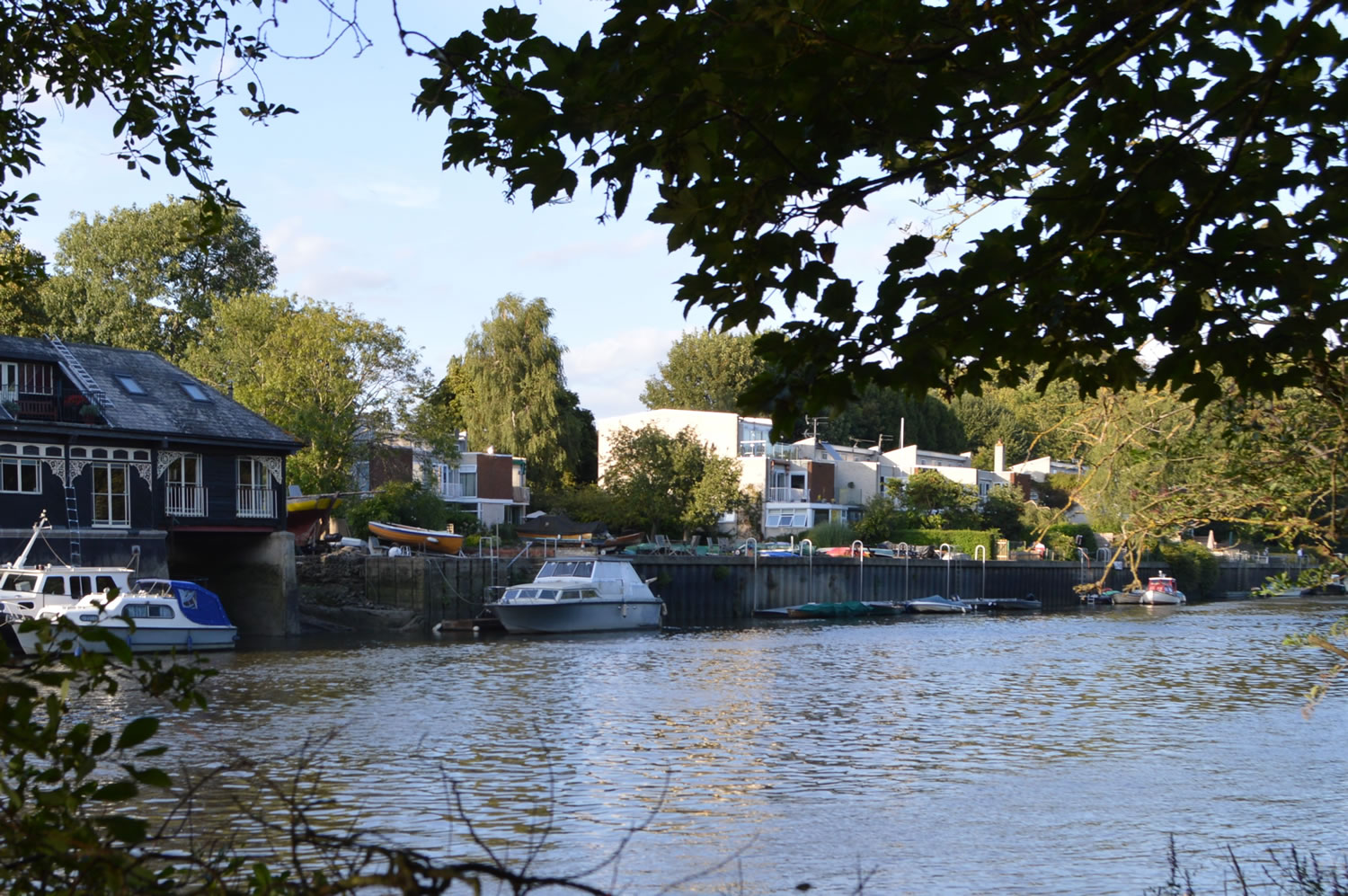 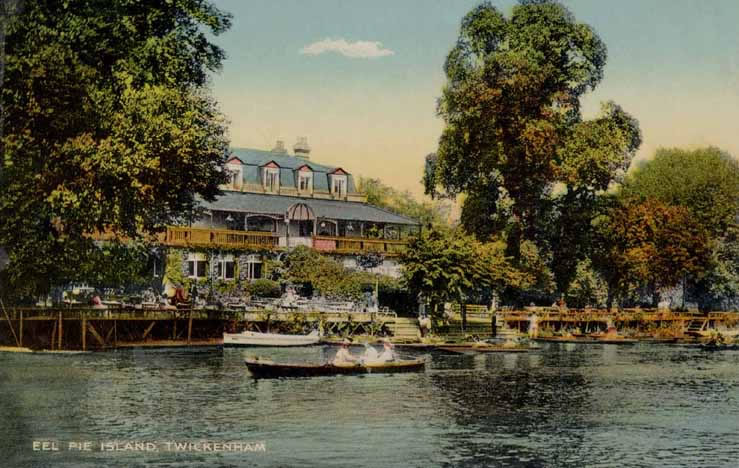 Researching the records with Map Explorer™

The National Tithe Record Collection online was mostly created between 1837 and the 1850s where we are able to find the Twickenham Ait when it was divided into far fewer plots than it is today. From an examination of the apportionment books, that accompany the maps in this collection, we see the date of the survey was 24th May 1845. 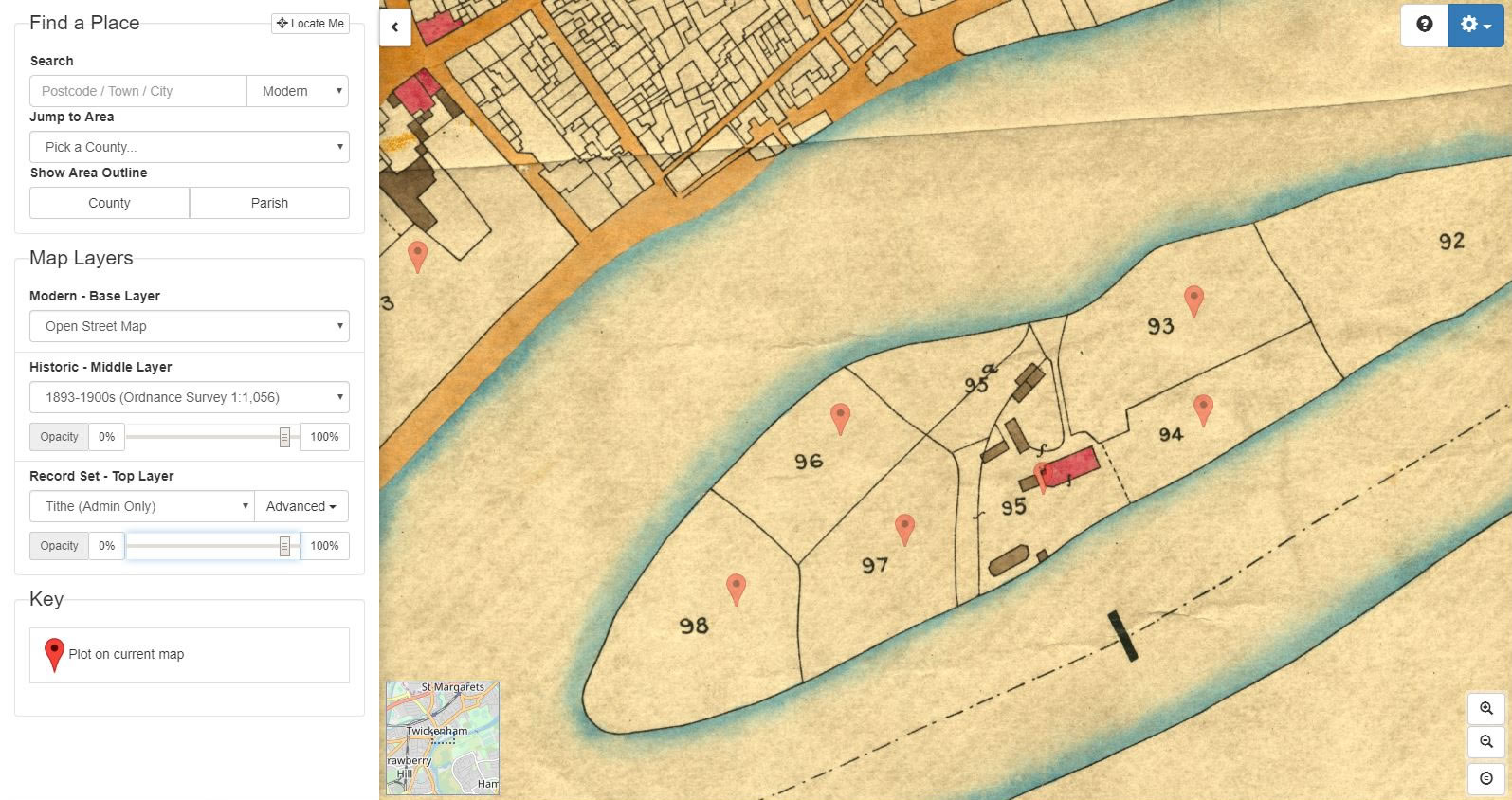 The tavern was marked in red on the Tithe map but the description of the plot pinpointed on the map referred to a house and gardens. The owner at this time in 1845 is listed as Mrs Ann Fielder, while the occupier is James Mayo. From the published history we know that back in 1801 the licensee of the White Cross Inn, when it stood on the Ait, had been Elizabeth Horn (or Horne) and a William Fielder. As Fielder is the surname of the land owner at the time of the Tithe survey it is not much of a jump to think that Ann was related to William by marriage.

The occupier, James Mayo, is documented in various reports of the island's history as being one of the family who had owned the hotel for many years. The Mayos had purchased the business in the 1830s after the old White Cross Inn had been rebuilt as a hotel on the same site and remained owners until the 1880s.

It is thought that Henry Horn had sold the business to Thomas Mayo, who then ran it until 1841 when his son James then took over. Thomas Mayo's death can be found in the 1841 death indexes on TheGenealogist. James died in December 1862 at which time the reins then passed to James's wife Elizabeth. But from a look at the census records on TheGenealogist we can see that Elizabeth had help in the running of the hotel. The 1871 census shows that Charles R Reed is now the head of the household and the Hotel Keeper. From a glance at the census record it appears that he had married the Mayo's daughter Eliza N. What is noticeable, however, is that Eliza's 68 year old mother, Elizabeth, also retains the same occupational title as her son-in-law, making it appear that she has not passed over all control. 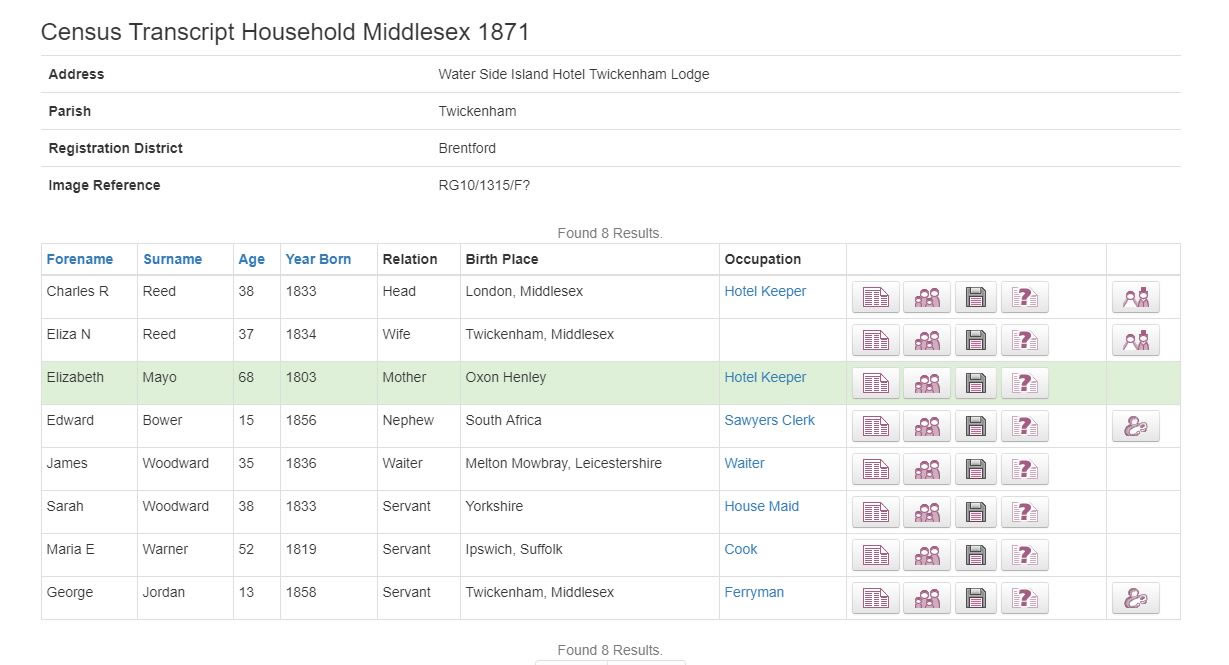 Ten years earlier in the 1861 census, and when James was still alive, the Mayo's daughter Eliza N was as yet unmarried. To discover more I then did a search of the marriage indexes on TheGenealogist which returned the record of the marriage in the last quarter of 1870 in the Kingston district. Their full names are given as Elizabeth Newman Mayo and Charles Robert Reed.

James Mayo and family in the 1861 census of Twickenham

The 1861 census does not give the name of the hotel, referring to it as "Twickenham Ait". However, a list of publicans that appear in the 1861 Post Office Trades Directories for Middlesex, digitised on TheGenealogist, shows us that the island's hostelry was referred to as Eel Pie House. In the next year, sadly James would be dead and Elizabeth his wife would have to take over the business until her son-in-law joined the family in 1870. 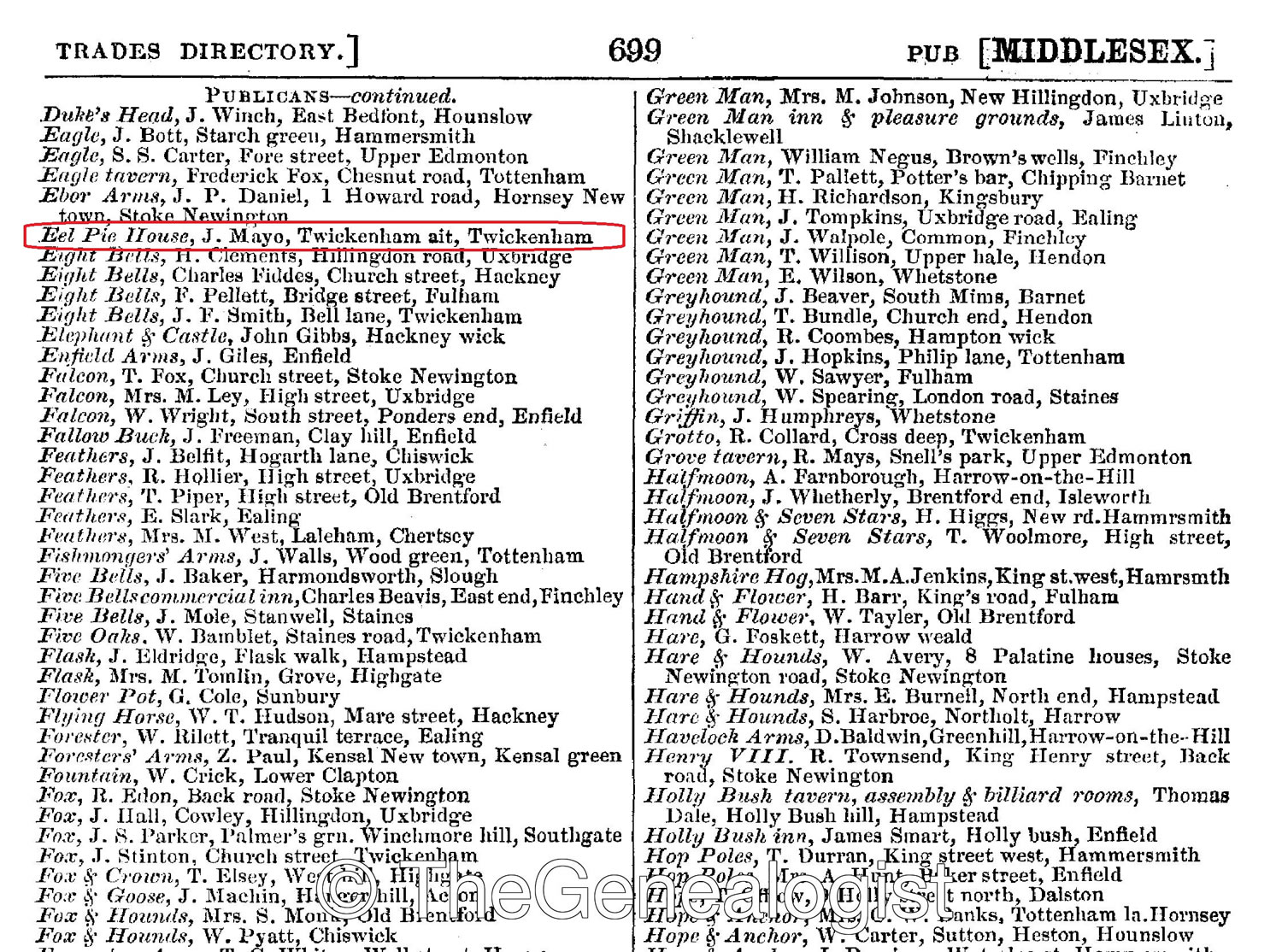 Having found that in 1871 Charles Reed and Elizabeth Mayo were both recorded as Hotel Keepers it is interesting that going forward to the 1881 census another change has happened. By this time Elizabeth and Eliza are now living together at Stoneley Cottage in Twickenham and they are both widows! A search of the death records on TheGenealogist for Charles finds his death in the last quarter of 1875. It is not in the Twickenham area but is registered in the City of London. This means Eliza and Charles only had five years of marriage and interestingly 1875 had also been the year in which he had taken on the licence for the Queen Victoria Hotel in Queen Victoria Street, London. It turns out that this public house in the City was also the place of his untimely death.

While mother and daughter are now living in the town a new Hotel Keeper, Andrew Anderson and his wife, Elizabeth, are now listed at the Island Hotel.

The owners of the Eel Pie Island Hotel from this period would no doubt be bemused by its fame in the music scene of the 1960s – and perhaps sad that there is no sign of the hotel left at all today, as can be seen by using TheGenealogist's Map Explorer Tool. 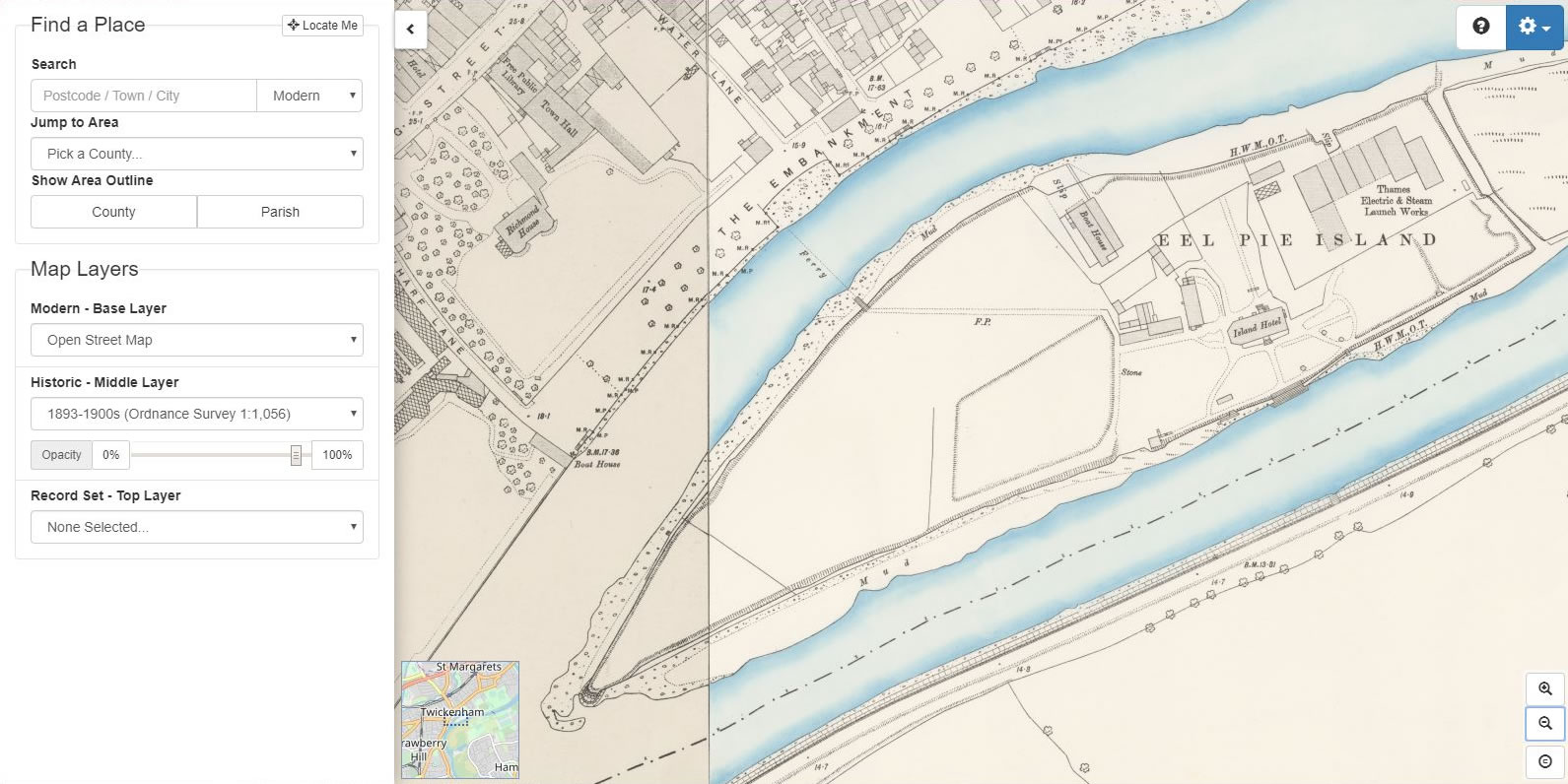 Using the Map Explorer™ and its powerful georeferenced maps allows us to travel through various time periods. If we fade out the tithe map and then allow the Ordnance Survey map from 1893-1900s to appear this now shows us the island in the late Victorian era. What we can immediately see is that to the north east of the Island Hotel some industry has now arrived on its shores in the shape of the Thames Electric & Steam Launch Works. The history of boat building on Eel Pie Island is recorded to go back to 1891, when Mr William Sargeant established this business here. Also joining the scattering of buildings on this map is a Boat House and by now fading this historical map out to allow the base map of a modern Open Street map to display we can see that today it is the home of the Twickenham Rowing Club. This club is jointly with the Thames Rowing Club the third oldest rowing club on the Thames having been founded on 26 July 1860, though originally its boathouse was a floating structure. In the 1880s the boathouse was put ashore when the club obtained the site that we see on the maps.

Eel Pie Island indeed has a fascinating history. While many will know of it from its twentieth century connection to 60s rock music, it turns out that even before the Island Hotel had stood on its bank, taverns called The Ship in the Ait and then The White Cross had drawn numerous visitors to its shores. While it no longer has a hostilery of any sort, this part of Twickenham is the home of several artists who open their studios to the public twice a year. Other than this, Twickenham Rowing Club and the boatyards, there is little to draw the casual visitor to cross the bridge. There are two nature reserves at each end of the island but without public access and with private houses now occupying most of the islet, views of the river are nonexistent from the path. This seems very different from when the historical maps on TheGenealogist were drawn up and Dickens had his character Morleena Kenwiggs visiting Eel Pie Island for her picnic.

It is intriguing to look at a place and compare its modern day features with its historical past. The Map Explorer™ provides a great way of getting your ancestor's perspective on their environment and, along with the various other records on TheGenealogist, can add engaging depth to your research.