While many of our ancestors may not have had the educational opportunities that are the norm today, with higher education available to a wider cross section, sometimes we can come across an ancestor in our research who was privileged enough to go to a Public School or to have attended university. In cases such as this then we can immediately turn to a set of records on TheGenealogist that can add a bit of depth to a family story. They can also reveal leads that will point you in new directions for your research.

TheGenealogist has recently added to its collection of major schools, colleges and university records with a new tranche of register books. This useful collection in its Education Records is taken from school and university registers with dates ranging from 1220 to 1949. I was excited to immediately find one of my own great-grandfathers listed in this new release in Cheltenham. 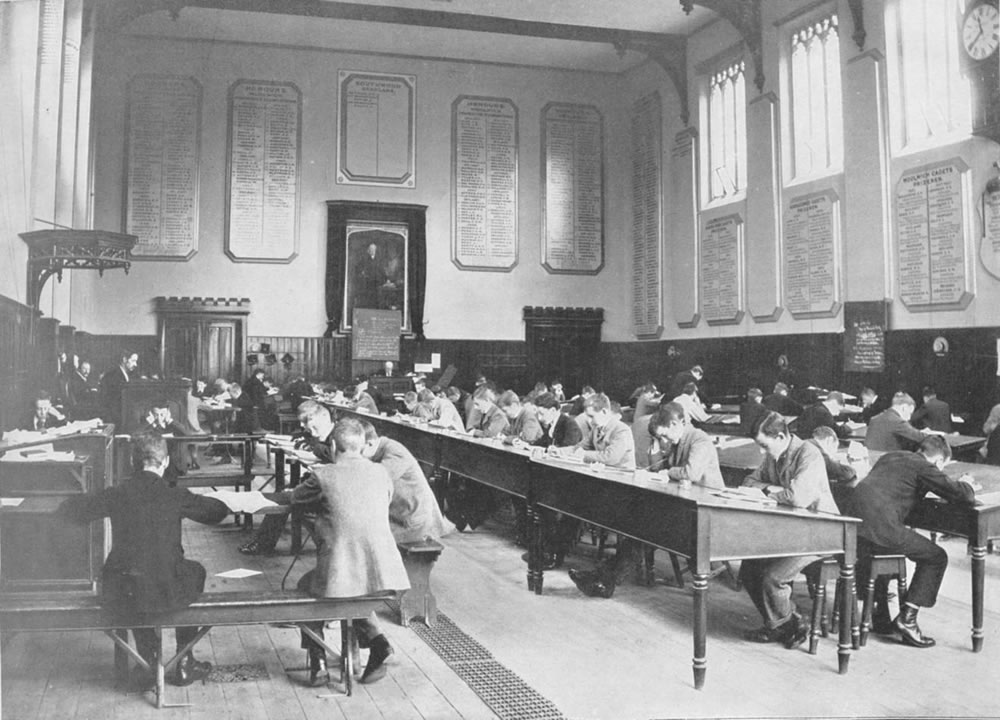 Cheltenham College from the Image Archive on TheGenealogist

While the 1851 and 1861 censuses tell me that my paternal great-great-grandfather would have been toiling hard as a lowly ropemaker in that decade, these new records confirm that the other branch of my family tree were much better off. In this period my maternal great-great-grandfather earned his income as a "proprietor of houses". Meanwhile his son was striving at his studies in Cheltenham College, as in the picture above, rather than braiding ropes together for the Royal Navy's use.

My great-grandfather Edward Adolphe Massey Hay, these records tell me, entered Cheltenham College in August 1857. He is recorded as the son of Charles Crosland Hay, my 2x great-grandfather, and this gentleman also appears in pages at the front of the register where he is listed as one of the Directors of the school from 1852 until his death in 1858. While the death of Charles Hay is reported after his entry, my research shows that Edward's mother had died in 1851. From this it appears that Edward would be orphaned, aged 13, while at this school. Information that the school register on TheGenealogist gives me includes the date of birth of Edward as 24th February 1845 - it lists him as a Day Boy and not a Boarder whilst also revealing that Edward left the school in June 1860 aged 15.

From the entry in the records on TheGenealogist I am offered further lines of enquiries that I could go on to research. It details that he became a Lieutenant in the 17th Regiment, retired as a Tea Planter in Ceylon and then died in Kandy in January 1909. Using this information I found that the 17th Regiment of foot was the Leicestershire Regiment and so researching in the military records could be the next move to make. 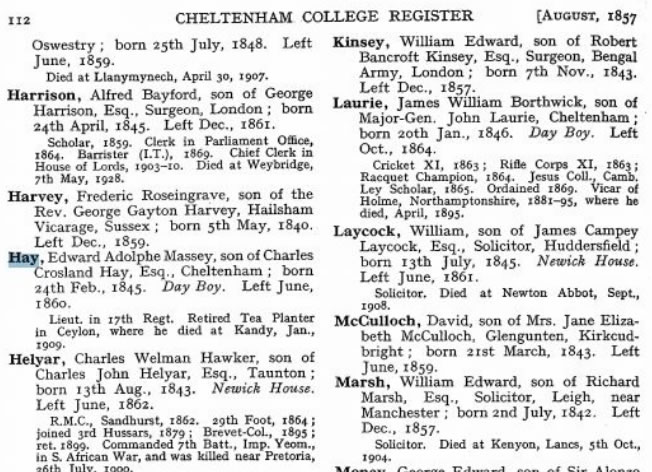 Edward was the youngest of seven children and by then using the information gleaned from earlier census that reveals the names of his brothers, I could look for Charles Jr, John, Robert and William Hay who were all at the school before Edward. The few biographical lines assigned to each entry details interesting lives of the Hay boys. One became a lawyer who went to Oxford University and then became a District Judge in Ceylon; several were army officers, one of whom rose very high in rank; while another sibling left as a Major to then become the Chief Constable of Wolverhampton.

If you have an ancestor that you think may have been to a major school or a university then TheGenealogist has many records to help you discover more about them.