With the release of the Kensington and Chelsea Lloyd George Domesday Survey IR 121 maps and IR 58 field books, we've been looking at the streets of this upmarket part of central London. It is the home of the iconic Department store Harrods but is also where many rich and famous people set up their residences.

The author of the famous novel Dracula, Bram Stoker, lived at 4 Durham Place, Chelsea. This Gothic horror novel introduced the infamous Count Dracula to the bookshelves of the world in 1897. While this is what we today know him for, in his own lifetime he was better recognised as the personal assistant of the most famous actor of his time, Sir Henry Irving. Bram Stoker was also the business manager of London's Lyceum, a theatre which Irving also owned. 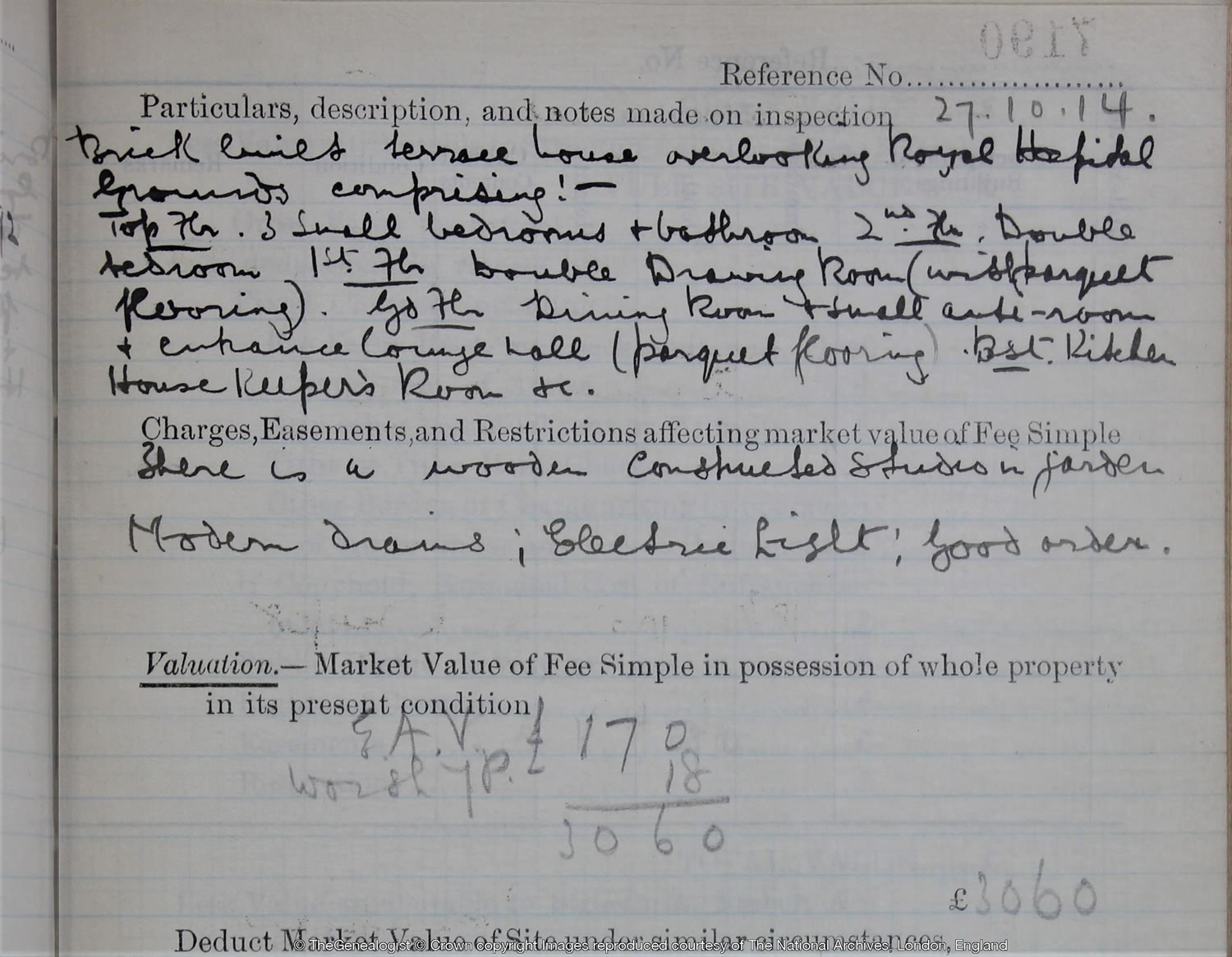 Bram Stoker was an Irish Protestant, born in Clontarf, Dublin on 8th November 1847 to senior civil servant Abraham Stoker and his wife Charlotte Thornley, a writer and charity worker. Stoker married his wife, Florence Balcombe, in 1878 and they moved to London. We can see that by the time of the Lloyd George Domesday Survey the Stokers are living at Durham Place which was just a stone's throw from the Chelsea Pensioners quarters at the Royal Hospital. The IR 58 Field book even tells us that the Stokers had a view of the gardens. The record describes the property as a "brick built terrace house overlooking the Royal Hospital Grounds". There is also mention of the parquet flooring, the wooden constructed studio in the garden, modern drains and the electric light! 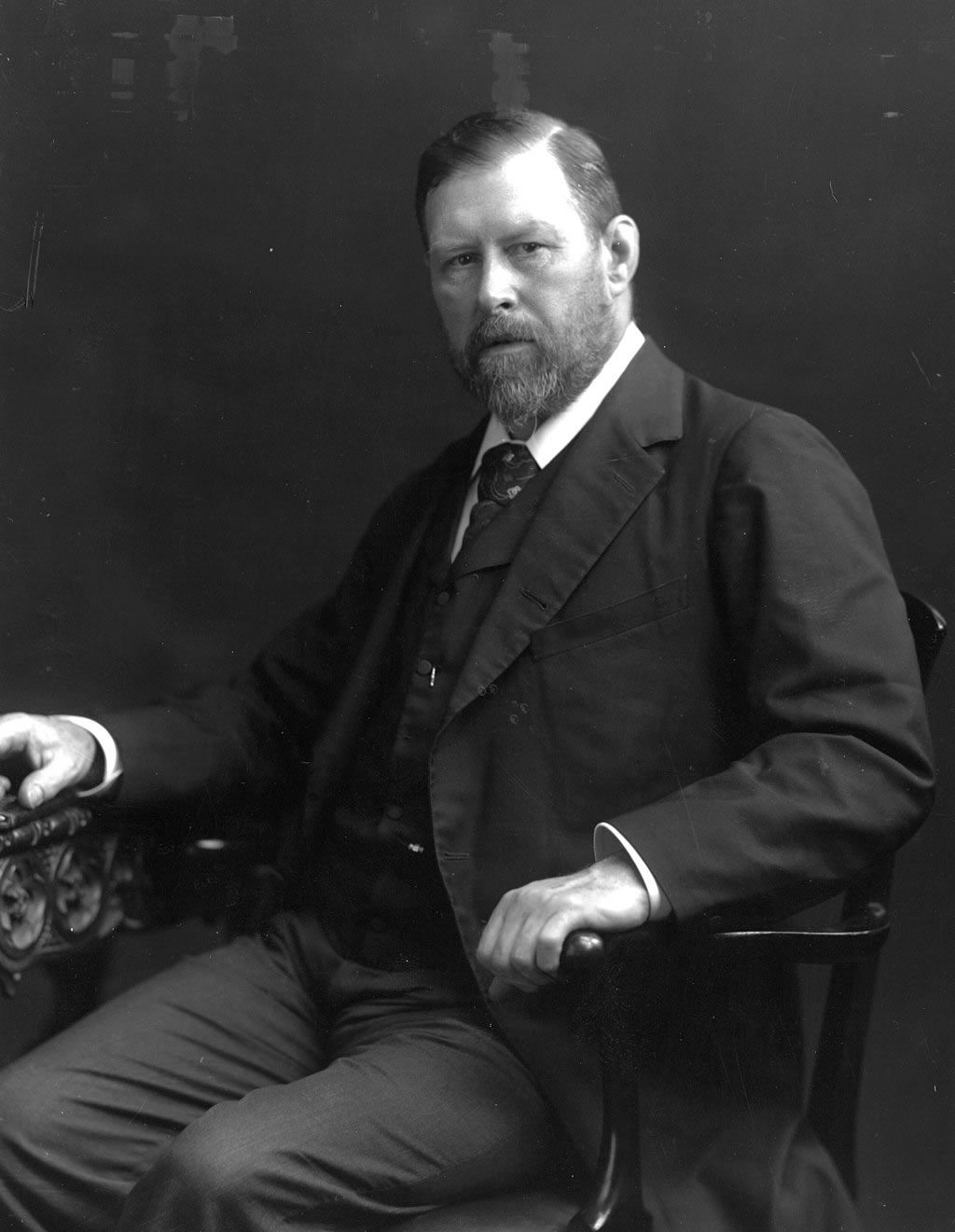 Where the famous grew up

Our next property is the childhood home of one of the greatest British actors of recent times. The field books and maps for Kensington and Chelsea reveal where a very young Laurence Olivier was living at this time. From the 1911 census we find that he is the three-year-old son of the Reverend Gerard Kerr Olivier and Agnes Olivier. Their home in the Notting Hill area was at 80 Elgin Crescent and the Lloyd George Domesday records identify details of the house and pinpoint the road on a map from the time. 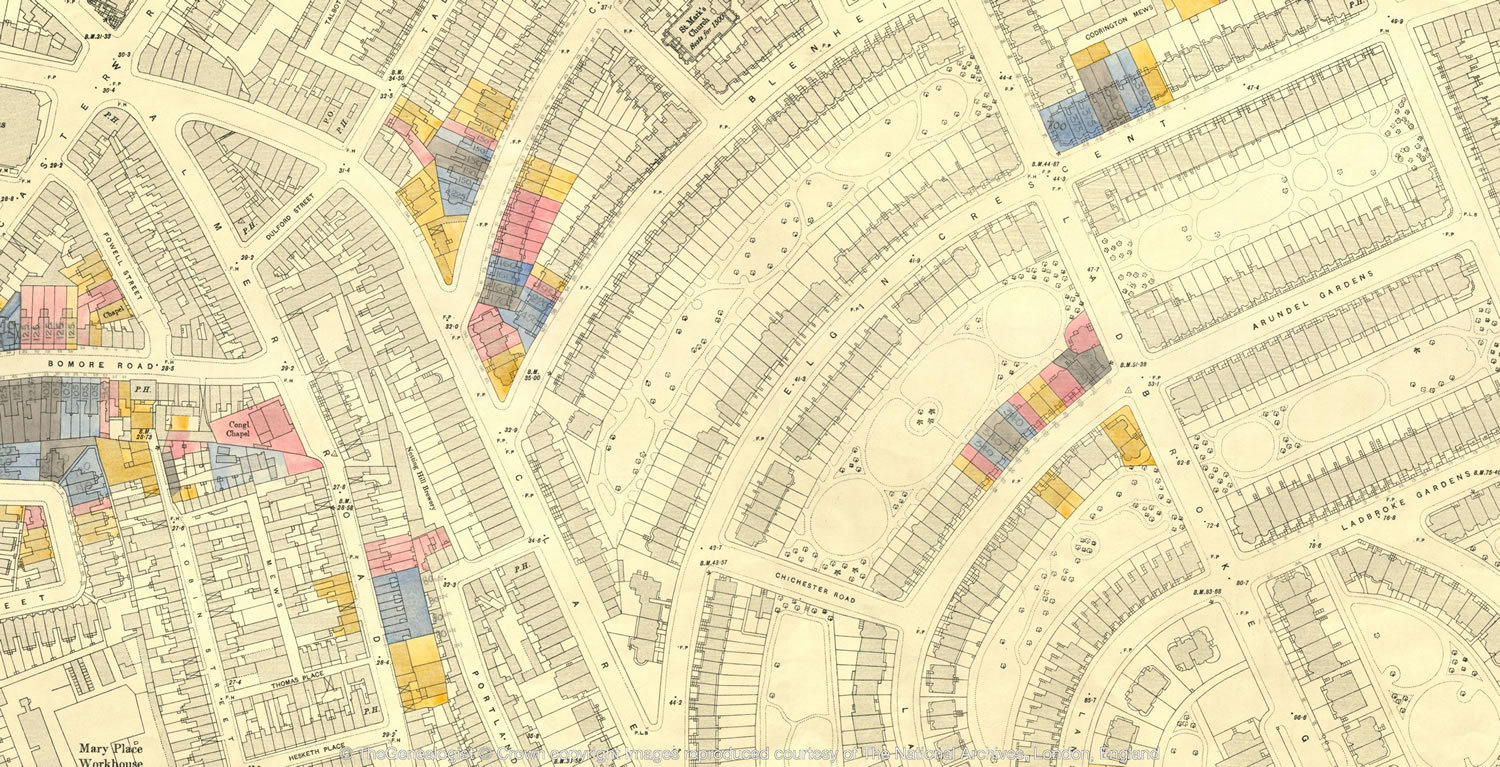 Laurence Olivier was an English actor and director who in the mid-20th century was one of the theatrical greats of this country. Lord Olivier, as he would become, gained many awards and accolades for his acting and also his part in pioneering Britain's National Theatre. From roles on the stage to working in films throughout his career, he also had considerable success in television roles later in his professional life. His childhood home, as we can see from these records, was not that far away from the West End and London's famous Theatreland. 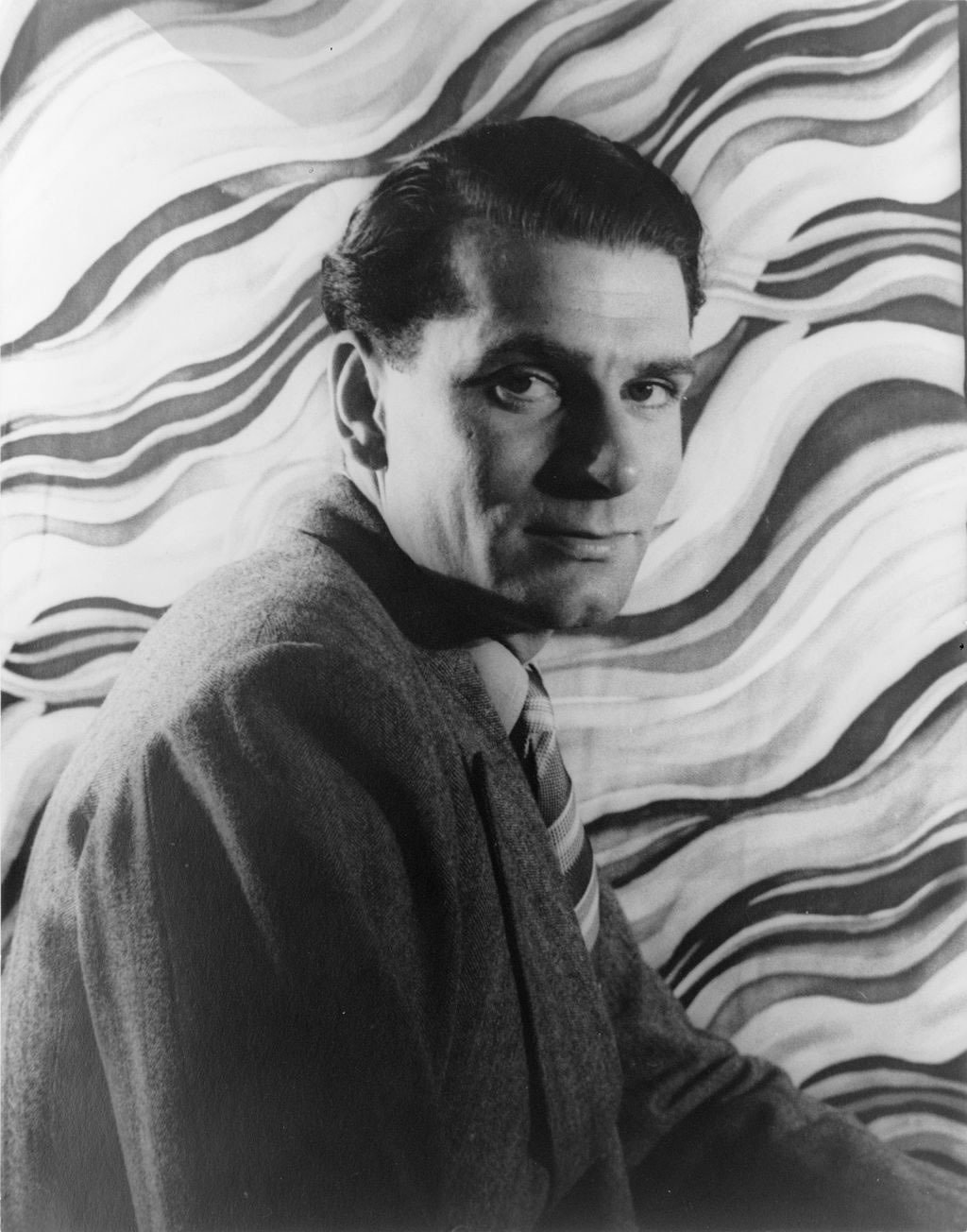 The Potters of Bolton Gardens

In another street, this time in the Brompton district of Kensington, we can find Rupert William Potter. He was a barrister in London practising law, specialising in equity law and conveyancing - but it is his daughter, Helen Beatrix Potter, the famous author and creator of the Tale of Peter Rabbit that will be better recognised by readers. 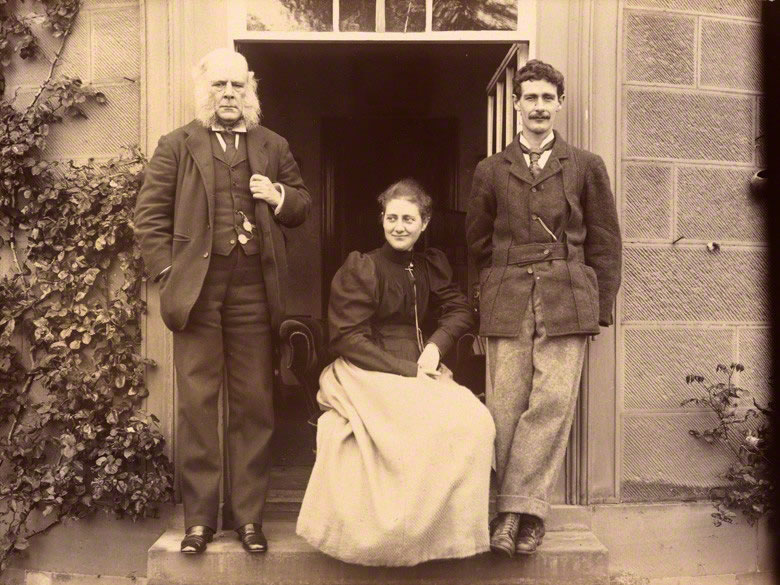 Beatrix's parents lived in some style at 2 Bolton Gardens where Beatrix had been born on 28 July 1866 and her brother Walter Bertram on 14 March 1872. Beatrix actually lived in this house until her marriage in 1913 and so at the time of the survey this would have been her home. The house itself was destroyed in the Blitz and so is no longer there, in its place is Bousfield Primary School which displays a blue plaque on the wall of the building denoting its connection to Beatrix. 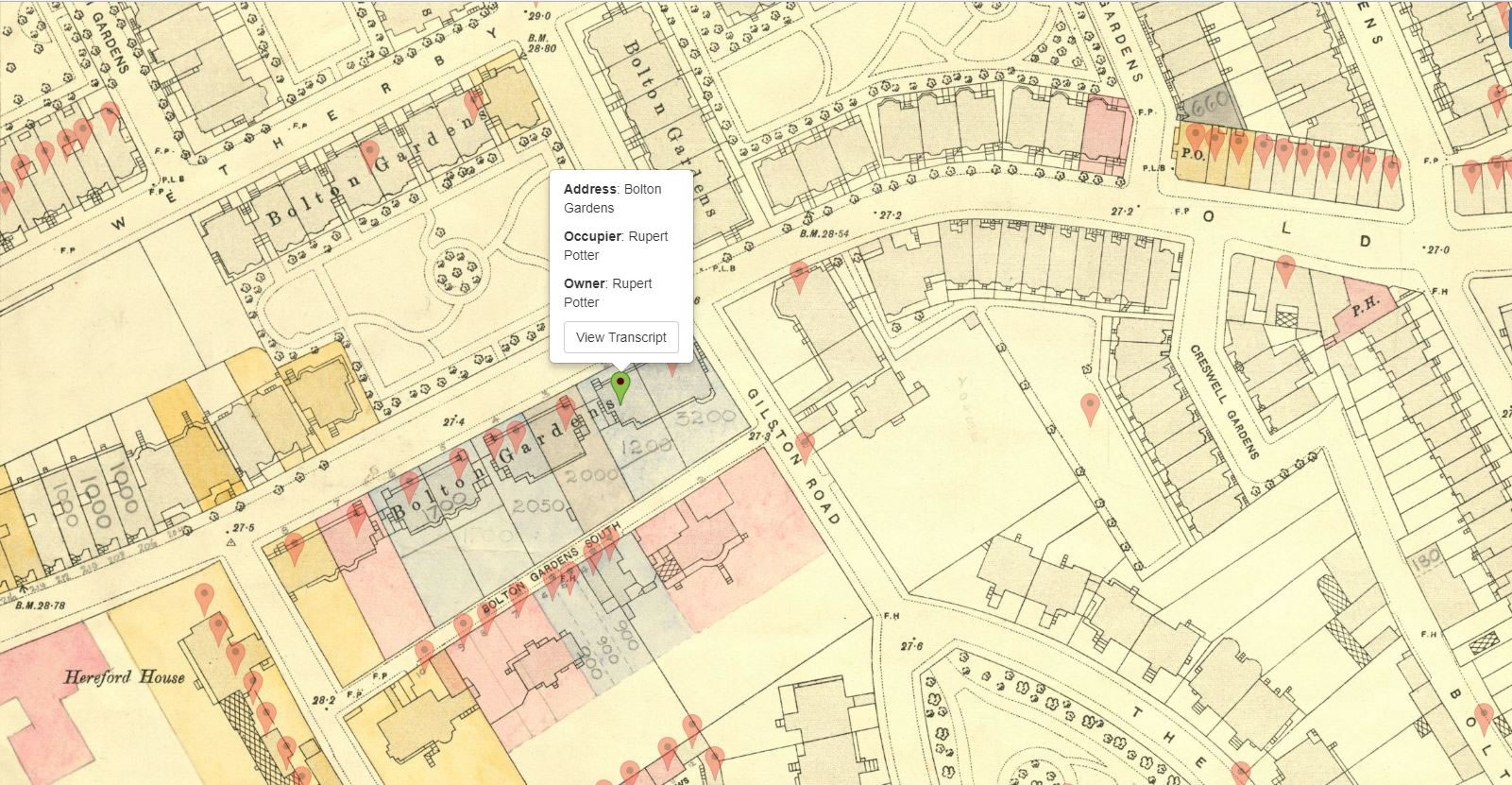 These interesting property owner and occupier records are a great resource for family history researchers searching for their ancestors in the Edwardian period. The Lloyd George Domesday records can help give context to the lives of our forebears and to the areas in which they once had their homes. Many locations have changed significantly over time with places disappearing completely from current maps, or new routes having been cut through the urbanscape. In London and its suburbs, all sorts of change has taken place over the years whether from the German bombing in the Blitz, or property development over time. To be able to find exactly where our forebears lived in the 1910s, this major resource will be of huge value to the family history researcher.

To find out more about this unique record set, visit https://www.thegenealogist.co.uk/lloyd-george-domesday/