TheGenealogist has added the maps and field books from the Lloyd George Domesday Survey of Islington to its powerful Map Explorer. This fantastic tool allows researchers to view a number of historic maps overlaid over modern street and satellite plans in order to find the exact locations of ancestors' homes. This resource is especially useful when the property no longer exists, the road numbering has changed, or has been wiped off the modern map completely.

In Edwardian times many music halls and theatres had set up in the area around Islington Green and one of these entertainment establishments was called the Collins' Music Hall. A walk down the street today finds the old frontage incorporated into a branch of a national bookshop chain with its black doors and window surrounds. Behind it is a modern block of flats and a new underground theatre, with its entrance at the bottom of Essex Road.

The original Collins' Music Hall was opened in 1863 by an entertainer named Sam Collins. It was situated at the rear of The Landsdowne Arms public house and seated up to 1,000 people. Unfortunately, Collins died two years after the launch of his enterprise and so in 1897 a syndicate redesigned the venue, as can be seen by a 'Rebuilt 1897' plaque up high on the current building. Another smaller plaque tells passers by that the music hall existed there from 1862 to 1958. It was in 1958 that the theatre was gutted in a fire that destroyed most of the venue, but the front and side walls survived. 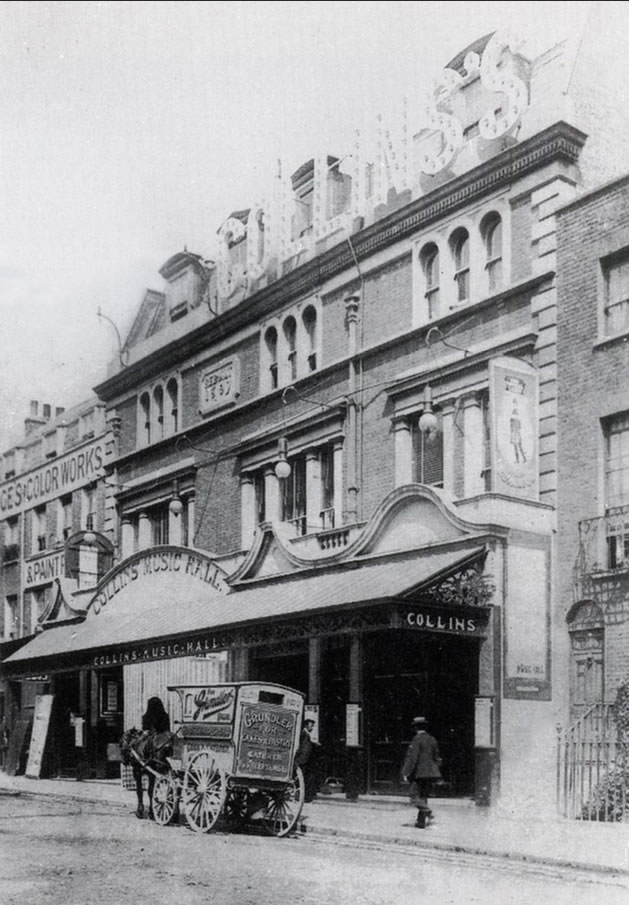 In the 1960s Tommy Trinder, who had once been a boy soprano at Collins', would act as the auctioneer of photographs from the walls of the venue in aid of the British Music Hall Society. At this event one particular photo caught the eye of the insurance underwriter Ray Mackenderone, who was also one of the founders of the society. This particular picture was a signed photograph of a not very successful music hall artiste known as Belle Elmore. She was famous, however, not for her stage appearances but as the unfortunate murder victim of Dr Crippen - his wife Cora. 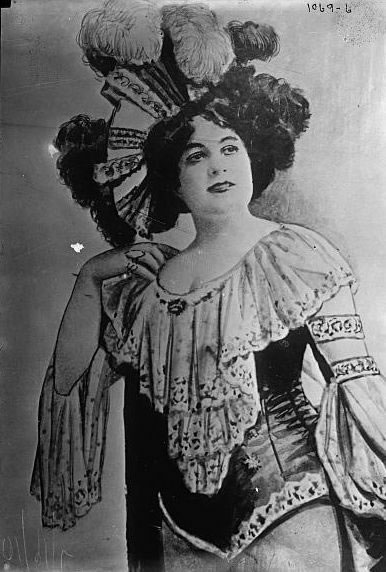 Finding the property in 1910

The Valuation Office survey, often referred to as the Lloyd George Domesday Survey, has recorded this theatre building as the Collins Music Hall & Landsdowne Arms Public House. On the large scale historical map we can see the extent of its footprint. The satellite map then shows us that part of this area has been taken up by the building of the modern development of flats. 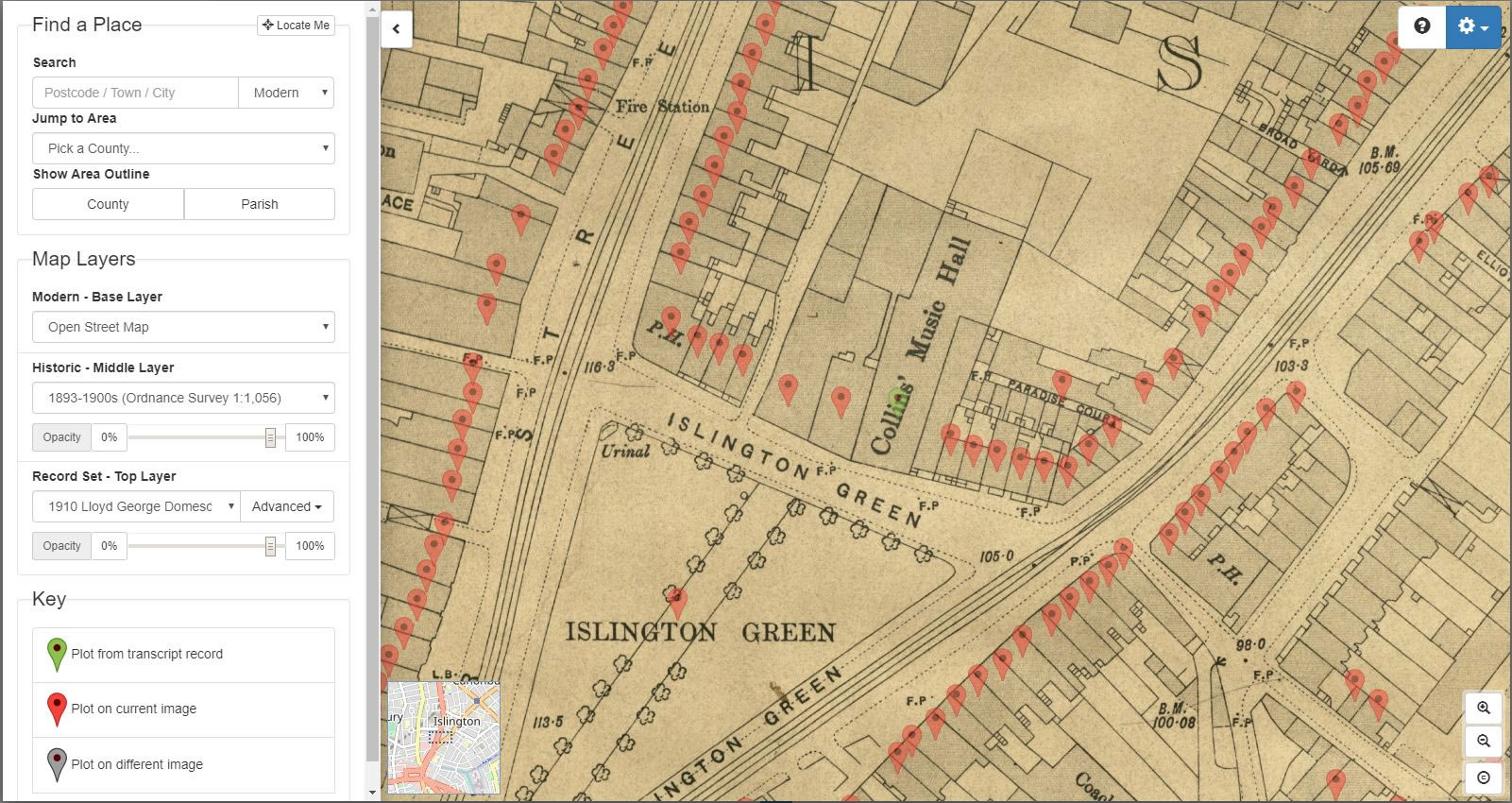 The Crippens were Americans, Hawley Harvey Crippen was born in Michigan and qualified as a homoeopath doctor while Corrine "Cora" Turner, had been born Kunigunde Mackamotski to a German mother and a Polish-Russian father. In 1894 Crippen started working for Dr Munyon's, a homoeopathic pharmaceutical company in the USA, but moved with second wife Cora to England in 1897. Two years later and Crippen was sacked by Munyon's for allegedly spending too much time managing his wife's stage career. Needing another job, he became the manager of an Institution for the Deaf and it was here that in 1900 he hired a typist who went by the name of Ethel Le Neve, though she had been born as Ethel Clara Neave.

After moving around various addresses in London, in 1905 the Crippens moved into 39 Hilldrop Crescent, Upper Holloway West, London which was situated a couple of miles north of Islington Green and Collins' Music Hall. They were not making much money between them and so they took in lodgers to augment their income. Cora had previously taken several lovers and then embarked on an affair with one of these lodgers. In turn, Crippen took Le Neve as his mistress.

Cora then mysteriously disappeared in February 1910. Crippen maintained for some time that his wife had simply run away back to America with one of her paramours. Then he began claiming that she had died in the States, though Cora's friends were unconvinced and so the police were called in. The Metropolitan Police paid a visit to 39 Hilldrop Crescent to question Dr Crippen in July 1910 and this caused Crippen to up sticks and skip the country with his lover, Ethel Le Neve, who disguised herself as a boy. The police began digging up the floor and cellar of the house and soon found body parts.

Crippen and Le Neve were by now onboard the SS Montrose and the new technology of wireless telegraphy was used when the Captain thought he recognised Crippen as the escaped fugitive and informed the authorities before his radio transmitter was beyond range. Chief Inspector Dew from Scotland Yard then boarded a fast ship that caught up with Crippen's ship in Canadian waters. Dew came aboard the Montrose as it was entering Canadian waters bound for Quebec and was then able to make the arrest of the doctor and his lover.

Dr Crippen and Ethel Le Neve were brought back to England, where Crippen was tried and convicted and Le Neve was acquitted. There have been several claims since that it was not Cora's body, but that of a man. At the time of the trial, pathologists had testified that they were unable to identify the torso remains, or even discern whether they were male or female. One of their number, the eminent Bernard Spilsbury, told the court that he had found a piece of skin with what he claimed to be an abdominal scar consistent with Cora Crippen's medical history. The court convicted Crippen and, receiving the death penalty, he was hanged at Pentonville Prison, London on Wednesday 23 November 1910 while Ethel Le Neve was exonerated of the charge of complicity to murder. After the trial, Le Neve travelled to Canada where she worked as a typist for three years before returning to London under another name and marrying. 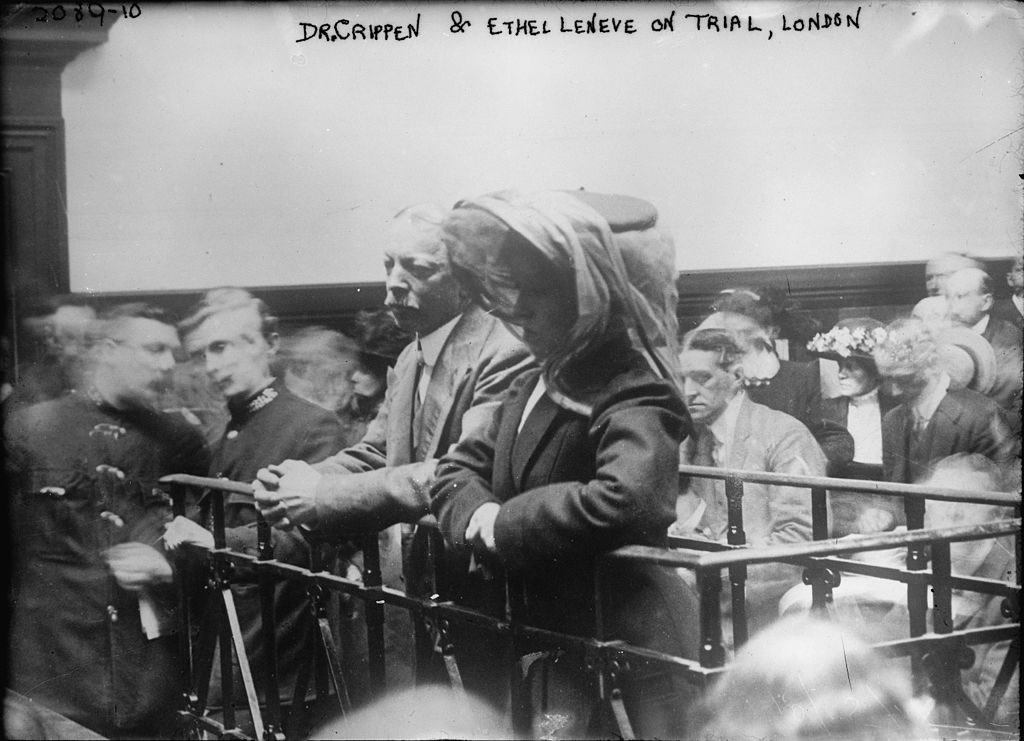 Where was the house?

Using the new IR 58 records on TheGenealogist identifies that 39 Hilldrop Crescent is on the south western side of the crescent. Today the crescent is a mixture of a few old houses and a lot of post Second World War housing development. It would seem that the crescent was bombed in the Blitz. By using the opacity slider to fade out the record set layer, as well as the historical map, and then display a modern satellite map we note that Crippen's house is one of those that was demolished to make way for a block of flats. 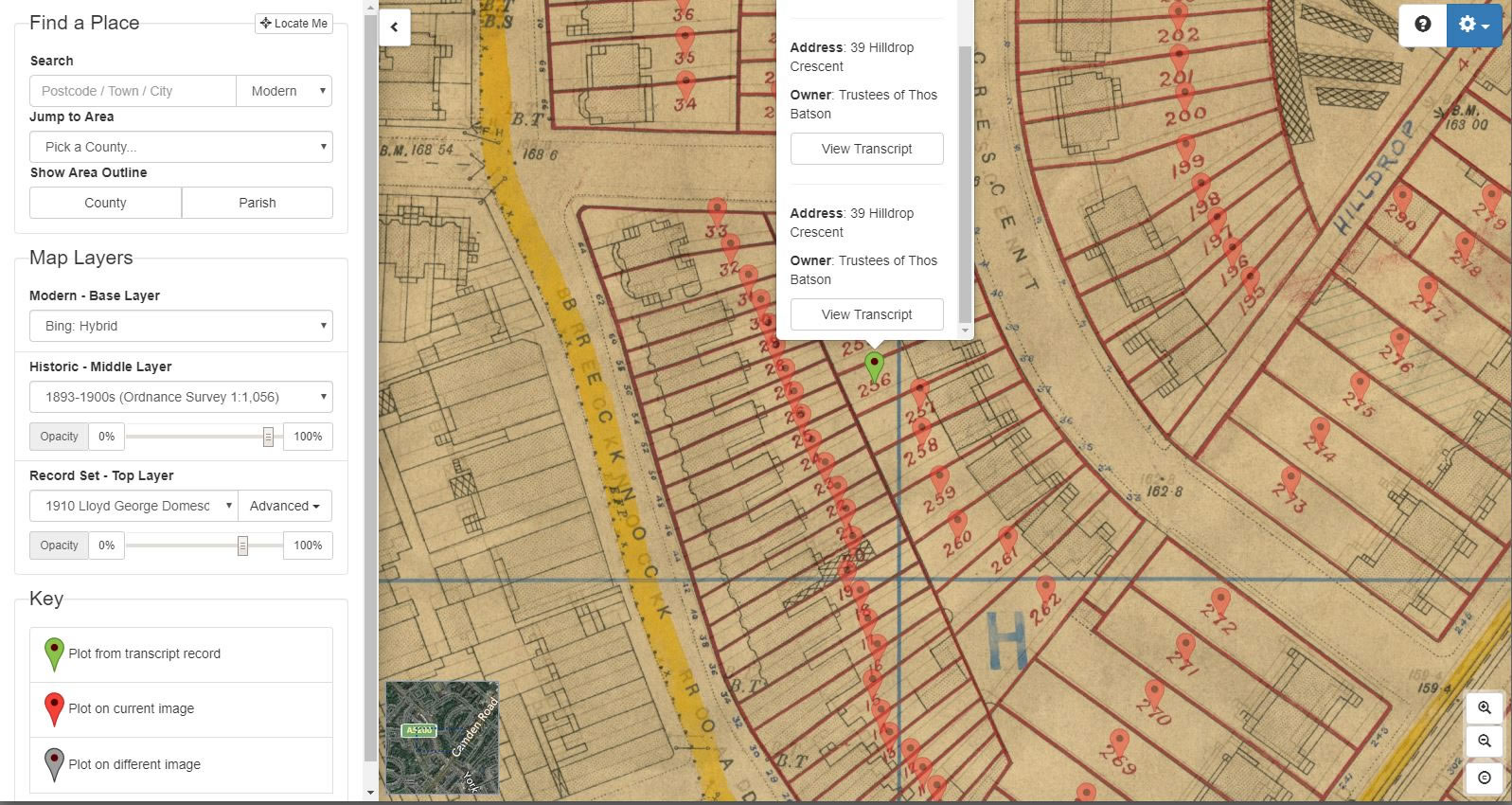 Dr Crippen lived at 39 Hilldrop Crescent that we can now identify was in the south west quadrant of the crescent.

By clicking the link to View Transcript from the Map Explorer we are then able to look at an image of the field book. The first page relating to the entry follows the mundane normality of many of the other houses in the ownership of the landlord, the Trustees of Thomas Batson. However, a click on the button to view the next image reveals that the surveyor was all too aware of the infamy of its former tenant. After noting that it was "Similar accommodation" to its neighbouring property, they have then written: "This house was occupied by Crippen and is notorious in consequence. It is now let to Sandy MacNabb..." and gives the figures for the rent.

Further research on the Islington.gov.uk website reveals that Mr MacNabb, a Scottish comedian, reputedly ran the house as a Crippen Museum. After it was not successful he then converted it into a boarding house for music-hall and theatrical artists. 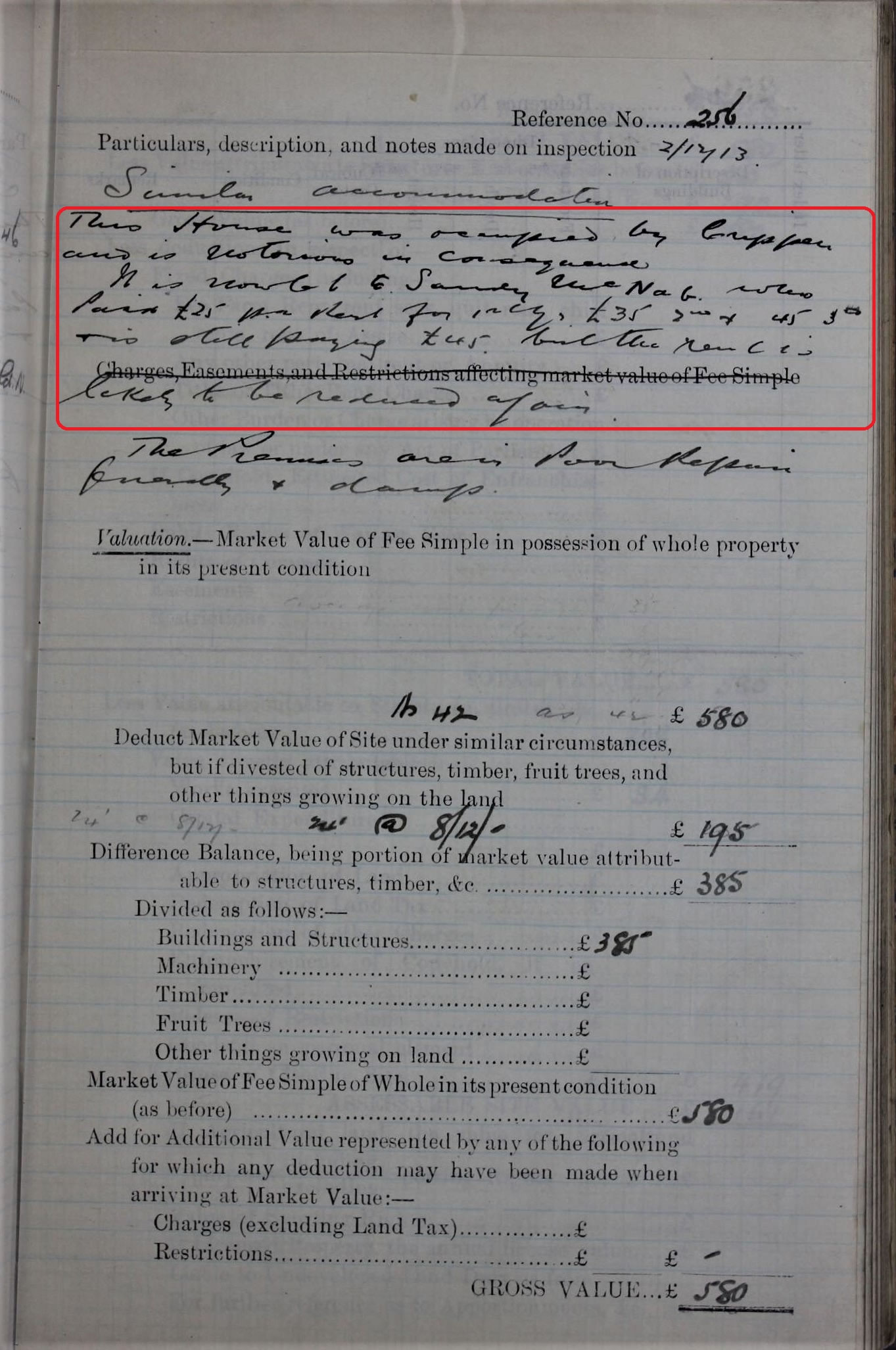 The IR 58 field book notes: "This house was occupied by Crippen and is notorious in consequence."

These land records (sourced from The National Archives) that are being exclusively released online by TheGenealogist are a fantastic resource for family history research. This is especially the case when you can find out more about an ancestor's house that is no longer in existence and so does not appear on a modern map.