Merchant Seamen Apprentices to Captains of the Cutty Sark

Discovering that one of your ancestors went to sea in a merchant ship would be a fascinating path for your research. The latest release from TheGenealogist may well help you to discover them and the details of their lives. Some men as young as 14 were apprenticed for up to 6 years to learn the trade of a Merchant Navy seamen and a number of them would then rise up the ranks to become Captains of ships. 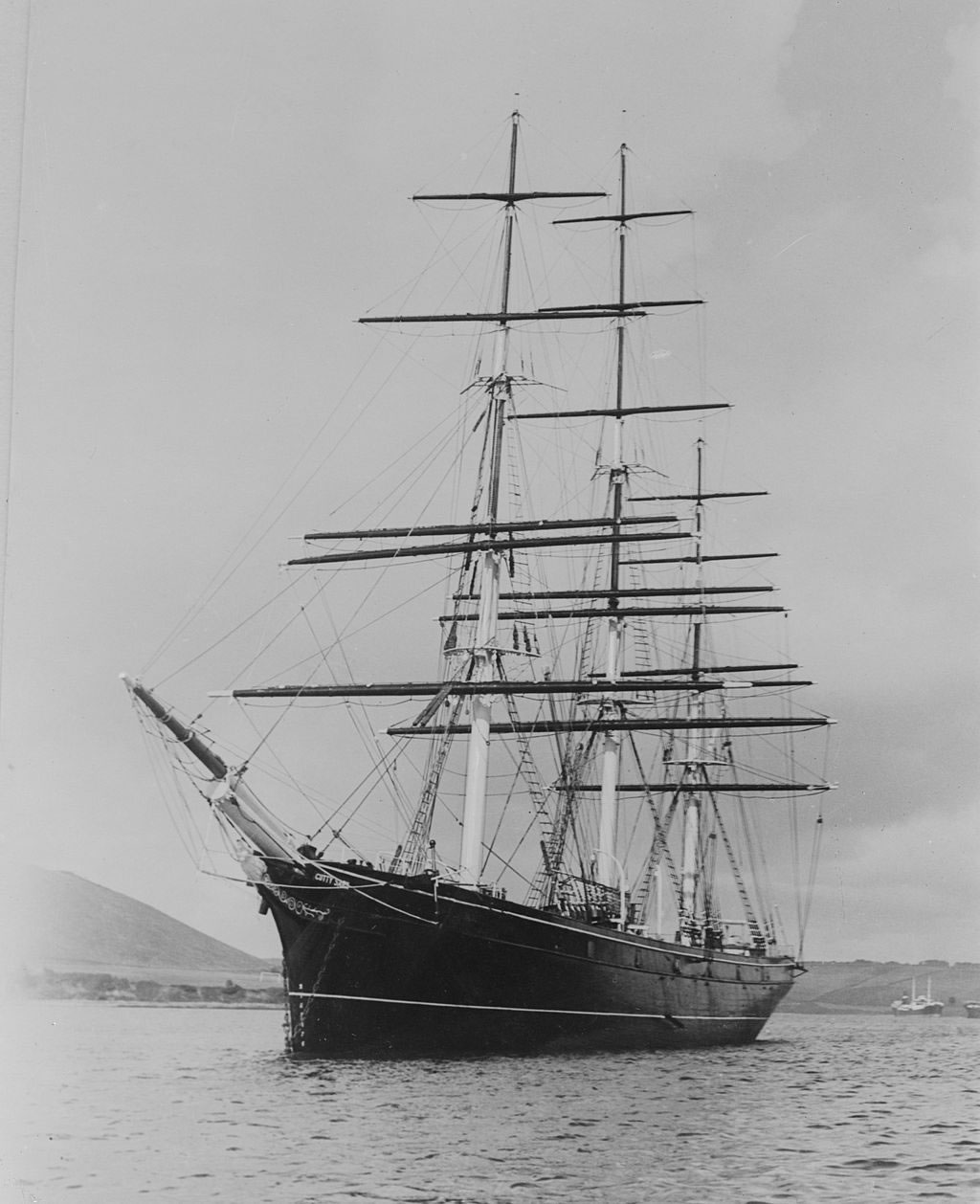 Britain has long been celebrated as a seafaring nation with many famous ships to her name. Some of them, such as the Mary Rose and the Victory were warships, but others were famous for being traders or merchantmen. Perhaps the most famous of all is the Cutty Sark, built in Dumbarton in 1869 to be one of the fastest tea-clippers of her time. A tall-masted sailing ship, she was one of the last in a line of wind powered ships whose design had developed over the years only to be superseded by the introduction of steam powered vessels.

The Cutty Sark was built for the London based company of John Willis & Sons. Its owner was Jock "White Hat" Willis, the white top hat wearing son of the company's founder "Old Stormy Willis". The ship entered service at the time of the opening of the Suez canal that now allowed steamships to compete on the tea run from China. Cutty Sark therefore spent only a short time carrying tea before turning to the transportation of wool from Australia to Britain.

The Captain who jumped over the taffrail

Over her time at sea, the Cutty Sark had a number of Captains. From the latest records released on TheGenealogist of Merchant Navy apprentices, some of them began their career at sea with boyhood apprenticeships. One such was James Smith Wallace who in 1870 was apprenticed in Aberdeen for four years at the age of 17. He joined the ship Bundaler and by the age of 19 he had obtained his Second Mate's certificate and began working on a steamship named the Gordon Castle. His Master's certificate followed five years later when he was 24, and as there were no Captain's positions available to him he took work on the Cutty Sark as its First Mate in November 1877. 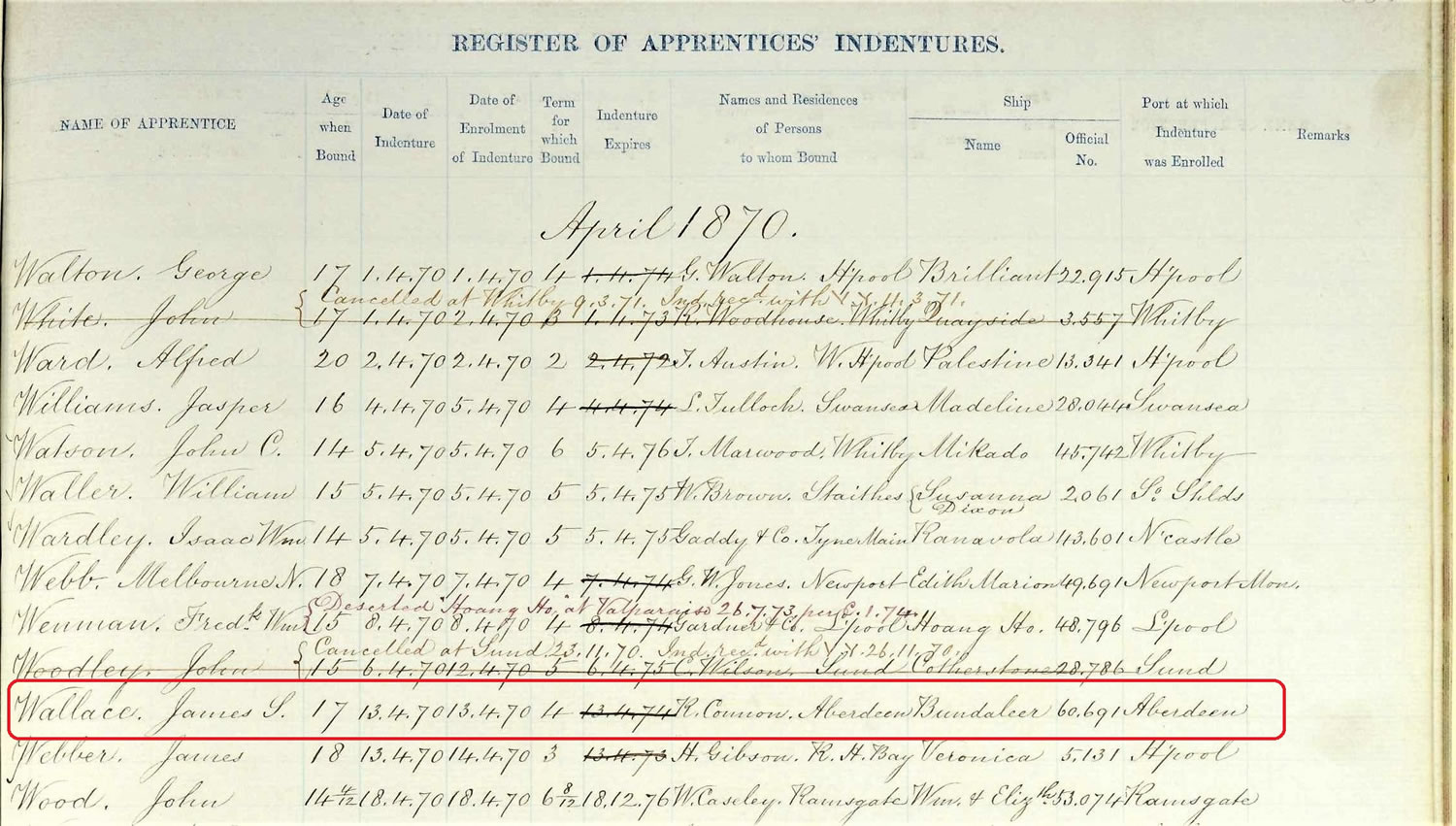 The ship sailed on 2nd December 1877 from Britain heading for Australia and reaching Sydney in 69 days. From there the Cutty Sark sailed to Shanghai with a cargo of coal, arriving in October 1878. Her Captain at the time, William Tiptaft, became sick in the Chinese waters with dysentery and in a few days he was dead! The young Wallace was promoted to be captain of Cutty Sark, though he was now just 25 years of age. Taking his first command he completed the voyage by returning the ship to London in January 1880. There then followed a short second voyage... and then came his third and last.

Wallace's First Mate on the trip was an officer called Sydney Smith and he came with a reputation as a bully. Also onboard was a crew member named John Francis who resisted the First Mate's authority and disobeyed an order. There followed a physical fight that ended up with the crew member sustaining serious injuries that led to his death three days later.

With the demise of Francis, the First Mate was confined to his cabin until the Cutty Sark reached Anjer in what is today Indonesia. Here the young Captain Wallace made a serious error that would have terrible consequences for him. He disposed of the murder weapon and allowed First Mate Smith to jump ship and escape. The Cutty Sark's crew were incensed and this led to some of them having to be constrained in irons.

Captain Wallace, whose short career seemed to have had such promise from the time he had completed his apprenticeship to become the Master of the Cutty Sark, now realised that it was over. He was looking at the loss of his Master's certificate and shame on himself and his family. Deciding that the only option was to end it all he stepped over the taffrail at the stern of the ship and drowned in the shark infested waters. Today a small brass plaque is screwed to the deck of the Cutty Sark which can be seen on a visit to the ship at Greenwich.

The Inebriated Captain and his starving crew

The next Captain was William Henry Bruce whose indenture in 1853 we can also find in the records on TheGenealogist. His tenure of the ship was not a happy one. Joining the ship in September 1880 the voyage was to last until April 1882. In this time his failings in seamanship and as a Captain became apparent. The crew had little confidence in him and he and the First Mate would often drink to excess. These two officers, at the head of the command of the ship, were not running the vessel in an appropriate way and when the crew's rations ran out sailing to America, on reaching New York they complained to the Port of New York Authority. An official complaint was raised and the investigation found in favour of the crew. Captain Bruce and his First Mate had their certificates suspended and were discharged from the Cutty Sark. 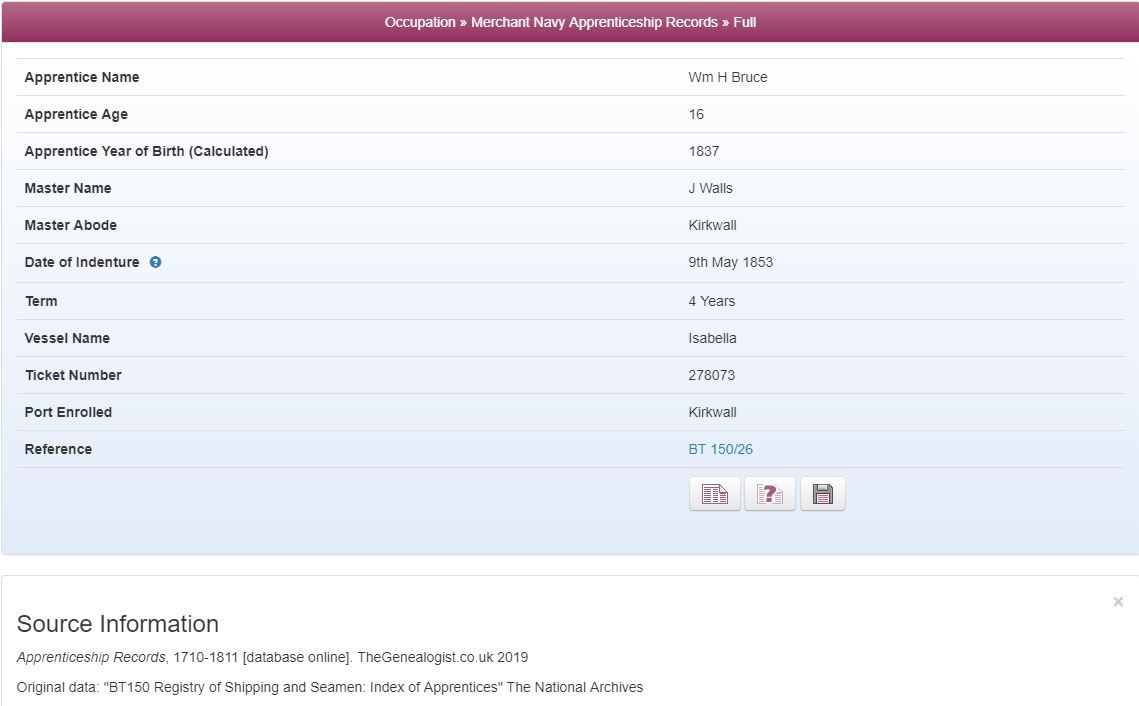 The ship needed a new Master and so "White Hat" Willis transferred Captain Frederick Moore from one of the other ships to the clipper. We can find that F. Moore started out his career at sea in 1853 at the tender age of 14 when he was apprenticed on the Elija for 6 years with J. Sprate of South Shields. By 1882, with many years of service under his belt, the experienced skipper took on the Cutty Sark finding that maintenance on the ship had been neglected by his predecessors. He is best known for keeping detailed log books of life onboard Cutty Sark that reveal to historians the workings of a mighty clipper ship, even when she was in port. 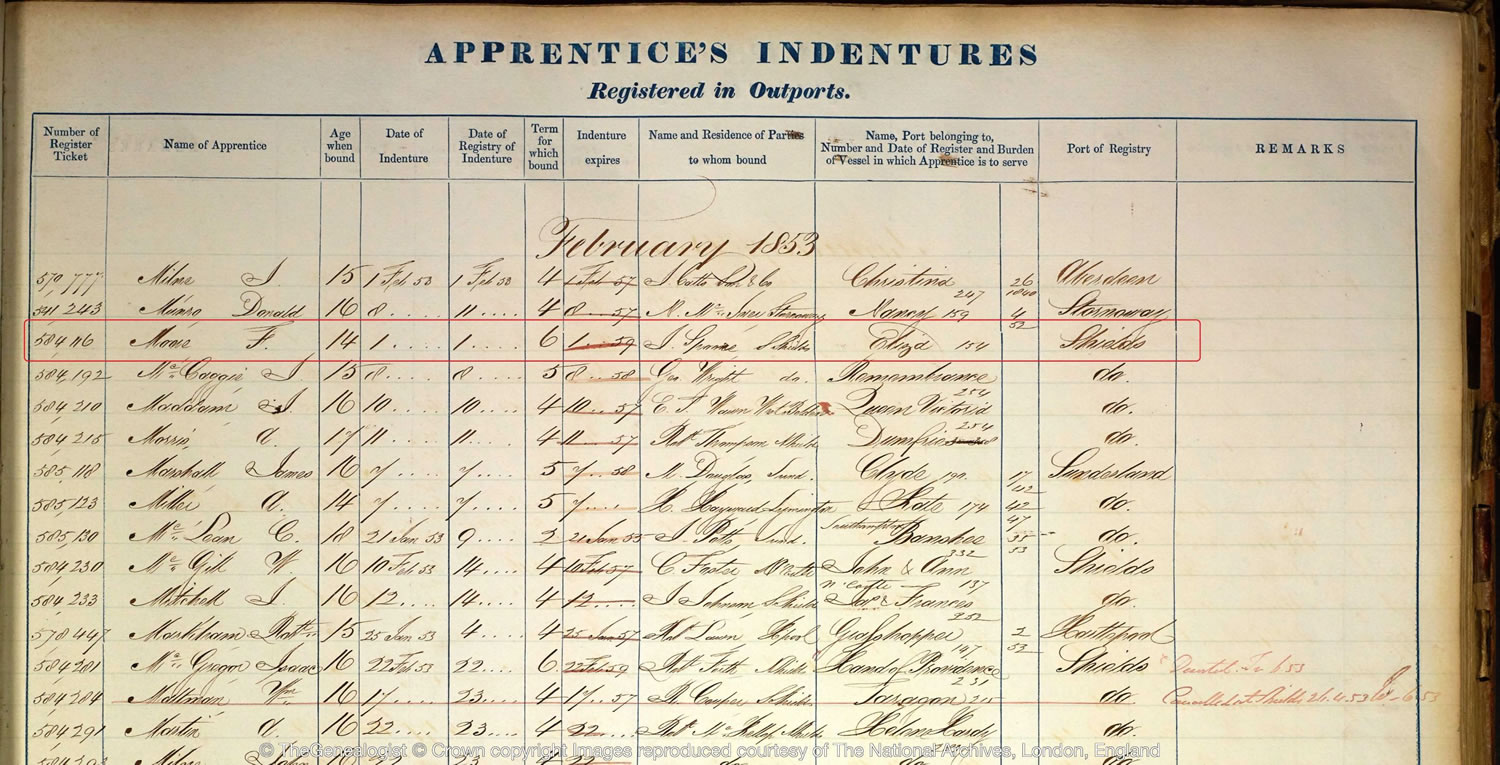 F. Moore apprenticed to J. Sprate of South Shields on the Elija 1853

Captain Richard Woodgate was perhaps the ship's most successful Master, breaking records for passages and turning a good profit for the ship's owner. His maritime career began in 1861, as a 16 year old apprentice to Daniel King, a London-based ship owner, as we can find in the apprenticeship records.

Once he had his Master's certificate he then sailed as the mate on a ship for seven years before finally gaining the captaincy of one of Willis' ships, the Coldstream. Taking command of the Cutty Sark, Jock Willis was impressed with Captain Woodgate's ability to push the clipper to her limits without being reckless and so achieve good times between ports. Captaining her for more voyages than any of the ship's previous Masters, we can find that his three sons, Richard, Harold and Albert all sailed as apprentices under their father. Richard Jr did all four years of his apprenticeship on Cutty Sark and would rise to be her Second Mate, before eventually moving up to become the First Mate of this famous ship. 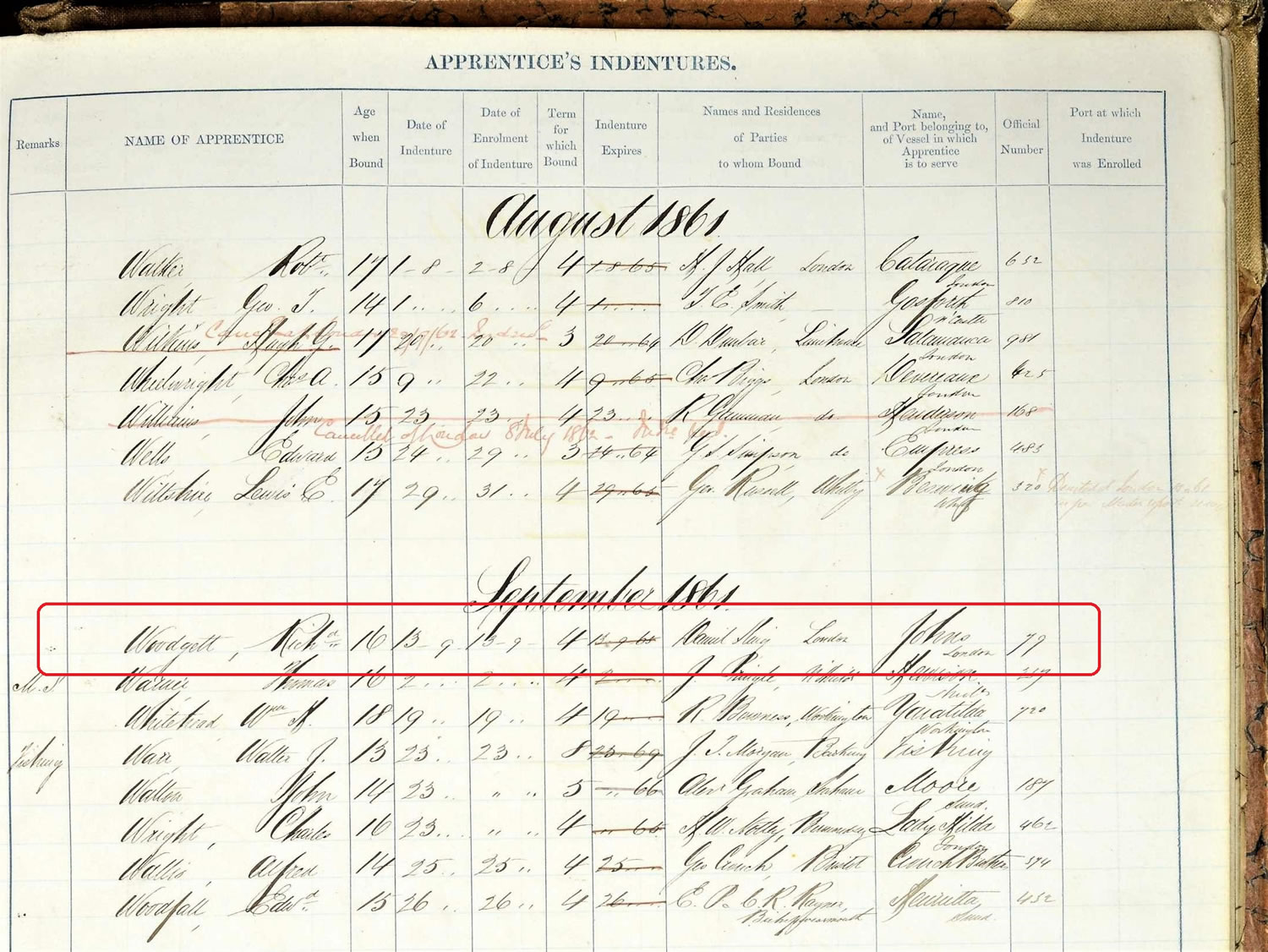 A colourful life at sea can be a fascinating part of your family history and checking these records is now easier than ever. Did your ancestors learn the trade of being a professional merchant seaman?

The records on TheGenealogist allow you to discover the age of an ancestor at the time that he went to sea, find the name of the company that he was apprenticed into and also the port where his apprenticeship had been recorded.