New Map Explorer™ reveals where our ancestors' streets once stood

A significant development for family history researchers looking for where their ancestors once lived and for those wishing to trace house histories...

TheGenealogist has released the new Map Explorer™ which promises to be a significant development for family history researchers looking for where their ancestors once lived and for those wishing to trace house histories. This powerful tool has been developed using georeferenced historic maps with the facility to overlay the area over several modern background maps including those from Ordnance Survey and Bing Street maps, as well as a satellite view.

Soon to be available will be the ability to locate owners and occupiers from the tithe maps from TheGenealogist's National Tithe Map collection and other map collections as they are uploaded to the website. At launch, the new Map Explorer™ will include all the previously released Lloyd George Domesday Survey maps linked to the field books. The explorer is not simply just a way of viewing the Lloyd George Survey data, however, but is a tool that can be used to identify land occupation over time.

Where is that today?

Family history researchers may have found an address for an ancestor in a census or street directory and have noted down the street's name in which the family had once been living. Armed with this information they may then decide that they want to find the exact location of their ancestor's home on a map - but this often raises the question of just where exactly it is today?

Problems occur when we simply turn to a modern online map and jump to a point on the street plan. This strategy makes no allowance for any redevelopments that may have taken place over the intervening years from when the census was taken. Apart from the areas bombed in the Blitz, many other roads will have changed and in some cases, this has been in a dramatic way. Since our ancestors' times, urbanisation has crept out and now surrounds even those smaller country towns and villages. Other places will have seen rows of terraced houses make way for blocks of flats. The redevelopment may extinguish roads, truncate them into shorter routes or redirect them. This can be confusing when looking for the home of a past member of the family if the house numbers and the road name have been reused in the present street.

However, using the new Map Explorer™, you can choose between a historic or modern place search, solving the problem of an address not existing today. Once you start entering the street address, the search box will populate with options. Clicking on the correct one will cause the explorer to jump to the street on a historic map and briefly highlight the road with a pin.

You are able to decide which historic map to view by choosing between various "Historic Layers" such as the Ordnance Survey Series for 1893-1900s, 1919-1947, 1937-1961 or 1955-1961. Using the transparency slider from the controls will reveal or hide the modern street map beneath - this facility allows you to see the present-day topography which may be very different from that of your ancestor's time. Switching between the historic and the new maps will very often show that modern redevelopments, road layout changes and the urbanisation of the countryside have completely changed the area that an ancestor had once lived in, making it unrecognizable from the way it was in their time. The modern map layers can also be changed between various options and even include a satellite image view. The search interface on the new Map Explorer™

The Quay on dry land

Using the new Map Explorer™, let us look for an example - in this case, Mr John Pickett who was a boat builder from Southampton. By using the 1911 census on TheGenealogist we find that the 62 year old recorded himself as a yacht builder. The 1913-1914 Kelly's Trade directories on TheGenealogist reveals that John Pickett had once carried out his business from premises at West Quay Southampton where he is listed under the section for Boat Builders. 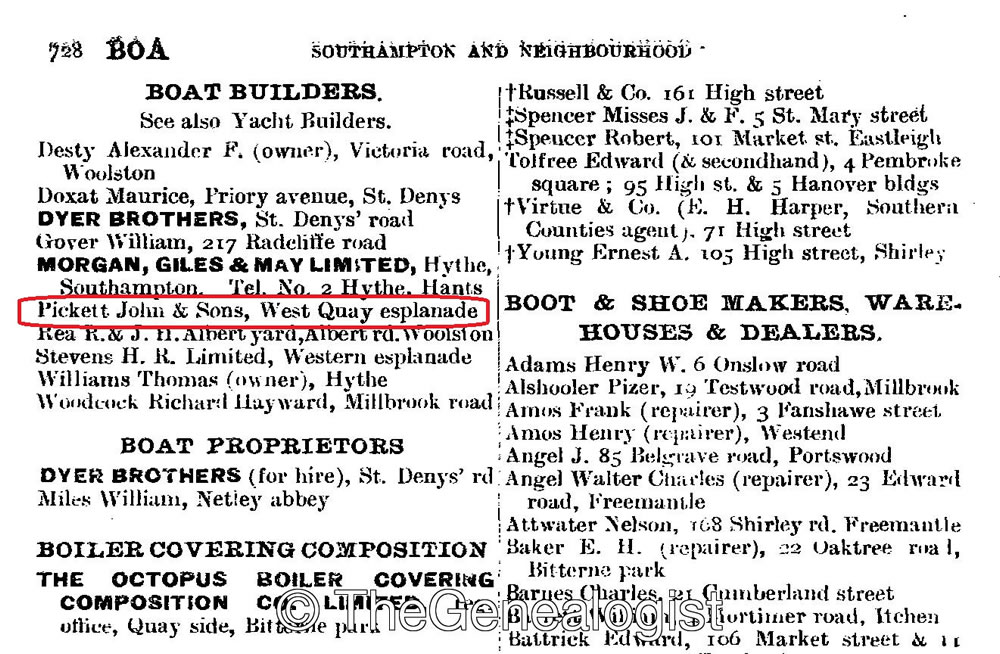 The 1913-1914 Kelly's Southampton directory on TheGenealogist

Another entry in the same directory lists him as the honorary treasurer of the West Quay Regatta Club, which had its clubhouse at West Quay as well.

The 1913-1914 Kelly's Southampton directory on TheGenealogist

While it is not always the case, you would expect to find a boat builder and a yacht club on the waterfront, and yet by turning to a modern map, West Quay is indicated as being some distance inland. Looking for where this is located is frustrated by the fact that the road of that name today is not the same road as the West Quay from Edwardian times. The modern West Quay Road runs from Town Quay road to Mountbatten Way, as can be seen on the hybrid satellite/road map shown below. 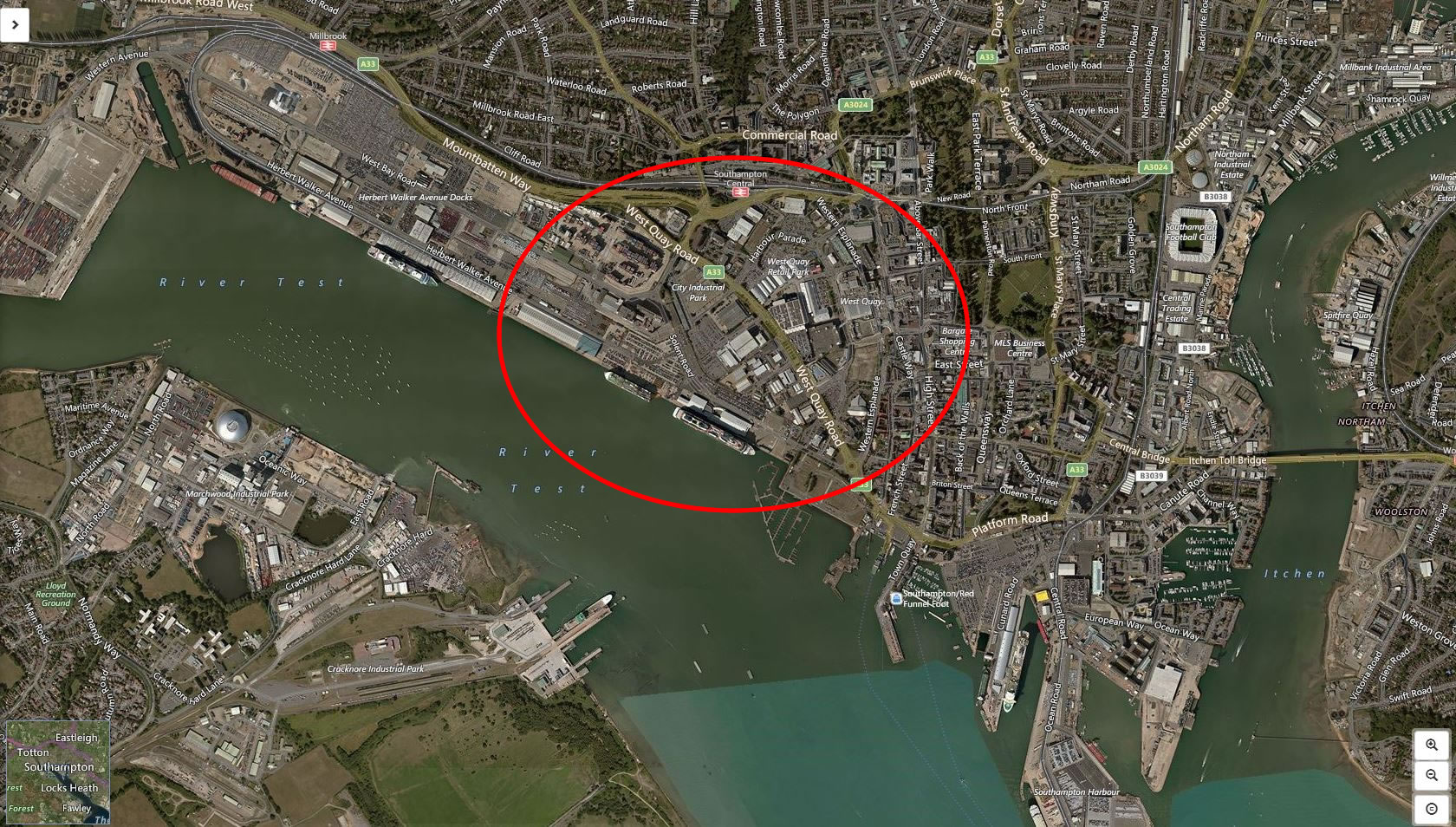 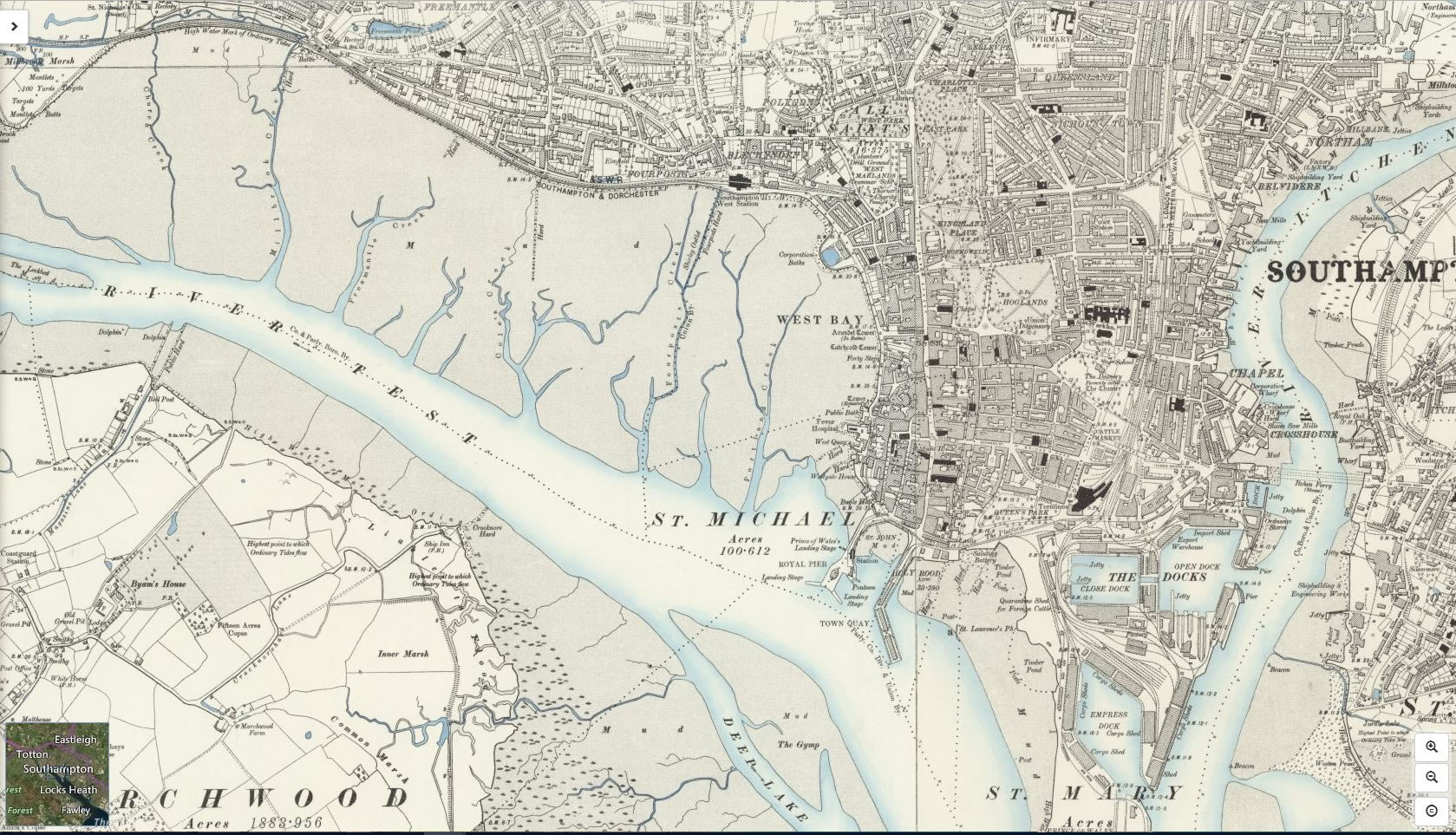 Southampton's western boundary had once been defined by a bay that was known as West Bay. In the 1920s a scheme was undertaken to reclaim 400 acres of mud flats and so create the modern Southampton Docks with its berths for gigantic cruise liners and cargo transporters. The street where the yacht builder lived and ran his business was in West Quay road that once ran alongside the shoreline but has now been built over.

By using TheGenealogist's Map Explorer™ with the "Ordnance Survey 1893-1900s" as the Historic Map and the Bing Hybrid map as the modern map, we can locate where this road once ran by the blue pin that TheGenealogist's Map Explorer™ drops on the road. What we notice is that this "old" West Quay Road runs approximately north-north-east to south-south-west from the West Quay on the West Bay. The ability to use the transparency slider to fade between the historic map and the modern map now reveals that the road is today called Western Esplanade. 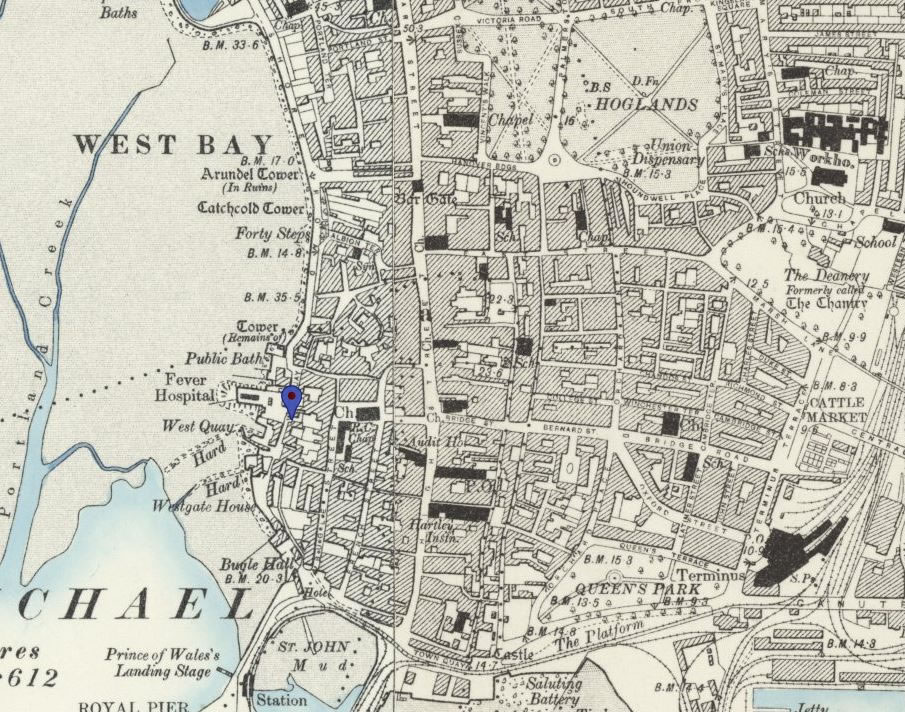 As a result of the People's Budget of 1909/10 that would see new social measures such as old age pensions introduced, the government had to undertake a massive survey of the entire country between 1910 and 1915 to introduce a new tax based upon the increase in the value of property over time.

The government's Valuation Office turned to large scale Ordnance Survey maps that plotted each house or piece of rateable land and cross-referenced the plot with details of the property recorded in surveyor's field books. For family history researchers, this collection gives a snapshot of the topography in the period just before the First World War. TheGenealogist's unique Lloyd George Domesday Survey is a goldmine as each area comes online. Eventually, it is expected to cover the whole country, but as it is a massive undertaking this will take some time. TheGenealogist has begun with areas of London and will then move outwards from the capital. If you are searching for a person from results returned in the Lloyd George Domesday survey, the Map Explorer™ shows a green pin on the property that had been recorded. It is also possible to take a look at the neighbouring schedules by clicking on the red pins and selecting 'View Transcript'. Grey pins allow you to view the details of properties from other maps.

As an example of how the new Map Explorer™ can reveal how the environment has changed in some places since the Lloyd George Domesday Survey, we can look for the area around Harrow Road. In Cirencester Street near Harrow Road stood a pub next to the Girls and Infants department of St Mary Magdalen School with the main Boy's School occupying the building behind the hostelry.

While Cirencester Street can be found on a modern map of London there is no sign of the building that the field book estimates was built in 1870/4. The present day road is short, while the Historic Map identifies it as being a much longer road that ended with another pub on its corner. The Lloyd George Domesday Survey record identifies the properties from the time showing many pins on the map. If we use the transparency slider to reveal today's maps beneath the historic Ordnance Survey map it then shows that much of the road has now gone completely, along with the road that ran beside the canal. Strikingly, the present day roads do not follow the lines of those that had been there in the Edwardian period. While there is now a Woodchester Square on the modern map it is not the long straight road that was called Woodchester Street and that existed in Edwardian times.

By using this new tool the pub and the old schools would seem to have once been located where there is now some open space in front of a tower block of flats. This neatly illustrates the problem of researching for where a person had lived in this area in the 1910s.

With this powerful new mapping tool, family historians can finally discover more accurately where their ancestors lived in the London area for the period just before the First World War. TheGenealogist has built an easy to use and handy interface for researchers to use. The facility to change the base map displayed in order to more clearly understand what the area looks like today and to overlay with a variety of old maps to see the wider area as it had once been is going to help researchers find ancestors' homes more accurately. Other settings allow the user to display county or parish boundaries and to search for a place. This unique Map Explorer™ is a boon for genealogists as it adds insight into where your ancestors lived.