A haven for the troops and the birthplace of a V.C. hero

Opposite the Houses of Parliament, on the south bank of the River Thames, lies Lambeth. Once part of Surrey and now a London Borough, at the time of the Lloyd George Domesday survey in 1910-1915 its inhabitants included all those who lived in the civil parishes of Bishops, Brixton North and South, Clapham North and South, Marsh North and South, Norwood and Lower Norwood, Prince's, Stockwell North and South, Streatham and Vauxhall. 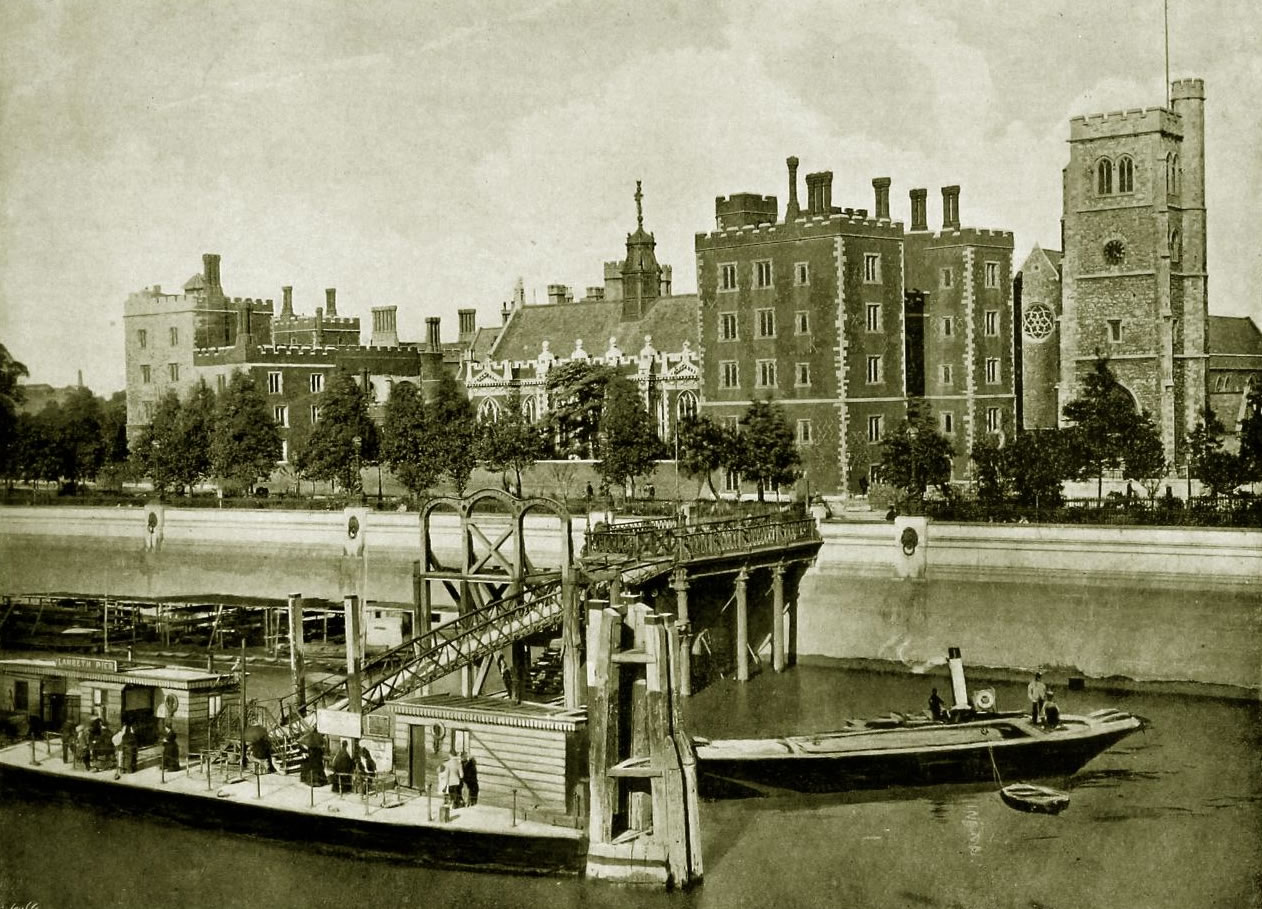 The home of the Archbishop of Canterbury, Lambeth Palace, is here, Royal Doulton's pottery works once turned out its porcelain wares in Lambeth and apart from several important Underground stations its main railway terminus is Waterloo Station. As we mark Remembrance Sunday and Armistice day this week it is fitting to bear in mind that Waterloo Station would have been the place where many thousands of troops embarked on their journey to the front and the horror of war that awaited them there. 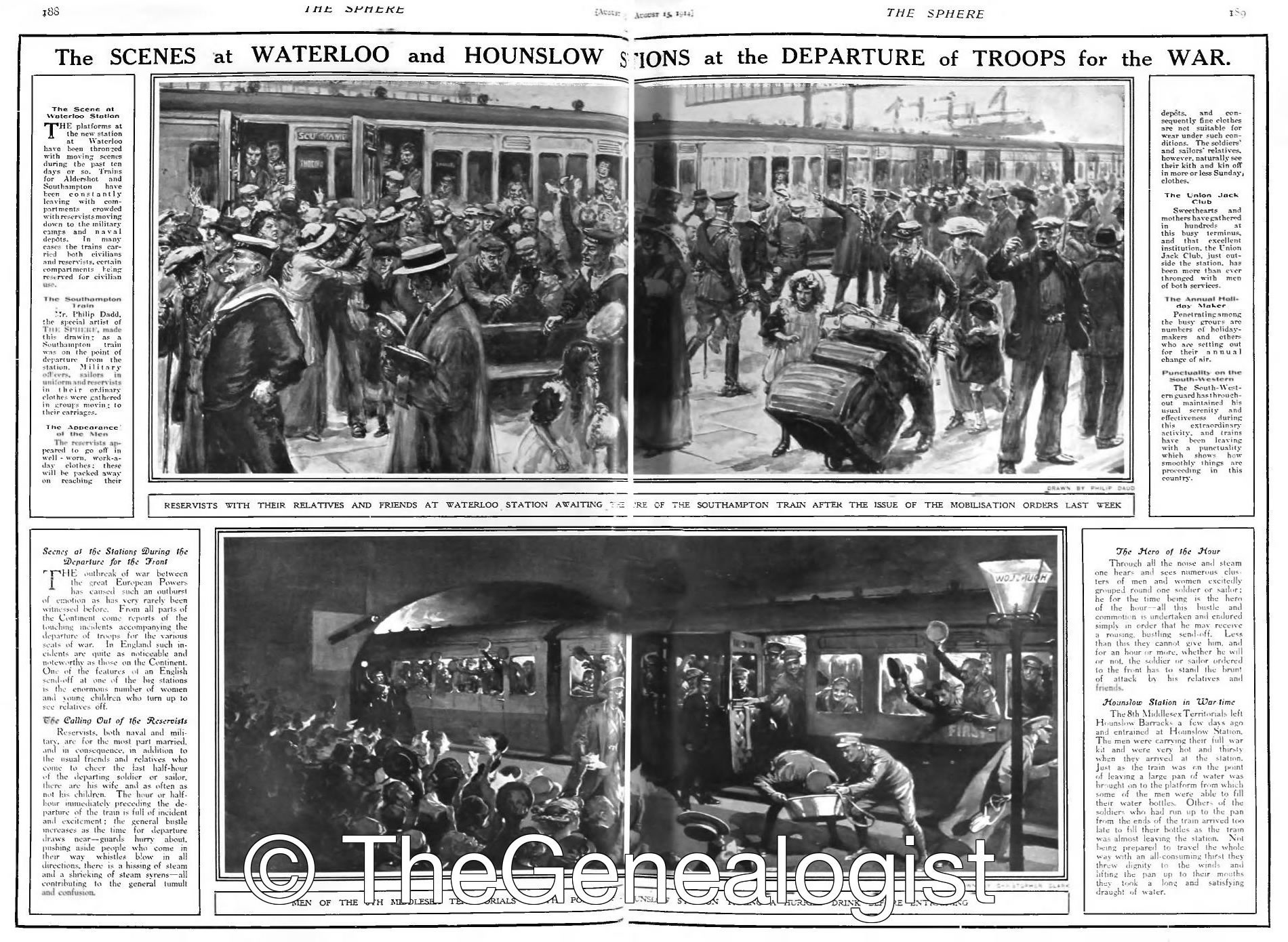 The Sphere August 15, 1914 from TheGenealogist's Newspapers and Magazines Records

When the soldiers, sailors and airmen returned to England, on leave from the fighting, it was often to spend the night in Lambeth, before they could travel on to their homes across the U.K. For this reason a very special place was situated in Lambeth's streets, that many men would have sought out. It was the Union Jack Club, across the road from the huge station, and where hospitality was available to them at a reasonable price.

This Armed Forces Club was the idea of Ethel McCaul, a Royal Red Cross nurse who served in field hospitals during the South African War at the start of the 20th century. She had recognised that many officers would enjoy membership of a gentlemen's clubs in London and could break their journey to stay at their club. For the non-commissioned officers and other ranks, however, there was no equivalent for them and so they had to resort to meeting in public houses and getting a bed for the night where they could. The war time demand put the Union Jack Club under massive pressure and so from a look at the Newspapers and Magazine records on TheGenealogist we are able to see an advertisement in The Illustrated London News from 1917. This shows how the Union Jack Club was now overwhelmed and was seeking donations so that it could extend its accommodation for weary British and Allied servicemen. 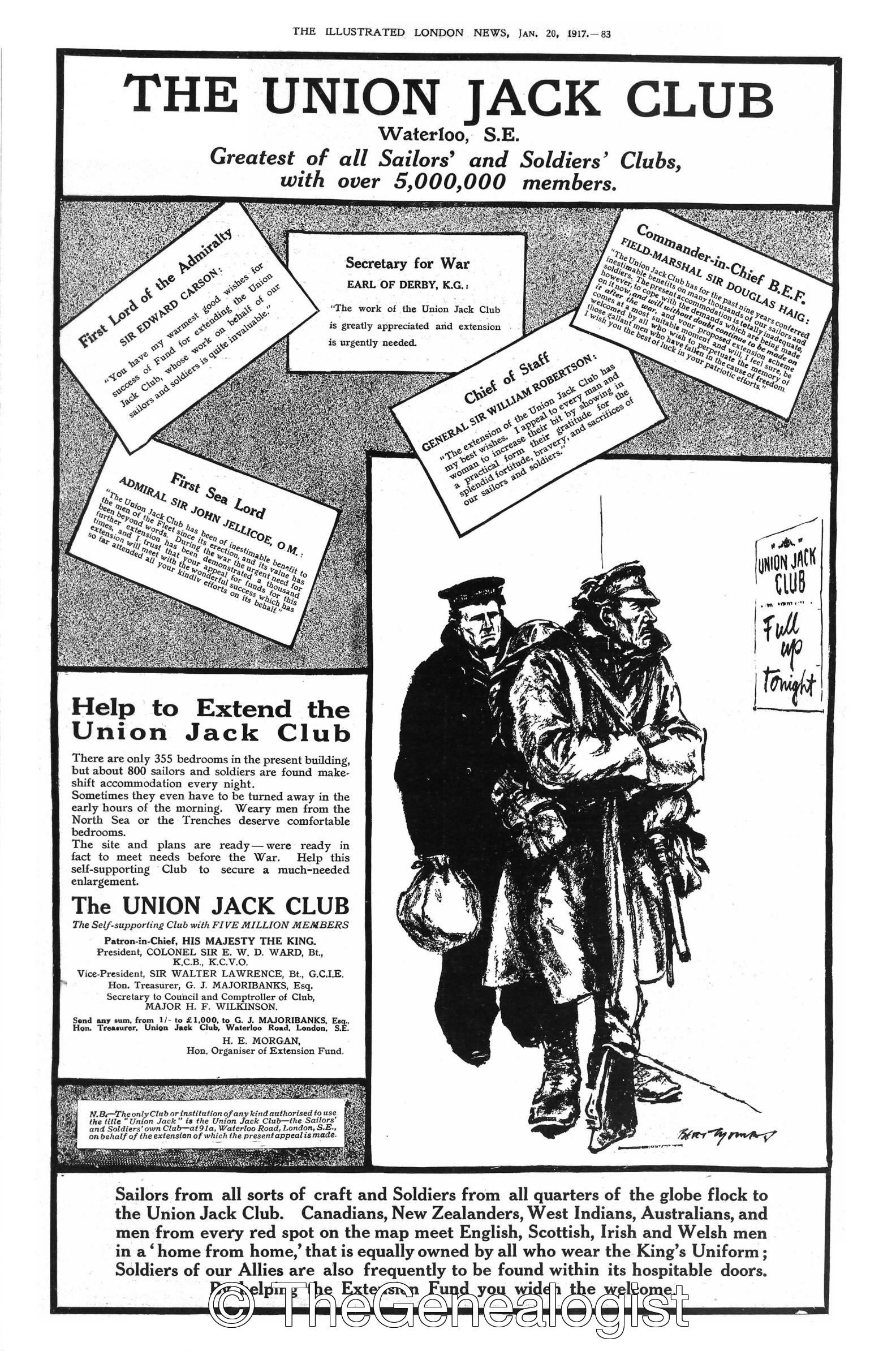 The Illustrated London News January 20, 1917 from TheGenealogist's Newspapers and Magazines

The Union Jack Club's building features in the Lloyd George Domesday Survey records as it was before the First World War had begun and when the government embarked on a survey of property between 1910 and 1915. 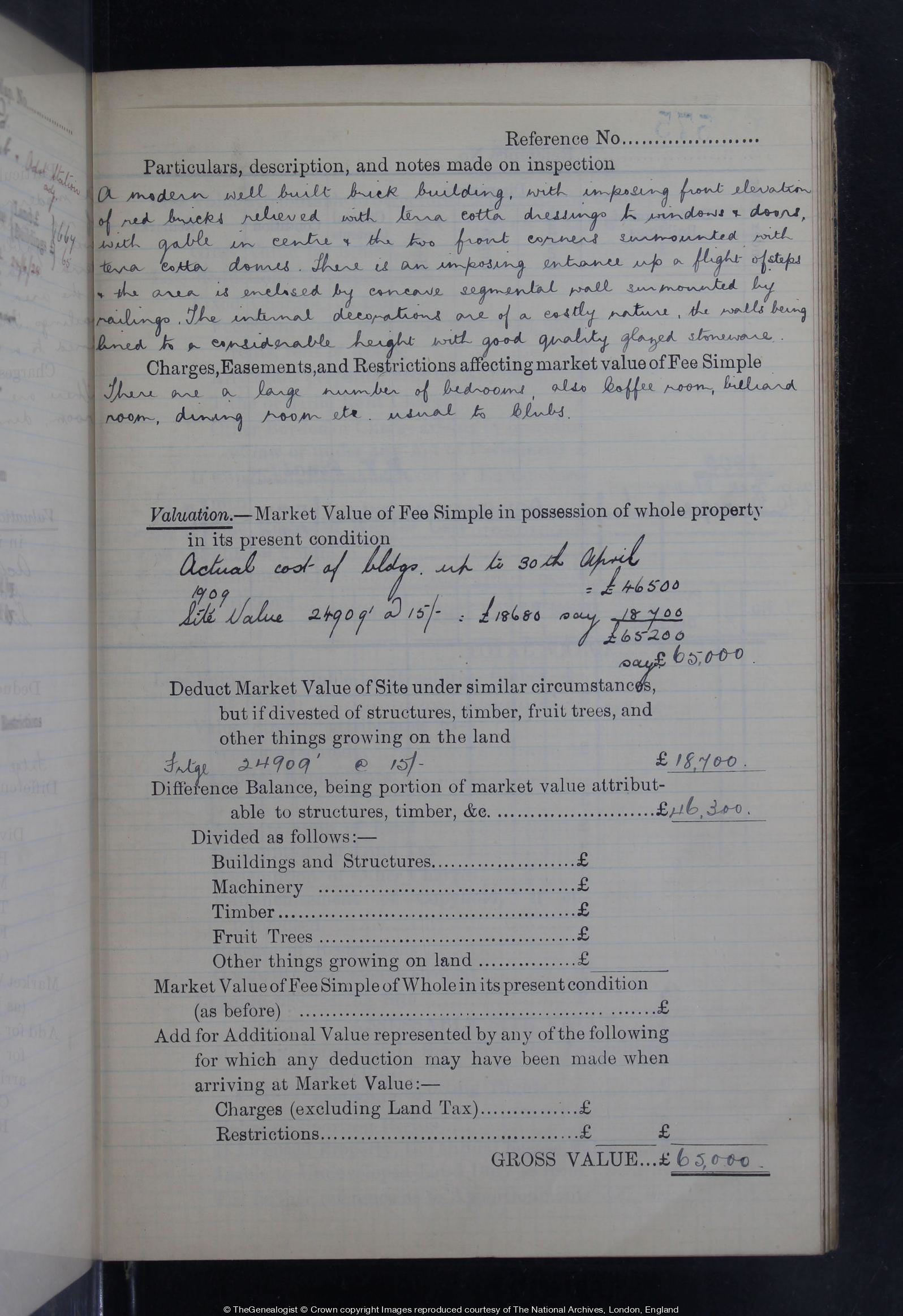 At this time the club was recorded by the surveyor as a "modern well built brick building with an imposing front elevation". The internal decorations were noted to be of " a costly nature". 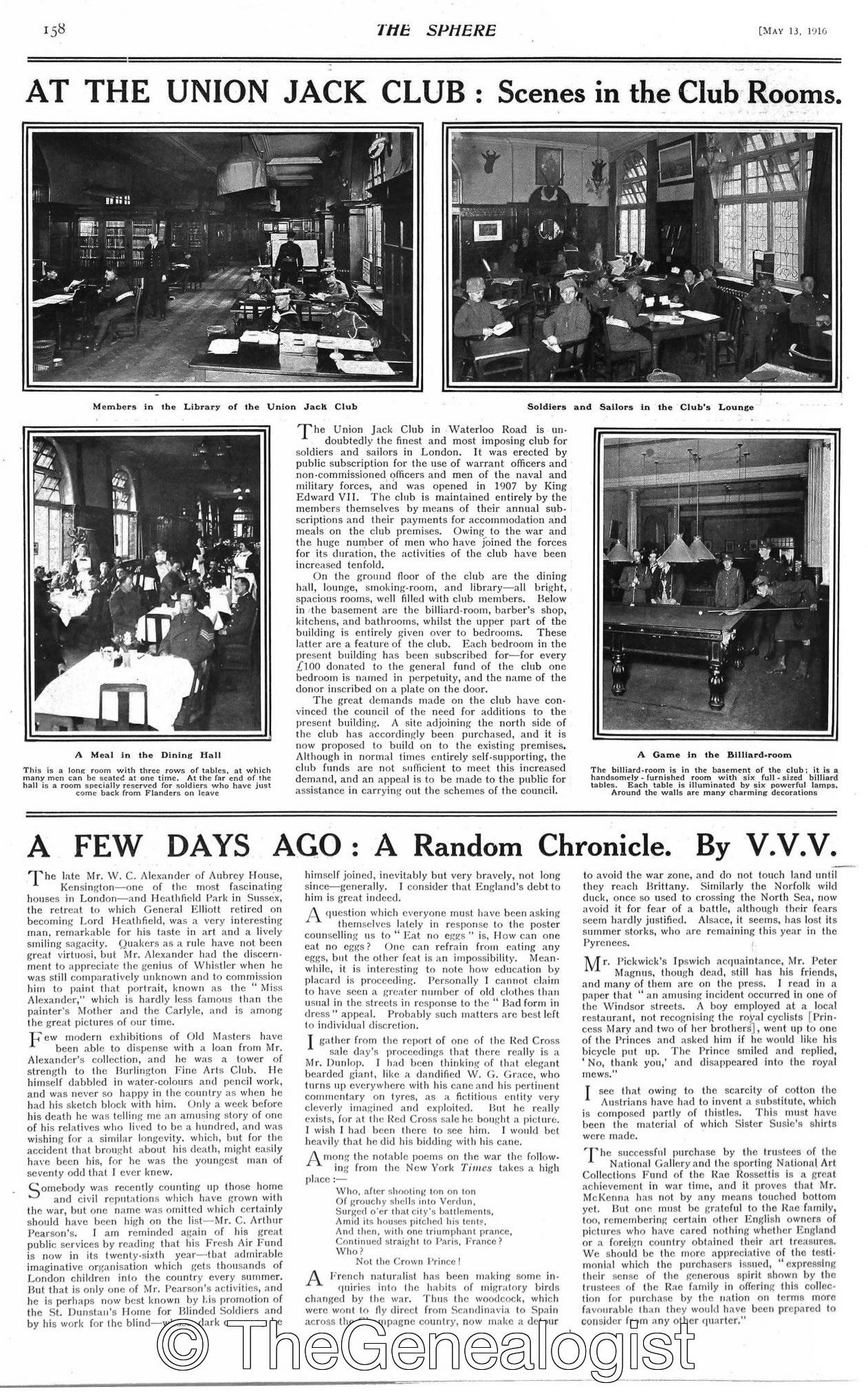 In the Second World War the Union Jack Club again was a haven for returning service personnel. Its neighbourhood around Waterloo Station, however, was subjected to heavy bombing and the Union Jack Club itself suffered considerable damage that required extensive repair. The club, however, survives today though by the end of the 1960s it saw the need to modernise its amenities, décor and the way it conducted its business. For that reason it was decided to construct a completely new building in 1970. Investment in Industry (now known as 3i) built three tower blocks and leased one for themselves for a period of 125 years. The other two tower blocks would constitute the new Union Jack Club with an entrance on Sandell Street around the corner from the original, though still using the same site as the old club building. Demolition work began in 1971 and the Union Jack Club opened for business on its new premises on 16 October 1975.

War Memorial to V.C. recipients inside the club 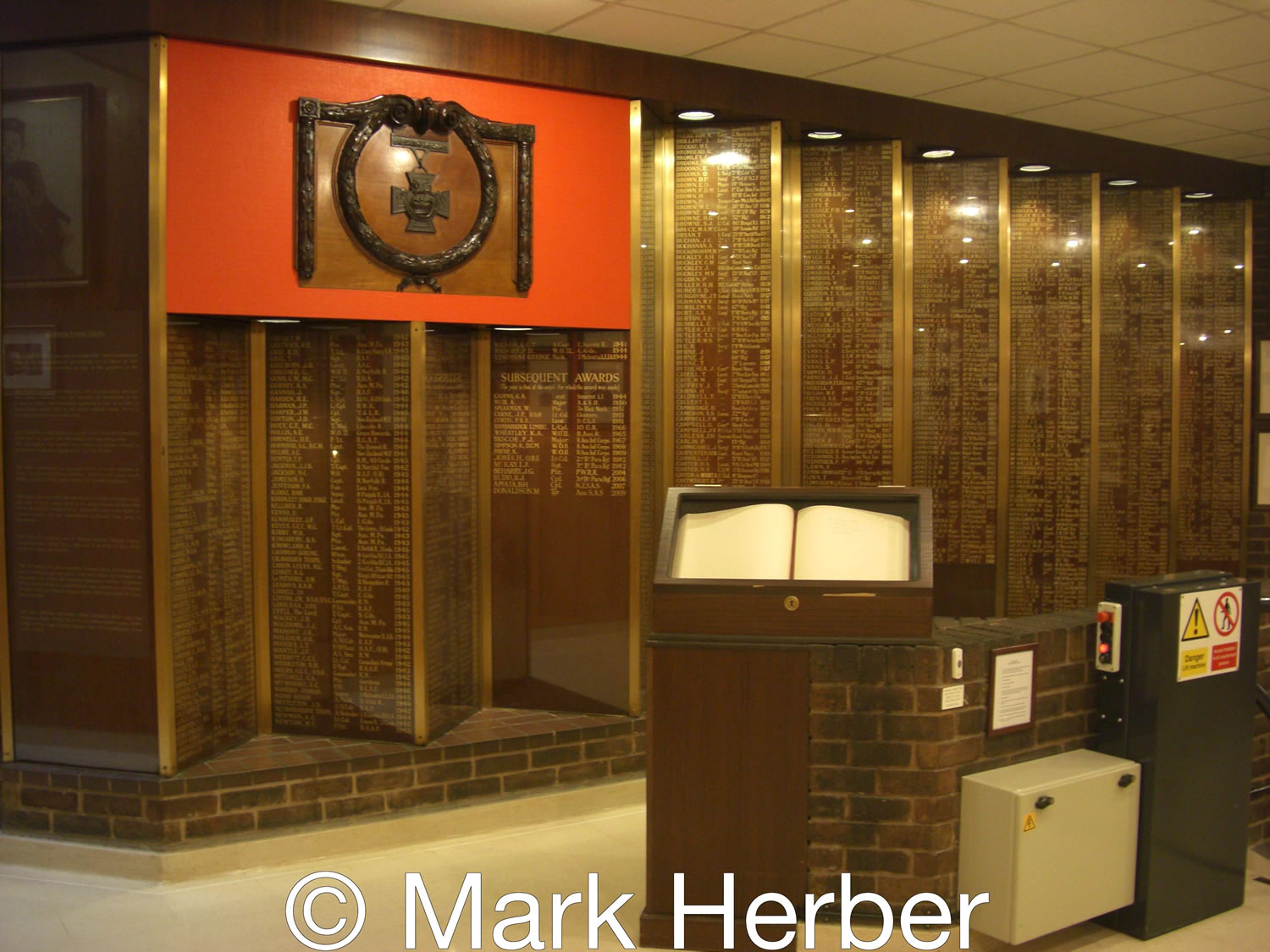 Inside the modern Union Jack Club is a glass fronted war memorial consisting of wooden panels. These Victoria Cross and George Cross boards are the only known commemoration of their kind to all those who have earned the Victoria Cross and George Cross. As part of TheGenealogist's Military records they have been photographed and transcribed and now are fully searchable on the site. Alternatively, war memorial locations can be found by using the Map Explorer™ to search around an area. Searching Lambeth finds a pin on Sandell Street and the Union Jack Club identifying six memorials there, including those of the V.C.s.

A V.C. hero born a stone's throw away

One of the names of recipients of the highest award for valour to be commemorated inside the Union Jack Club is local man John "Jack" Dimmer, who was born in Lambeth at 37 Gloster Street on the 9 October 1883.

The road where he was born is impossible to find on a modern map and so this is where the Map Explorer shows its versatility for family researchers. By selecting the 1900 map instead of the modern map on Map Explorer and then entering "Gloster" one of the options returned is for Gloster Street in Lambeth. Revealing the georeferenced base layer modern map, by using the opacity controls, shows us that the road is no longer there along with a number of other roads in its neighbourhood, perhaps as a result of WW2 bombing and subsequent redevelopment.

Gloster Street, Lambeth in the 1900s on Map Explorer™

The exact same area on the georeferenced modern map layer

Selecting the Lloyd George Domesday Records as the top layer now shows that, just before the First World War at the time of this landowner survey, Gloster Road had been renamed as Kenchester Street. With this tool we have now identified where Jack was born even though the road changed its name and has now been wiped completely off the modern map and its later name assigned to a new lane built in the neighbourhood.

Jack Dimmer's name on the V.C. board at the Union Jack Club from TheGenealogist's War Memorials

Jack's father had been an Able Seaman in the Royal Navy and on discharge had worked on the railways, perhaps why he lived near Waterloo. Marrying Jack's mother, Ellen Busby, in Lambeth in 1882 they moved to Wimbledon where Jack then went to school. Entering the world of work Jack spent four years in the office of a civil engineer, but in 1902 he enlisted as a private in the King's Royal Rifle Corps. Promotion to Corporal followed and he served in the wars in South Africa. Now a Lance Sergeant he studied to become a commissioned officer and in 1908 as a Lieutenant he was attached to the West Africa Regiment.

With the outbreak of war in Europe he went to France in August 1914 with the KRRC. By October of that year his Battalion moved out of Polygon Wood to Herenthage Chateau and then before dawn on the 31st October, the enemy attacked and A and B Companies were soon almost surrounded. Lieutenant Dimmer was recognised throughout this action for displaying great devotion to duty. He was duly awarded the Military Cross (London Gazette, 1st January 1915).

In November 1914 events would result in his most extraordinary feat of gallantry in the face of the enemy. Dimmer operated his machine gun during an attack on the 12 November at Klein Zillebeke, Belgium until he had been shot five times – three times by shrapnel and twice by bullets, and continued at his post until his gun was destroyed. Lt Dimmer was treated in hospital at the Bellevue Hotel at Wimereux, near Boulogne and while recuperating he read in the newspaper that he had been awarded the V.C. for his bravery!

A search of the Military records on TheGenealogist rewards us with a number of records to look at including his campaign medal card, as well as his mention in dispatches amongst various other useful records. 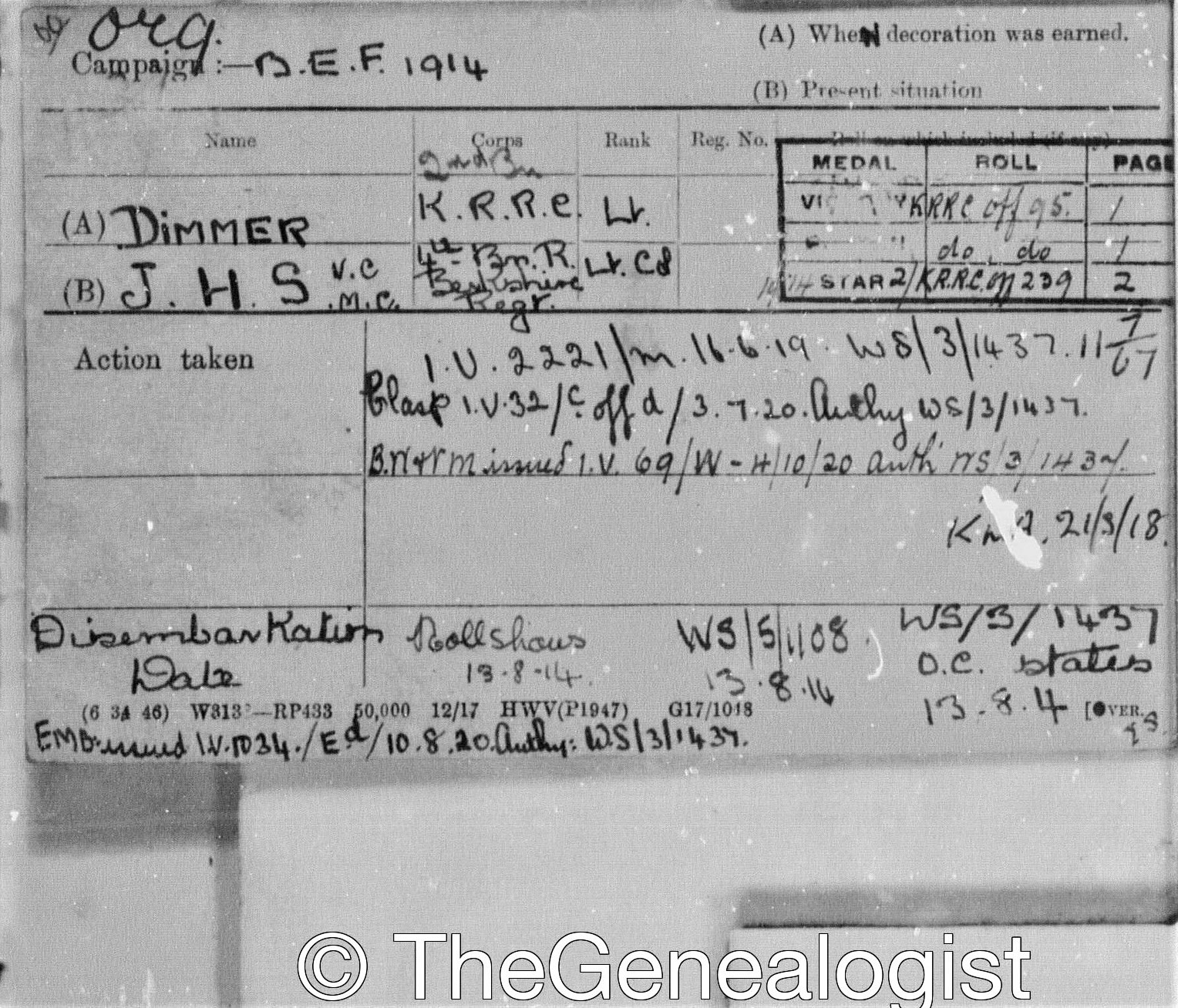 Another sometimes fruitful source for researching ancestors who fought in the service of their country is to look for them in the Newspapers and Magazines records on TheGenealogist. In Jack Dimmer's case we find a photograph of him mounted on a splendid horse and published in The Great War paper. 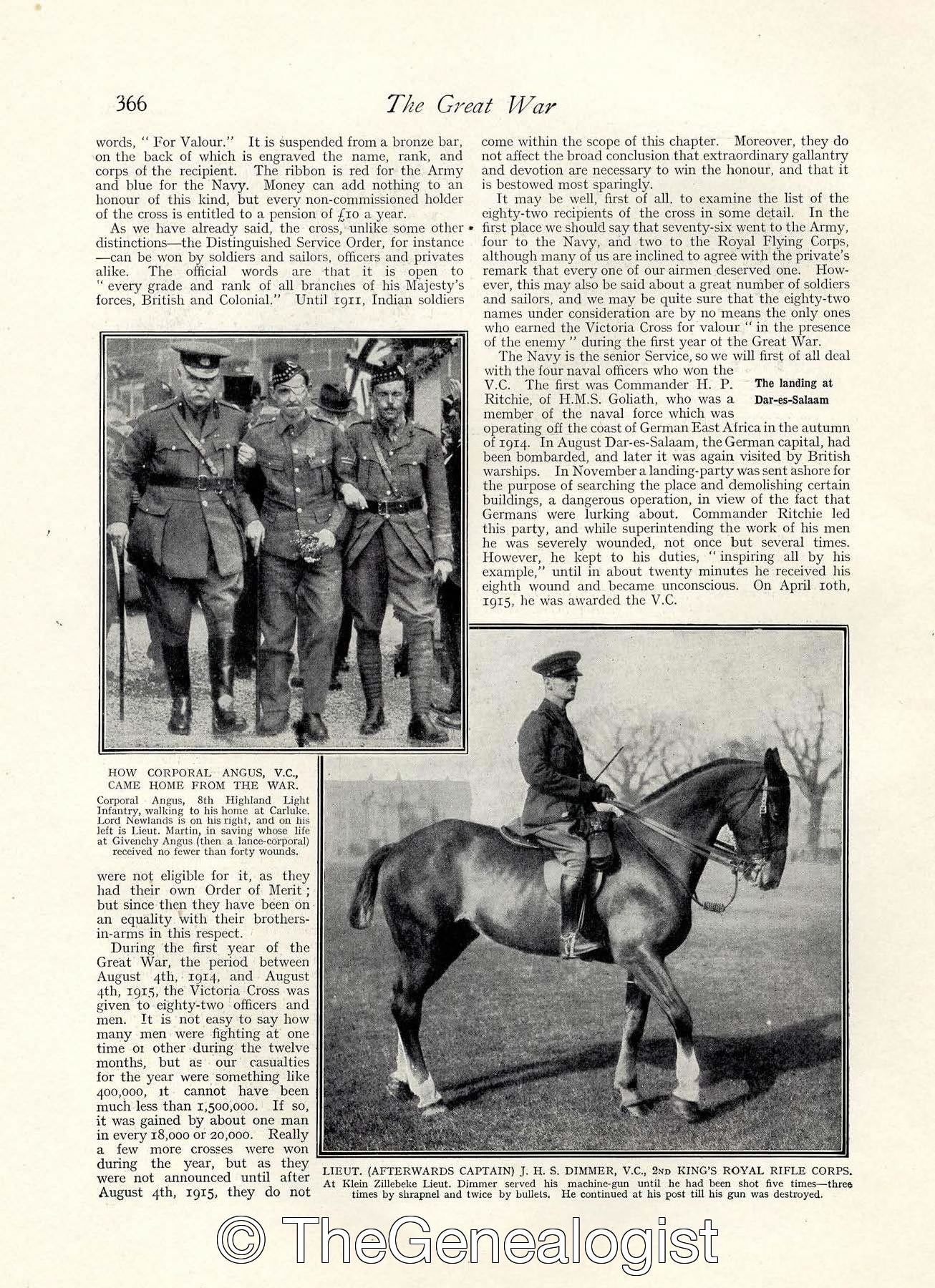 The Great War in Newspapers and Magazines

A further search of TheGenealogist's Image Archive resource returns us a contemporary illustration of the moment his gun was put out of action – though it fails to show the terrible wounds he had received. 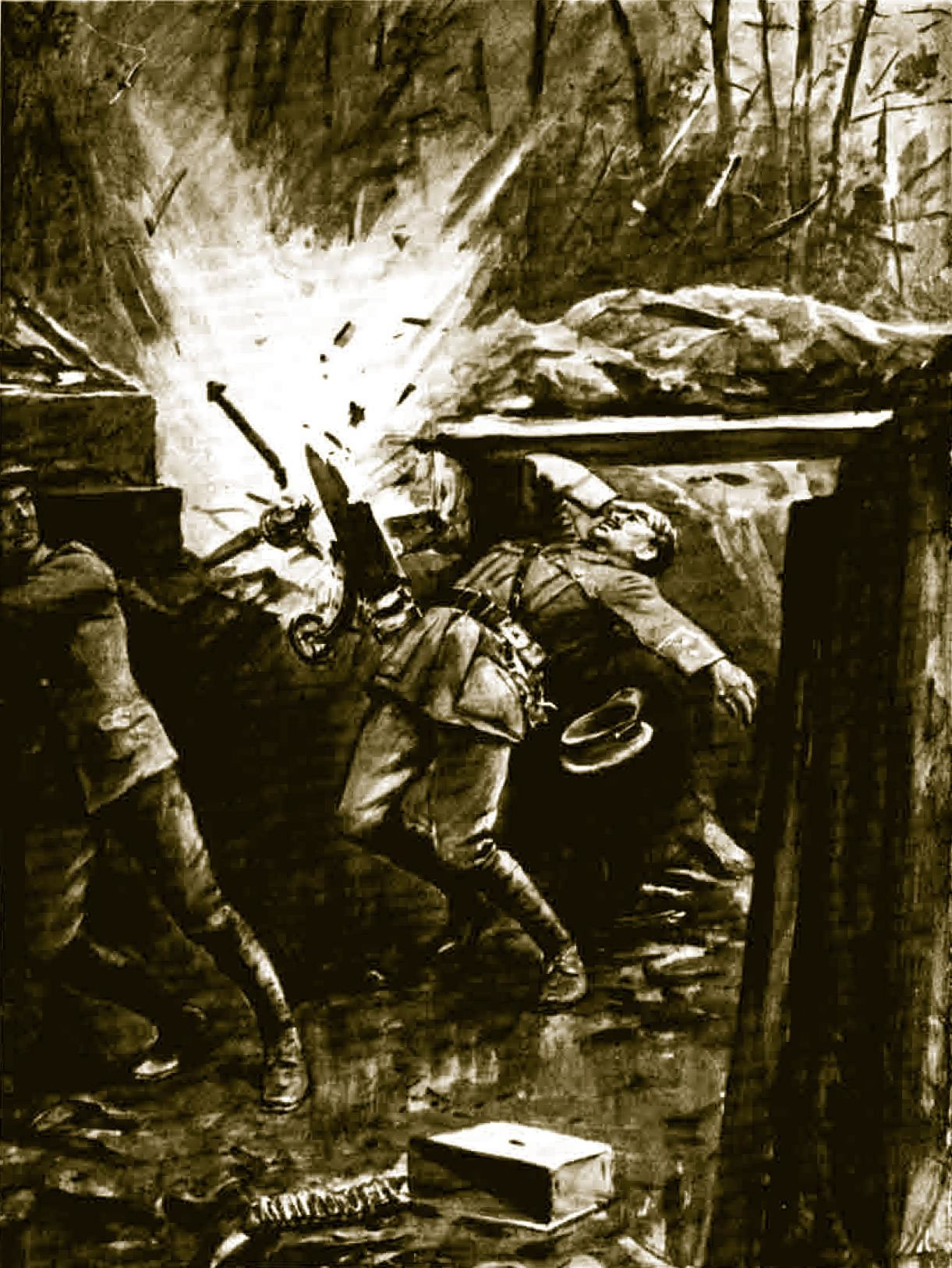 Unfortunately, for this son of Lambeth, he would not survive the conflict. We are able to find this out from looking at the casualty lists on TheGenealogist as well as the records of Soldiers who Died in the Great War. It was in April 1919 that the War Office Weekly Casualty List reported that he had been Killed. Acting Lieutenant Colonel John Henry Stephen Dimmer lost his life in action at Marteville, France on 21st March 1918 while leading a counter attack on horseback. Just two months earlier he had got married to Gladys Dora May nee Bayley-Parker. His death meant they had so little time together and no children from the union. 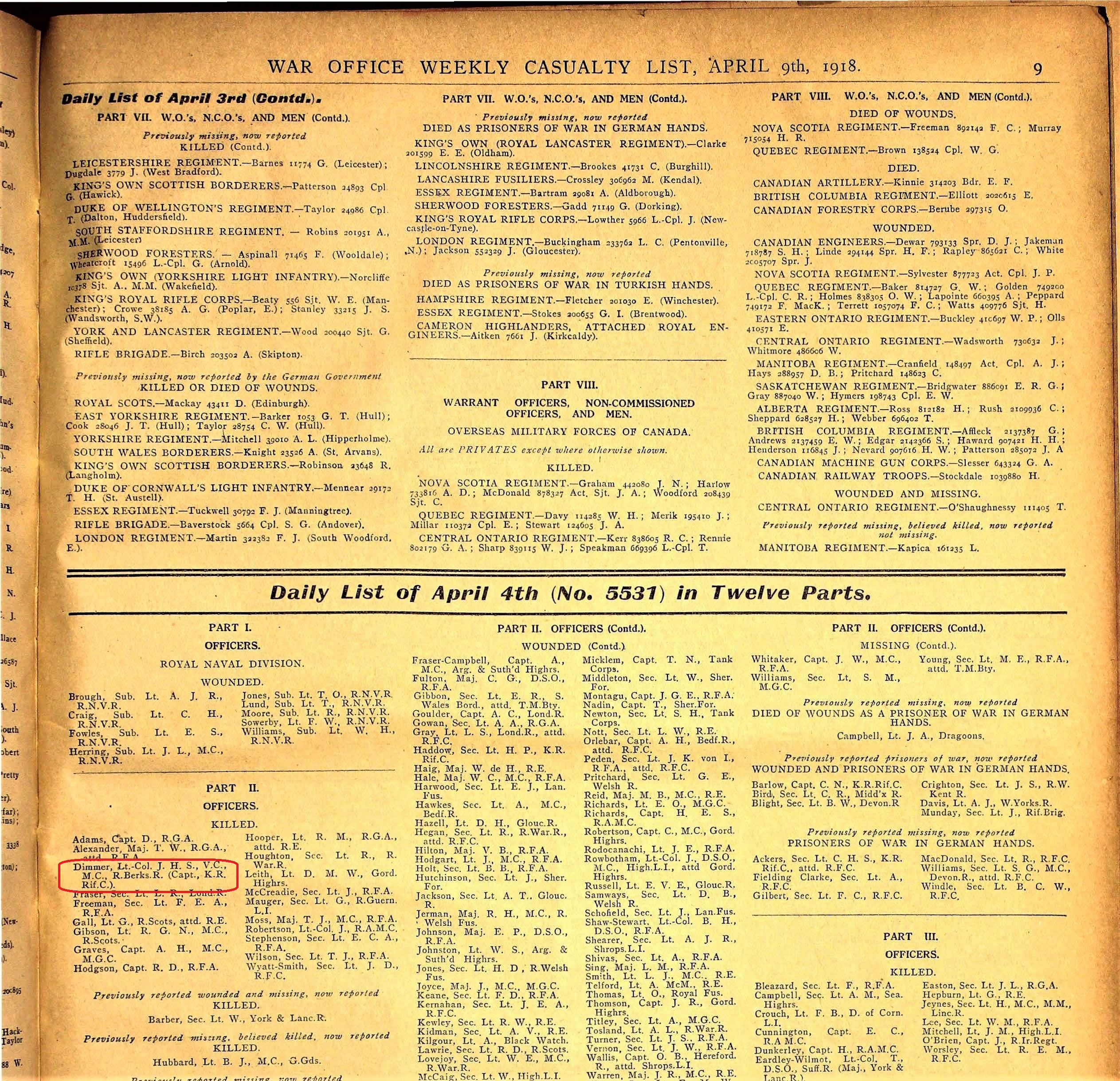 Casualty Lists can be searched on TheGenealogist

As the nation remembers its dead this November we can reflect on this warrior born in a street in Lambeth who went from private soldier to officer and along with all the other brave men who have died in conflicts since, sacrificed his life for his country.