Paddy Finucane was an Irishman born in Dublin in October 1920, though he moved to England with his parents in 1936. His mother was English, originally from Leicester, but his father was Irish having fought the British in the 1916 Easter Rising. Paddy was a nickname given to the young pilot by his colleagues, his real names were equally as Irish as his nickname: Brendan Eamonn Fergus Finucane. As he grew up he wanted to fly, so he applied to join the RAF and in August 1938 he was accepted for flight training as a pilot. He had left school with decent qualifications and originally went to work in an office as an accountant, a job he was said to have loathed. Then in 1937, the RAF had started to offer short-service commissions (SSC) to people who met their academic standards without any reference to their social background. The RAF offered a four-year term as a junior rank on squadron service with flying lessons and then a period of six years on the reserve list – an excellent proposition for a seventeen year old man who just wanted to fly.

For someone who would become a flying ace, a person who was credited with five or more enemy aircraft destroyed, he had a very shaky start to his flying career in the RAF. Brendan Finucane crash-landed on one occasion, during his training he nearly flew into an airfield boundary hedge, while another landing saw him burst a tyre on approach. Eventually, however, he completed his flight training and in June–July 1940 he began conversion training to fly the Supermarine Spitfire. On 13 July, the new fighter pilot was posted to No. 65 Squadron at RAF Hornchurch and thus began his short but illustrious war service. 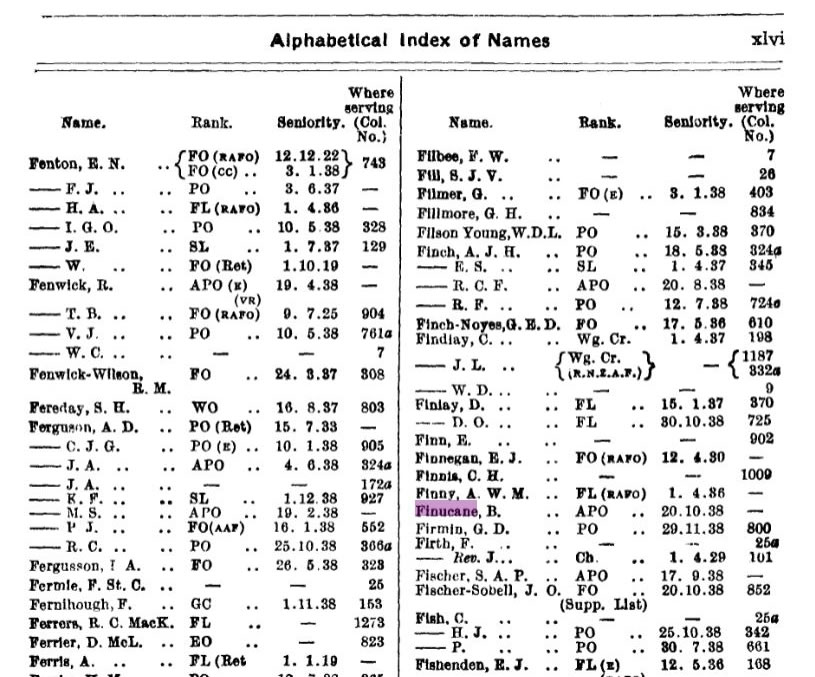 Using the Air Force Lists on TheGenealogist to trace this career we begin by selecting the RAF List for December 1938 where we can come across Brendan Fincane as an Acting Pilot Officer in the General List. This gives us his posting date of 29th October in that year. By then searching for him in the Alphabetical Index of Names section of the same edition we can see that he officially attained that rank a few days earlier; the Air Force List noting his seniority running from 20.10.38. Looking at later Air Force Lists we can see from the January 1942 edition that he had established himself as a top pilot as he now sports the designation D.S.O., D.F.C. after his name having been awarded the Distinguished Service Order and the Distinguished Flying Cross. By the middle of that year he would become Wing Commander Brendan Eamonn Fergus Finucane, DSO, DFC & Two Bars, reputedly the youngest man to hold that rank in the R.A.F. Sadly, by the middle of July in the same year, he had been reported missing and so does not appear in the next year's Air Force List.

It was on 15 July 1942 that W/Cdr Finucane took off with his flight for a mission over France. His Spitfire was damaged by ground-fire and so he attempted to fly back to England across the English Channel, but was forced to ditch into the sea and subsequently vanished. To find out more we can turn to the Operations Record Books for his squadron at this time. This fantastic resource on TheGenealogist reads like a daily journal, with what a unit did in war and peace. For that reason it is invaluable for researching your RAF ancestors. In the entry for 15th July in the ORB records of No 81 Squadron we can get an inkling of how the loss affected his colleagues:

"We suffered a heavy loss today, W/Cdr. B. Finucane's machine was hit landing on the sea about 10 miles West of the French coast. His machine sank immediately and no further trace was seen of him. It is surmised he must have been stunned on impact with the water. He will be greatly missed by No. 81 Squadron with whom he was very popular, spending a considerable time at our Dispersals. It is a very heavy blow to lose so brilliant a fighter pilot at the early age of 21."

The next day, 16th July, the entry simply read: "Weather poor. Some flying training during the day. The Squadron appear very depresses (sic) over the death of W/Cdr. B. Finucane." 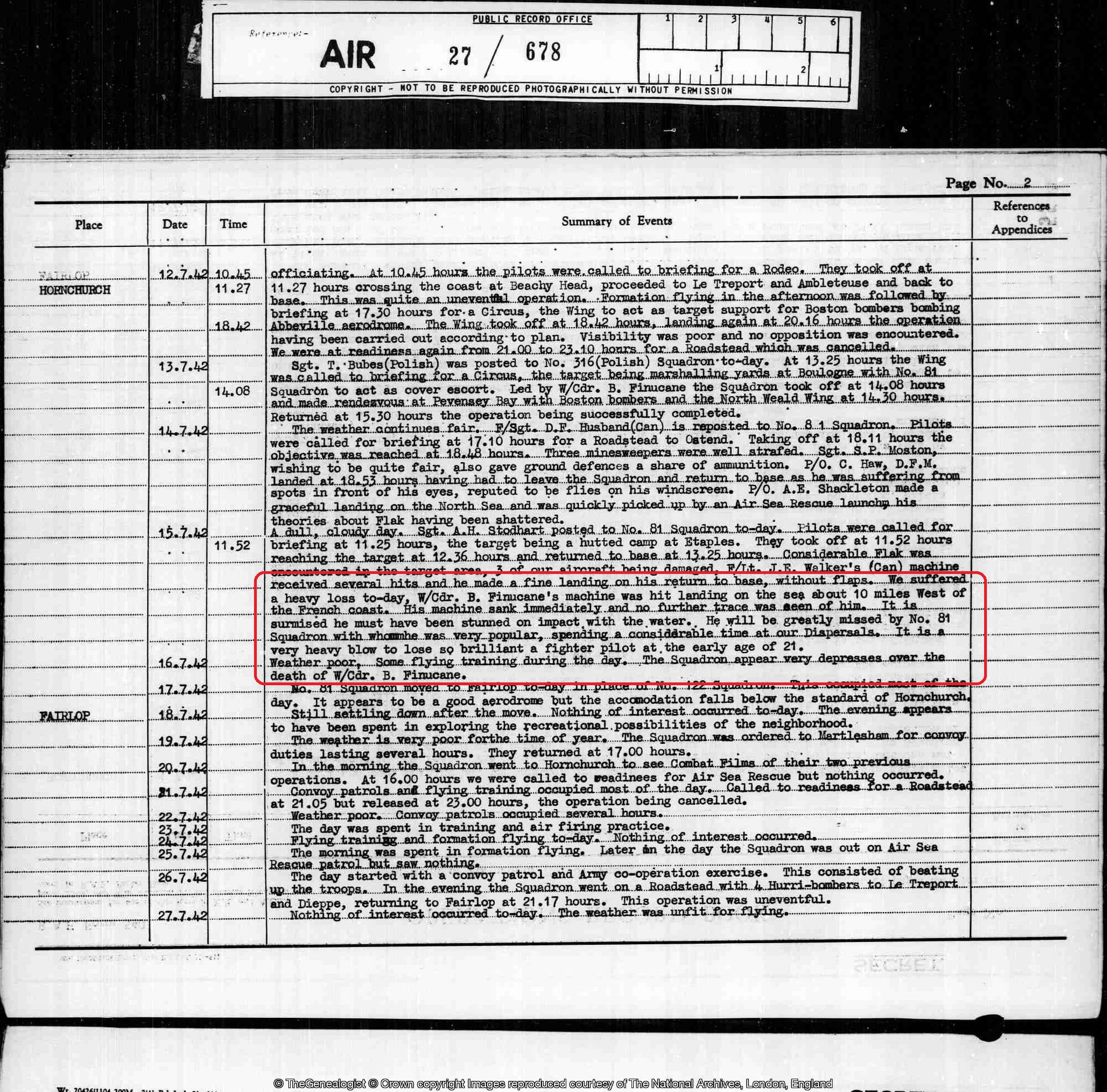 A set of records that are often overlooked by family history researchers are those of the General Register Office (GRO) WW2 Deaths records. Similar to the regular GRO BMD Index these records list soldiers, sailors and airmen killed in the Second World War. In the case of RAF deaths we are given the rank, service number, squadron as well as the volume and page number required for ordering the certificate from the GRO.

Paddy Finucane has no grave, but he is commemorated on the Air Forces Memorial to the Missing of World War II at Runnymede. This memorial in Englefield Green, near Egham, Surrey, England is a memorial dedicated to some 20,456 men and women from air forces of the British Empire who were lost in air and other operations during World War II. The memorial is one of many that can be found on TheGenealogist from Britain and across the world. 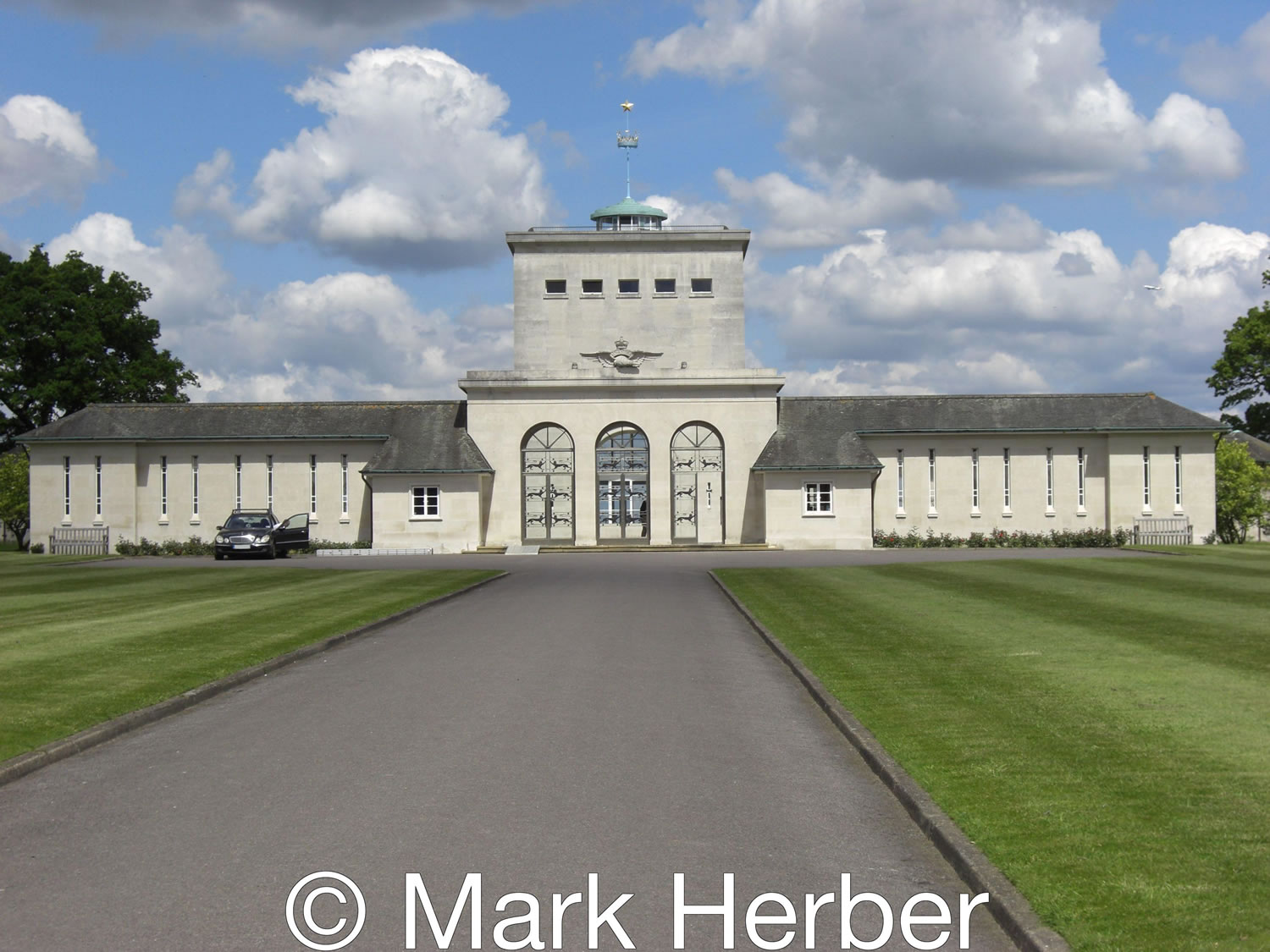 The Air Forces Memorial, or Runnymede Memorial, in Englefield Green, near Egham, Surrey. 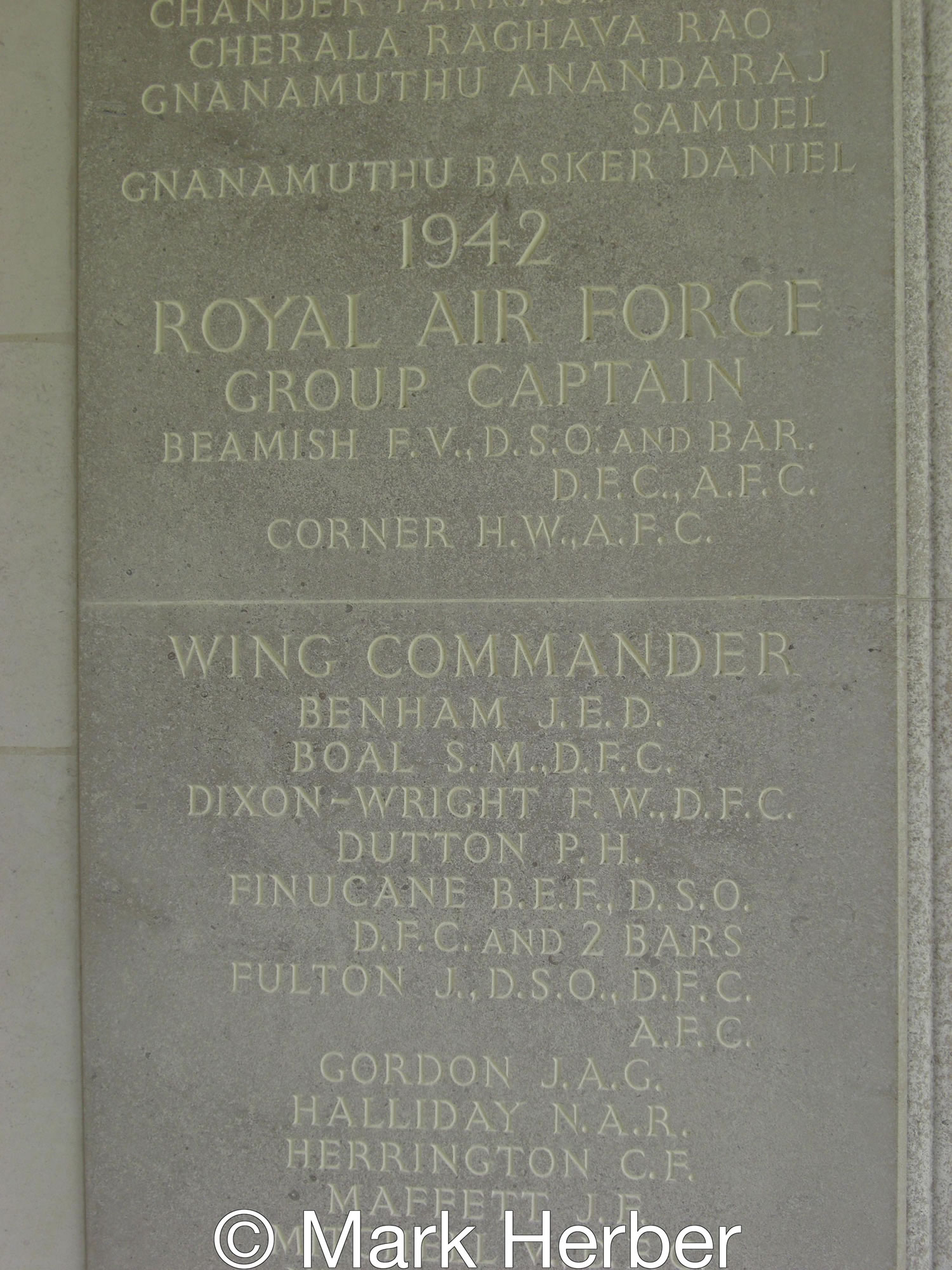 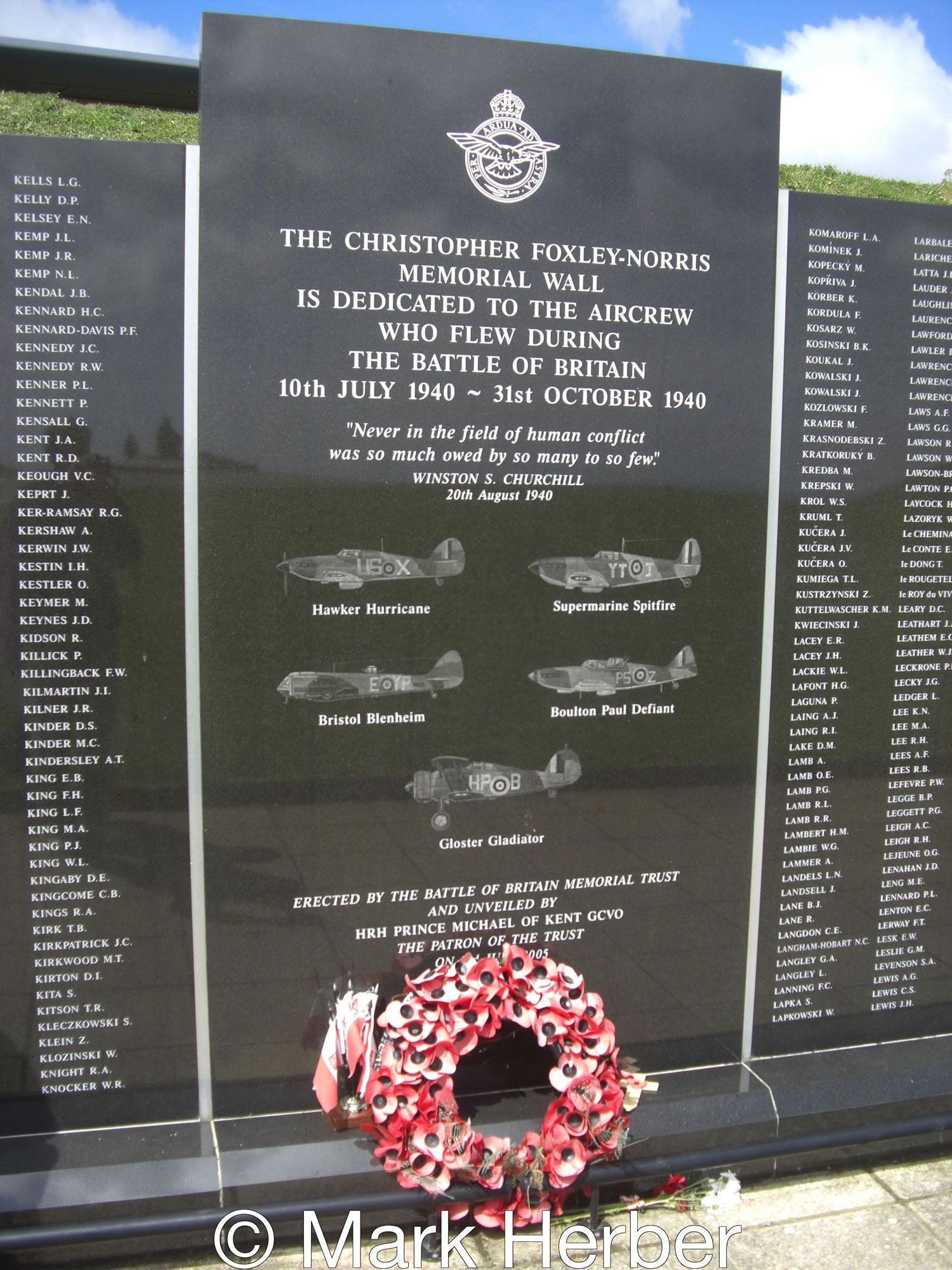 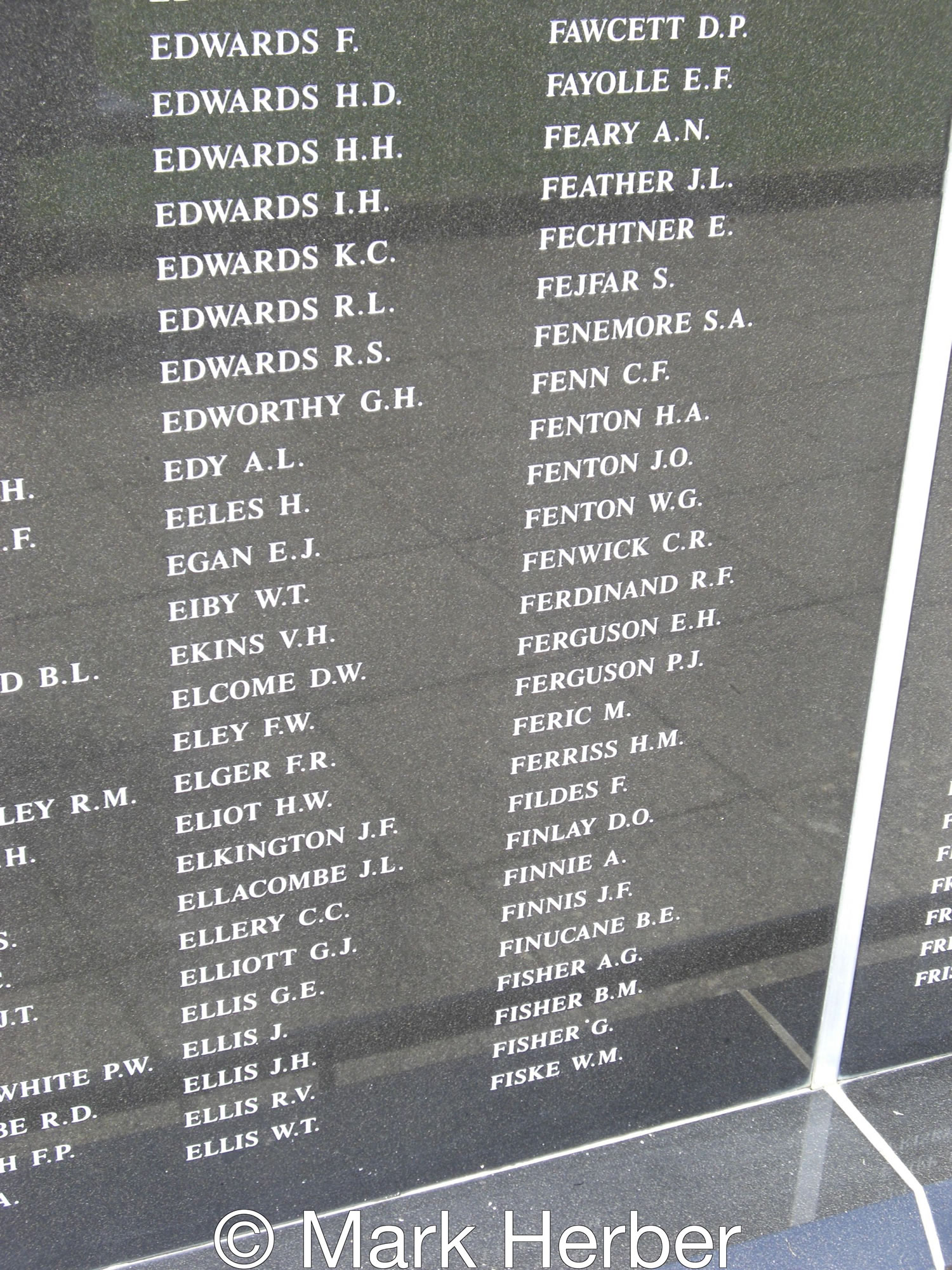 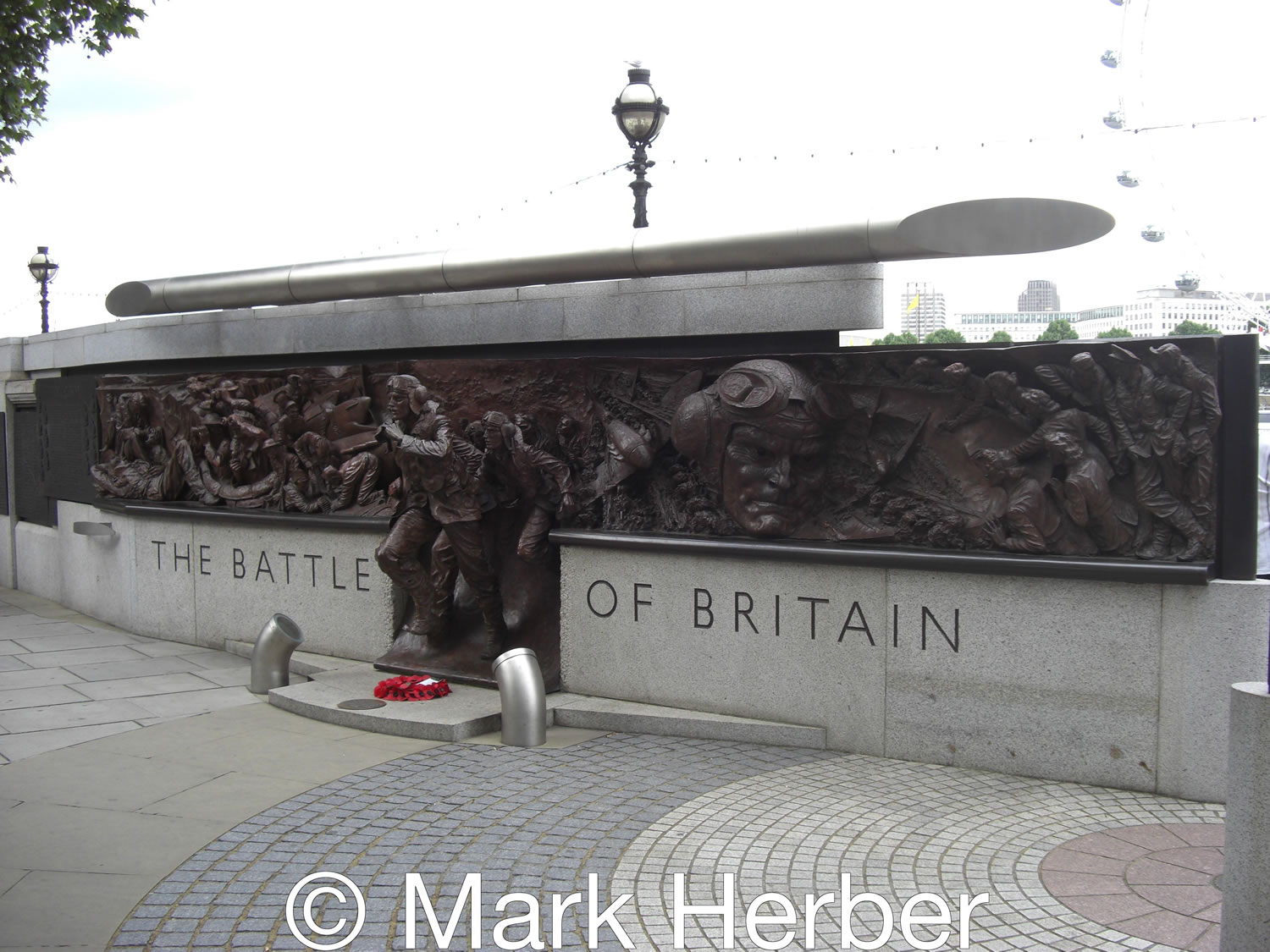 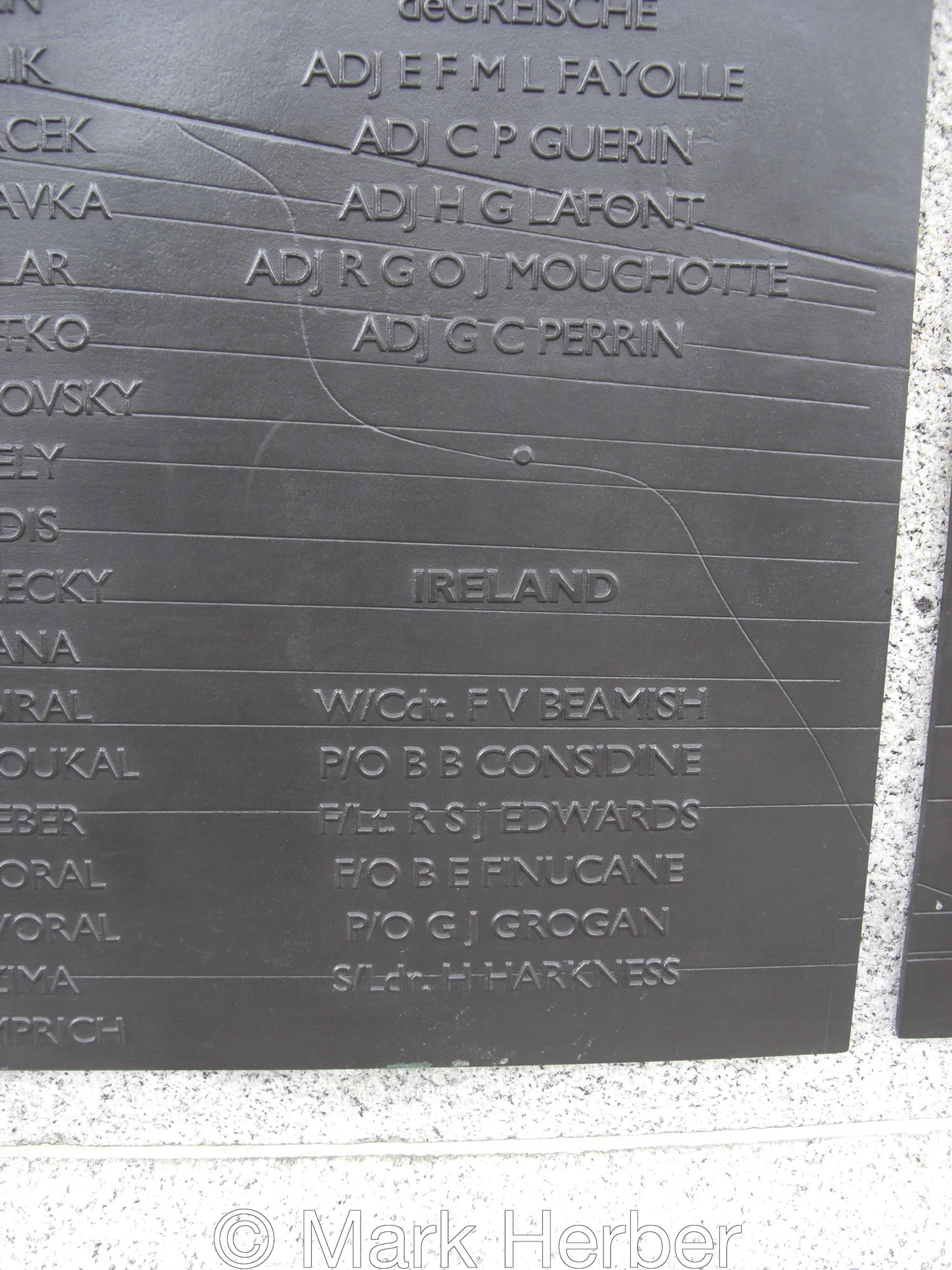 Battle of Britain Memorial, on the Victoria Embankment in Westminster, London on TheGenealogist

Finucane's war time tally credits him with 28 aerial victories, five probably destroyed, six shared destroyed, one shared probable victory, and eight damaged. The various enemy aircraft that he shot down included 23 Messerschmitt Bf 109s, four Focke-Wulf Fw 190s and one Messerschmitt Bf 110. Official records differ over the exact total that he achieved. After the war, two of Finucane's victories that were credited previously as "probables" had, in fact, been destroyed, but they were not officially included in his tally. Some even say that the young Irish Wing Commander's total victory count could even be as high as 32 victories.

If we want to get an idea of what he and countless other pilots were looking out for every time they went up in the air in those times, then we can now turn to a contemporary resource that has been made available on TheGenealogist in the Reference Books section. It is the Aircraft Recognition Book originally published by The Aeroplane from 1939. 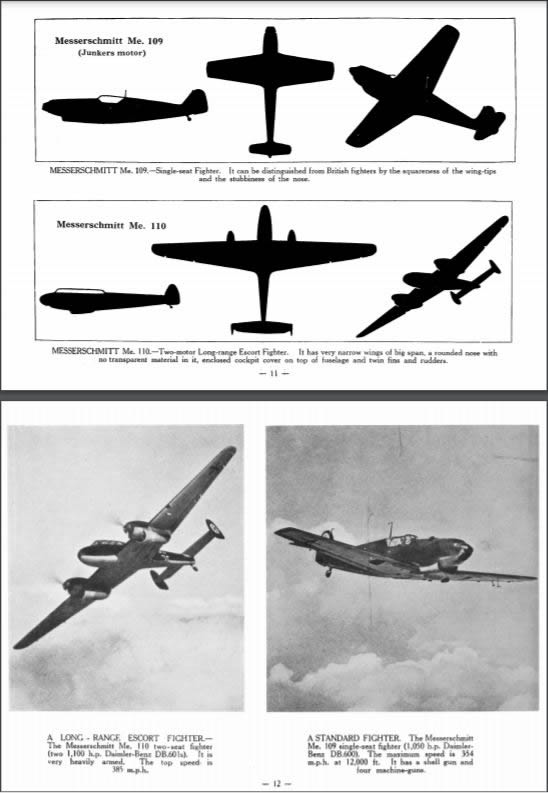 With Air Force Lists, ORBs, War Death records and War Memorials, tracing an ancestor who fought in the air force using TheGenealogist can be very enlightening. It can make you very proud of the sacrifice that these individuals made, if also a little sad at how their lives were cut short. In this article we have seen how Paddy Finucane lost his life at only 21 after demonstrating his skill in a plane and becoming the youngest Wing Commander the R.A.F. has ever seen.