The Headstone Collection on TheGenealogist allows researchers to search for ancestors' details as recorded by their family on the monuments erected to their memory. From simple stones, just inscribed with names and dates, to grander marble memorials commemorating the deeds of those who died centuries ago, these gravestones and tablets can be a fascinating way to learn more about a family. TheGenealogist has transcribed the details from the headstones and memorials so that family historians can easily search for ancestors as well as see images captured of the stone or plaque.

In the Wiltshire Parish of St Peter, Stourton we are able to find examples of both the owners of Stourhead, the banking family who founded Hoares Bank, as well as the Stourton family (sometimes written as Stowrton) who had from the mid-fifteenth century been previous landowners of the manor having lived in a long demolished country house replaced by the Hoares in the 18th century. Stourhead is a Grade 1 listed Palladian mansion house and estate that was created and developed over seven generations by the Hoare family and which is now a National Trust property. 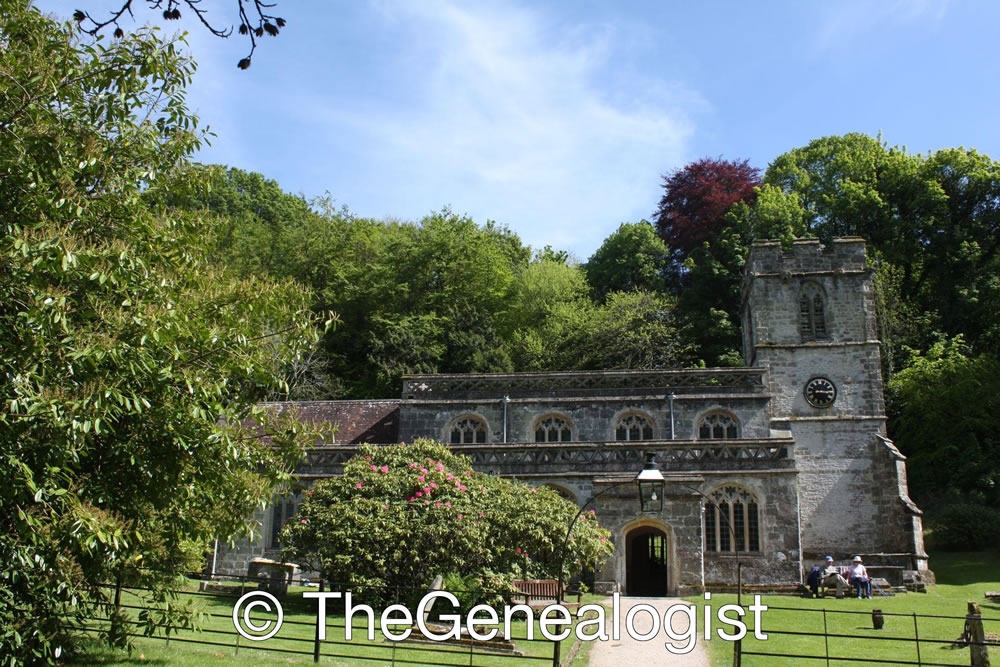 Stourhead House had been built between 1721 and 1725 to the design of pioneering Scottish architect Colen Campbell for Henry Hoare I (1677-1725) the son of the founder of the private bank that trades to this day under their surname in the City of London. Henry Hoare had no time to enjoy his new house as he died in 1724 according to the Parish Records Burials on TheGenealogist, and the house was not completed until 1725. 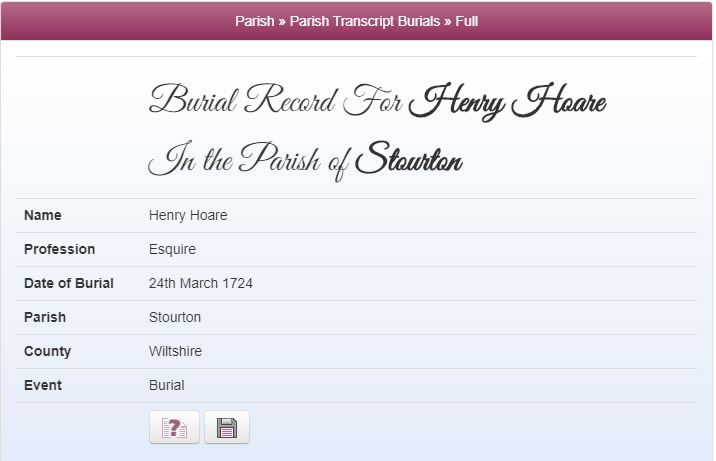 It was his son, Henry Hoare II (1705-1785) who, according to the National Trust website was known as 'Henry the Magnificent', would furnish Stourhead house with paintings and sculpture, much of which remains today. He is also credited with creating Stourhead's iconic landscape garden, with its lake, temples and monuments. In the memorials to be found inside St Peter's Church, Stourton we are able to see a fine white monument to him noting that he was 80 years old at the time that he died. 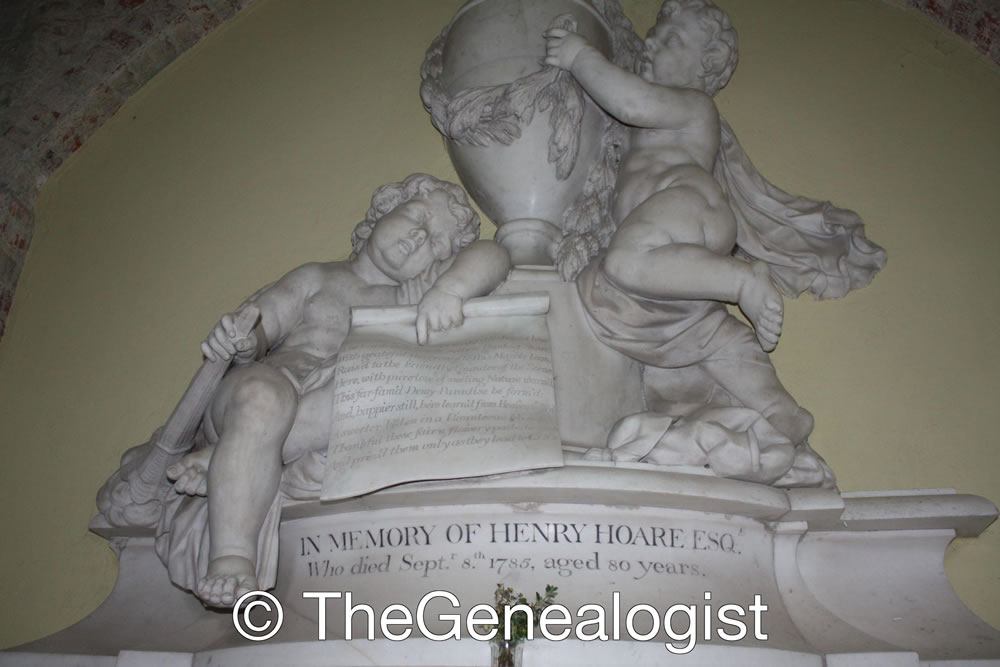 Henry was a partner in the bank for nearly 60 years and his nickname "The Magnificent" derived from his generosity as a patron of the arts and his expenditure on Stourhead and its estate. In the City it was under his guidance that the family's bank introduced many innovations, including printed cheques.

The gardens at Stourhead, were planned and planted under Henry's ownership to become famed for their beauty and admired by many. In 1734 he was elected Member of Parliament for Salisbury and on his death in 1785 he left Stourhead to his grandson Richard Colt Hoare, the son of his daughter Ann Hoare(1734–1759). 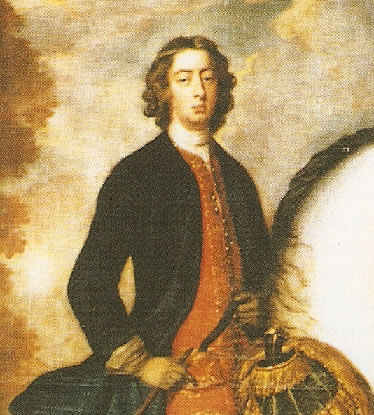 The image from a monument in the church allows us to understand how it was that Richard Colt Hoare was to inherit Stourhead. Henry 'The Magnificent' had lost his first wife and the daughter of this marriage and then married Susan the heiress of Stephen Colt. With his second marriage the memorial tells us that he had three sons and two daughters. Information carved into this plaque tells us that the sons predeceased him and so it was the child of his daughter Anne, who inherited. The information that she had married Richard Hoare of Barn Elms in Surrey allows us to then turn to other records to see why Anne's maiden name and married name had been the same. Her husband can be found to be the son of Sir Richard Hoare, Lord Mayor of London. Sir Richard, it transpires, was also the brother of Henry 'The Magnificent' and so this made the heir to Stourhead, Richard Colt Hoare, not only the grandson of Henry 'The Magnificent' but also his great nephew! 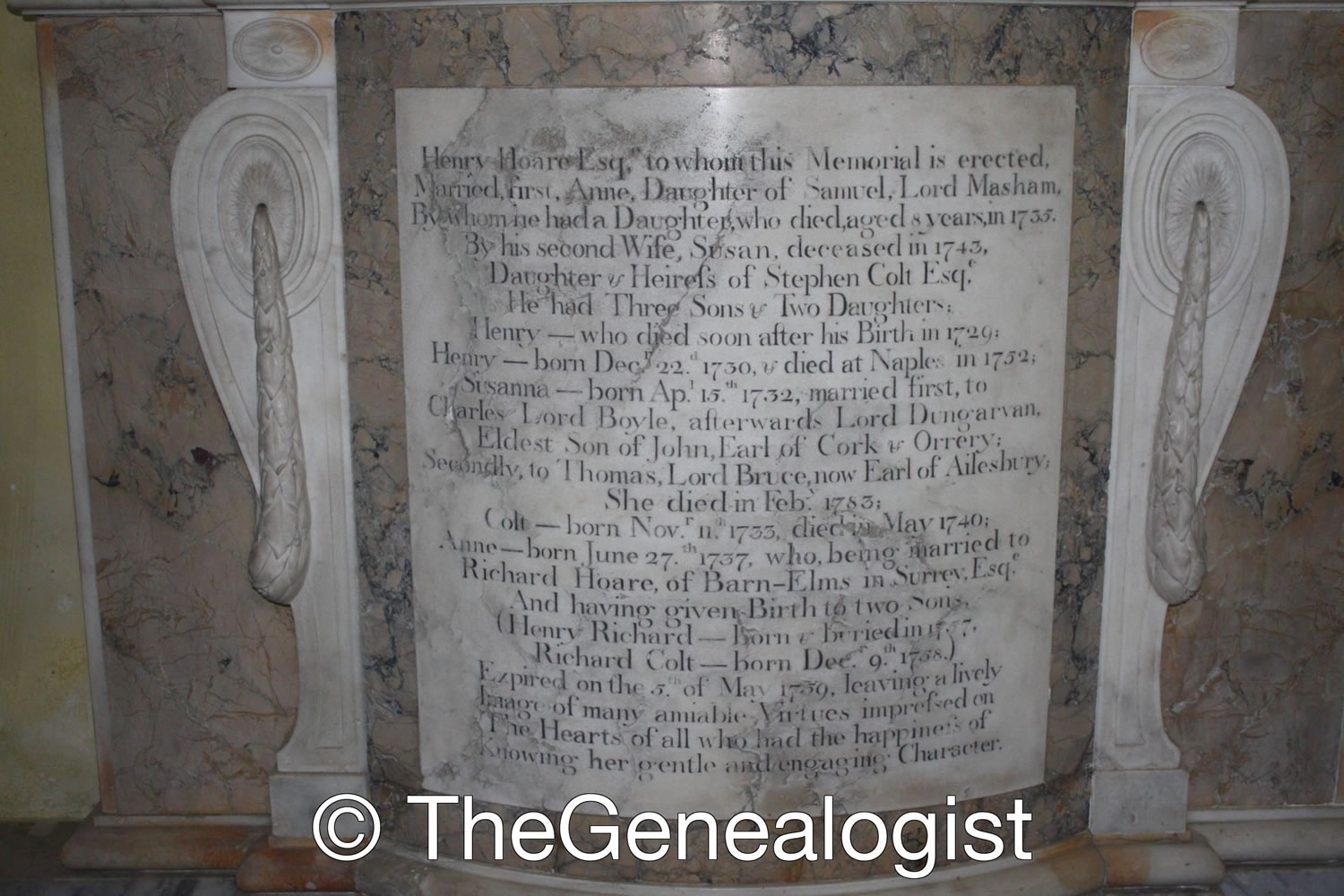 Before the building of Stourhead there had previously stood an aristocratic family's manor house known as Stourton Castle on the land on which the new house was eventually built. This had been the home of the Barons of Stourton for 500 years even before they constructed Stourton Castle. Through bad luck over the years they had become impoverished and had sold the manor by 1714. When the Hoares bought the manor and lands a few years later in 1717 they had the old house demolished and cleared. This was done so completely that exactly where it had stood is not known even to this day. The National Trust have undertaken various attempts to find traces of Stourton Castle in the grounds that they now own, but have still not conclusively found it.

In the Headstone collection on TheGenealogist we can find several examples of the Stourton family (sometimes written as Stowrton) who had once called this their home. One of the better preserved from the 1600s is for Mary, Lady Weld who died 15 May 1630 and had been the wife of Sir John Weld and the eldest daughter of William, Lord Stowrton. This appears to refer to Willim the 11th Baron Stourton and to her husband Sir John Weld a Member of Parliament who came from a City of London merchant family.

The Stourtons in 1644 were Royalists and suffered an attack by parliamentary forces that then rendered their house uninhabitable and it is very likely that it was derelict at the time that the Hoares bought it in the eighteenth century. 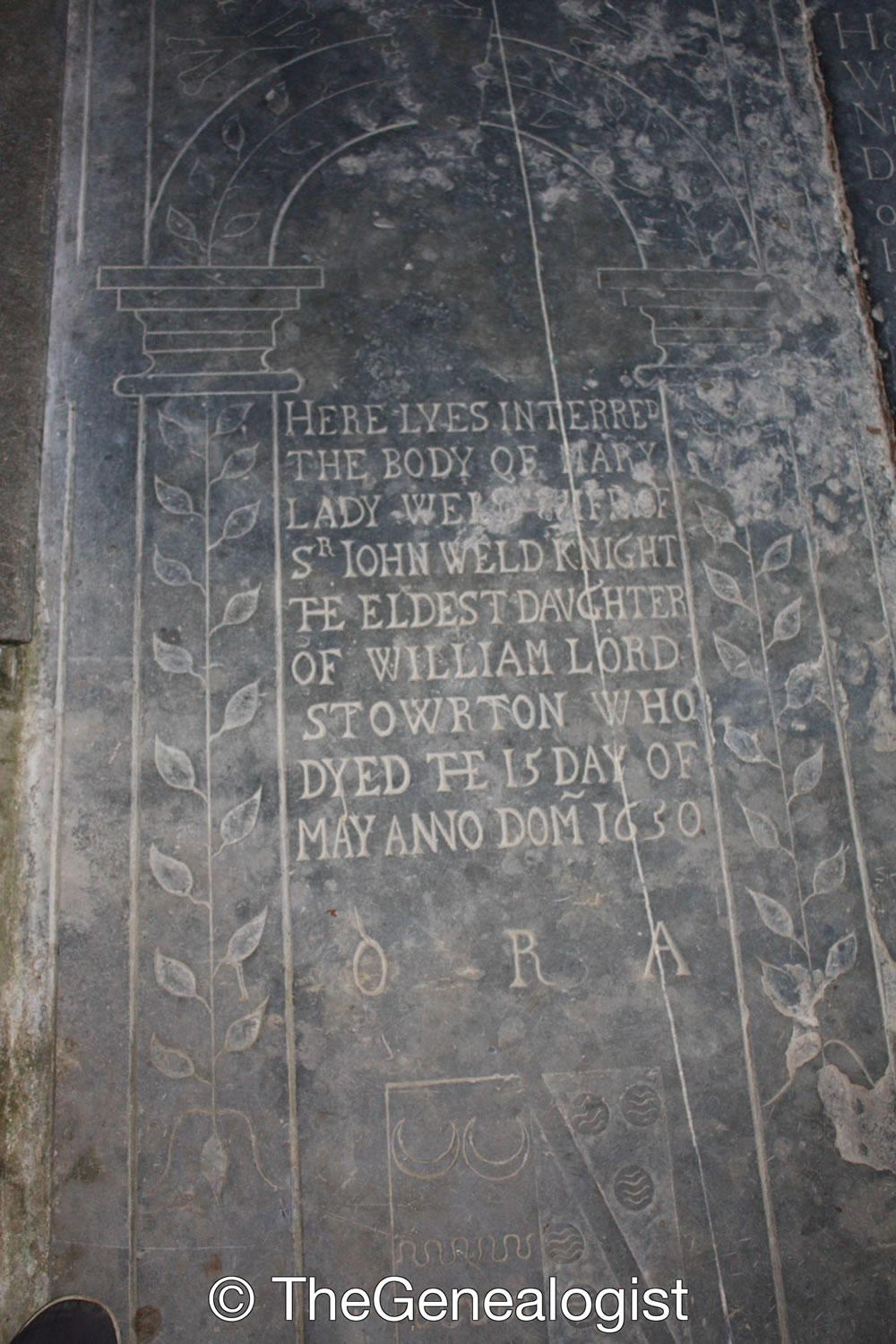 Gifted to the National Trust

The last of the Hoare family to own the land and Stourhead House, Sir Henry Hugh Arthur Hoare, gave the house and gardens to the National Trust in 1946, one year before his and his wife's death. From the tablet in the church of St Peter we can see that both he and Lady Hoare died on the very same day in March 1947. His son and sole heir, Captain Henry Colt Arthur "Harry" Hoare, of the Queen's Own Dorset Yeomanry, had already died of wounds received at the Battle of Mughar Ridge on 13 November 1917 during World War I and so this was the backdrop to why the house and land was given to the National Trust. 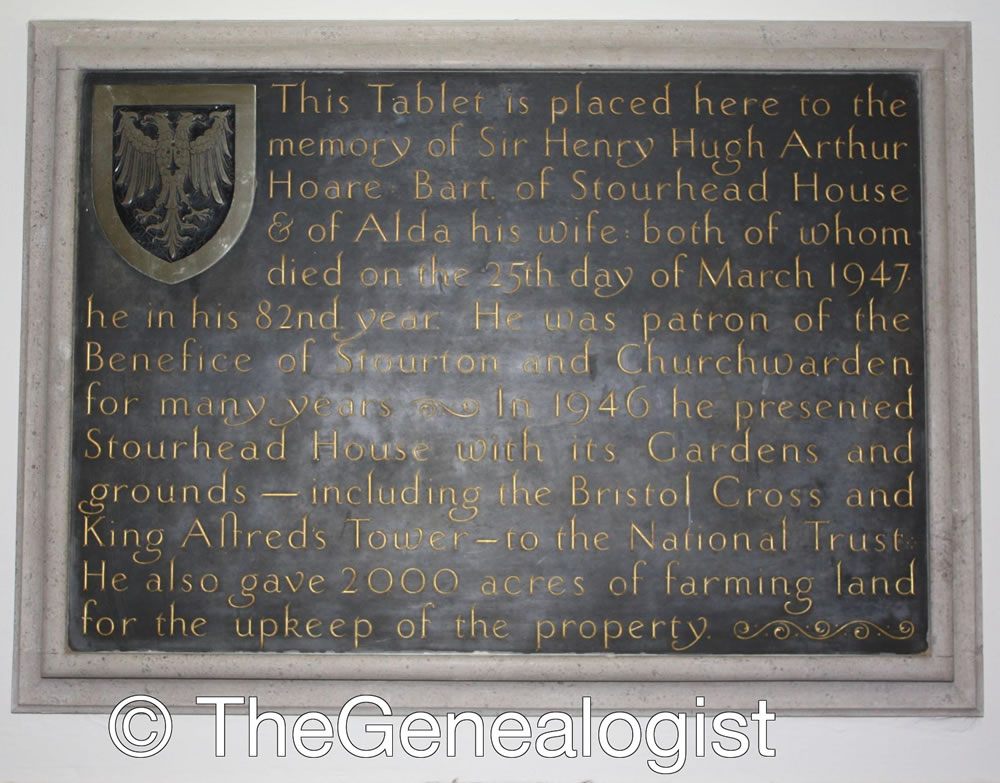 The last of the Hoares of Stourhead commemorated on a tablet inside the church of St Peter, Stourton

Inside the church there is even a plaque to one of the servants of the Hoare family, a Robert Davis and his wife who died in 1835 and 1783 respectively. Thus it is not only the top echelons of society who are remembered in these records. 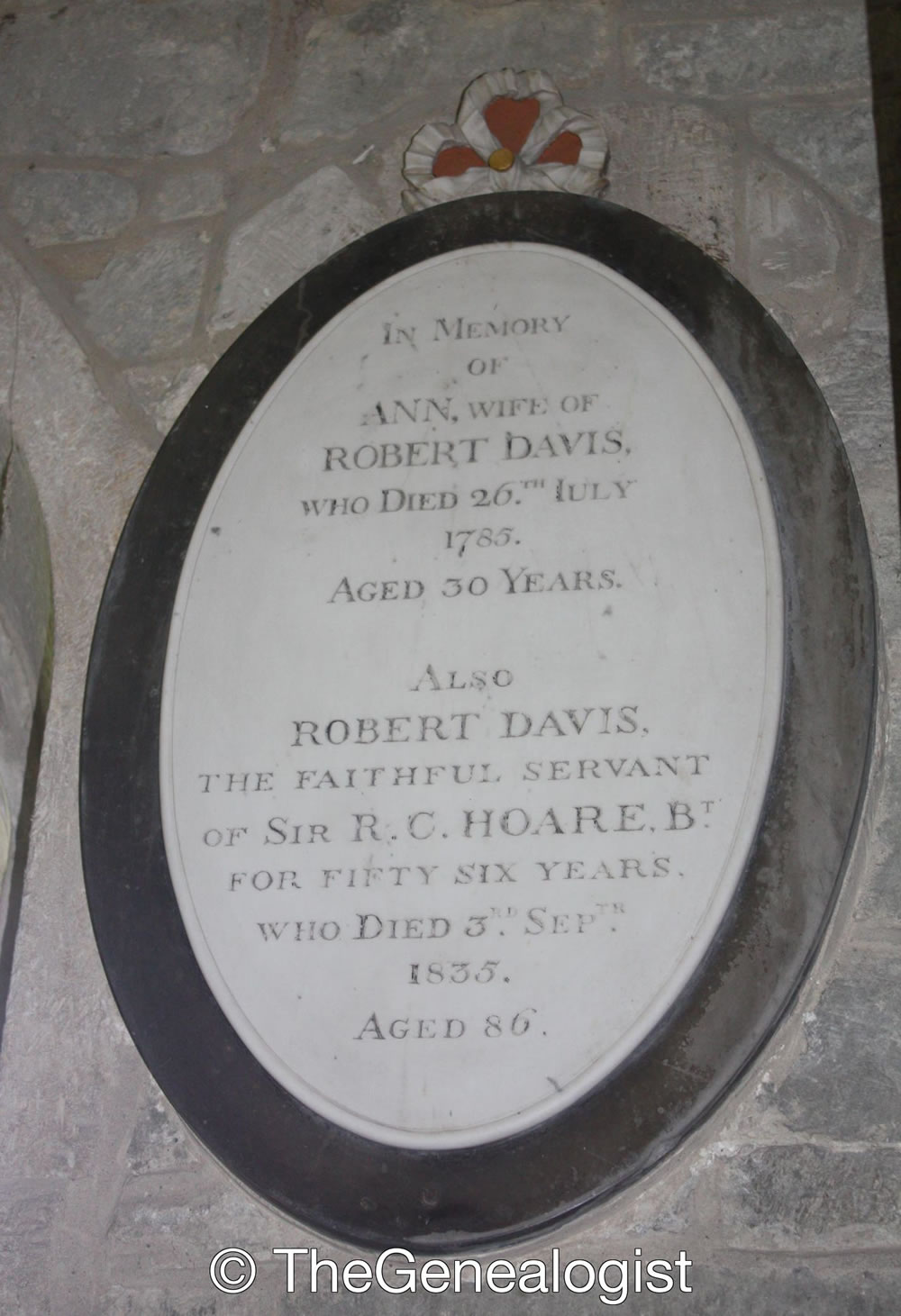 A memorial to Robert Davis and his wife

These records in TheGenealogist's Headstone Collection can very often be used to discover so much more than just names and dates of ancestors and can often be the starting point to further investigation elsewhere when the headstone or memorial plaque reveals a nugget of information not recorded in other death records.