A snapshot of houses, hotels and shops in Kingston upon Thames from before the First World War...

Kingston upon Thames is a bustling market town formerly in the county of Surrey and since 1965 a Royal Borough within Greater London. In its past it had been a manor and an ecclesiastical parish and its very name, Kingston, is derived from "the king's manor or estate" from the Old English words cyning and tun (A. D. Mills in the Dictionary of London Place Names, Oxford University Press). Kingston belonged to the king in Saxon times and was the earliest royal borough. 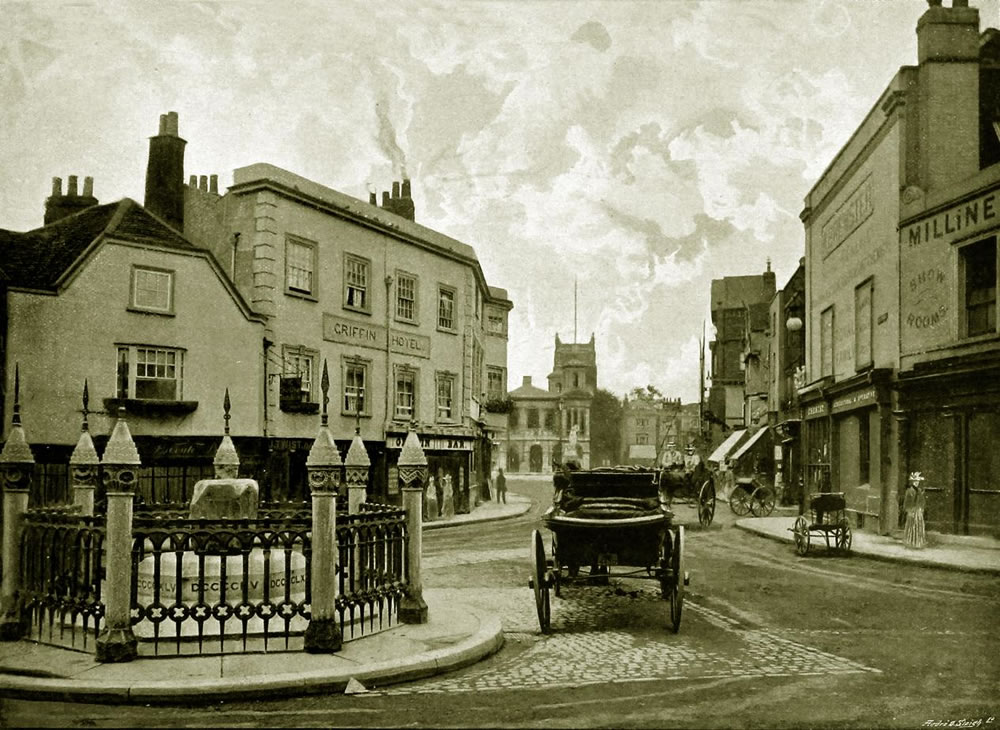 An old picture from TheGenealogist's Image Archive shows us the Coronation Stone set in the middle of the road at the Market Place. It is an ancient sarsen stone block which is believed to have been used in the coronation of seven Anglo-Saxon kings. Presently located next to the Guildhall in Kingston upon Thames, there have been plans to move it back to its original location in the parish church of All Saints.

In the background of the historical image of the coronation stone we can see the Griffin Hotel. This establishment also appears in a search of the Lloyd George Domesday records when it was owned at this time by the Hodgson's Kingston Brewery Company Ltd and occupied by landlady Mrs A Wade. This example shows how searching for ancestors who may have owned or occupied property in Kingston just prior to the outbreak of WWI, or tracing house histories, has become simpler with the release of these Lloyd George Domesday Survey records and maps in TheGenealogist's Map Explorer™.

The road into Kingston upon Thames from Wandsworth in the east, and which skirts the beautiful Richmond Park, is known as the A3 until it branches off at Kingston Vale. Following the A308 from that junction into Kingston itself takes the traveller down the Kingston Hill and past the house that was once the property of a very famous speed-king and his equally famous son. Between them Sir Malcom and Donald Campbell set 10 speed records on land and 11 on water from 1924 until 1967 with Donald's untimely death in a water speed attempt. 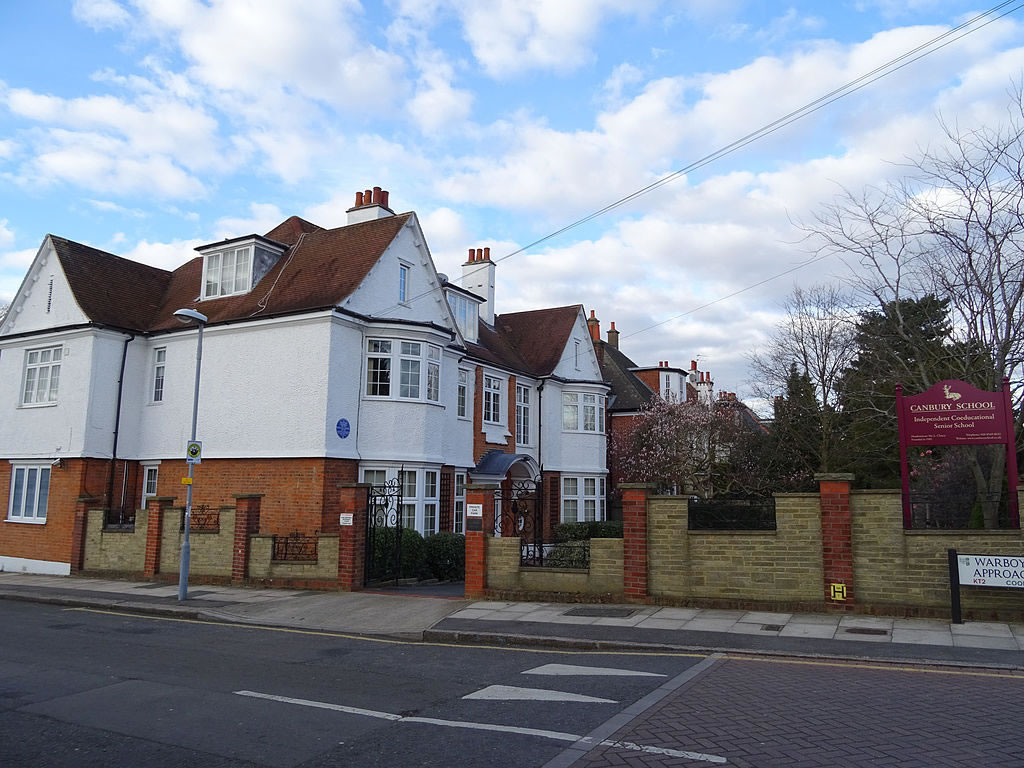 In 1919 Malcolm Campbell (later Sir Malcom Campbell) a motoring journalist, racer and former RFC pilot, moved to Canbury, Kingston Hill, in Kingston-upon-Thames. The property was a substantial two-storey detached house dating from the late 19th century and which in modern times has become a private school. At the time of the Lloyd George Domesday survey on the 16th May 1914, plot 2485 was then occupied by a Dr William Henry Roots as a tenant. From the records we can see that the house's ownership was split between three members of the Garle family and a Mr Longsdon.

The surveyor has also provided a sketch of the footprint at the time on one of the pages of the field book. Notably, from this, the property is bordered by roads that had yet to be named as he refers to both of them as New Road. On the accompanying Lloyd George Domesday Survey map, however, Warboys Approach and Warboys Road has then been penciled in after the roads were given their names. 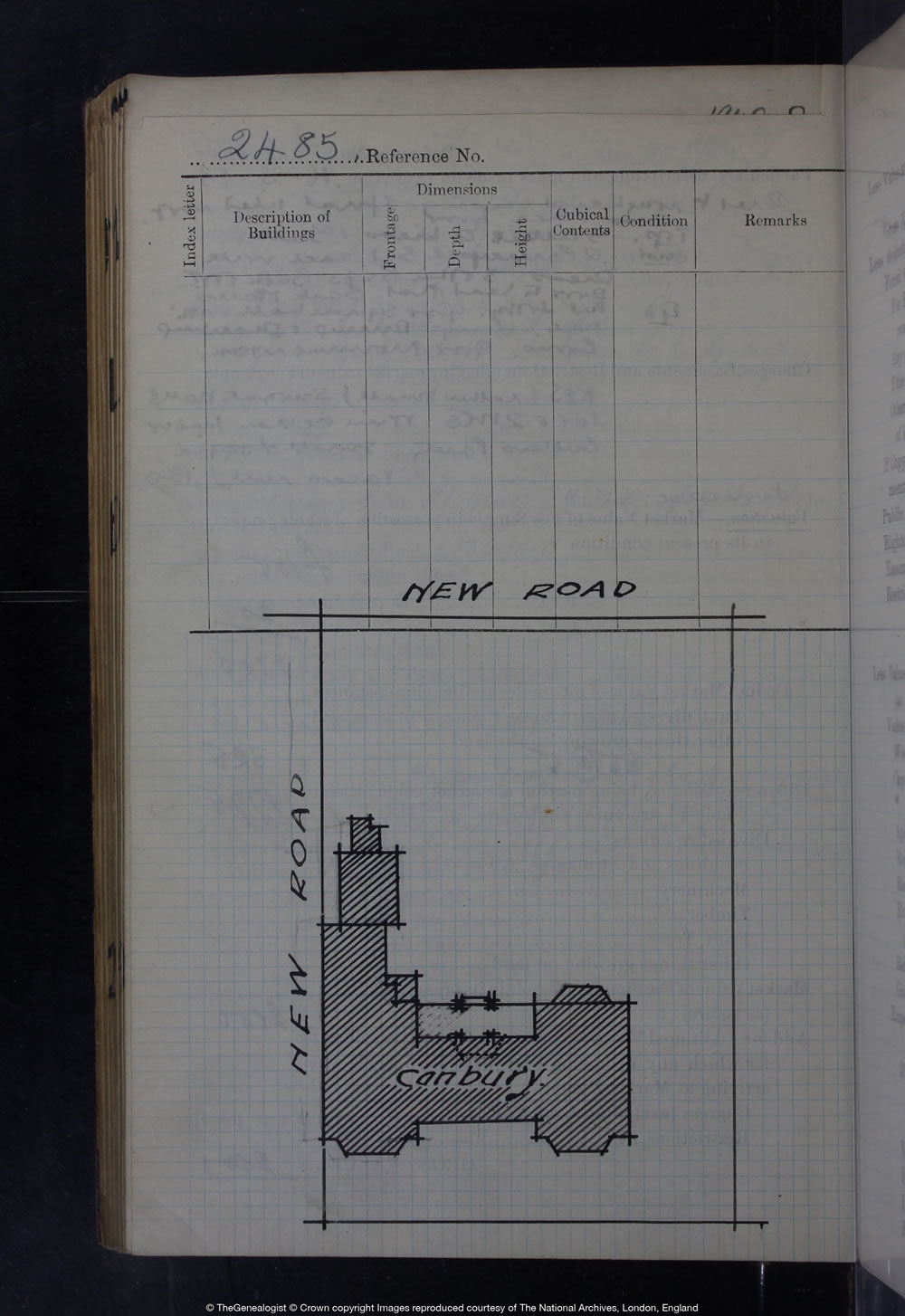 Plot 2485 on Kingston Hill, the home of Sir Malcom Campbell and birthplace of Donald Campbell in 1921

Major Campbell moved into this house in 1919 and married Dorothy Whittall a year later. It was here in this house that their son, Donald, was born in March 1921 and he would continue the family tradition of racing cars and boats all famously named Blue Bird.

Today their former house sports a blue plaque in their memory that was erected by English Heritage whose website recounts that Sir Malcom had the tendency to get into casual road races with other drivers when returning to this home from his office in London. They recount that "such was his competitive spirit that he would sometimes drive past his front door and not give up the chase until he had reached Esher or beyond."

People who know the area well may draw your attention to the much loved Bentalls building formerly a department store and now a mall. Back in 1867, as the town drew people in the surrounding area to visit it for their shopping needs, Kingston was the choice of location for the establishment of a retail business that would grow from small roots into something very much bigger. This was the year that Frank Bentall bought a small drapery shop in the town, it is said he wanted to impress his fiancé's father. Bentall's drapery shop would then grow to become a major "county" department store with a listing on the London Stock Exchange until 2001 when it was bought by the private Fenwick group.

In 1935 Bentalls had put up an iconic building in the town to a design drawn by architect Maurice Webb, who was the son of the famous architect Sir Aston Webb responsible for the façade of Buckingham Palace and the Victoria and Albert Museum. Maurice Webb took his inspiration from Wren's design for Hampton Court. The attractive stonework on the façade was the work of the sculptor Eric Gill. Between the year it was opened and 1976 it was the UK's largest department store outside of central London. Notwithstanding that only the Bentalls façade remains wrapped around a modern shopping centre, it still became a Grade II listed building in 2011 for its restrained English Baroque design by the important architectural firm of Sir Aston Webb & Son and the fact that it is impressive and substantially complete. This exterior has been retained as part of the modern Bentall Centre shopping development that was opened in 1992 and in which the principal Bentalls store now has its home. 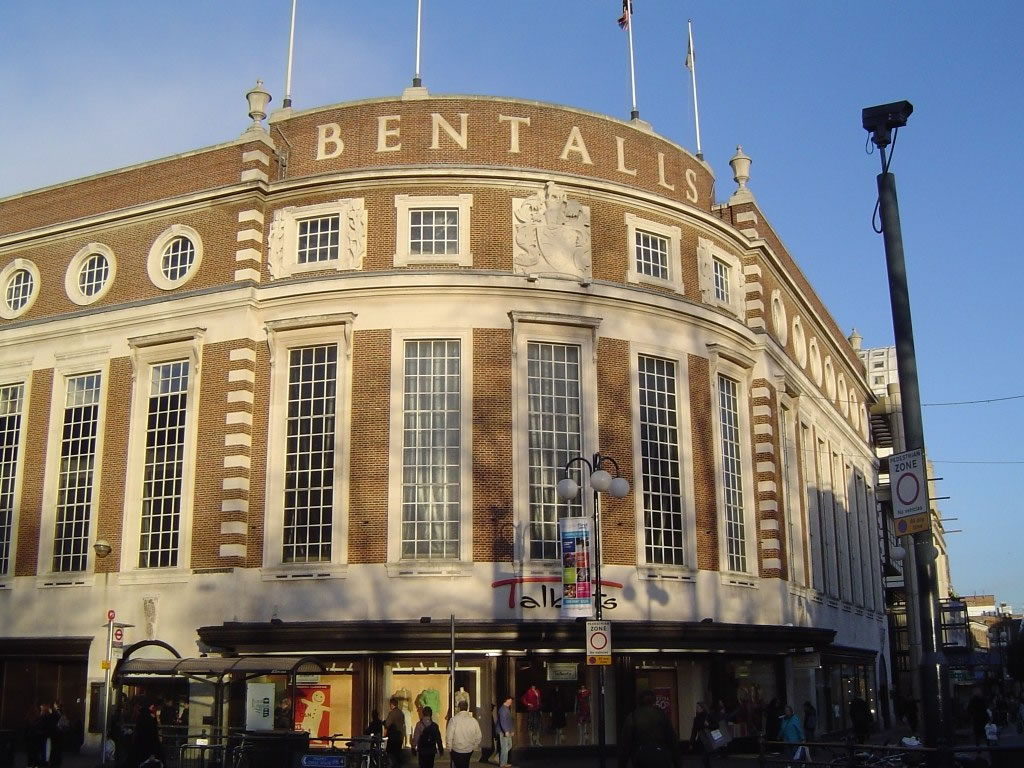 At the time of the Lloyd George Domesday Survey, however, while it was expanding it had yet to grow to its full size. Consulting these records and searching for Frank Bentall we find him as the freeholder owner and occupier of the shops and showroom encompassing 39 & 41 and 31 to 25 Clarence Street, Kingston upon Thames. The Valuation Office had assessed Bentall's plot, 644, to be worth £27,000 or approximately £2,545,000.00 in today's money even before Bentall expanded the footprint of his store when he had the large 1935 building constructed.

We can clearly see from the records that before the First World War the outline of the shop took in the corner of Clarence Street with Wood Street before skirting around the Clarence Arms pub at 33 Clarence Street and a house and shop at 35 owned and occupied by R. W. Evans and Miss Hutley at number 37. There are several other shops that were yet to be incorporated into the department store and a school; but it is the difference between the 1914 Lloyd George Domesday Survey map and the modern Bing Hybrid that shows how the area has since changed.

Noticable is that the large vicarage and its grounds have disappeared. Consulting the field books linked to the maps also reveals a sketch plan of the long gone house and grounds at 20 Wood Street. The vicarage is recorded as having been owned and occupied by the Rev A. S. W. Young and had a frontage of 340 foot 7 inches (near to 104 meters). The other striking difference is the large rectangular John Lewis building with the Horse Fair redirected under the structure, cutting a swathe through the former public baths and a number of small houses built around 1897. 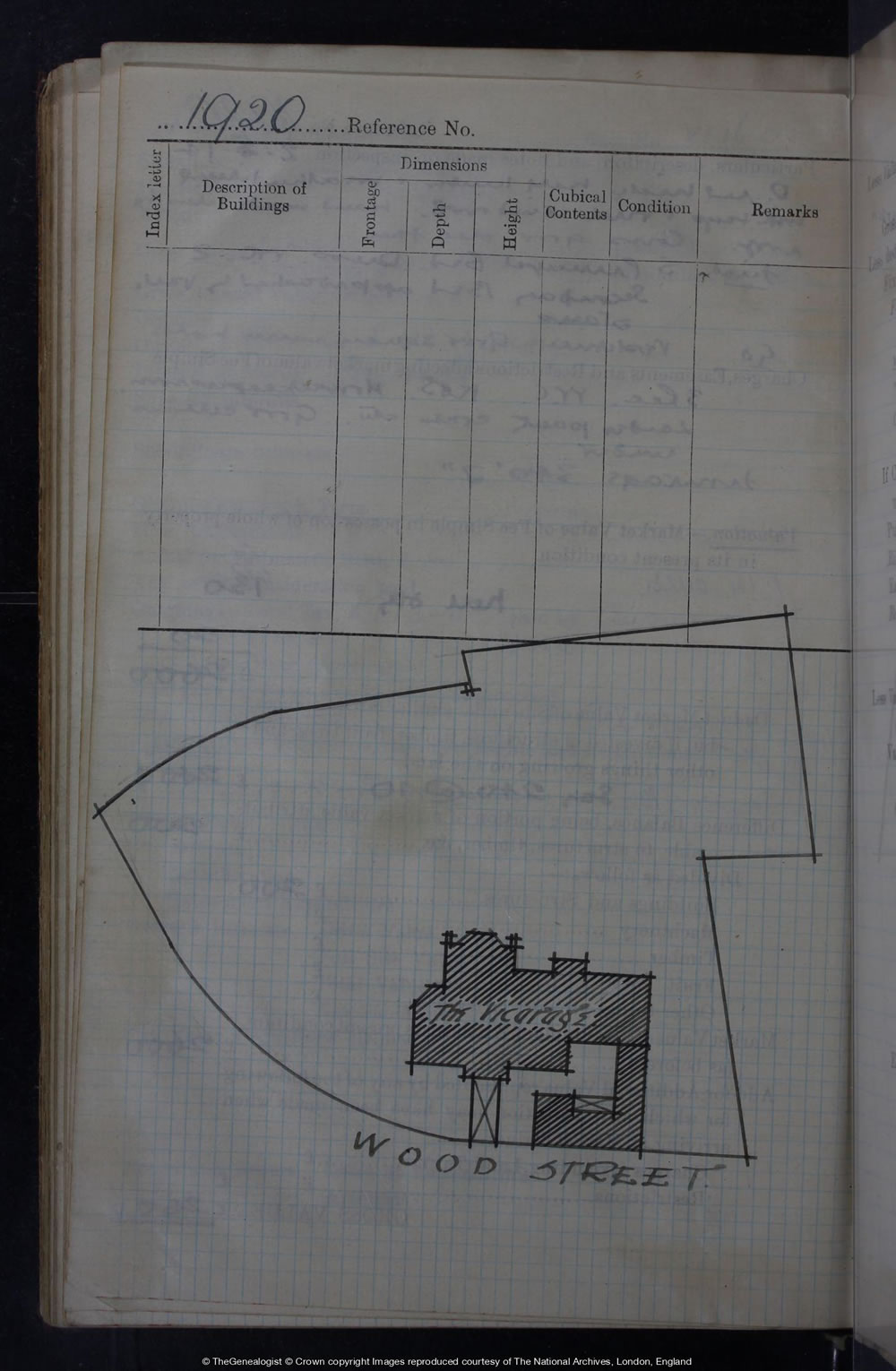 By consulting the maps and field books used by the Valuation Office to draw up its survey we are able to see a snapshot of property ownership and occupation in Kingston upon Thames as it was in 1914, just before the First World War. These records that are part of the IR58 records from The National Archives that are only available online at TheGenealogist and can be invaluable to find where ancestors lived at this time or to research a house or building's history.