Avro Lancaster B.I (R5729 KM-A), of 44 Squadron running up its engines in a dispersal at Dunholme Lodge, Lincolnshire before setting out on a night raid to Berlin in early January 1944. Credit: MoD/Crown copyright 1944.

TheGenealogist has now added to its extensive Military records with a gripping collection of Second World War Air Ministry operations record books (ORBs) for various Royal Air Force, dominion and Allied Air Force squadrons that came under British Command. These AIR 27 records allows us a fascinating insight into a number of wartime RAF units. The records provide summaries of events and can reveal the death of aviators, crashes, as well as less disquieting details such as weather and places patrolled by the planes. As personnel are named in these reports, the researcher wanting to follow where an aircrew ancestor had been posted and what may have happened to them will find these records useful. You can find aircrew duties recorded in many of the documents revealing such assignments as Bombing, Convoy Escort, Submarine Hunt, Attack Docks & Shipping and Dive Bombing Raids to name just a few. This information could be useful in understanding some of the missions that a family member was tasked with undertaking, especially when so many revealed very little about their war experiences to family.

For example a search of the records for Wing Commander Paul Farnes, who has just died aged 101 and who was one of only three surviving Battle of Britain aces (a pilot who shot down five or more enemy planes) discovers him in a huge number of ORBs for 501 Squadron. We see documented that he began flying as a Sergeant Pilot in January 1940 when he was first recorded doing his Service Training. We can then follow him as he hones his skills doing his Air Firing, Night Flying and Formation Practice on various days in the next few months. His aircraft type was the illustrious Hawker Hurricane, a single-seater fighter responsible for 60 percent of the losses inflicted on the Luftwaffe and powered by the Rolls-Royce Merlin.

It was on 12th May 1940 that Farnes was able to lay his first claim to success by bringing down an enemy bomber 30 miles N.E. of Betheniville with another pilot from his squadron. This was recorded in the Squadron's ORB for the time and can be found in the newly released reports on TheGenealogist. 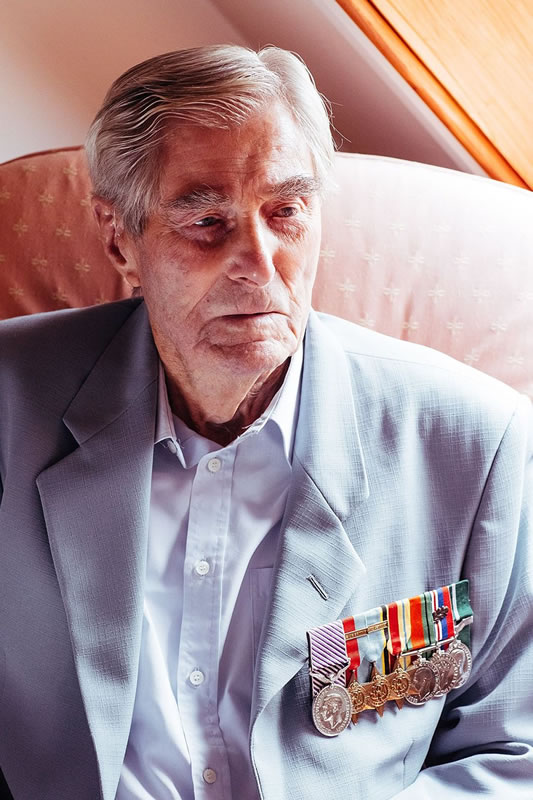 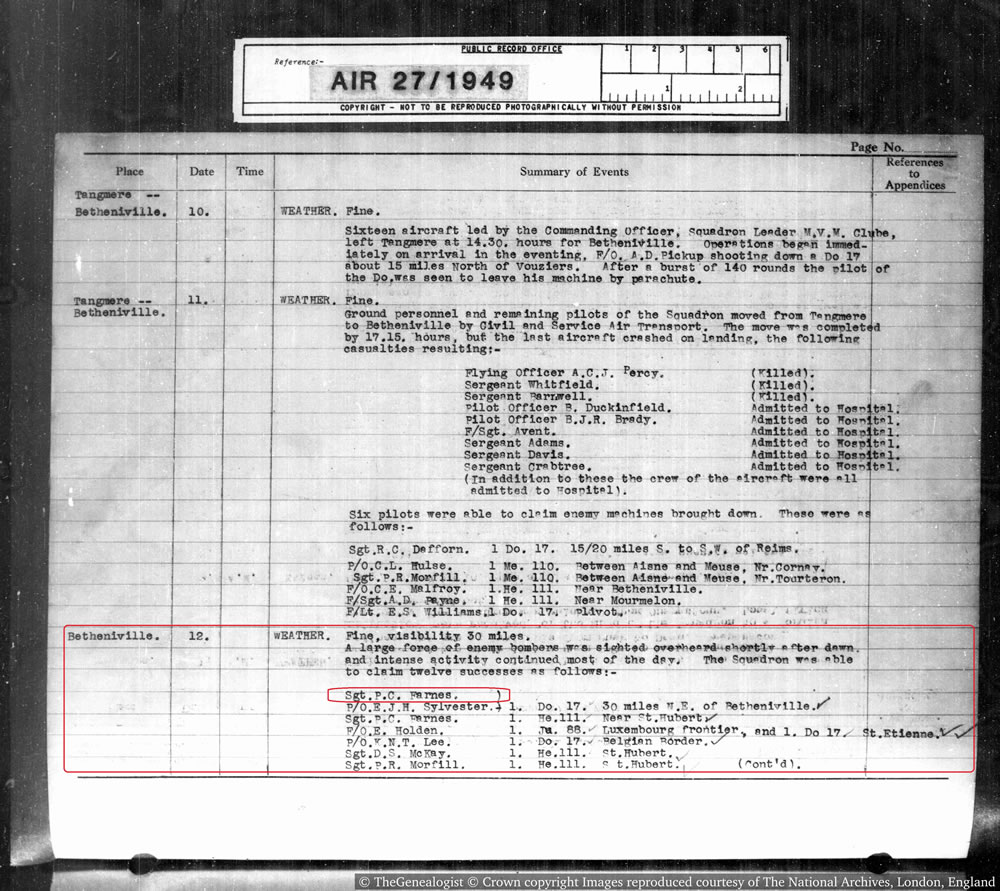 Farnes was then about to take part in the Battle of Britain, 10 July – 31 October 1940 and become one of 'The Few' – the name given to them after Winston Churchill gave a speech in the House of Commons in August 1940 and said the immortal words: 'Never in the field of human conflict was so much owed by so many to so few.'

During August 1940 Sgt. Farnes claimed five more aircraft destroyed and on 14 September 1940 while flying with Blue section of his squadron, he engaged a Dornier Do 215 light bomber and damaged the enemy aircraft. This we can see drew a mention in the records of his squadron on that day.

Another report, at the end of the same month, mentions Sergeant Farnes encountering a Junkers 88:

"The enemy aircraft was already emitting white smoke, and after getting in a long burst he saw his enemy crash at Gatwick."

In October 1940 the airman was awarded the Distinguished Flying Medal (DFM) and the sergeant pilot was then given a commission as a Pilot Officer (on probation) on 3 December 1940. In February 1941 Farnes was then posted to No. 57 Operational Training Unit as an instructor until in November 1941 he transferred to No. 73 Operational Training Unit in Aden. He was confirmed in his rank and promoted to war-substantive flying officer on 3 December 1941. He then followed a posting to No. 229 Squadron RAF in North Africa as a flight commander in February 1942 and he flew with the squadron on 27 March 1942 to Malta where he later took command of his squadron.

In late May 1942 Flying Officer Farnes returned to North Africa and on 26 July 1942, he was promoted to war-substantive flight lieutenant. There then was a posting to Iraq, where he joined the RAF headquarters staff and remained there until March 1945, receiving a promotion to war-substantive squadron leader on 1 May 1944. On his return to the U.K. he was put in command of No. 124 Squadron RAF, a command he retained until the end of the conflict and ending the war with the acting rank of wing commander. After the war he remained with the RAF until 1958 when he finally retired from the service.

Other Heroes in the ORB records

Also included in this set of RAF records are some poignant press cuttings pasted into the ORB revealing the posthumous award of a VC to F/Sgt George Thompson, the quiet grocer's boy from Kinross in 1945. His Lancaster on fire, and while in pain from burns, he carried two of his helpless comrades through the flames. The brave wireless operator, however, died of the injuries that he received in the rescue, enduring three weeks of suffering. 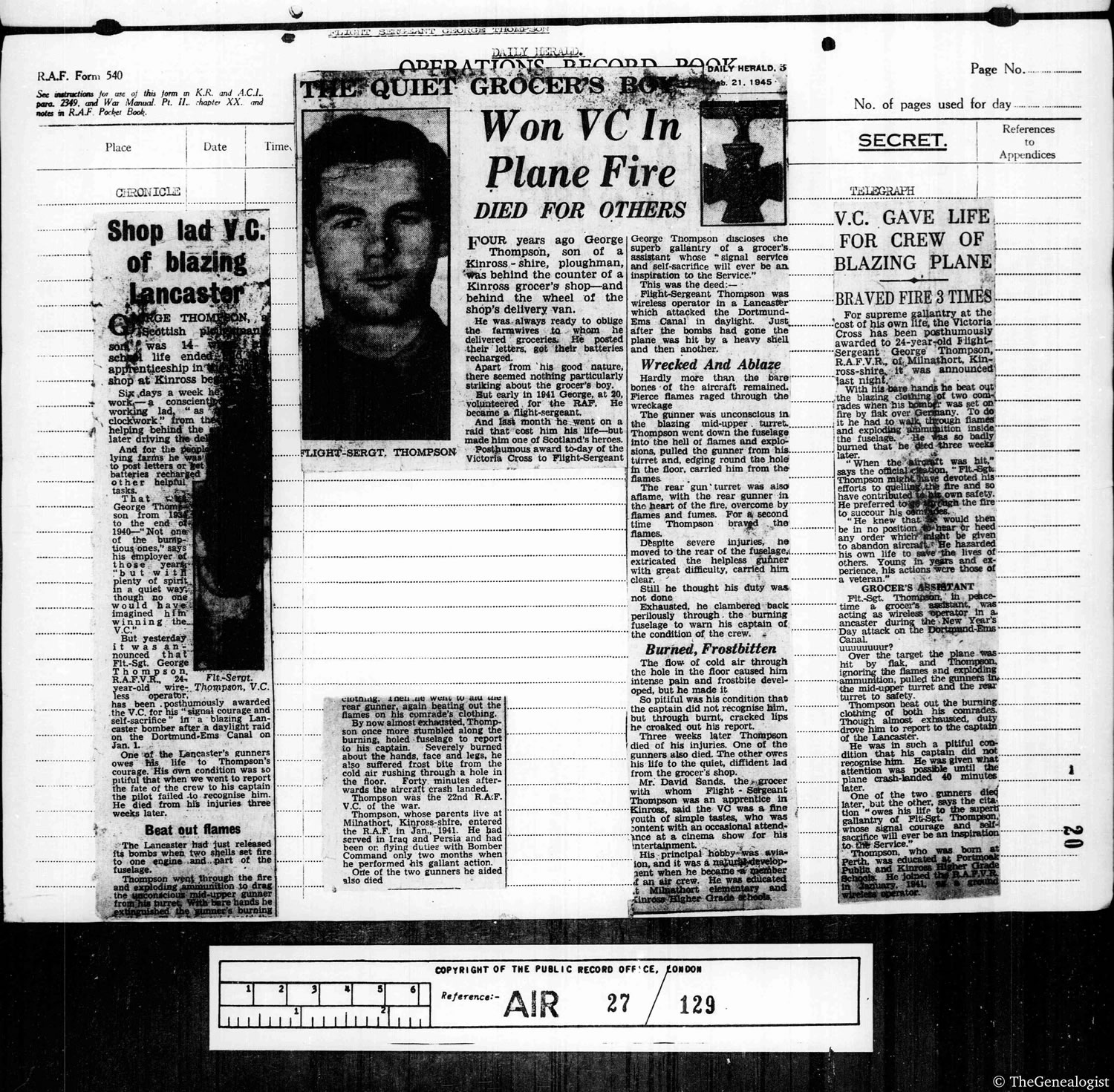 Parties and a wry sense of humour

While some of the entries are just an accurate and formal record of operations carried out by a squadron – the action in the air, the practice runs and day to day duties – other reports do show various lighter moments. A good example is that for No 3 Squadron in August 1945 after VE day had occurred three months earlier. The squadron were, by that time, based in Germany and we can read about the sorties flown, but also on the 4th August a 'terrific party was laid on by 39 ( R ) Wing to celebrate the wing disbanding...It was well patronised, several nurses and Ensa girls turned up.' The next day the entry was very brief, limited to just three words: 'No flying today.'

On the 8th of the month the squadron then moved to the Northern German city of Lubeck to join 124 Wing under the command of the famous ace Group Captain Johnny Johnson D.S.O., D.F.C., This movement is recorded in the ORB for that day with the compiler of the diary injecting some wry humour into the official account by writing: 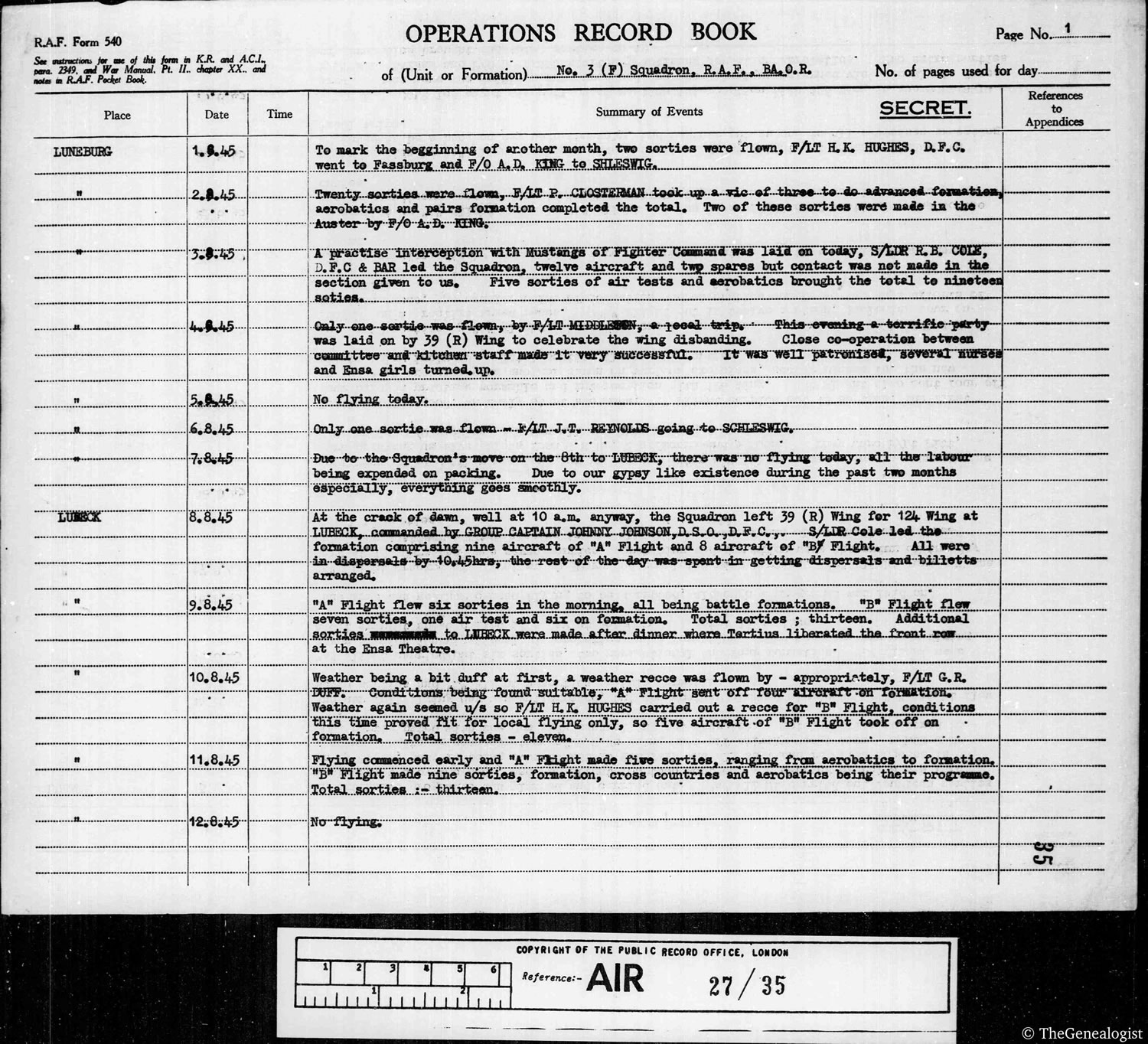 Operations Record Book for No 3 Squadron

These National Archives records are the first batch of AIR 27 records to be released by TheGenealogist and provide a terrific insight into the working of many of the flying operations that RAF aircrew completed. This searchable recordset is unique to TheGenealogist. They are also an excellent source for building a picture of squadron operations and discovering what family members who served as aircrew did in the Second World War.