If you are researching where your ancestors lived in the early part of Queen Victoria's reign then the National Tithe Record Collection on TheGenealogist is a tremendous resource that you can use. This massive Victorian land survey allows researchers to view the plots where ancestors had lived, or worked, on tithe maps which are linked to fully searchable apportionment books with details of the landholding whether large and small.

The great advantage of this recordset is that it is not just the wealthy landowners who are recorded in this study, although even Queen Victoria herself appears alongside her more lowly subjects. From the small cottage, or a parcel of land used to grow some vegetables, to the large country estate the owner and occupier of any titheable land had to be recorded and details then sent on to the Tithe Commissioners. Covering the vast majority of the country the original records were compiled between 1836 and the 1850s with some later altered apportionments being made when property was sold, or the way that the land was divided up required the change to be recorded. 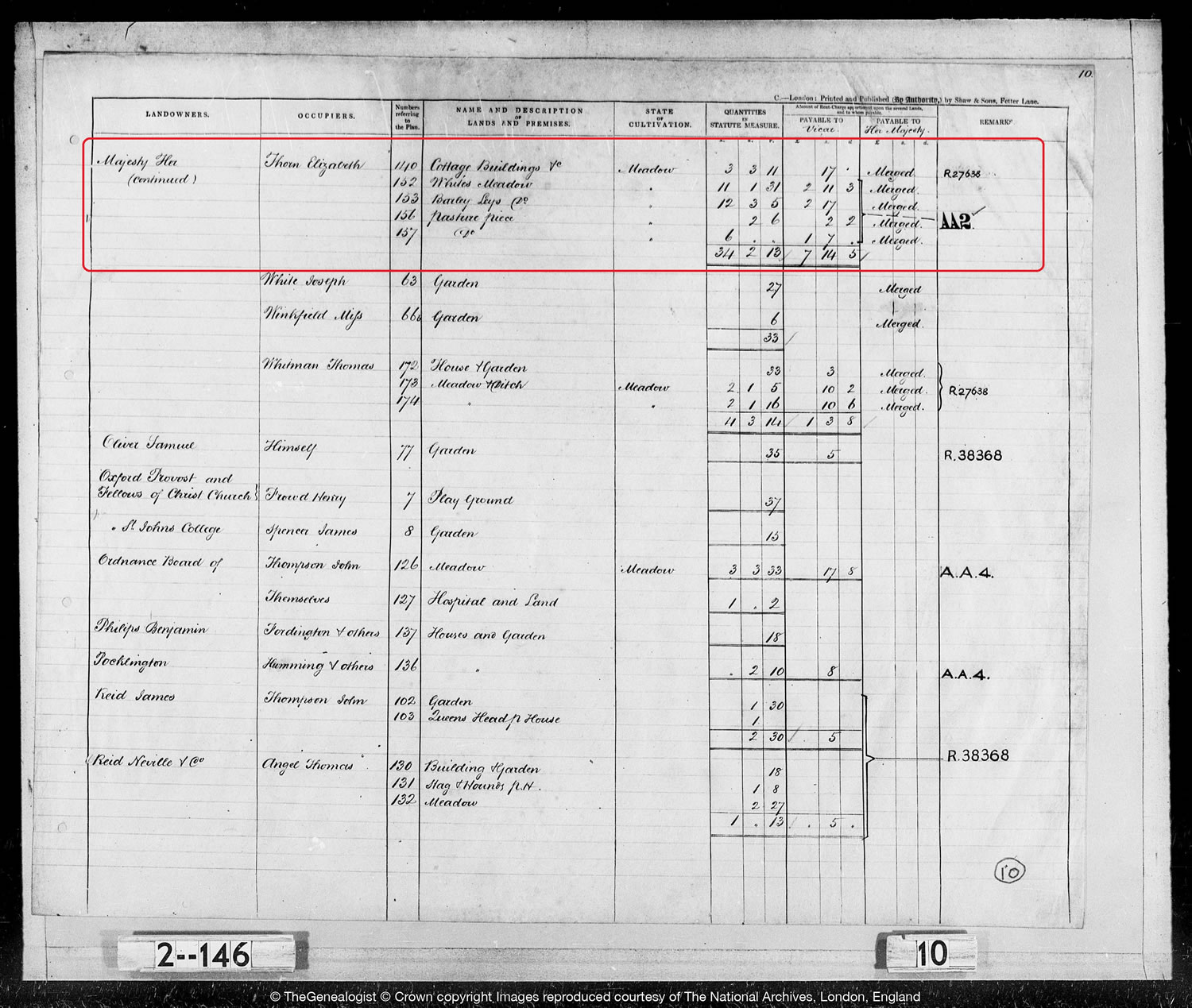 Apportionment book for part of Windsor recording a cottage, meadow and pasture owned by the Queen occupied by one of her subjects

Tithes, originally one-tenth of the produce of the land, were paid to the church and, after the Reformation, to some lay tithe owners as well. These "lay impropriators" were often landowners that, on the redistribution of monastery property in Henry VIII's time, had gained the rights to the tithe rent payments payable to the former religious house that formerly stood where the estates of the lay landowners now stood. When this land appears in the 19th century records, the sums payable to the successive landholders will be listed within the apportionment records. So you may find that an amount of rent was destined to go to the vicar, and another sum to a non-ecclesiastical landowner. In some cases the landowner is also the lay impropriator and so, in theory at least, he paid himself as well as the vicar a tithe on his land.

It has always been the case that researching our ancestors' family tree is made more interesting when we take into account the social and geographical influences that they would have lived with in their times. TheGenealogist's Map ExplorerTM can be used to view a current total of 3,317 tithe maps from the early years of Queen Victoria's reign as well as the Parish boundaries for the area. The versatility of this tool means that it features layers of georeferenced maps that can be faded in and out by using the opacity controls. This then allows the researcher to see a picture of how an area has changed over time. If you want to develop the story of the lives of your ancestors then being able to see where your ancestors once lived can give you a better feeling for the area. It can allow you to better understand how the area may have impacted on members of your past family with regards to the availability of jobs for them, or the routes that they could have taken to move on to the surrounding towns and cities.

The Map Explorer™ is also of great use for people tracing the history of their houses, as well as for metal detectorists who find that the tithe maps that are being added are a useful tool for locating areas for them to investigate in pursuing their hobby. The ability to locate owners and occupiers from TheGenealogist's National Tithe Map Collection as well as other map collections as they are uploaded to the website, such as the Lloyd George Domesday Survey maps linked to the field books, can be used to identify land occupation over time. Viewing these georeferenced historic maps overlaid on top of modern background maps including those from Open Street Maps, Ordnance Survey and Bing street, satellite view and Hybrid allows a researcher to see how areas have developed from the Victorian era right up to to the current times. With the Map Explorer™ you can search for an ancestor's property, discovering its site, even if the road has changed or is no longer there. Additionally inside the Map Explorer™ users can select to search for the locations on maps of a War Memorial or graveyard and then view the headstones or memorial. To search the tithe records by a person's name, to find where they are recorded as an owner or occupier, can be done using TheGenealogist's Master Search which gives access to all the black and white tithe maps from the collection.

TheGenealogist has just released the already digitized black and white tithe maps for Berkshire, Cambridgeshire, Leicestershire and Oxfordshire into the Map Explorer™ so that users can now take advantage of the ability to see how an area has changed from early Victorian times up to the present day. Look out for future releases of tithe maps into this versatile tool that are coming soon on TheGenealogist.