In 1849 Joseph Willis of Norden passed away. He was 82 at the time of his death and according to his obituary in The Gentleman's Magazine published at the end of 1849, he had been the 'steward to the late Earl of Eldon for upwards of half a century'. A search of the Prerogative Court of Canterbury Wills that can be found on TheGenealogist discovers his last will and testament where he is described as a 'Gentleman' of Norden in the Parish of Corfe Castle. From the 1841 census we see that his status was recorded at this time as a 'Yeoman'. Other records point to him as having been a 'Clay Agent' while, in an online history of the Middlebere Plateway, a horse drawn tramway that ran from the clay pits in the area to the Middlebere Creek in Poole Harbour, he was described as the manager of the clay pits while also being the tenant of Norden Farm. 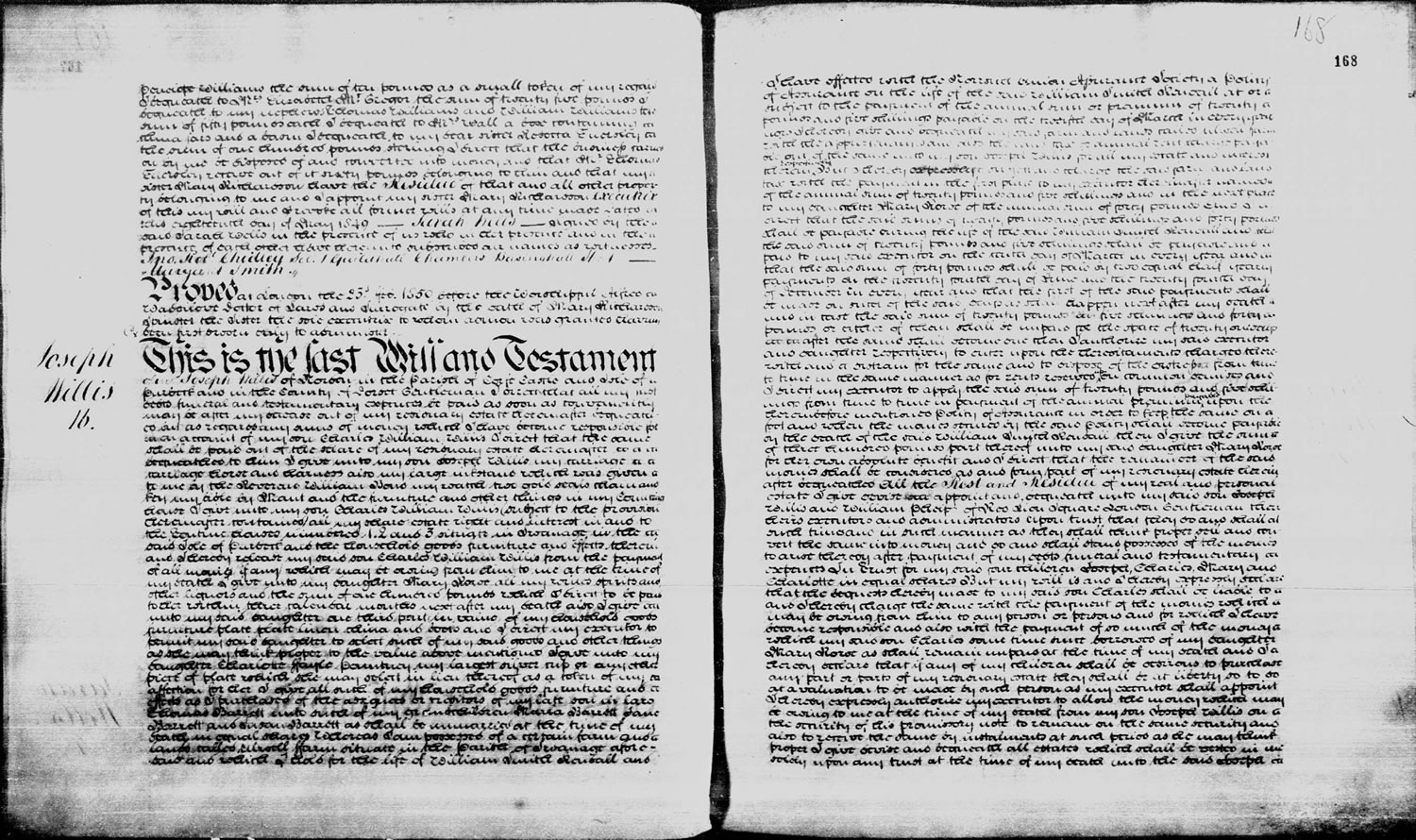 The Middlebere horse drawn railway at first served clay pits that had been established on the east side of the road from Wareham to Corfe Castle. After a while the plateway was then extended under the road to serve clay workings that were on the other side of the road as well. This required the construction of two tunnels under the road to reach the different workings and these can be clearly seen on the tithe maps from 24th February 1843.

By using the National Tithe Record Collection on TheGenealogist we are able to find Joseph as the occupier of Norden Farm with its pasture lands, meadows, coppice and arable land as well as the Clay Pits. These records tell us that the land around Norden Farm were all owned by the Earl of Eldon, to whom we had previously discovered Willis had been the steward. But this was not the only land that Joseph Willis occupied in and around Corfe Castle as exploring the area's tithe maps will reveal. 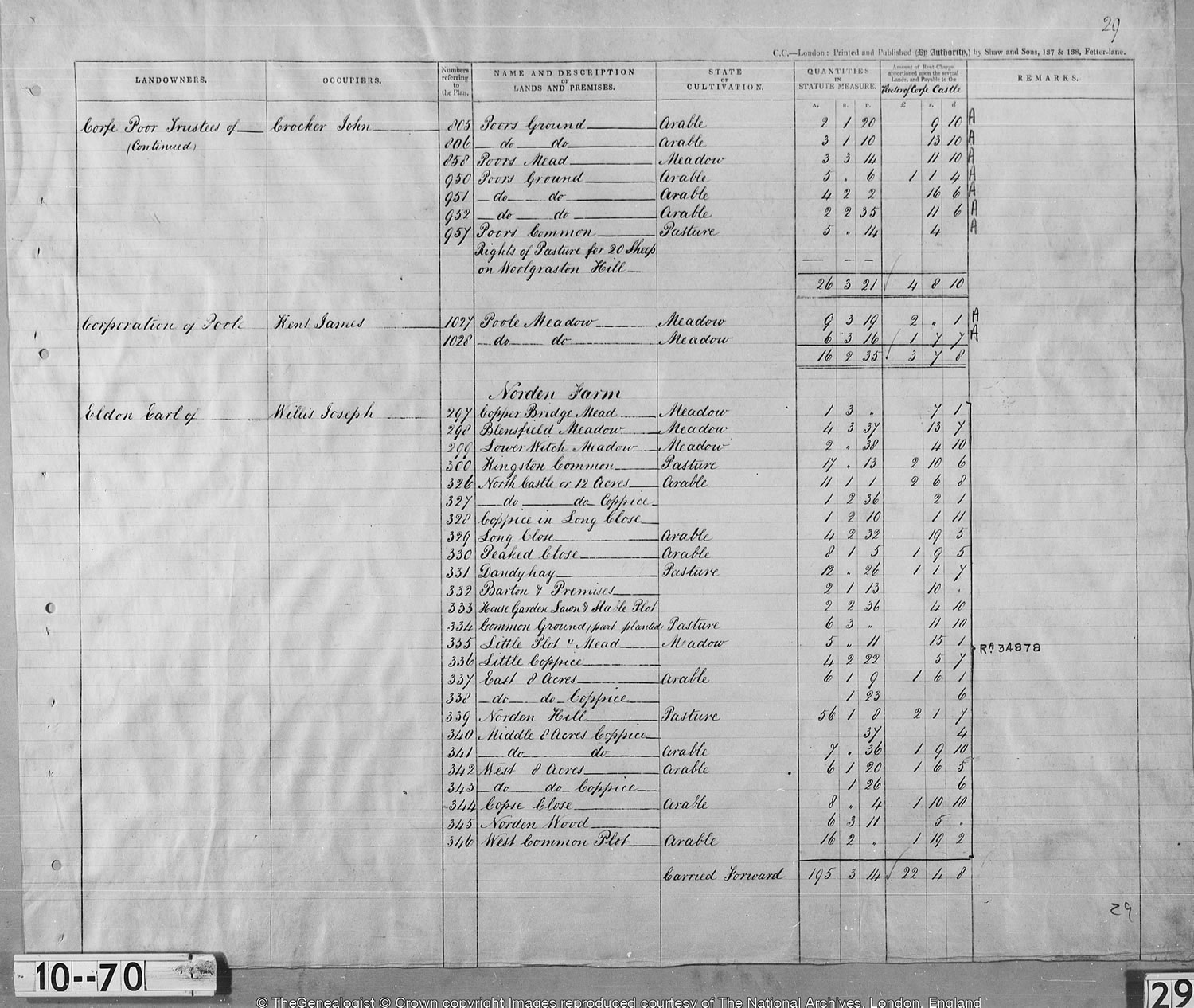 A Village, Civil Parish and a Castle

TheGenealogist's Map Explorer™ is a powerful map resource that, by using georeferenced modern and historical maps, allows users to see the environment in which our ancestors had once lived in and to then compare this to the modern topography. By selecting Tithe as the 'Record Set - Top Layer' on TheGenealogist's Map Explorer™ interface, we can switch between the Victorian tithe map and various modern map overlays. Having found Joseph Willis's Norden farm on the road north of the village and castle, we can then scroll down the tithe map displayed on the Map Explorer™ to see its location in relation to the ruins of the castle and the village. 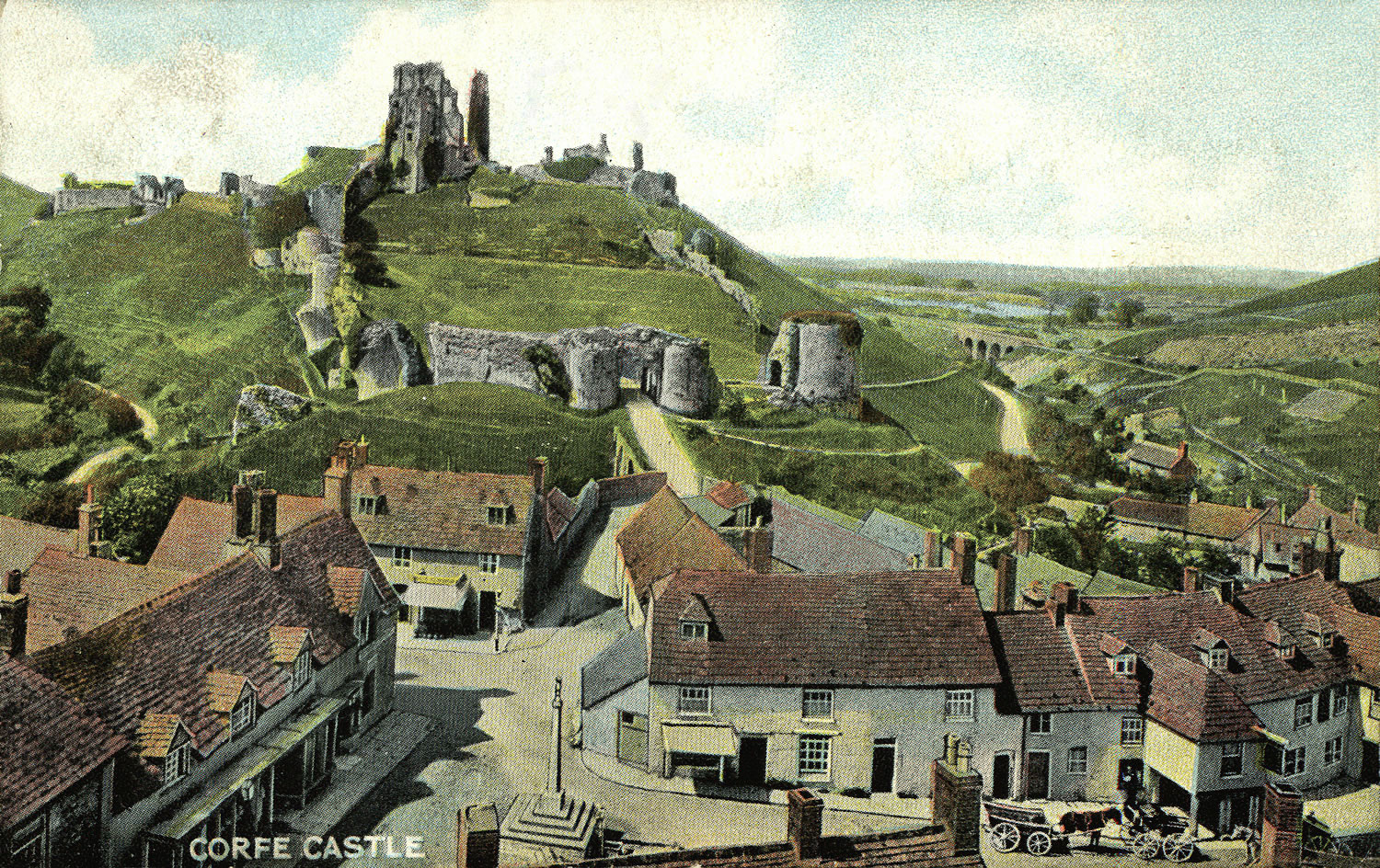 Corfe Castle is the name not only of the fortification itself, but also of the Dorset village at its foot and the civil parish in which they both sit in the Purbeck Hills. Today the Castle on the road between Wareham and Swanage is owned by the National Trust and is open to the public. It is a spectacular set of romantic ruins situated on the top of a steep Motte. On the side of this precipitous mound Soay sheep now graze the grass to keep it maintained. 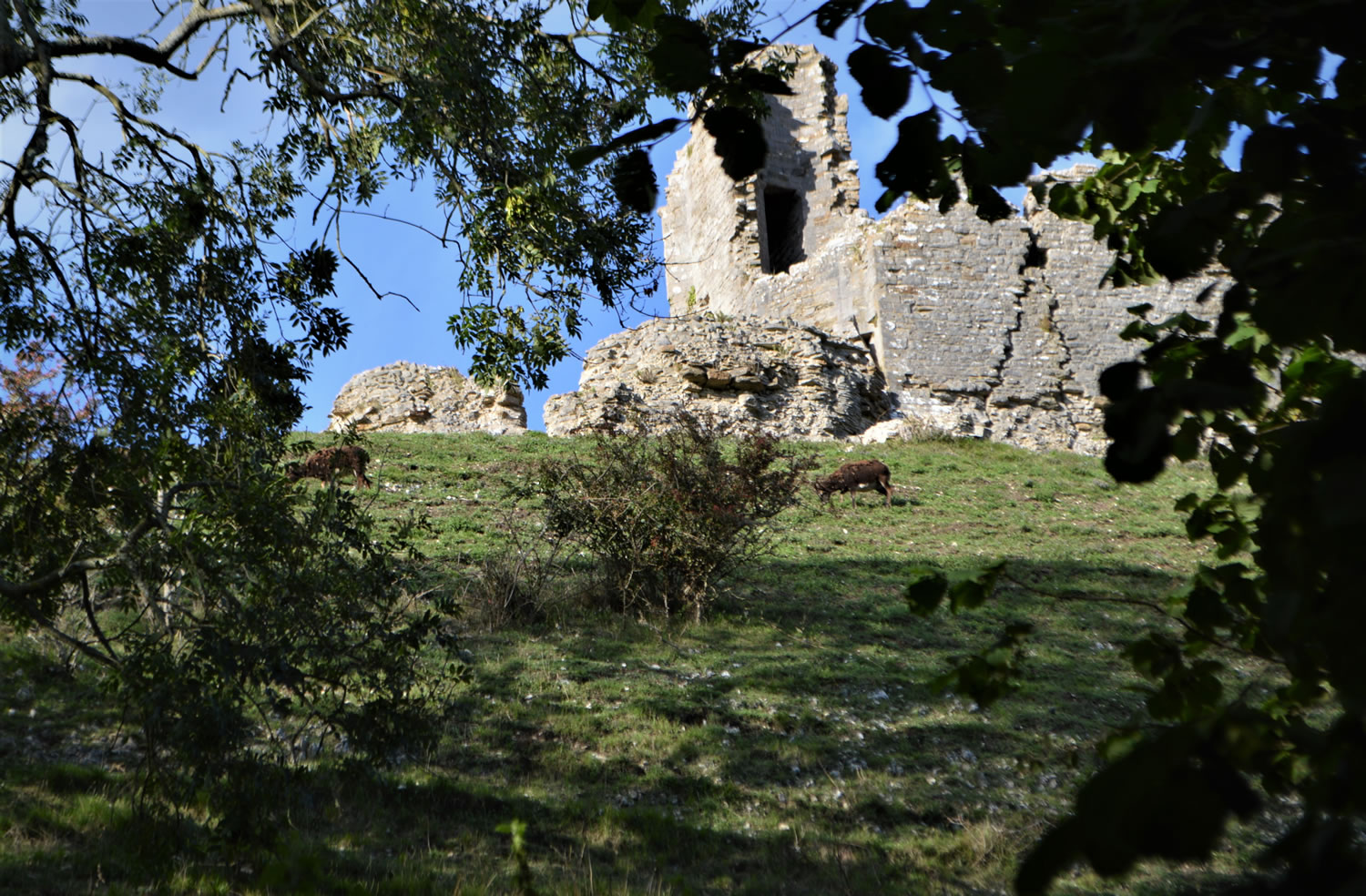 By using the tithe maps, from within TheGenealogist's Map Explorer™ and zooming in on the maps until the plot pins appear, we are able to see who owned and occupied the ruins at the time of the national tithe survey in 1843. The occupier of both the interior, as well as the exterior plus some of the fields around it, was none other than Joseph Willis. The land, identified as the castle interior and exterior, is identified as pasture in both cases and so we can wonder if Willis was using it for grazing his own sheep some 177 years back.

Unlike Norden Farm, the landowner was not the Earl but George Bankes Esquire. The castle had been in the Bankes family since 1635 when it had been sold to his ancestor Sir John Bankes. Sir John was at one time England's Attorney-General and afterwards the Lord Chief Justice. While the castle had a history stretching back to the 11th century and its construction by William the Conqueror, its destruction was in the English Civil War period when gunpowder was used to blow it up.

In 1572, Corfe Castle, once an important royal castle was sold by Queen Elizabeth I to Sir Christopher Hatton. Sir John Bankes had then bought the castle in 1635, and was the owner during the time when Parliament and the royalists' forces battled it out over how the country should be governed. Sir John's wife, Lady Mary Bankes was a formidable woman who led the defence of the castle when it was twice besieged by Parliamentarian forces. The first siege in 1643 was unsuccessful, but by 1645 Corfe was now one of the last remaining royalist strongholds in southern England. In February 1646 a turncoat Lieutenant Colonel led parliament's soldiers in through a sally gate and the castle fell in the assault. The castle having fallen, its fate was its demolition to reduce it to ruins. In March that year Corfe Castle was slighted on Parliament's orders when it was destroyed and stripped of all its possessions. 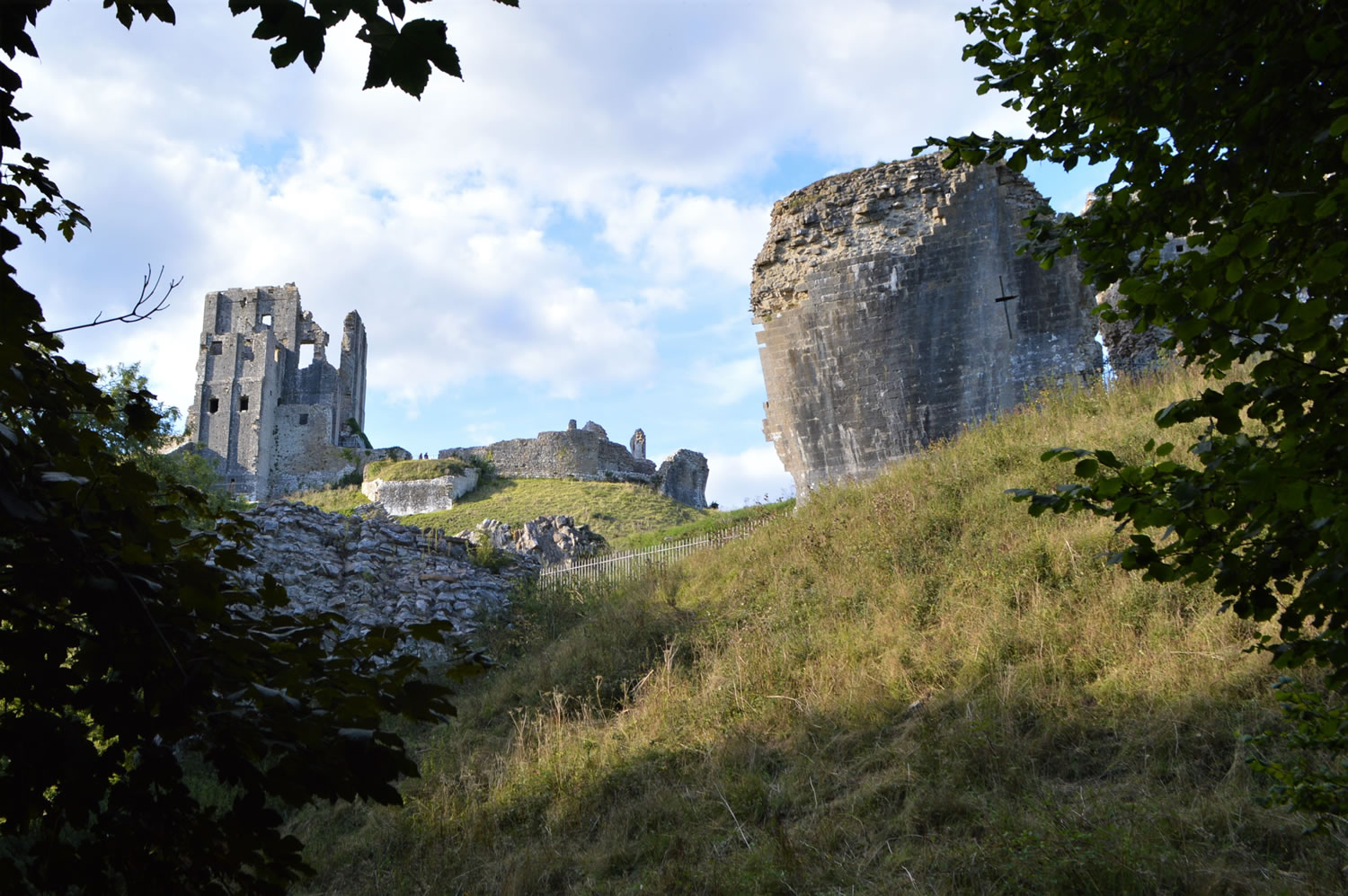 In Victorian times, when the tithe survey was being taken, the castle and its surroundings would seem to have only been of use as pasture land. This can be seen in the linked apportionment book that lists land around the castle occupied by Joseph Willis. 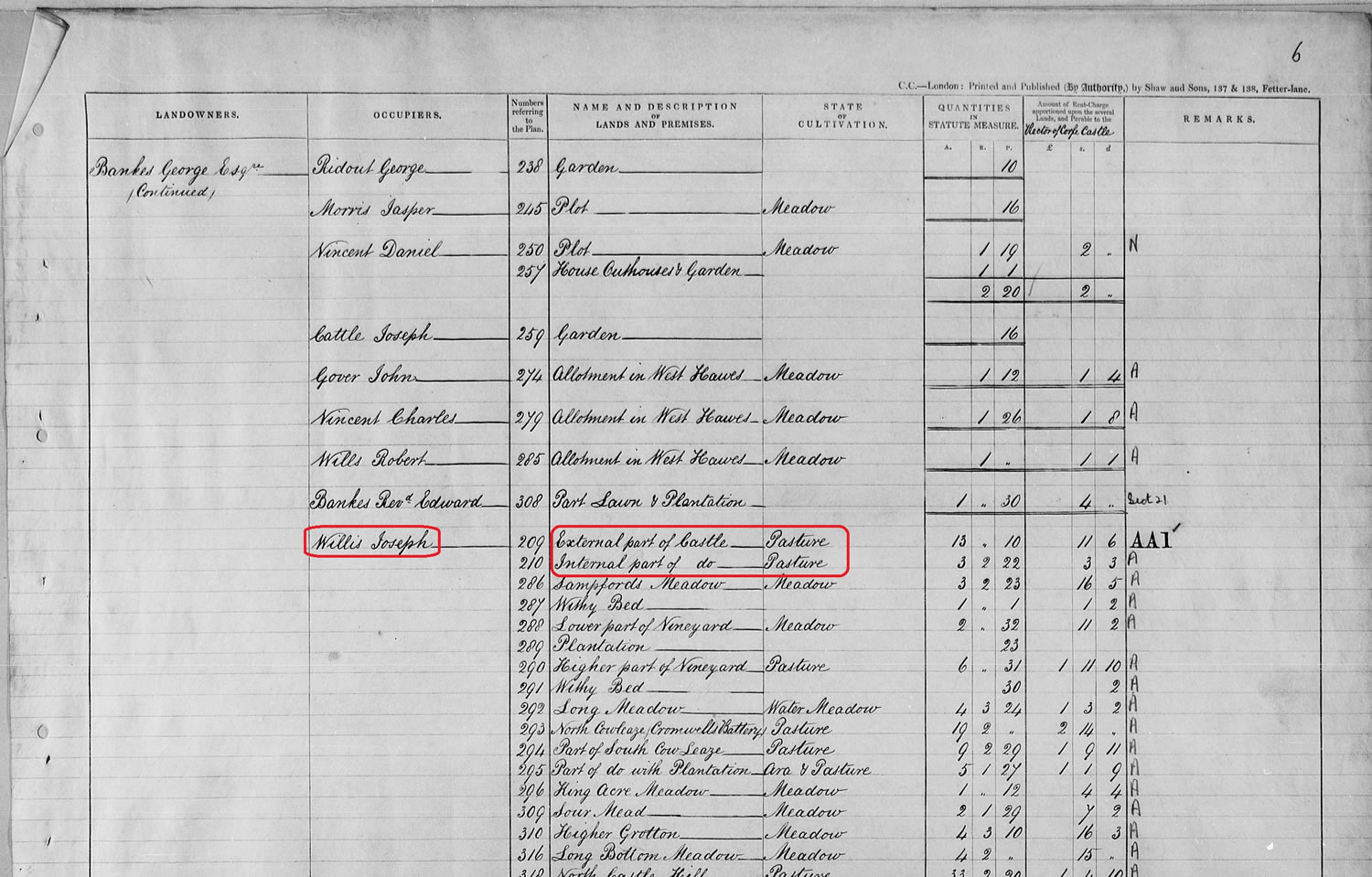 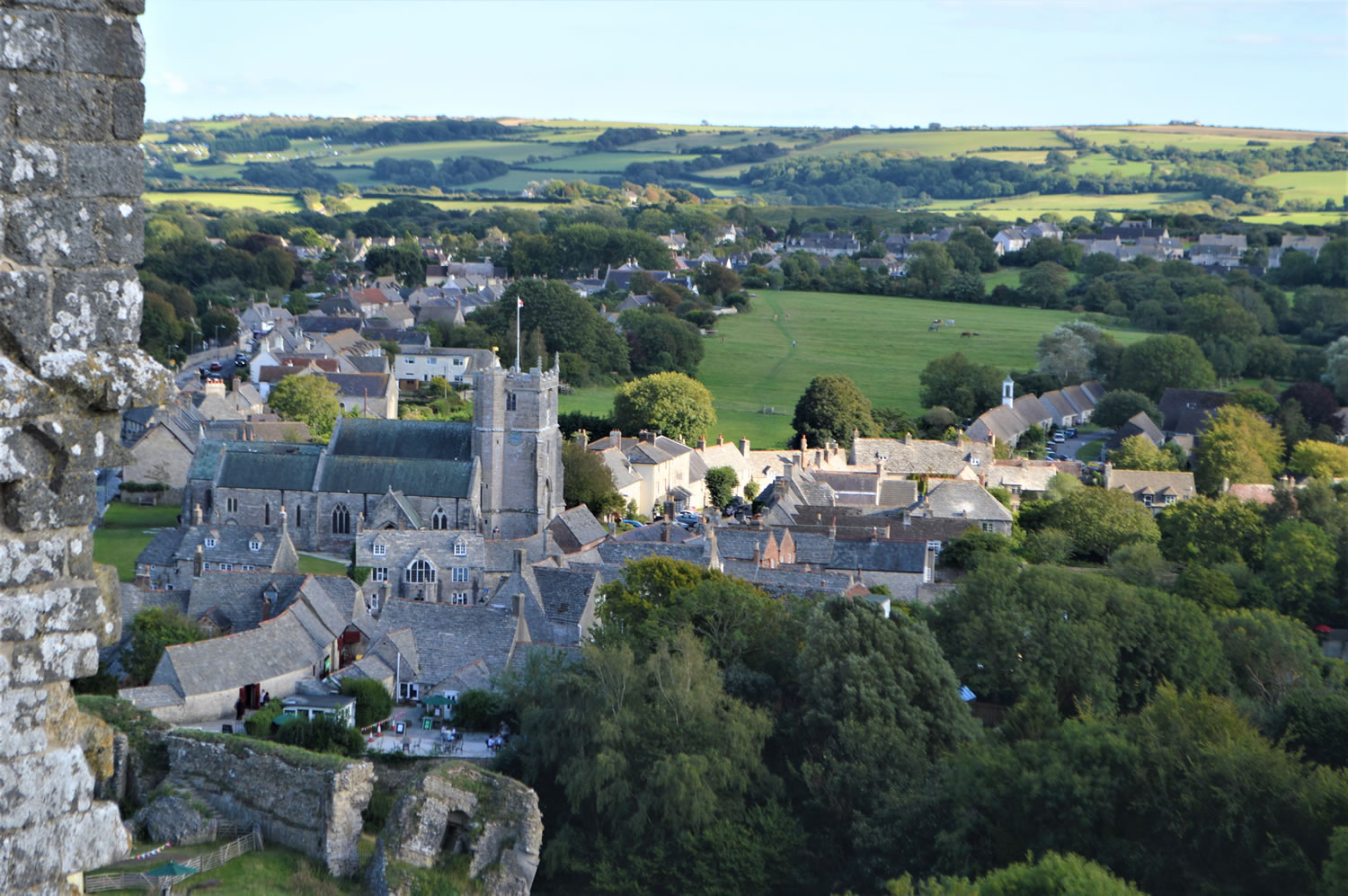 The village of Corfe Castle, Dorset taken from the ramparts of the ruined castle of the same name. Image Copyright N.Thorne 2020

Tithe records and maps on TheGenealogist's Map Explorer™ can be an absorbing way to find out more about where your ancestors lived and worked. Some of the occupiers may only have had a small plot, as we can see on the page of the apportionment book for the castle. Above the extensive listings for Joseph Willis is one for George Ridout whose Garden is listed as being just 10 perch in size. That is 302 1/2 square yards. It is not just large landholders who appear in these fascinating records.