Worcestershire parish records trace family events back through the centuries

We find the baptism of a teenager transported to Australia on the First Fleet, plus her parent’s marriage to confirm her Worcestershire roots

Sarah Bellamy was only a 15 year old girl from Worcestershire when she was sentenced to seven years' transportation beyond the seas. It was almost two years later, however, that she actually left the shores of Britain as a convict on one of the ships of the First Fleet to Australia. Sarah would become one of the longest-living first fleeters, dying in February 1843 aged 73 in Australia. Spending more of her life 'down under' than she ever did in Britain, she was a Worcestershire girl from a village between Stourbridge and Bromsgrove. Sarah never returned home as once her sentence was spent, she remained on the other side of the world for the rest of her days.

We can find the family that she was forced to leave behind in Worcestershire by using the Births and Baptisms on TheGenealogist and so trace her roots. From this record set we are able to discover Sarah Bellamy in the Worcestershire Parish Registers for the Parish of Belbroughton, baptised on 3rd February 1770. 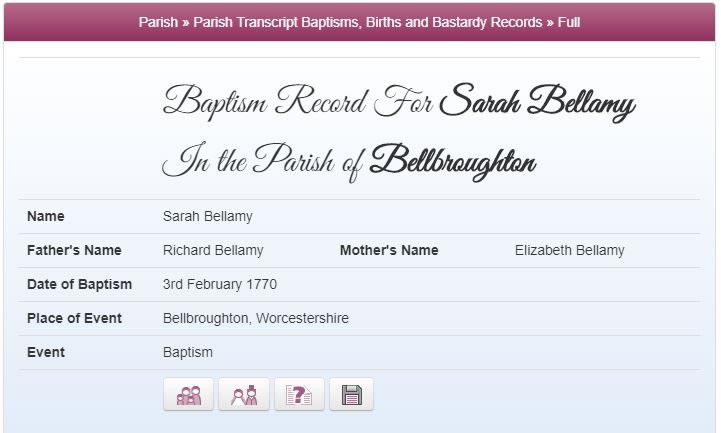 The transcript of these records identifies her parents as Richard and Elizabeth and by clicking the icons on the result we have a choice of investigating two linked recordsets using TheGenealogist's SmartSearch. The first link, indicated by a family group icon, enables us to discover Sarah's potential siblings. This reveals those with the same surname in the right period who had also been baptised in this parish and this suggests five probable siblings who were born between 1761 and 1776. The second link will allow a SmartSearch to be carried out to look for a potential marriage of her parents. This returns us not only the Banns of Marriage, but also the Marriage itself in Belbroughton. From these records we are able to learn that the maiden name of Sarah's mother had been Staunton and we also see the names of the witnesses to the ceremony who, in some cases, can be very useful to the researcher. 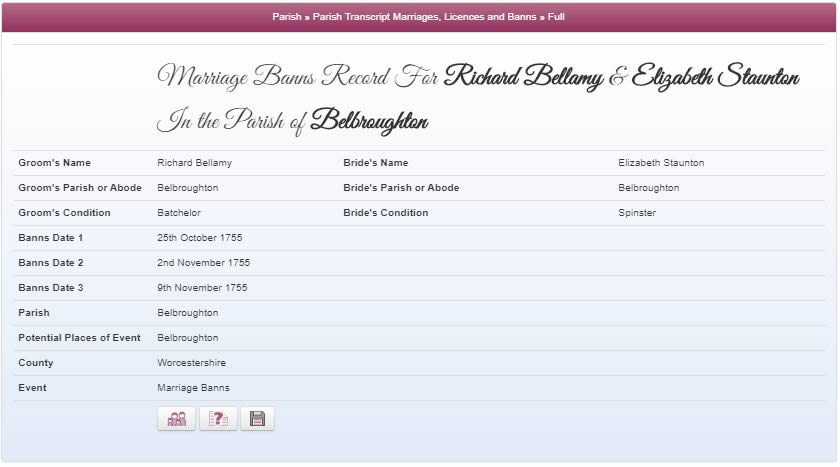 Marriage Banns in the Parish of Belbroughton on TheGenealogist 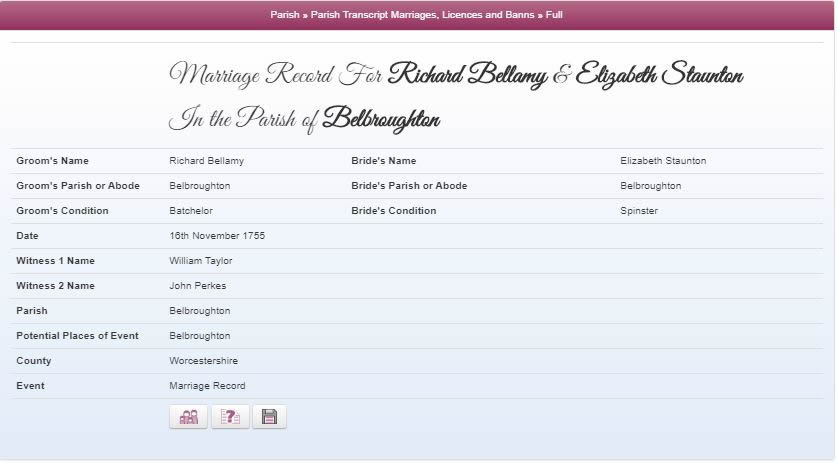 Marriage Record in Worcestershire Parish Registers for the Parish of Belbroughton 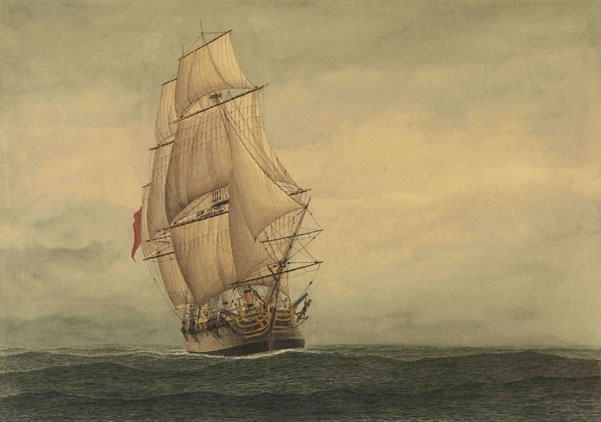 Lady Penrhyn was one of the First Fleet ships that took 101 female convicts on a 250 plus day journey to Australia. Image: Unknown author / Public domain

Sarah was convicted at Worcester in July 1785 for stealing; she was only 15 years old at the time. It would not, however, be until 13 May 1787 that she and hundreds of other convicts embarked on the 250 plus day journey to establish a new penal colony in Australia. The First Fleet, as it became known, consisted of 11 ships that left from Portsmouth to make the arduous journey across the world. First, they sailed southwest to Rio de Janeiro before changing course and heading west to Cape Town and then across the southern ocean to Australia where they were the first convicts in the new penal colony.

Sarah Bellamy's forced transportation to Australia aboard the ship Lady Penrhyn was in the company of one hundred other convicted women on the vessel. While it was a female-only convict transport it is reported that aboard the ship she had a short-lived relationship with one of the sailors, Joseph Downey. The result was a baby boy born aboard the ship, but sadly he died a few days after his birth. Sarah and Joseph's relationship, however, did not continue when they reached Botany Bay. She would have been put to work and online reports say that this was, at first, as a housemaid for a Lieutenant Faddy. TheGenealogist's Court and Criminal records include a number of HO10 Convict Transport Registers that record Sarah in the penal colony over the years.

After some years in New South Wales she and a new partner, a fellow convict called James Bloodsworth, began a family and they had eight children together, although sadly four died in infancy. James worked as a bricklayer and architect and soon they were able to live together in a good house and enjoy some wealth and social status in the colony. James and Sarah were never able to marry – he still had a living wife and children back home in England, his transportation forcibly separating him from them. James died in March 1804 from pneumonia, leaving Sarah alone with the children. She was eventually granted a conditional pardon by the authorities on 23 February 1811 and she continued to live in Australia without ever marrying until her death on 24 February 1843. Sarah was survived by four of her children, James Bloodsworth (died 16 April 1857), John Bloodsworth (died 14 April 1873) Ann Bloodsworth (Bray) (died 16 April 1875) and Elizabeth Bloodsworth (died 1871) – these were the beginning of her Australian descendants. But it is the traces that are recorded in the Worcestershire Parish Records, and which can be found in the Birth and Baptism records on TheGenealogist, that point to her roots being in Belbroughton in this part of Worcestershire.