A Window on September 1939 and George Formby the entertainer

The 1st September 1939 and Nazi Germany had just invaded Poland. Two days later Britain declared war on Germany and the government had to begin instituting the measures it would need for conscription and the introduction of ration books and identity cards. It would urgently need an up to date list of all the population and this couldn't wait for the next census that was scheduled for 1941. The solution was to take a survey of all the private citizens on 29th September 1939 and create what we know today as the 1939 Register. The resulting roll would provide the authorities with a snapshot of the civilian population of England and Wales just after the outbreak of the Second World War and today is of immense use to family historians looking for their forebears in this period.

The 1939 Register is made all the more important by the fact that the 1931 census for England and Wales was destroyed by fire during the Second World War and no census was actually taken in 1941. The Register, therefore, provides us with the most complete survey of the population of England and Wales between 1921 and 1951 which makes it an invaluable resource for all family, social and local historians. While the 1939 Register is not a census, it is arranged along similar lines and includes similar information, though this is less detailed. What it does better than a census, however, is show researchers the exact dates of birth where census returns just give a person's age. It continued to be updated until 1951 and afterwards by the NHS from its inception in 1948 until they began to transfer their records to computers in 1991.

The massive survey that was undertaken to create the Register was intended to record the details of every member of the civilian population on a specific date – military personnel were not recorded as the registration of members of the armed forces was dealt with by the military authorities. While the 1939 Register, therefore, does not include service personnel who were either in army, naval and air force establishments on the 29th September, or even military personnel who were resident or visiting their own home at the time, it does record people who would go on to serve in the armed forces at a later date. This is because in September 1939 conscription had not yet begun; compulsory enlistment was actually to start in October of that year.

At this time our relatives would have been well aware of the singer-songwriter and comedian George Formby as he became famous to a worldwide audience through his films of the 1930s and 1940s. George Formby was known for his appearances on stage and screen as well as his records. His act was to sing light, comical songs, usually playing his trademark ukulele or banjolele, and he would go on to become the UK's highest-paid entertainer.

Born in Wigan, Lancashire as George Hoy Booth on 26 May 1904 he lived until 6 March 1961. Formby was the son of George Formby Sr, from whom he later took his stage name. His father was not keen for his son to go into show business and so the young Formby started a career as a stable boy aged 7 and became a jockey, but Formby eventually took to the music hall stage after the early death of his father in 1921. Modeling his early performances exclusively from his father's act, including the same songs, jokes and characters it was in 1923 that two important things happened that would change his career. Firstly he married a fellow stage artist, Beryl Ingham, who became his manager and transformed his act and secondly he bought a ukulele. It was she who insisted that he appear on stage formally dressed in suit with a tie, and she introduced the ukulele to his performance for which he was forevermore associated with. Formby started his recording career in 1926 and, from 1934, he increasingly worked in motion pictures to develop into a major film star by the late 1930s and 1940s. At this time he became the UK's most popular entertainer. On film, he would be cast as an innocent Lancastrian who, according to the media historian Brian McFarlane, would win through against some form of villainy, gaining the affection of an attractive middle-class girl in the process.

His famous song 'The Window Cleaner', but better known as 'When I'm Cleaning Windows' did not go down well with the BBC's Director General, John (later Lord) Reith who banned it from the airwaves. In May 1941 Formby's formidable manager and wife Beryl informed the BBC that the song was a favourite of the royal family, particularly Queen Mary, while a statement made by her husband said: "I sang it before the King and Queen at the Royal Variety Performance". The BBC then changed their mind and started to broadcast the song over their airwaves.

It was in the period of the Second World War that Formby did a great deal of work for the Entertainments National Service Association (ENSA). He entertained both civilians and troops, and by 1946 it was estimated that he had performed in front of three million service personnel. 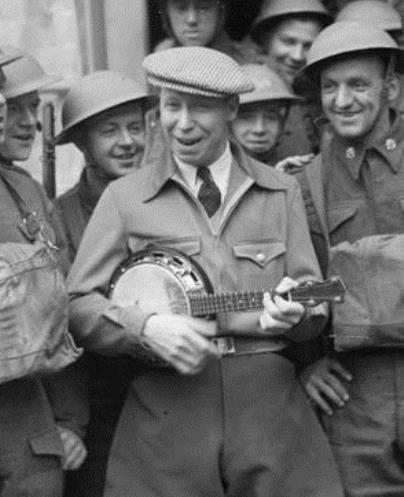 Formby in France during the Second World War

Ways of searching for our star

Hunting for George Formby in the 1939 Register using TheGenealogist has a number of advantages for the researcher. The interface at TheGenealogist allows for a highly flexible way for looking for your ancestors just prior to the Second World War – one which may just break down a brick wall in the 1939 Register. At TheGenealogist you are able to use keywords, such as the individual's occupation etc. You can also search for an address and then jump straight to the household. If you're struggling to find a family, you can even search for a household using just their forenames.

Using the Master Search to search for a person or family and selecting 1939 Register you can click on the street name in the results to view all the residents for the street. Once you've found a record, TheGenealogist's innovative SmartSearch technology enables you to discover even more about a person, linking to their Birth, Marriage (and/or) Death records.

Searching for George Formby will require us to use the name that he was recorded under and that is his real surname of Booth. If, however, we didn't know this surname then all is not lost as we could use a number of other search terms to find our entertainer in the 1939 Register on TheGenealogist.

With TheGenealogist, researchers are able to easily search for an address to find those individuals who can be freely seen in the Register. This will be those people who have been unredacted according to the criteria that 100 years has passed since their birth, or who have been proven to be dead. George and Beryl fall into that category and so we can see that Beryl's parents, retired hotel keepers, also lived with them plus two domestic servants to look after them all.

To do an address search from the Master Search on the main page of TheGenealogist you need to select 'Search for an Address' from the dropdown menu and then select the 1939 Register.

Using the Master Search and selecting an address

Turning to our example of George H Booth (George Formby) we may know the name of the road that he lived in, or the name or number of the house and so we could search for him that way. 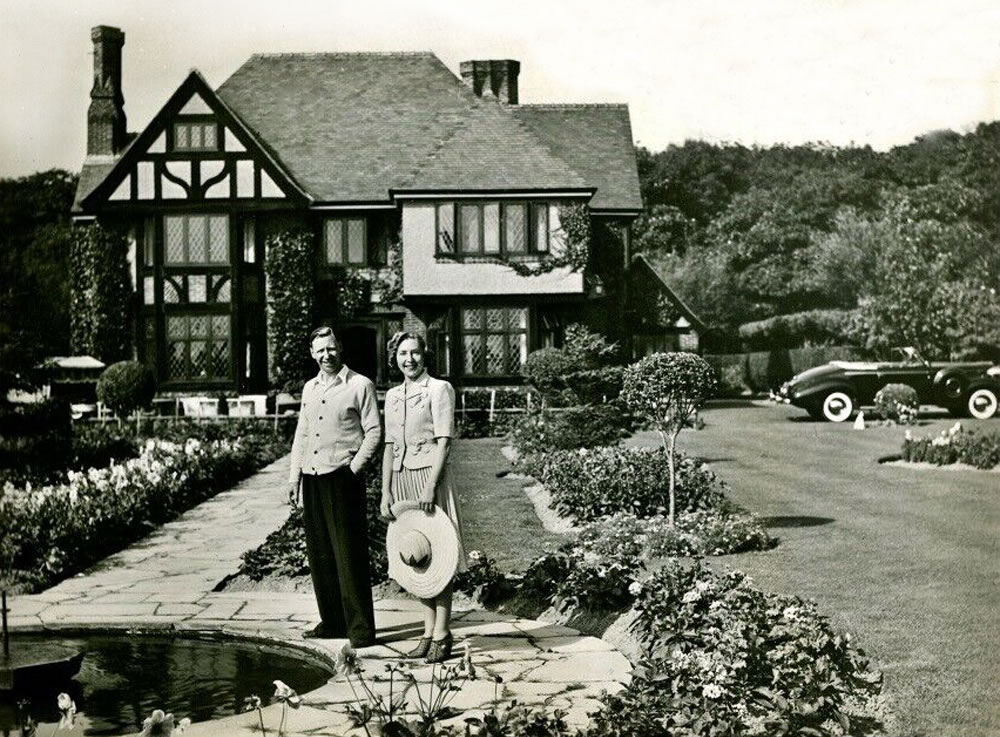 George and Beryl at Beryldene

George Formby's house, Beryldene, had been named for his wife, Beryl. If we knew this, or that the address was in Mains Lane, then either by including the road name or the house name in the address search would be enough for us to find our famous entertainer. 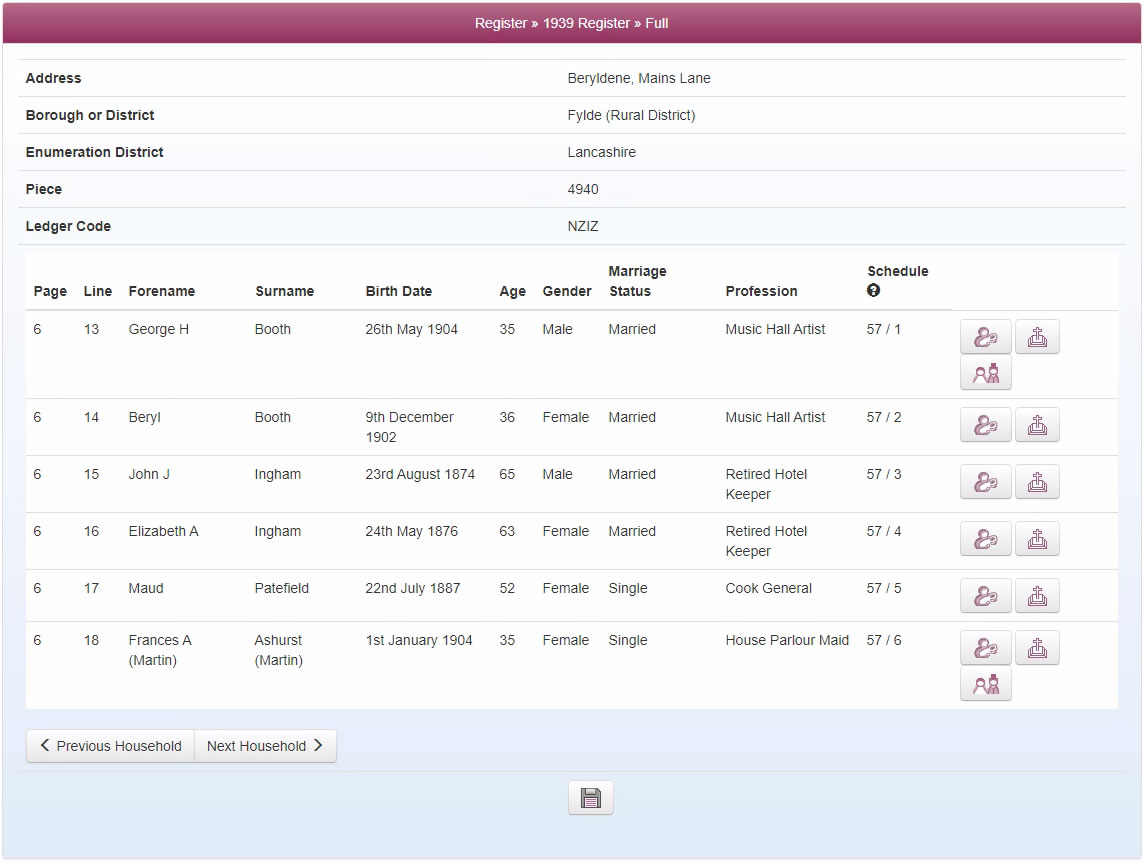 Result page for George H Booth's household in the 1939 Register

From the results page we can click the Potential Birth, Marriage or Death SmartSearch to quickly find more records for the individuals. In George Hoy Booth's case we are able to discover his birth, marriage as well as his death records in the GRO Civil Records. His birth is recorded in Wigan for the third quarter of 1904 while we can find his death is in 1961.

We could have searched for the forenames of George and Beryl and combined them with their birth dates to discover the Booth household. Using the Master Search and then by selecting to search for 'A Family' within the '1939 Register' we can check through a number of households containing this grouping of names. We can add their birth years to refine the process and this brings up the correct pair. 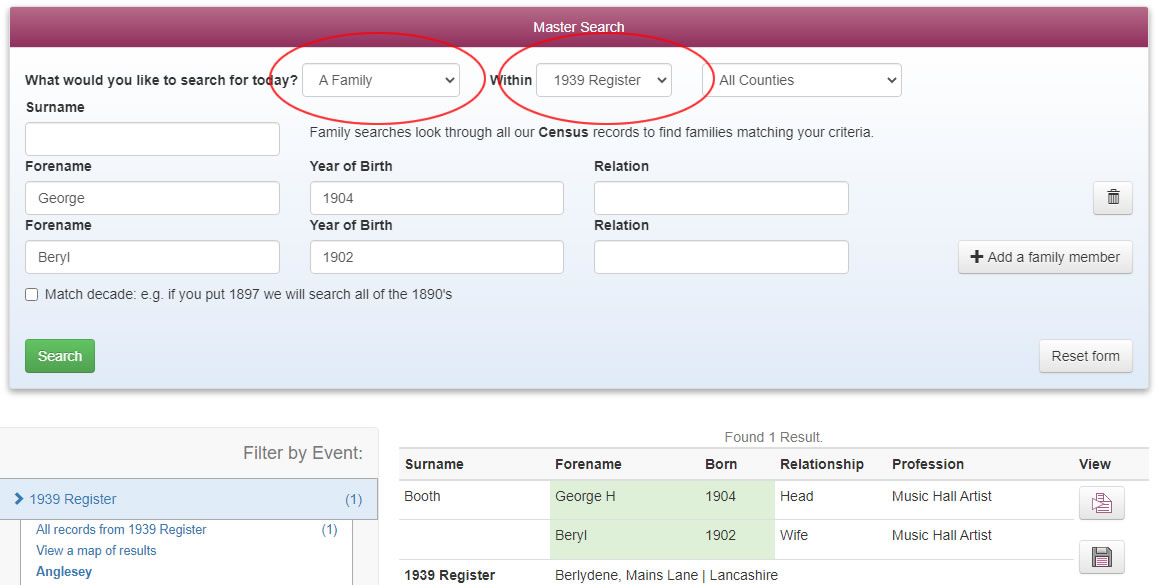 Using just George's first name, together with the county of Lancashire and then choosing the keywords of 'Music Hall Artist' returns us seven results of which George H Booth in Fylde Rural District is the correct one for George Formby.

All these powerful search tools uniquely available on TheGenealogist, including the ability to find your ancestor by using keywords, such as the individual's occupation or using their birth date or searching for an address makes researching easier. To also be able to find a family by just using forenames is extremely useful when looking for our elusive ancestors in the 1939 Register. We have demonstrated that all these techniques could be used on TheGenealogist to open the window on George Formby and his household in 1939 at a time when the war had just been declared and most of the civilian population were still not in uniform.

In 1939 George Formby made 'Come on George' which can be seen on YouTube at: https://youtu.be/6gf6bglE8Pc

Also in that year he made 'Trouble Brewing': https://www.youtube.com/watch?v=02ViMh47F1E

If you want to explore more about George Formby here he is talking about his early life: https://youtu.be/aArUU4FOwao?t=921