Finding the Wandsworth homes attacked in the WW1 'Lusitania' Riots

Homes and shops revealed by the Lloyd George Domesday Survey

In the years leading up to the First World War the political climate in Britain was moving towards the redistribution of wealth with the introduction of an old-aged pension, free school meals for children and sick pay for low paid workers. The Liberal Government of the time, headed by Prime Minister David Lloyd George had introduced 'The People's Budget' in 1909/1910. Their aim was to bring in new social welfare programmes to Britain and to pay for them the Government proposed to tax the lands and incomes of the wealthy. This required a great survey of the country between 1910 until 1915 that is known as the Valuation Office, or Lloyd George Domesday Survey. This scheme would value all the land and property of the country so that an 'Incremental Duty' of 20% could be levied on any increase in value achieved by the owner when they sold or transferred an asset after the year 1909. With this, the better off would now contribute towards the public expenditure needed to provide benefits to the wider society.

To investigate property owned or occupied by our ancestors at this time we need only to turn to the Lloyd George Domesday Survey records that are being released by areas. Linked to TheGenealogist's Map Explorer™ we can consult georeferenced historical maps overlaid over modern background maps, including Ordnance Survey, Open Street Maps and a satellite view which are tied to the same coordinates on each map. This is highly useful for seeing exactly where an ancestor's home stood even if the road has changed name over time, was destroyed by the Blitz, or has just been extinguished entirely through modern town planning. Very often by using a modern map on its own will frustrate the researcher when areas have changed in the intervening years.

We can see how this resource may be used by examining the maps and the field books that have been released for the area around Wandsworth in London. In these records we are able to discover this part of London as it was in the years immediately before the First World War had broken out.

On Friday 7th May 1915 the Imperial German Navy's U-Boats carried out an operation that shocked the world when they torpedoed and sunk the liner RMS Lusitania. The loss of civilian lives caused outrage amongst the inhabitants of Britain and perhaps it is only to be expected that the frustrated and angry residents looked for someone to direct their bile towards. Unfortunately, for some of the local butchers and bakers in the Wandsworth area, the mob vented their anger on those who were of German descent. In many cases the hapless small business owners had, in fact, become Naturalised as British. Some even had sons fighting against Germany – but this held no sway with the crowd. 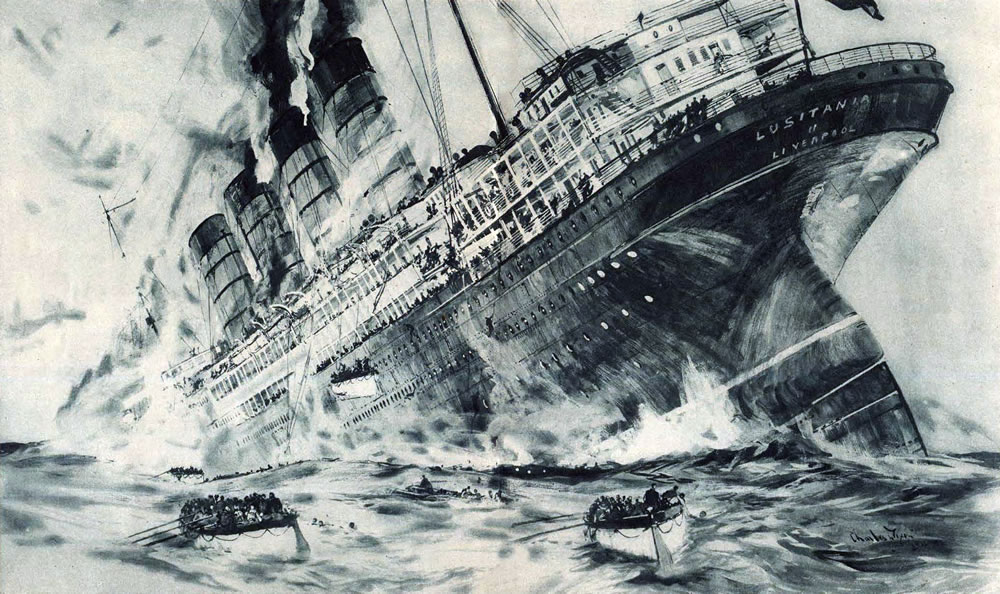 Searching the Lloyd George Domesday Survey finds that Alois Hamperl had a butcher's shop at 277 Garratt Lane. He and Peter Bleines, the bakers, had their windows smashed by bricks and stones on the Monday following the Lusitania's demise. A check of the British Naturalisation records on TheGenealogist reveals that Mr Hamperl became British on the 8th July 1907 and Peter Bleines on the 24th October 1901. Alois Hamperl was married to a Londoner and both he and the Bleines family had lived in the UK for 20 years.

We are also able to discover details of another naturalised British Subject of German extraction, Peter Jung, who was naturalised as a British Subject in 1907 according to TheGenealogist's records. He was a well established baker in Wandsworth who had invested considerably in putting up a fine building from which to cater for the population of his adopted area. 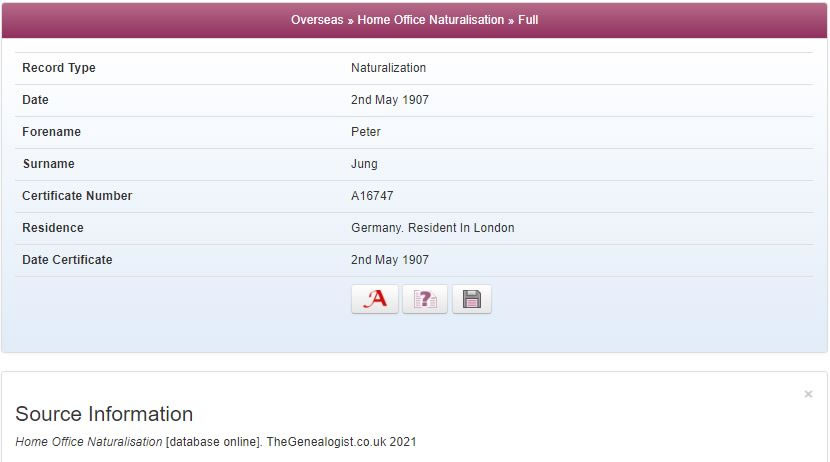 By the Wednesday night, that followed the sinking of the Lusitania, the disorder had escalated and in Tooting High Street, Wandsworth Road large crowds had gathered. Eight arrests were made by the Police and the offenders were brought before the police court the following day and fined. The baker's shop of Peter Jung, which was at 48 Tooting High Street had been wrecked with an estimated £200 worth of damage having been caused. We can search the Lloyd George Domesday Survey to find the details of Mr Jung's property in Wandsworth and see the details of his house, shop, stables and bakehouse.

The revenge that the people took on his shop in 1915 must have dismayed Peter Jung as his own son, Peter, was serving in the British Army during the First World War. Peter Henry Jung's service fighting the Germans can be confirmed as records of his campaign medals are easily found in the Military Records Collection on TheGenealogist. 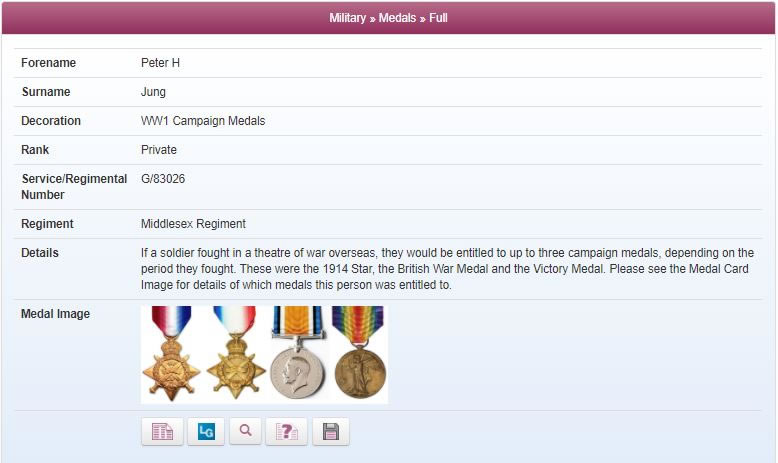 Where is Defoe Road?

Two years before the vandalisation of the shop the Lloyd George Domesday Survey had captured details about Mr Jung's property. This particular modern red brick building, with stone facings, which had been rebuilt in 1903 by Mr Jung as the lessee, attracted a fulsome description by the surveyor. The premises had a tower and was slate roofed. It was in good structural condition and was noted to be a commanding building with good trade. We are able to discover from the field book that there was a back room to the shop that was used as a tearoom, the building possessed a cement paved yard and had a 3 stall stable. The bakehouse had been fitted with three ovens and troughs and there was an electric dough mixer that was fed from the loft. 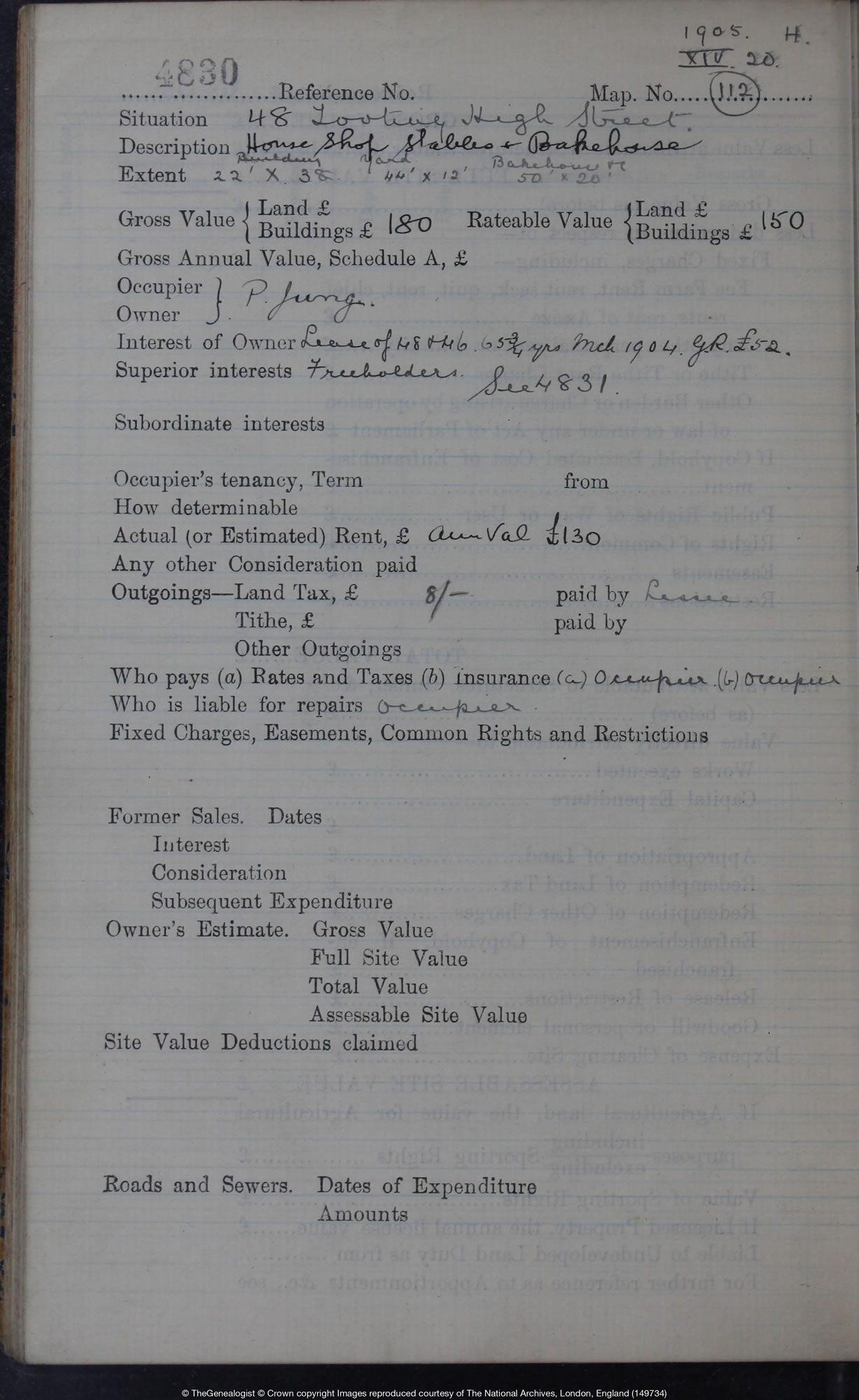 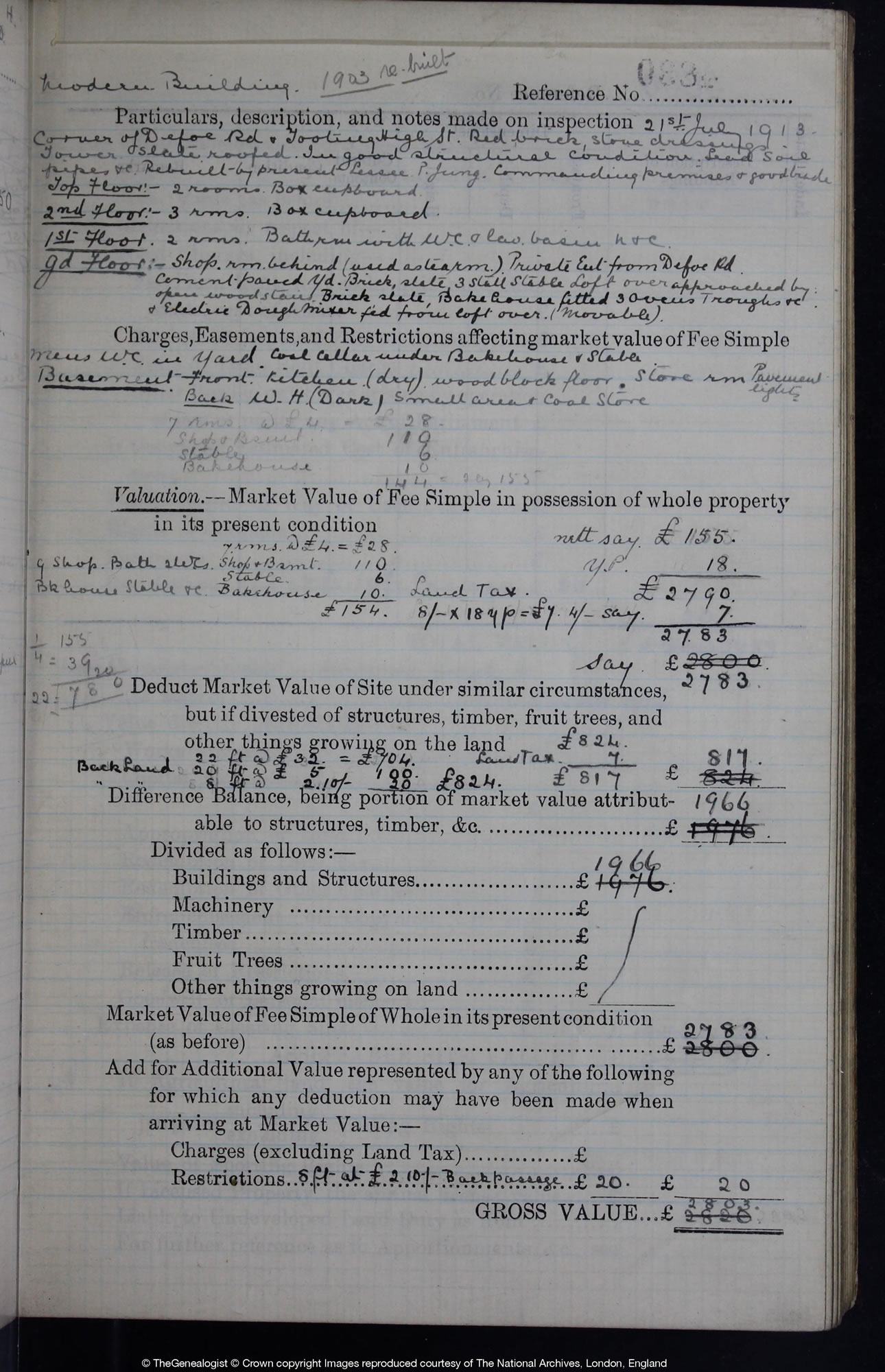 The surveyor had noted the location of the property as being "on the corner of Tooting Street and Defoe Road" with a private entrance on Defoe Road. But where exactly is Defoe Road? Today a modern map will not find us this road as over time the name has changed. By using the Lloyd George Domesday records on TheGenealogist, however, and by clicking through from the results to the period map image on the Map Explorer™ shows us the exact location with a pin on the property. By viewing the historic OS map and sliding the control to reveal the modern map we can now see that Defoe Road has become Garratt Lane and so our question is easily solved with this interface.

Peter Jung's shop had been one of the locations of the riots and the pillagers who had been caught by the police damaging his property were dealt with strongly by the courts. Meanwhile the behaviour of the jingoistic press caused Peter Jung to instruct his lawyers to write a solicitor's letter to the local newspaper. His grievance with them stemmed from their previous articles urging their readers to use British bakers in preference to those, like Jung, of German extraction.

These fascinating landholder records allow us to discover the exact location of a property in the years between 1910 and 1915, at the time of the Lloyd George Domesday survey, and may resolve what the road had been previously named, as in the case of Garratt Lane. They can also be useful when an area has completely changed through redevelopment and as such are an extremely useful set of tools for the family or social history researcher to use.

Defoe Road was probably named after Daniel Defoe who was a one time famous resident of Wandsworth. Using the Map Explorer helped to identify that Defoe road has become Garrett Lane in modern times. It turns out that the southernmost part of Garratt Lane is unusual in that two parallel streets exchanged their names in the past. The original Garratt Lane was a narrower street while Garratt Terrace, on the other hand, was the main connection to Tooting Broadway. The south-east end of this thoroughfare became Defoe Road before it reached Tooting High Street, though many people were in the habit of mistakenly calling it Garratt Lane. For this reason at some point in the past it was agreed to exchange the names of the two roads.