TheGenealogist has just released the IR58 land and property records for a swathe of North London from the Borough of Haringey. These Lloyd George Domesday Survey records for areas of Hornsey, Tottenham and Wood Green were part of the Inland Revenue's examination of the area in the 1910s and were prepared by their Valuation Offices. The records contain details of the valuation of land for the purposes of charging increment value duty under the Finance (1909-10) Act 1910. The records can be of fantastic use to the family history researcher as they normally contain the names of occupiers and owners; date of erection of their buildings as well as details of extent, the owner's interest, tenure, market value and information about such matters as liability for rates and taxes. In this release is to be found the famous White Hart Lane football ground, which was home to Tottenham Hotspur Football Club, but we can also discover the modest house of one of the founders located just a few streets away.

Today, as the ups and downs of the Euros begin to fade and England captain Harry Kane can get back to being the captain of Tottenham Hotspur, we look at the very first person to hold that privilege when this North London club was nothing more than a schoolboy eleven. Robert "Bobby" Buckle was just a winger aged 13 years old when he became team captain, but he would remain central to the club as it grew, serving as Secretary and Treasurer and then a Director when it became a Limited company in 1898.

Finding the house from the Lloyd George Domesday Survey

The first postal address for the newly registered sporting enterprise was at the house that Bobby Buckle shared with his father, White Cottage, White Hart Lane. A look at the census records on TheGenealogist reveal that Bobby was a Solicitor's Clerk and that his father worked as a Coachman. 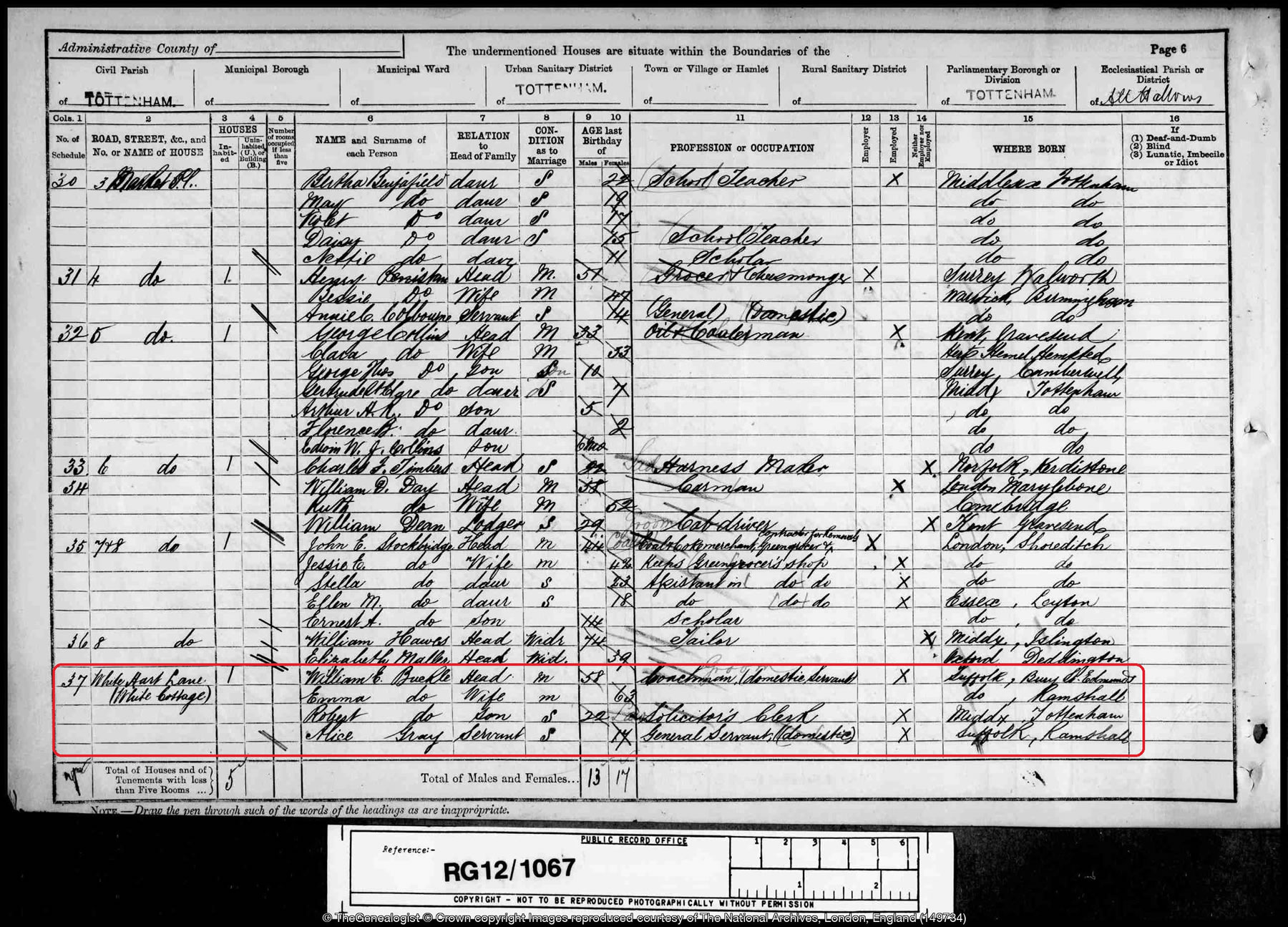 Using TheGenealogist Tithe and Landowner records to search for Robert Buckle and clicking on the bar to View the Results on a Map we can immediately see that Mr R Buckle was an owner of a significant number of terraced houses in the area close to the football grounds. A search, however, for the house of Bobby Buckle's father, the address where the football club had once been registered, we find that W E Buckle is still the occupier on the 13th March 1911 when the inspection was made of the premises. At this time, however, the house was actually owned by the executors of a Mr Joshua Pedley. 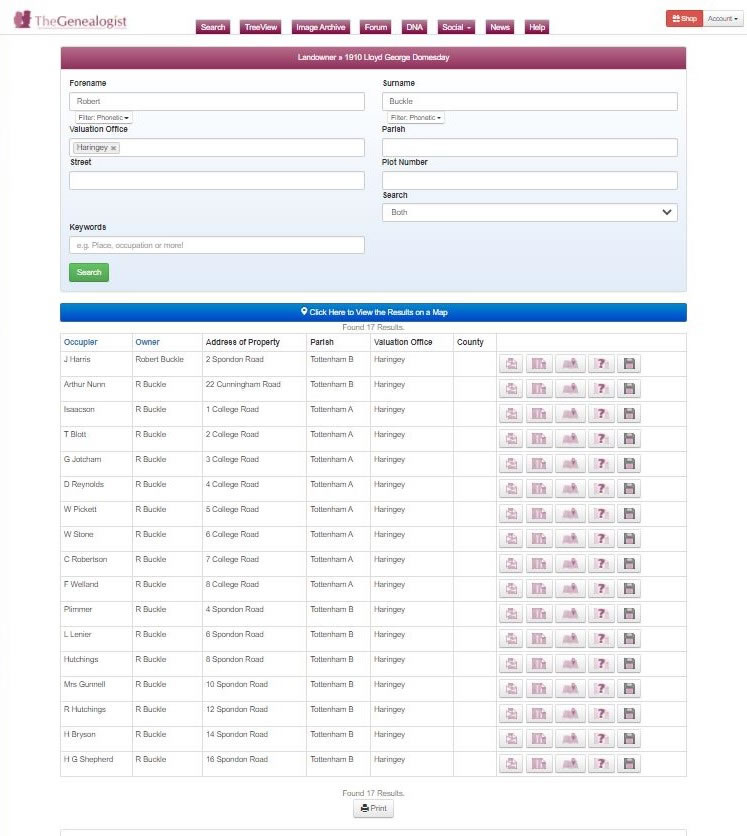 It is believed by Tottenham Hotspur that Bobby Buckle used his home in White Hart Lane as the correspondence address for the club and that this may have been the reason why the old Spurs ground became known as 'White Hart Lane', even though it was not situated on this particular road. In fact the club began playing at Northumberland Park and then moved to a location behind a row of buildings on the High Road and bordered by Park Lane. This move, to a spot around the corner from the Buckle's house, took place in 1899 when the football club began to occupy part of a disused nursery owned then by Charringtons Brewery. This land was behind their White Hart public house at number 750 the High Road, Tottenham. The club remained here until the 2016-17 season when they then moved to their current site on an adjoining area just to the North of the previous club grounds. This, as we can see from the modern map on Map Explorer™, is actually closer to Bobby Buckle's old family home on White Hart Lane (White Cottage pinned in top left of the map). 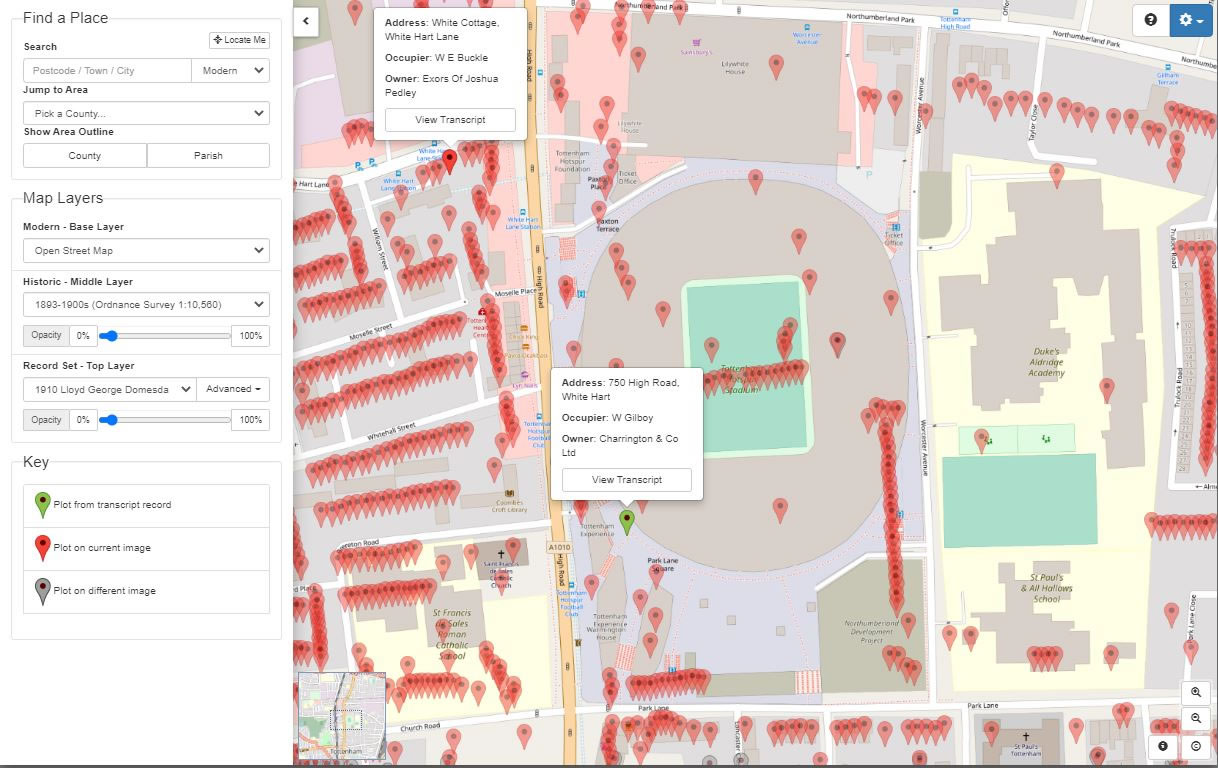 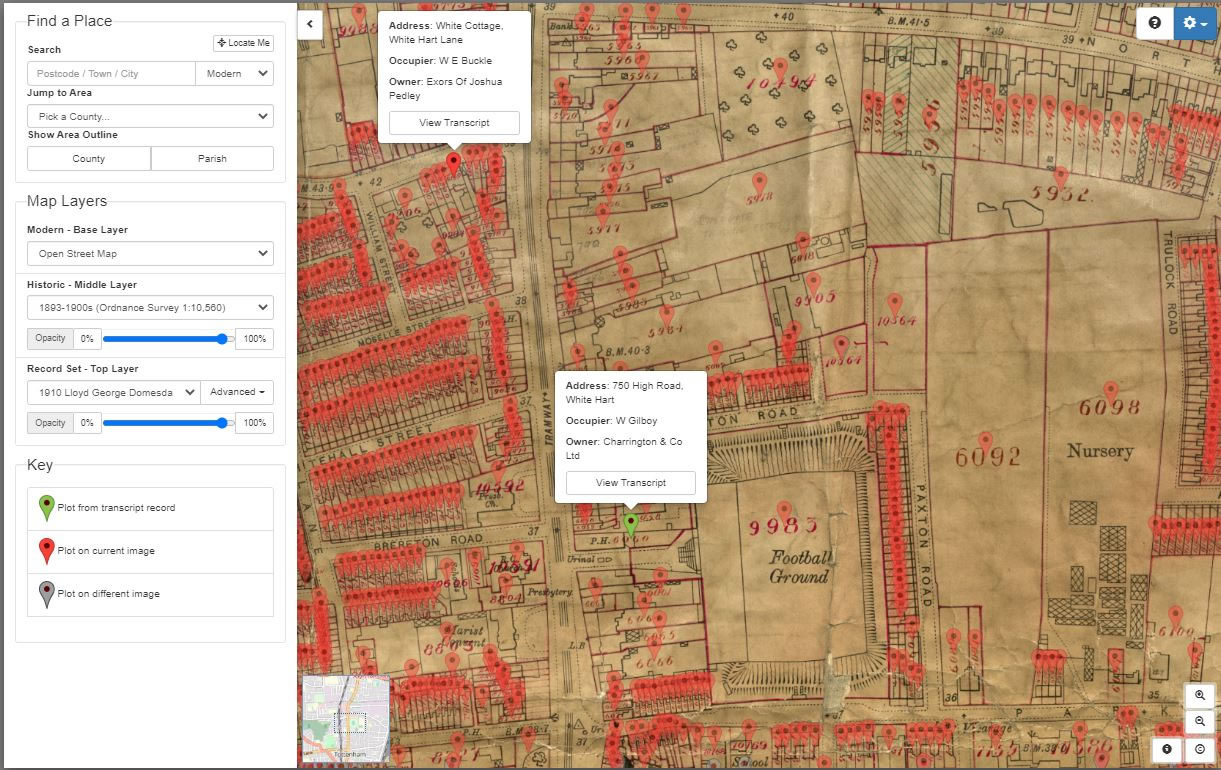 This modest house, that provided the address for Tottenham Hotspur Football Club for a time, is recorded in the field book to be a double fronted house in 'fair repair'. The details from the surveyor's field book tells us that it contained 6 bedrooms on the first floor and three sitting rooms, a kitchen, a scullery and a small backyard on the ground. 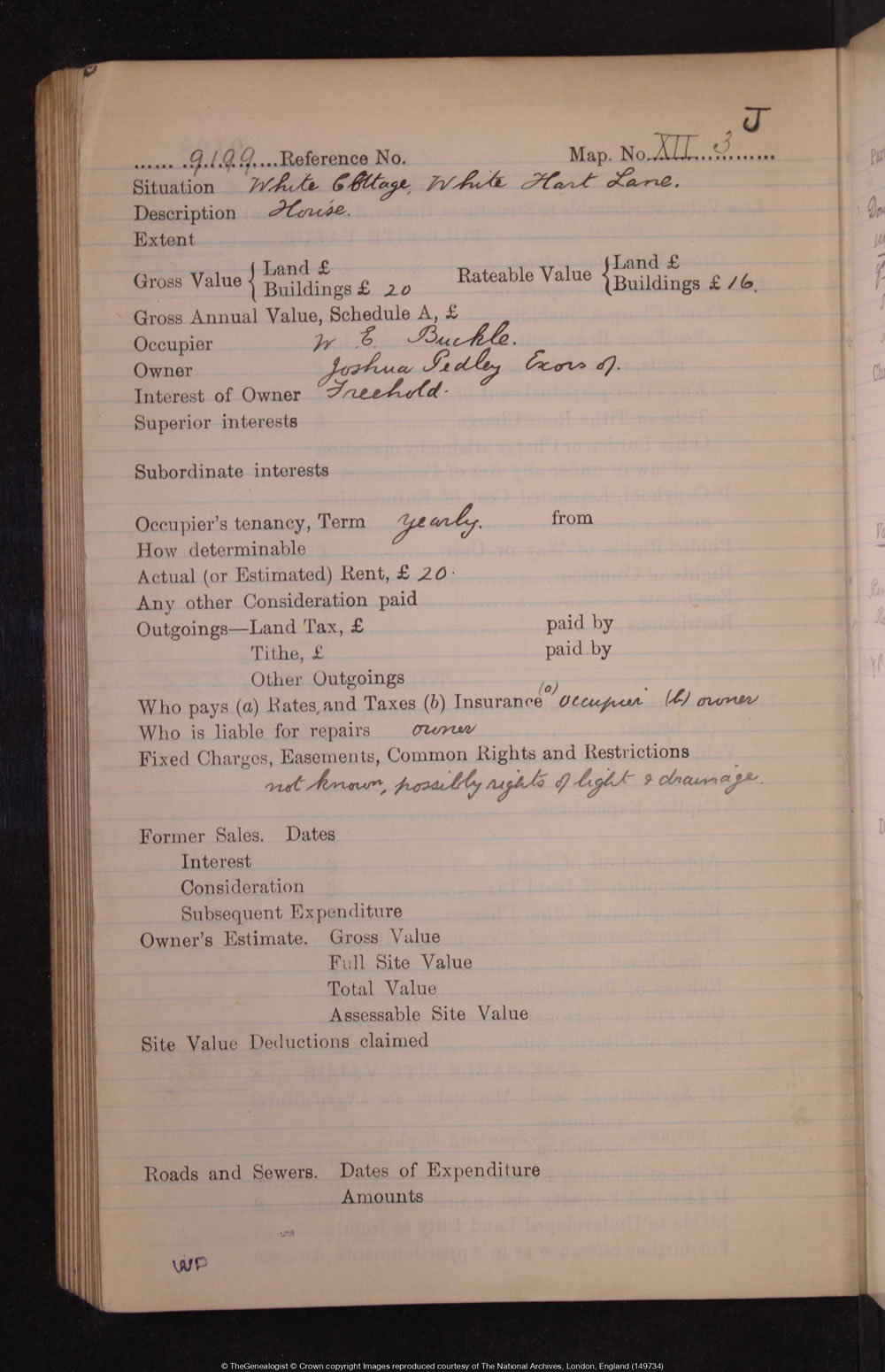 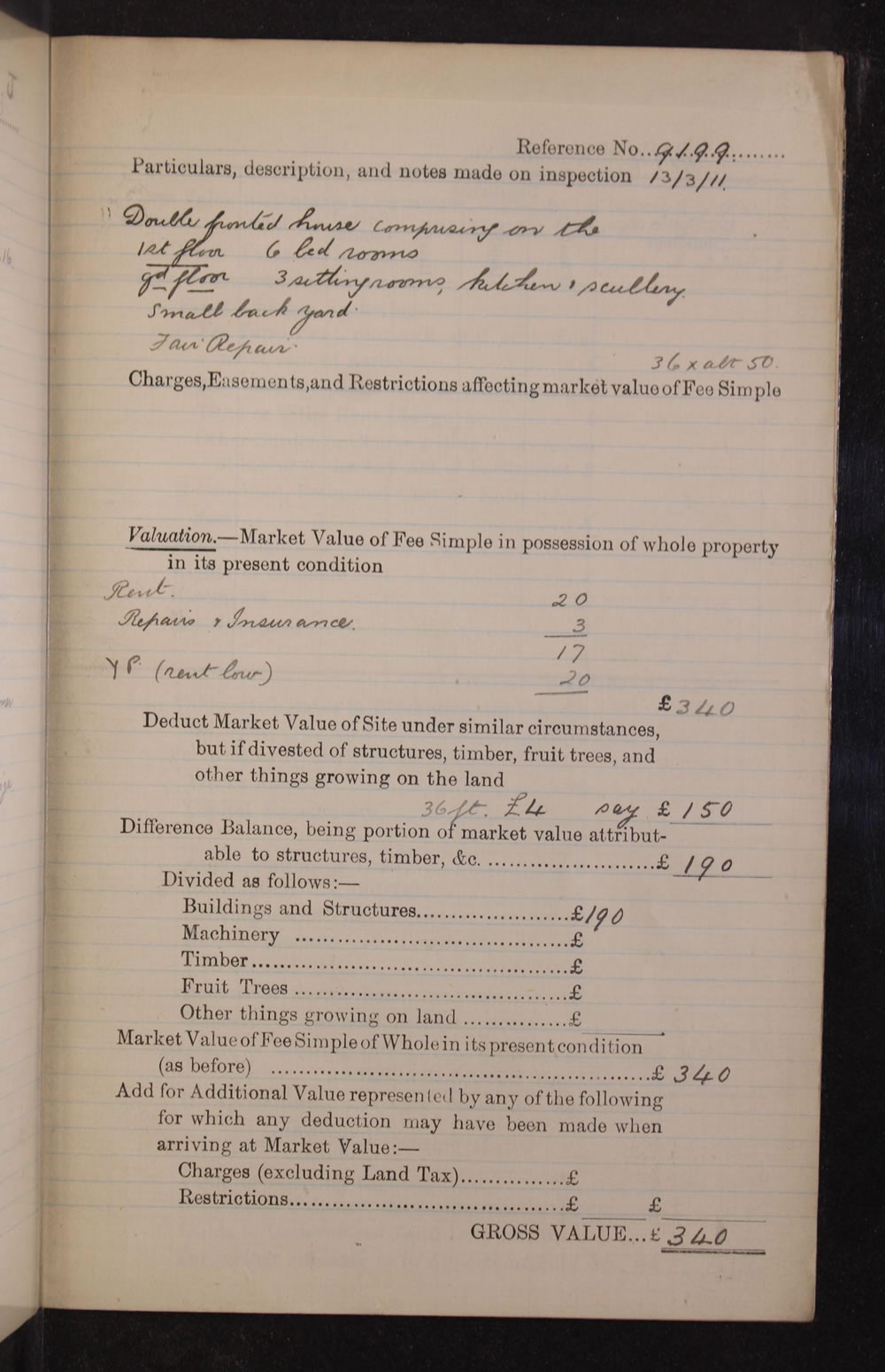 IR58 field book identifies White Cottage, White Hart Lane the address of the Buckle family. Details of the rooms reveal 6 bedrooms but no mention of a bathroom.

The Lloyd George Domesday records on TheGenealogist are linked to the large scale OS maps that were used by the surveyors and pinpoint the actual property plots on the map. Viewing the Lloyd George Domesday large scale OS map records, using the Map Explorer™ to examine the area, we can see that the Buckle's White Cottage is actually on White Hart Lane while the Football Ground that would become known as this was very definitely not. 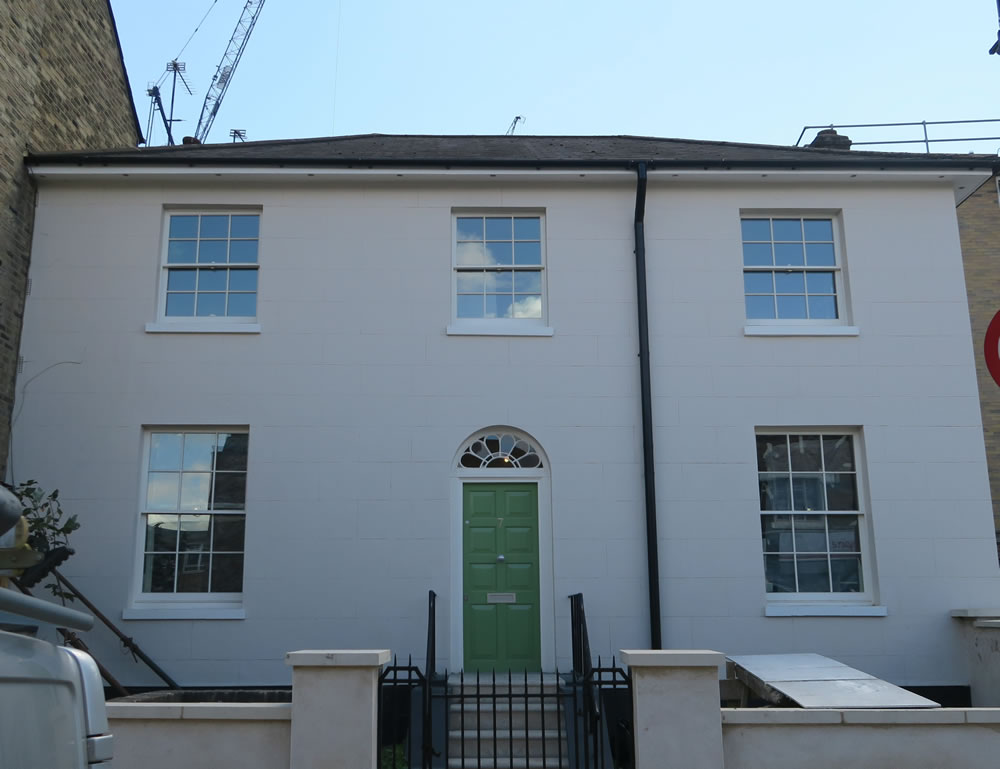 The football grounds are situated behind the buildings on High Road in the 1910s and we can also see, marked on the map at 750 High Road, the Public House. It was here that a previous landlord earned a part of his living as a nurseryman and had grown produce in the rented nurseries behind his pub. Now this disused nursery would be rented by the growing football club as it moved from Northumberland Park. By clicking on the pin to view the transcript we can see that the White Hart was still in the ownership of the brewers Charrington & Co Ltd in 1911.

The ground also shared the address of 750 High Road in the Lloyd George Domesday Survey and this would eventually become the registered offices for Tottenham Hotspur, thus we have been able to identify the first registered address at White Cottage and the one that followed years later. If we click on the pin over the Football Ground we see that by 1911 Tottenham Hotspur now owned the freehold to their ground. A few years later, in 1921, the club also purchased the building number 748 High Road, which is recorded as a restaurant in the IR58 records and can be seen is situated next door to the public house. Eventually number 748 would then become their club address. It is perhaps fitting that the redeveloped Tottenham Hotspur home has moved just a bit closer to Bobby Buckle's ontime family home, while still occupying the footprint of the grounds that he would have known and loved. The misnaming of the grounds as 'White Hart Lane', however, is consigned to history as the new home of Spurs is today called the Tottenham Hotspur Stadium. 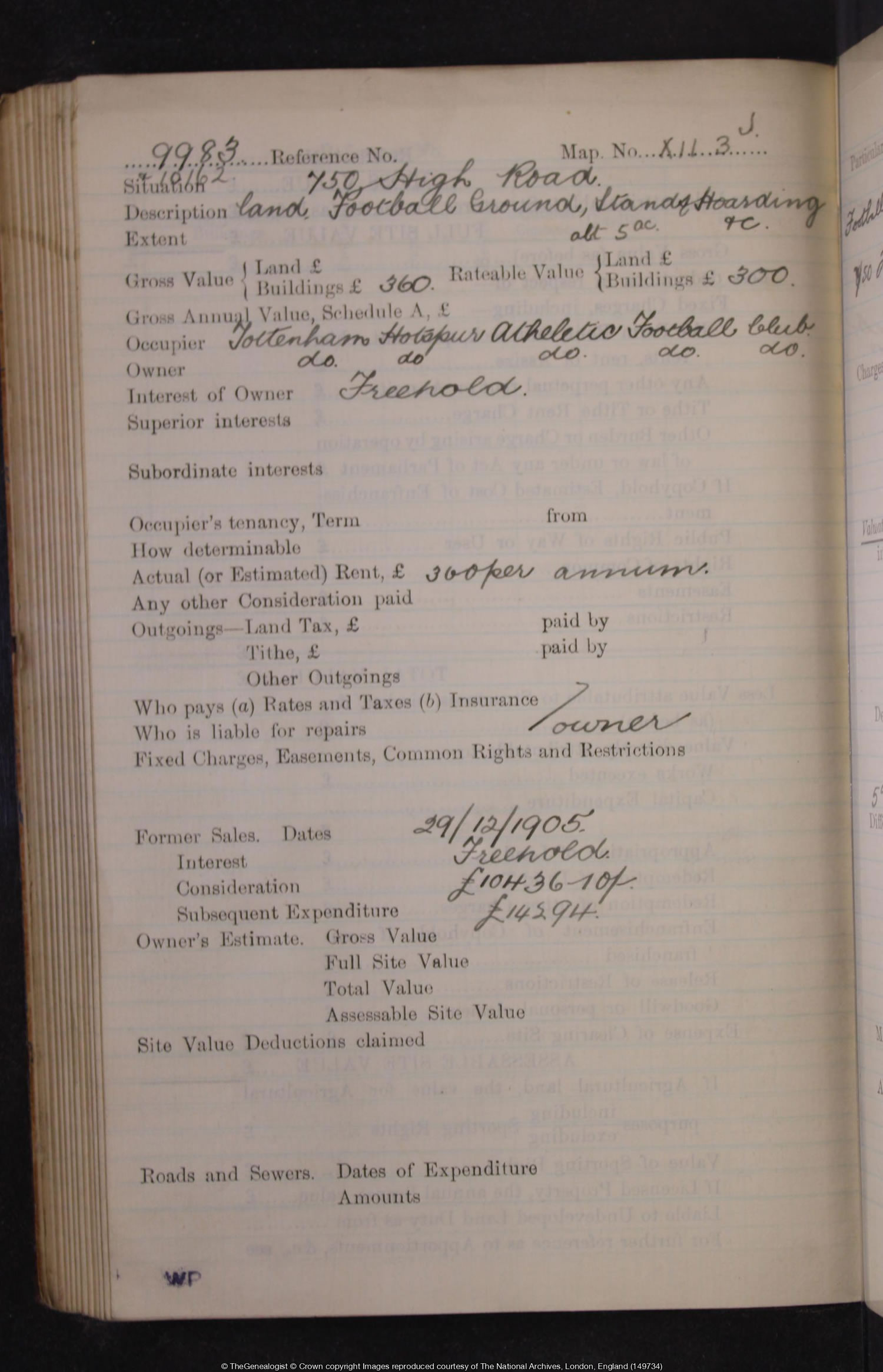 As for Bobby Buckle, the 1911 census tells us that he had moved to Mitcham in Surrey. He would still be recorded there at the time that the 1939 Register was taken just before the Second World War when he was now 70 years of age. The Lloyd George Domesday Survey, along with the variety of other useful records on TheGenealogist can open up a wonderful insight into where an ancestor lived and the environment all around them. In this case we have been able to read the details of a north London cottage to understand that it had six bedrooms and three sitting rooms, but no mention of any bathrooms. We have seen its proximity to the football field that played such a large role in the life of one of its inhabitants and been able to use the Map Explorer ™ to see how the new stadium has subsumed not only the old grounds but some of the streets of houses that once stood around it. 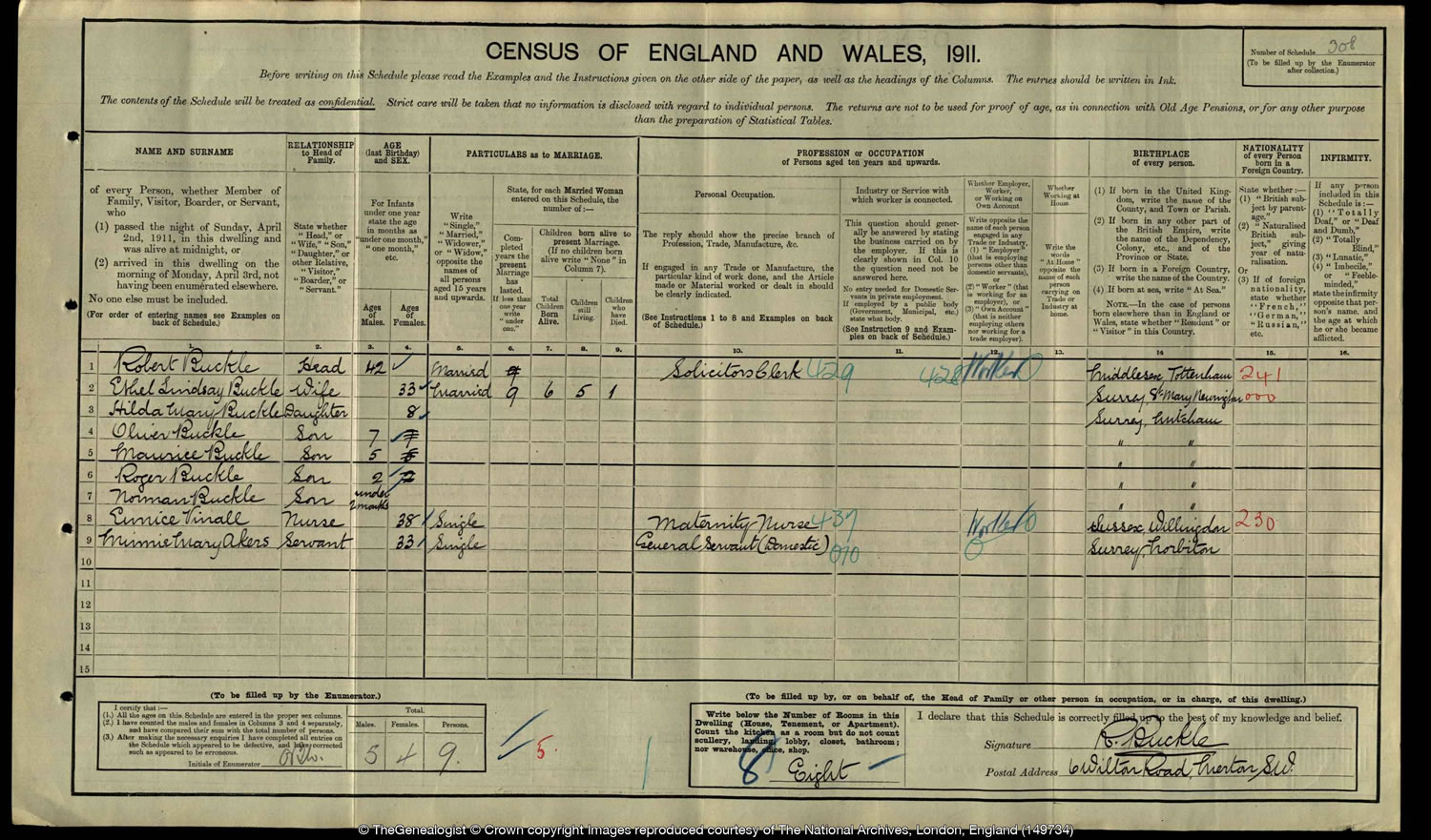 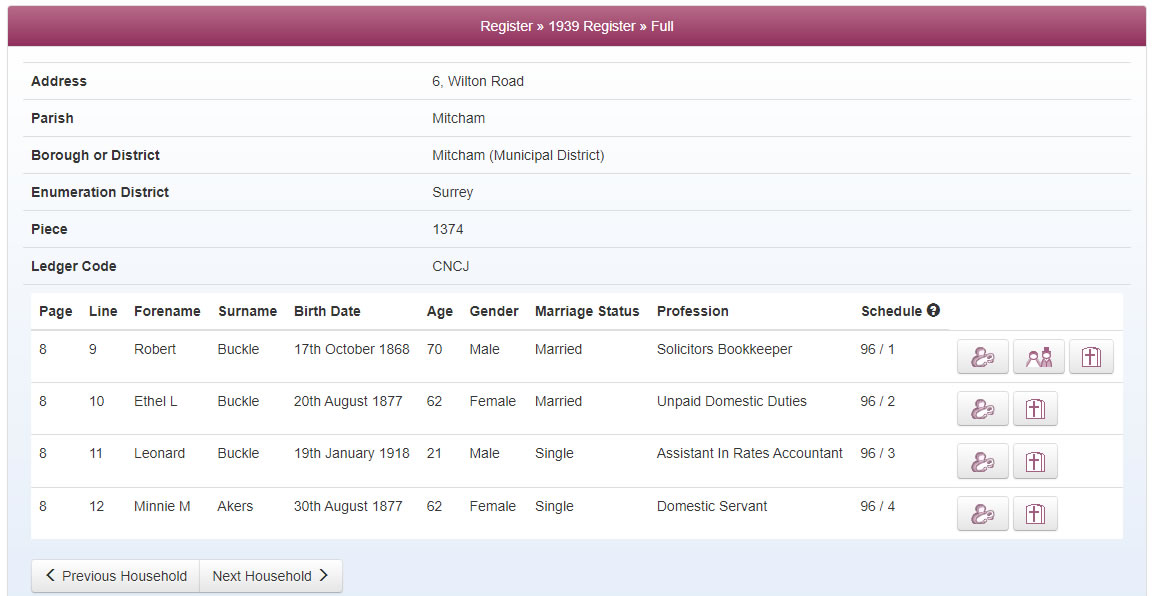