The joke often leveled at family historians is that we spend our time digging up our dead ancestors. While the majority of us would never go that far, a chance to look at our forebears' graves, and to read the inscriptions that are hopefully still visible, is enticing to us.

We can't always visit the cemeteries or churchyards where they are interred, even in normal years without lockdowns and travel restrictions, because our ancestors may have been buried some distance away from where we live. So the chance to search the International Headstone Collection on TheGenealogist is welcomed when it includes a graveyard that includes one of our ancestors. With more photographs of headstones being regularly added to the collection, which are then transcribed to allow them to become fully searchable, many fascinating discoveries can be made. 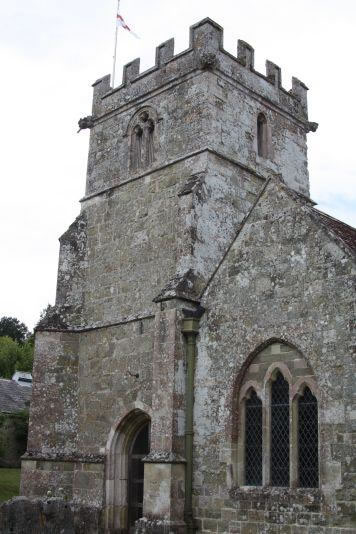 In Compton Chamberlayne in Wiltshire, stands the grade II listed church and its churchyard. The Church of St Michael was built at the end of the 13th century in the Early English style, at the same time as Salisbury Cathedral some seven miles away. Additional work was carried out on the building in the 14th and 15th centuries, with a restoration taking place in 1877.

The church being so close to their home it comes as no surprise that it contains the Penruddocke family vault. The inscription that we can read gives a great example of how these commemorations can sometimes provide the researcher with a family tree stretching back centuries. In the Penruddocke's case it reaches back to 1598. 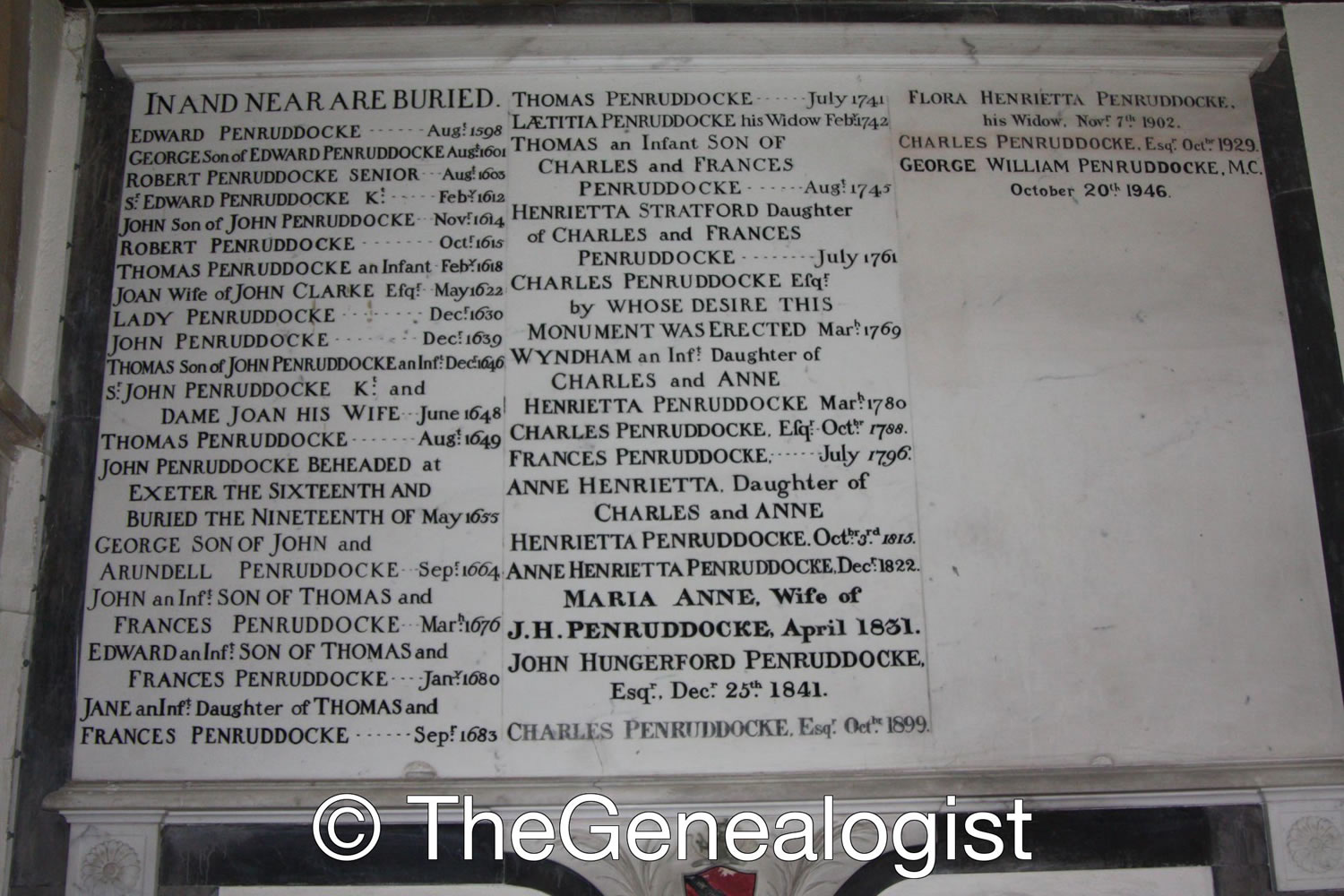 The Penruddockes buried in St Michael's, Compton Chamberlayne from the 16th century to the 20th.

The earliest member of the family on this memorial is Edward Penruddocke, High Sheriff of Wiltshire in 1597. A search of TheGenealogist's Peerage, Gentry & Royalty records enables us to find the Wiltshire Visitation of 1623, where the family is recorded as Penruddock. It is the case, as with many of our own ancestors, that the spelling of their surname in records can change slightly. For the Penruddockes, the name sometimes included an 'e' at the end in various documents and sometimes it did not. 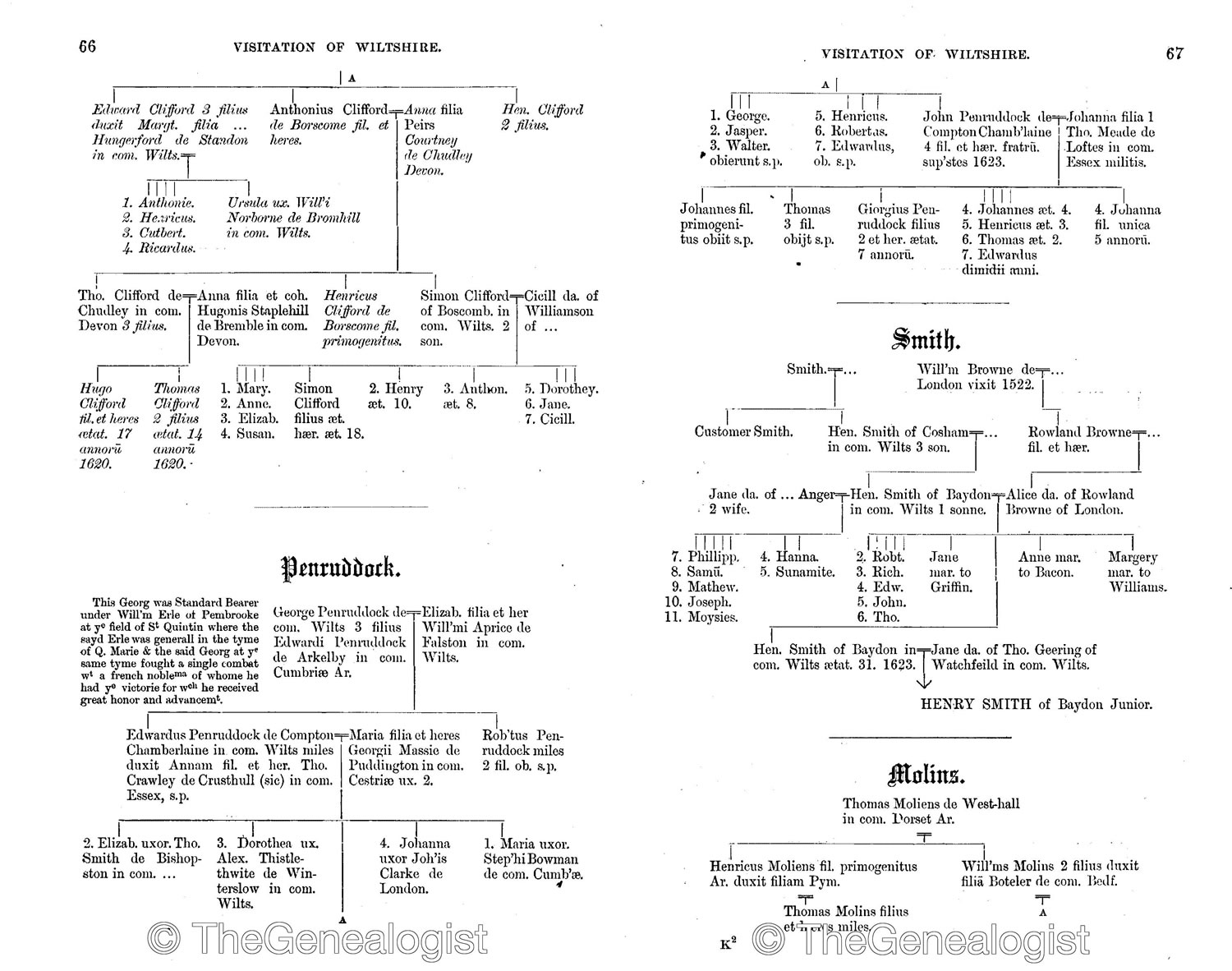 The most fascinating of entries on the funeral etching at Compton Chamberlayne is the one that indicates that John Penruddocke was 'beheaded at Exeter'. With this intriguing snippet we are able to dig deeper by researching this particular Penruddock in TheGenealogist's Occupational Records where we find an entry for him in The Dictionary of National Biography Vol XV.

PENRUDDOCK, JOHN (1619–1655), royalist, born in 1619, was the eldest son of Sir John Penruddock, knight, of Compton-Chamberlayne, Wiltshire. He was educated at Blandford School, matriculated from Queen's College, Oxford, on 20 Jan. 1636, and became a student of Gray's Inn in 1636 (Foster, Alumni Oxon.; Gray's Inn Register, p. 211). In 1639 he married Arundel, daughter of John Freke of Ewerne's Courtenay and Melcombe, Dorset. Sir John Penruddock was high sheriff of Wiltshire by the king's appointment in 1643–4, and his sons fought on the royalist side throughout the civil war (Black, Oxford Docquets, pp. 130, 222)...

"...Penruddock was condemned to death, and was beheaded at Exeter on 16 May 1655, in company with Colonel Hughe Grove." 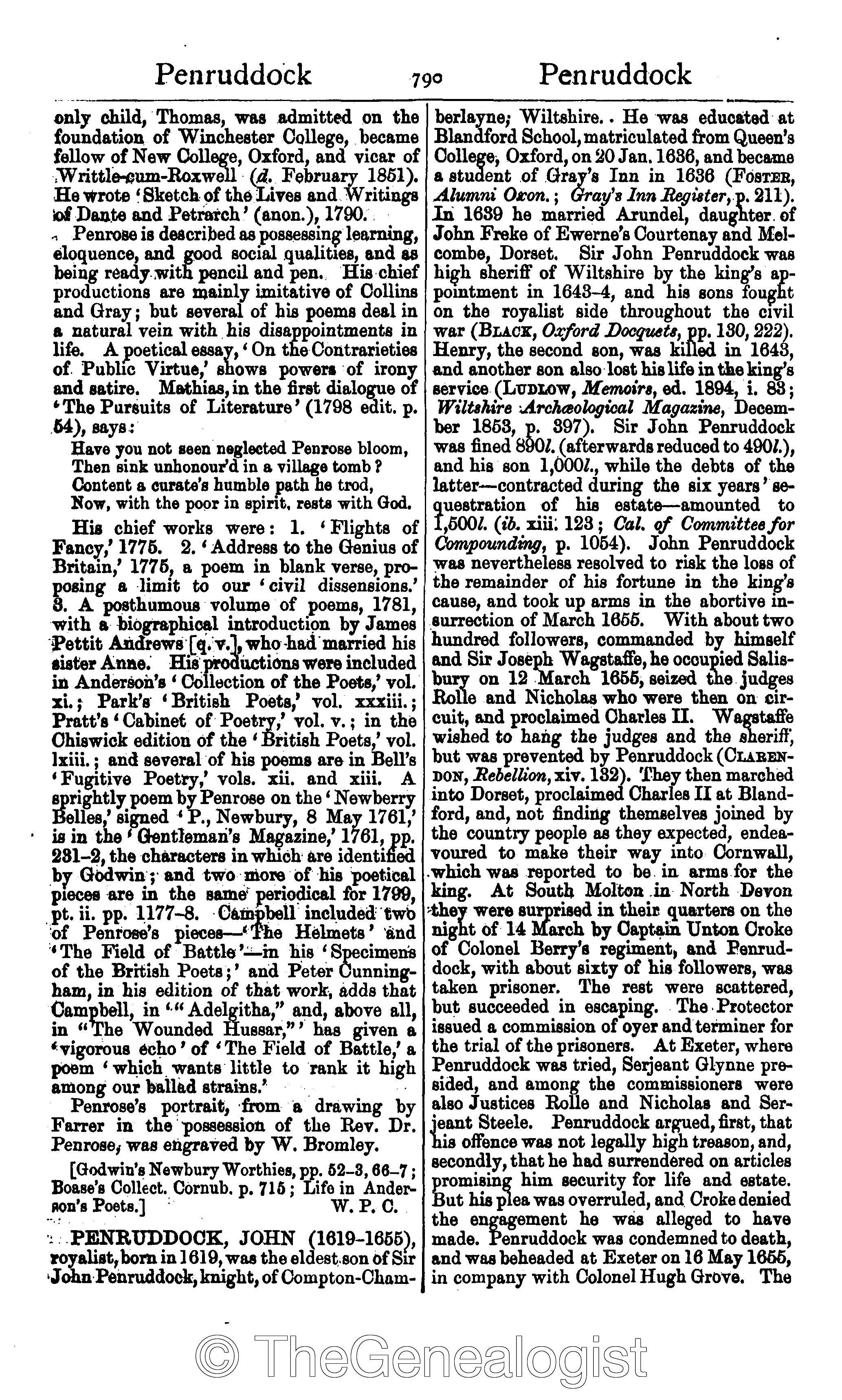 The Dictionary of National Biography having drawn our attention to John becoming a student at Gray's Inn in 1636, we can then go on to find his entry for May of that year, as well as that of his father who entered in March 1609, in the Gray's Inn Admission Register that is to be found in the Educational Records on TheGenealogist. From this record we can conclude that the Penruddocks had been tutored to be lawyers as they were pupils of the Inns of Court who would then be called to the English bar as barristers. 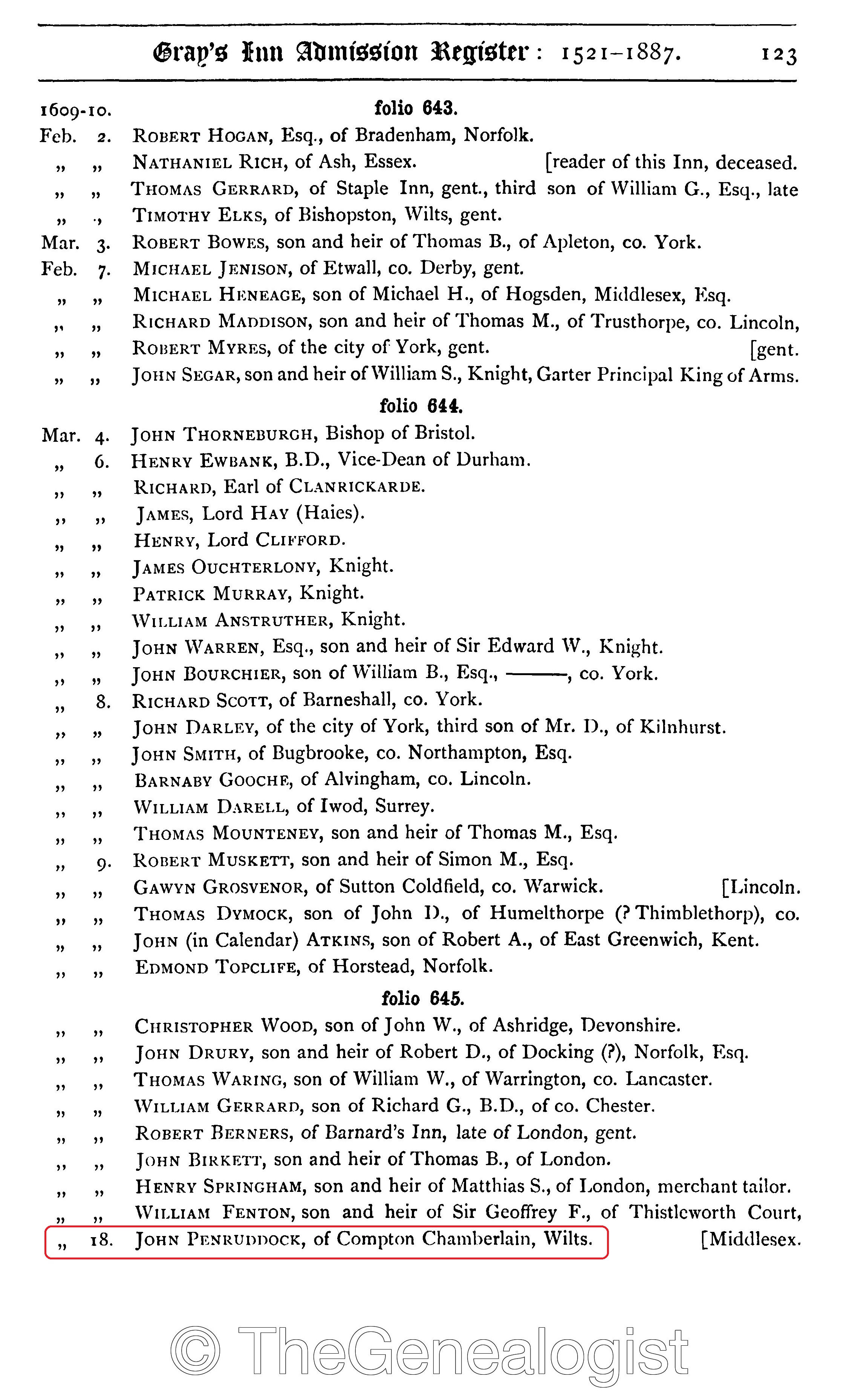 Sometimes, when a family member is lost in foreign lands and buried there, they may still be commemorated on a headstone, or on a plaque within their home church. Fast forwarding through the years to the time of the First World War we see two siblings who lost their lives at this time remembered inside the church. The conflict had claimed the two brothers, Charles and Thomas Penruddoke and so their names are recorded by their family near to where their ancestors lie, in the knowledge that these two soldiers were unable to come home to be buried. 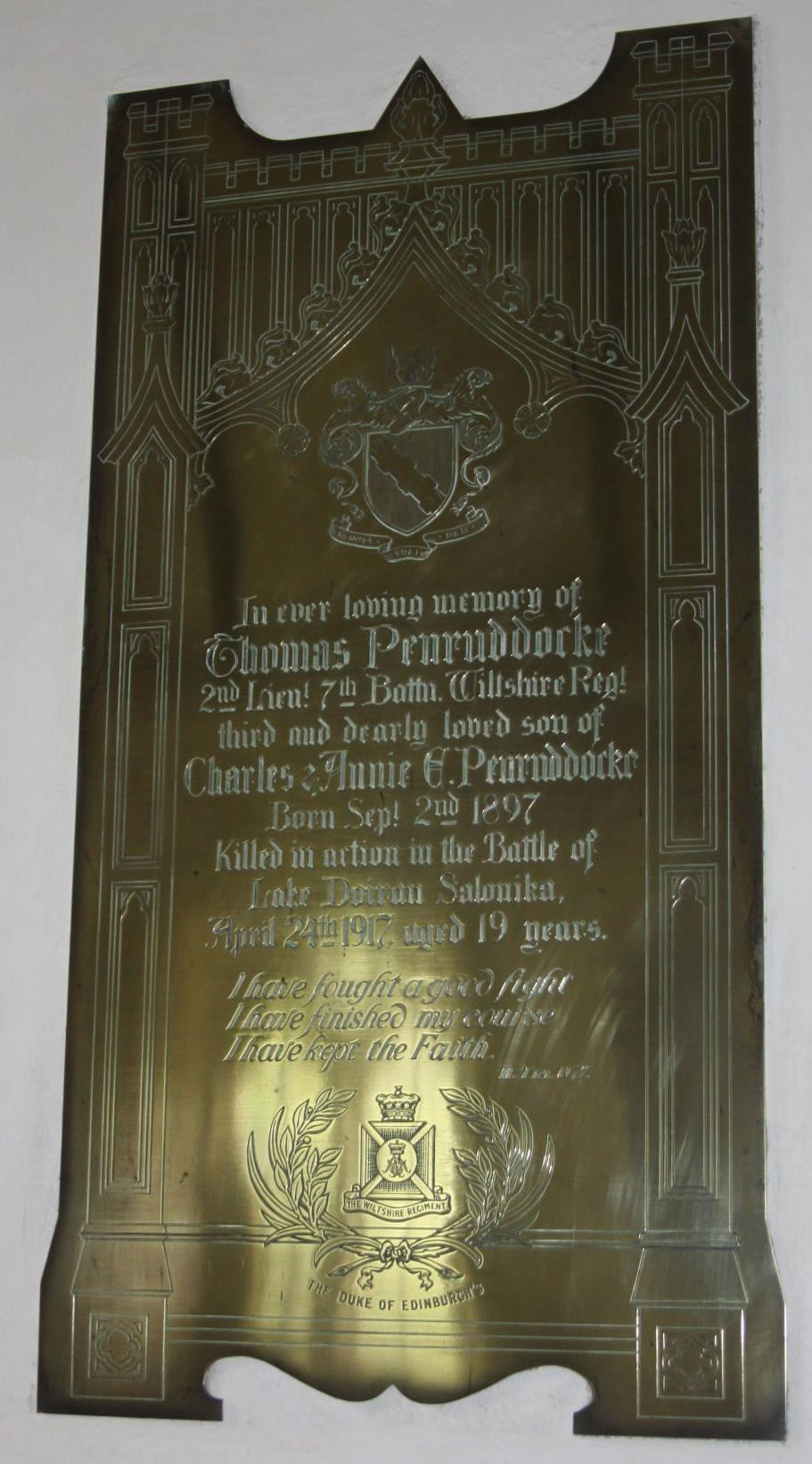 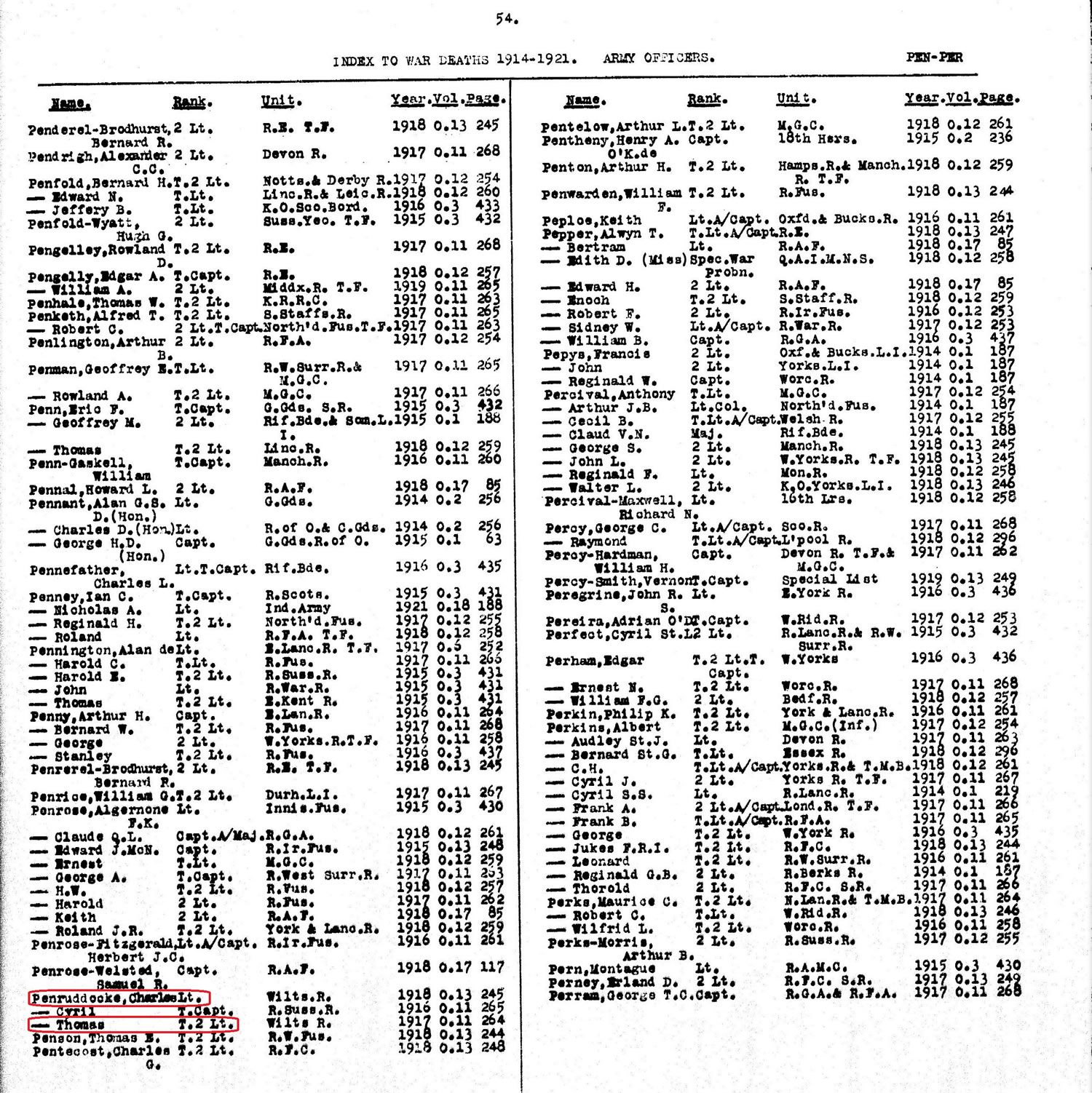 Both brothers on the same page of the GRO Index to War Deaths, Army Officers 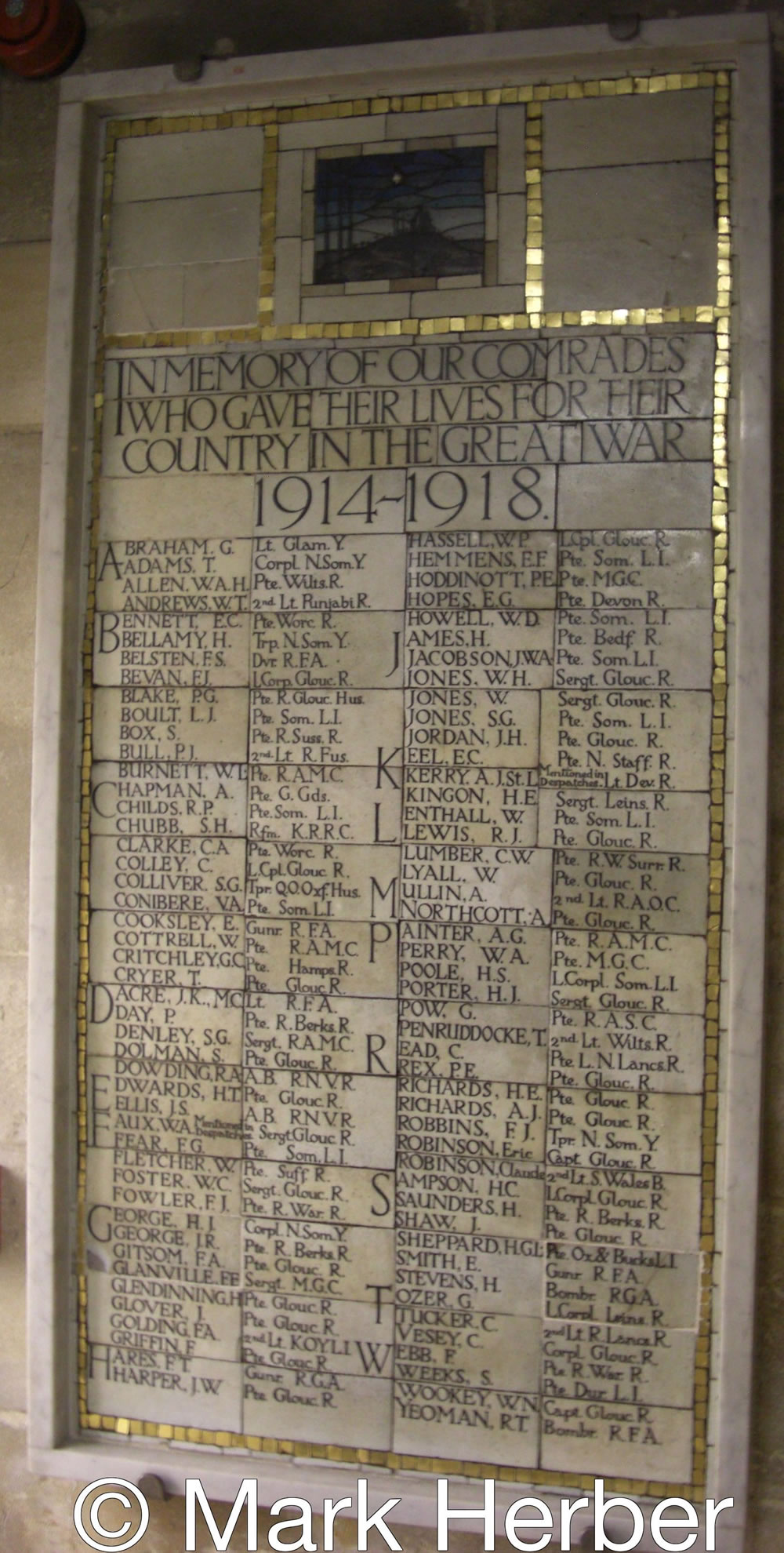 We are able to find their overseas deaths in the GRO indexes on TheGenealogist. Thomas Penruddocke can also be found listed on a war memorial inside the Church of St Mary Redcliffe, Bristol as one of the former employees of E S and A Robinson Ltd, Printers of St John's Road, Bedminster, Bristol. This War Memorial is one of many that can be searched by name of an ancestor on TheGenealogist as part of its Military Records Collection and, in this case, provides the researcher with a lead as to where and what Thomas's peacetime employment had been.

Another example of a war memorial is from within the church back at Compton Chamberlayne. Here, both Charles and Thomas appear at the top of St Michael's WW1 Roll of Honour of fallen parishioners. 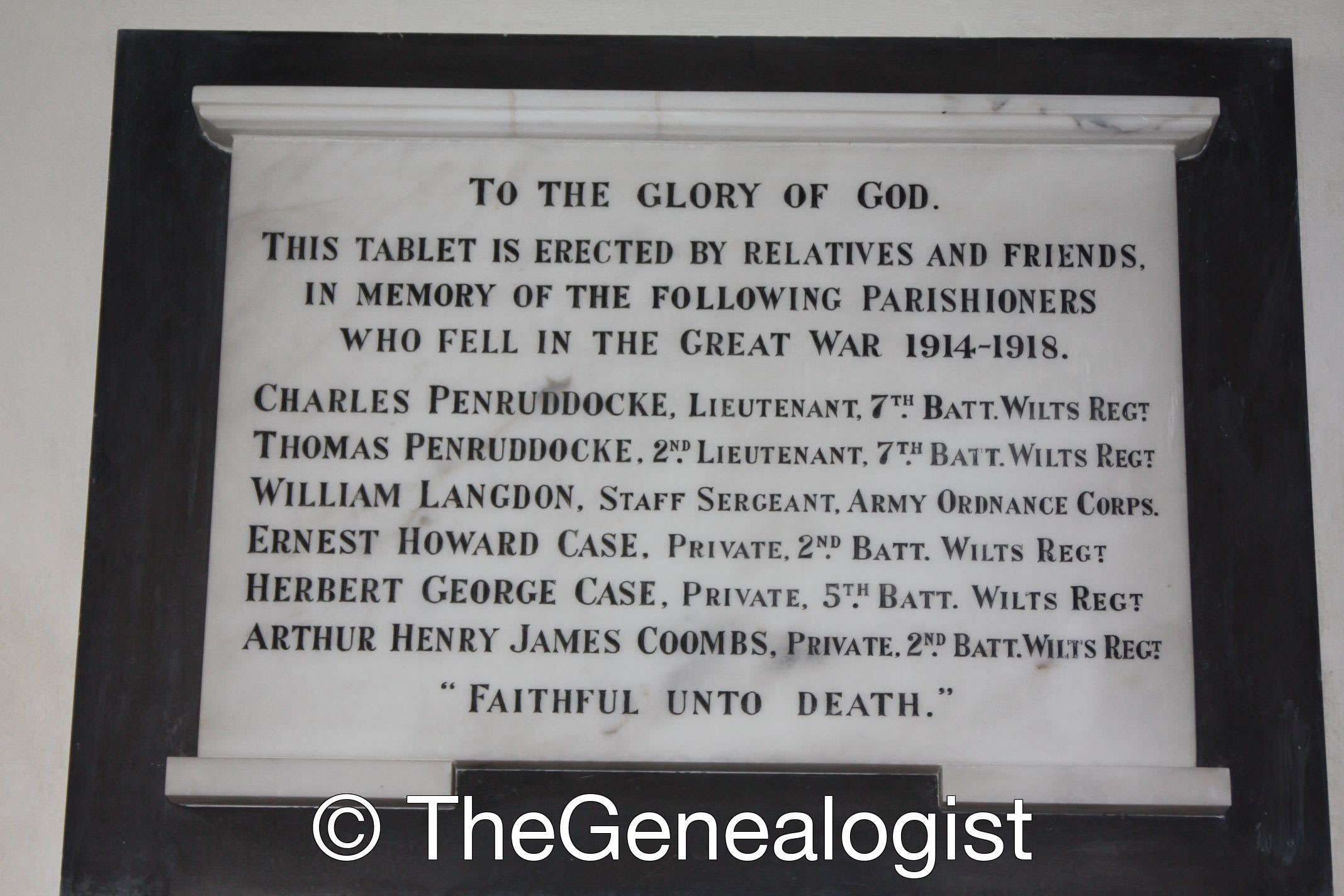 Having established that an ancestor fought in WW1, either from a headstone or a memorial plaque, another record that should be looked at are the Campaign Medal Cards on TheGenealogist. The Pip, Squeak and Wilfred were the affectionate names given to the three WW1 campaign medals which were the 1914 Star or 1914-15 Star, the British War Medal and the Victory Medal. In the example for Charles Penruddocke, that is reproduced here, we note the army administrators have marked the document with K in A 4.10.18, to denote Killed in Action on the 4th of October 1918. They also tell us that he had been in the Greek and French theatres of war. 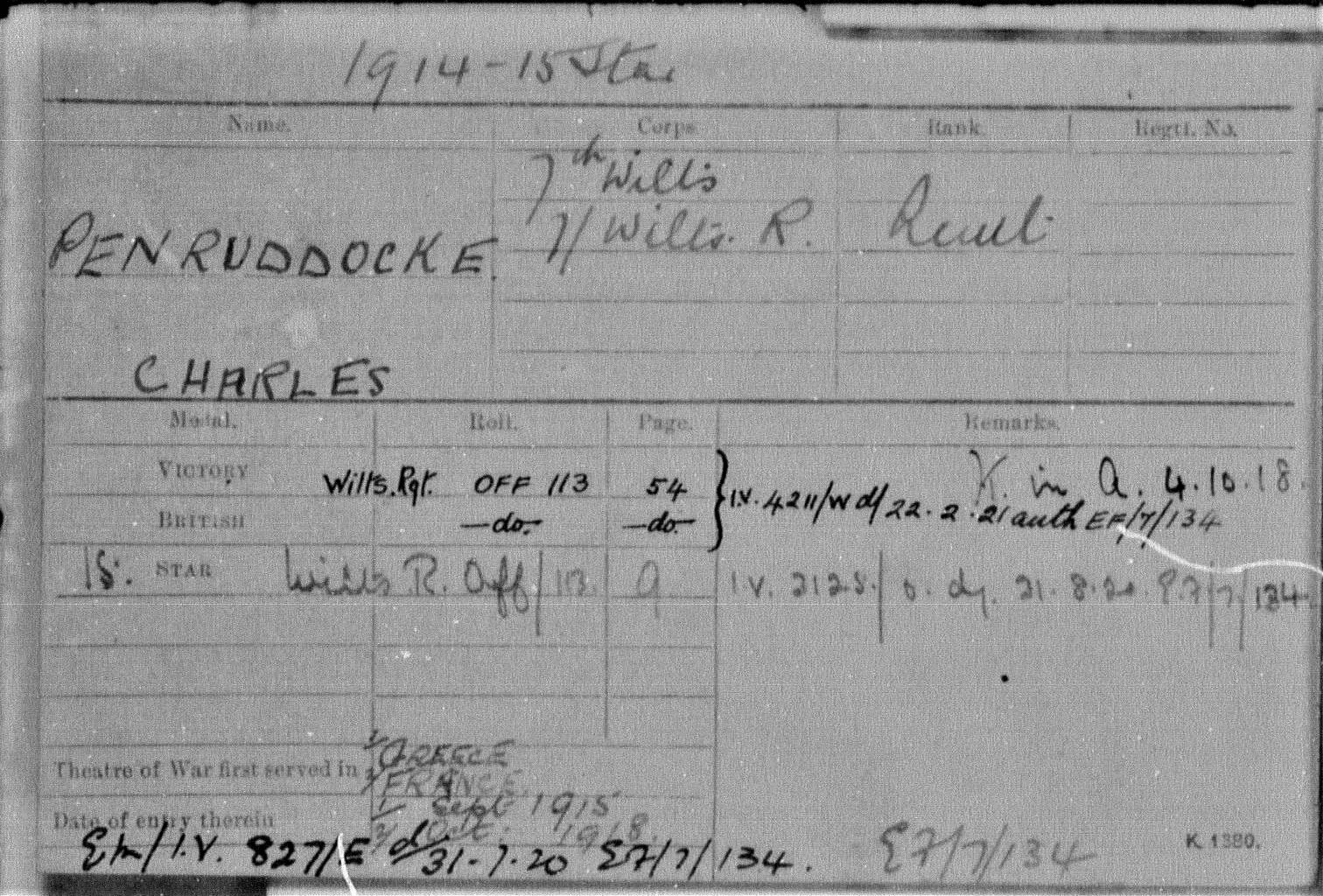 With this date we can also turn to the Casualty lists on TheGenealogist and see that The Times of October 22, 1918 published his name under those that had been killed earlier in the month.

From the names and dates carved on a headstone, or a death memorial inside a church, the family historian can then go on to discover yet more about their ancestors by using the clues from the epitaph to then search for them in other records. Here we have found a number that are quite diverse from reports of why one was beheaded to one which told us the theatres of the First World War that another had served.