Keeping it in the Family - The Tale of Land's End

Land's End, one of the most famous iconic landmarks of the British Isles, was once just an exposed point farmed by hardy Cornishmen. The desire by tourists to visit this most south-westerly point in mainland Britain would have been an excellent opportunity for the landowners to make an extra income over and above what the cliff and furzeland could produce especially when the railways began to bring visitors in increasing numbers to the peninsula.

Examining the area with the help of TheGenealogist's Map Explorer™ we are able to use the georeferenced modern and historical maps to see how today the A30 takes the 21st century sightseer all the way from London to Land's End in a road that runs 284 miles from the capital city to the carpark at the attraction. 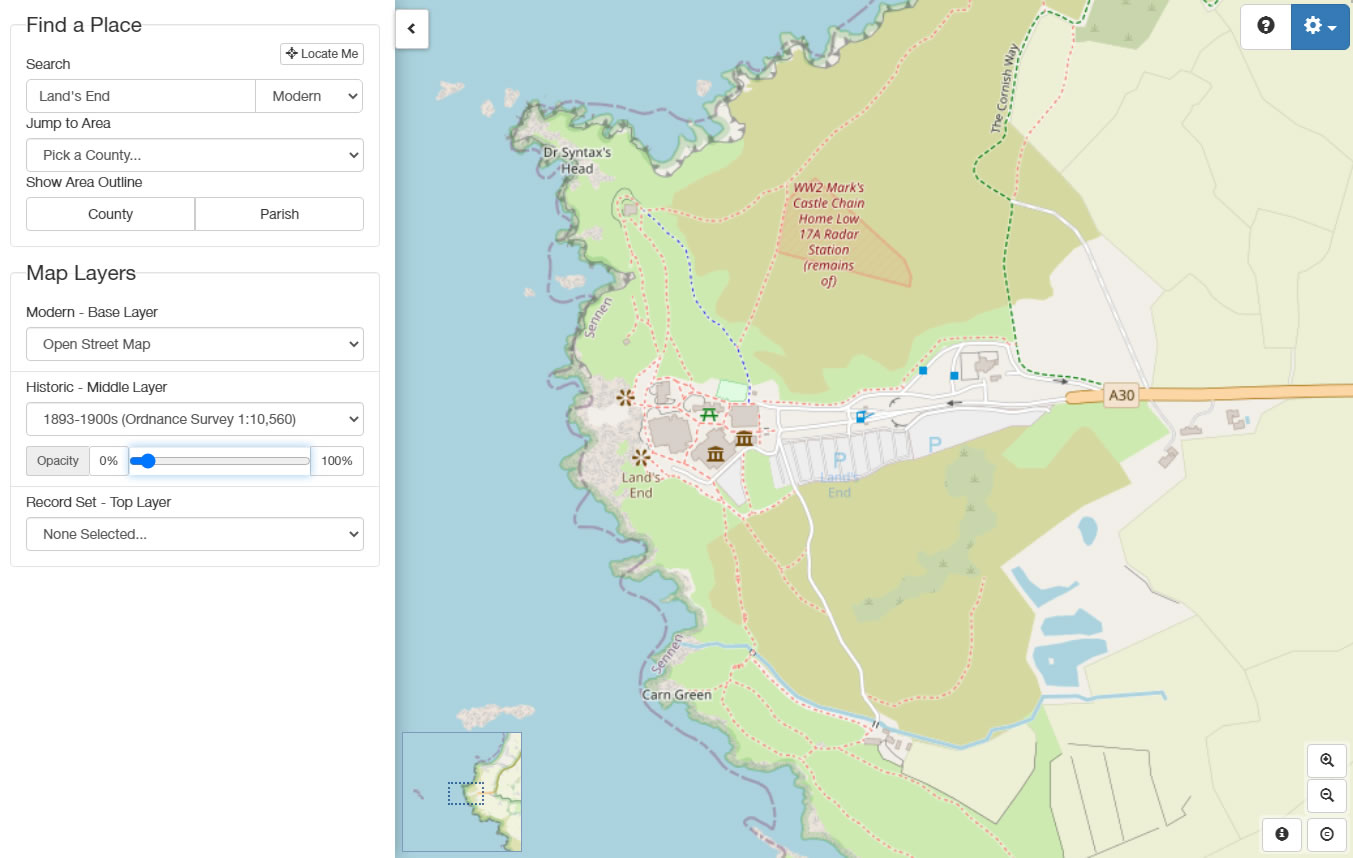 With the aid of the 1893-1900s historic map we see the visitor attraction when it consisted of a few buildings such as the hotel, temperance inn and a tea-room at the end of a track. 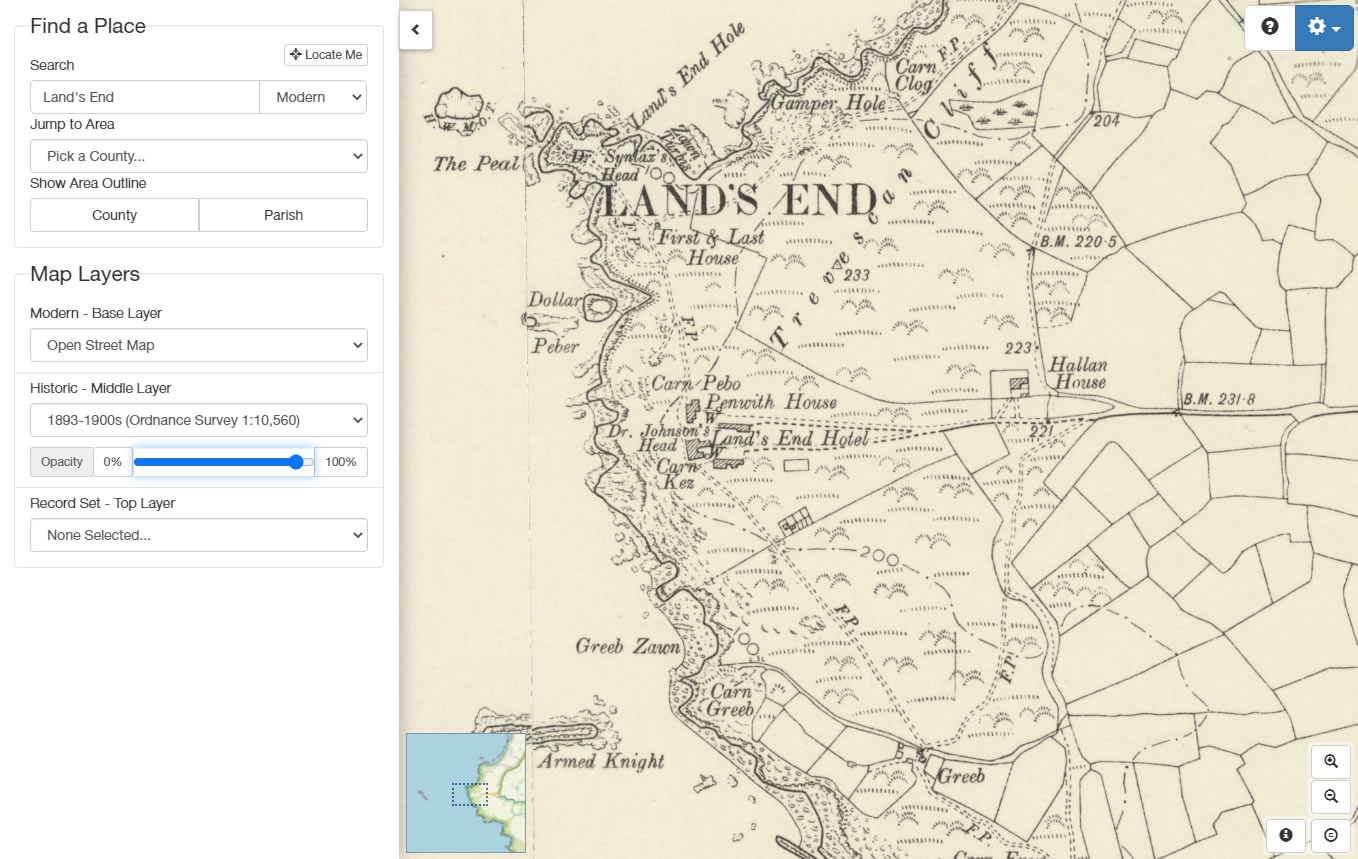 More recently with the addition of the Cornish Tithe Maps to this extremely useful mapping tool, we can now see the names of the owners and occupiers who were responsible for bringing the hospitality trade to the beauty spot and so trace some of their family history. 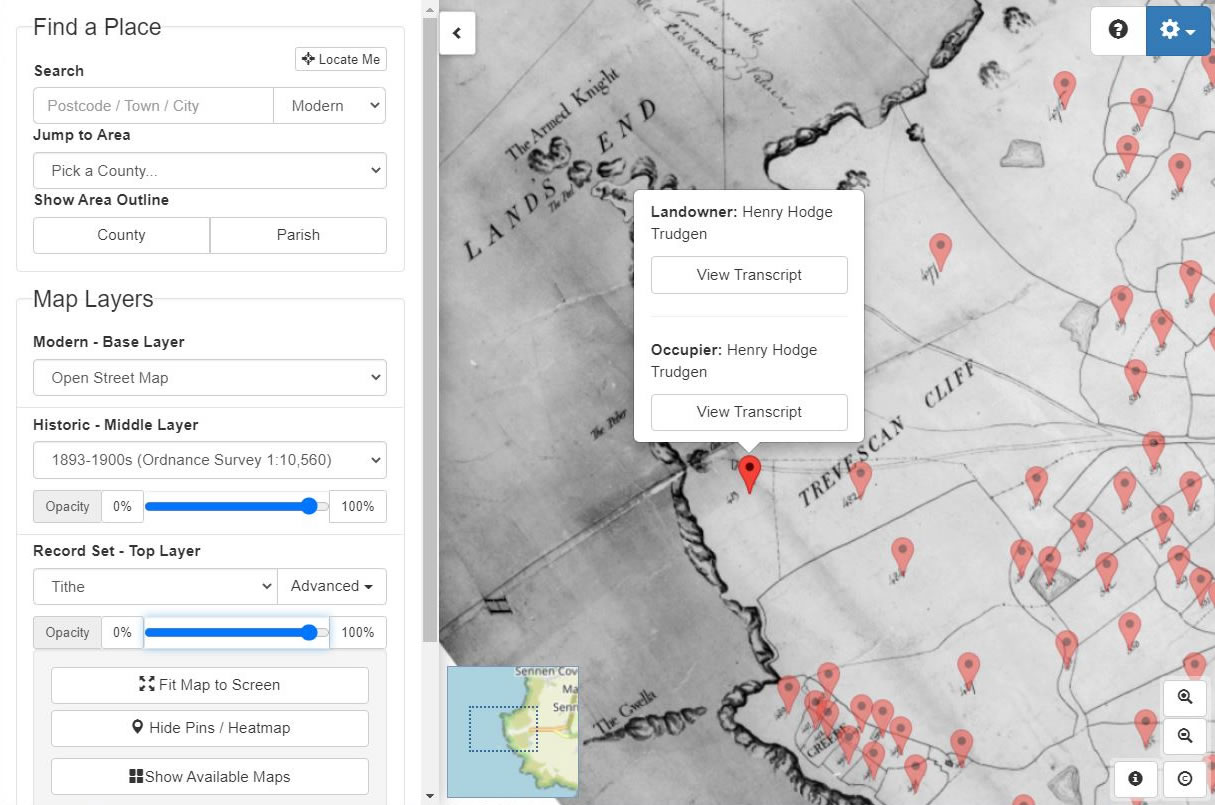 From the Map Explorer's dashboard on the left hand side we can scroll down and select Tithe as the Record Set – Top Layer and then we can zoom in until the pins for the plots at Land's End appear. From this we can see that the plot that would be incorporated into the site was owned and occupied by Henry Hodge Trudgen and is a cliff mostly covered in furze. A neighbouring plot of land which was owned by Israel Vingoe in 1839 at the time of the tithe survey and was described as a Turbary (a place where turf or peat is dug or cut), would at some stage after the death of Israel in 1854 be bought by his cousins to become united as the place where the Land's End Hotel, plus some other buildings would spring up.

What is not immediately apparent from this is that the Vingoe and Trudgen families were already related. Henry Hodge Trudgen's wife, Mary, had been a Vingoe until her marriage as she was the daughter of William and Mary Vingoe. According to what is written on the Vingoe family's website (http://vingoe.name/vingoe_families_link_to_the_land1.htm), they were from two branches of the family with Israel coming from the branch of the family that were established at Trevescan, while William Vingoe and his daughter Mary were from the Trevilley branch. These two hamlets, however, are very close to each other in the same parish and linked by a footpath across the fields, as a look on the historic map on Map Explorer reveals. 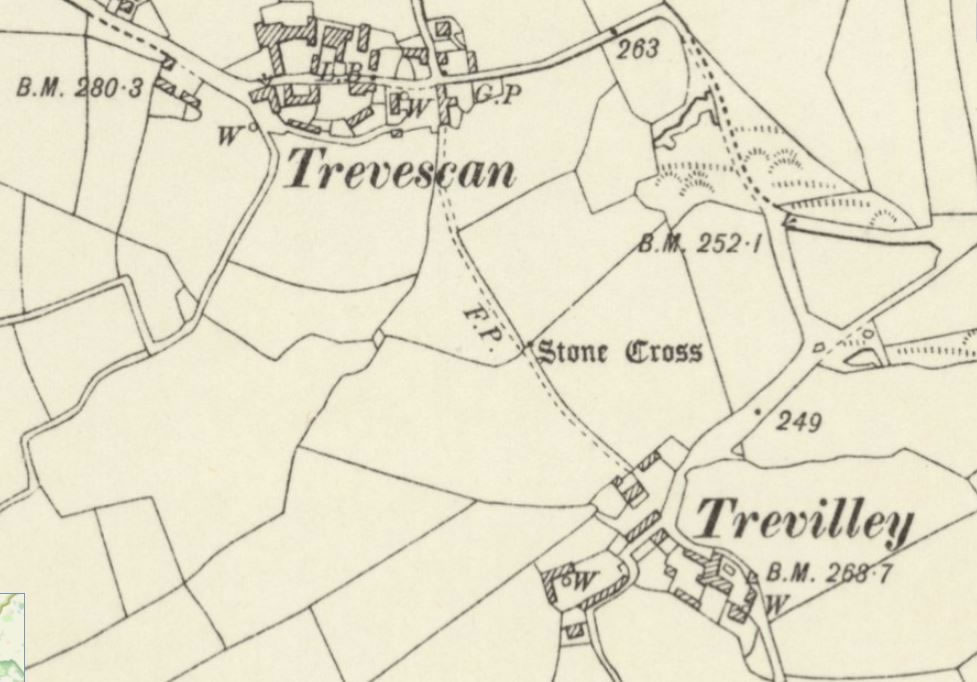 A search of the tithe records for other property owned by Henry Hodge Trudgen at the time the survey was conducted returns a number of other holdings in the area. These include the ownership of The First and Last Inn, not at Land's End itself, but in the neighbouring village of "Treeve Church Town Tenement". By using the Map Explorer to view the modern map we are able to see that this establishment is still in operation, though the village is recorded today as Sennen. 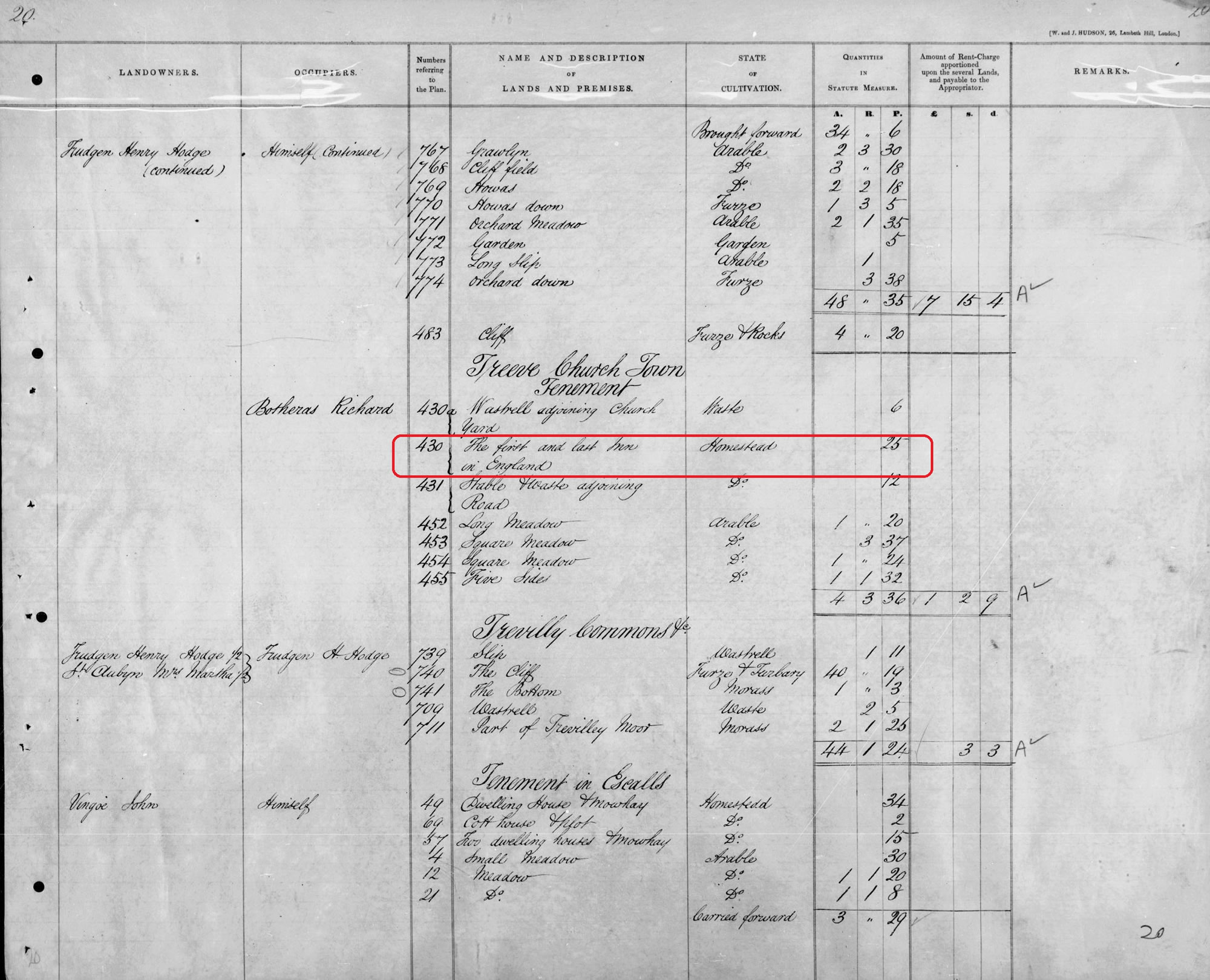 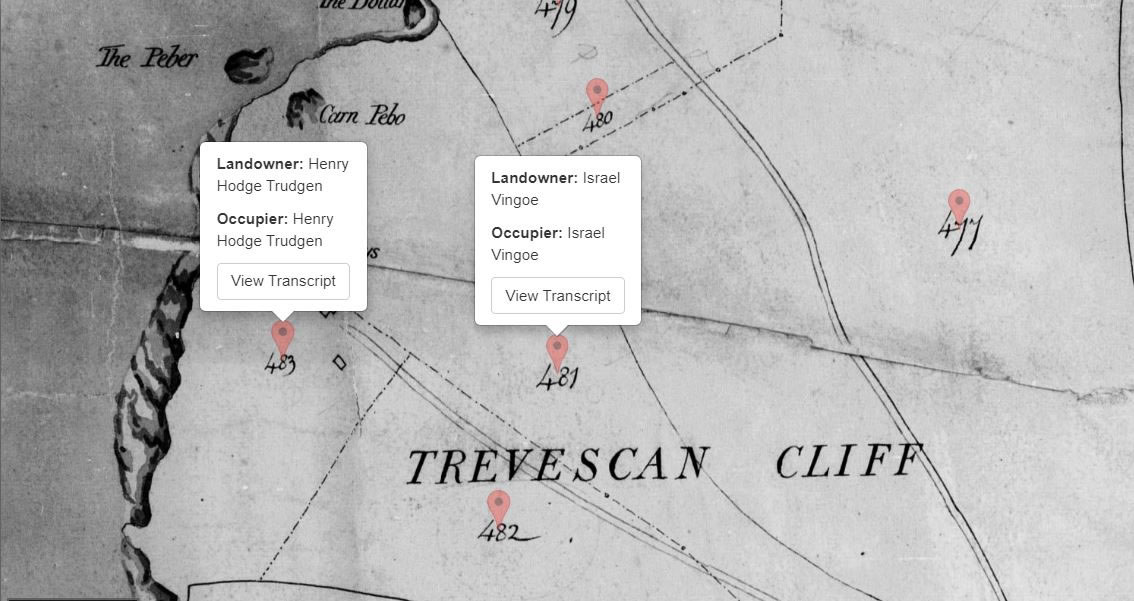 Israel Vingoe's Turbary, Plot 481, The Cliff would form an important part of the new development in 1859

When Henry Hodge Trudgen married Mary Vingoe in 1826 the groom was already part of the family as he was related to his bride's mother through her parents, the Hutchens. With the marriage to Henry, Mary Vingoe's land inherited from William Vingoe would have become the legal property of her husband and so although the surname of the owner of the Land's End cliff may have changed to Henry Hodge Trudgen, it was not exactly leaving the family. 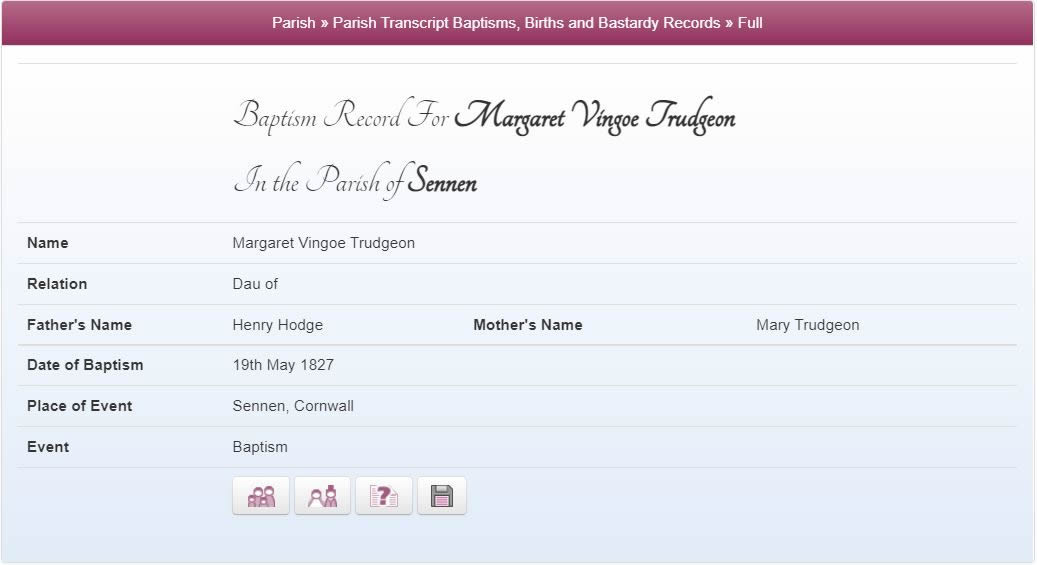 Henry and Mary would produce three daughters together, the eldest of which was named Margaret and whom we can find recorded at the time of her baptism in 1827 in the Parish Records on TheGenealogist. She would go on to inherit her father's land on his death and as we can see by looking at the 1851 census she is recorded at the time as a Landed Proprietor aged 23. Mary is the head of the household with her widowed mother and a general servant under her roof.

Check who the neighbours are

When researching our ancestors in the census it can often be revealing to check who are the neighbours in a street. Sometimes we may find other members of the family living in the same road and so a useful tool is the ability to do a street search of a census on TheGenealogist by clicking on the address link in the results and so view all households on the street. In the case of Margaret Trudgen we may have already noted that her servant has the surname of Hutchens, the same as her maternal grandparents. Even more interesting is that a widowed neighbour and her daughter lived next door were also called Hutchens – it would seem likely that these were family. Also of importance is the neighbouring family on the other side of Margaret's home. Here lived the Landlord of the First & Last Inn, Thomas Toman and his household. This building was the Inn that we have already discovered from the Tithe records had been owned by Margaret's father, Henry Hodge Trudgen and so we can assume was now a part of her portfolio of land and properties. 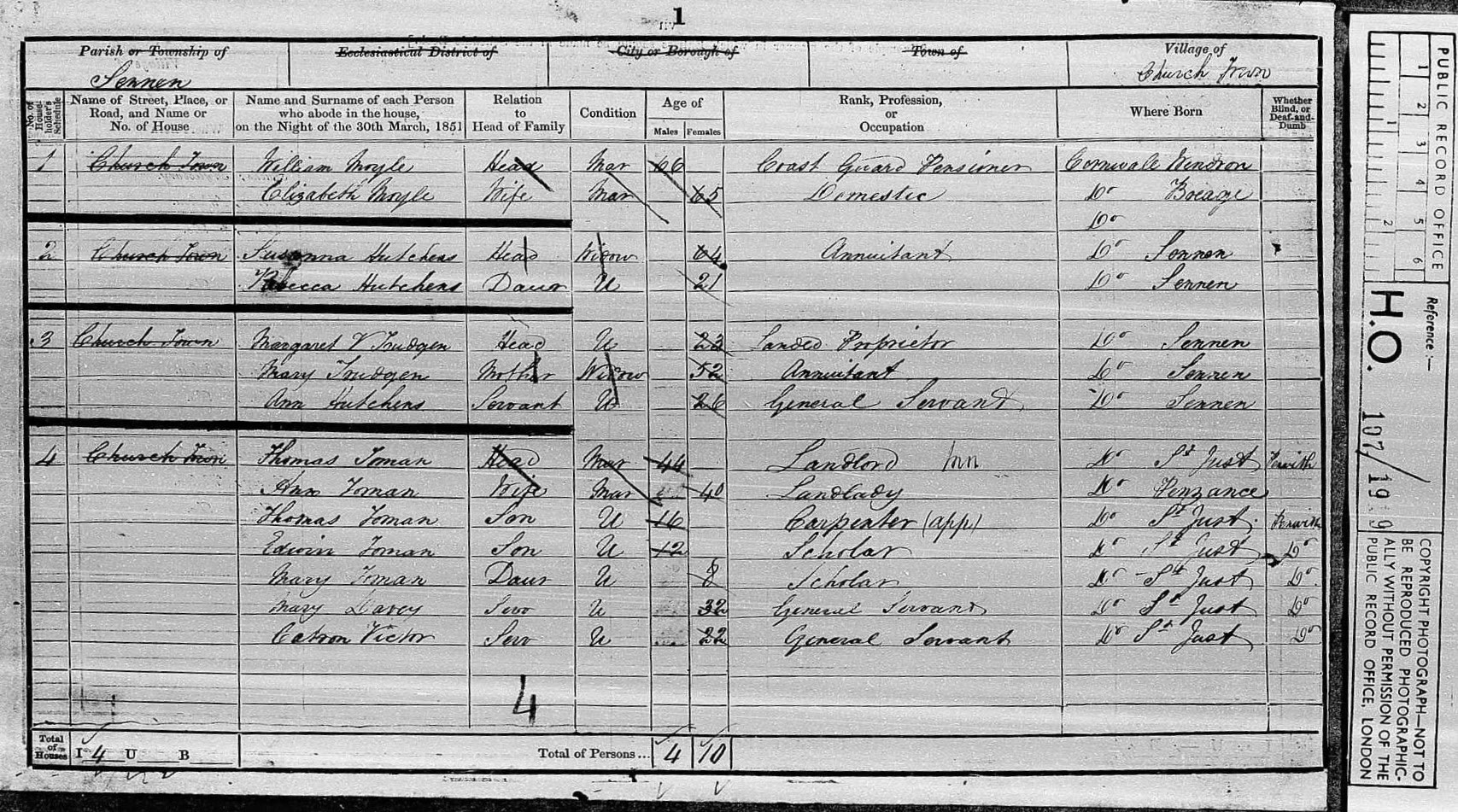 1851 census on TheGenealogist records the neighbours

If we now look at the Inn Keeper's family, as recorded in this census, we will notice that it includes a 16 year old son, Thomas, who was an apprentice carpenter at the time. This investigation being a story filled with interconnected family relationships the reader will not be surprised that, despite being seven year his senior, Margaret the Landed Proprietor would go on to marry the Inn Keeper's son. The wedding between Margaret Vingoe Trudgen and Thomas Hutchens Toman took place just five years later in 1856, as we can see from the records on TheGenealogist. With this record we also discover that the Tomans are also "cousins" as they are related to the Hutchens as we can see from Thomas's middle name being Hutchens. 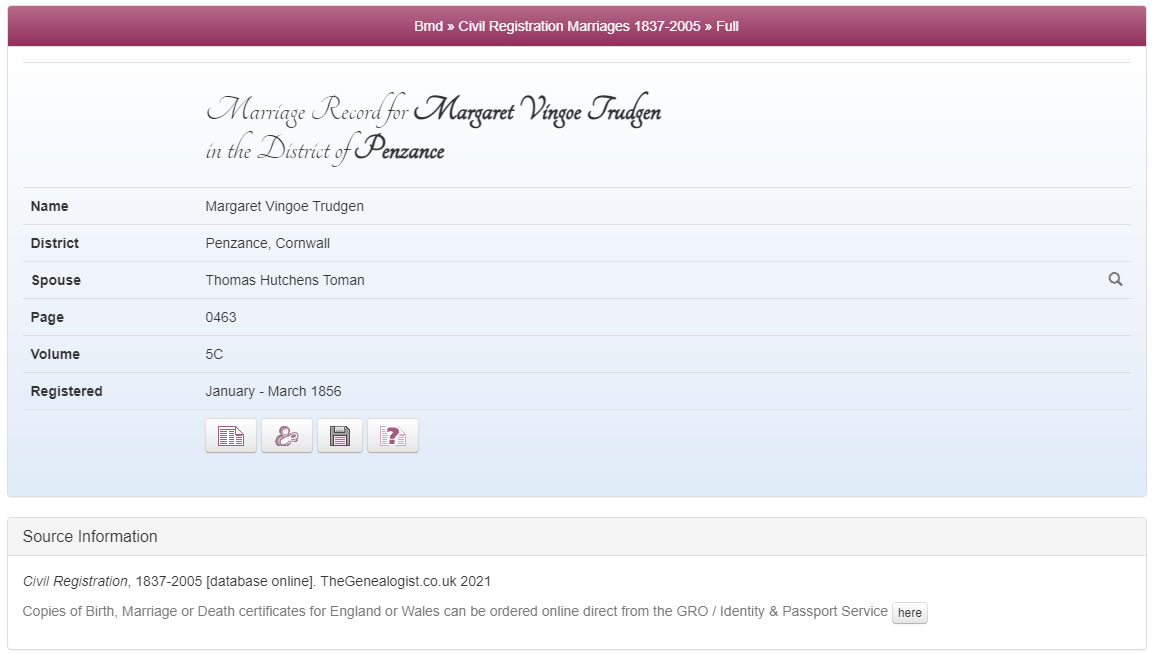 Marriage of Margaret, the landowner, to Thomas Toman in 1856

The expansion of the railway system saw the tracks reach Penzance in 1859 and with this development for travel came more and more tourists to the area. What had once been an isolated cliff and turbary now became a destination to visit. Tourists need food, drink and accommodation. We can assume that the enterprising Margaret and Thomas Toman must have seen the potential for expanding their trade from their original business, The First & Last Inn at Sennen, to also cater for the visitors going up to the point. With the death of their "cousin" Israel Vingoe, in 1854, and after the land had come into the Toman's ownership, the first buildings were then erected. We can see from the 1861 census that Thomas, Margaret and the household have set up the hotel at "Lands End Cliff, Sennen Church Town" where Thomas is the Innkeeper.

The Hotel at Land's End Cliff in the 1861 census

In the 1881 census Thomas Toman, "Hotel Keeper" and one of his and Margaret's daughters, Annie, are in residence at what is called "Landsend House, Trevescan Cliff" while Margaret and the other daughters are in the house next door to their other business The First & Last Inn back in Church Town, Sennen. Keeping it in the family, that inn was being run at the time by Thomas's brother Edwin Toman.

Thomas and daughter Annie up at Landsend House 1881

By the next census in 1891 the Land's End property was recorded as "The Lands End Hotel" and on census night the occupants were Thomas Toman and his daughter Dorothy. His wife Margaret and Margaretta, another of their daughters, are to be found in the house next door to the First & Last Inn in Sennen. While it was not quite the development that we see at Land's End today the "cousins" at Sennen had taken Israel's turbary with its rustic furze store and had replaced it with a house. At first they had built a simple building which then became a hotel to complement their inn at Sennen Church Town. A temperance hotel that was built next to the Land' End Hotel and run by another family who were also "cousins" came next to provide a service to that section of the visiting public who sought unlicensed premises in which to stay and lastly a small shop that sold refreshments and postcards which became known as the First & Last House in England, a picture of which can be found in TheGenealogist's Image Archive.

What we can learn from this study is that when researching your family history, always remember to take a look at the neighbours whether it is in the census or in land records such as the tithe survey from Victorian times. You may be lucky enough to find, like in this family story, that it is the "cousins" who live next door or just down the road! 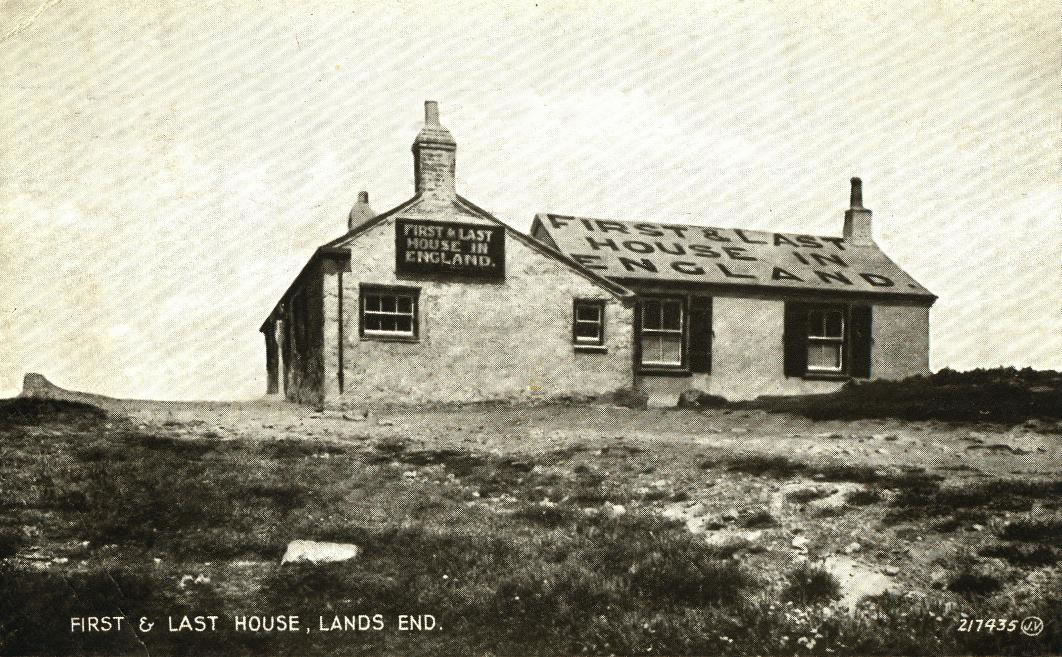