There are a myriad of records that we can use to discover more about our ancestors and to build a fascinating story of their lives. A resource that gives the researcher dates and places for where an ancestor had been at various times in their lives is one that will be valued by family historians. It is for that reason that many of us will enjoy using TheGenealogist's latest release of a slew of military books. These searchable records contain lists of men and women who served their country in various capacities connected to the military.

Included in the latest release is The War Office List 1920, where we can find a Miss Florence Agnes Hebb who had been Deputy Chief Superintendent of Typists at the War Office. We can follow her appointments from December 1890, when she first joined the War Office as a typist, to receiving an M.B.E in January 1918 and then becoming Controller of Typists at the Air Ministry in March of that year. Another entry in this same publication was for one Mr Francis Josiah Hudleston O.B.E. whose role as Librarian meant he had an encyclopedic knowledge of the tomes held by the War Office, having transferred there from The Department of Printed Books and before that The British Museum.

These book records have been made fully searchable by TheGenealogist and join a broad range of other general and military records in their collection to help researchers discover more about their ancestors. For those looking to find an officer in the British Army there are a number of resources. For example there is the Graduation List of Officers of the British Army for October 1915, as well as the edition for July 1924. Another excellent list to use is that of the Western Command Official Directory No. 12, April 1938 as well as the Northern Command Official Directory No. 45 November 1938 which contains the organisation and distribution of all Troops in the Command, the Composition of Command Head-quarters, Divisional and Brigade Staffs and the names and addresses of all Officers in the Command, Regular Army, Territorial Army, Officers' Training Corps, Royal Navy and the Royal Air Force at this time just before the Second World War.

This newly released collection also includes other searchable books that could just contain that piece of information that will help you move your research on a little bit further. For example, is your ancestor to be found in A List of the Royal Military College at Sandhurst, 1833? Are they recorded amongst the pages of the Rules And List Of Members of the Imperial Service Club? May they be in The War Office List 1939, or in that 1920 edition of The War Office List alongside Miss Hebb, our Controller of Typists, or Francis Hudleston, the War Office Librarian that we found earlier?

Meanwhile, for those with Canadian ancestors there is the Canada, Defence Forces List, August 1938, as well as the edition for November 1939. And for those with forebears that served out in India there are various interesting volumes to view including The Records of the Clan Campbell in the Military Service of the Honourable East India Company 1600-1858. This resource can be consulted to discover the stories of each officer's military career (with postings), his parentage, issue and dates of birth and death in most cases. There are several other records in this release dealing with the British in India including The Bombay Artillery, List of Officers 1749-1902, The East-India Register and Directory 28th August 1821, The India List, Civil and Military, July 1881.

Tracing a officer whose career soared to the heights

It was in another of the publications in this new release that we found a man who would rise up the ranks of the Royal Air Force to one day become an Air Chief Marshal. At the time of the publication of the Monthly Official Military Directory for Salisbury Plain (April 1914) he was an Army officer attending the Central Flying School at Upavon. Hugh Dowding was listed as one of the army officers under instruction at the facility that trained Naval and Army pilots in this part of Wiltshire. This was before the formation of the Royal Air Force that would evolve from the Royal Flying Corps in 1918. 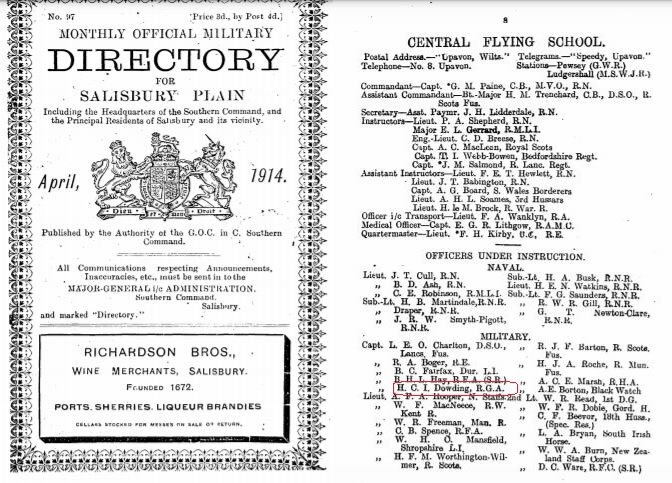 Captain Dowding is recorded at this time as being an officer in the R.G.A. or Royal Garrison Artillery. With this information we can then turn to the Army Lists on TheGenealogist and quickly locate him within these books. This gives us his full name (Hugh Caswall Tremenheere Dowding), his date of commission as a Second Lieutenant on 18 August 1900, and then as a Lieutenant on 8 May 1902, together with his date of Birth. 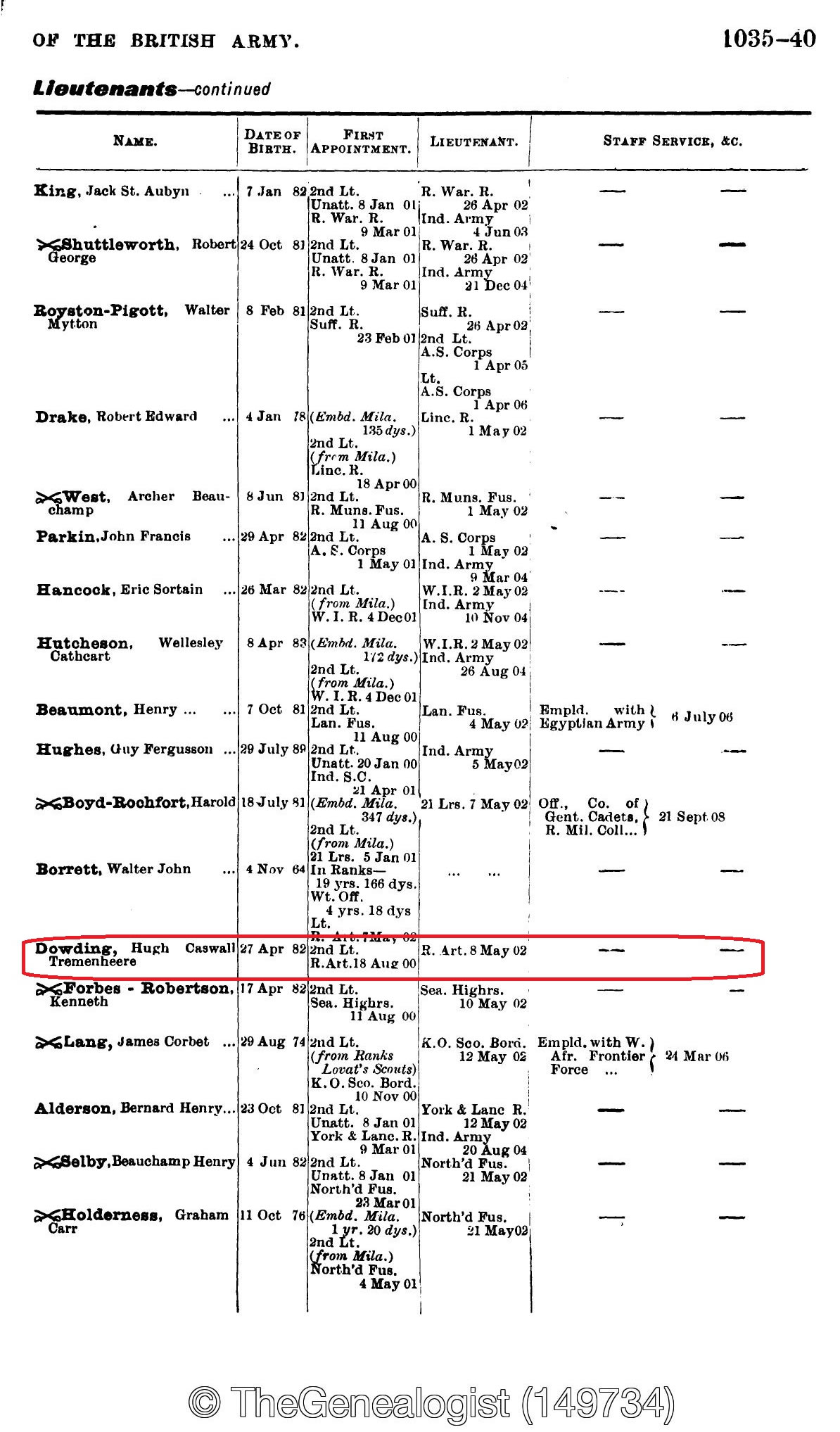 A search of the Occupational records on TheGenealogist finds us his Royal Aero Club flight certificate number in The Royal Aero Club Year Book 1914. This provides us with the type of aircraft that he used to pass the flying test, a Vickers Biplane, and the place of his assessment was at the famous Brooklands airfield on the 20th December 1913. 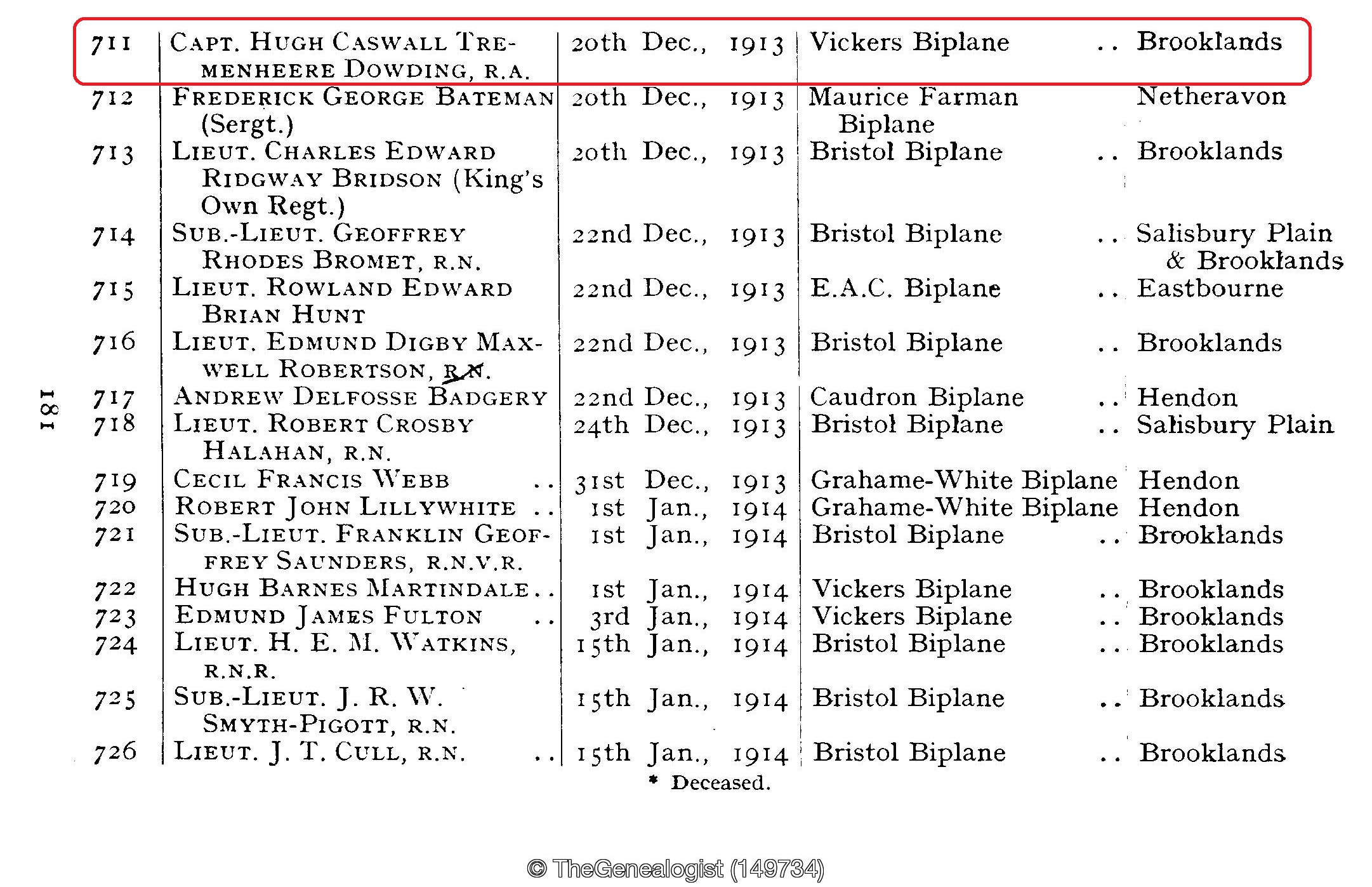 From here we can discover the illustrious officer in the Occupational Biography records found on TheGenealogist where Air Marshal Sir Hugh Caswall Tremenheere Dowding's entry in the Who's Who in Aviation explains that he served in India before WW1, was seconded to the R.F.C. in 1914, served in France in the war and gained a permanent commision as a Group Captain in the R.A.F. in 1919. His education, the snippet tells us, was at Winchester College and so from this we are able to turn to the Educational records on TheGenealogist and do a search for him in the College Register. This provides us with his entry for 1895 in the famous public school's register. 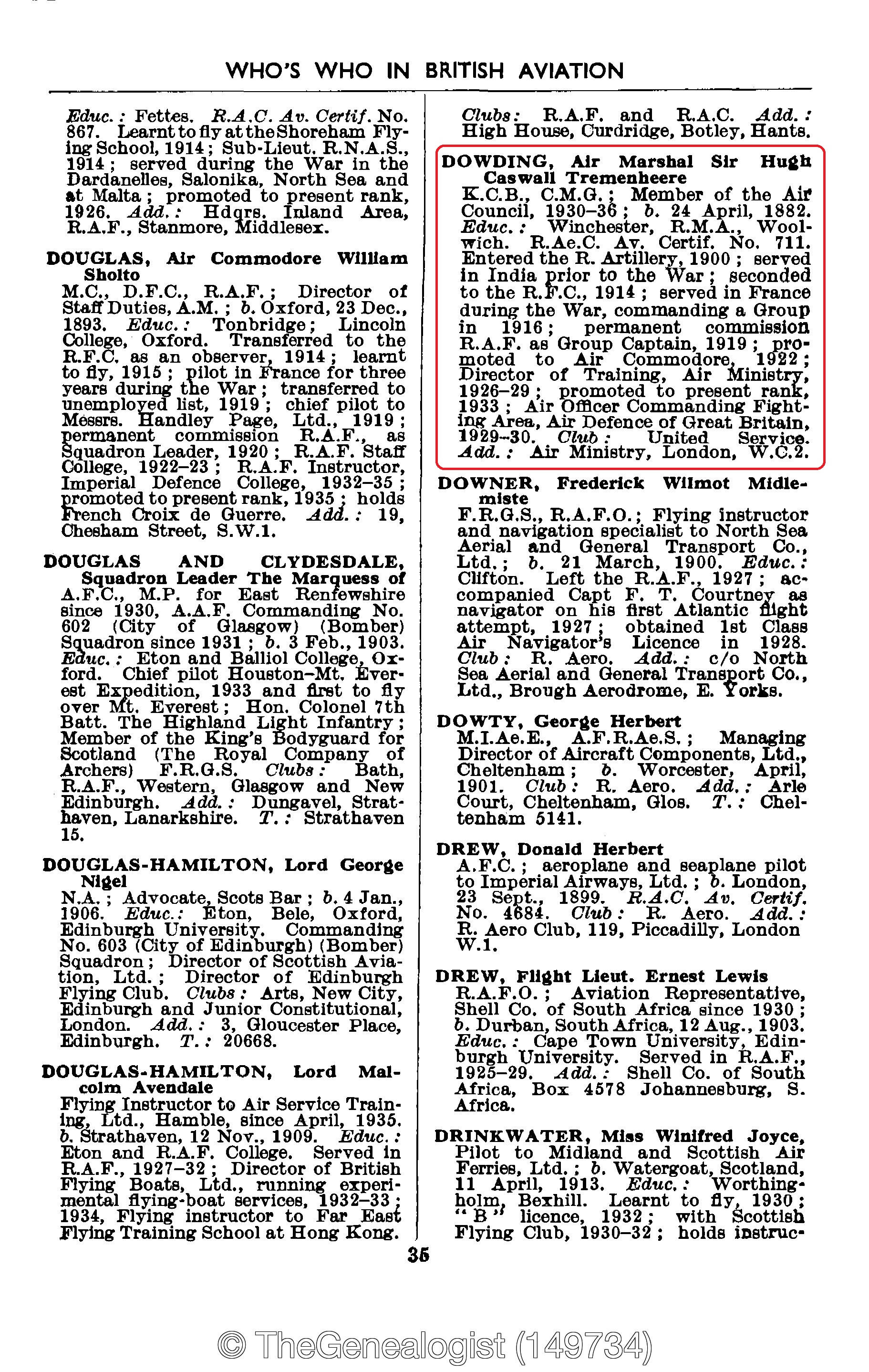 Who's Who in Aviation from TheGenealogist's Occupational records

The paragraph for Hugh Dowding points out that his father, Arthur John Caswall Dowding had also attended the school and so by now turning to that entry we are able to find the next generation back. It also becomes apparent that Hugh was born at the time that his father was the Headmaster of St Ninian's Preparatory School in Moffat, Scotland which explains his Scotts birth. Hugh Dowding's grandfathers are identified in this record as the Rev Benjamin Charles Dowding of Southbroom, Devizes and on his mother Maud's side, Lieut-General C.W. Tremenheere; all of which could be useful in order to trace back even further.

By returning to the Who's Who in British Aviation 1936 we see that Air Marshal Dowding was by this time Air Officer Commanding Fighter Command. If we then look at one of the many Second World War R.A.F. Operations Record Books (ORBs) that are being digitised by TheGenealogist and added to their military records, we are able to look at several entries for the high ranking Air Force officer. For the purposes of this article we have chosen one from the 25 June 1940 when at the base in Middle Wallop, Hampshire the by then Air Chief Marshal visited No 401 Squadron Royal Canadian Air Force. Discovering that the Squadron's planes were not the latest model he went away and immediately made arrangements to have them replaced. 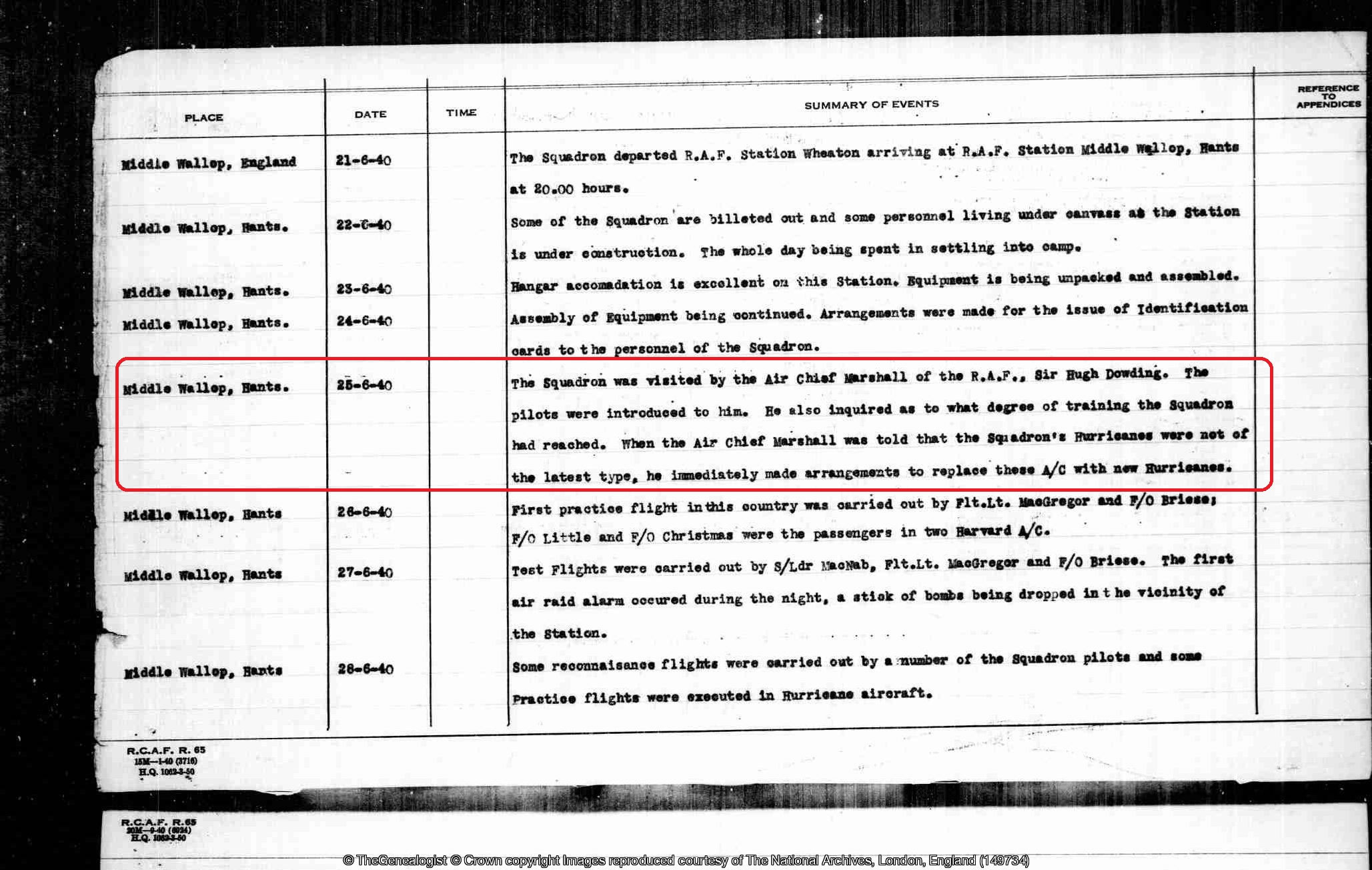 The ORB for that day records that: 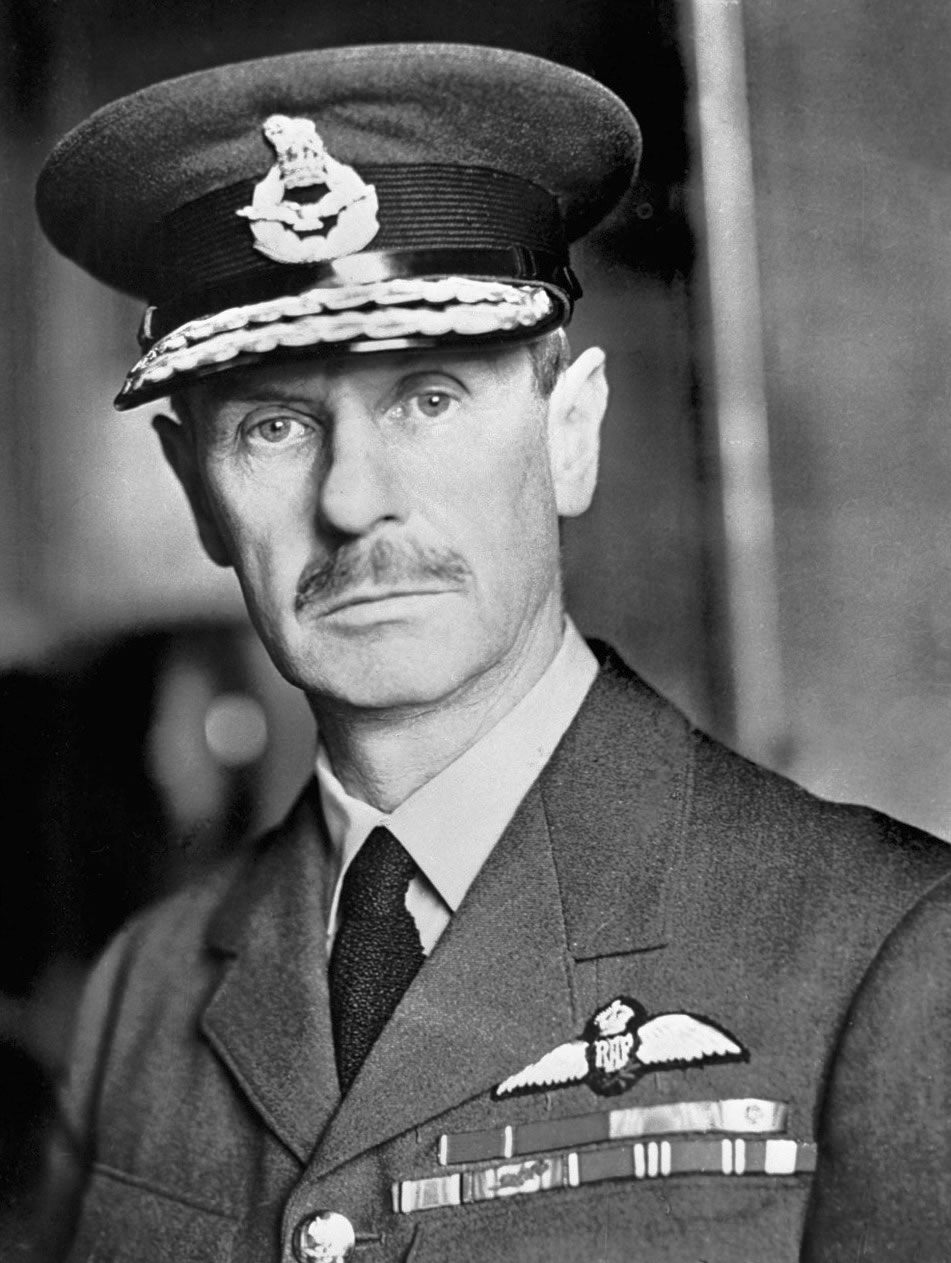 When researching an ancestor's story family history researchers need to find several resources that will throw light on dates and places for where an ancestor had been at different times during their lives. It is for that reason that TheGenealogist's latest release of a number of military books will be a welcome addition as these fully searchable records contain lists of men and women who served their country in all sorts of capacities connected to the military. With the information contained within these records we are often pointed towards other areas in which to continue our research and so to build a fascinating family history tale.