Sometimes a look down the column marked Quality, Trade or Profession on a page from the baptisms in a church register is a fascinating exercise to do. The variety of occupations that is revealed for the fathers of children baptised in a certain time period in a particular parish can be telling especially if it is a parish in which the high and mighty live alongside more ordinary people. The church is there to take care of baptising, marrying or burying its flock whether they be Royalty or the more humble citizens in its parish. Parish Registers make no distinction of rank and will list the individual to whom they are performing the religious ceremony in chronological order without favour as to who their family are. 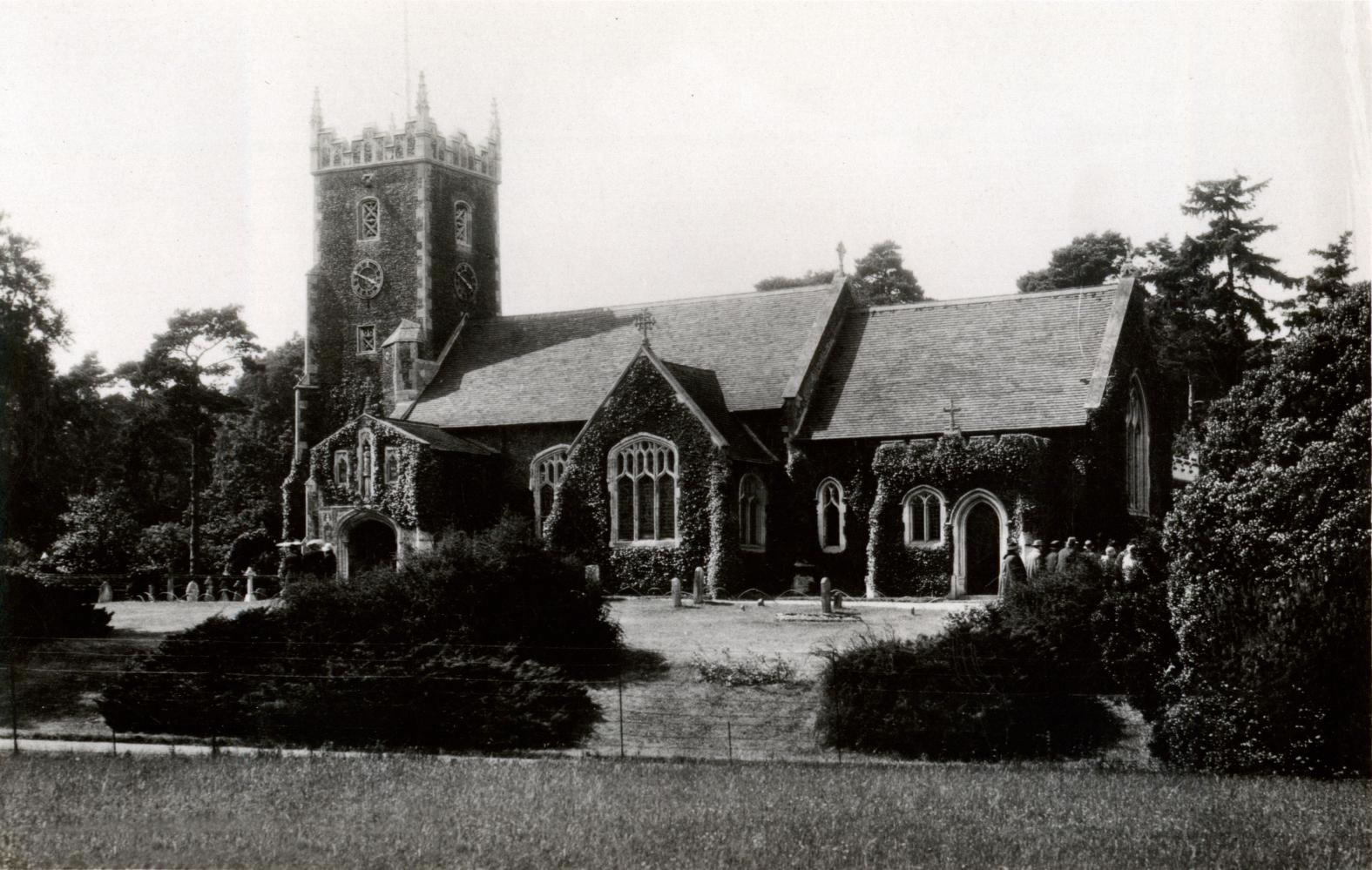 An example can be found from a look at a page from one particular parish record from the English county of Norfolk. The relevant parish register had originally been compiled in the Victorian period and is one of those that is available to subscribers of TheGenealogist, who have made the records available online in association with the Norfolk Record Office. These Norfolk Parish Records are fully searchable, have been transcribed as well as providing the researcher with a link to images of the pages of the actual registers.

The year for our example is 1897 and the first child's father is a Bank Clerk, the second a Gamekeeper, there is a Police Constable and also a Coachman. Between the Gamekeeper and the Policeman is a Captain in the Royal Navy – though not just any Royal Naval officer, as a glance to the left side of the entry shows us the parent's name. This box reveals to us that these are Their Royal Highnesses the Duke and Duchess of York whose eldest daughter, Victoria Alexandra Alice Mary was being baptised on the 7th June 1897. This particular Duke of York was the third son of King Edward VII and the duke would himself become King in 1910 taking the regnal name of George V. He was not expected to ascend to the throne when he was born, but did so as his elder brother predeceased both their father and his grandmother, Queen Victoria. In consequence of this change in circumstances the Duchess of York, referred to in the pages of this Sandringham Parish Record baptism, would become better known as Queen Mary. The child being baptised, Princess Victoria Alexandra Alice Mary, was the only sister of two men destined to be future kings – Edward VIII (known as the Duke of Windsor after his abdication) and King George VI, father of the present Queen. This makes the infant girl, whose baptism it was, the paternal Aunt of Queen Elizabeth II. 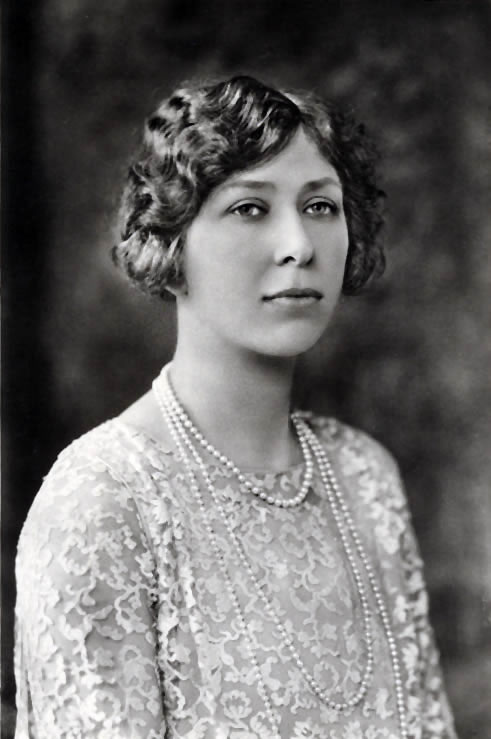 While the baby princess was named Victoria Alexandra Alice Mary at her baptism, she became known as Princess Mary of York. Later in life she would marry the Earl of Harewood and in 1932 she was given the title of Princess Royal. From then on she was known as Mary, Princess Royal, Countess of Harewood. 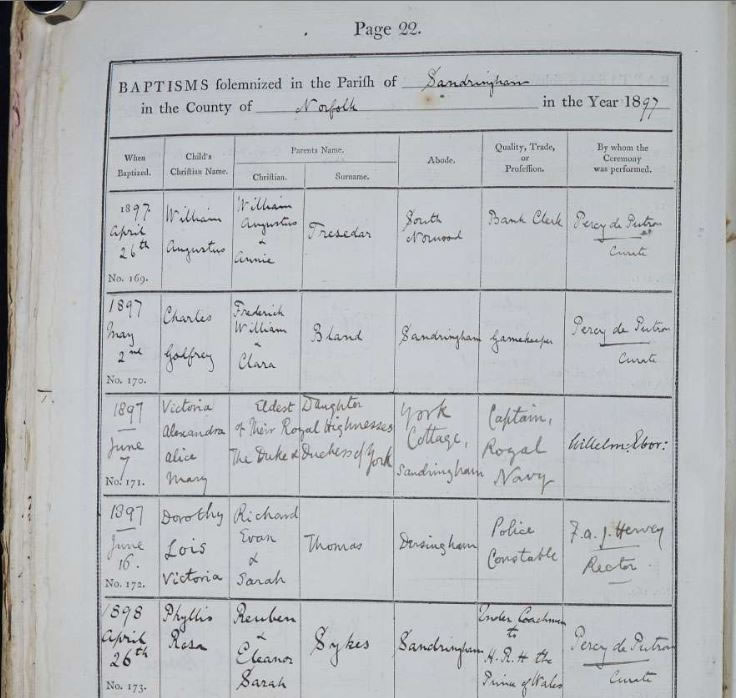 Another Royal Naval Officer and Duke of York in the records

Fast forward to more recent times and we find in these parish records the baptism of Eugenie Victoria Helena. This is the younger daughter of the current Duke of York, a Royal who is constantly in the news at the moment as arguments persist as to whether the U.S. court papers have been properly served on him. Princess Eugenie, born and baptised in 1990, is recorded as the daughter of an Officer, Royal Navy and is sandwiched in an egalitarian manner between the son of a Production Operative and the daughter of a Carpenter.

These examples of English Parish Records neatly show that all levels of British Society no matter what their status may be, are assigned their place on the page of a parish record strictly in chronological order. It matters not whether they are the child of a gamekeeper, a policeman, a production operative, a carpenter or a prince. In the eyes of the church their date of Baptism is the pre-eminent factor. 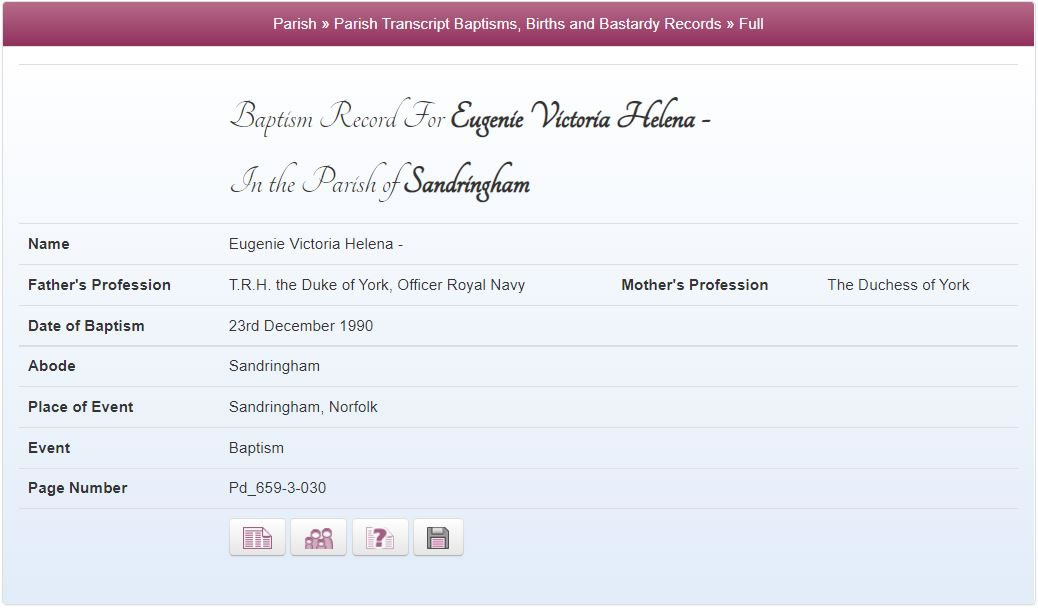 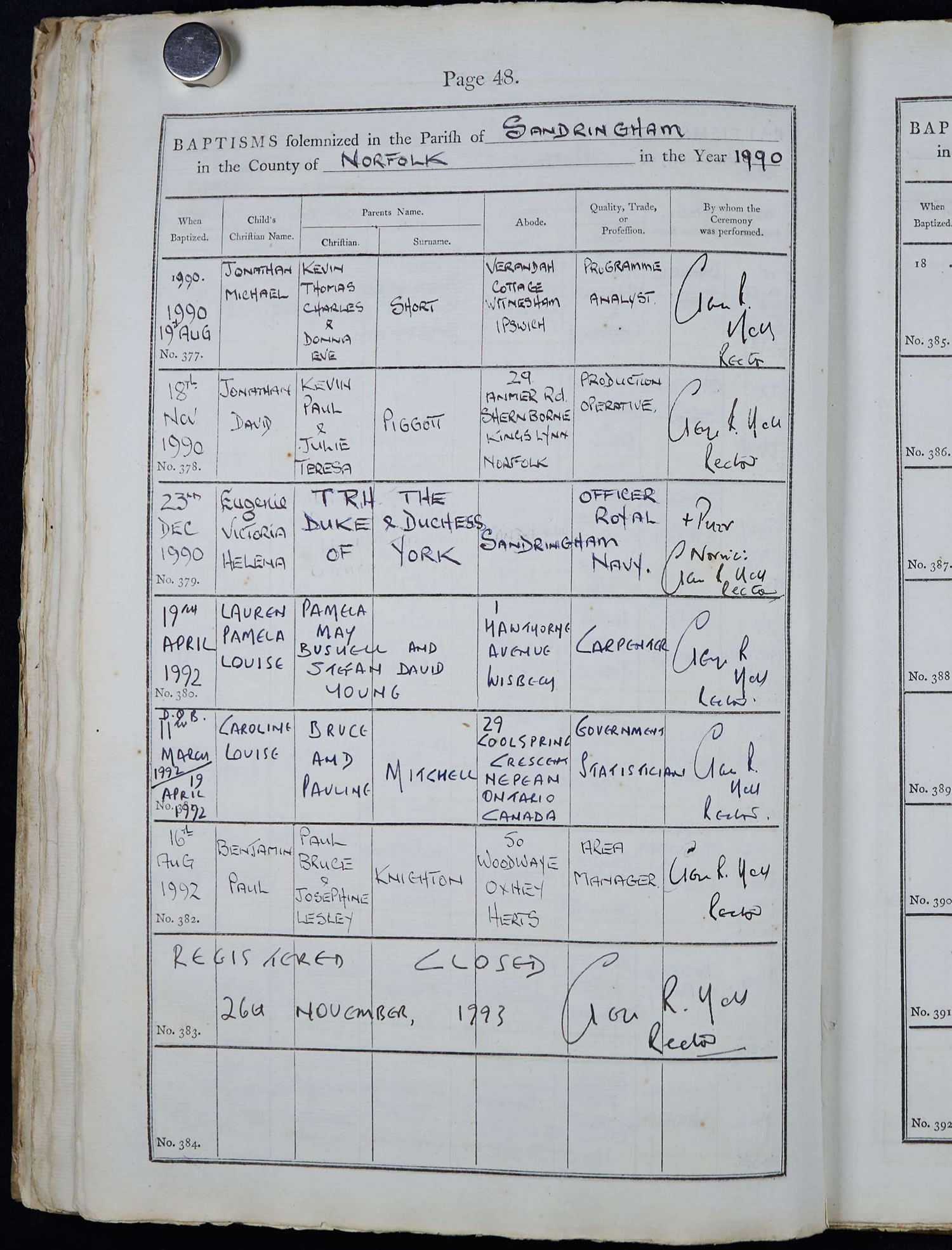 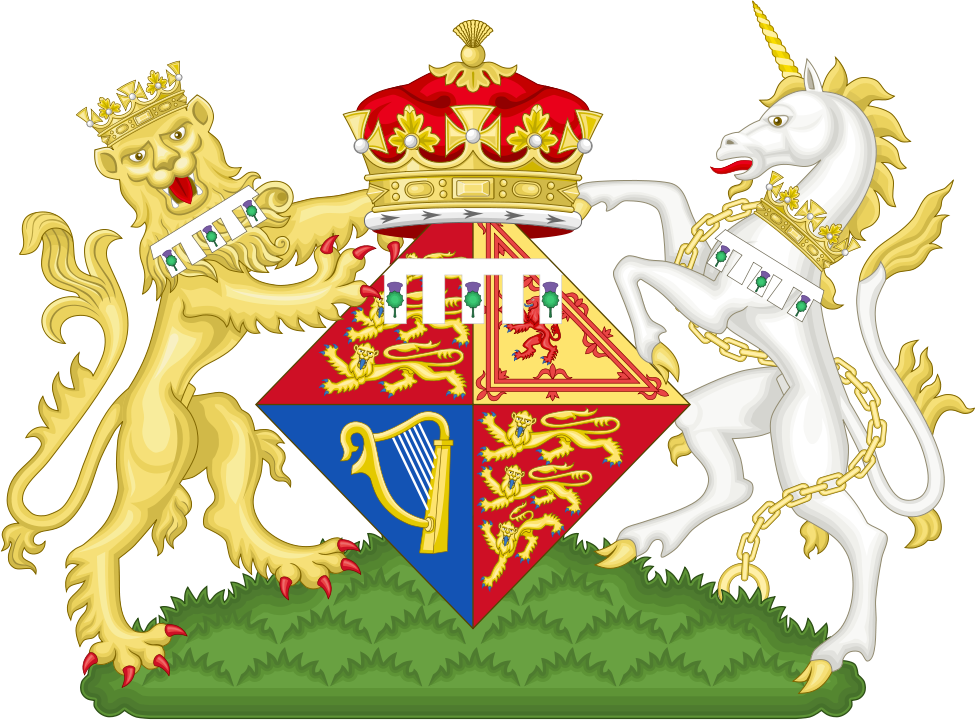 Heartbreaking notes in the records

Sometimes it is the notes written in the margins that reveal extra information about the individual. This can at times include tragic details that must be every parent's nightmare – that the child is being baptised privately in an emergency because it is in danger of death. Royalty, just like ordinary folk, are not protected from the devastating visit of the grim reaper just after a child has come into this world. This is the case in the example of the baptism of Alexander John Charles Albert Wales on the 6th April 1871. The son of the then Prince and Princess of Wales we see, from another note on the page, that the infant died the very next day on the 7th of April 1871. 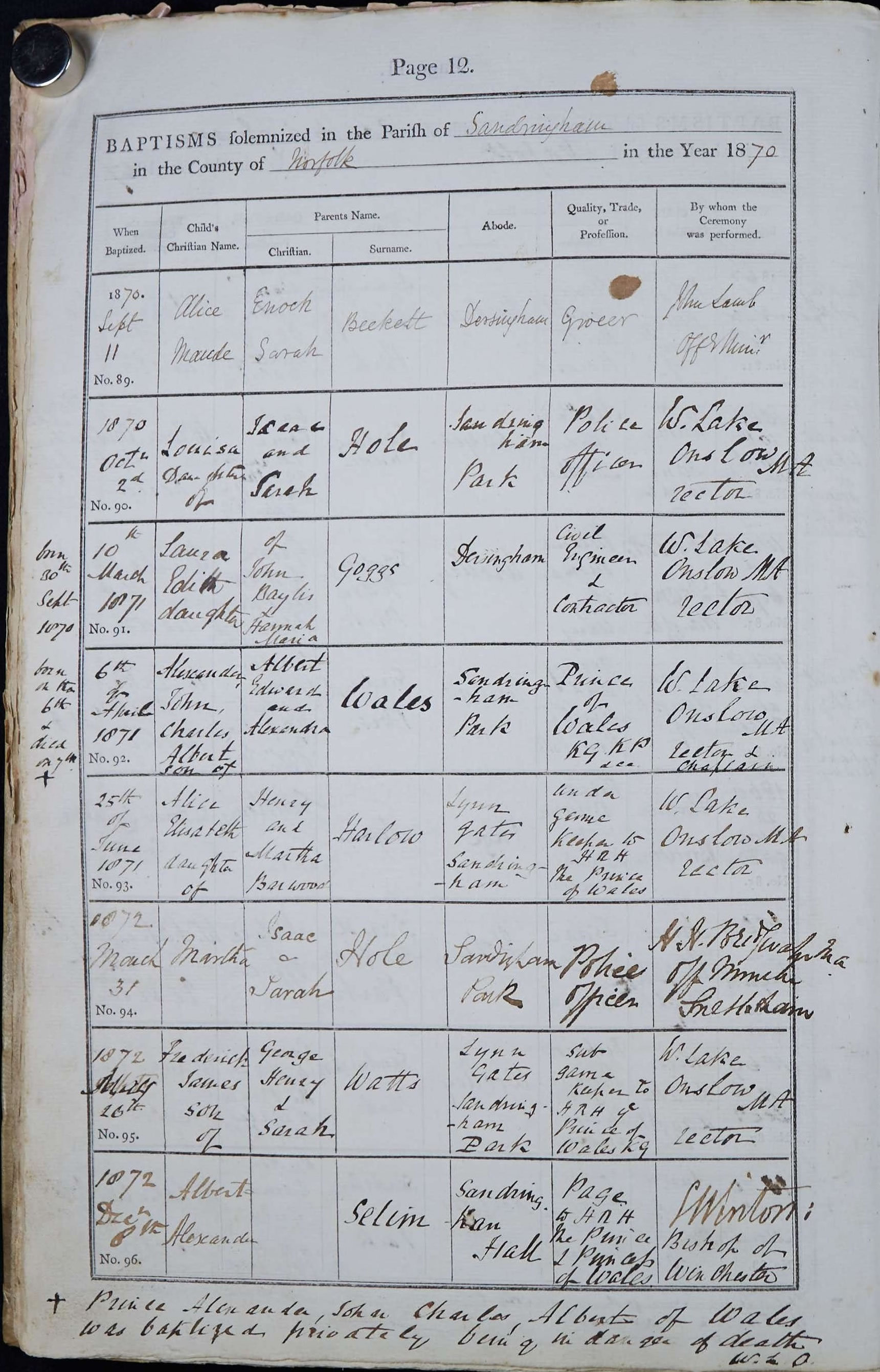 In family history it is not uncommon at all to find that an ancestor does not always go through life retaining the name or names that they are given at baptism. We have already met Princess Mary whose baptismial names were Victoria Alexandra Alice Mary. Now we can also find the baptism of Alexander Edward Christian Frederick on the 11th August 1903. Alexander was a Danish prince whose mother was a British princess (Princess Maud of Wales, daughter of King Edward VII and Queen Alexandra). One day Prince Alexander would succeed his father, Prince Charles of Denmark, who was also known as Prince Carl, to become Olav V the King of Norway. Born in Britain to a Danish father and destined to be a King of Norway perhaps requires some explanation. 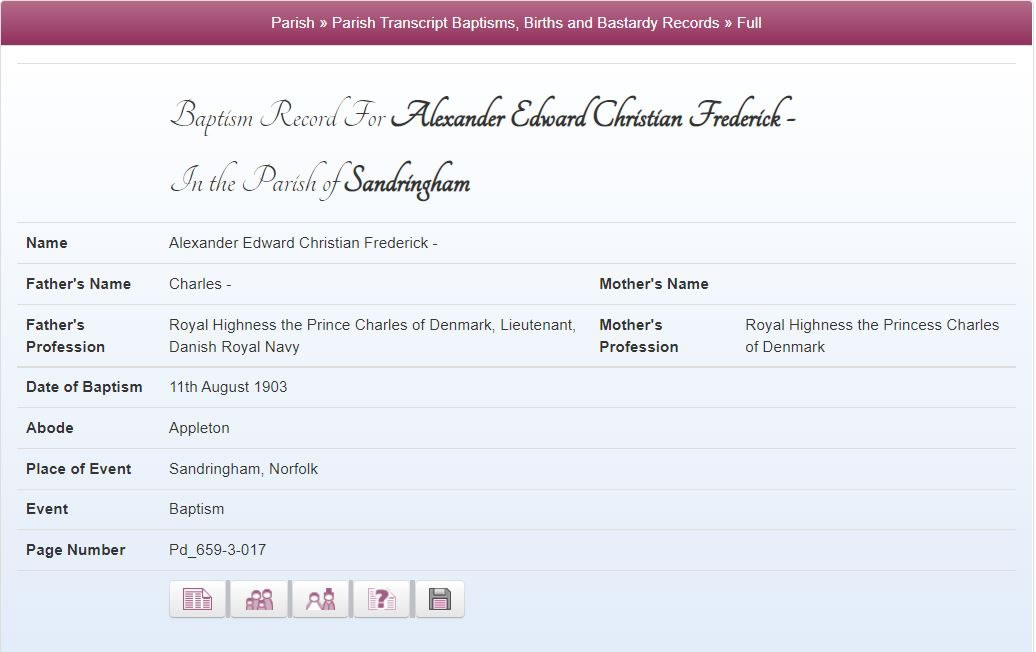 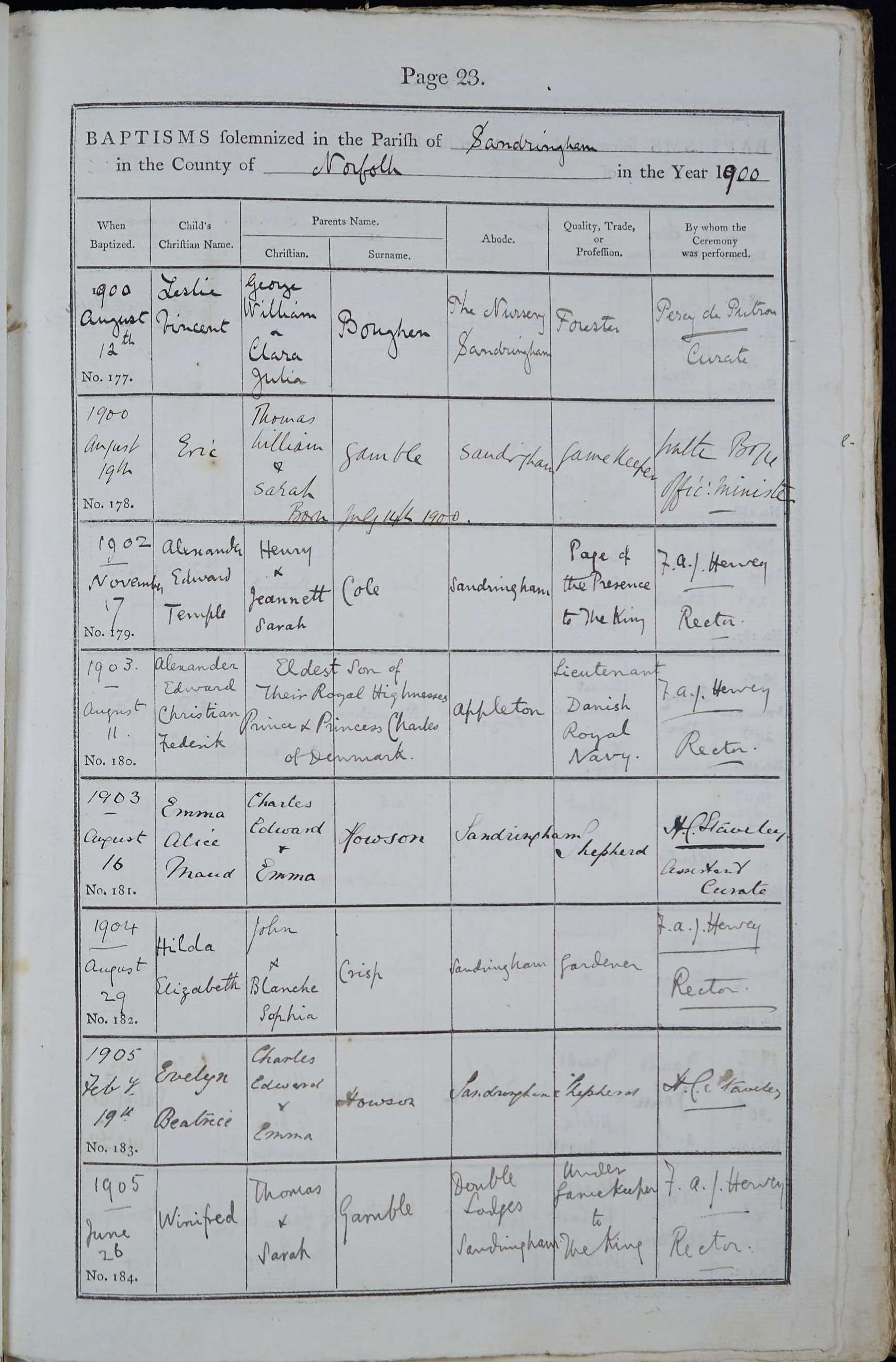 Baptism of Alexander Edward Christian Frederick of Denmark on the 11th August 1903 Sandringham, Norfolk, The future King of Norway

The crowns of Sweden and Norway were at one time united, though the countries remained separate nations. They had become united under one king after the Napoleonic wars in 1814 but the two states kept separate constitutions, laws, legislatures, administrations, state churches, armed forces, and currencies. Foreign policy, however, was made by Sweden. The nations drifted apart in their outlooks. By June 1905 a referendum was held in Norway on dissolving the union with Sweden with the response of Norway's electors being a decisive 368,392 votes for the dissolution and only 184 against, an overwhelming majority of over 99.9 percent.

The Norwegians turned to the second son of the Danish Crown Prince to be their new king. Prince Carl (or Prince Charles of Denmark, as we have met him in the Norfolk parish records) brought with him close ties to the British through his wife Princess Maud. The democratically minded Prince Carl, however, did not just accept his new crown. Being aware that Norway was still debating whether to remain a kingdom, or to switch instead to a republican system of government, he made his acceptance of the offer conditional on the holding of another referendum to show whether monarchy was the choice of the Norwegian people. A second plebiscite was held that year in November. It overwhelmingly supported the establishment of the new monarchy with 78.94% of the electors in favour so electing Carl and his descendants as the new royal dynasty of Norway. Having been informed of his election Prince Carl obtained formal permission from his grandfather Christian IX of Denmark. This he received and so Prince Carl then accepted the Norwegian throne and chose to be known as Haakon VII, Haakon being a traditional name of Kings of Norway. Meanwhile his two-year-old Norfolk born and baptised son, Prince Alexander, was renamed Olav and became Norway's crown prince. Olav would go on to marry his first cousin Princess Märtha of Sweden. While this may seem a very wise political move to reconcile Sweden with Norway, the marriage was actually one based on love. 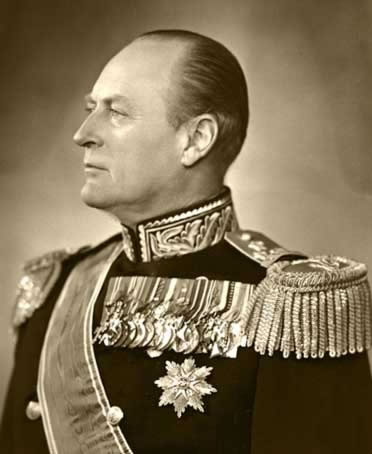 King Olav V was a very popular king of his country due to his considerate down to earth personality. In a Norwegian Broadcasting Corporation poll in 2005 he was voted as "Norwegian of the Century". Quite an accolade for a man whose birthplace was Norfolk.

Parish Records are one of the foremost record sets that any family historian can use when researching their ancestors. These often ancient books, filled with entries going back hundreds of years, were kept by the local Anglican Church. Before 1837, and the introduction of Civil Registration in England and Wales, these church records were the only official documentation of the population's vital events made by the authorities. As it was churchmen who were responsible for recording the information, in the registers of their parish churches and in some non-conformist places of worship, it is not surprising that the events reflected the minister's concern with the religious ceremonies. While in some cases both dates are noted, it was baptisms, burials and marriages, as opposed to actual dates of births and deaths that are mostly recorded in the registers. Their inclusive nature is that they record the christenings, weddings and burials of parishioners no matter how high or lowly born that they were. As we have seen here in this piece, princes and princesses are afforded just the same space on the page of the register as are the ordinary folk who also come to mark these significant life events and have them recorded by their parish church. For a family historian they can often be goldmines that allow researchers to trace their ancestors back generations.