If you were to ask most family historians which type of records rank the highest when tracing ancestors, Parish Records would be near, if not at the top of their list. These often ancient documents can take a family tree back hundreds of years. With the introduction of Civil Registration in England and Wales only beginning in 1837, before that these types of church records were the only official documentation of the population's vital events made by the authorities. As it was clergy who were responsible for recording the information in the registers of their parish churches and in some non-conformist places of worship, it is not surprising that the events reflected the minister's concern with the religious ceremonies of baptisms, burials and marriages rather than dates of births and deaths. That said, however, in some cases both dates can be noted.

The formal recording by the Anglican church began when in 1538 Thomas Cromwell, Chief Minister and the Vicar General to King Henry VIII, declared that all marriages, baptisms and burials should be recorded by the established church however these do not survive. If you are very lucky you may find parish registers dating to around the middle of the 1500s, when Elizabeth I's government declared that accurate registers should be maintained and had instructed that the parish records should be preserved in bound books of parchment and not on loose paper. Despite this many registers have been lost over the passing years to fire, theft and decay.

The fishy tale of the merchant and the witches

It is quite extraordinary that we actually have records to consult that are able to take us back to the 16th or 17th century. For example in some of the recent Suffolk Parish Registers released by TheGenealogist we are able to find the baptism record as well as the burial record for a man whose parental concern for his daughters led him to to accuse two of his townsfolk of bewitching his girls! 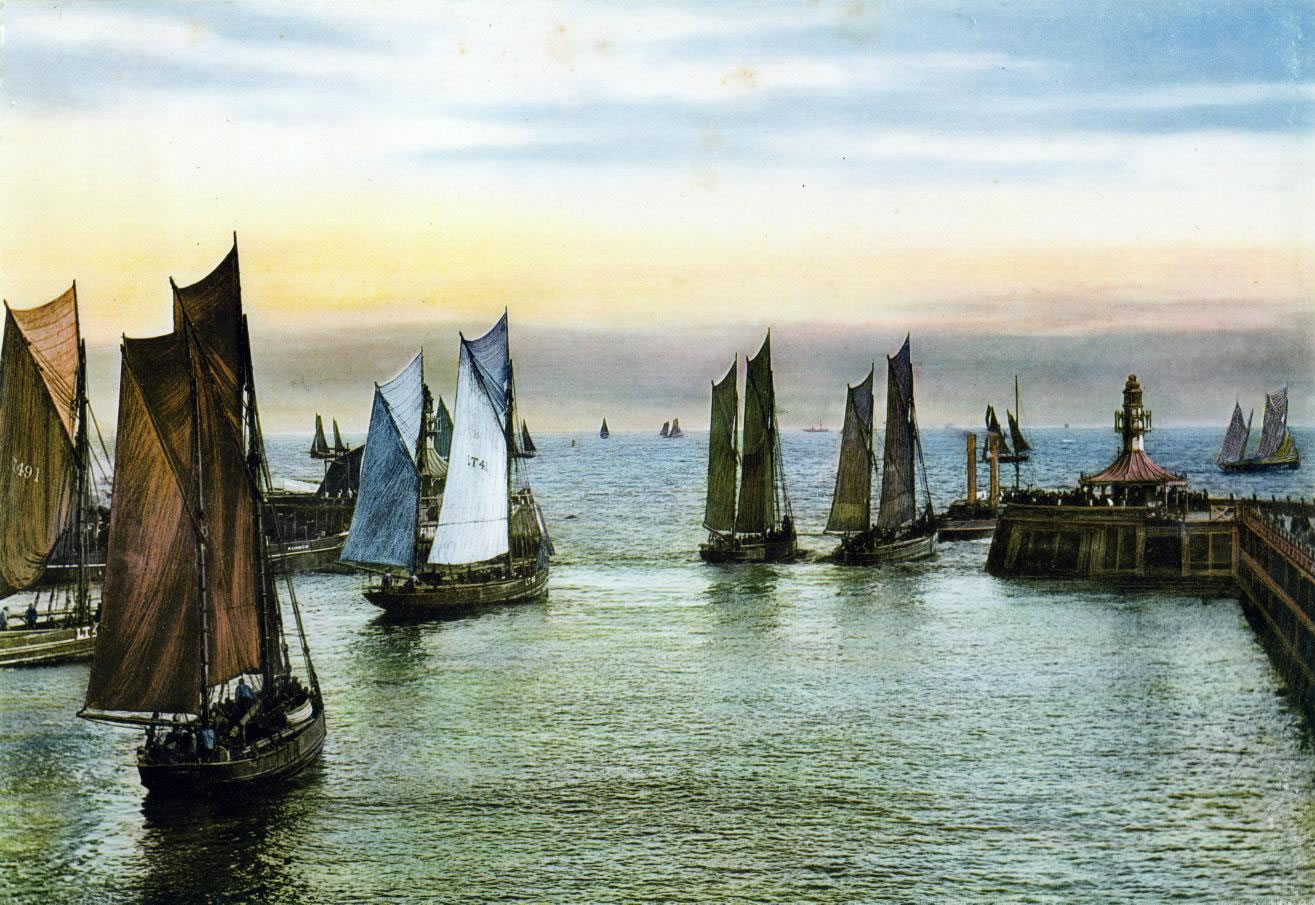 Lowestoft Harbour from the Image Archive on TheGenealogist

Samuel Pacy was a rich merchant who lived in the town of Lowestoft, Suffolk in the middle of the 1660s. The son of Nicholas Pacy, a local marriner who had become a fish merchant in the town, Samuel was a property owner and carried on the family tradition of dealing in fish caught by Lowestoft's fishermen. It is thought that he owned his own boats and had part interests in others. He was also a property developer and he served his local community in a number of semi-official capacities. If we do a search of the Parish Records on TheGenealogist for his baptism this is returned in a record for the 8th January 1623 at the church of St Margaret in Lowestoft.

These records are linked to images of the page of the actual register so that you are able to see any extra information that may not have been transcribed. In the case of his burial on 18th September 1680 we are able to make out that his family were prepared to pay the fine rather than to bury him in a shroud of pure wool as the Burial in Wool Act 1666-1680 required. While others on the page are noted to have 'The affidavit brought', Samuel has 'the forfeiture paid' next to his entry in the parish register. This was normally a fine of £5 which in today's money would be over £820 using the purchasing power measure to work out the value. A considerable amount for not complying with the law of the land. 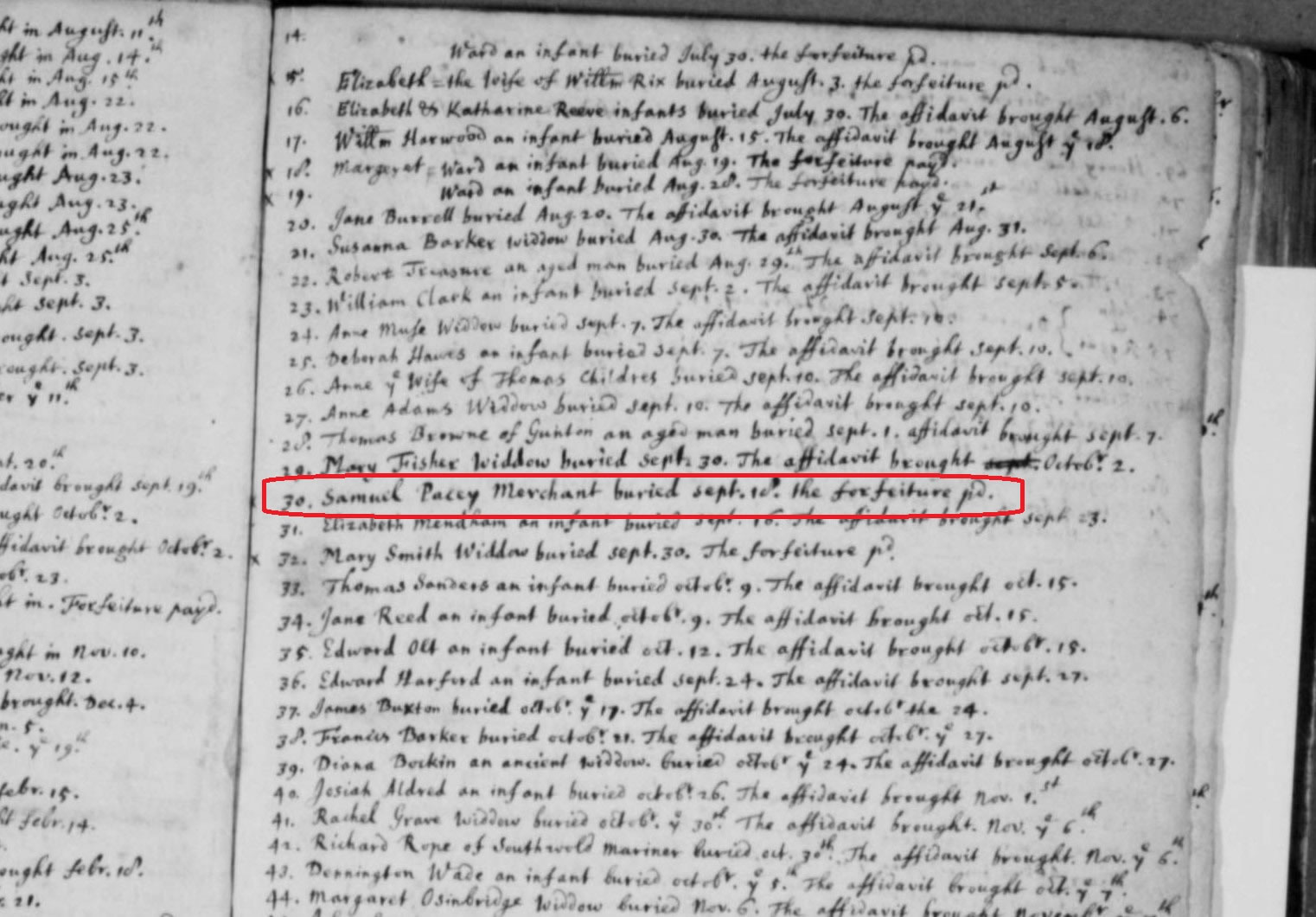 Burial of Samuel Pacey, Merchant, 18 September 1680 (note alternative spelling of his surname) in the Parish Register for St Margaret's Lowestoft as seen on TheGenealogist.

According to the blog Norfolk Tales, Myths and More! our Lowestoft merchant accused two elderly women, Amy Denny and Rose Cullender, of bewitching his daughters Elizabeth and Deborah. The matter was considered serious enough for it to be sent to be heard before Sir Matthew Hale, Kt, Lord Chief Baron of the Exchequer sitting as judge at Bury St Edmunds. The circumstances of the case were that Samuel had refused to sell some fish to Amy Denny, a poor widow who was already suspected of being a witch by the townsfolk. This refusal to sell her fish he did three times and immediately after the last rejection his daughter Deborah suffered fits and extreme pain in her stomach. Later on her elder sister Elizabeth also succumbed to fits and this situation continued for several months with other symptoms also manifesting themselves including coughing up pins and nails.The girls also claimed that Rose Cullender would appear with Amy Denny and that both would threaten the young women with worse should they tell anyone. The afflictions then spread to other girls who were neighbours of Samuel Pacy in the High Street, Lowestoft but were not related in any way. After a two day trial in March 1664 in which the evidence was put before the court inevitably the two unfortunate women were condemned to death and hanged four days later. With the old women's convictions, the victims of the 'witches' made recoveries from their bewitching and miraculously returned to normal.

Samuel went on to live in Lowestoft for a further sixteen years until 1680 at which time he was buried in the chancel of St Margaret's church, to be joined by his wife in 1682. A visit to the church today will see his grave has been walked over by centuries of worshipers' feet so that the inscription is worn away. When Samuel died he was wealthy enough to leave several high value bequests and his will was proven at the Prerogative Court of Canterbury (PCC). As such it can be discovered within the PCC wills on TheGenealogist where images of the pages can be seen and read. 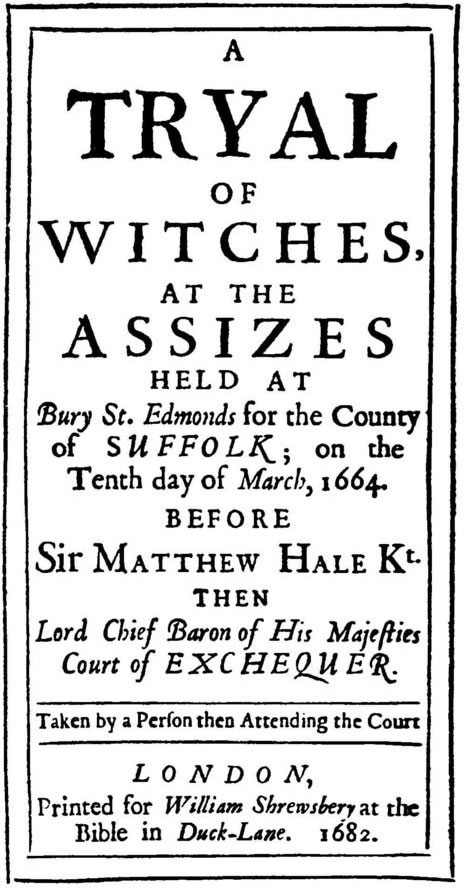 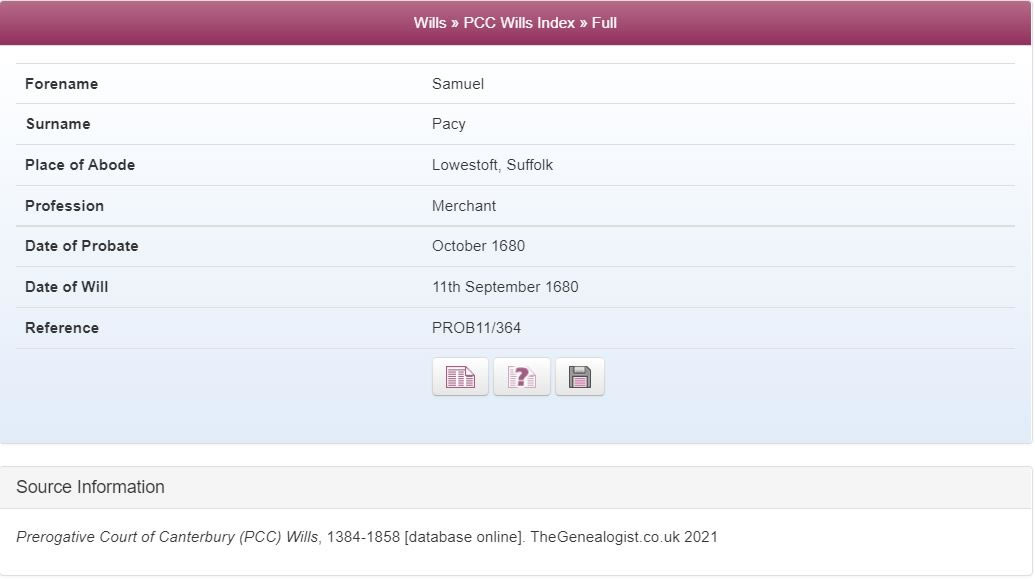 PCC Will transcript for Samuel Pacy, Merchant of Lowestoft on TheGenealogist 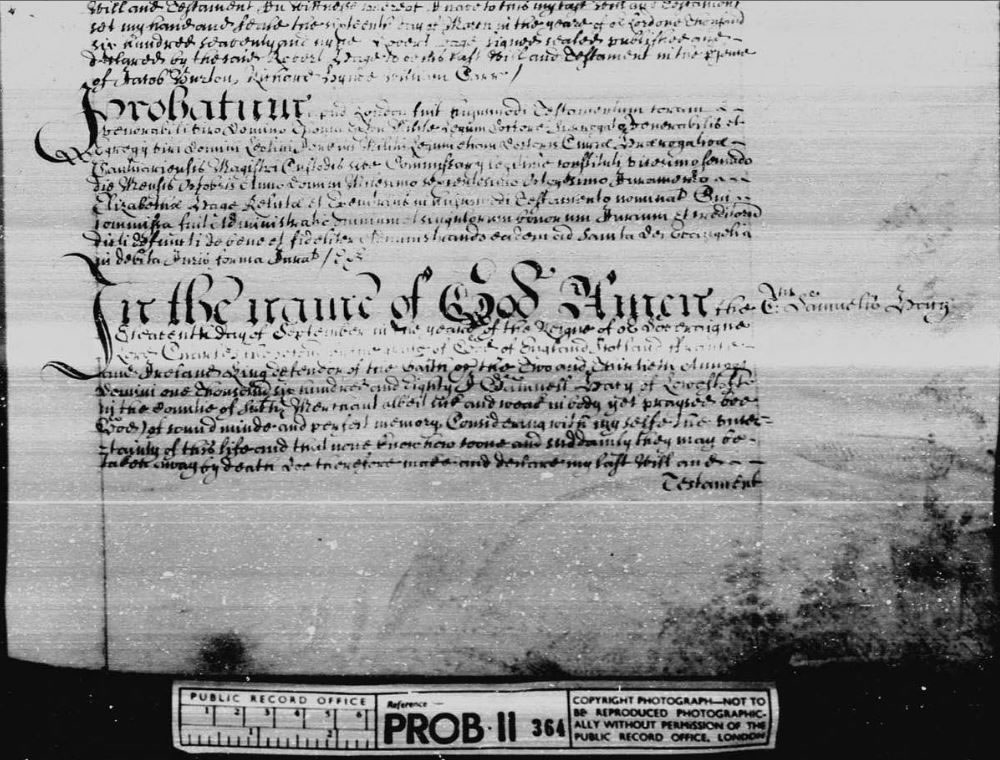 Image of PCC Will of Samuel Pacy, Merchant of Lowestoft on TheGenealogist

When researching our ancestors prior to Victorian times Parish Records are one of the most important recordsets that a researcher can use to look for their ancestors possibly as far back as the 16th century. While earlier examples of parish records may not provide all the details about an ancestor that later ones typically did, they can still be very useful in jumping back generations when used with other information that you have about an ancestor.

TheGenealogist has transcribed millions of parish records to make them fully searchable for researchers to find their ancestors. A powerful feature of this website is its SmartSearch which allows family historians to make use of the information that they already know to get past any brick walls with finding other members of the family. Using the SmartSearch, within the Parish Records, allows one to search across other records to find the potential parent's marriage, potential baptisms of children from the marriage record or to view potential siblings of the child being baptised. Thus with Samuel Pacy we can easily find a number of potential brothers and sisters for our Lowestoft born merchant in the records for that town. 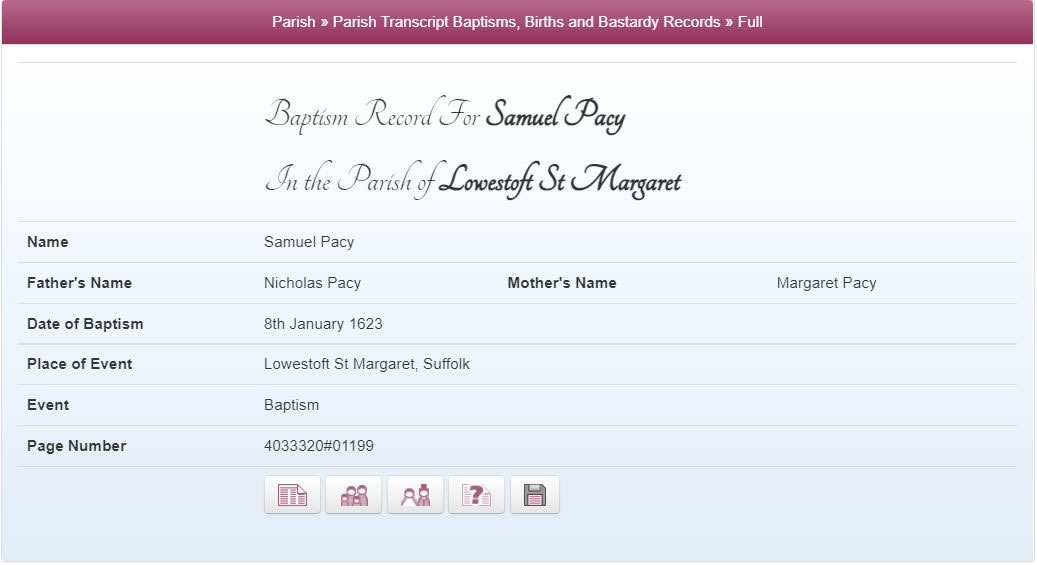 Transcript of the baptism record for Samuel Pacy from TheGenealogist's Parish Records Collection with SmartSearch buttons below.