To many of us, a mention of Ealing will automatically trigger happy memories of watching the quintessential British films that came out of the studios in this west London borough. Even today it is still producing films and has become the oldest continuously working studio facility for film production in the world. (Source: Ealing Studios – History https://ealingstudios.com/about-ealing/history-3/)

It was William George Barker (18 January 1868 – 6 November 1951) who was a British film producer, director, cinematographer, and entrepreneur that first purchased the West Lodge on Ealing Green in 1902 as a base for making films. Barker is credited with taking film-making in Britain from its early days of low budgets to reach the levels of lavishly-produced epics that were equal to Hollywood for quality and style. Will Barker, as he was known, had bought the site in Ealing in 1902 and so he is recorded in the IR58 Lloyd George Domesday Survey records, that have been released on TheGenealogist, as both the owner and occupier. These property tax records from the 1910s list the description of the property at West Lodge, Ealing Green, as being a House, Studio, Stables & Premises. Will Barker's address is given as at Westmorland Lodge, on Ealing Green and this house is also recorded in these land tax records where its address is revealed to be on the Uxbridge Road, about a mile away from the site of the studios.

The founder of the Barker Motion Picture Company had originally been a travelling salesman who worked as a cameraman in 1897 on a film about Queen Victoria's Diamond Jubilee. His interest in film-making saw him start the Autoscope Company in 1901 at 50 Gray's Inn Road, Holborn. Here his company made moving pictures on a hand cranked Lumiere camera and then showed the resulting films to the public for a fee. With his purchase of the property that became Ealing Studios he began to make films with actors from whom he required higher levels of acting skills and he would use authentic locations in his motion pictures. 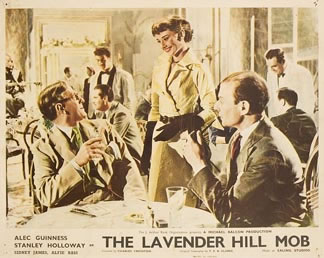 In 1929 the theatre producer, Basil Dean, having formed Associated Talking Pictures Ltd acquired the studios and built the 1930s studios on the site while the Lodge, by now known as the White Lodge, became the offices. Many British films were made here but it will be forever best known for the classic post-second world war films such as Kind Hearts and Coronets (1949), Passport to Pimlico (1949), The Lavender Hill Mob (1951), and The Ladykillers (1955. Ealing Studios became closely associated in the minds of the public with British Comedy classics that would become the hallmark of the studios.

From 1938 Ealing Studios then had a new boss when it was run by Sir Michael Balcon, a pioneer of British films who made pictures under the Ealing Studios name. In 1944 it was taken over by the Rank Organisation. The BBC bought and ran the studios from 1955 to 1995 and then the corporation sold the studios to the National Film and Television School. Since 2000 it has been owned by a consortium and has begun to produce theatrical films once again.

The Studios caught in the Lloyd George Domesday records

Using the IR58 Lloyd George Domesday Survey records for Ealing available to Diamond subscribers of TheGenealogist we can see that West Lodge, as it was once called, has a pin plotted on the georeferenced maps. Using Map Explorer's ability to show us the same point on a map we can see that today the studio complex is spread over a larger site than when Will Barker first bought the house and grounds, as recorded on the corresponding Lloyd George Domesday Survey map. 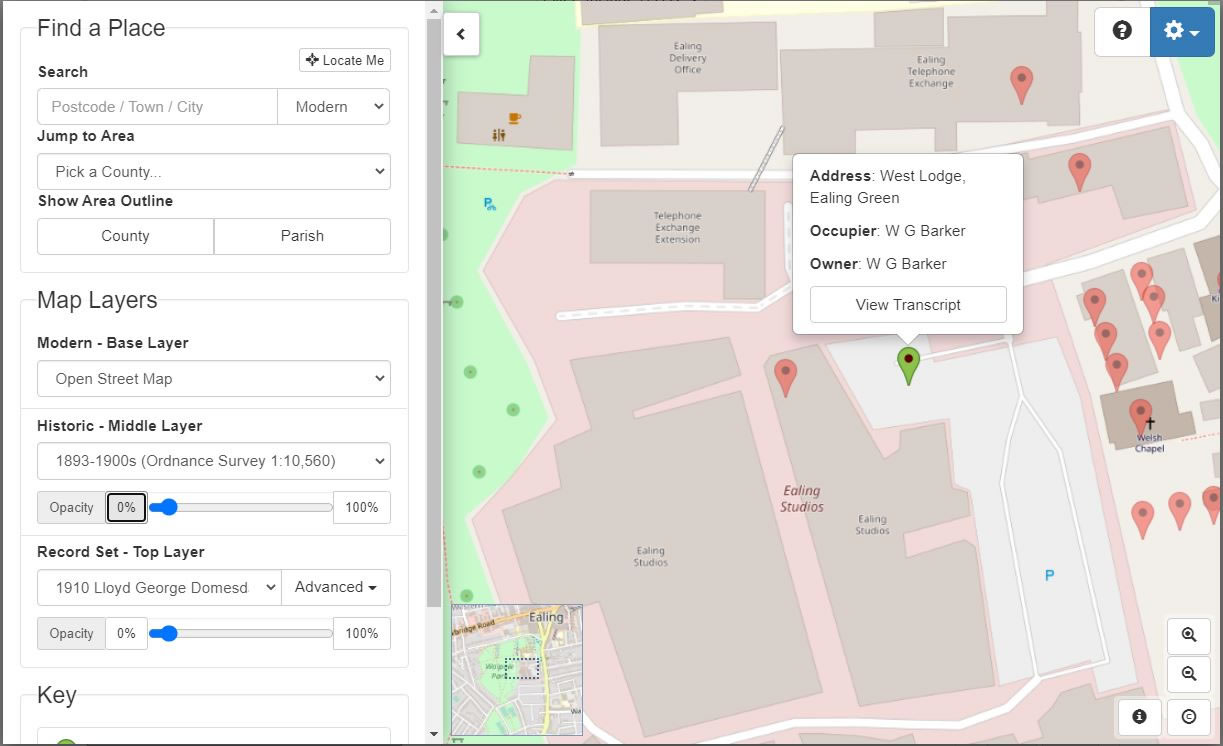 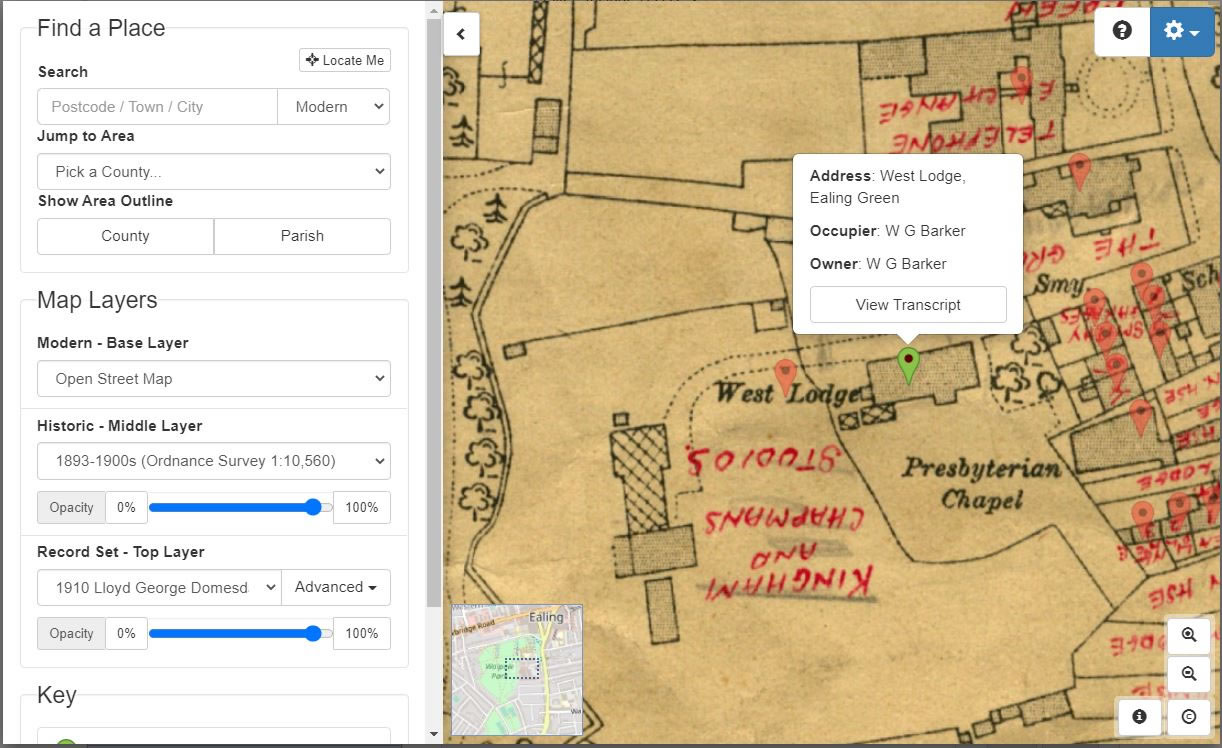 The linked Field Books for West Lodge reveals that it was owned freehold by Will Barker from November 1909 for which he had paid £3500 (£373,000 in today's money) with a further £1500 spent for the Cinematograph Glass Studio. The description of the property tells us that Will Barker owned an "old brick built and slated house on 2 floors." On the top floor were 5 bedrooms, a box room and a bathroom. There were brick built stabling which no longer saw any horses as they were used at the time for storage. There was also a Large studio which merited no further explanation! But a bracketed line underneath explains that a Larger Studio was not erected on the 30th April 1909 – a date before the recorded purchase of West Lodge on the page before of field books that form a part of these fascinating land tax records. 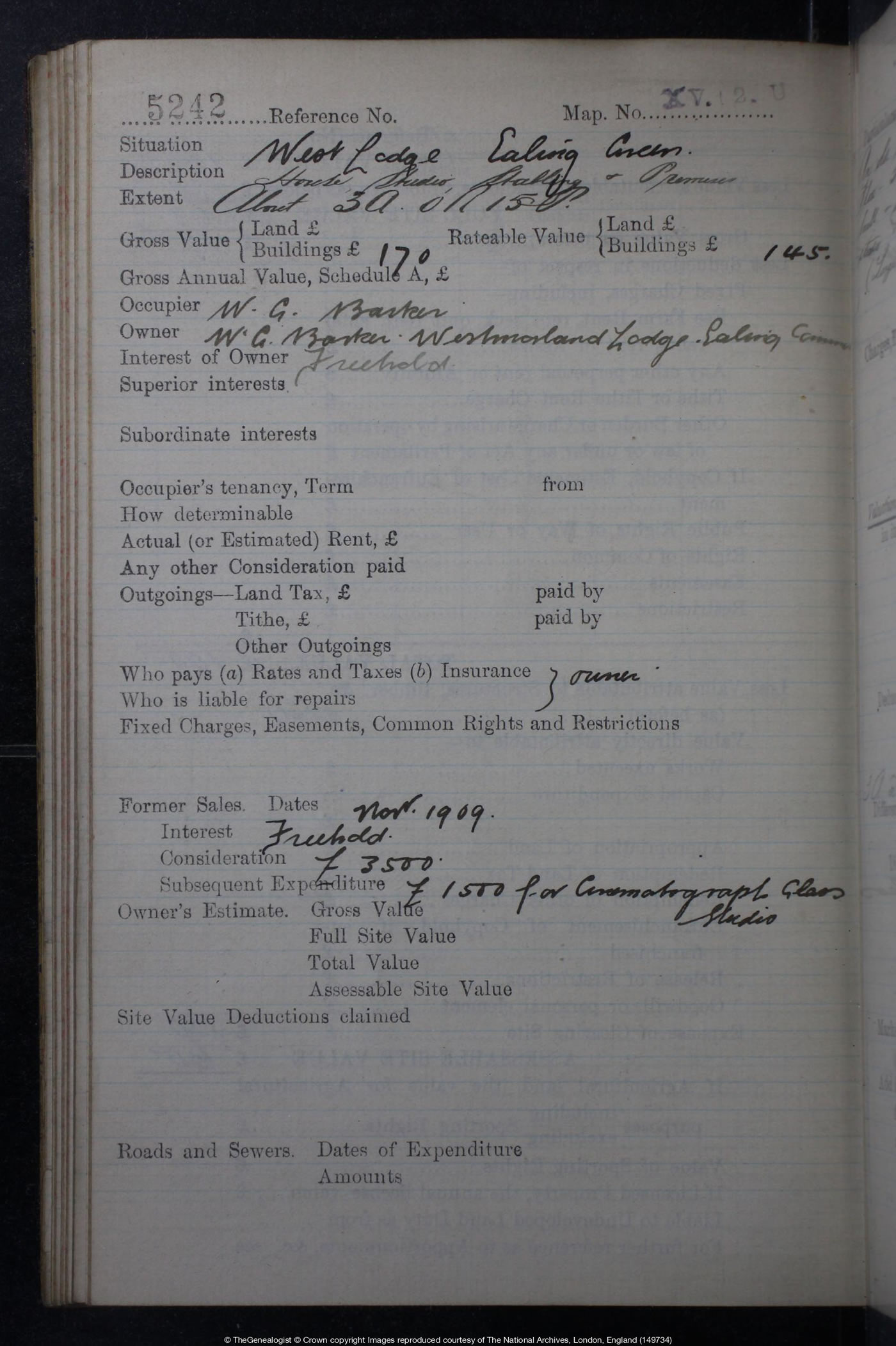 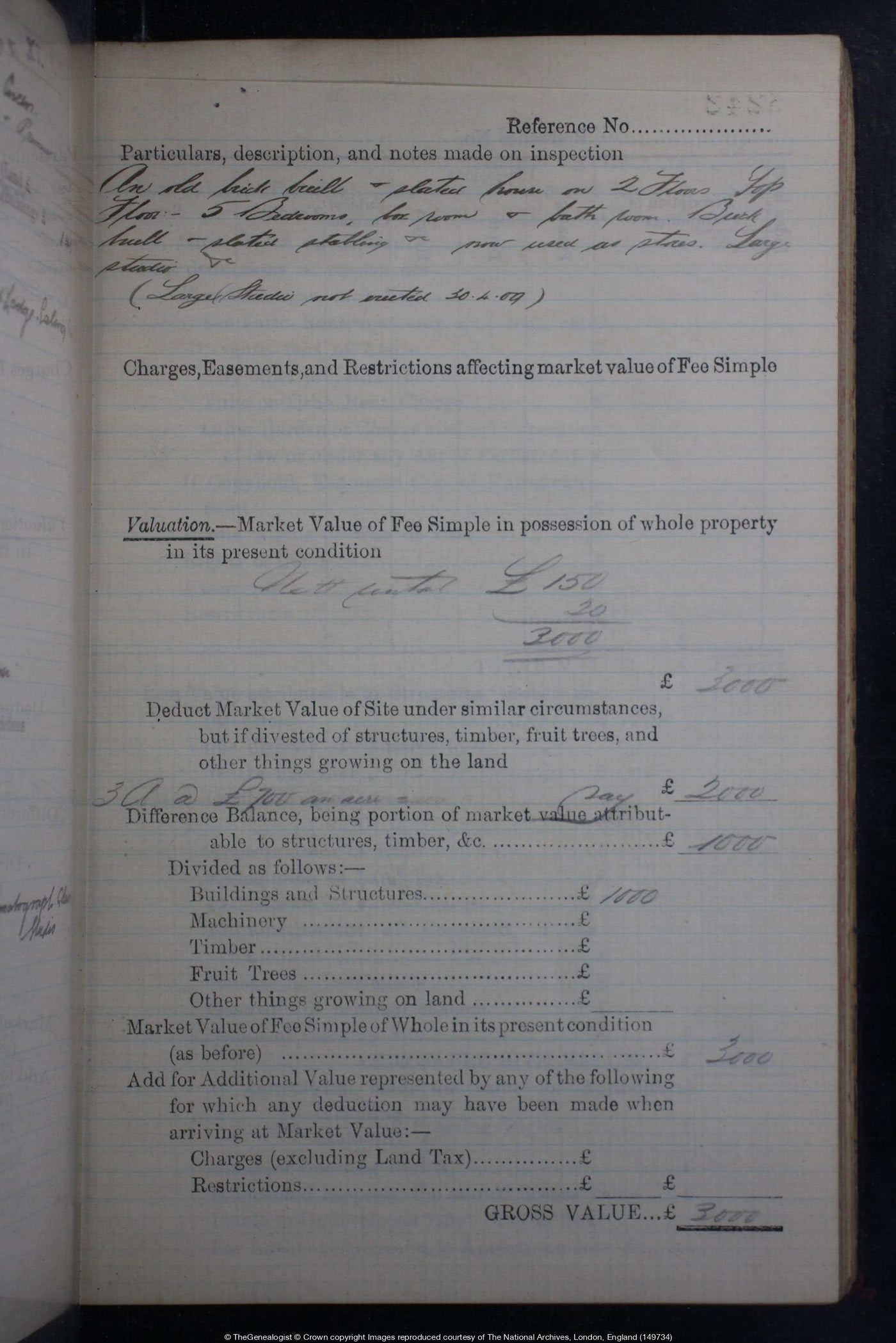 Researchers can use these property tax records in conjunction with some of the other records on TheGenealogist such as census, street directories etc. in order to build a better picture of the environment in which your ancestors worked, lived or played. The IR58 records can be searched in a number of ways including by a person's name or by county, parish or street and benefit from being linked to detailed maps from the time displayed on the Map Explorer where they are presented as a georeferenced layer over modern and historical maps of the same area.