Travelling back in time with MapExplorer™ in your hand

As winter makes way for springtime there is nothing better than to grab our comfortable walking shoes and get out into the countryside. While out in the fresh air we may look around at our surroundings and wonder what it had been like there in the past. Who were the people that walked these fields, roads or paths and what happened here?

The latest feature of TheGenealogist's Map Explorer™ allows you to travel back in time and see how an area has changed over the years and with its "locate me" function when using the tool on a mobile phone can open up the history of what is around you. You may be looking at a building and wonder who its occupants were. Now, with the addition of the georeferenced tithe map layer to the Map Explorer, you can now see the lay of the land from early Victorian times through the period around the end of the 19th century and on to modern times. The powerful interface provided by TheGenealogist makes use of various maps from historical tithe and ordnance survey maps up to present day street maps and satellite maps. These will show the same point on each plan and by using the opacity controls we can fade up and down each map layer to see how the land developed.

Take the beautiful country house in Lacock, Wiltshire in the ownership of the National Trust as an example. Using our mobile to find Lacock Abbey on the Map Explorer™ we sign into TheGenealogist, open the Map Explorer™ and click "locate me" on the dashboard. By selecting the Tithe Record Collection as the Record Set to be the Top Layer takes us back to the early part of Queen Victoria's reign. This reveals that Lacock Abbey was once owned and occupied by William Henry Fox Talbot Esquire at the time of the National Tithe Survey was carried out in Wiltshire in 1839.

Using the power of the mapping interface created by TheGenealogist we can now look at how the area looked in the 1890s-1900s Ordnance Survey and also, by fading up the base layer of a modern map, see how the A350 has cut through the land to the left of the village. By changing the modern map to a satellite view allows us to recognise just how some of the surrounding farms have grown and developed over the years. 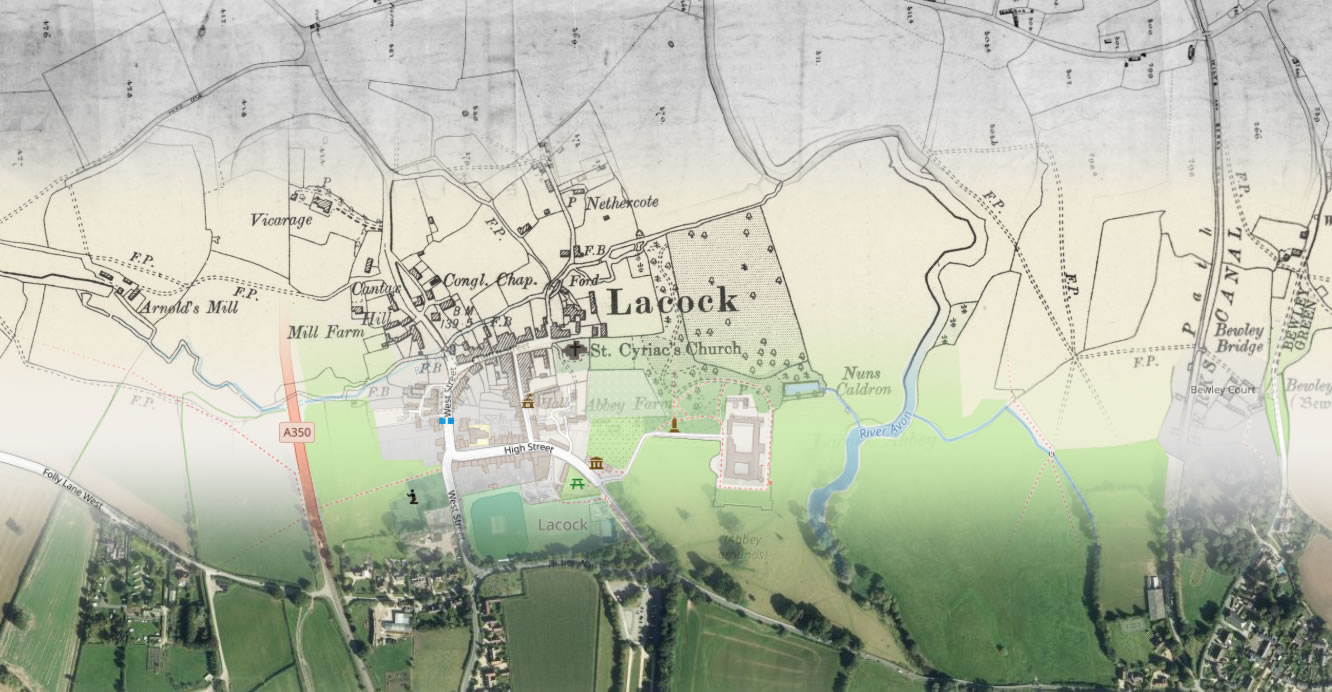 To the right of the house we can see what is today the unnavigable Wilts & Berks Canal on the 1890s-1900s Ordnance Survey map. This waterway is not to be found on either the Tithe map or on the modern street map so indicating that its existence was short lived. We can, however, trace a line of trees that follows its previous path by looking at the modern Bing Satellite map.

The Photographer and his home

William Henry Fox Talbot, the owner and occupier in 1839 when the house and land was surveyed, is a well known figure from photography who in September 1840 discovered the phenomenon of the latent image. It is said that this was a chance discovery, when he attempted to re-sensitize some paper which had failed to work in previous experiments; as the chemical was applied, an image, previously invisible, began to appear.

This major breakthrough led to drastically lowered exposure times - from one hour or so to 1-3 minutes. Talbot called the improved version the calotype. He patented his invention on 8 February 1841 and asked large sums of money for the rights to use his process. This move played into the hands of M. Daguerre, the inventor of the popular daguerreotype process.

The house had passed into the hands of the Talbot family in the 1700s, and during the 19th century it was inherited by William Henry Fox Talbot. In 1835 he made what is thought to be the earliest surviving photographic camera negative, an image of one of the windows from Lacock. 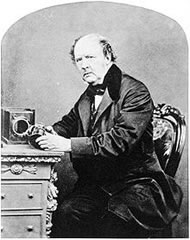 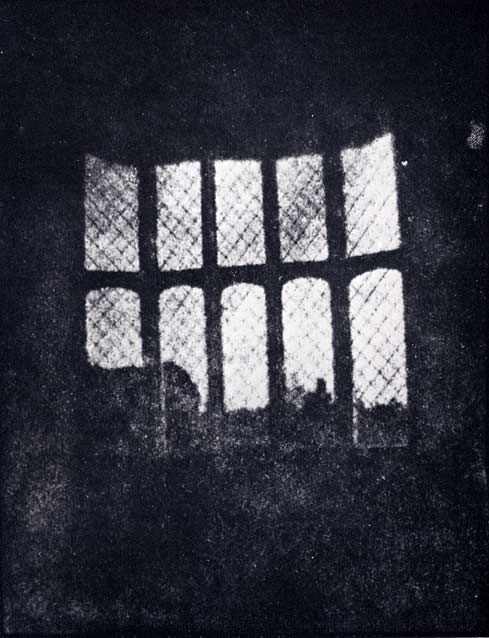 Window in the South Gallery of Lacock Abbey made from the oldest photographic negative in existence, William Fox Talbot (1800-1877)

The house, a Grade I listed building, and the surrounding village of Lacock were gifted to the National Trust in 1944. Today the abbey is the home of the Fox Talbot Museum, given over to the pioneering photographic work of William Talbot. 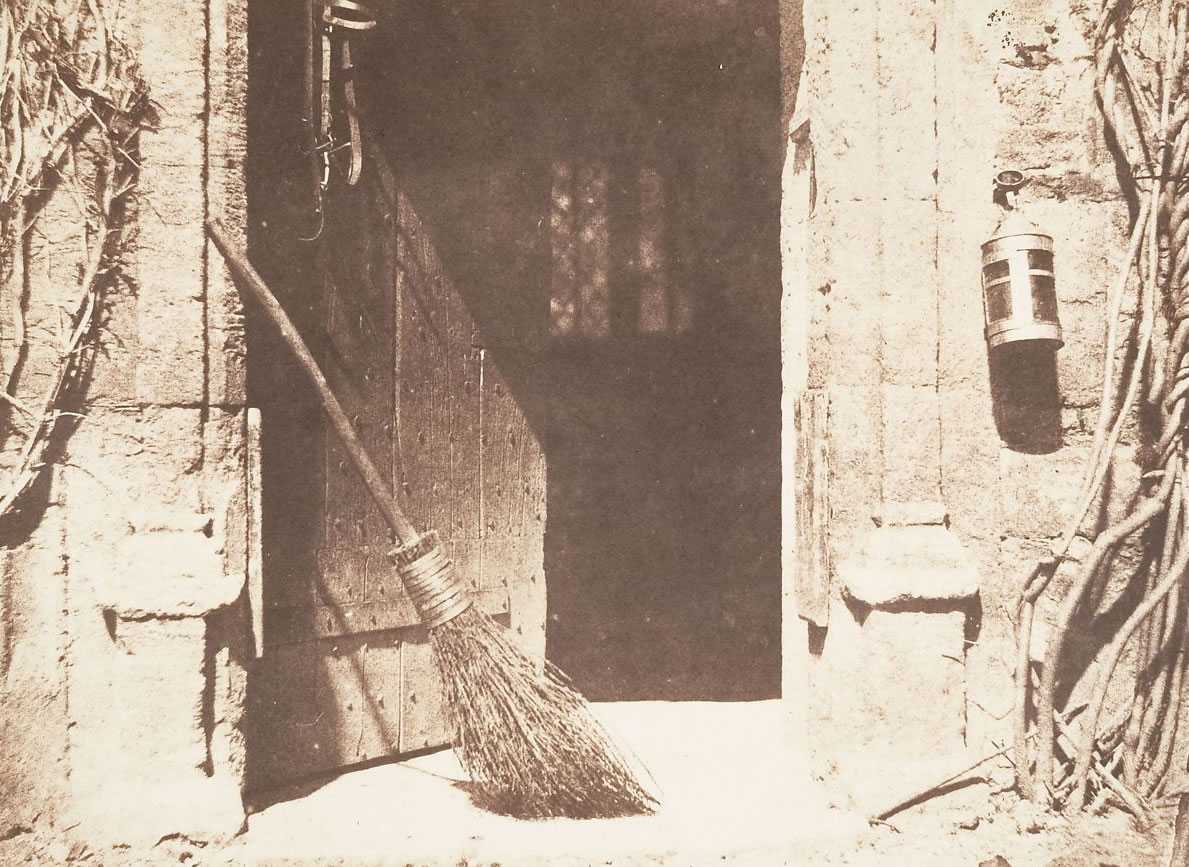 The Open Door by Fox Talbot

The Earlier History of Lacock Abbey

The religious house that once stood here was founded by Ela, Countess of Salisbury in the early 13th century, as an Augustinian community of nuns. It remained a nunnery until the suppression of Roman Catholic institutions in England in the 16th century under Henry VIII. With the dissolution it was then sold to Sir William Sharington and he converted his new purchase into a residence for himself and his family to live in. Lacock Abbey was fortified and remained a Royalist house during the English Civil War until 1645, with the fall of Devizes it surrendered to the Parliamentary forces.

The country house called Lacock Abbey was built over the old cloisters of the nunnery and its main rooms are found on the first floor. Of stone construction with stone slated roofs, twisted chimney stacks and mullioned windows it has undergone many architectural alterations, additions, and renovations over time so that what we see today is a building made up of a medley of different periods and styles. The stable courtyard to the north of the house is Tudor and has preserved many of its original features including the brewhouse and bakehouse.

TheGenealogist's Map Explorer™ is a great tool to take with you on a walk in the country, or to do desktop research at home. It has the ability to reveal how the landscape of our countryside has changed over time and reveal those that owned the land and properties as well as those who occupied them. We have seen just how taking TheGenealogist with you on your springtime walks can open up the history around you in this example of a stroll past Lacock Abbey.