What makes the Index of Irish Wills 1484-1858 a significant resource for researching your Irish ancestors?

It is always satisfying in family history when a record set provides the researcher with answers. This is even more rewarding when it is in an area that is well known for the difficulty caused by the loss of many crucial records which were destroyed when the Public Record Office of Ireland burned down in 1922. For this reason, if you are able to find some details from your Irish ancestor's will in this Index it could be the turning point for you in breaking down a brick wall. When a person can be found listed in this recordset it means that there is either an actual surviving document, a copy of document, a transcript, an abstract or an extract of the will to be found in the National Archives of Ireland (NAI).

Discovering an ancestor's will listed in this index on TheGenealogist can provide us with some very useful information such as their names and the names of their executors, their date of death etc as written in an official record. We may also be able to use the information noted in these records to discover other past members of the family and to see interesting details such as where they lived at the time of their death. 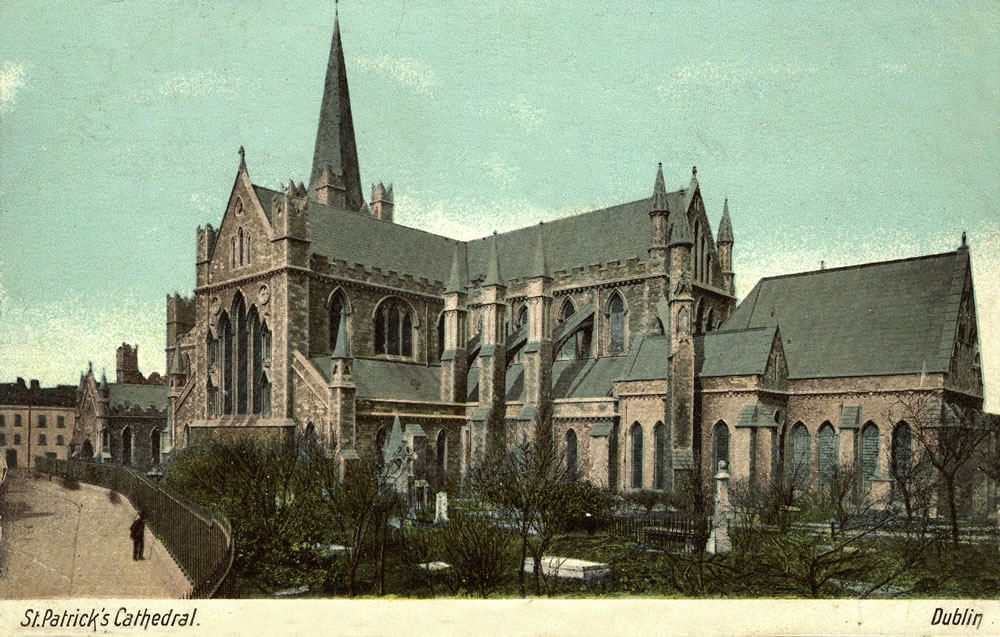 What are the Irish will records that can be searched?

TheGenealogist has released the Index of Irish Wills 1484-1858, which include records that have been identified in all the National Archives card catalogues as well as those in the Inland Revenue Will Registers and Administration Registers 1828-1839. It is an index to actual records that have survived.

Prior to 1858, Irish wills were administered by the ecclesiastical courts of the Established church, that is the Church of Ireland. The Church of Ireland is part of the Anglican communion and is not to be confused with the Roman Catholic Church, even though this second denomination has the largest following in the country. In 1857, however, the Church of Ireland lost its responsibility for Irish Wills when the Probate Act of that year transferred the supervision to the state.

In the period when the Church of Ireland dealt with testamentary matters the central Prerogative Court was under the jurisdiction of the Archbishop of Armagh in his role as the Primate of Ireland. This was the highest court dealing with testamentary matters often concerned with the deceased who came from the wealthiest sector of Irish society. Below the Prerogative Court came a series of diocesan and consistory courts in each diocese.

The Index of Irish Wills 1484-1858 is a comprehensive index to the testamentary records that are held in the National Archives of Ireland (NAI) and covers all 32 counties of the island of Ireland.

Consulting this resource the researcher will find that the names of the deceased within each of these annual indexes are organised in strict alphabetical order by name of the testator. The information included in the Calendars list the name, address and often the occupation of the dead person; the date and place of grant of probate or administration. The records can also include the names and addresses of the executors or administrators.

In which depository are the Irish wills stored?

Irish wills records that survived for this period are kept in the National Archives of Ireland (NAI). You can use TheGenealogist's powerful search of the Index of Irish Wills 1484-1858 to find details recorded about your ancestors though the original documents are only viewable in the Reading Room of the National Archives of Ireland, or a copy can be ordered from them for a fee. For further information on ordering a copy please go to: http://www.nationalarchives.ie/visit-us/obtain-copies-of-archives/ 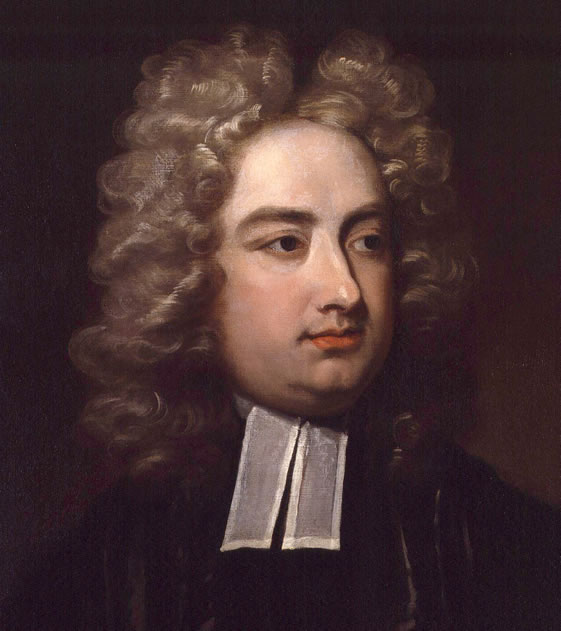 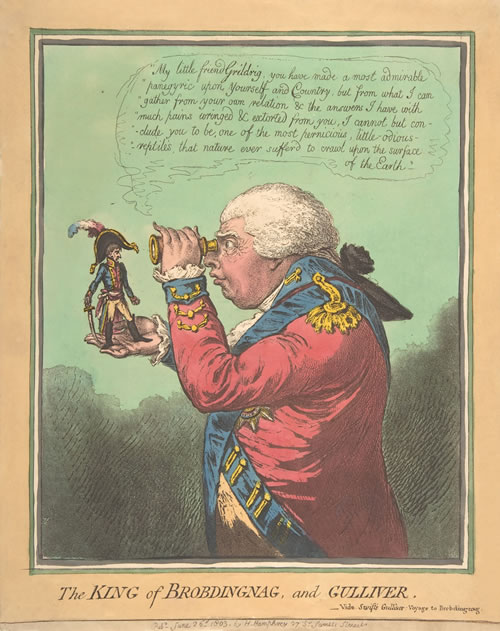 The King of Brobdingnag and Gulliver by James Gillray

There are many well known people in these records including the author Jonathan Swift. He is remembered for works such as Gulliver's Travels, A Tale of a Tub, An Argument Against Abolishing Christianity, and A Modest Proposal. Swift is famous for his deadpan satire and the success of Gulliver's Travels, which is still a popular tale that has been retold many times both as stories and in films. This renowned author originally had his works published under various nom de plumes including Lemuel Gulliver, Isaac Bickerstaff and M. B. Drapier, as well as even having some released anonymously. 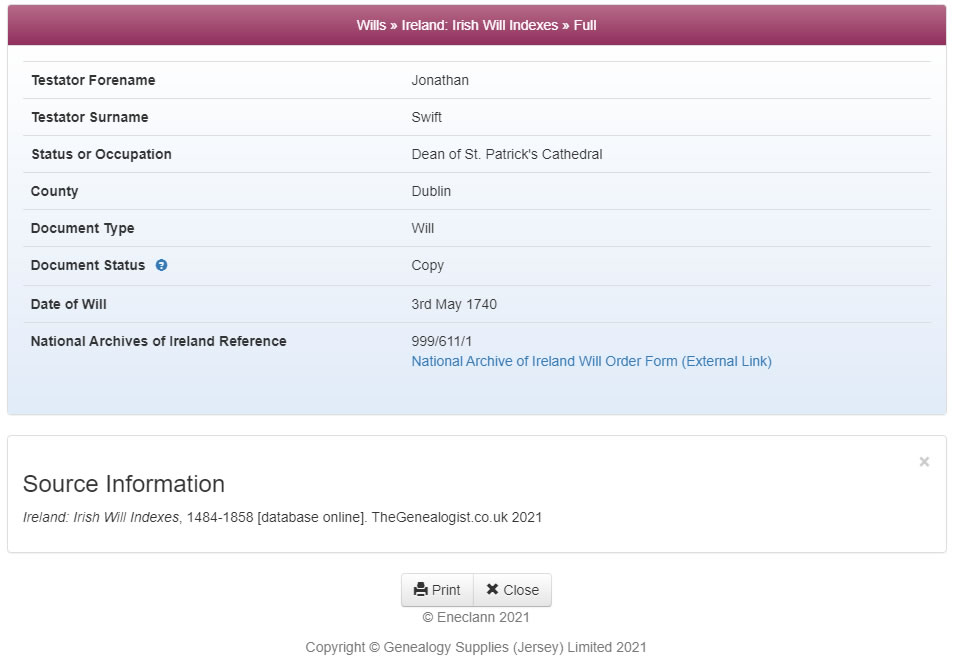 Biographica Dramatica gives a full account of his life with its many twists and turns. In 1682, for example, he went to college in Dublin, but was not a good scholar at the time. The Biographica Dramatica reported that "While there [he] discovered no promise of any superior abilities. In 1685, after having been refused his degree of bachelor of arts for insufficiency, he was admitted speciali gratia, which in that university is considered as the highest degree of reproach and dishonour." In the next seven years he then began to apply himself studying for eight hours a day.

In 1688, his uncle, who had supported him, died and so on his mother's recommendation he made himself known to Sir William Temple, "who received him with great kindness, and entertained him at his house". On the 14th of June 1692, Swift was then admitted B.A. at Oxford, and on the 5th of July of that year he took his master's degree. In the year 1694, a difference arose between him and Sir William Temple, which saw their parting, and Dr. Swift soon after entered into holy orders. He went on to take the Degree of Doctor of Divinity and became eminent as a writer. In the later years he would be appointed Dean of St Patrick's Cathedral in Dublin as his clerical career reached its peak.

In the last part of his life Jonathan Swift was afflicted with fits of deafness and giddiness, which terminated in, as the Biographica Dramatica chronicles, "a state of idiotism". He died in October 1745 and left his fortune to endow St Patrick's hospital for the reception of lunatics as we can see from the entry in the Dublin Almanac for 1846 on TheGenealogist.

The entry for St Patrick's Hospital in the 1846 Dublin Almanac

Jonathan Swift is featured in The Dictionary of National Biography Stow-Tytler Vol. XIX on TheGenealogist and a search of the Educational records also on The Genealogist show him spending his undergraduate life in Dublin before being awarded his Oxford B.A. from Magdalen Hall in 1692 and then later an M.A. from this ancient university (Oxford Men and their Colleges on TheGenealogist).

There are many articles in the Illustrated London News which can be searched and viewed in the Newspapers & Magazines collection on TheGenealogist and Jonathan Swift appears in a host of other records to be found on TheGenealogist, not the least of which is his will record from May 1740.