View your ancestor's home town as they would have seen it, using the Image Archive on Map Explorer™

Wouldn't it be great to be able to see where our ancestors lived through their own eyes? The world inevitably moves on and places have changed over the years. In many areas of the country we can, however, use a combination of records, photographs and maps to build a picture of what the streets around our ancestors' homes looked like. Old photographs or drawings give us a better feel for how a place may have appeared in past times. Historical maps can reveal the layout of streets that today have been widened, rerouted and had the buildings demolished to make way for modern developments.

We often turn to a map to try to find a road where our ancestors lived, or to find the Parish Church where they were baptised, married or buried. Sometimes the modern map fails to identify the locality because, with the passing of time, the spot has disappeared under a modern road or a high rise building. It is at times like these that we need a solution in the form of a tool that can show us images of how a particular place once looked, as well as revealing how the old street layout compares with the new. TheGenealogist Map Explorer™, with its recently added Image Archive recordset, is such a resource.

The Gothic Grammar School lost beneath a road junction

In the 1930s my father, whose family had moved up to the Midlands from the West Country, began going to school at the King Edward's Grammar School at Five Ways, Birmingham. I had often wondered where that had been as Five Ways today is simply a huge roundabout with a sunken pedestrian underpass garden. The school itself is many miles away now, having relocated in 1958 to Bartley Green in the South West of the city. 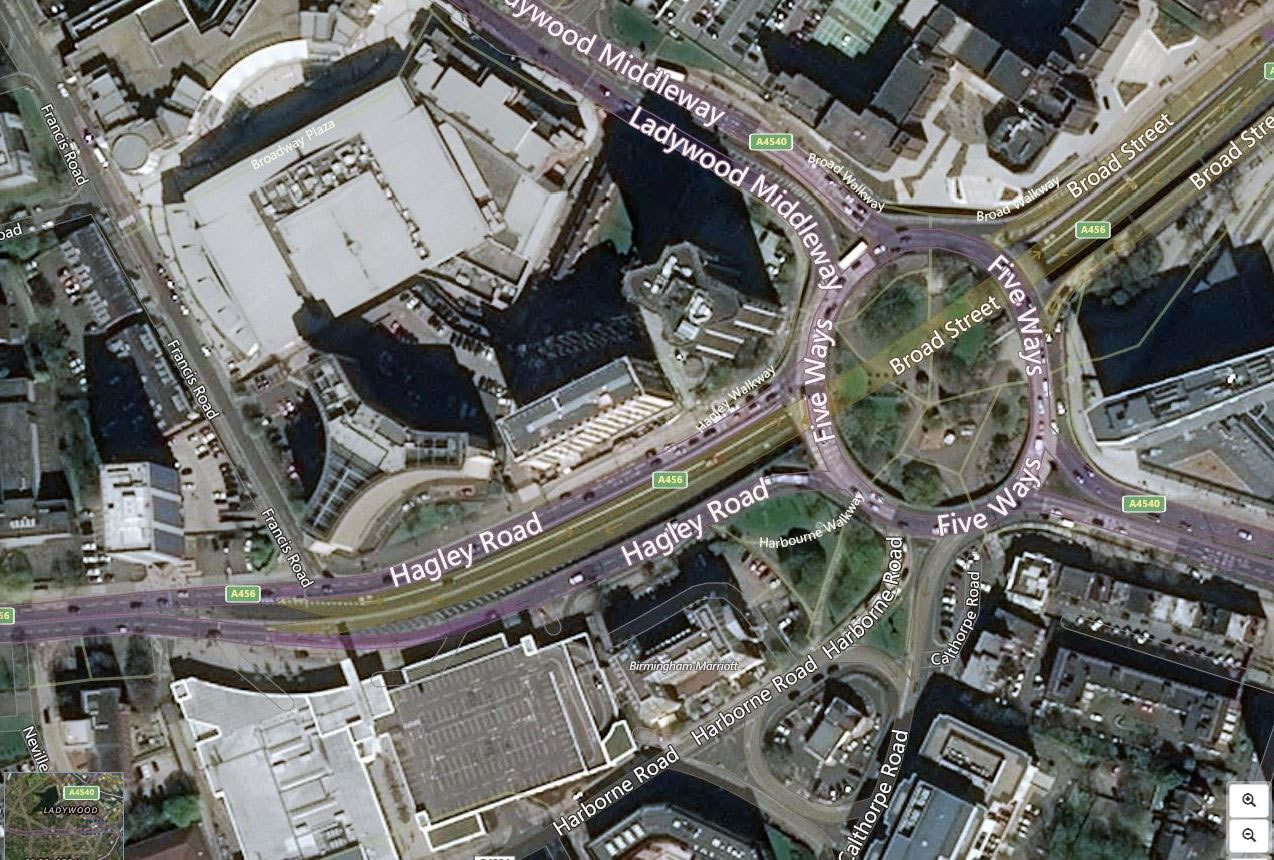 Wanting to add this detail of where my father had gone to school to my family history, I searched for the institution's address from before 1958. The answer was provided by the 1903 Warwickshire Kelly's Directory of Birmingham in the Trade Residential & Telephone collection on TheGenealogist. This gave me the school's onetime address as having been at 19, 21 & 23 Hagley Road.

Turning to the Map Explorer™ and searching for Five Ways, Birmingham the historical map layer showed me the grammar school clearly marked on the 1893-1900s Ordnance Survey 1:1,056 map at the Five Ways junction of the Hagley Road. I then used the versatility of the Map Explorer ™ to see where this would have been on the modern map that is geolocated precisely under the historical map in this mapping tool. The black shaded outline of the Grammar School building clearly shows up on the historical map and, because the coordinates of both the old and the modern map are precisely aligned, changing the transparency of the display allows the modern map to fade in. This finally revealed to me that the footprint of the Victorian building has been lost forever under the southwest quadrant of the present day circular junction. 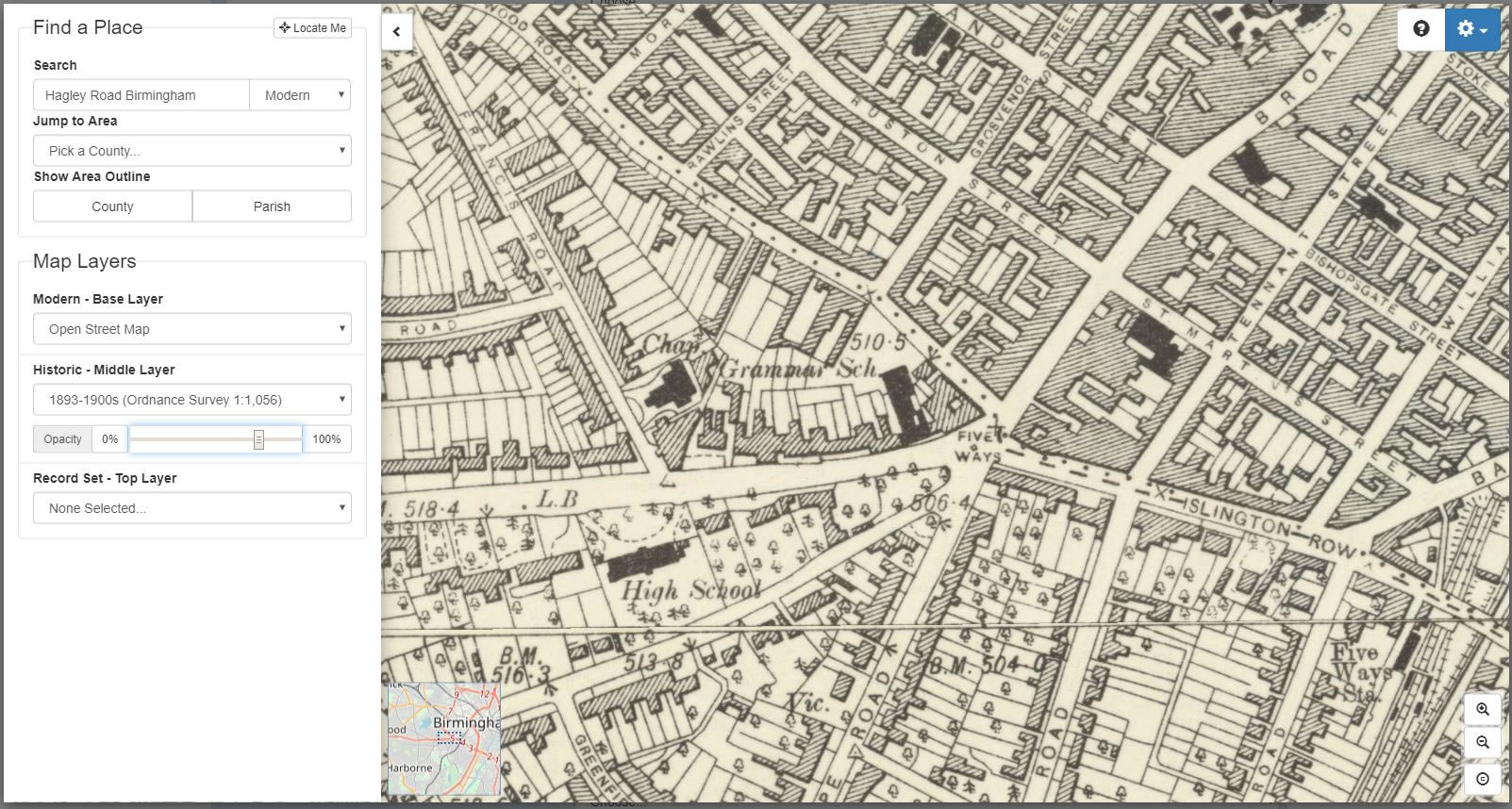 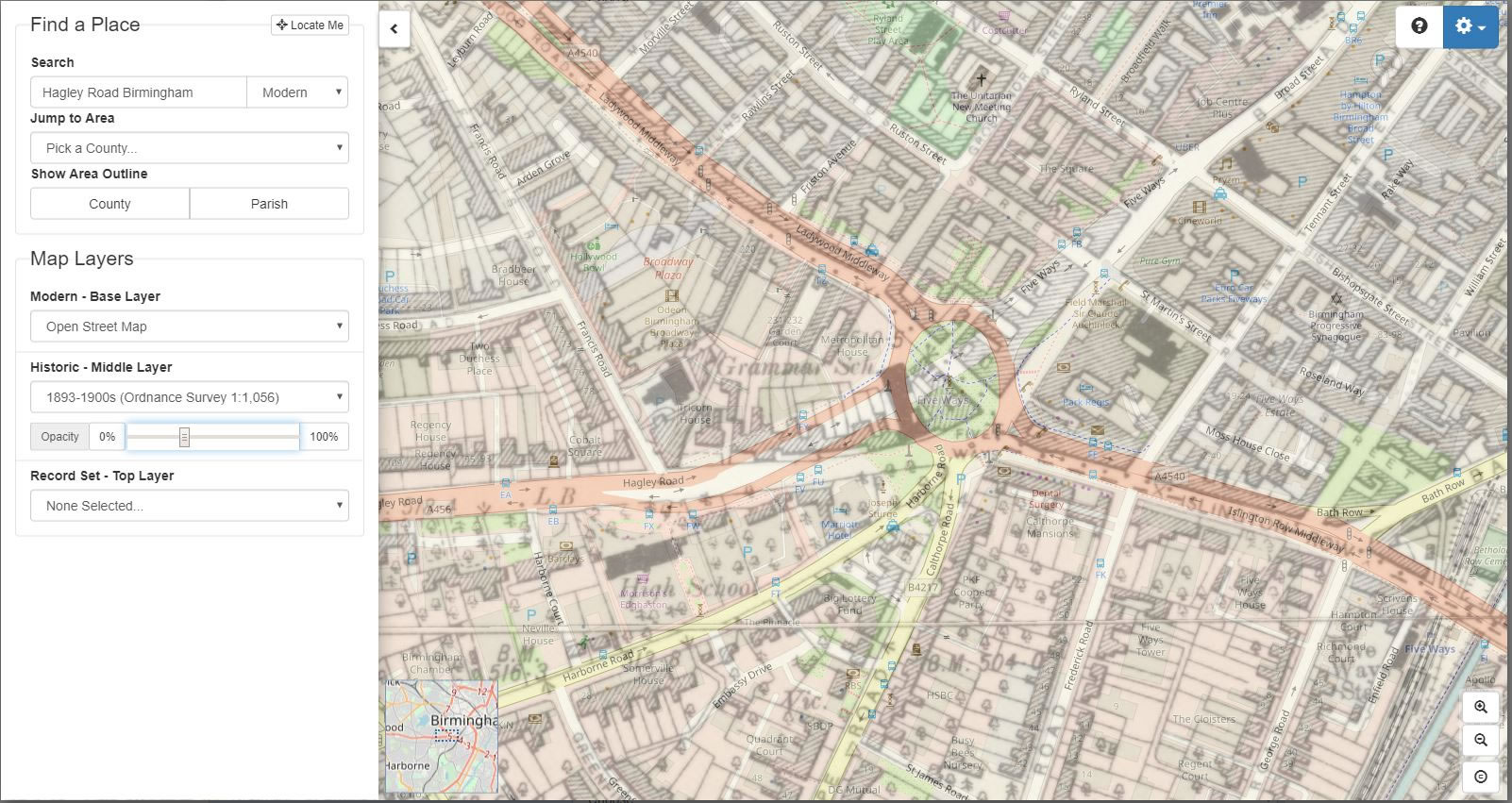 A picture paints a thousand words

I then began wondering what the old Five Ways, as shown on the historical map, had looked like before it had its radical makeover in the 1960s. The most recent addition to the features of the Map Explorer is the ability to select as the recordset TheGenealogist's Image Archive. By setting the Image Archive as the recordset it now displays pins on the map of any pictures that TheGenealogist has of an area. In the example of this corner of Birmingham, when we choosing this option we are able to see an image of the street scene from circa 1895-1900.

When we view a record, we're shown the photo position, photographer position, along with a modern map and street view (where available) so that we are able to compare the image with how the area looks like now. In the case of Five Ways, it is extremely different! 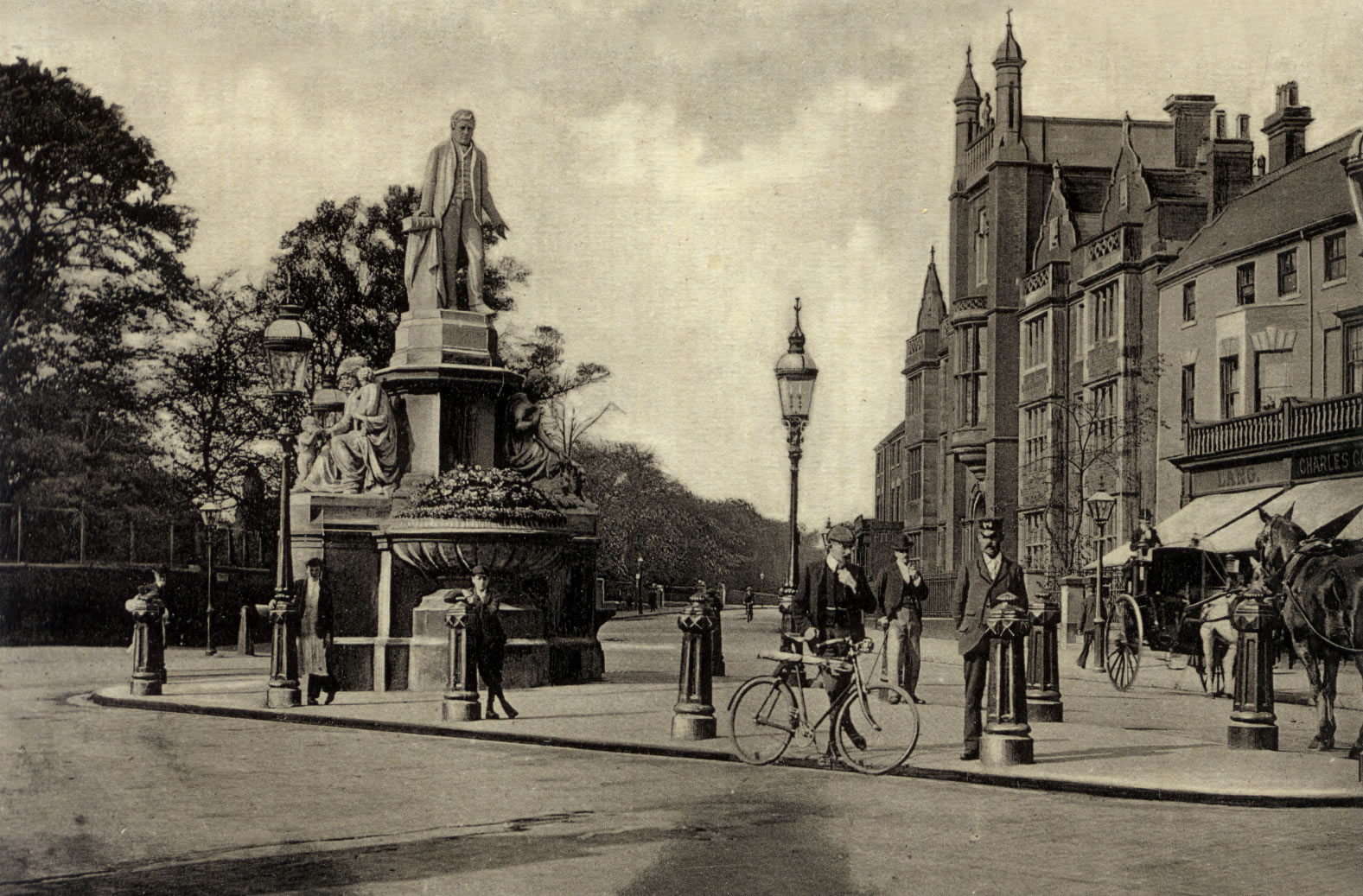 Seeing the Star of Barnet

The Map Explorer also has a very useful record set for exploring an ancestors' home from the period of 1910-1915. These are the Lloyd George Domesday Survey records that are being digitised by TheGenealogist and made available in the Map Explorer™. Using these recordsets in combination can give the researcher an added dimension to their ancestor's time. The Image Archive has many pictures of local landscapes, street scenes and churches where your ancestor may have been baptised, married or buried. Together these images, maps and records can build quite a picture of the town or general area that your past family lived and worked in. You may even be lucky enough to have had an ancestor make their home in a landmark building, such as an Inn or shop that had been photographed. Many shopkeepers posed for the photographer outside of their premises and so there may even be a photograph of the actual premises for you to find.

Taking as an example number 108 the High Street, Barnet which was the premises of an inn called The Star and run for many years by the same landlord, George Harriott and his wife Lucy. Using census records from TheGenealogist it is possible to find the Harriotts in 1871 incharge of the establishment and then again in the 1881 census when they were in their early thirties and living at the Star Inn along with their 23 year old barmaid Sarah Clark. George Harriott was obviously successful in his management of the Star as even by the time of the 1911 census, when he was a 64 year old widower, he was still the licensee of the same public house.

Star Hotel on the High Street, Barnet from the Lloyd George Domesday Survey

Using the Map Explorer to find the Lloyd George Domesday Survey records first enables us to see The Star pinpointed on the map in its environment on Barnet High Street. By then consulting the linked field book this reveals all sorts of residential details for the property. We can tell from one of the several pages dealing with the inn that it had 8 bedrooms, 3 bars, a large dining room, a kitchen, 3 cellars and a motor garage for 4 cars. They could also cater for horse drawn carriage trade as they had 2 carriage houses, a loose box and stabling for up to 6 horses. The bathroom on the first floor of the hotel, however, only appears to have had cold water taps, while other buildings in this survey indicate hot and cold plumbing had been installed by this time and there is only mention of one bathroom and one W.C. 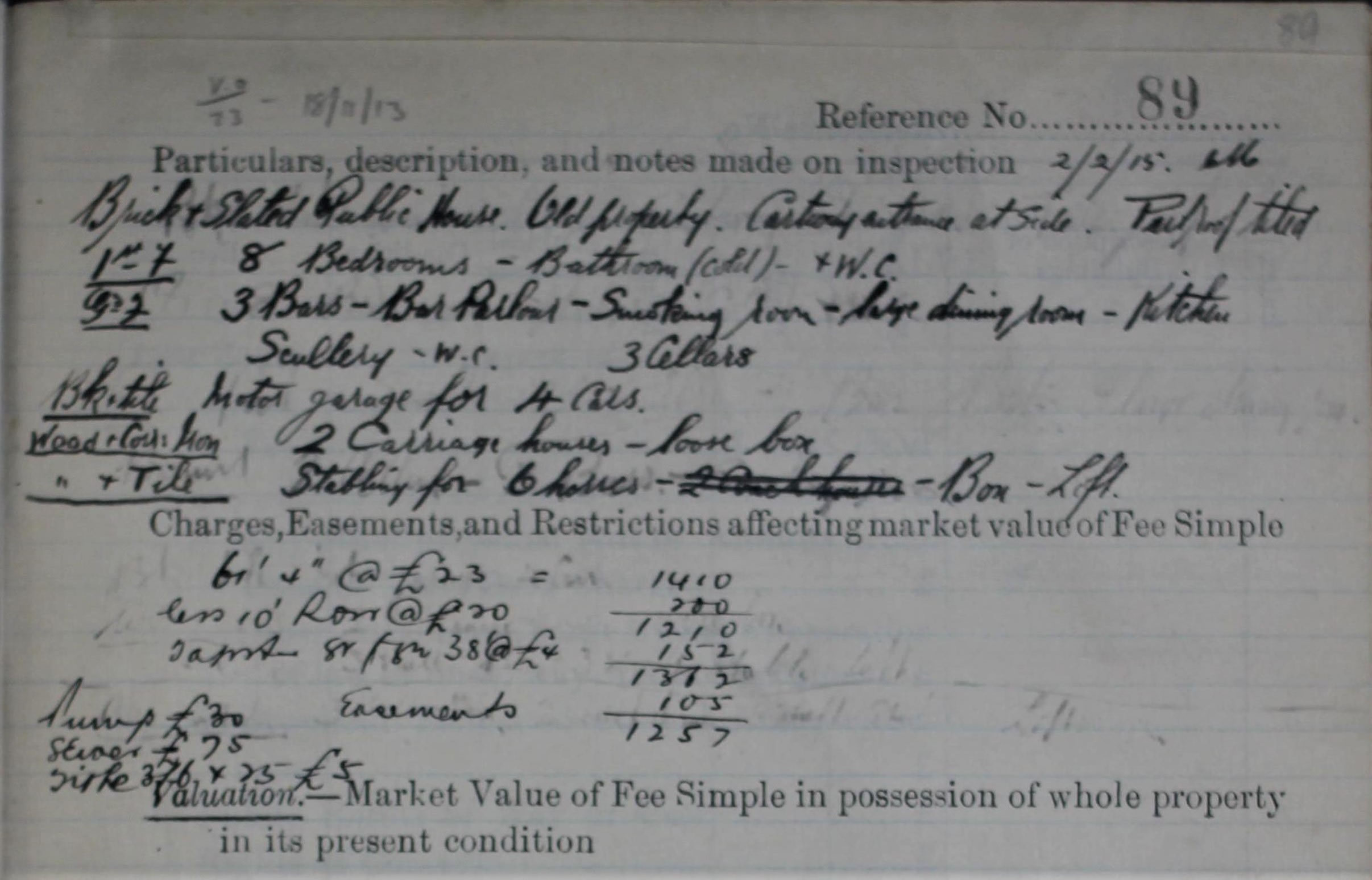 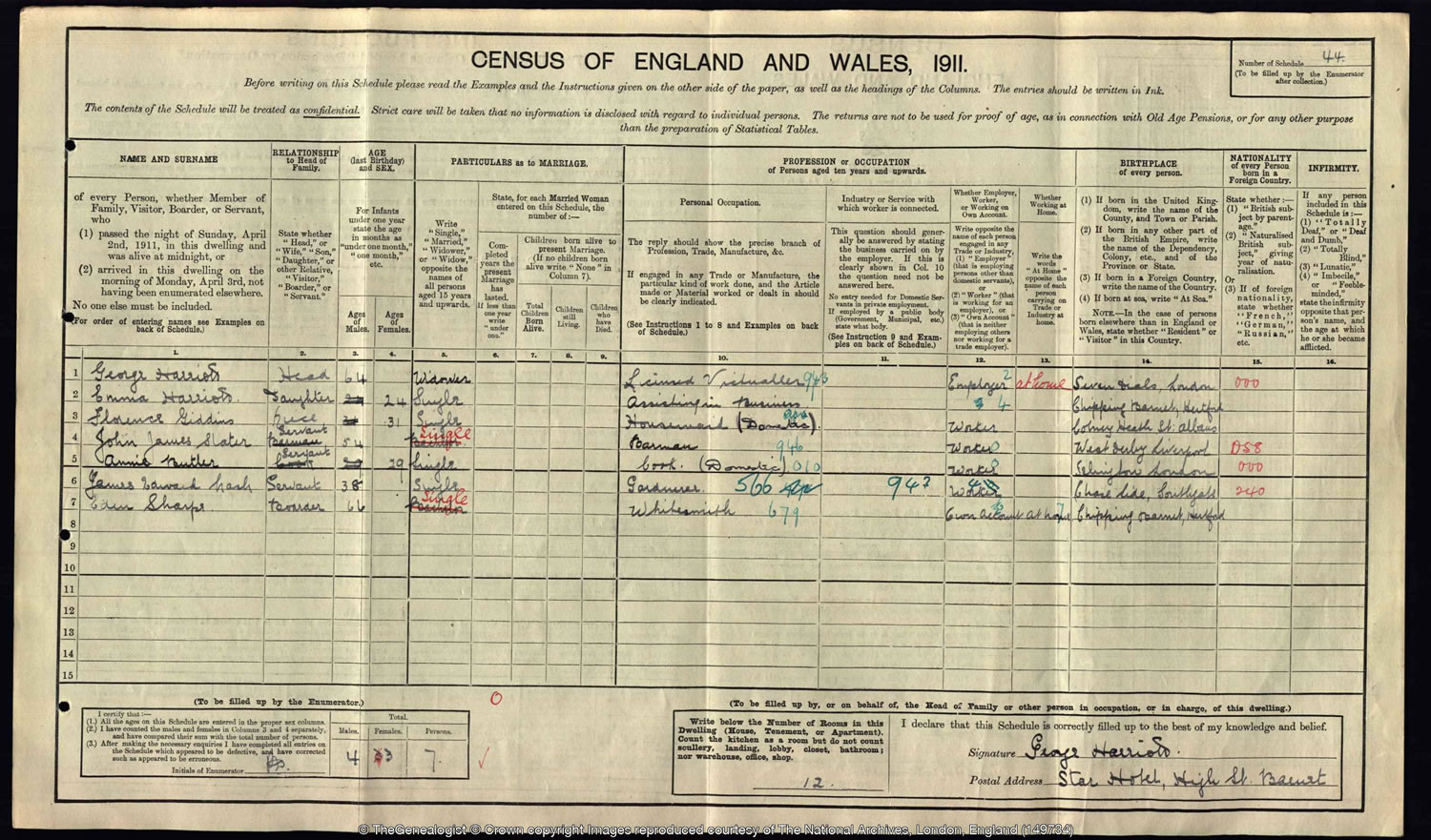 Changing the record set on the Map Explorer ™ to now view the Image Archive record we click through to view the old photograph from around the year 1905. Below this we are also given the photo position, the position from which the photograph would have been taken, along with a modern map and, where it is available, the modern street view. This allows us to compare the historical image with how the area looks like now. With this particular example we see that today there is a functional but unattractive concrete 20th century shop building occupying the footprint where, in Victorian and Edwardian times, there had once stood The Star Tavern. 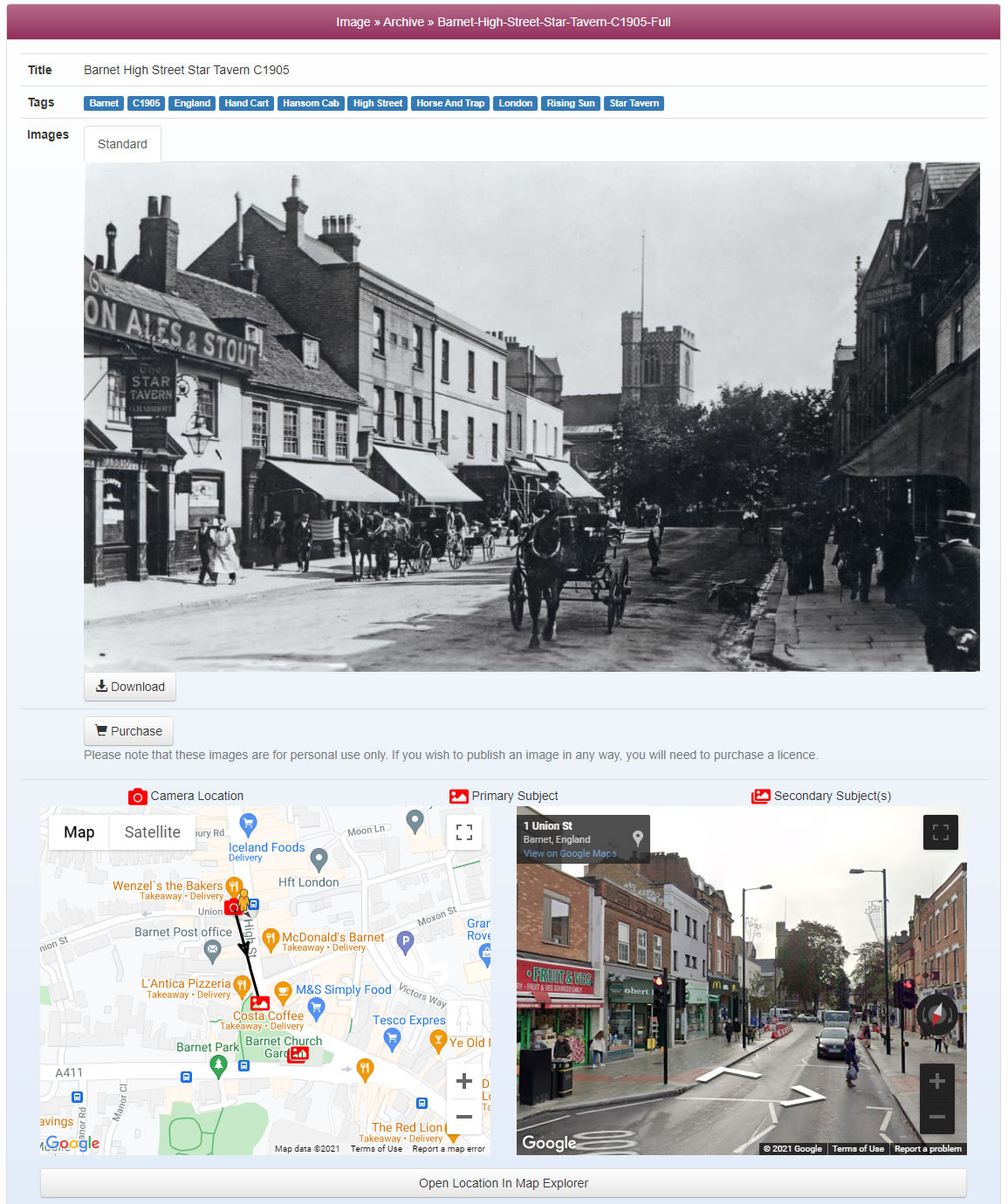 When viewing a record, you see the photo location, the photographer position, along with a modern map and street view (where available) enabling a comparison to be made of the image and how the area looks today

While it is not possible to step back in time to actually see their hometowns, through the eyes of our ancestors, this versatile tool can go a long way to helping us get some idea of where they lived and what it was like. Especially now that the extra feature of Image Archive photographs have been added to its already strong georeferenced mapping abilities.