Landowner and Occupier records for Harrow reveal schools, homes and other properties

Discover where your family lived...

Harrow School is a public school in Harrow on the Hill, Greater London, England and can be found in the latest release of property records on TheGenealogist. The school's past pupils include seven former British Prime Ministers of Great Britain. They were George Hamilton-Gordon the 4th Earl of Aberdeen, Spencer Perceval, Frederick John Robinson the 1st Earl of Ripon, Sir Robert Peel, Viscount Palmerston, Stanley Baldwin and Winston Churchill, as well as the one-time Indian Prime Minister, Jawarhalal Nehru. Many former and current members of both Houses of Parliament are alumni of Harrow, along with several prominent people in British society. 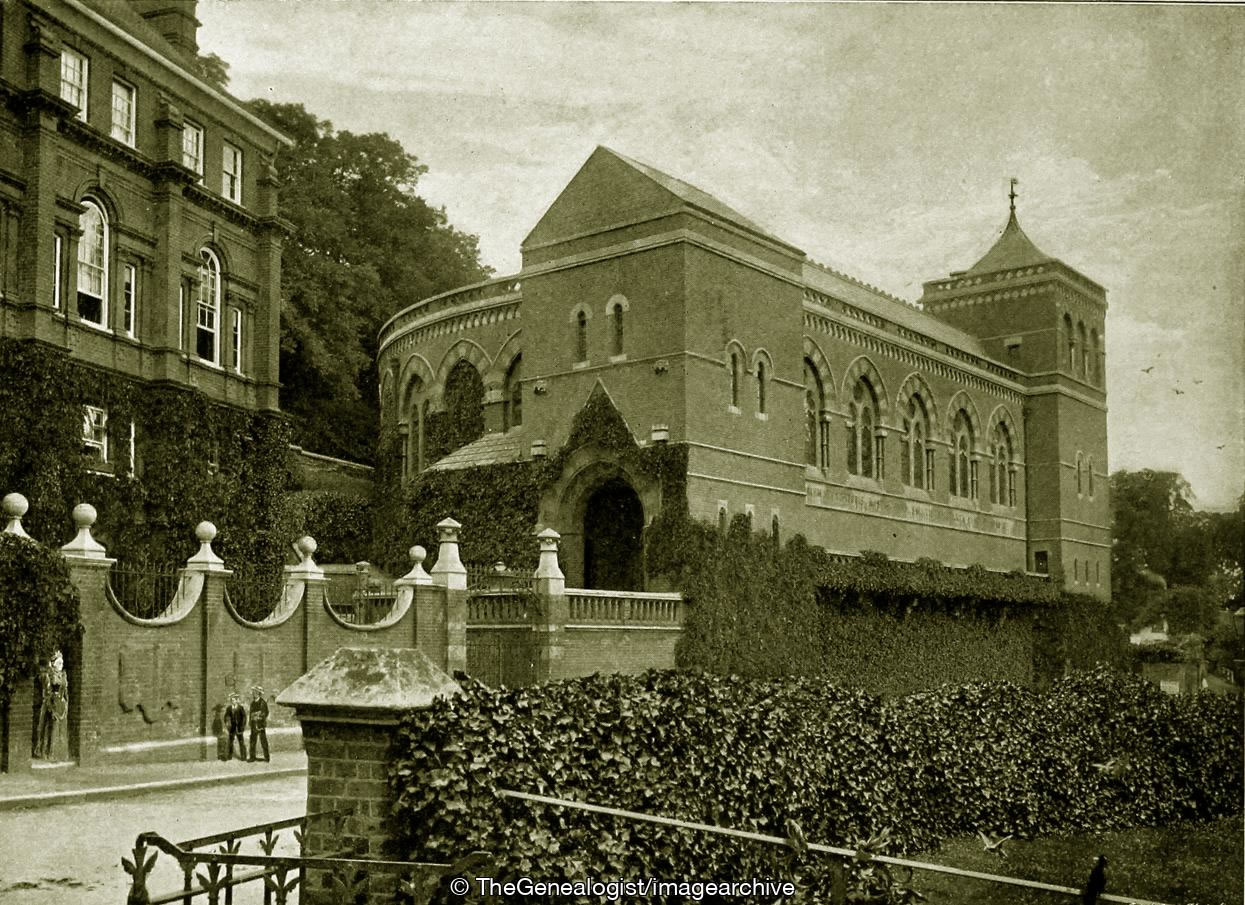 John Lyon intended that his endowment was to provide a free education for 30 (afterwards extended to 40) poor boys of the parish. However the School Master was permitted to accept "foreigners" (boys from outside the parish) from whom he received fees and thus the idea of a boarding school took hold. Today Harrow has approximately 820 boys, all of whom board full-time.

In 1876 the Governors of Harrow School established another school to provide a modern education for local boys. This establishment is now known as The John Lyon School and it is a prominent and highly academically selective independent boys and girls' school; though it remains part of the Harrow School Foundation maintaining close ties to Harrow School. 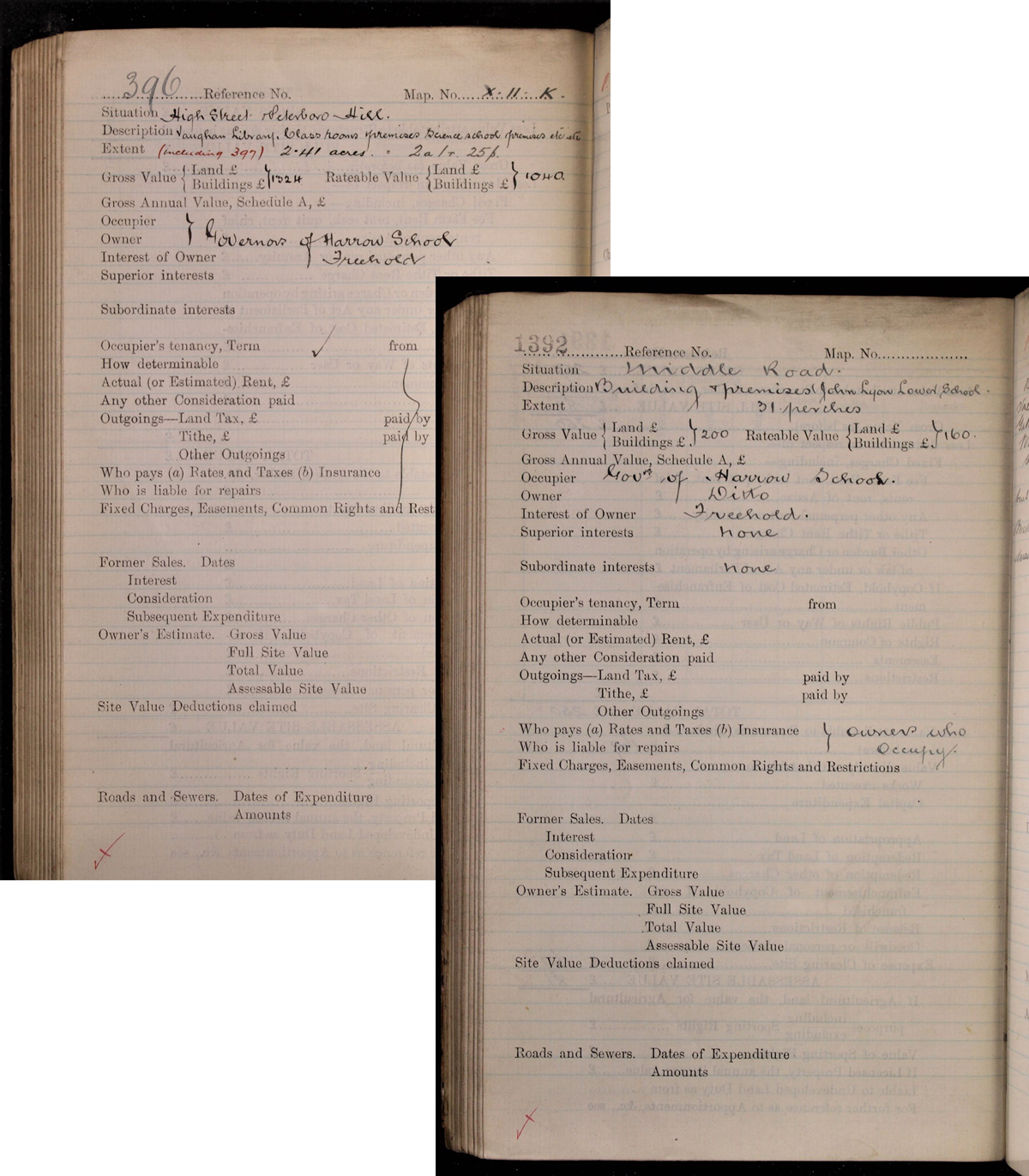 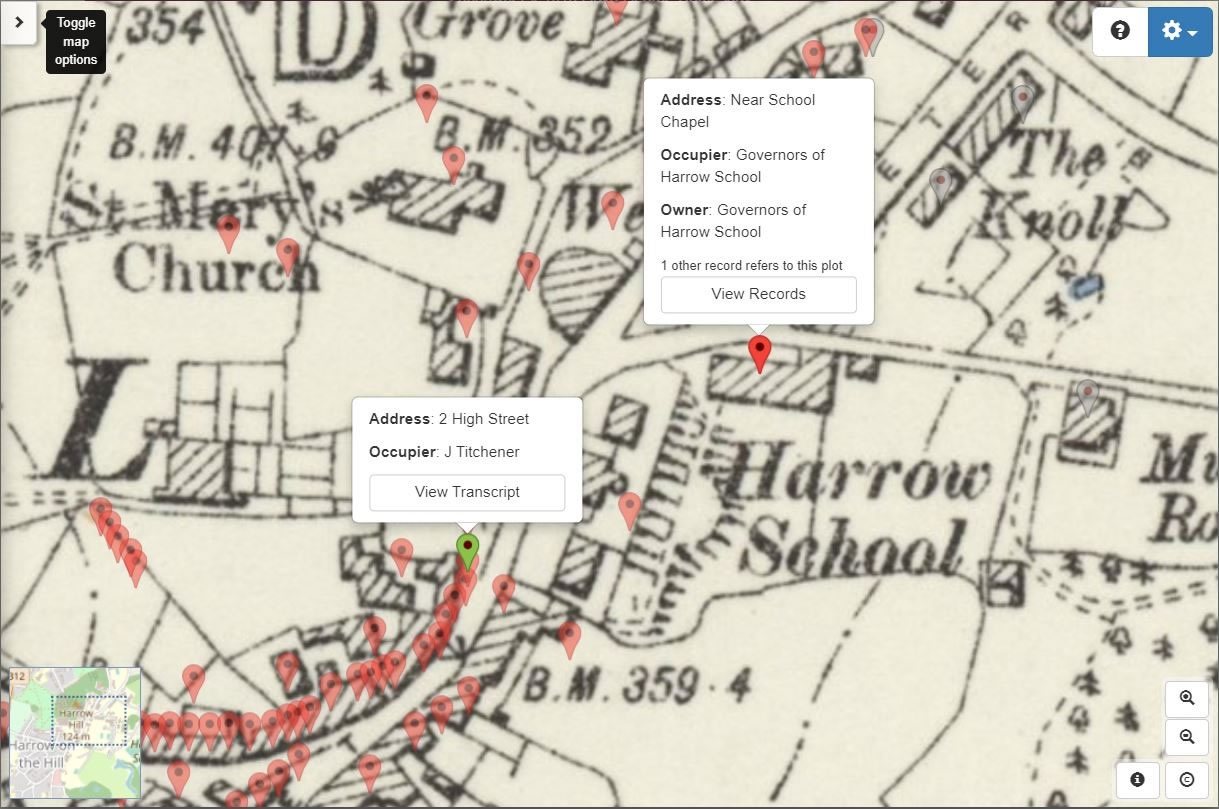 The Governors of Harrow School were also owners of various properties in the town and we can see one example of a house that they owned in the High Street where the IR58 Field book reveals some interesting details about its condition. Number 2 High Street was most likely a house opposite the Headmaster's house at the top of the High Street in Harrow on the Hill, though this building is missing from the modern maps suggesting that it has been demolished in the intervening years.

The surveyor had noted in the description of the property that it was an old building of brick and tile. He notes that the tiling was modern and the brickwork on front and back appeared to be comparatively modern to the time in the 1910s when it was surveyed. But it is his observation that the floors were "shaky and the plastering defective in many places" which paints a picture of a not too sound structure in need of some maintenance, though he does say the property is in good decorative repair!

It is the likes of gems such as these that appear in the field books which reveal valuable information about individual properties that our ancestors may have lived in at this period of time. In this case we are also treated to a colour plan that the surveyor had bothered to sketch and which adds to our being able to better picture a building that no longer survives today. 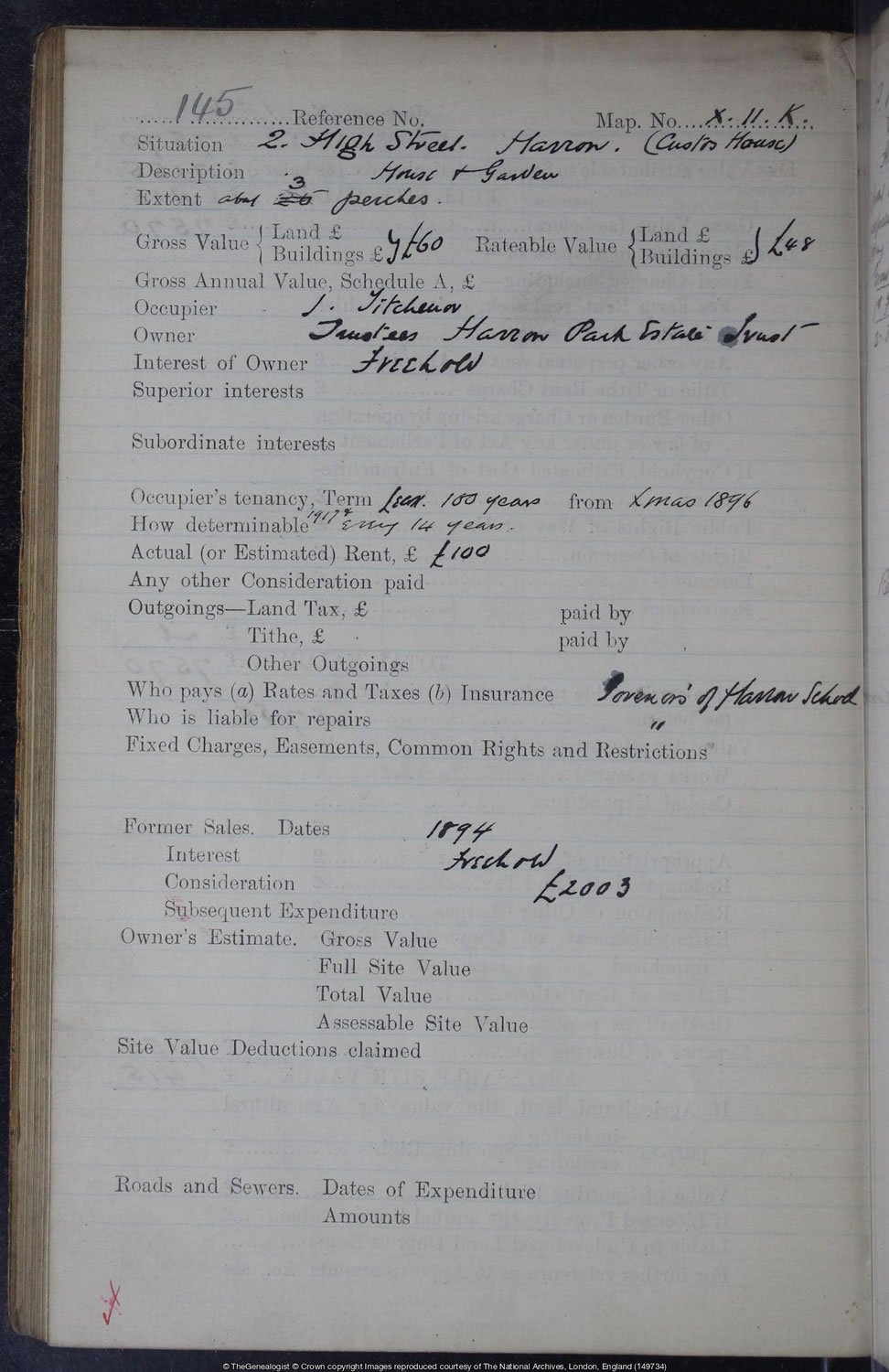 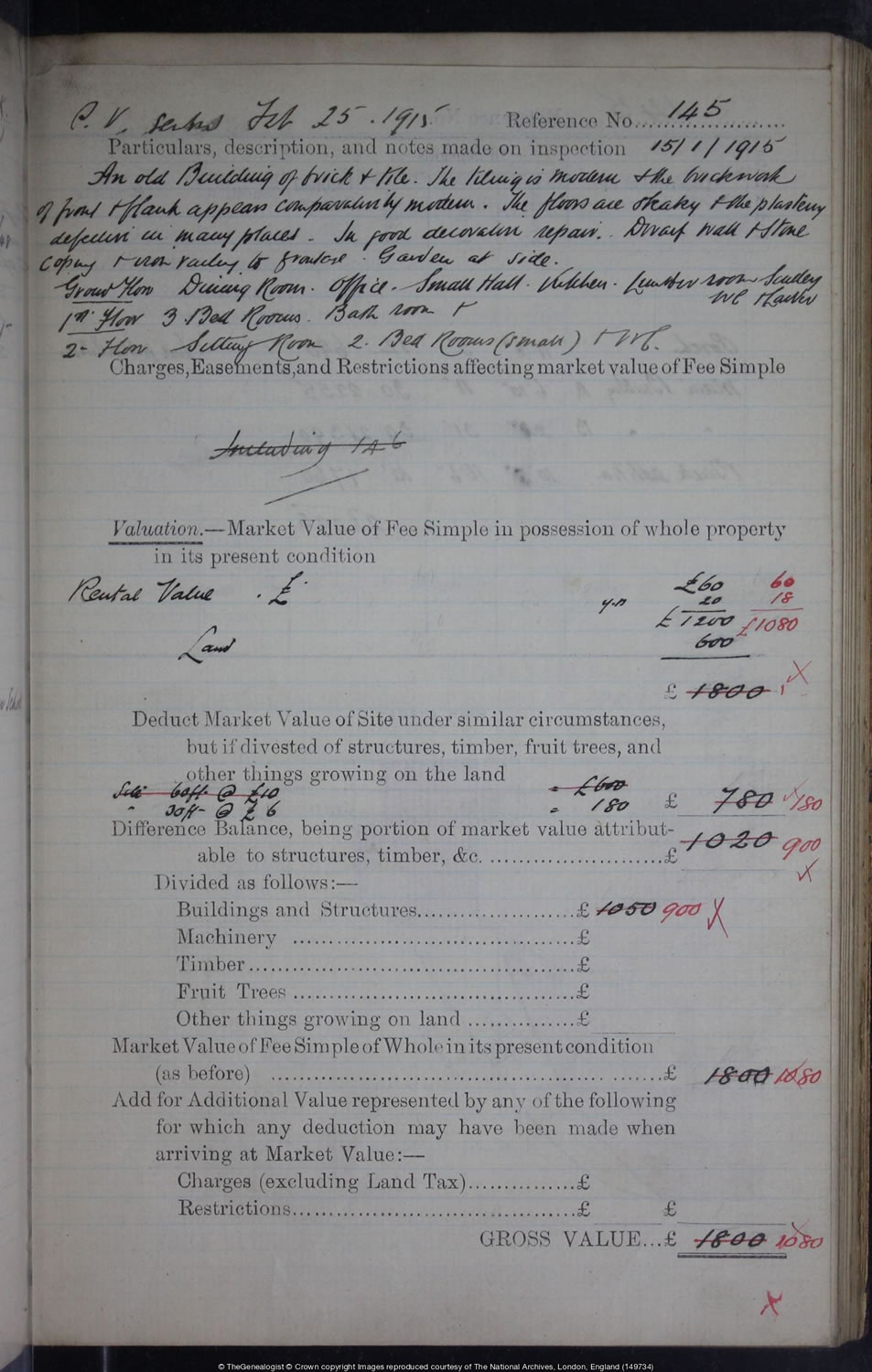 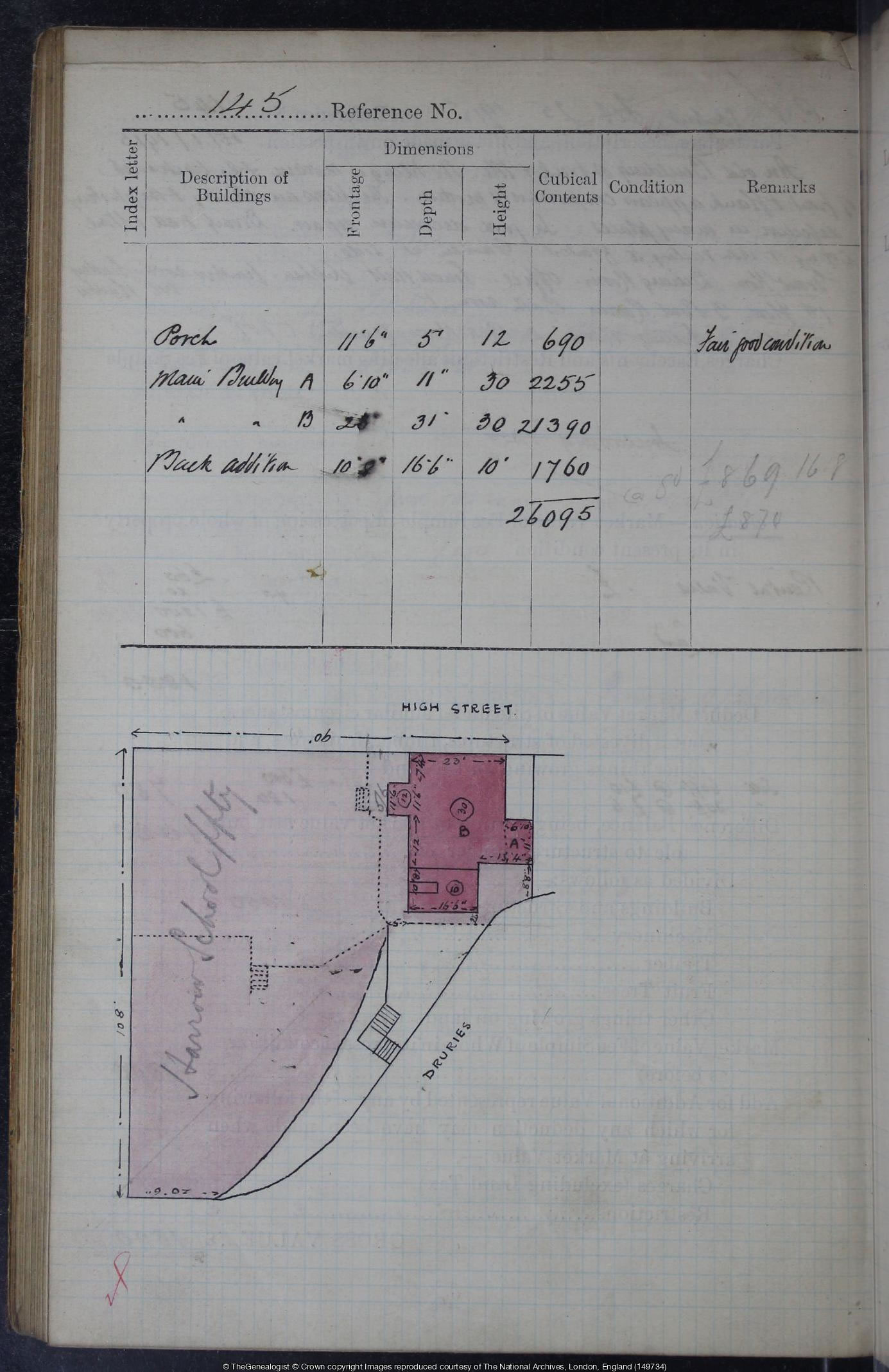 Landowner and occupier records such as these taken from The National Archives' IR58 are a boon for the house of family historians wanting to learn more about the properties that their forebears may have owned or lived in. With their release on TheGenealogist they have been made searchable by name or by keywords using the Master Search, or by selecting a pin from the map displayed inside the powerful Map Explorer™. This latter interface allows family historians the ability to switch between georeferenced modern and historic maps and so to gain a better understanding of the neighbourhood in which their ancestors from 1910 had lived or worked and also to see how it may have changed in the intervening period. 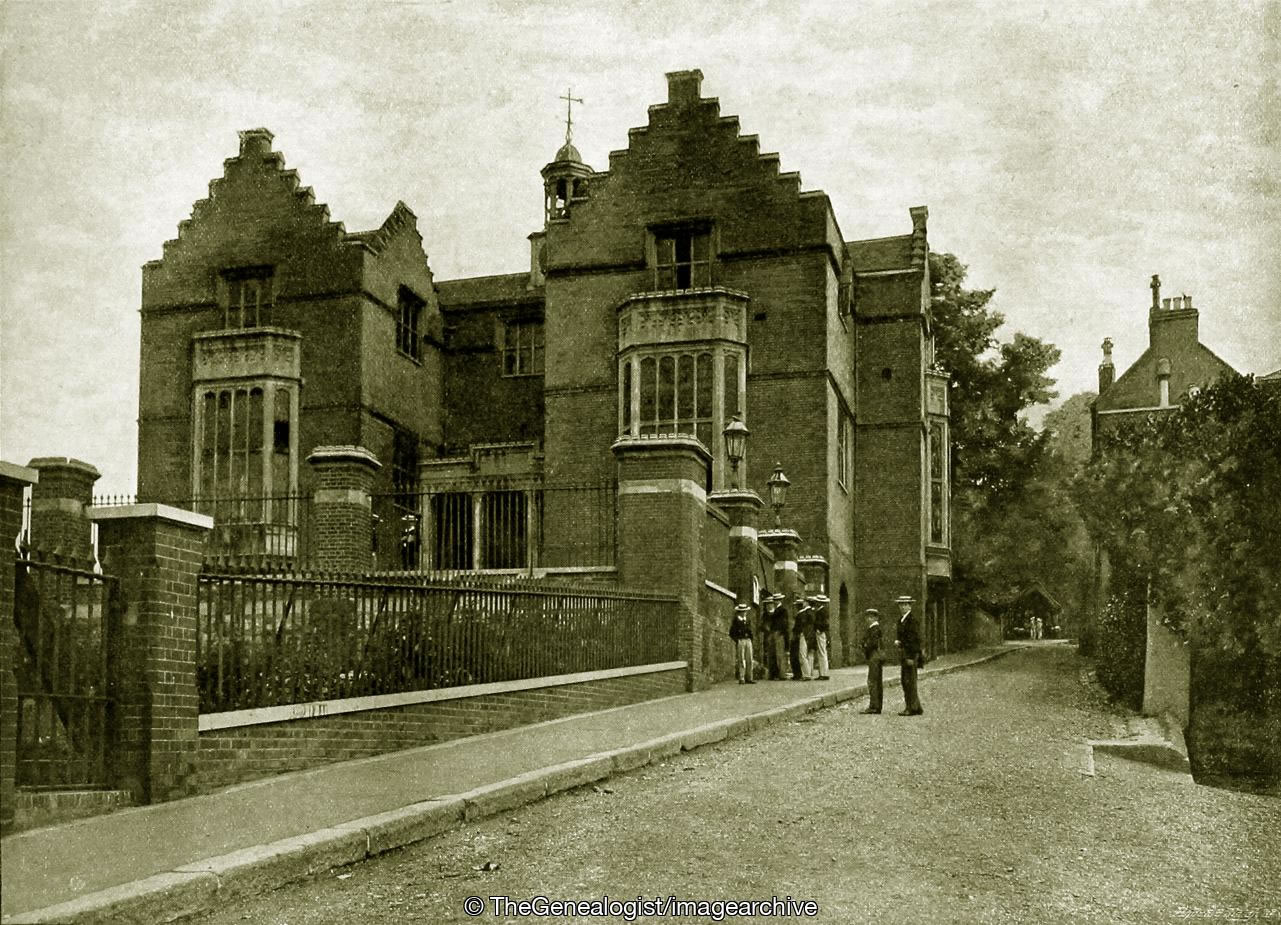