Discover where your family lived...

One of the most fascinating aspects of researching our ancestors is finding out about where they lived. Records that give us an address allow us to do this and with the intelligence that these provide our next move is often to turn to a map. If the recordset is linked to mapping this is even easier for us as researchers however not all maps are equal. Thankfully TheGenealogist has addressed this with their recent update to the 1939 Register by linking all the results from this pre-WW2 survey to its preeminent Map ExplorerTM interface. Using this tool we are now able to see more accurately where our recent ancestors' house had been situated on maps that will go down to street or parish level and so giving the researcher a great deal more detail than on most of the other sites that allow a search of the 1939 Register.

In 1939 the government needed to roll out identity cards and ration books for the public. To do this they recorded every civilian member of the population on a specific date and so created a record of where people were on the 29th September 1939. Those already in the military would be in the records of the armed forces and so would not be captured in the 1939 Register unless they were visiting on leave, but as conscription had not yet begun it would still be possible to find many of our family members wherever they were on that day in September 1939.

Searching for where ancestors were in 1939 is easy

A search of the 1939 Register for an ancestor may be done from TheGenealogist's Search page using the Master Search. If you know the date of birth of the person you are looking for then use this in the Year of Event and select Birth or Baptism as the filter from the dropdown menu. An alternative way of searching is to scroll down to the individual recordsets and select 1939 Register which will give you more options to choose from including keywords, day, month and year and a more detailed selection of address, county, borough or district.

As an example if we search for Wilfrid Hyde-White, the British character actor of stage, film and television who went on to achieve international recognition for his role as Colonel Pickering in the film version of the musical My Fair Lady. We are able to discover just where he was on the day of the compiling of the 1939 Register. From previous research that we have done we know that his birth date was the 12th May 1903 and that he was the son of a Church of England Canon, the Rev. William Edward White. As his actual surname was simply White – Hyde-White being his stage name in which his middle name and surname were put together and hyphenated – we will search for Wilfred H White together with his birthday, month and year. 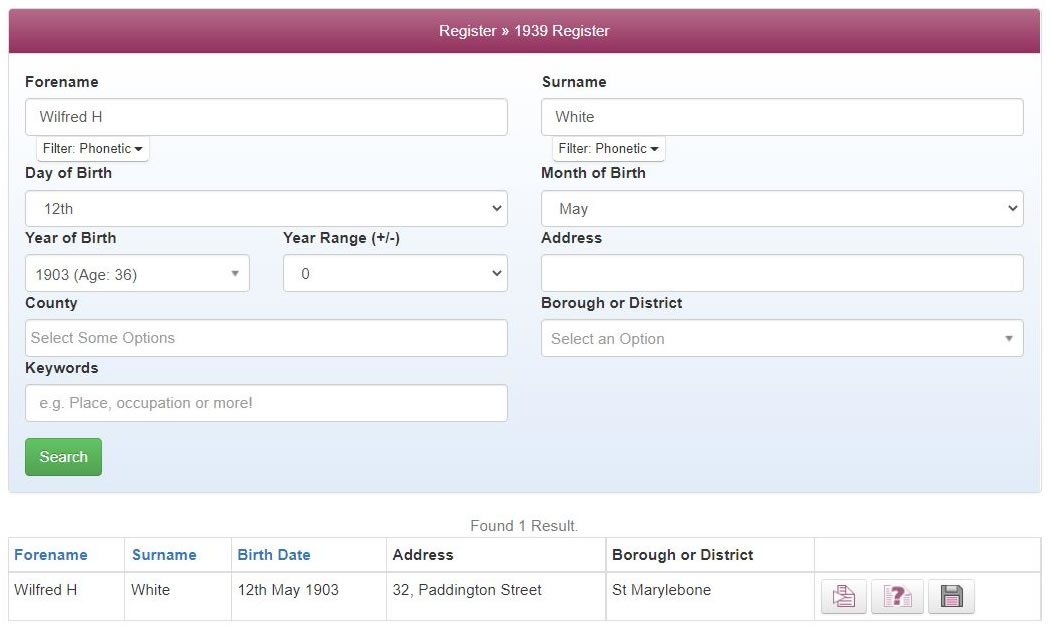 Opening the full transcription details allows us to see directly underneath the result for our actor's household a map of the area. In London, where TheGenealogist's 1939 Register will very often identify down to the actual building plotted on a large scale map, we can find Wilfred H White recorded at 32 Paddington Street in St Marylebone. 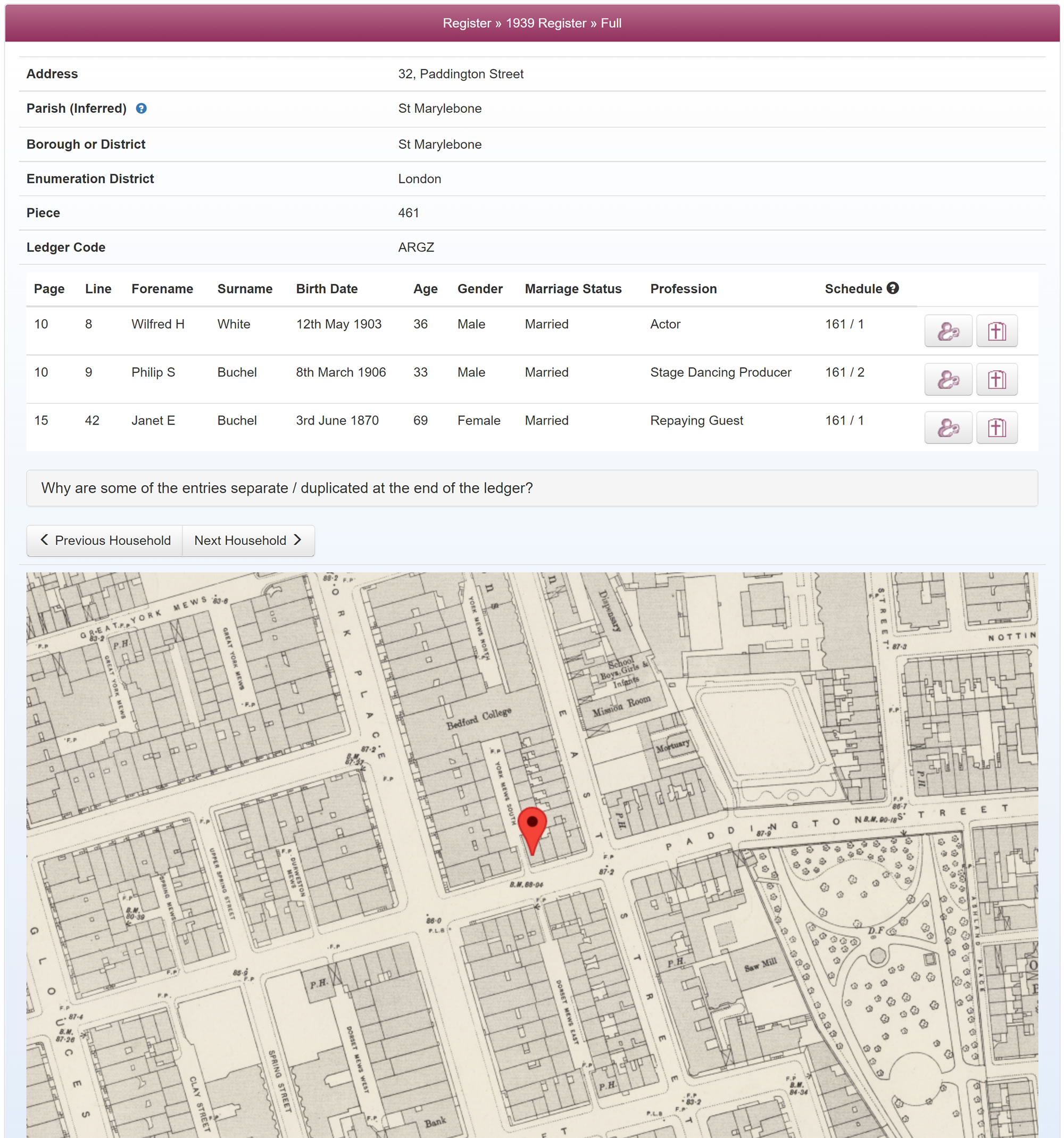 To discover more, and to look at the neighbourhood in which he lived, we need only to now click on that preview map which will take us to TheGenealogist's Map ExplorerTM and this will provide a great deal more detail than on most of the other genealogical sites that feature the 1939 Register. 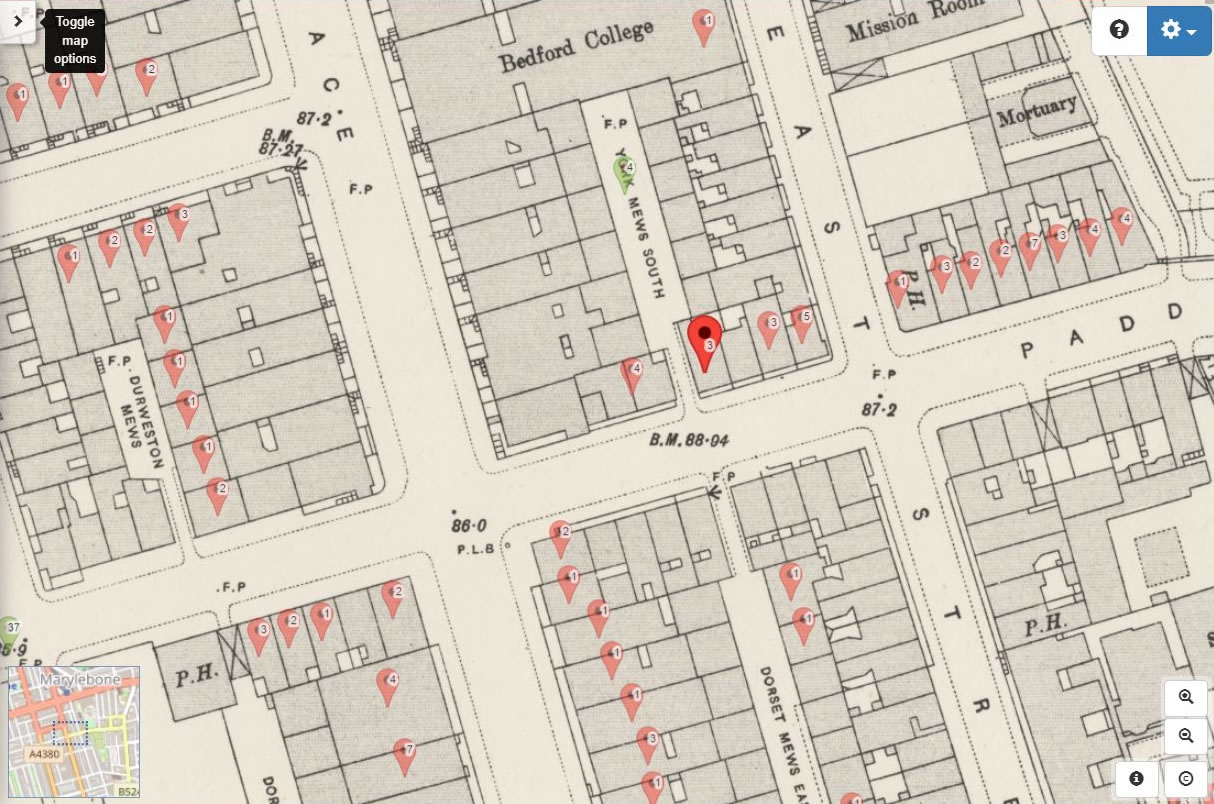 See where they lived on historical or modern maps

Because the 1939 Register is now linked to Map Explorer™ it allows us to examine the area where our recent ancestor lived on a series of georeferenced historical and modern maps including a Bing Hybrid and satellite map. Searching for another example, this time in Oxford, here we can find that the famous author and academic, J.R.R. Tolkien, was to be found living at 20 Northmoor Road in 1939. 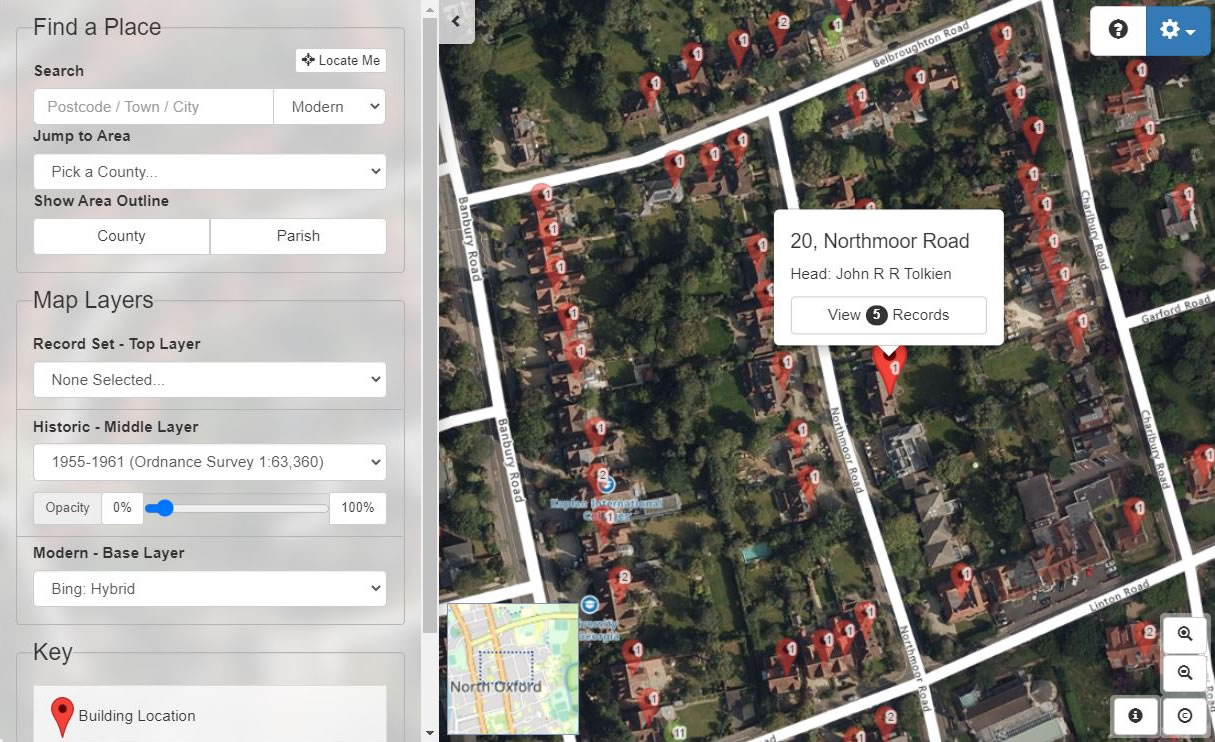 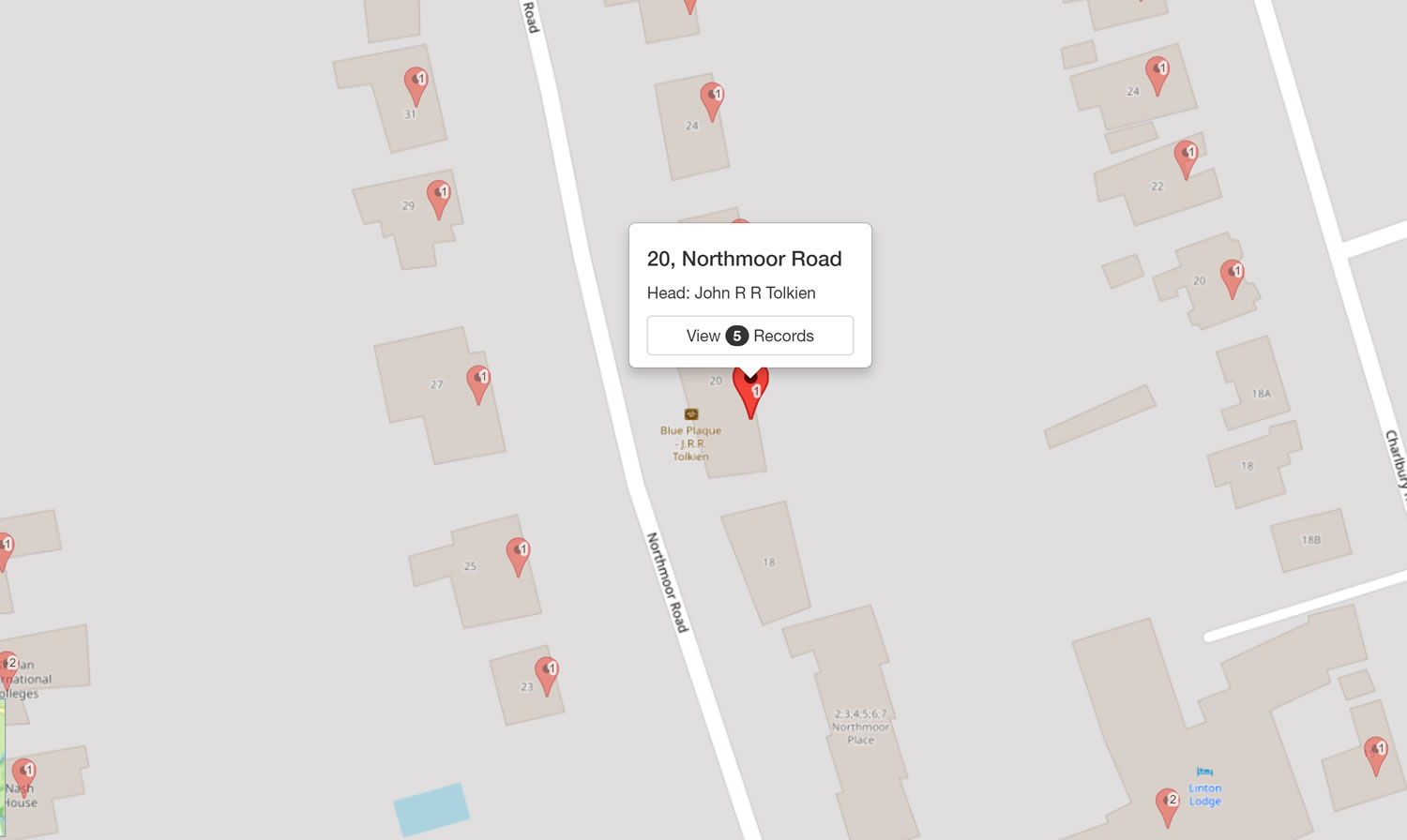 Modern and historical maps are georeferenced in the Map ExplorerTM

In the countryside the results from TheGenealogist's 1939 Register will typically show the property down to Parish level. If we do a search for one of the biggest box-office draws and movie idols of the 1930s, Leslie Howard, then we can find him and his household in the semi-rural environs of Surrey just as the war that would take his life away was beginning. We can see his son, Able Seaman Ronald M Howard, was recorded in the house along with another from the Royal Navy. Perhaps Ronald was home on a visit and had brought a friend. Serving military personnel were usually only featured in the 1939 Register when they had been on leave. Leslie Howard's son Ronald would later go on to be an actor, like his father. 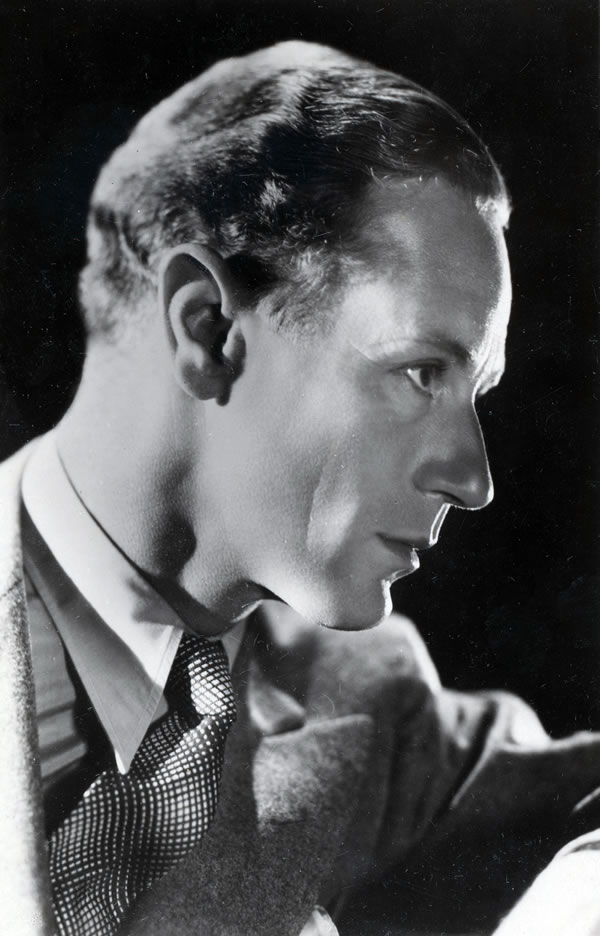 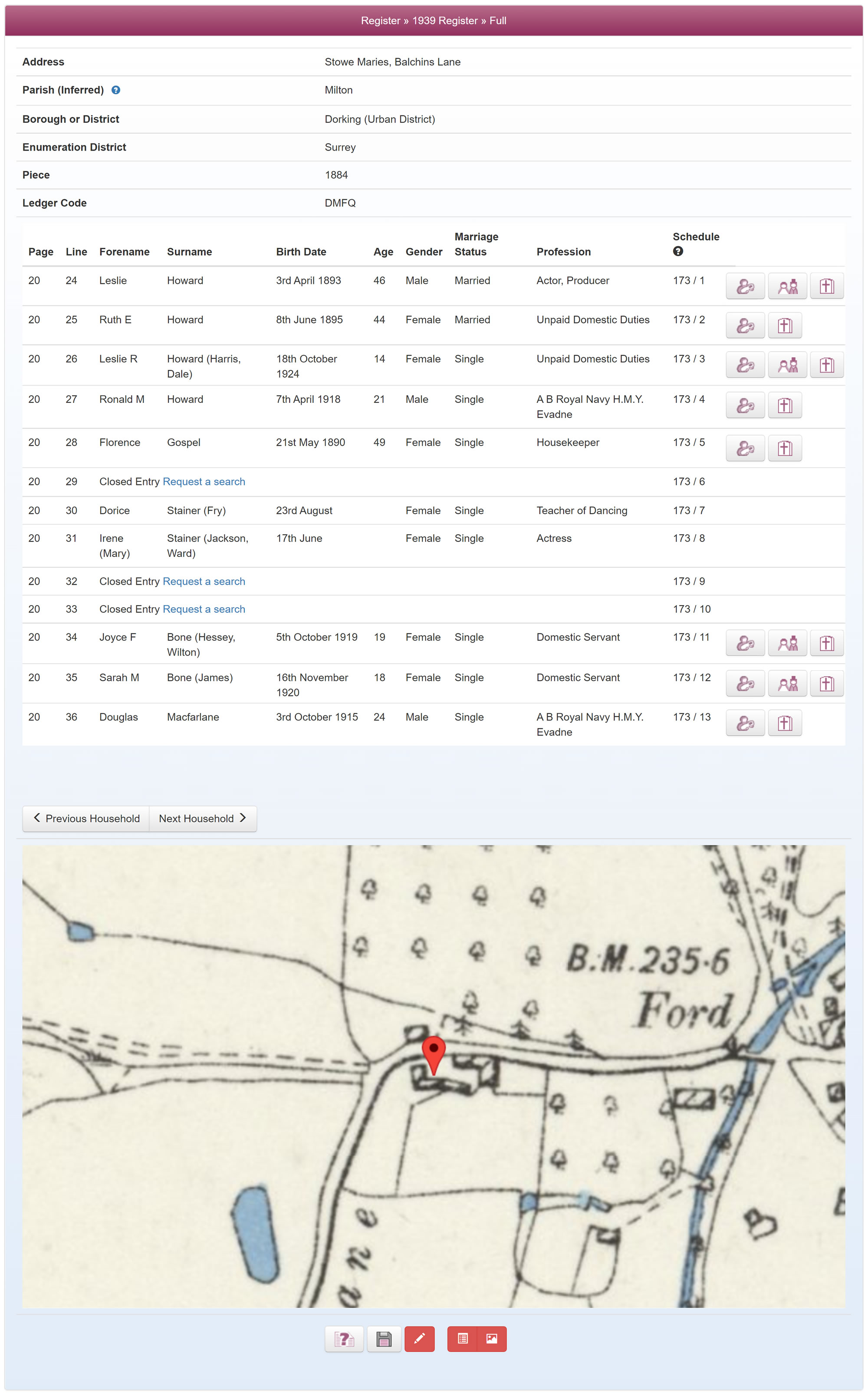 Leslie Howard and the household in the 1939 Register on TheGenealogist 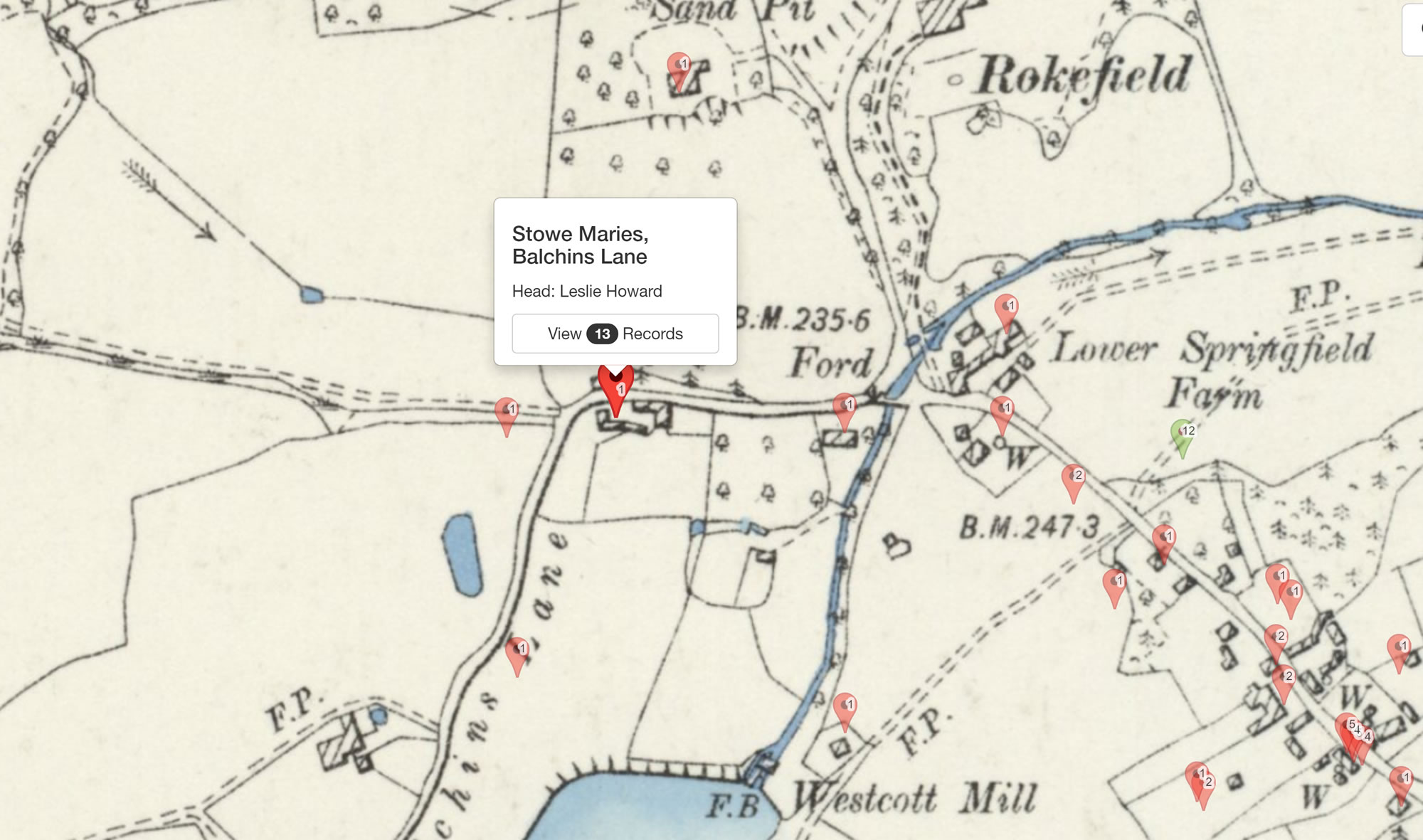 The household shown with other households surrounding them

Leslie Howard was known on both sides of the Atlantic starring in Gone with the Wind (1939) and in the film version of Berkeley Square (1933), for which he was nominated for an Academy Award for Best Actor. He also played the title role in The Scarlet Pimpernel (1934), which is considered by many to be the definitive portrayal of the part.

In the Second World War Howard continued to act and make films including several anti-German propaganda movies and he took part in bolstering support for the Allies where he could. There were rumours that he was also involved with British or Allied Intelligence, sparking conspiracy theories regarding his death in 1943 when the Luftwaffe shot down BOAC Flight 777 from Lisbon to Bristol when it was in the Bay of Biscay. Howard was a passenger on this flight, though there were also others onboard who may equally have been the Nazi's target. There is controversy over the claim it was deliberately singled out for attack as well as that Gorbels had ordered the downing of the commercial flight because he had been ridiculed in one of Leslie Howard's films and had thought that Howard was the most dangerous British propagandist and so wanted him killed.

Whatever the reason, on 1 June 1943 the Douglas DC-3 and its Dutch flight crew, now working for BOAC, were attacked by eight German Junkers Ju 88 fighter planes and crashed into the Bay of Biscay. All 17 people on board perished a world away from the pleasant country lane that we are able to tell from the Map Explorer that Howard and his family had lived on at the time the 1939 Register was taken at the very start of the war.

The 1939 Register, when linked to a more detailed mapping tool than can be found on other providers' websites, is a fantastic resource for family historians searching for where forebears lived in September 1939 just as the Second World War had begun. In London we have seen that it can locate down to street level and in other large towns and cities it will also often find the street while in the countryside, where named or numbered properties are less frequent, it will default to Parish level rather than the broader registration district that other websites show. Family history researchers will find that TheGenealogist's 1939 Register with its multi-layer mapping is a hugely valuable resource to locate their recent ancestors.